At last I am back digging in the garden after a brief spell under the duvet during the recent awful wind and rain and I was kicked into action by the kind of gift every gardener loves ….. several boxes of plants dug up and divided by another gardener . 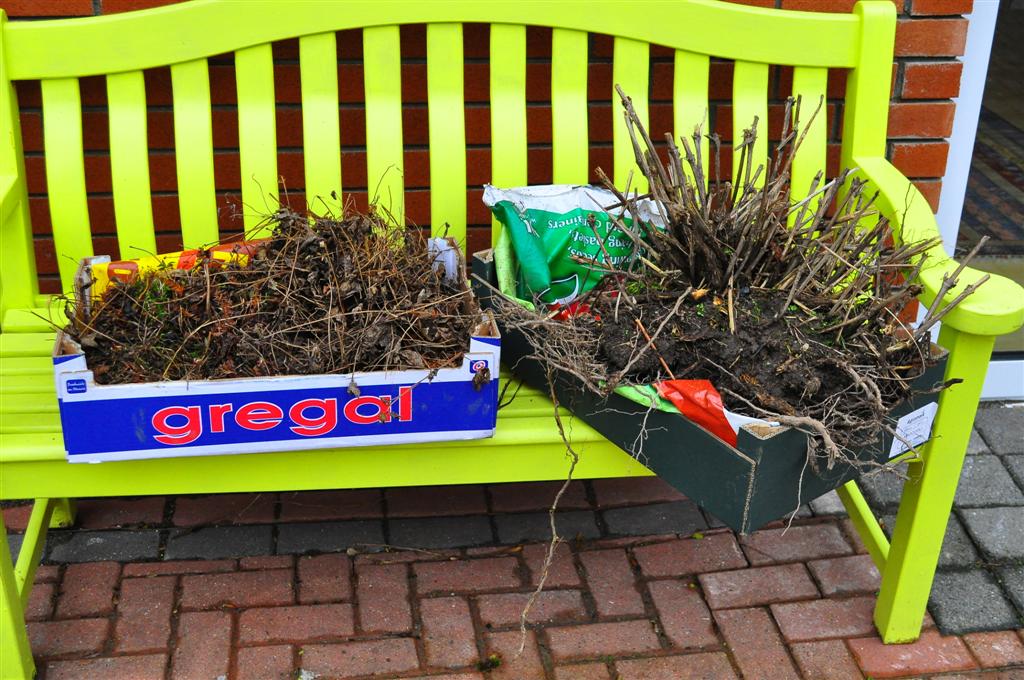 My gardening friend brought along some of my favourite plants which  have become congested  in her own garden , dermera and giant primulas  which will go into some wet areas and a beautiful geranium which I had admired in Altamount Garden in Wexford during a visit there last summer . There is also a huge clump of geranium which I will be able to split into even more plants for planting in dryish areas plus a large clump of perennial clematis which I have seen in other gardens but never grew myself as it is rarely on sale in garden centres and your only chance of getting it is through the generosity of another gardener . This clematis is not a climber and grows to about one metre in height like a normal border perennial .

During the week I was asked in an e mail by a friend from Cavan for help in selecting some plants and trees for the garden around a newly built house specifically on sloped areas at the entrance with the usual brief from new or reluctant gardeners in that it be “ maintenance free ” . That I find is the mantra of all reluctant gardeners , maintenance free , and there is no such thing really as there is always something that needs to be done especially in the first few years of a new garden until it gets established such as weeding , watering in dry weather etc.

The biggest problem with whatever you plant will be weeding which requires maintenance or it will get overgrown very quickly and look unsightly . Also being the first thing you will see on entering the garden it will be important to get it right .Every non gardener wants ” maintenance free ” but in my view along with that you get a supermarket or car park look i.e. industrial with no flair which you will know from your interior designing days you will want to avoid .

Don’t rush anything and a good way to start is decide the size of the planting area and mark it out on the ground in outline with a rubber hose and move it around until you are happy with the shape and dimension ….. two options then before planting , either spray off the grass and weeds with round up in late Feb. and repeat after 5 weeks when all growth will have yellowed until you get a weed free base to start with ….. or and this is an expensive option but one that long term may suit you as it does make it fairly maintenance free … after spraying use a liner called mypex , a plastic membrane and cut it to the size of the planting area , select your plants ( which I can help with the selection ) , cut slits into the membrane and plant into the soil underneath … the entire surface is then layered with either gravel or bark mulch to hide the black membrane and give a more pleasing look and of course this means no weeding apart from the odd bits that peep through the planting holes .

A classic look would be underplant with spring flowering heathers and here I would use only one variety …. WT Rathcliffe … as this after white flowers Jan/ April will clump up into a nice ball about 18 inches wide and high and looks great in all seasons …plant about a metre apart and plant white silver birch var. jacquemontii through the heathers in groups of uneven numbers i.e. 3 , 5 or 7 and this gives a very dramatic and natural  look as it mimics nature and what you get in the wild .

For the experienced gardener this scheme is very 1970’s as it was widely used and some would say over used back then  and got slightly jaded but in my view it is simple and natural and more importantly will deliver in all seasons of the year .

Due to the almost month long rain we have seen in Ireland this past while it has been impossible to put a spade into the ground throughout a lot of the garden so water logged has it become and apart from that one morning when I planted up my donated gifts , my daily forays have been confined to pruning . Today it was the turn of the tall miscanthus grass clumps which even though still looking good with their structure of white fronds from last years growth needed to be cut back . There is a balance to be struck between plants that retain a good structure throughout the winter and when you cut them back as leaving it too late , tempting as it is in the case of the miscanthus which still looks great , will slow down the new growth and then if you cut will actually cut the new growth so bye bye miscanthus stalks today ….. but it is a great plant that earns its keep every year with little attention needed apart from its annual spring hair cut .

Another job I have had to postpone due to the wet weather is giving the shrubberies a good  late winter spray of round up and I find doing this in February before the new growth starts means that you can get in at the couch grass that invariably grows around the base of the shrub and is difficult if not impossible to get rid of otherwise while also lessening the risk of damaging the host plant by spraying any new leaves as they won’t have unfurled yet . Nobody likes round up usage in the garden but it is a necessary evil with a big garden and I find it makes all the difference if you can kick start the new season’s growth relatively weed free .

This week I saw the first flowers of the  snow drops , galanthus nivalis , while the early daffodils are up in many places throughout the garden but are not yet in flower . I don’t have many snow drops as they need dryish ground whereas our garden is bordering on the wet land which doesen’t suit but I have several clumps and keep meaning to plant more . The best time to plant snow drops is just after they finish flowering by dividing some established plants as I find buying them later in the summer as bulbs is not as good and they can be problematic . The snow drop is a shy little plant and keeps its head down so that you need to get down on hands and knees to really appreciate its beauty . 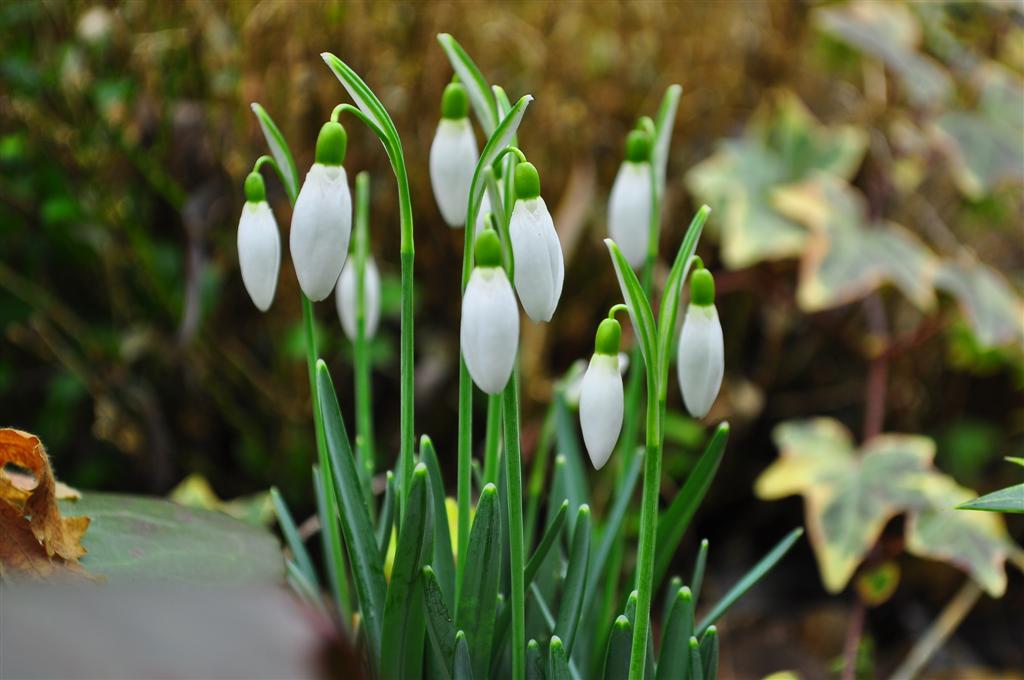 While in the supermarket today I saw a huge display of cut daffodils for sale , dutch grown under glass for sale at this time of the year , sad flowers that have never seen the outside of either a glass house or a shipping container , forced into growth for our enjoyment they last five / six days indoors and then end up on the compost heap . I never cut flowers from the garden for use indoors as I enjoy them too much in their natural environment and as they come back year after year without complaint I feel we owe it to them to let them enjoy their moment of glory !

Plants like the hellebores are meant to be enjoyed outside and I would really hate to cut them for indoor display . 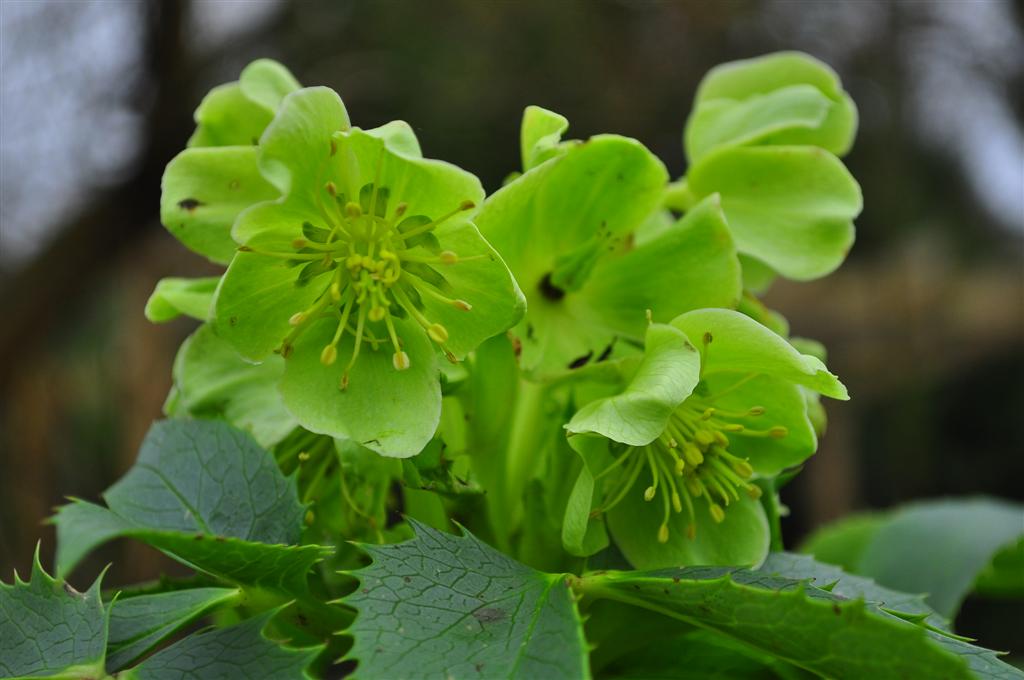 Years ago a third cousin of mine , working as a journalist with the London Evening Standard , interviewed the great Irish playwright , Sean O’Casey , in his London home  . During the interview he remarked that although he knew O’Casey loved gardening  he was surprised that there were no cut flowers on display in the house and the great man replied “ I love my children too but I don’t cut their heads off and put them in vases “ .

I was reading this week a book by Germaine Greer , “ White Beech , the rainforest years “ , telling how she has been reclaiming and restoring  a rain forest tract of land  she has owned in Australia for the past 20 years and how hard it is and has been to maintain a proper balance in nature and this quote from the bould Germaine is so true  “  the much vaunted equilibrium of the rain forest is actually a state of constant war “  .

Constant war , well said Germaine  ! I believe that if you leave a garden without regular maintenance it will revert within three months to total wilderness ….. so get  the round up sprayer ready for the first  attack of the new season folks !

Spring  is here ? Doesen’t feel like it but first of February , Saint Brigid’s Day ( if you are Christian or Brigit’s Day if  pre Christian pagan !) is traditionally the first day of Spring in Ireland … something my Bosnian friends could never understand as Winter is only getting into its stride around early February in the Balkans with some of the worst snow and ice still to come .

But for me First of February has always been the first day of Spring and even if imaginary I still can sense the start of a new growing season !