This September we have been paying for the drought conditions we had during the summer and the weather has been generally cold and wet but growth has been good and as I was away for the first part of the month it has been catch up time with the grass . I use a ride on mower which mulches the grass and doesen’t collect which is great if you are cutting regularly but with any type of longish grass such as I faced when I came back it needs to be cut at a high setting and gradually lowered over the next two cuts , takes patience and as Pat Cleere who looks after the ride on says , if you can see grass clippings you are cutting too low . When I started gardening I always regarded a ride on mower as the sign of a lazy gardener and preferred the exercise of pushing a hand mower but quickly changed my tune here when with eight acres it was taking me twelve hours a week to cut the grass so now I only cut two areas by hand as these are a bit inaccessible for the ride on and are small and have quite a few trees which makes it difficult to manouvere around and OK I have to admit it I am getting too old to push a mower around for a long period plus I always found cutting grass to be intensely boring and could never stand it for more than an hour ! 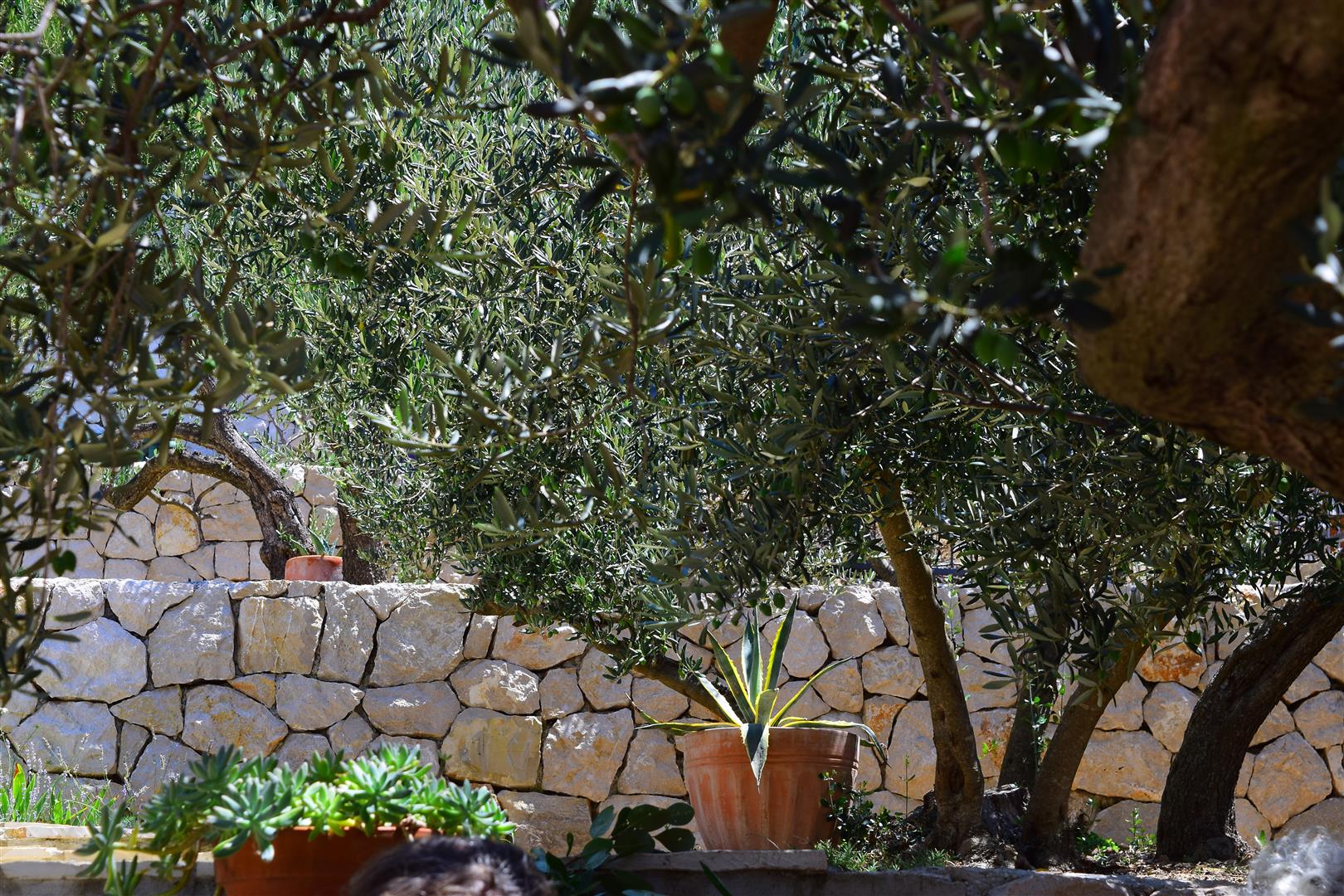 I have been working on and off over the past two years establishing a garden in Croatia on the Adriatic coast and it has been a steep learning curve where the extreme heat in July and August killed most of what I had planted in the first spring even lavender which I had thought was an easy plant to establish in Mediterranean conditions . The problem is with the way the modern garden centres turn out plants where everything is cossetted with the result that the plant has built up no reserves and when exposed to extreme temperatures in the soil the root systems have no reserves and shrivel up … learning from this I now only plant in the Autumn months where the plants have at least nine months growth in the ground before exposed to the searing heat of July and August .

I have also had a crash course in the Mediterranean weeds where I have learnt which weed has deep roots and becomes a menace if left unchecked for a season … the old saying that a weed is just a plant in the wrong place is of course true and some of the Croatian so called weeds are fabulous looking plants to my eyes but local friends visiting the garden were horrified and I quickly began to learn the difference between a nice plant and what would turn out to be a noxious weed !

While in Croatia earlier in the month I visited  two of my favourite places in nearby Bosnia …  first to Mostar with it’s famous Stari Most , I should say world famous , a 16th century Ottoman bridge that I first saw in April 1996 when it lay destroyed at the bottom of the Neretva river destroyed by shelling from the Croat forces surrounding the West side of the city during the vicious civil war a year earlier between the Muslims and Croats . At that time we used to cross the river on a wooden footbridge erected for temporary use by IFOR , the intervention force set up by the EU and the US to police the fragile peace in Bosnia . Back then I was in Mostar as part of EU CAFAO Mission assisting with the creation of a united customs service in the city as both sides were operating separate customs services , no easy task and not safe either as in those days a Croat customs officer caught on the west side of the river could be shot likewise for a Muslim officer brave enough to cross to the east side and I well remember escorting in my car the Muslim Director of Customs across to meet his Croat Director counterpoint for the first time and when walking into the offices for the meeting the Muslim officer told me he was last there a year previously as a prisoner of war . 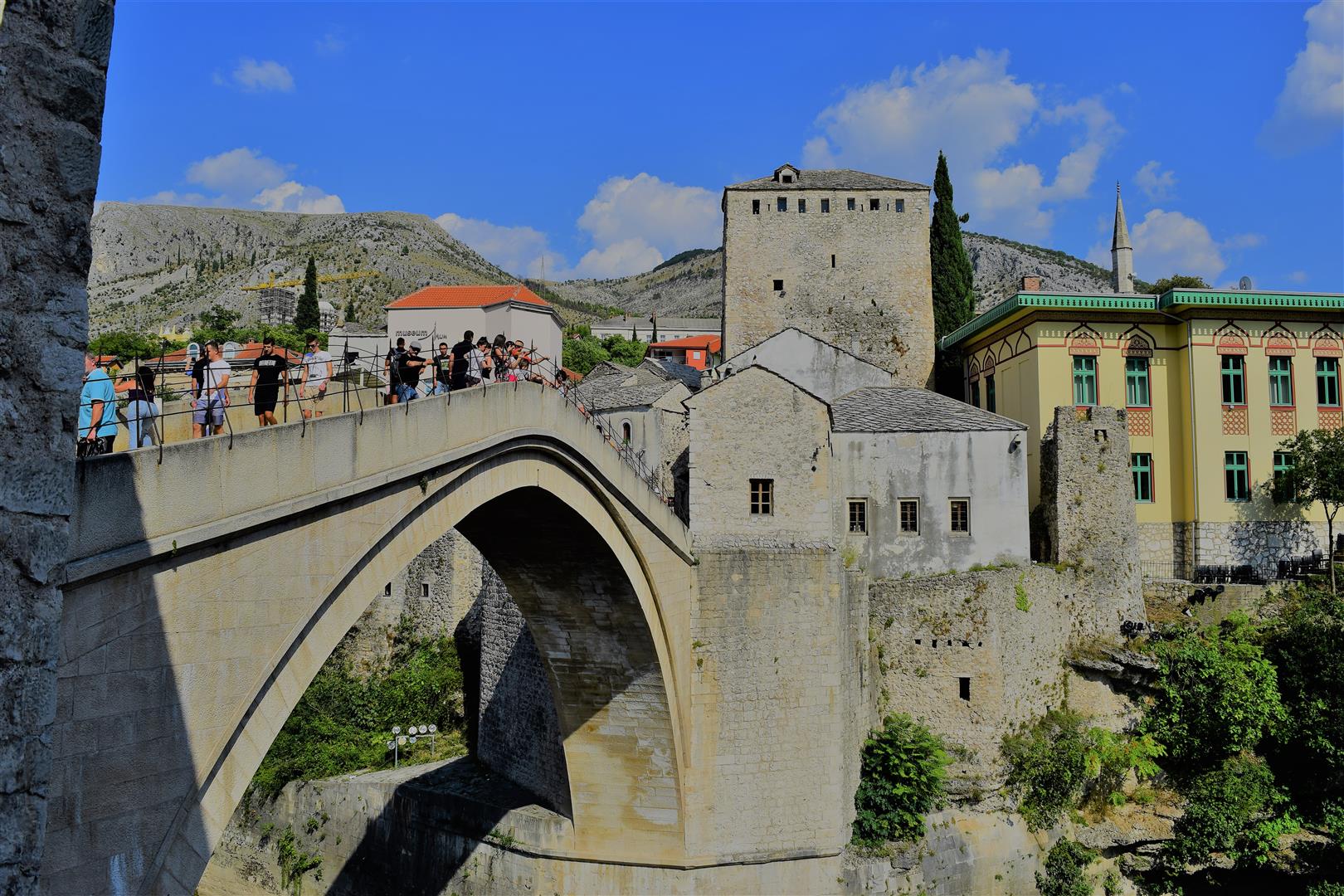 Happily things have improved in Mostar since 1996 , the bridge was rebuilt in 2004 and tourists are flocking in by the millions each year but political tension remain high with a general election coming up in October and both Muslim and Croats keep to their own side of the river and don’t mix at all and compete with religion now the weapons of choice and while the minarets blast out the call to prayer the catholics respond by erecting 33 metre high crosses on hills on their own side looking across and down on the other side .

For all it’s tension I love Mostar and if on holidays in Dubrovnik or Split it is only a two hour drive away and not to be missed .

If Mostar remains a symbol of religious intolerance then an hours drive away the Bogomil graveyard in Stolac and the Bogomil followers , an offshoot of christianity , practised and preached love and acceptance of all religions from the 10th to the fifteenth century in Bosnia and it is a place I have always been fascinated with since my first visit in 1996 . The Bogomils remain to this day an enigma , these huge solid stone sarcophagi called stecak are solid and don’t mark a grave and historians still have not desciphered their latin like writing or have a clue as to what the spacemen like carvings on the stones represent .  Bosnia is a country divided by religion , catholic, orthodox , muslim and there is little love or tolerance between any of them . 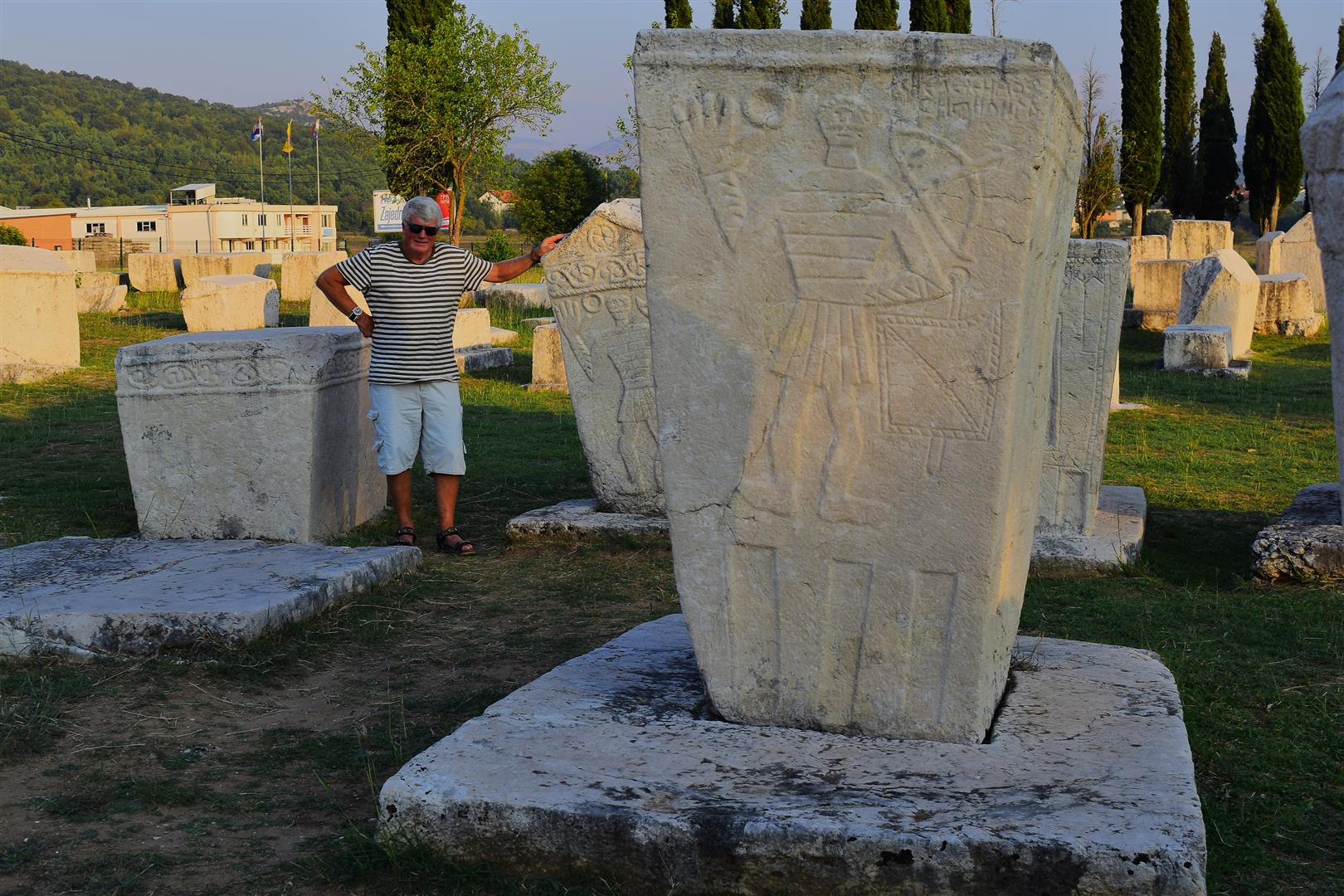 Late September in the garden is a good time to start dividing perrenials , especially those plants that look pretty used up at this stage and hostas are a prime example as they are looking tattered just now and having some leaves on a plant helps with their division which couldn’t be easier with hostas , just dig the whole plant up and then drive a sharp spade through it , in half generally but an older large plant can give four divisions and I plant all divisions in separate pots filled with a good potting compost like  John Innes , leave them overwinter in the pots and plant into their final positions early next March or late February giving each pot a spoonful of osmacote , a slow release fertiliser that will feed the new plant over the next six months . Hostas look pretty ragged when dying back but one hosta retains it’s shape until mid November , the grey small leafed Halcyon is still looking good in pots here . 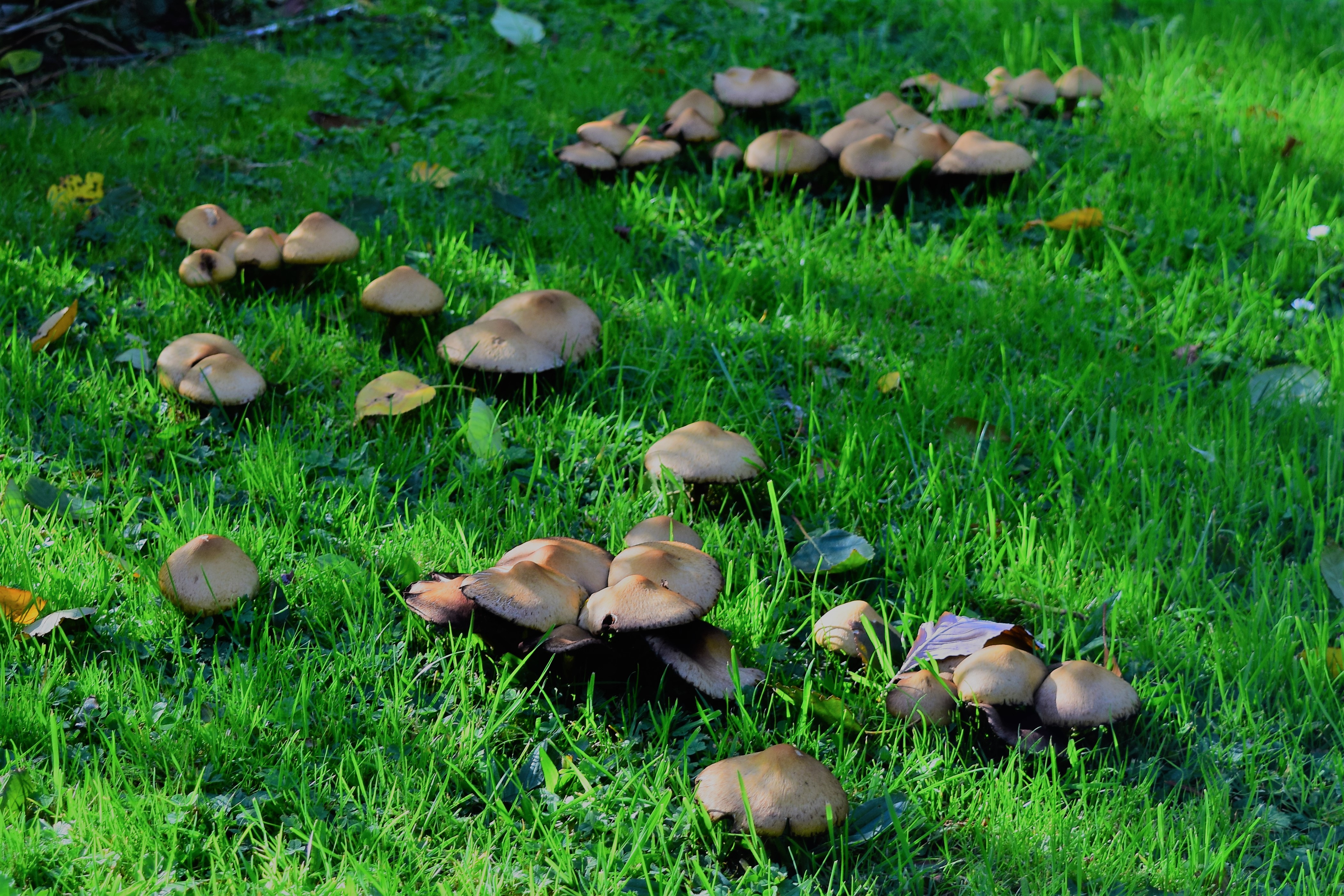 I buy my mushrooms from the supermarket , the non organic type as how can you improve on mushrooms grown in compost … but would never never pick or eat wild mushrooms unless accompanied by an expert in fungi as they can be poisonous and lead to liver failure … but they look great nevertheless in the garden ! 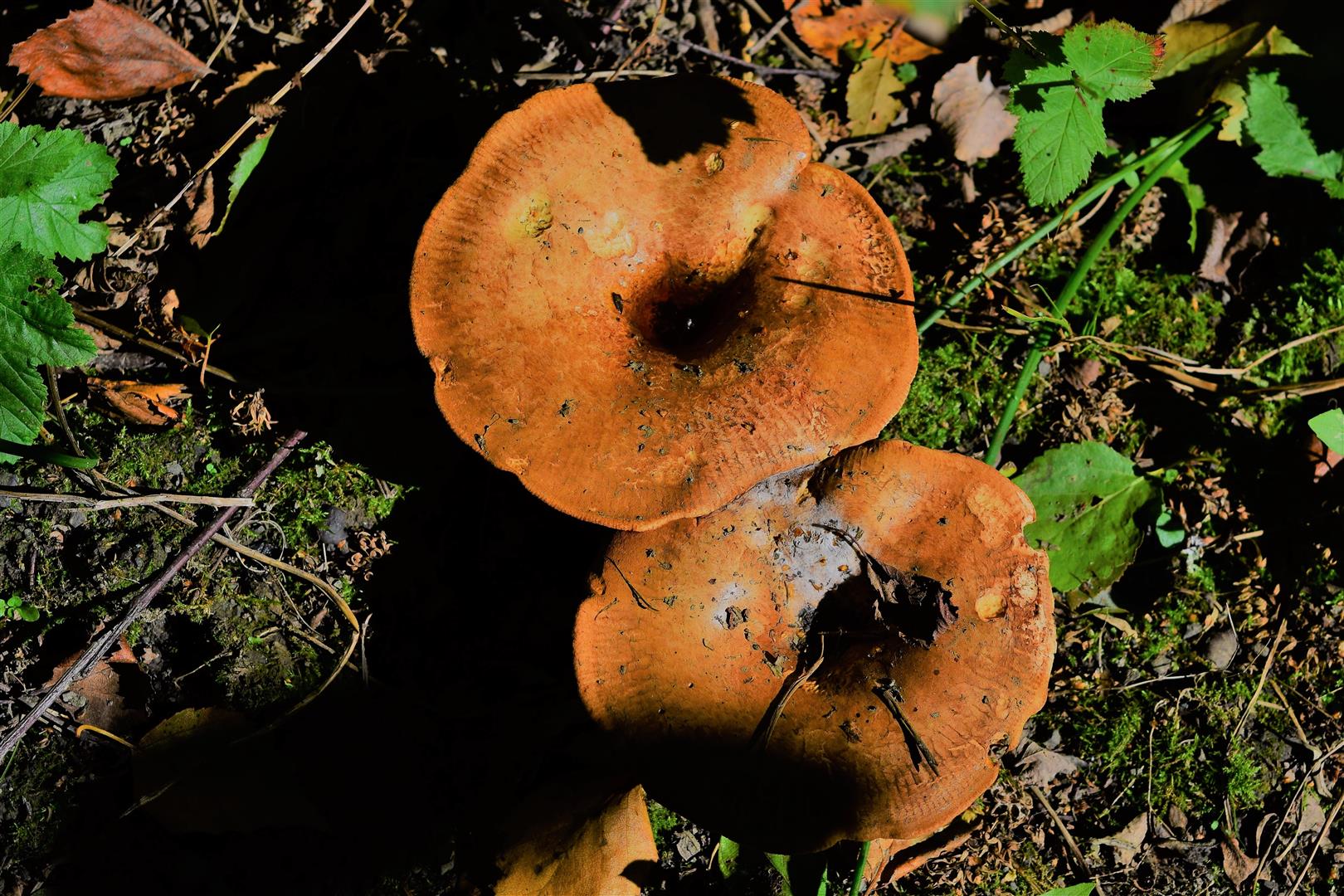 The Garden in late September 2018 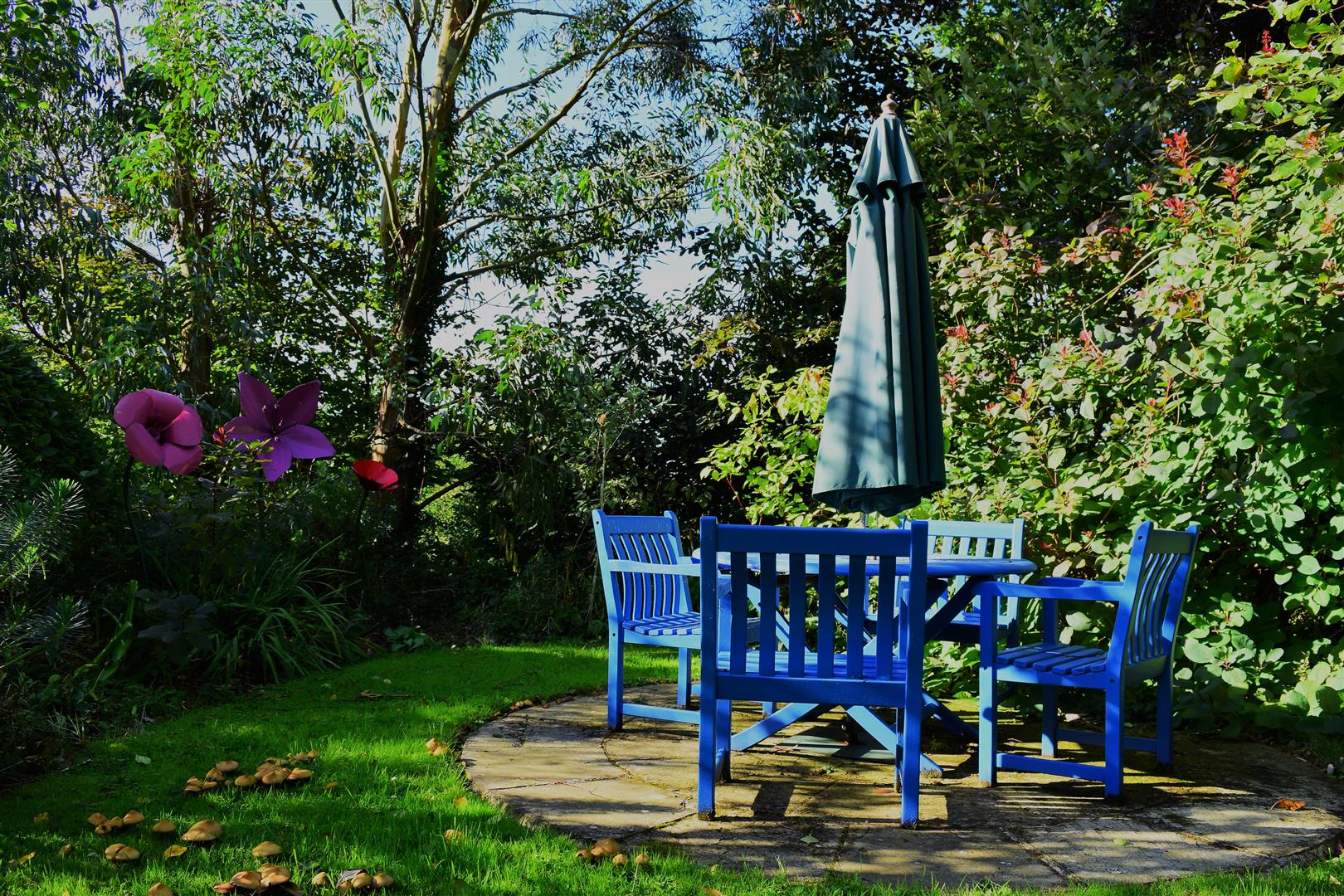 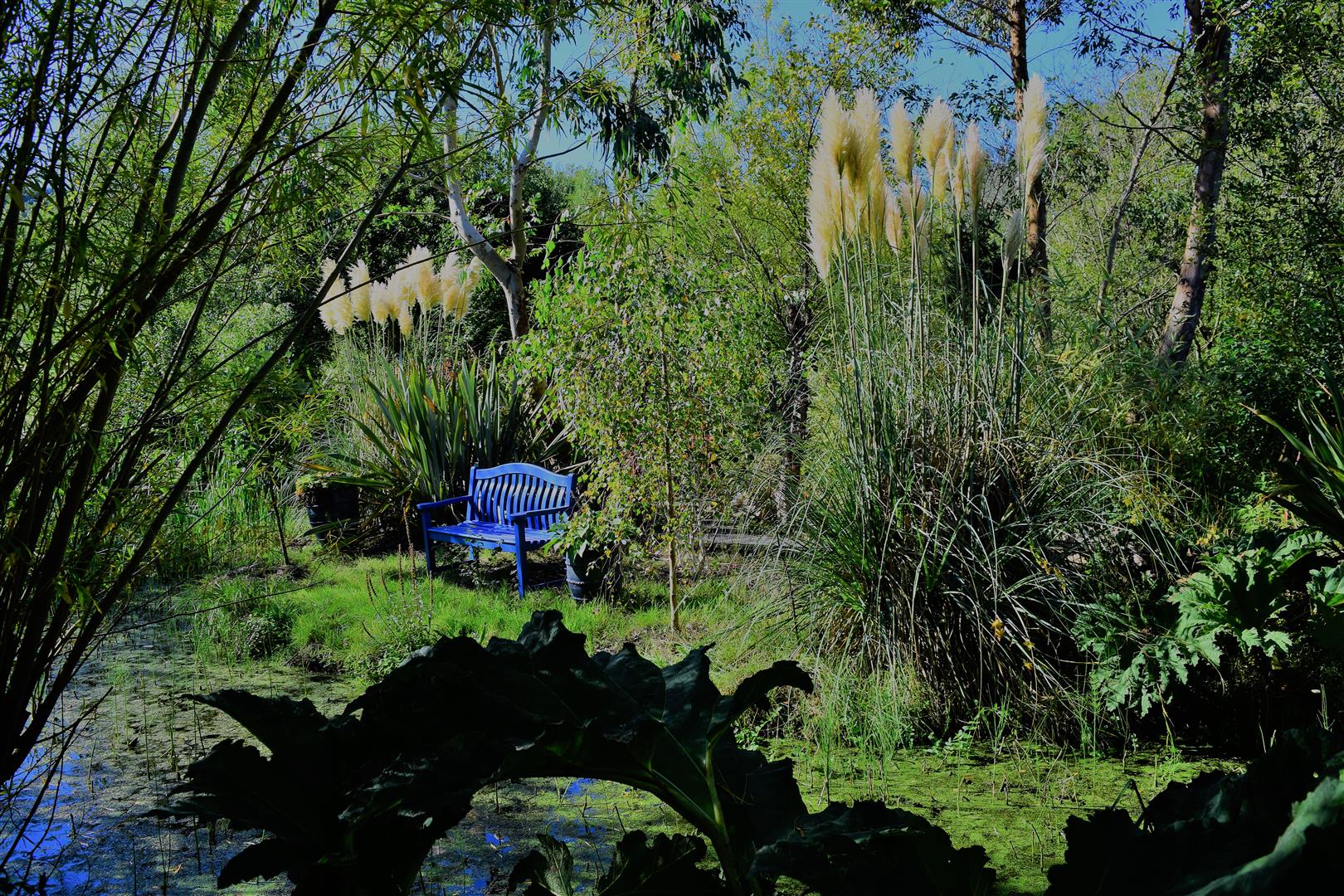 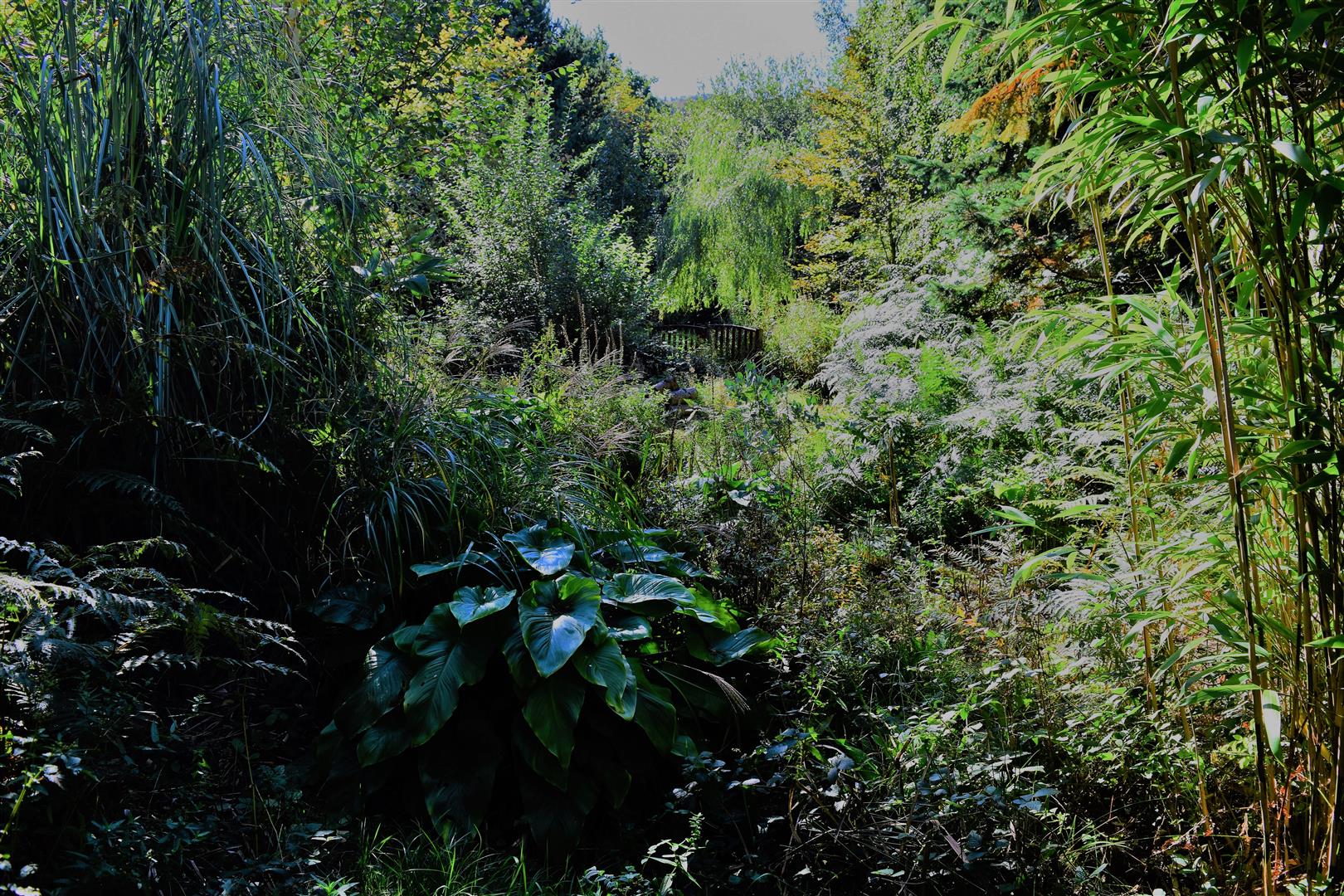 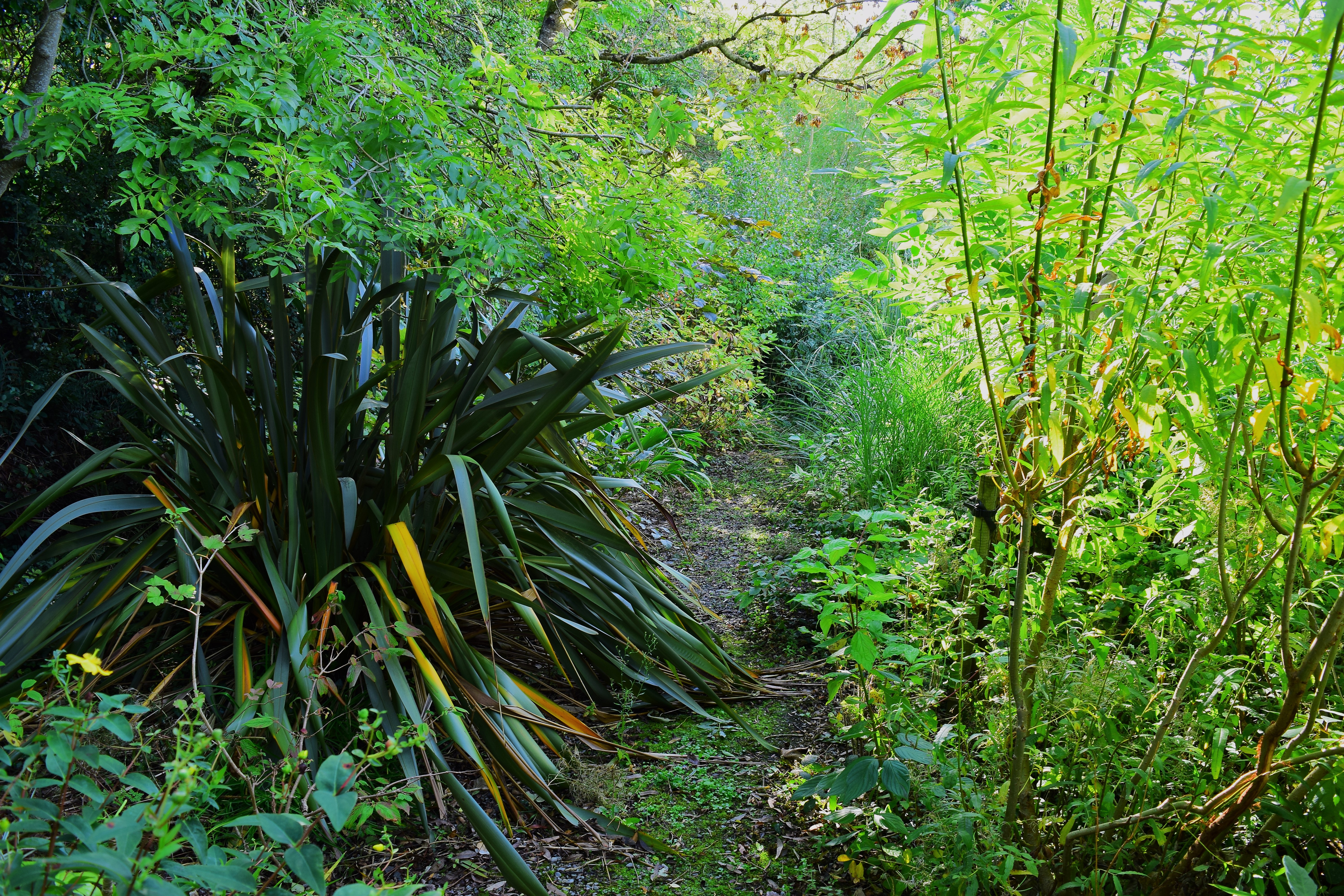 “Eighteen years ago we bought our house at Old Spa Road here in Clonmel and this came with seven acres of wetland , land that was so bad that it was really a collection of water logged rushy fields that didn’t hold out any hope of ever being a garden and in fact it was known locally for generations of kids as THE SWAMP.

Against all the odds  there is a garden there now and even some apple trees but no exceptional plants or exotic trees as the ground would not suit them but there is a wildness and a character and we believe we have tapped into the spirit of the land  and walking through what we have created we feel in tune with this spirit and  always come back from a walk down the garden feeling at peace and comfortable within ourselves .

This is airy fairy new age stuff that I never expected to hear myself speaking about what is essentially  an inanimate and artificial thing , as gardens normally are , where plants and shrubs are grown shaped primped and pruned into rigid lines but we didn’t make this patch of land conform to any plan and went with the flow and where we found reasonable soil we planted , where we came to water we couldn’t drain we bridged it with wooden walkways , the land told us what to do and we followed that advice to end up with what is now a garden open to the public and which has been featured in several books and magazines and visited regularly by garden societies as far apart as Westport , Cork , Kilkenny , Waterford , Wexford and many from Dublin including the Royal Horticultural Society of Ireland .

With hindsight and as they say “ if I knew then what I know now “ there is no way we would have attempted what proved to be a massive project to reclaim almost eight acres of swamp from the wilderness  and most people would have shouted RUN !!  It was madness but looking back now eighteen years later it was worth it and in retirement it gave both of us a second career .

That naievity on both our parts also helped mask the enormity of the task in that there never was an overall plan just a series of projects tackling various areas with one leading incrementally to the next so we never woke up in the morning thinking there was a mountain out there to be climbed …rather every few months there was another exciting project beckoning to get started on .

From the first excavation by the digger in those early days we thought it was lovely when in fact looking back now at photos of the mud , the water,  it looked like the trenches in the First World War and was positively awful and visitors must have been looking at our enthusiasm and wondering when the men in white coats would be arriving to take us away !!

How the garden got it’s name

Snezana and I could never agree on a name for the garden over the years  as it took shape  . At various times I suggested  Willow Farm ..Olive Farm … Oakwood House … all equally pretentious …  she never suggested a name of her own just kept vetoing my suggestions so we decided not to have a name . However I was contacted by Gerry Daly’s gardening website who asked to list the garden in their guide . Filling out the details online I entered the names of the owners as Michael O’Riordan and Snezana Petrovska – O’Riordan which is her Yugoslav family name but left the garden name section blank  and heard no more until back comes the listing as .. you’ve guessed it .. Petrovska Garden !

I could have edited the entry but decided that the computer knew something I didn’t  know and had to acknowledge that she always tolerated listening to me prattling on about gardening all these years , japonica this japonica that without complaint …. so Petrovska Garden it is !

Sometimes though when on my own in the quietest part of the lower wood I have been known to sob quietly …. like Marlon Brando in On the Waterfront … I coudda been a contender … it shoudda been  me !! ”