You might wonder what garden flowers can possibly have to do with wars but take the British wearing of the red poppy to remember their war dead from WW 1 or the War of the Roses in England in the 15th century where the House of York wore a white rose and the House of Lancaster a red rose or in Ireland where we remember our Republican dead of 1916 with the Easter Lily .

“They shall not grow old as we that are left grow old ,

age shall not weary them nor the years condemn .

At the going down of the sun  and in the morning we will remember them .”

Here in Ireland  the wearing of the poppy has always been a contentious thing particularly in the Republic even though over 210,000 Irish soldiers served in the British Army during the Great War but when they came home  from 1919 onwards Irish public opinion had changed with the brutal putting down of the 1916 Easter Rising and the British Army summary execution of the leaders  that followed , so their serving as British soldiers was almost a dirty word never to be mentioned or commemorated although in recent years especially this year for the 100th  anniversary attitudes have changed and their participation , suffering and loss of life is being proudly acknowledged … it took almost a hundred years mind you but better late than never . 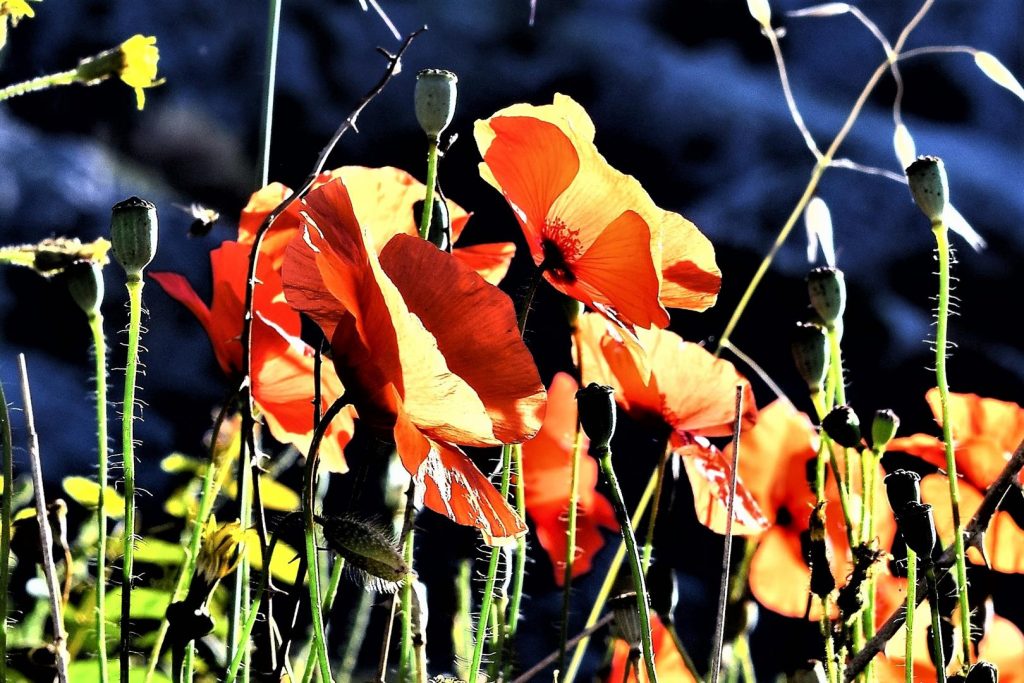 My Father’s side of the family all believed in the British Empire in the early 1900’s before the Great War and my Grandfather was a British Army captain who fought and was wounded at the Somme while my Father and Mother’s side of the family were all Irish Republican and me … well I was not political at all and loved British history  BUT I do not wear the poppy , never have nor have I worn the Easter Lily either . Not because of any anti war sentiment but the Lily in my opinion has been taken over by extreme republicanism which I do not support and the poppy because I do not believe that the dead of WW 1 are my dead and while I accept that wearing a poppy can now be seen as remembrance of all the dead in the Great War I still am my Father’s son and cannot bring myself to wear the poppy and while I know I should be more accepting that’s the way it is , a step too far for me .

A beautiful giant iron sculpture of a typical WW 1 ” Tommy ” soldier was on temporary display  in St. Stephen’s Green , Dublin during November to commemorate the fallen , brilliantly conceived and fashioned from bits of metal collected on the former battle fields in Flanders … sad to report that on it’s last day it was vandalised with red paint , a shameful act . 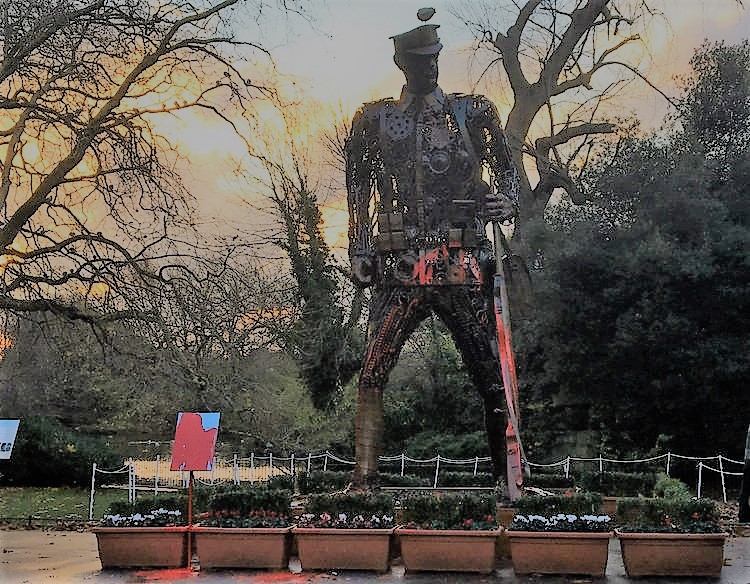 November is officially winter in the garden and I use this month always to kick off in earnest getting the garden in shape for next year , planting all outstanding bulbs and even though I delay cutting back hard the dog woods and golden willows until late January / early February to take advantage of their great winter bark , I take down all the common willows … I also leave the grasses , miscanthus varieties and such until February as they maintain a nice winter structure and it is now a chance to spray around the trees and shrubs with a systemic weedkiller  when there are no leaves and a good cleaning now will keep them clean for most of next year . 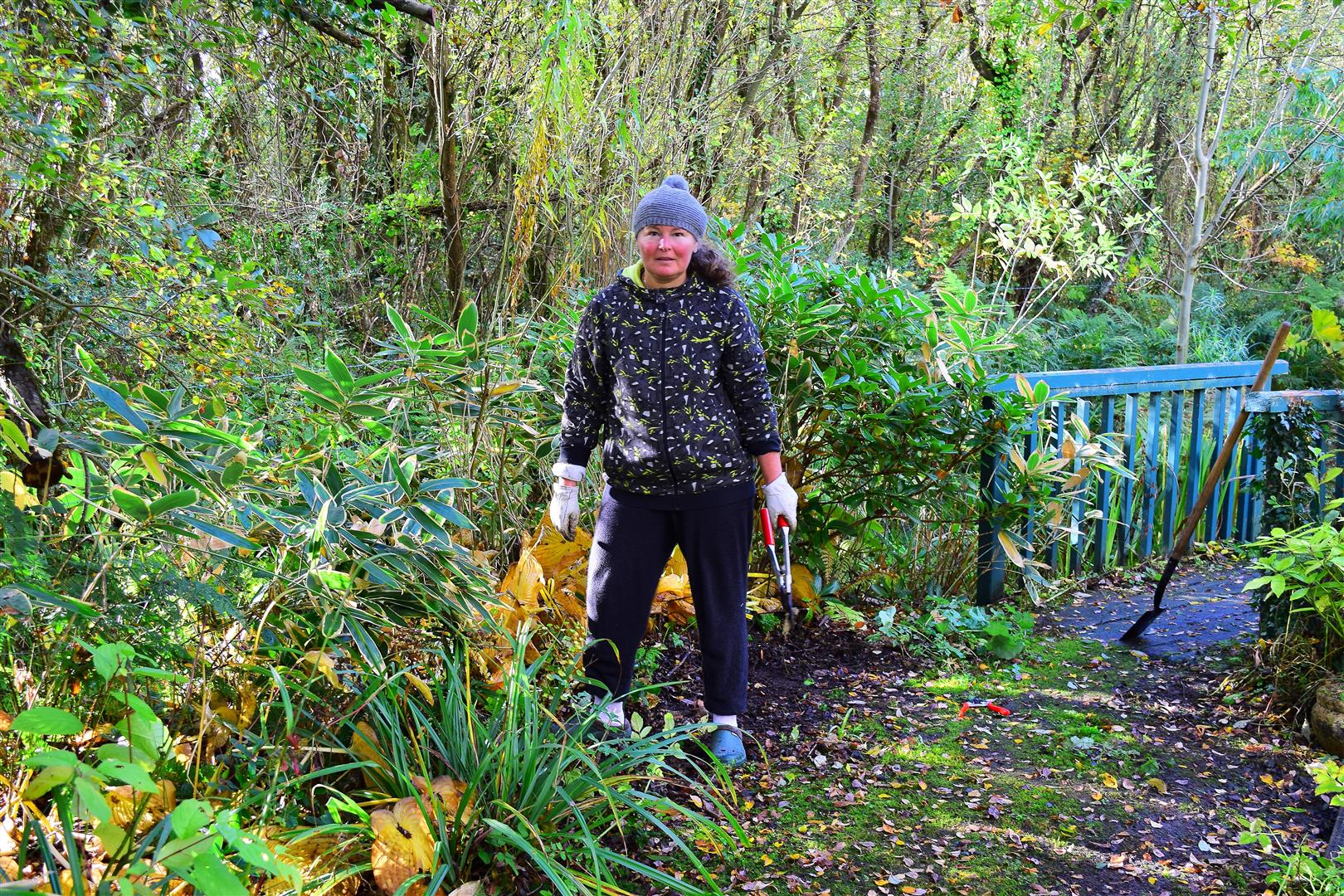 Cleaning up for the new season , Snezana in the Lower Garden , 8th November 2018

Still good Autumn leave colour around and the silver birch are having a spectacular  show . 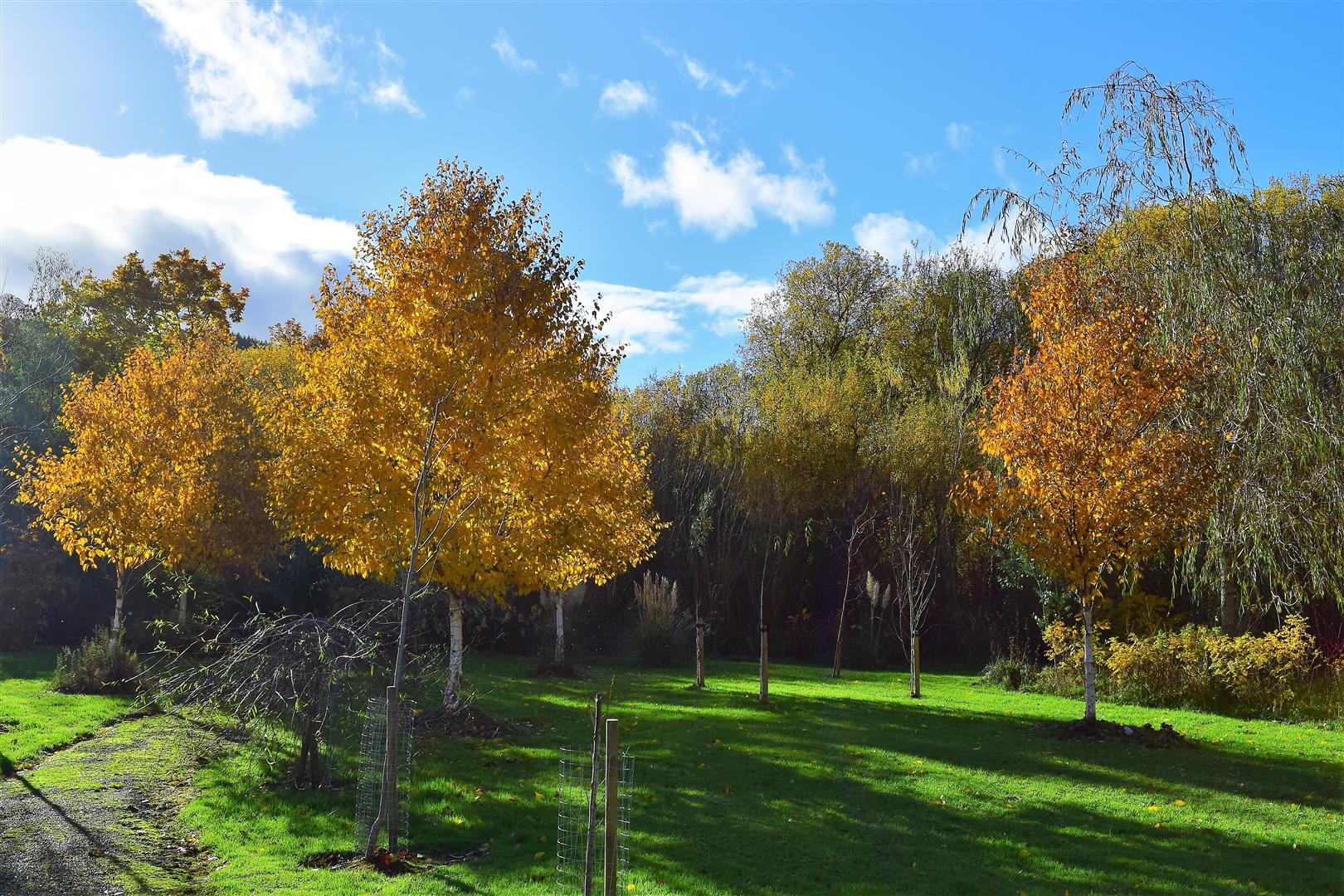 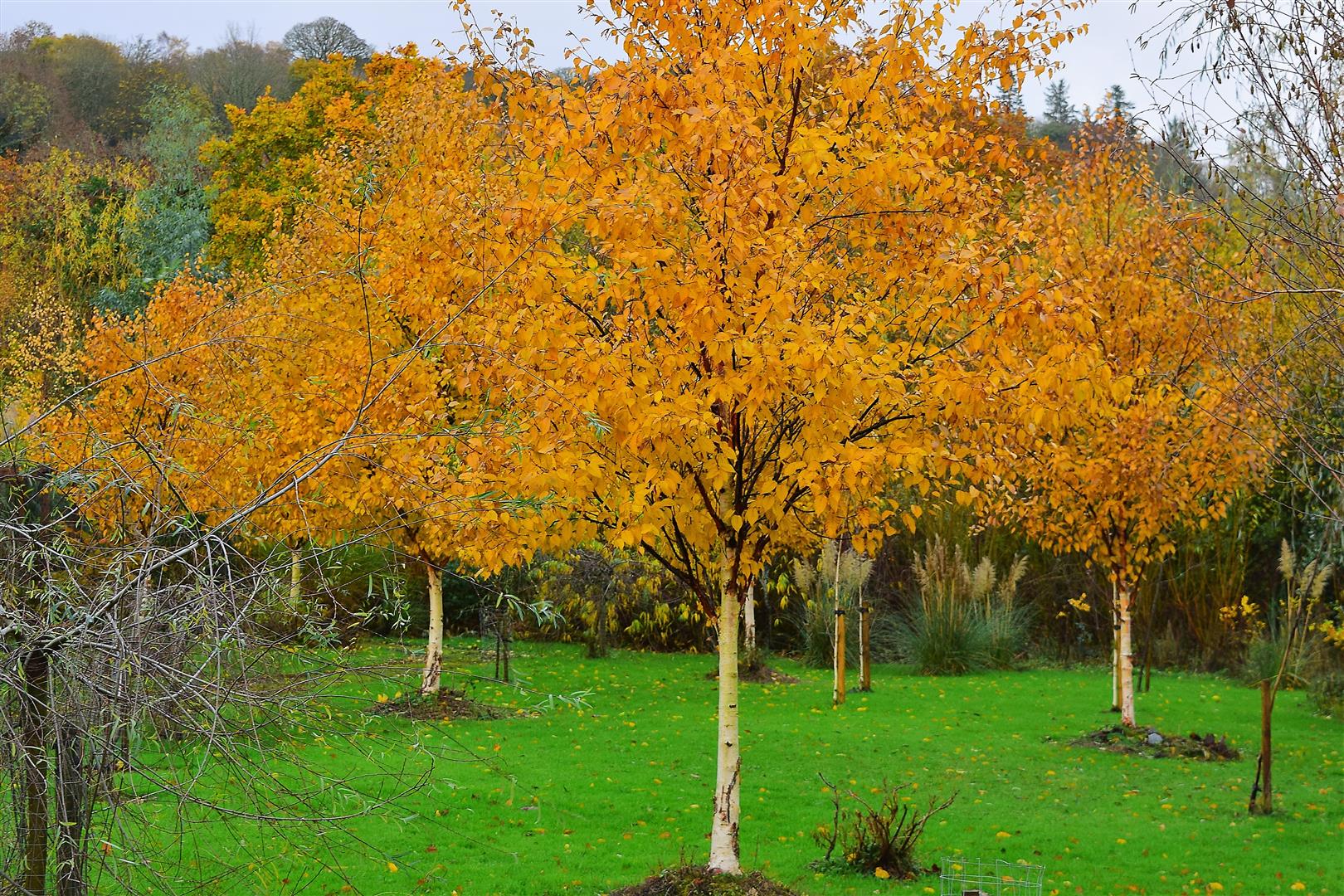 I have always overlooked the silver birch for autumn colour as it has such terrific other qualities throughout the year , my absolute favourite tree for any garden with it’s white bark in the winter and it’s soft downy leaves in summer it is a real show stopper and I grow it throughout the garden and we are lucky enough to have the native silver birch self seeding all over the woodland where we leave it to grow away unchecked as in my view you can never have enough silver birch .

The expensive jacquemontii variety of course never self seeds and is only available  commercially and while it will grow better in dampish soil it doesen’t like excessive wet so here we plant it up on mounded earth out of the ground . The multi stemmed variety of jacquemontii are spectacular but very expensive costing up to three times the price of a single specimen and this is because it is expensive for the growers to produce and while occasionally a silver birch will branch out naturally from the bottom of the tree normally a multi stemmed is produced by either cutting down to the base of a mature seven or eight year old tree or more usually starting with three single specimens growing on in a large container . 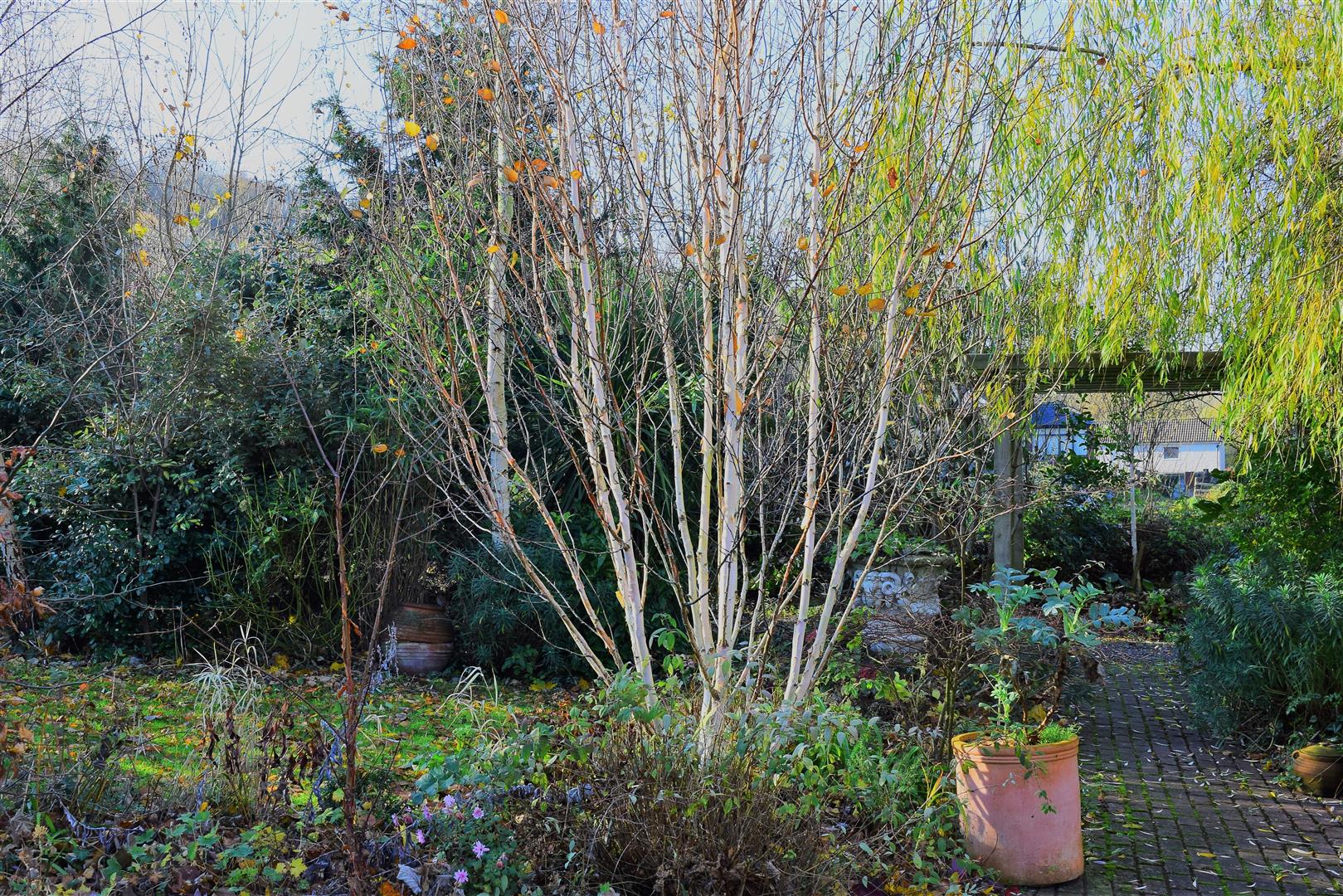 The native silver birch can also be bought in garden centres as whips which are about a metre and a half high and while thin will grow into a lovely tree in about five years and as they cost no more than a few euros each this is a great way to stock your garden . The native tree is not as white or as spectacular as the expensive jaquemontii variety but to my mind is actually a nicer tree in a wild setting as it is a true woodlander and  looks much more natural in a wild garden and to be honest over the past few years I have grown to prefer it to it’s more showy relative which although stunning always looks a little out of place or perhaps I should say the jacquemontii demands to be looked at , the Christiano Ronaldo of the tree world !! 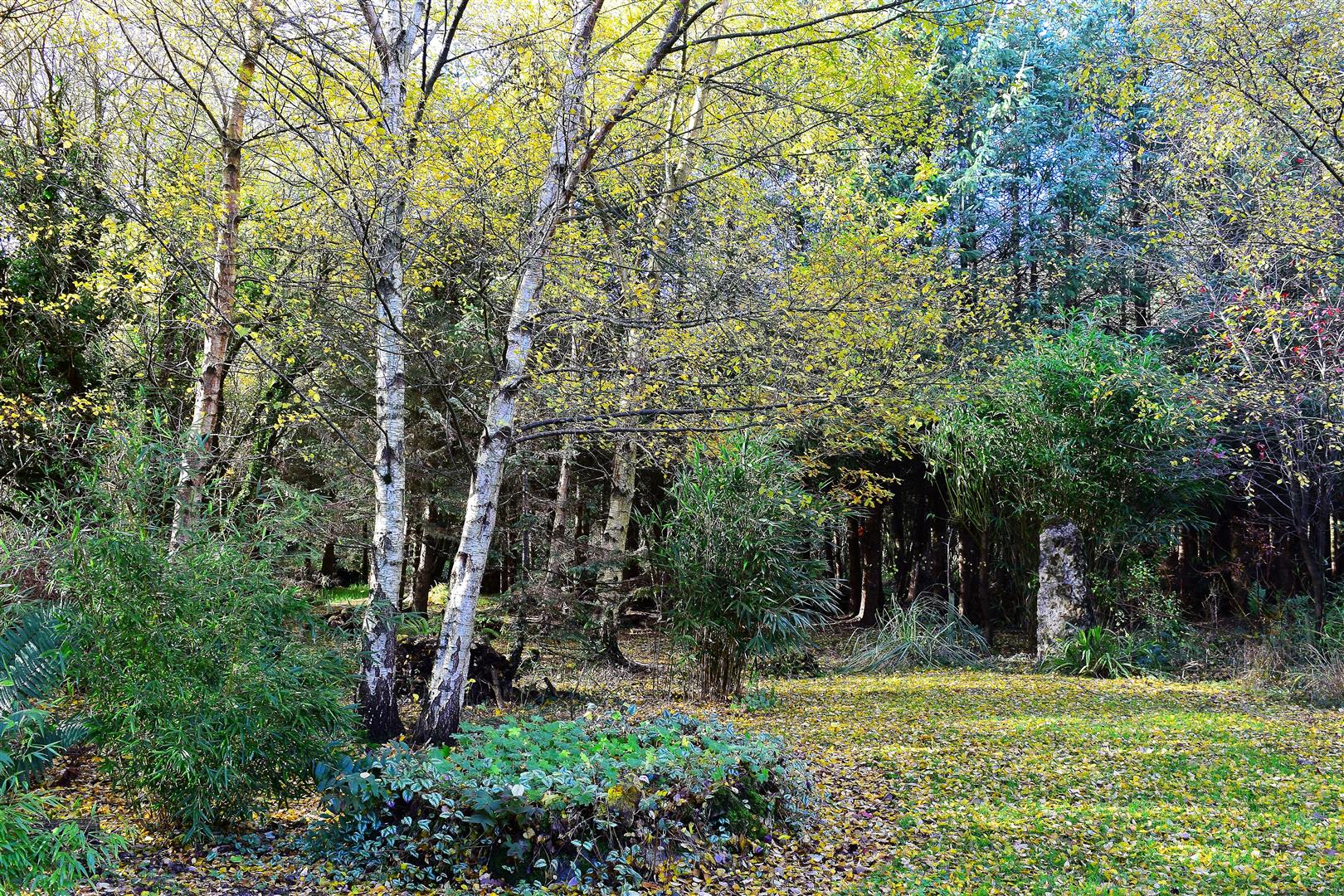 From now to end of March the silver birch is the mainstay of the winter garden and it lights up whatever area it is in and as I say my favourite tree !

Copper beech is also having a great autumn flourish and this photo is from Adare Manor in Co. Limerick a few weeks ago . 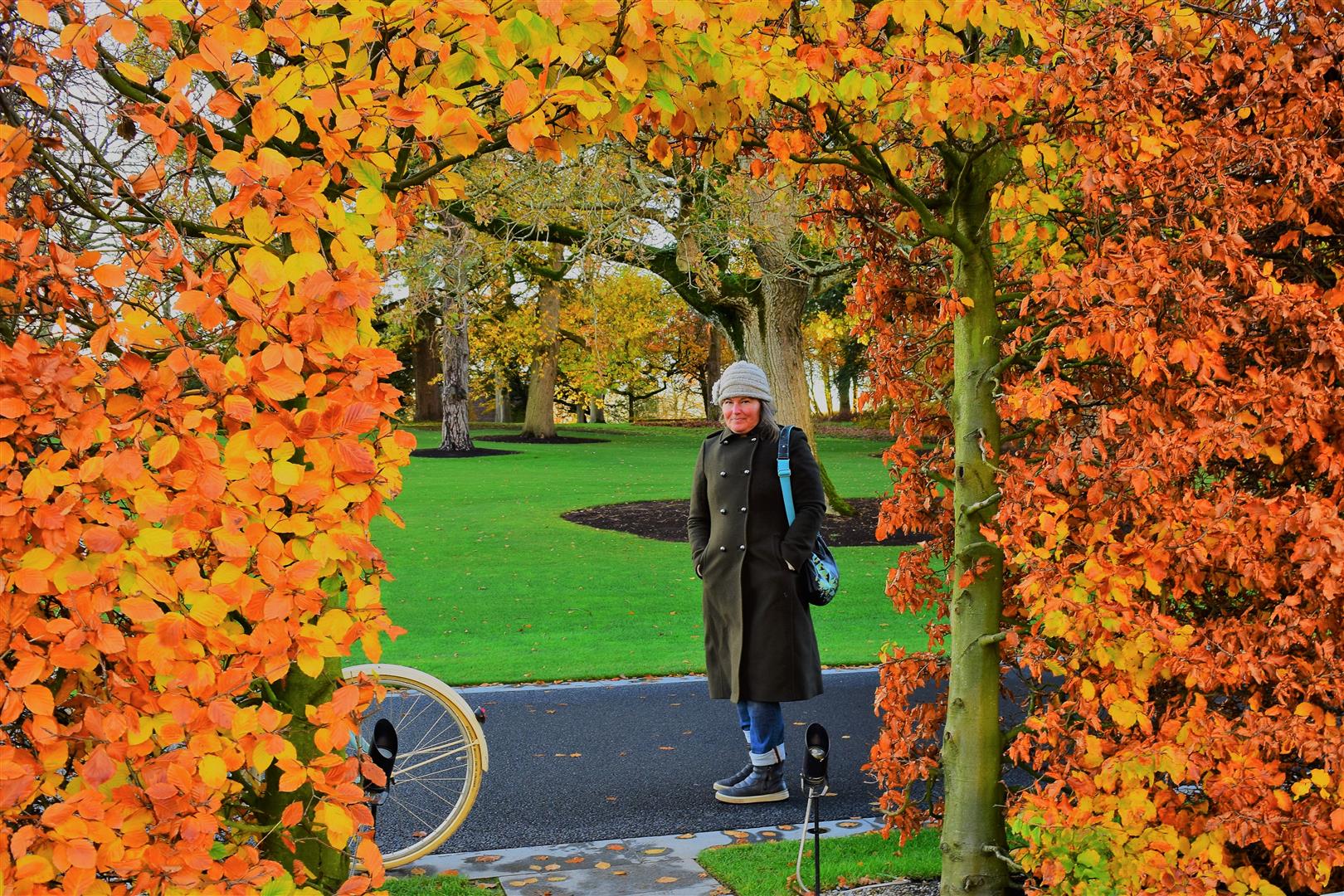 Copper beech hedging used around a gate in the grounds of Adare Manor, November 6th 2918

There are of course what I would call 1st Division plants of which the silver birch is definitely one but then there are the 2nd Division specimens , those back or middle of border shrubs that are also necessary and of these the spirea family are excellent but they need good ground no excessive wet and you can hack them back at any time of the year  , I prune mine in autumn although the books say May just after flowering is best but then I am of the prune whenever you have a secateurs in your hand and in the mood gardener !

Spirea arguta which is also known as the wedding garland is the one I use here , magnificent arching flowering branches in April and May , a real stunner and in that period one of the best shrubs in the garden but then nothing for the next six months , a real dowdy shrub . but in November you get a magnificent dying leaf colour and you almost forgive the plant being 2nd Division ! 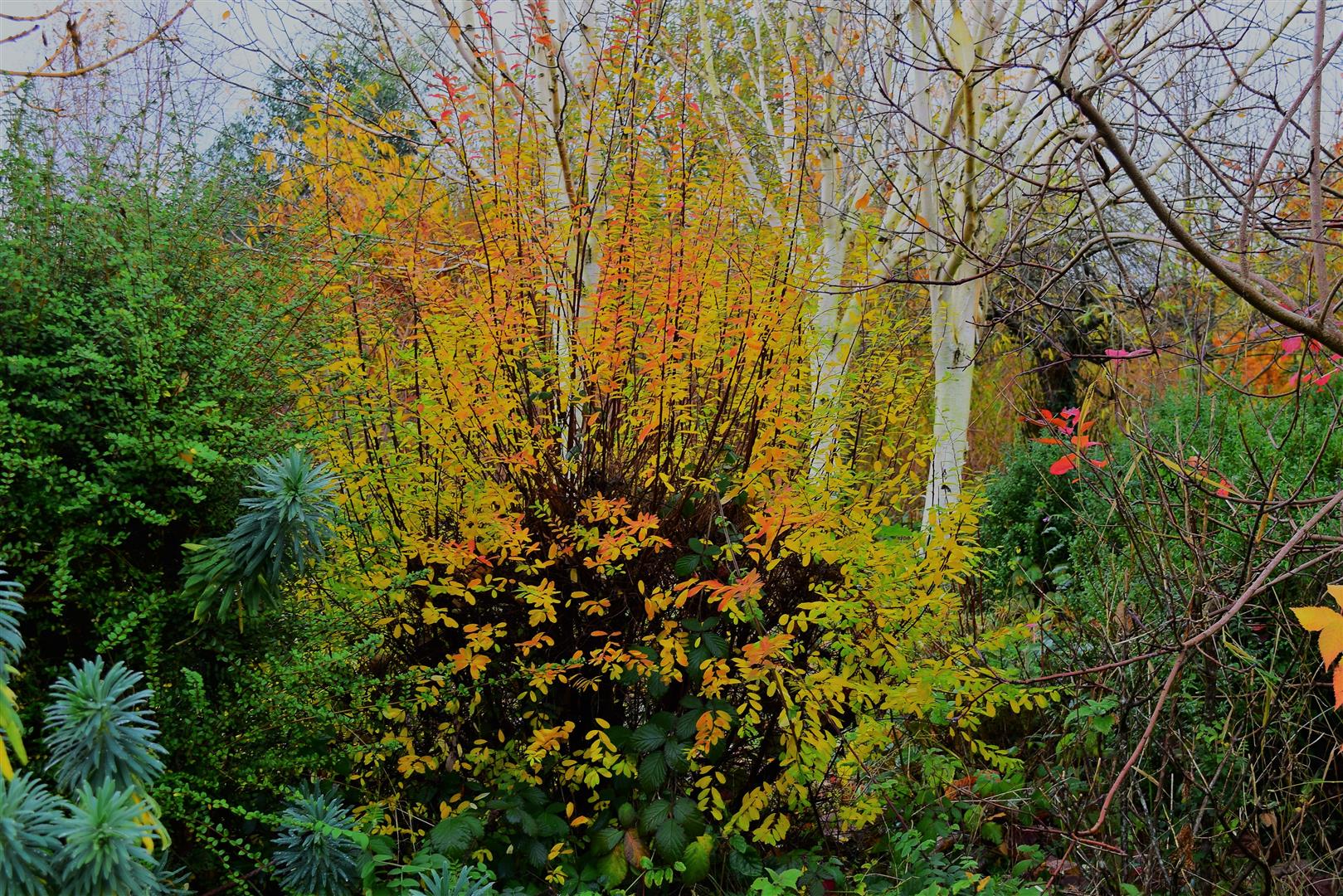 Every month there is a huge debate in our house , many huge debates truth be told but this is the one I can share here (!) , the use of weed killer which I insist on and while of course in a perfect world it is not desirable to use a glyphosate weed killer such as round up at all but I maintain that it is impossible to maintain a garden of eight acres and keep shrubberies and paths reasonable free of couch grass and the dreaded buttercup , the ranuculus family , which if left unchecked  will romp away and insert itself into every area . Snezana of course want’s a totally eco garden where no weed killer is ever used but she has no idea as do any of the other tree huggers in the genteel gardening world as to the tsunami of weeds that will hit the garden … any professional gardener will admit to the regular responsible use of weed killer and in my case I use it every three weeks on the paths from March to November and from November to February when deciduous plants have lost their leaves I use the opportunity to blitz the areas around the base of trees and shrubs .

It is a question a lot of visitors to the garden ask , weed killer or not and of course the second most asked question is how do you control slugs and stop them wolfing down your hosta leaves … both get the honest answer , round up for the weeds and slug pellets for the hostas !

Sculpture in the garden is great in the right place but it is expensive and some of what is on sale in the garden centres is mass produced concretey and very samey i.e. the Roman Goddess Venus , semi naked with an arm draped coyly across her chest and unless you can get an aged specimen at auction which will cost they look very out of place except in Castle or big house gardens .

We only have one piece here , a mother and child which my kids bought in memory of my Mother but usually I use large pots as focal points . Earlier in November we visited Adare Manor in Co. Limerick and saw a beautiful willow sculpture  while at 6000 feet up Mount Nemrut  in Turkey a few years ago we saw the ultimate sculpture , giant stone heads of the Antiochus dynasty dating from the 2nd century BC . 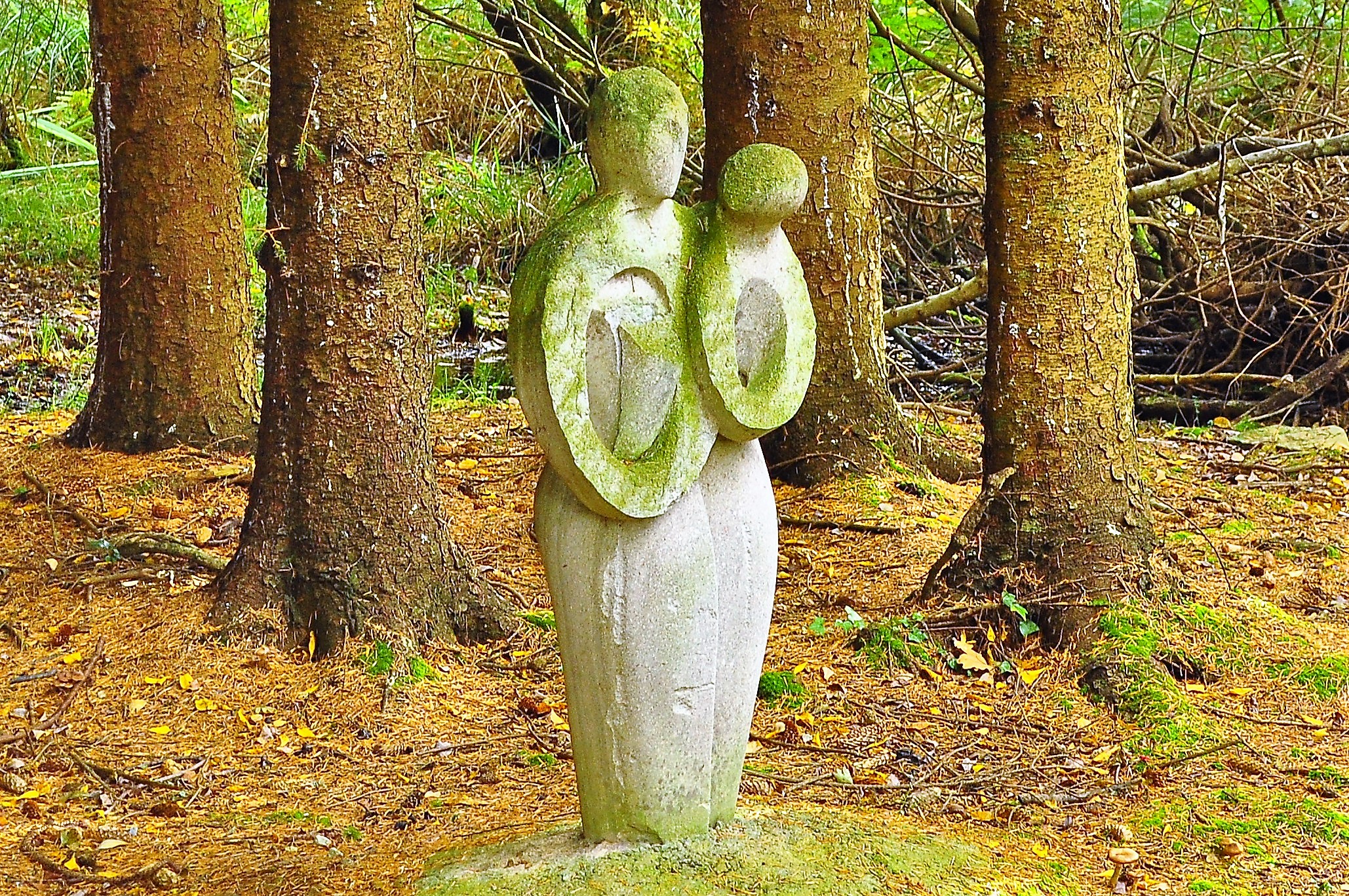 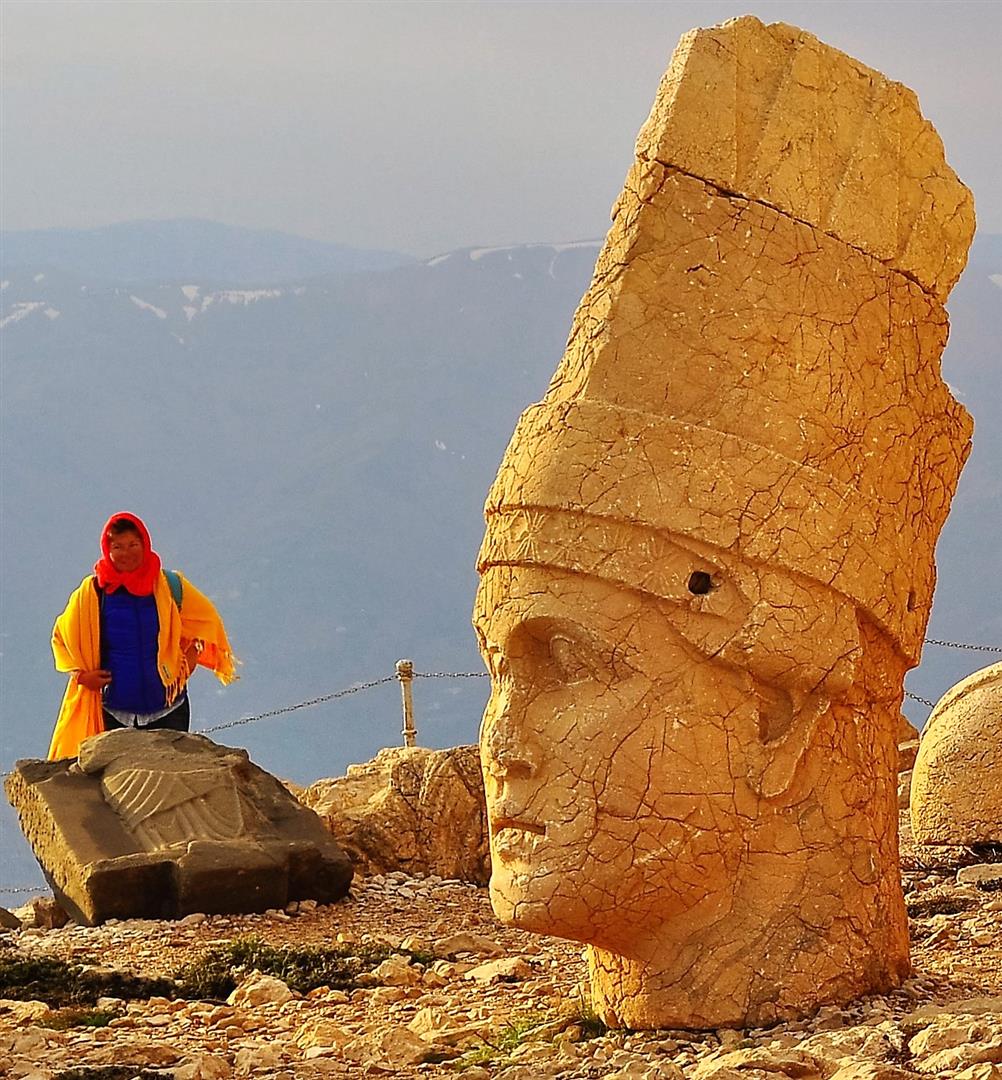 Snezana beside the Head of Antiochus , Nemrut Dag , Turkey , May 2011 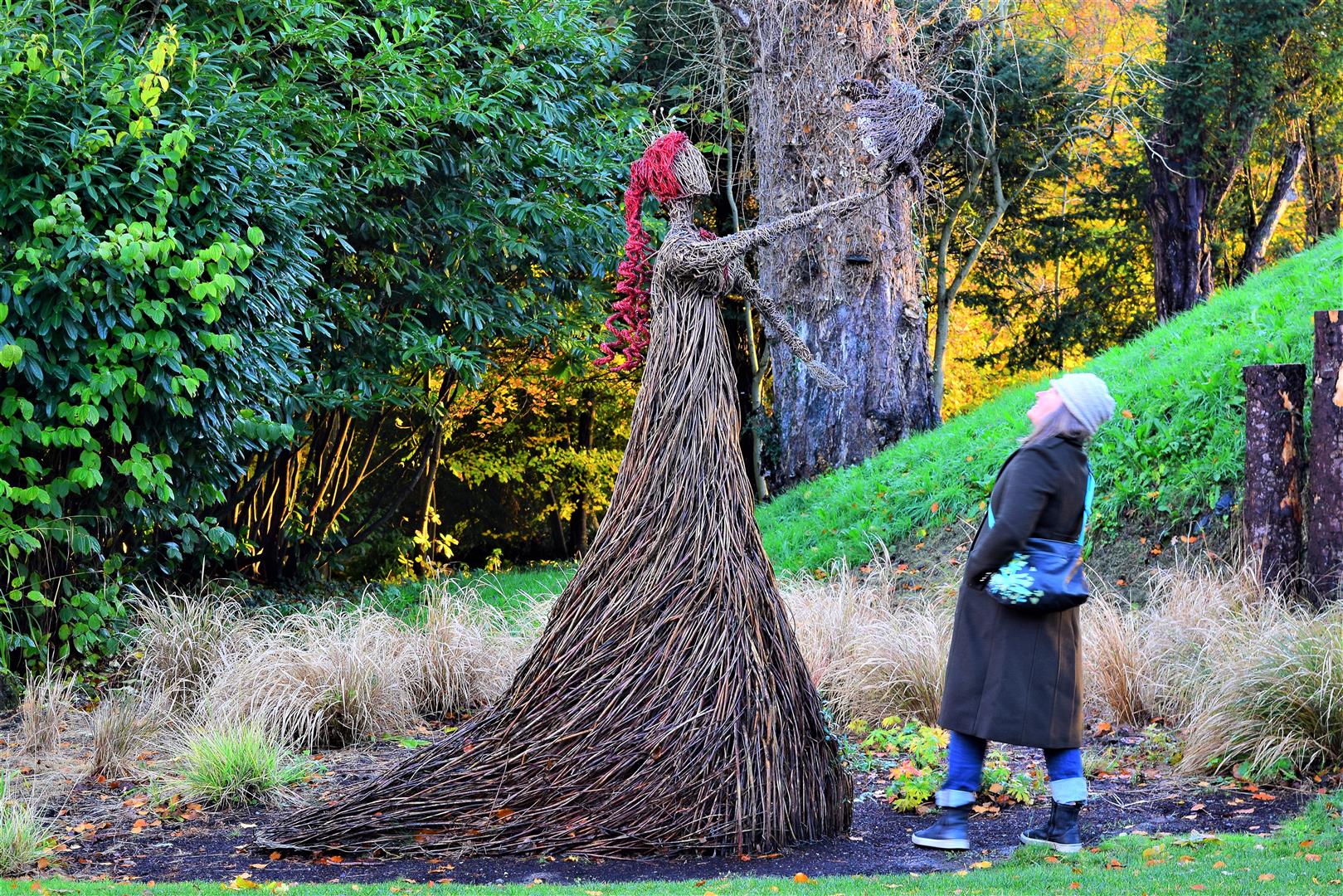 Snezana and I attended a Lion’s Club meeting in November when a cheque from our garden Charity Open Day on August 12th this year was handed over to the Lion’s Club ,  in aid of local Clonmel charities , C- Saw and Friends of Bridgewater House who do amazing work  .

Only sixty days to Spring  but then we will miss the sharp autumn colours ! 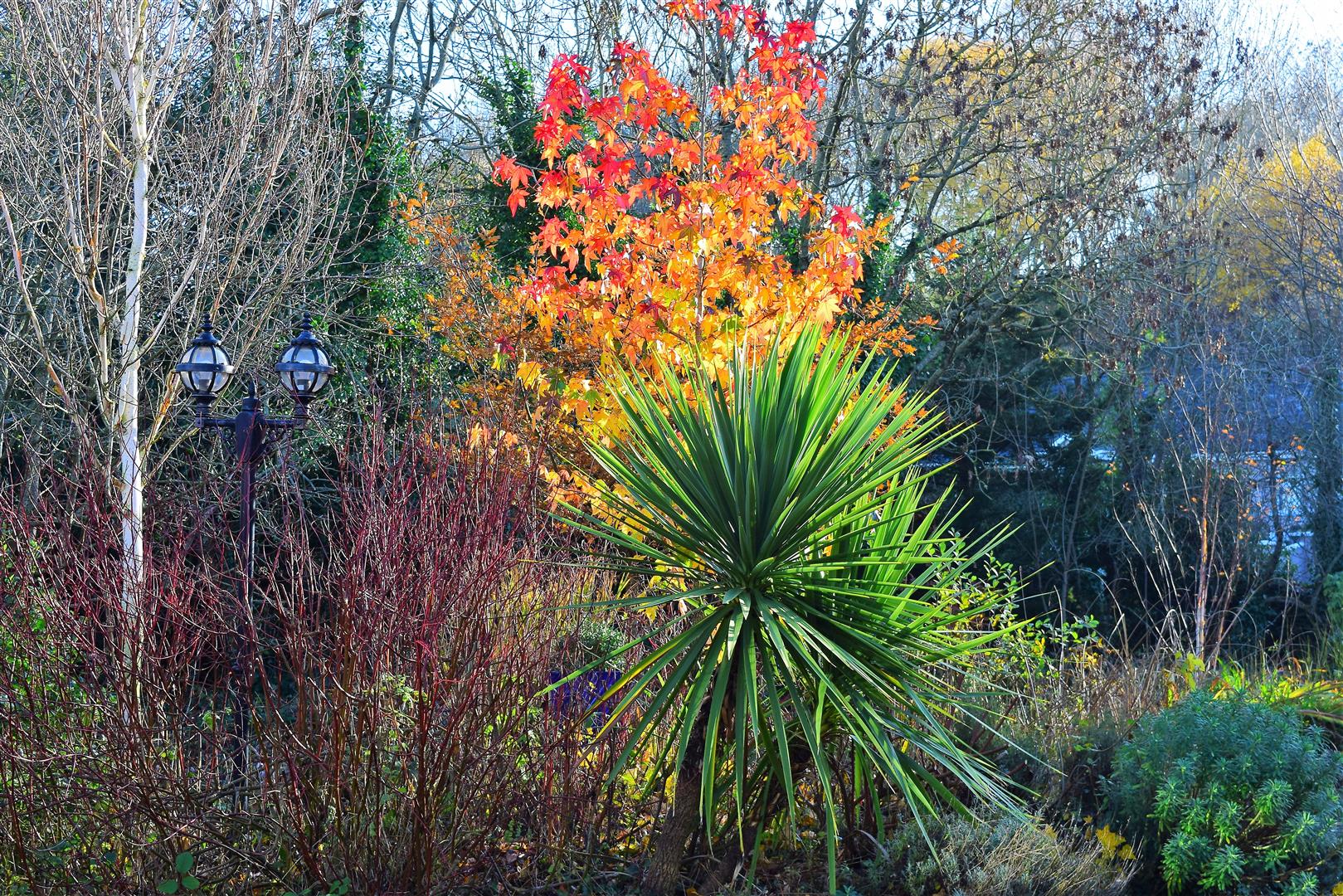