Earlier in November I was able to mark off a bucket list garden that I have wanted to visit all my gardening life , the Alhambra in Granada , the most famous garden in the world which showcases the best of Islamic garden design  especially in it’s use of water . 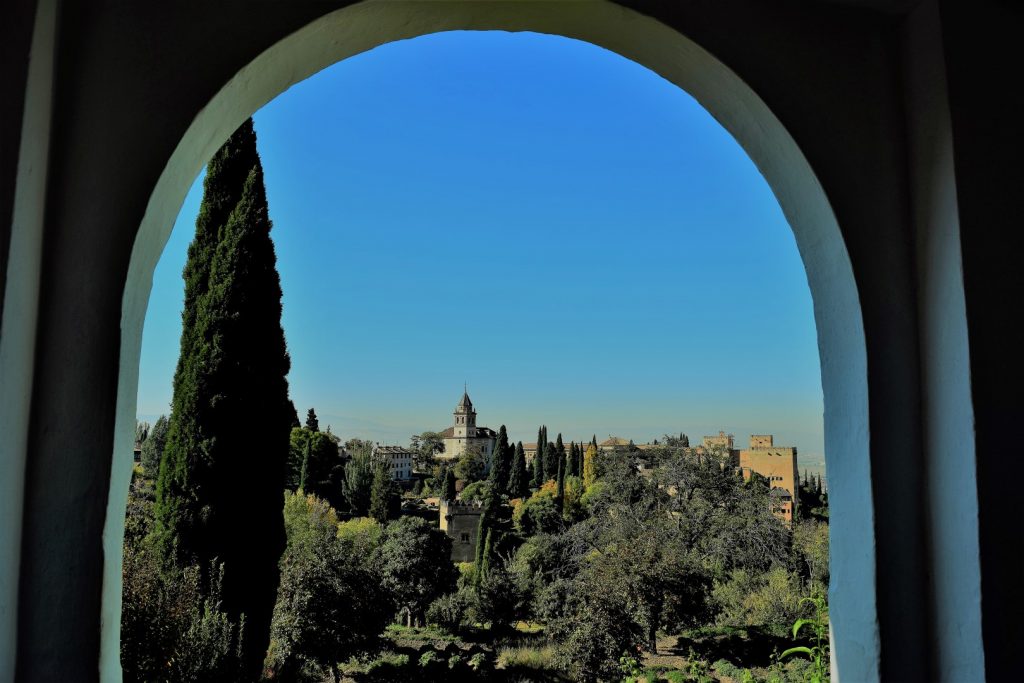 View of the Alhambra , Granada , from the gardens November 14th 2016

A lot of places that you have heard and read about extensively before visiting for the first time can be a bit of an anti climax in real life but not the Alhambra as it was just a mind boggling experience and one which even if not a gardener would still thrill .

You can see immediately that the Alhambra is a garden that is meant to be used and enjoyed and it’s design has three main objectives , first to capitalise on the views as it towers over Granada and is built  across two adjoining hills , then to provide shade from the fierce Andalucia sun in the summer months and finally and probably best of all to provide water especially the sound of running water in every outside area of the Palace which it does through a combination of pools and fountains all designed to fit into the courtyards , some round , some square but the loveliest and most famous are the rectangular ponds  with water rills running from the higher levels through the entire Palace complex … a place to just sit and meditate or a place to impress visiting royalty in the 14th and 15th century when Arabic Emirs ruled all of Southern Spain … the original room outside seven hundred years before it became fashionable in Western Europe and just like in medicine and science the Arab world of the Middle East was way ahead of  garden design in renaissance Europe . 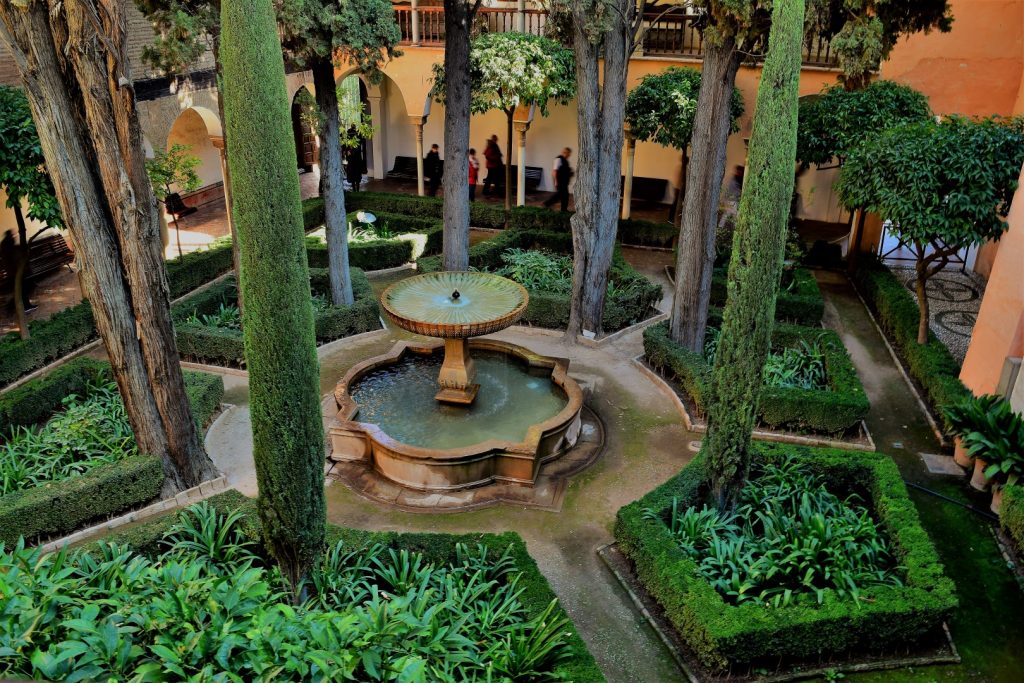 The Alhambra courtyards are built as oasis of shade and coolness , November 14th 2016

The Muslim garden was always designed in a way that allowed one to see and smell the flowers , listen to the water , feel and taste the fruit as you walked under the trees and our tour of the Alhambra certainly showed the best of Islamic architecture and gardening . 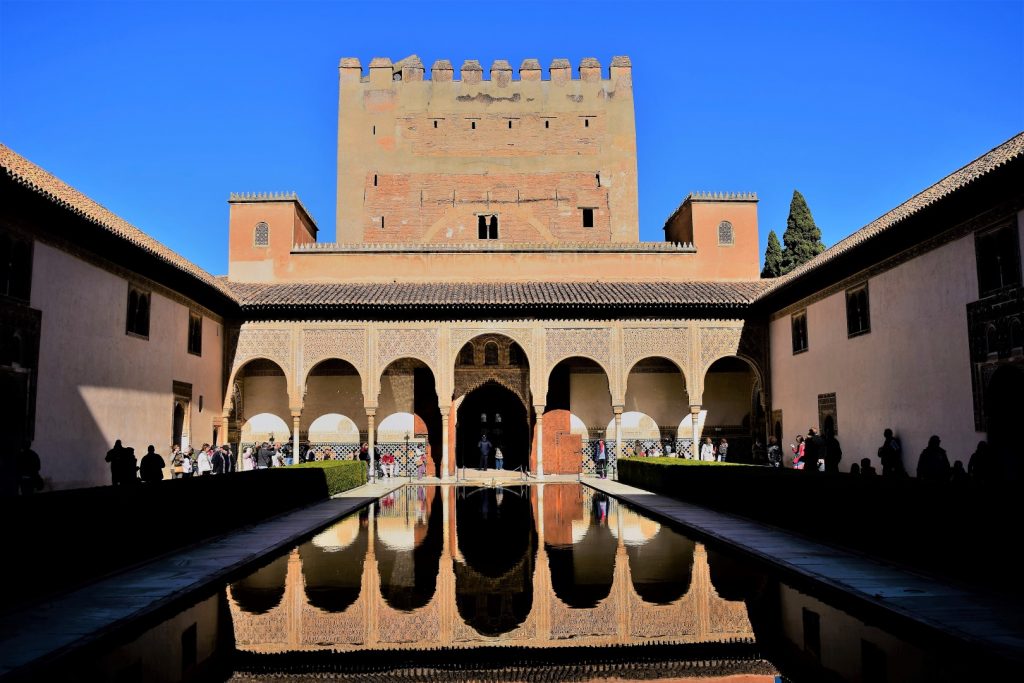 Designed to impress visitors in the 13th century , the Alhambra , November 14th 2016

Obviously then Islamic gardens are intended for hot climates and little point in having one in the West of Ireland where the wind and the rain sweep in daily from the Atlantic but that’s not to say that parts cannot be replicated here and immediately one thinks of Helen Dillon’s famous garden in Dublin with it’s large rectangular expanse of water but by and large they were designed and best suited for the Middle East , North African climate . 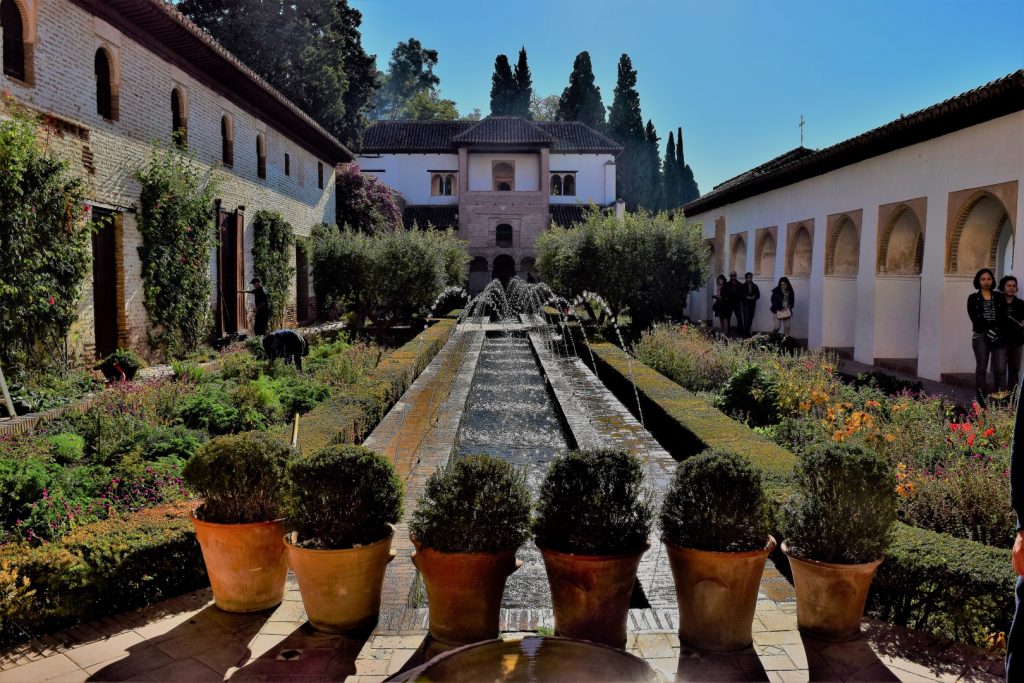 Granada and Southern Spain fell to Ferdinand and Isabella in 1492 ending seven centuries of Islamic rule but the Catholic conquerors recognised the extraordinary beauty of the Alhambra and moved in themselves instead of the usual torching that happened to a defeated enemy’s city in those times .

The Palace has some beautiful courtyards which were a necessary part of the design to cope with the Andalucian climate in summer and the most famous is the Courtyard of the Lions dating from 1050’s AD . 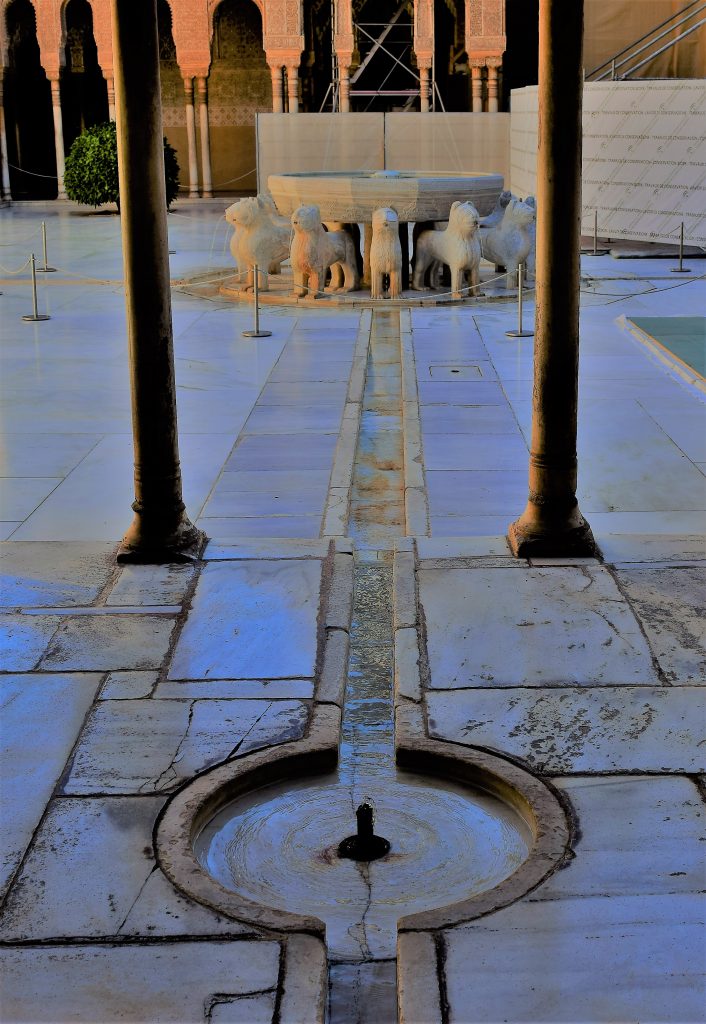 A closer look at the famous fountain 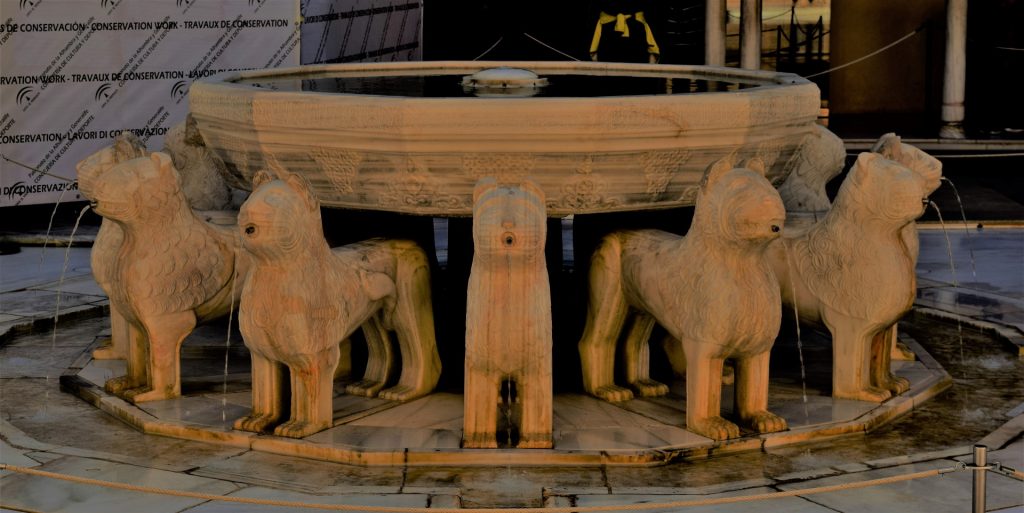 Carved from limestone in the 11th century , the Alhambra , November 14th 2016

I have always loved the remark of his mother to the last of the Moorish rulers , a broken hearted Emir Boabdil as he left Granada for the last time having lost all his land “ stop weeping like a woman for what you couldn’t hold as a man ” … obviously the Mrs. Thatcher of her day !! 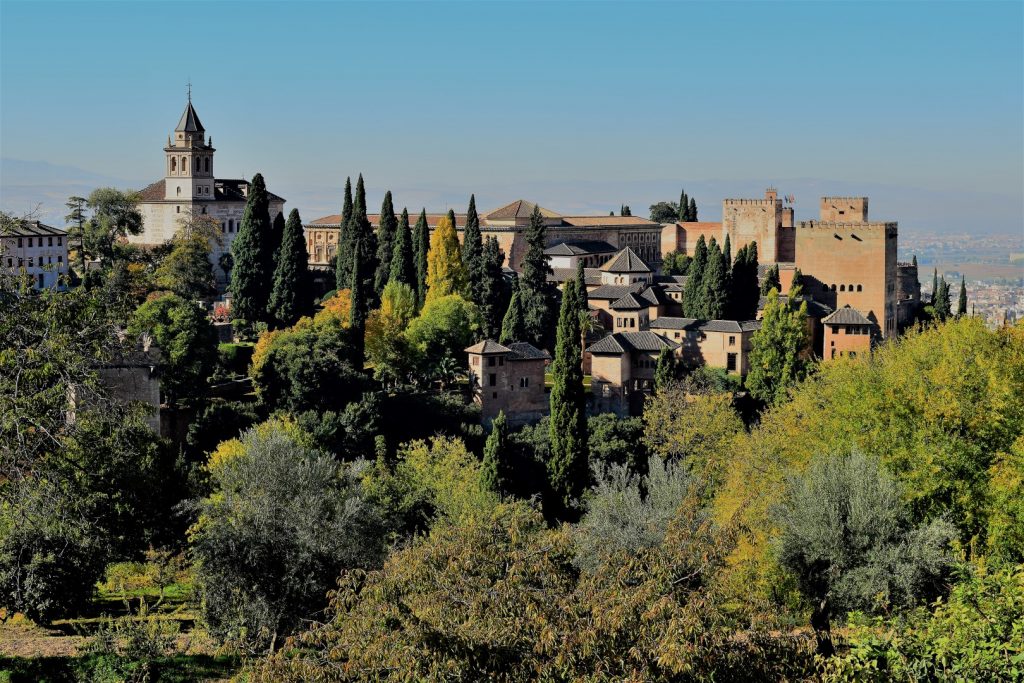 The Alhambra has about seven thousand visitors every day , seven days a week and you can only get a ticket by booking in advance online so no just turning up on a spur of the moment , the ticket is timed so no slouching around either and if you don’t arrive at each section of the garden within the ticket time allocation you are not allowed in … fairly draconian but the system works and the visitors move along smartly so you get to see everything without feeling you are in the middle of a throng of people and this works especially well at the famous areas such as the Princes garden or the Lion fountain .

That said  the time schedule for a visit to the Alhambra is not the best way to see a garden and what you do see is just a taster as you don’t get to see it at your own pace nor do you feel you can linger and even a photograph has to be pretty nifty . 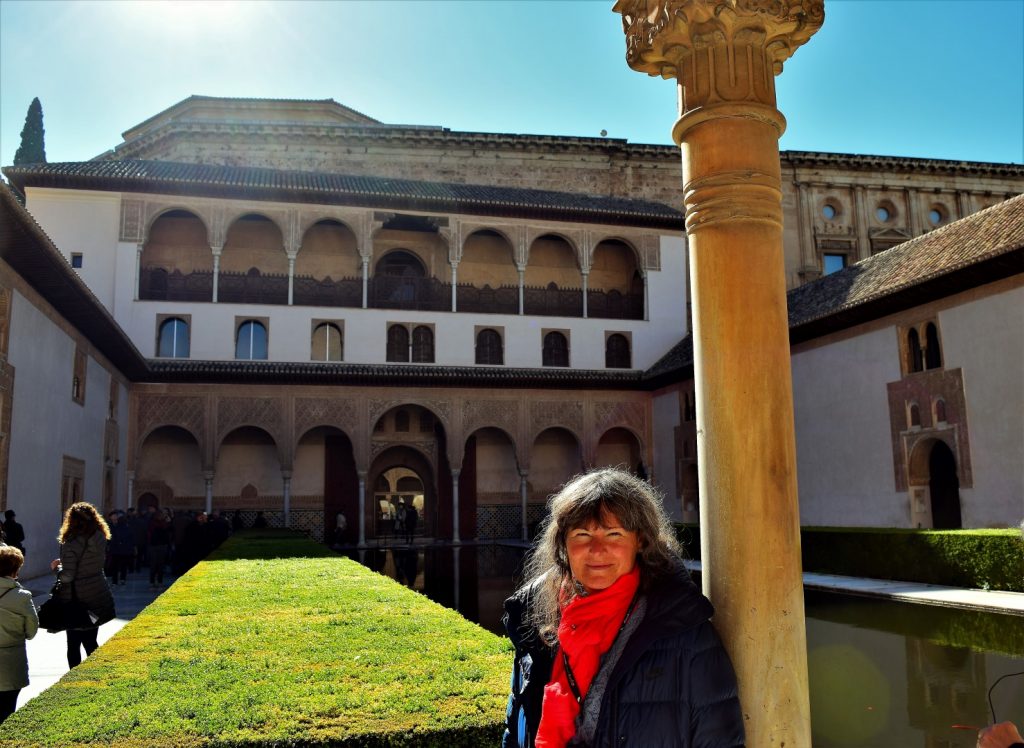 Snezana in the Palace of the Prince , the Alhambra , November 14th 2016

But for all the beauty of the Alhambra and it’s gardens the Royals also had to eat and quite a lot of the gardens are devoted to vegetables for the royal kitchens  and there are lots of pomegranate , olive and quince trees while there is good use of  orange and lemon trees along the paths for shade … this gardener was preparing to sow potatoes . 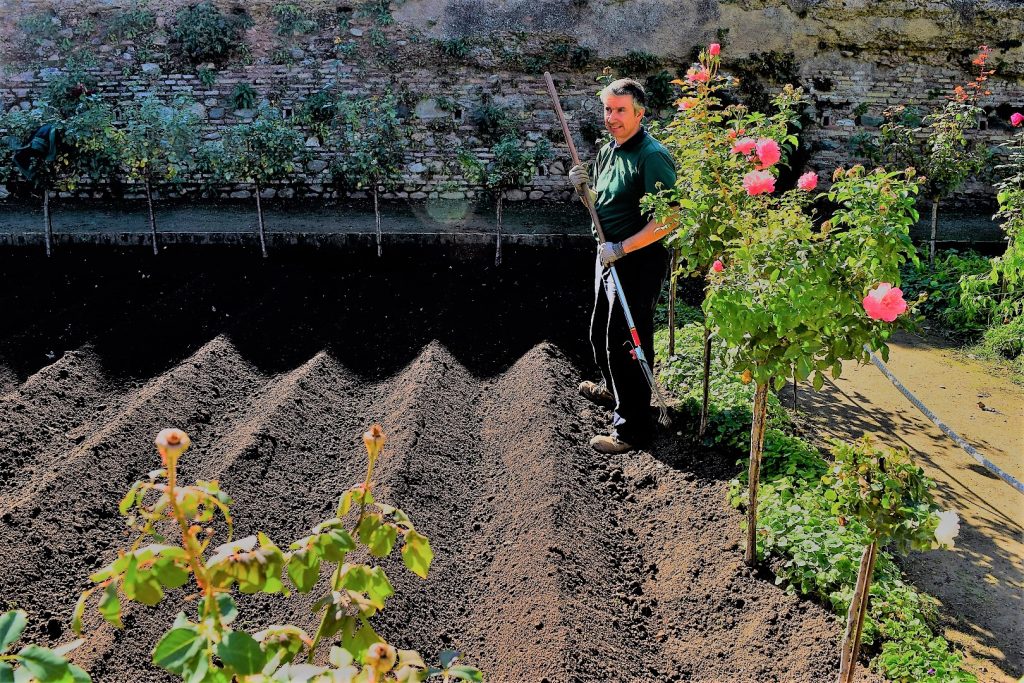 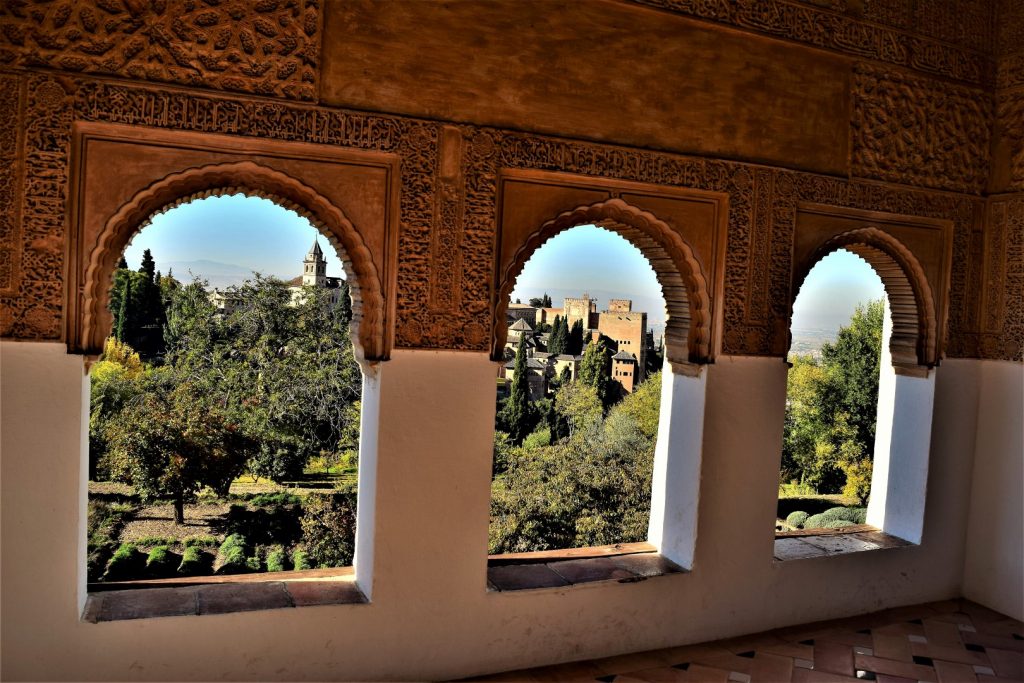 We also visited the gardens of Seville , Cordoba and Ronda and of these the hanging gardens of Ronda and the patios of Cordoba stand out and of course these did not have the huge crowds of the Alhambra where as you can imagine you were never allowed time to just meander or even to sit and admire a particular view .

The Spanish know how to look after their treasures and in Malaga they have housed the Picasso Museum in a renovated small palace on which they spent 28 million euros doing up … even the café is designed to be cool and I loved the simplicity of the long water rill they installed on the café terrace , only two inches of water in it with water bubbling up at metre intervals , very beautifull and a design we will keep in mind for here at some future time . 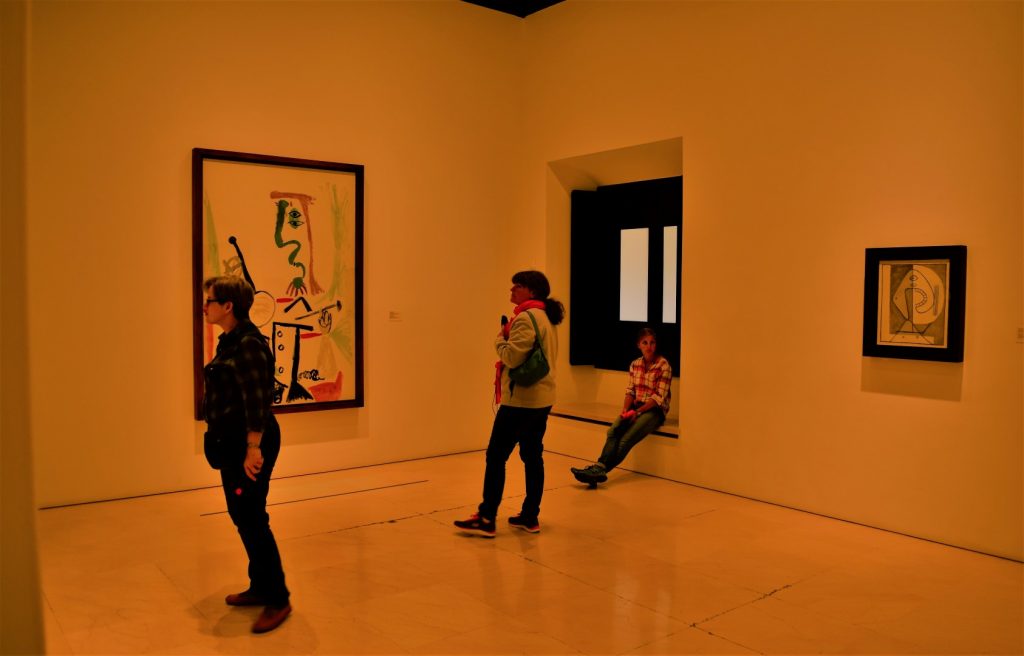 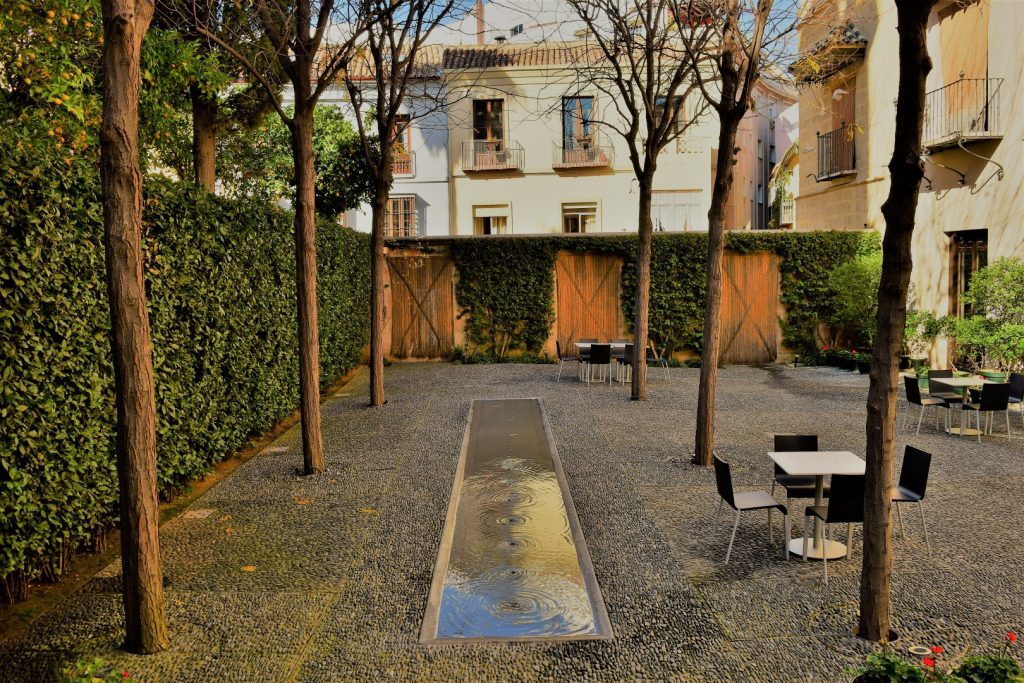 In Seville , the most important castle for the Moors in Spain , we visited the Alcazar which is in the centre of the city and unusually not on a hill which was the norm for defensive reasons and although neither the arab palace or the gardens match up to the Alhambra it has a more exotic planting and has been used as the backdrop for many of the Game of Thrones episodes and since I came back I have seen it in many scenes from the series… some lovely decorated garden pots throughout the garden and a more relaxed atmosphere . 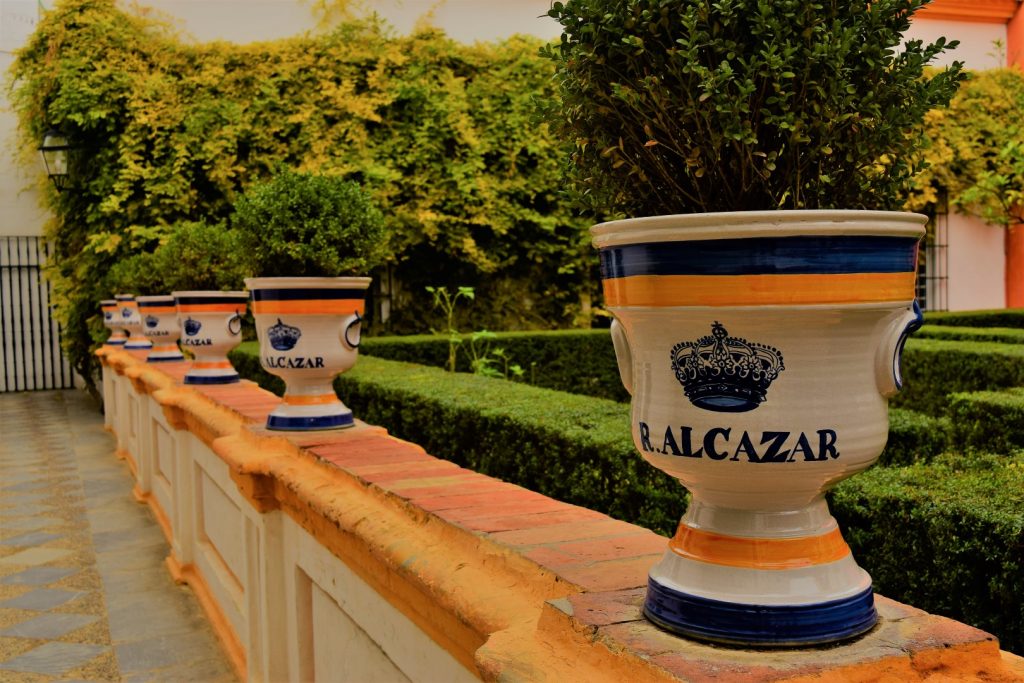 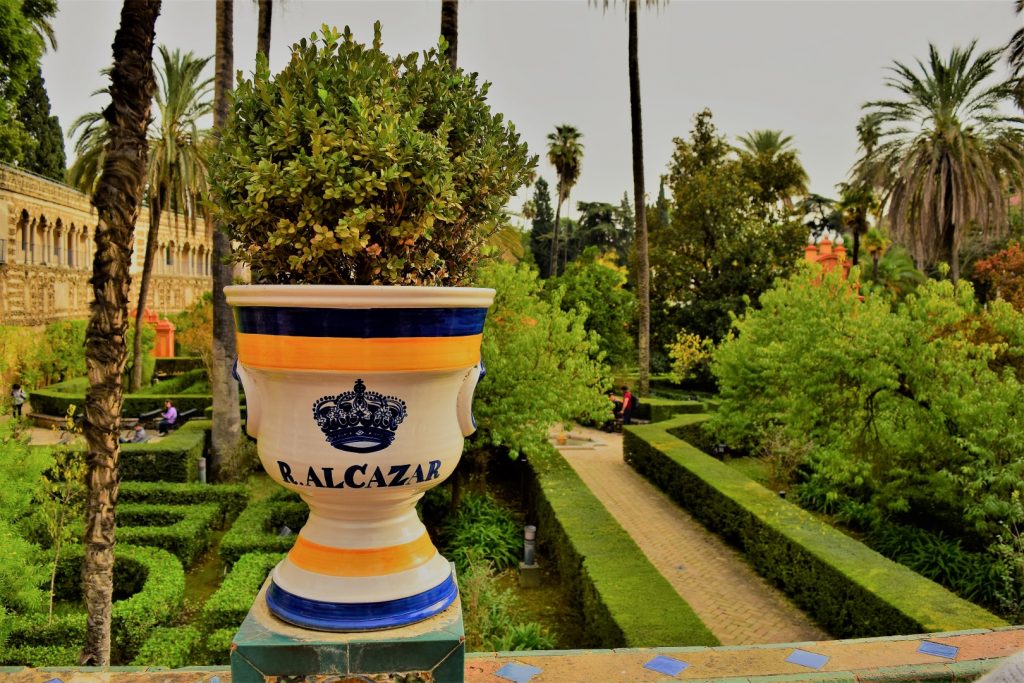 This is what I call a souvenir … not for sale though !

Ronda , one of the most famous towns in Spain and made even more famous by Hemingway ( who based his book  For whom the bell tolls there ) has a dramatic setting as the town is divided by a huge gorge over 150 metres deep crossed by three bridges , the New Bridge is over 200 years old while the Old Bridge was built by the Arabs in the 1300 ‘s and the Roman bridge is almost two thousand years old and along the top of the gorge there are several “hanging ” gardens , the best known is the Arab garden , Palacio Del Rey Moro , which we visited and which does indeed hang down into the gorge with magnificent views across the gorge … very simple planting here as the view was the thing not the shrubs or trees but still incorporates the Islamic love of water with a series of narrow rills running throughout the terraces . 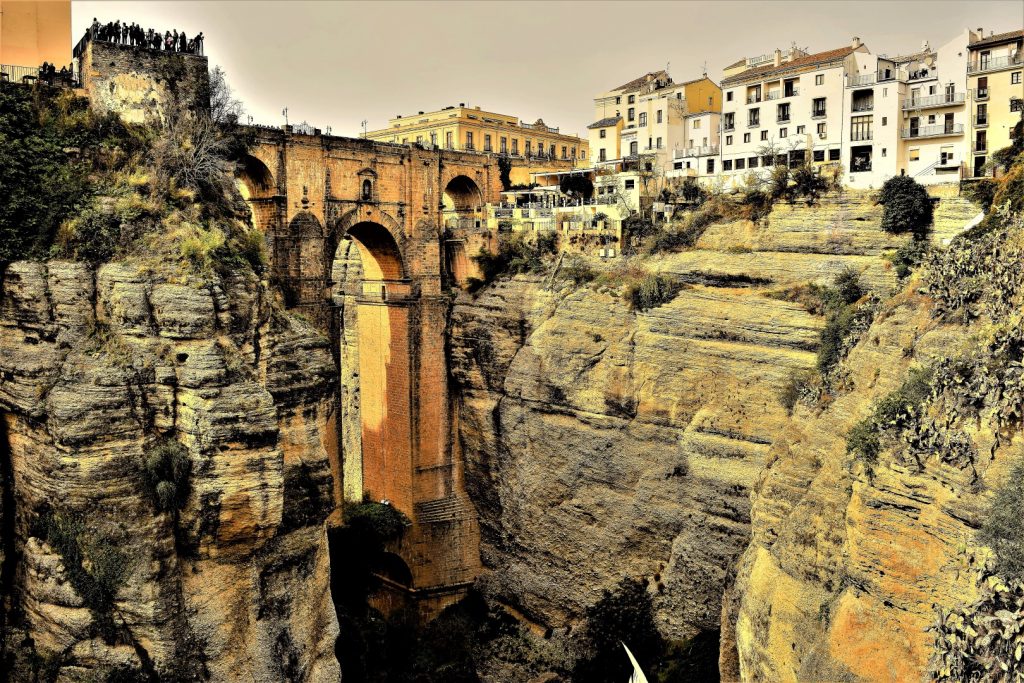 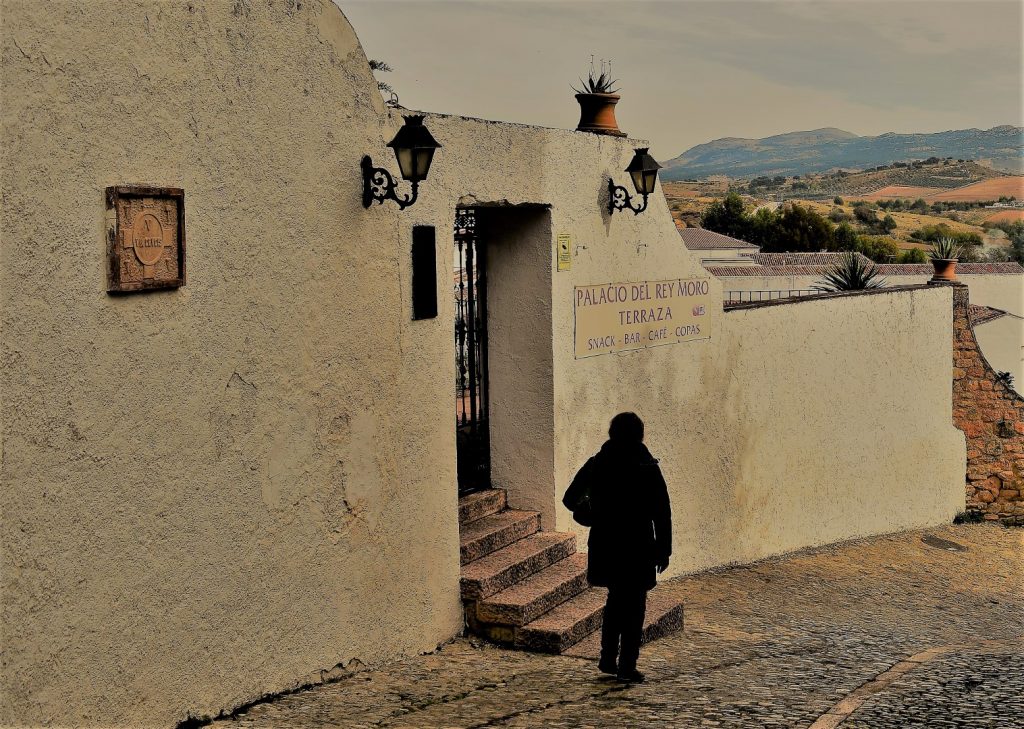 The Palace garden of the Moorish King at Ronda , November 13th 2016 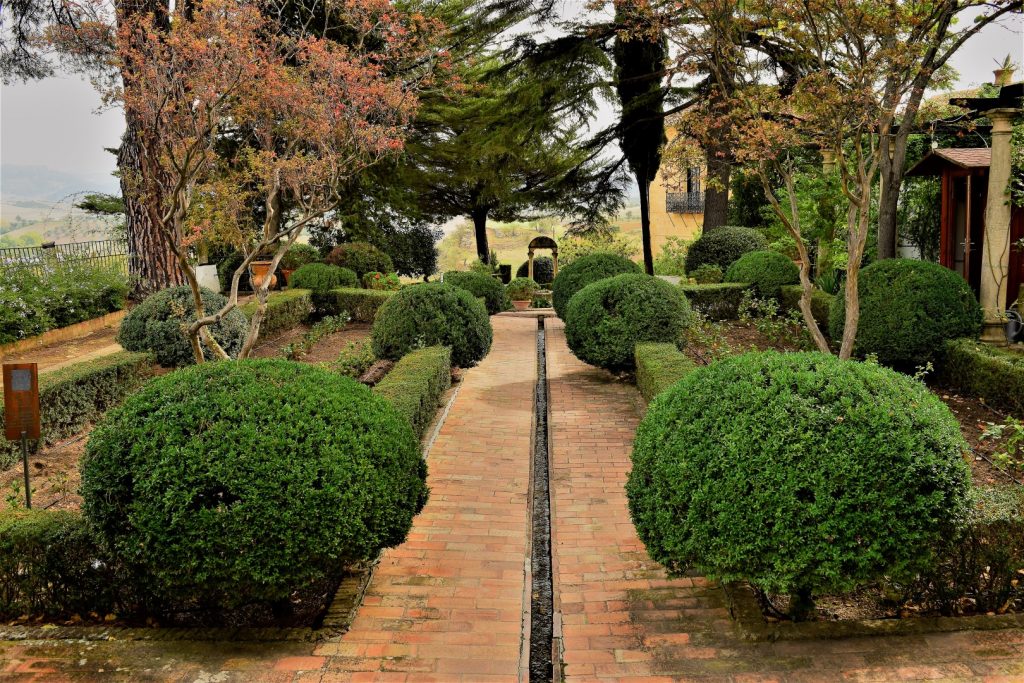 Cordoba was my favourite town of the visit with a famous Jewish Quarter and it featured in Monty Don’s 80 Gardens of the World BBC series , no big laid out gardens here as Cordoba is famous for it’s patio gardens which are all decorated with blue pots and many are open to the public all year  round . The cathedral in Cordoba contains the tomb of Ferdinand and Isabella who sponsored and funded Columbus on his voyage to America and who ended the Moorish conquest of Spain in 1492  and Cordoba’s Roman bridge has also featured in Game of Thrones . 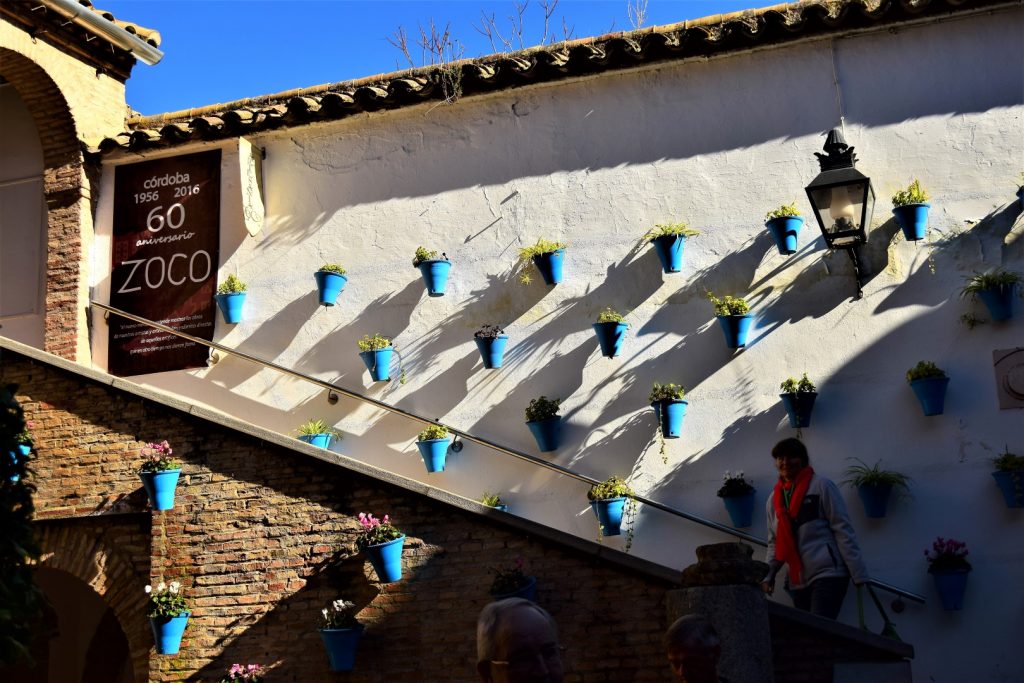 The Roman Bridge in Cordoba 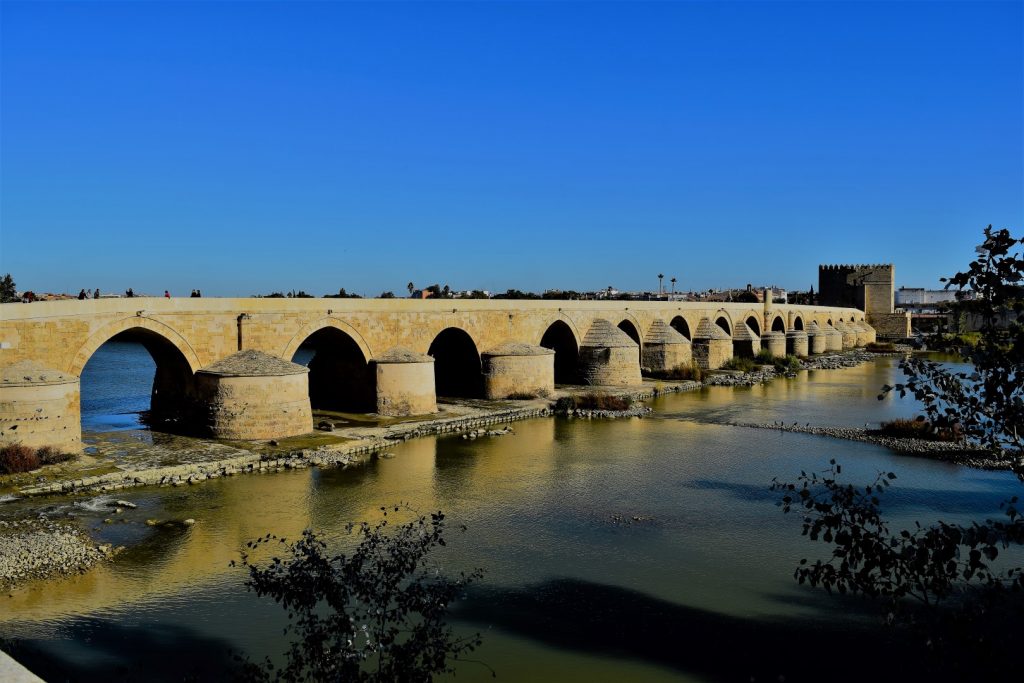 However the Cathedral in Cordoba is most famous world wide for it’s Moorish Mosque , the Mezquita , dating from the 8th century AD and which was so beautiful that the Catholic Spanish Monarchs on capturing it from the Moors in 1242 decided to preserve it and built their cathedral on to it and here you can now walk from Moorish architecture at it’s best into the Catholic renaissance architecture … I must say that the arab simplicity without any of the cluttered statues and heavy baroque paintings of the renaissance side works better in my view . 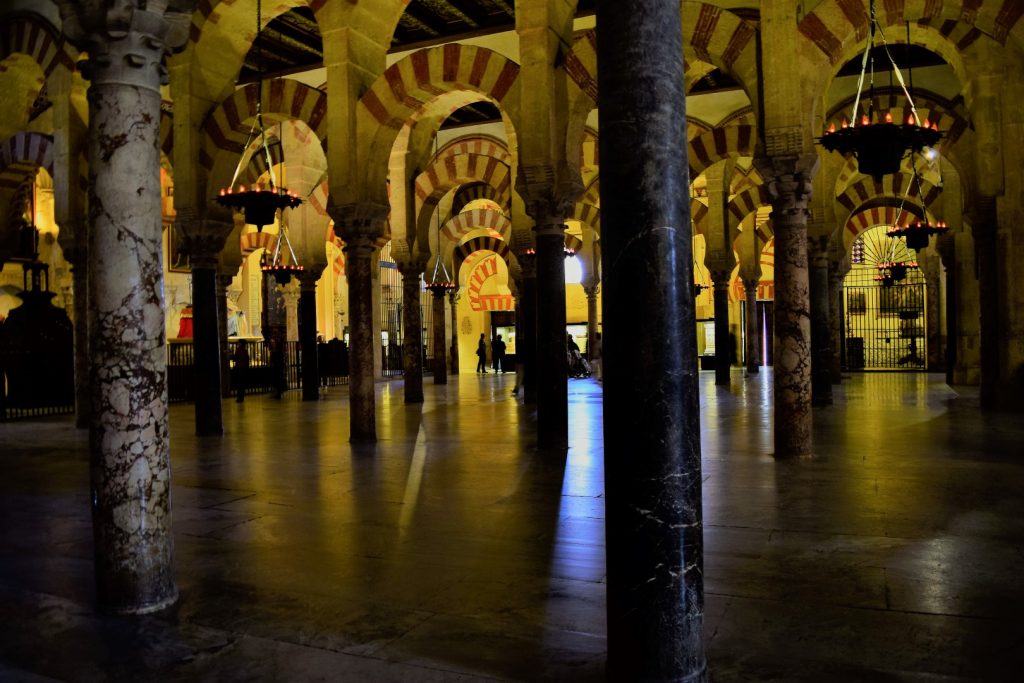 Highlights of the trip to Andalucia ? Impossible to say as there were quite a few but as I have  said Cordoba was my favourite place and I could easily live there but for sheer beauty it has to be the Alhambra palace complex and gardens while Ronda with it’s town perched on both sides of a 350 foot gorge linked by three ancient bridges has to be unique but that leaves out Malaga where possibly because it was our last day of a hectic schedule we found it to be a very laid back place where there is no need to visit must see places ( apart of course from the Picasso Museum ) and you can get entertainment enough from sitting at one of the outside cafes eating tapas and watching life go by largely free of tourists .

Finally outside the small town of Antequerra sits this most unusual mountain which has the outline of a sleeping giant called La Menga  and it seems no coincidence that one of the most important dolmens in Europe dating from 3000 BC  was built by neolithic people just opposite  … check it out ! 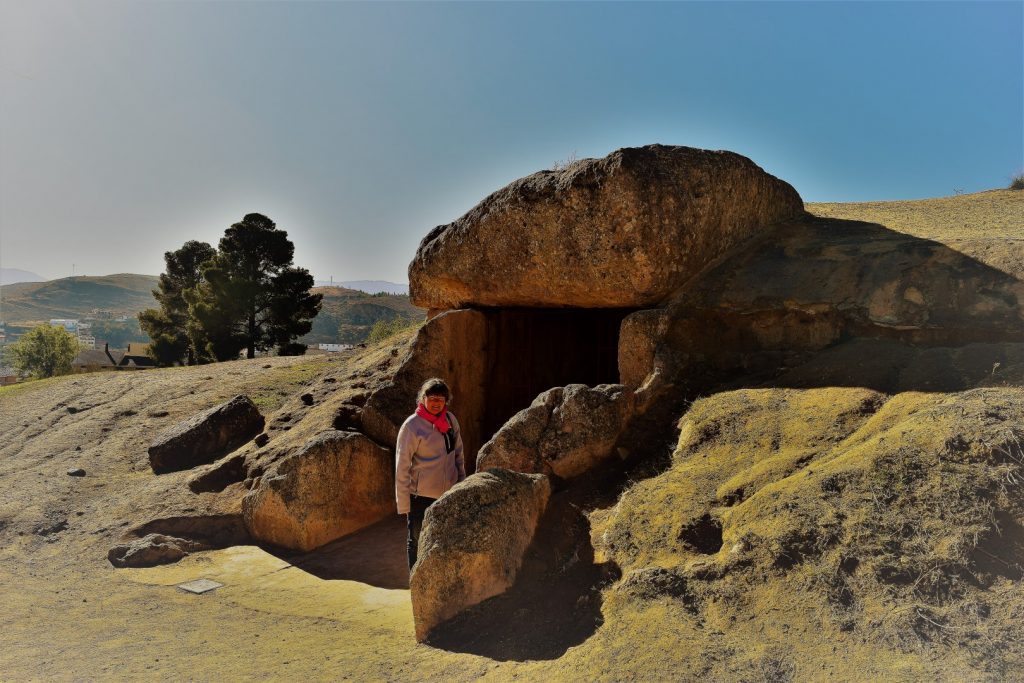