This is the first May in over 20 years that I have spent in Ireland and I have been bowled over by the colour and the vibrant greenness and now when asked what is my favourite month in the garden I can answer without doubt that it is May ! 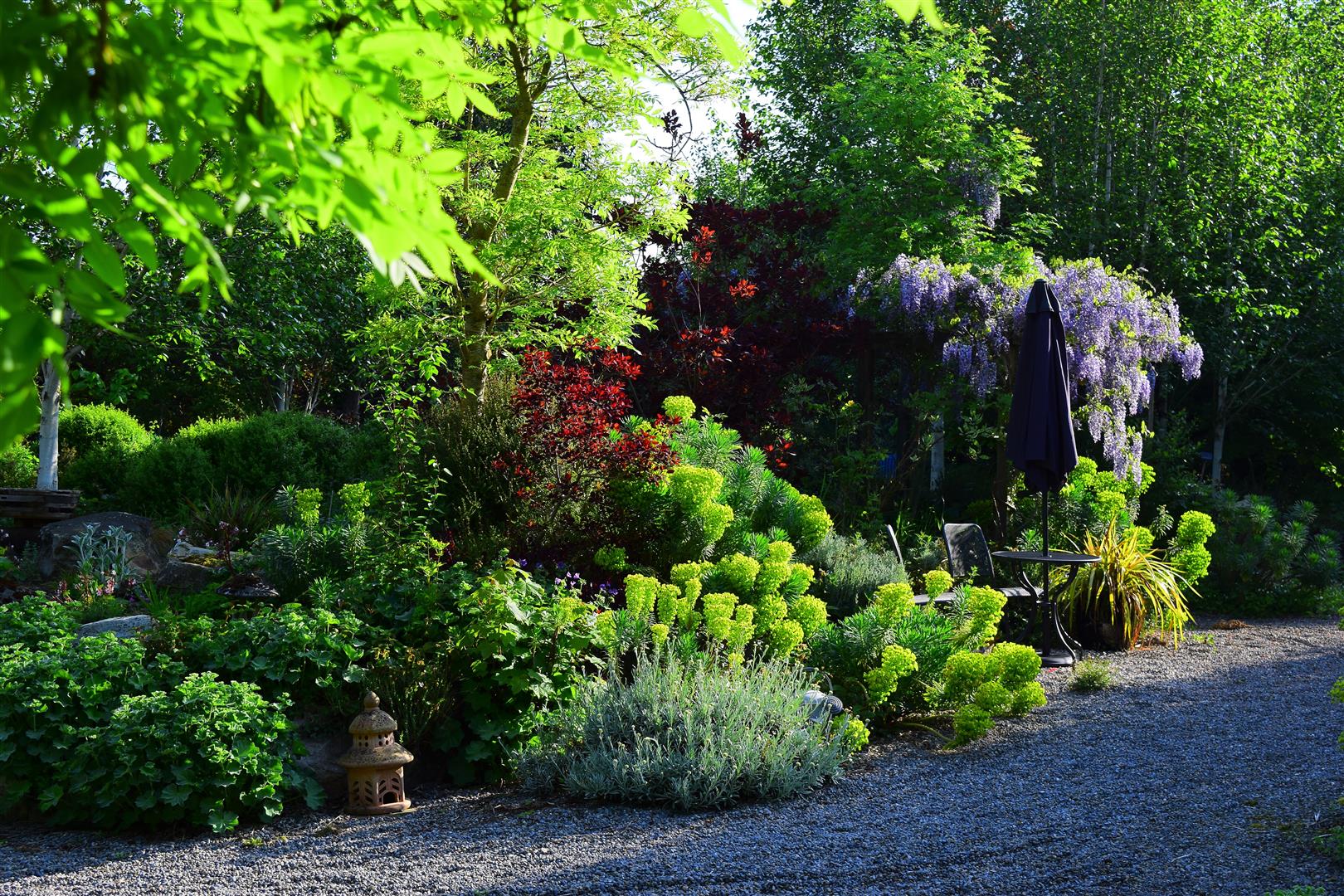 Wisteria even though originally from China is forever associated with English gardens and although in flower for only three weeks it is a magnificent climber , new plants are slow to come into flower and will need five years in the ground but the leaves even when not in flower are lovely and if you have a pergola you have to have a wisteria … blue is the more famous colour but you can get a white flowered wisteria also and they are pretty tolerant with soil but need as much sun light as possible . 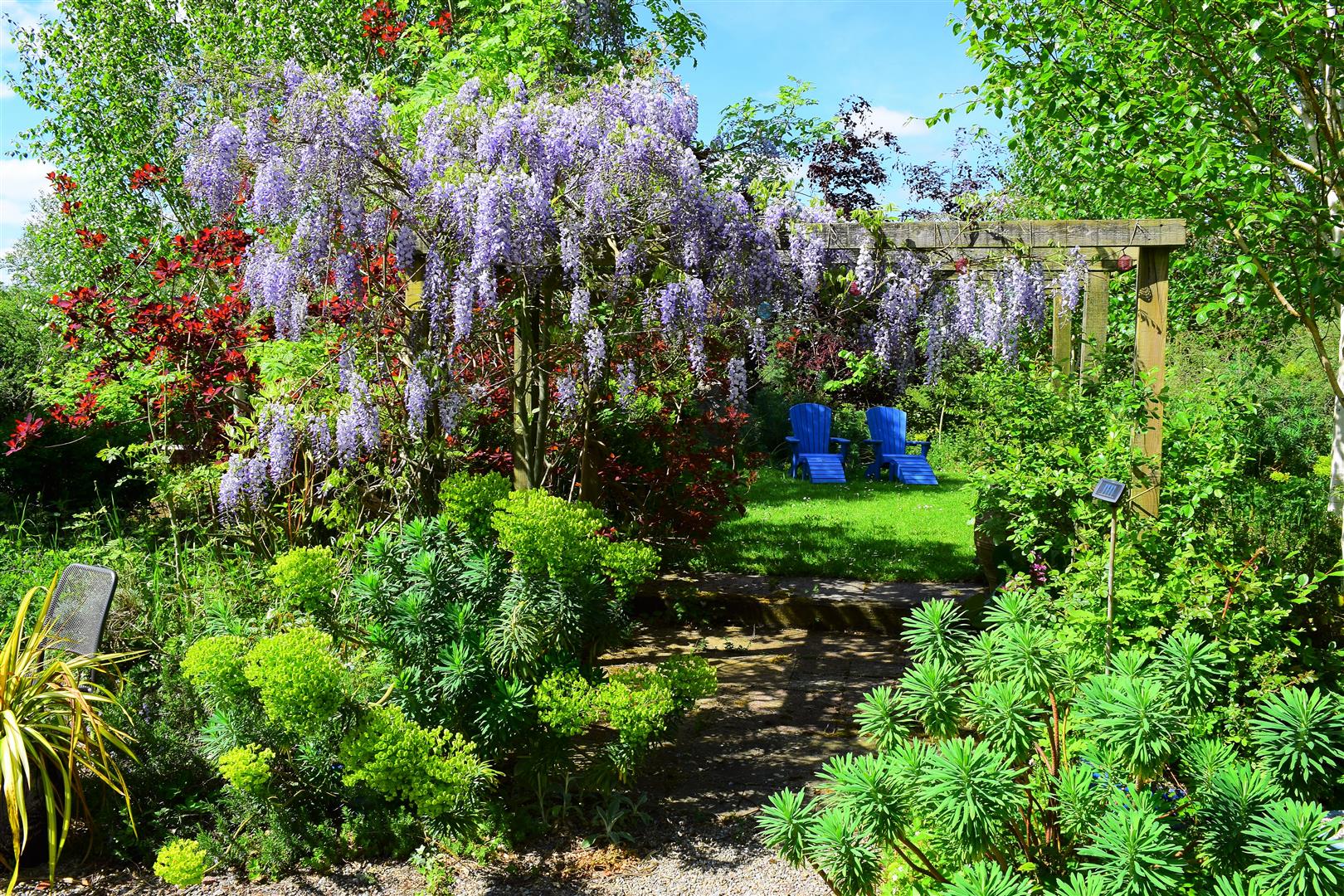 I am a great believer of adapting to the conditions in the garden and not fighting wetness as for example where last month I detailed the installation of a new pond in a location which was very wet  and this month it was the turn of the japanese knotweed  which luckily is confined to an area leading down to the main garden area from the immediate back garden . The knotweed came in with a load of top soil back in 2004 and has not spread further because of the wet conditions, a lovely foliage plant which under normal conditions would be among the top ten of perennial plants , normally hugely invasive , it has attracted a fearsome reputation in the construction industry and inspired dread among the general public to the degree that even gardeners recoil at it’s very mention … when I first saw it growing here I researched it , saw that it was a really fabulous structured architectural plant which when it first appeared in England imported from Japan in the 1850’s was declared plant of the year by William Robinson , the doyen of wild life gardening .

I let it grow and then cut it into a tunnel which linked the top garden with the lower gardens and I really liked the effect of walking through the deep shade of the natural leaf out into the light of the next area however a lot of  visitors to the garden were not fond of the effect and thought it a little threatening . Snezana was never too keen on the knotweed tunnel and hated the untidy way in which the plant died back throughout the winter and was always hacking away at it whereas I could live with the untidiness … this year she made a determined effort in March to clearing away all the old dead debris and opened up the entire area for the first time which I kept telling her was a waste of time and effort as the knotweed would burst into life at the beginning of April and grow almost a metre a week … but here’s the thing , I liked the new wide open entrance to the rest of the garden and I loved the new view down into the lawns and the silver birch so we are now going to keep the knotweed down by regular cutting with the odd bit of weed killer thrown in … I am often accused of being too set in my ways and whisper it , too stubborn , so my fellow gardener here is in deep shock at my about face on what has been a loved feature in the garden for the past twelve years ! 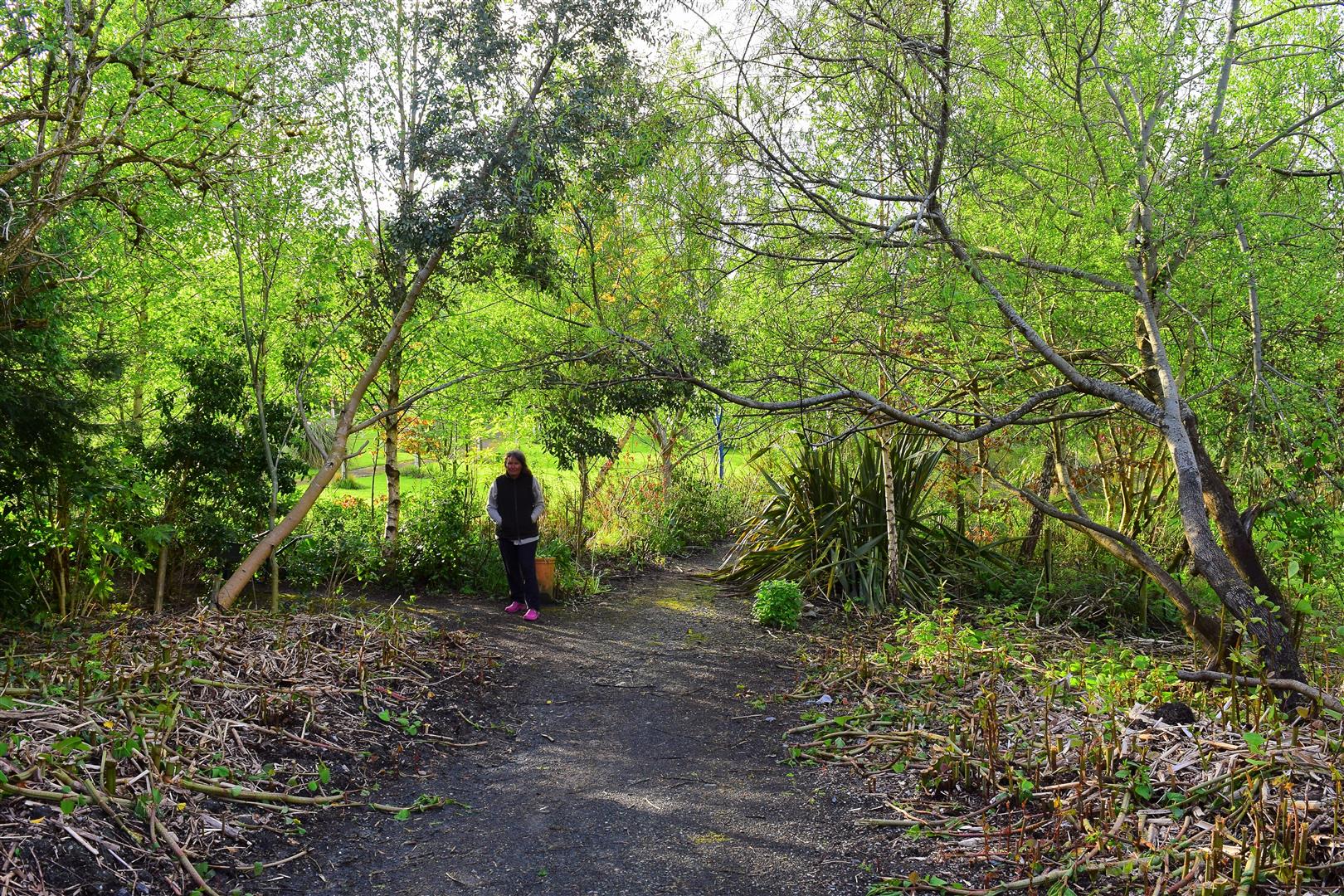 Snezana’s cutting back of the japanese knotweed has opened up the view into the Lower Field , May 7th 2018

May is the month where the hostas come into their own and to get them to this stage with their leaves intact you need to have been looking after them like a new born baby as May is also the month that slugs have been looking forward to all winter ! The recent referendum in Ireland on the 8th amendment has nothing on the war of words between the organic tree hugging eco warriors who have declared war on all preventive methods against slugs and want to ban the little blue pills of slugtox but for the rest of us and I include most professional gardeners in this there is no decision  … blitz the little f..kers from the time in early April that hostas push up through the earth !

Hostas originated in China and Japan and were brought to the UK in the late 1800’s by plant hunters , they do best in damp conditions in partial shade and even though our climate like the UK would not be known for sunshine , hostas are not great in full sun and can wither a bit and end up looking brassy . Because  the general public will now only buy plants when in bloom hostas are brought on early under glass by the growers with the result that you buy hostas now in May and even in April with a fully grown head of leaves that of course have only been out in the open for the best part of two weeks and invariably the hostas wilt and never really recover , they will be fine next year but you can write off the first year . I buy my hostas from Sweeneys Garden Centre in New Ross as he grows his own stock and you can buy in March / April plants that have been grown outside and you will get a good performing hosta even in it’s first year in the garden plus he specialises in the big leaf varieties especially elegans and I have been buying mine there for years  and with my trip to New Ross last weekend he produced an unusual one off pot of aureomarginata which had the variety patriot mixed through it which will produce an unusual combination of variegation that I am looking forward to seeing in full bloom and which I will split myself for next year as both patriot and aureomarginata are the best variegated large leafed hostas . 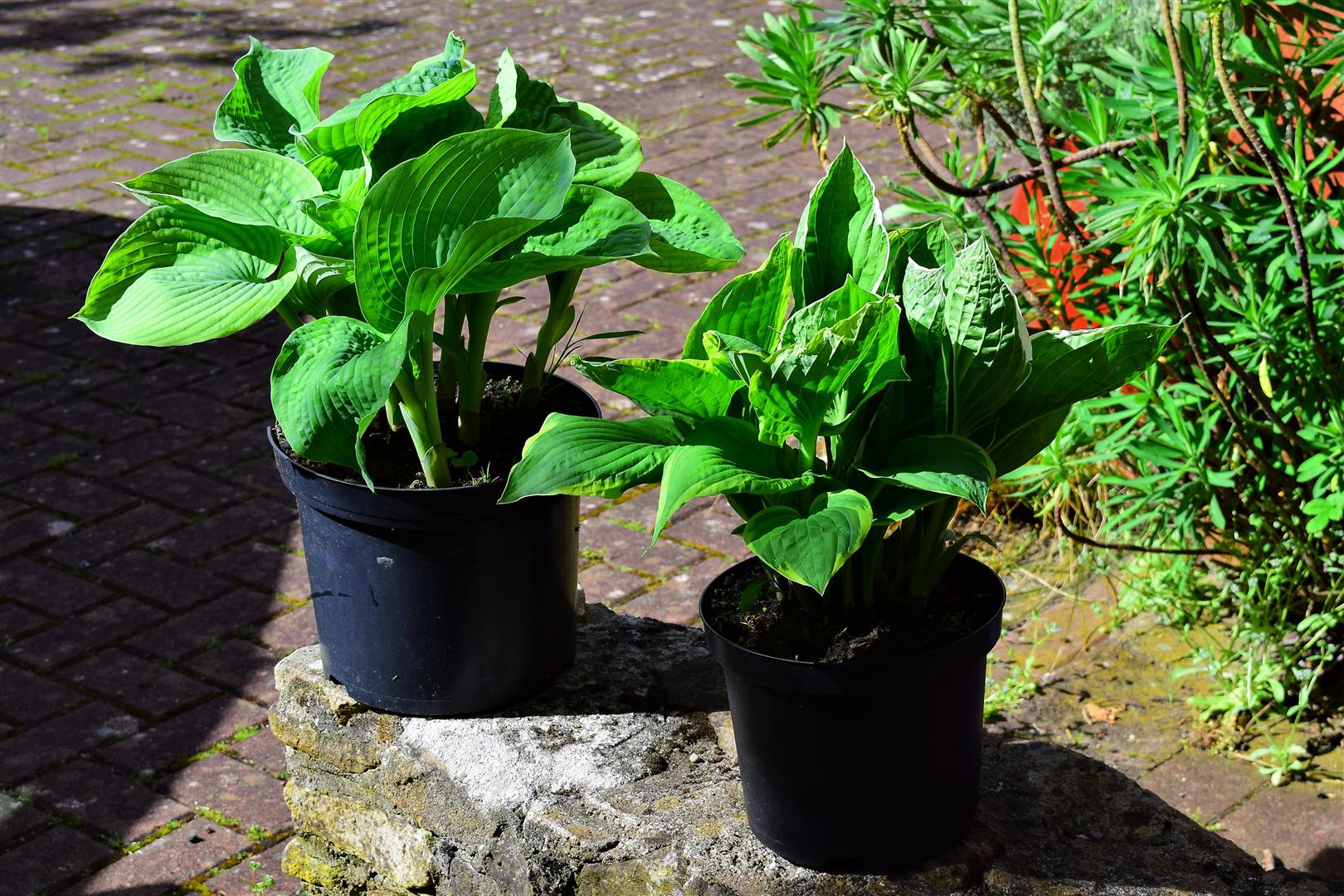 Latest hosta buys, Elegans on the left and a mix of Aureomarginata and Patriot , May 20th 2018

There are literally hundreds of varieties of hostas on sale however for me I am pretty definite on what I like in a hosta which is the big green leafed sieboldiana type such as Elegans and although I do not like the variegated type generally as I find them brassy looking especially in full sun , I do grow Francis Williams and Patriot in shade . 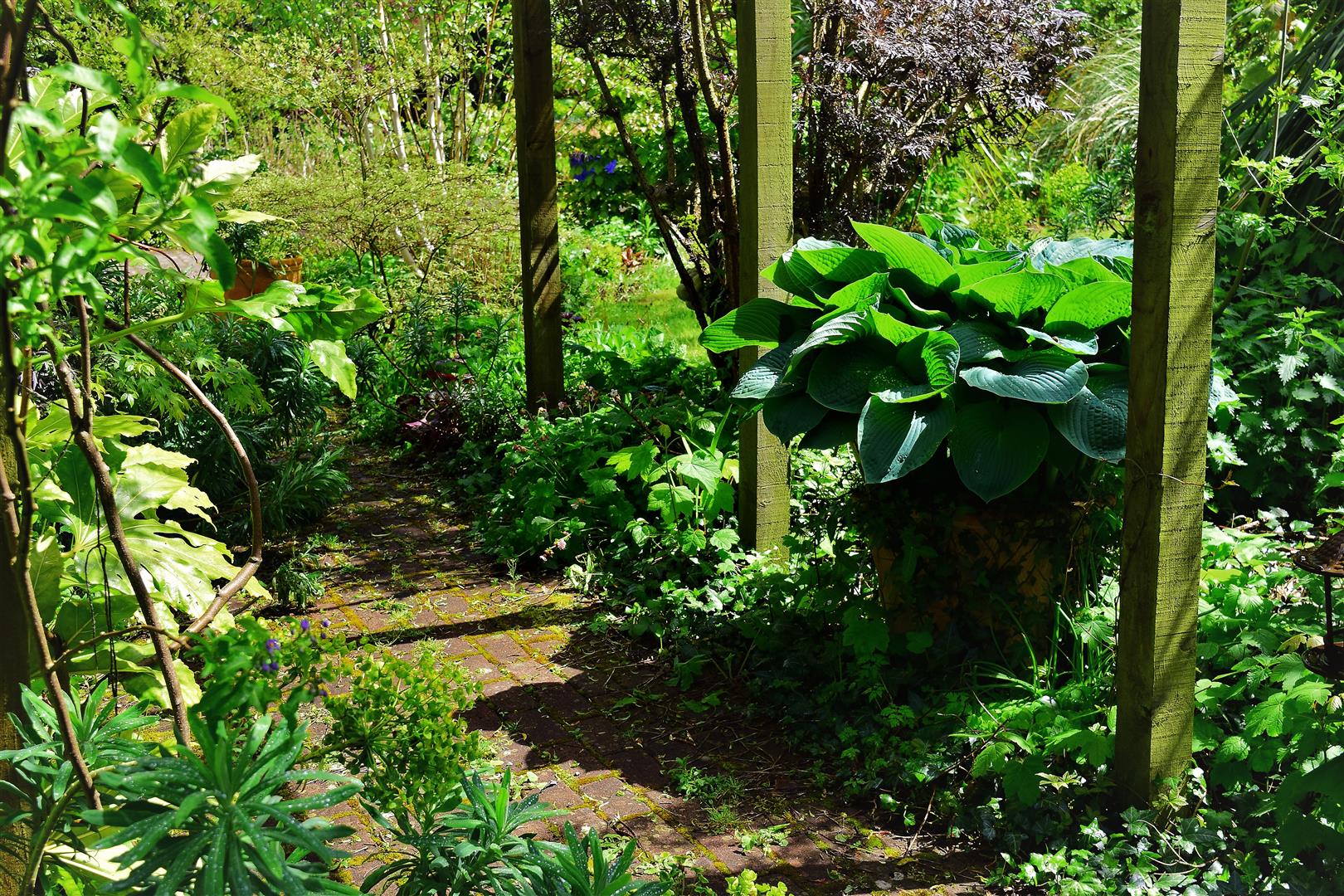 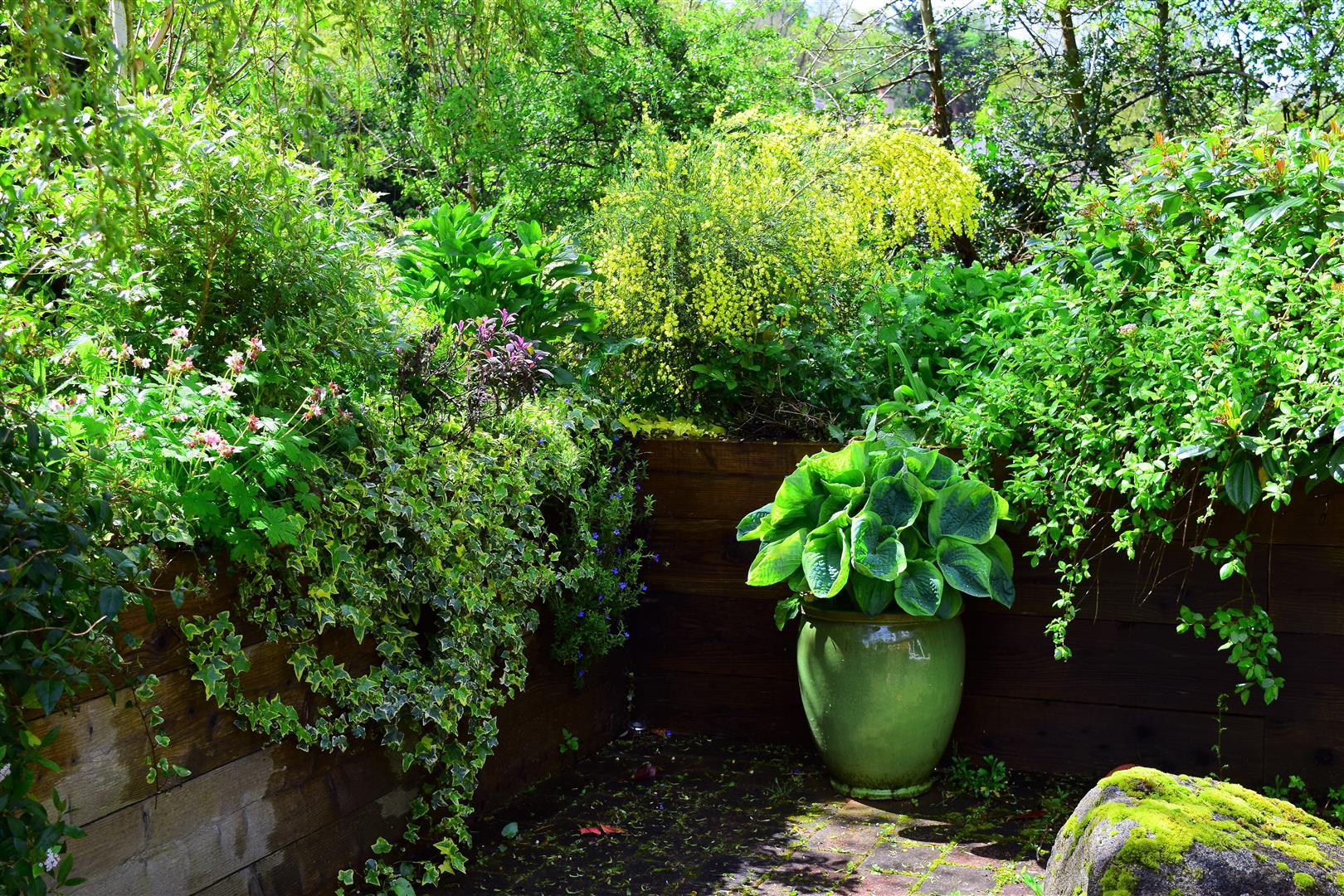 Lat June I bought two variegated hostas , Gold Standard , which was first produced in the US in 1976 when it sold for 85 $ a plant until it became less rare and June which was hosta of the year when introduced in 1981 again in the US where they have always been hosta mad and where new hybrid varieties come on the market every year and which are difficult to keep track of as they tend to follow trends in order to be saleable but which in my view are all much the same with only slight variations in leaf colour to justify being trumpeted as a “new ” hosta . Anyway my June and Gold Standard were bought and planted late in June 2017 and having been brought on under glass stayed in leaf for only a few weeks and looked pretty sickly until November but this year they are back to full health and jumping out of their pots .

The variety June is a great plant , great big leaves and a soft shade of variegation but really needs the shade , perfect for a pot and I am delighted with it . Gold Standard I am not so sure of as it is a bit brassy for my taste even in the shady location and I may move it next year out of the pot and into the  back of a shady border and it may look better peeping out of vegetation rather than as the centre of focus in a pot . The variety Halcyon is a smaller grey leaf hosta that is another favourite of mine which does well in the ground and in a pot . 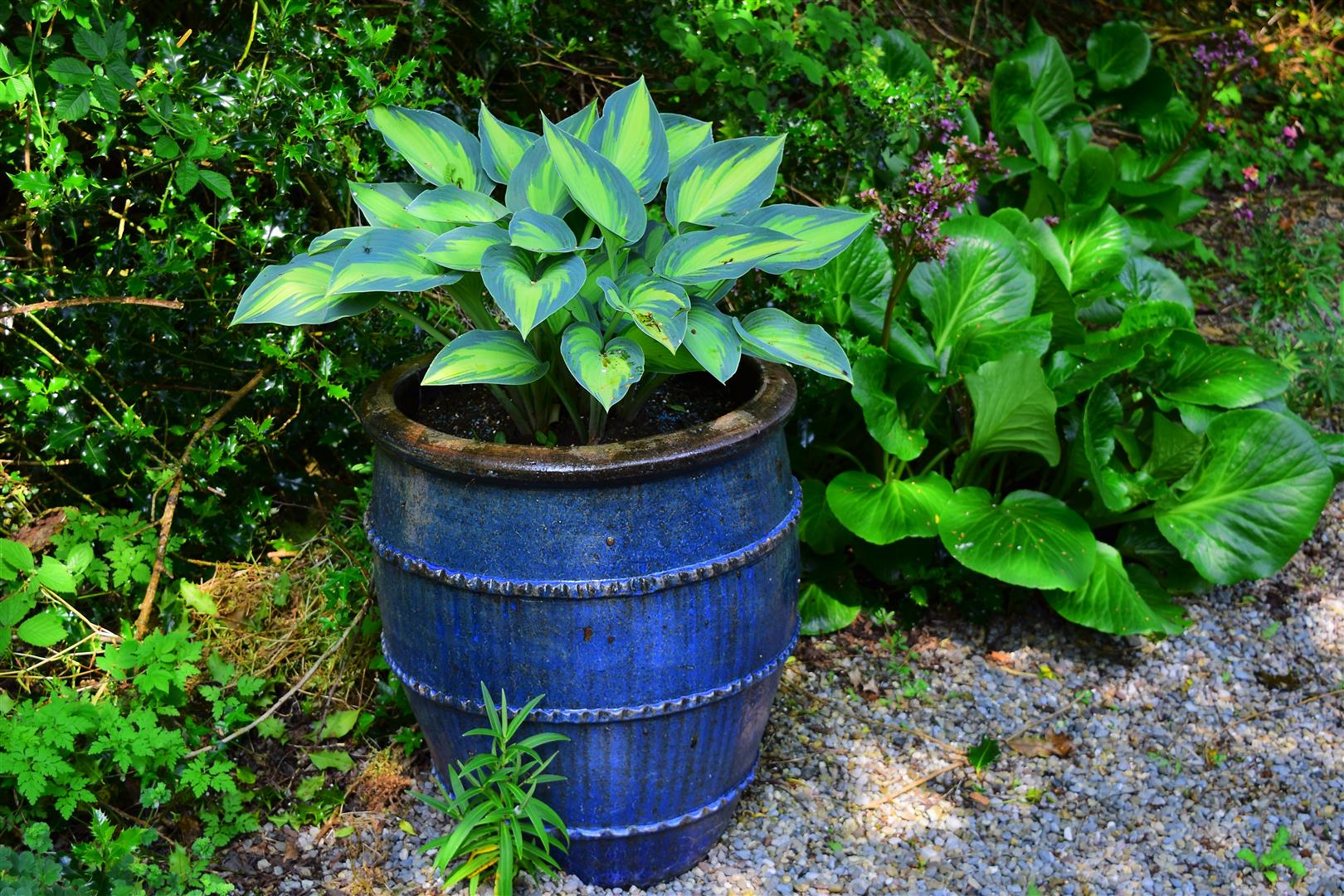 The new pond laid out in early April is settling in nicely and becoming part of the landscape between the two lawn areas down by the Tree House and it helps that there is no hard landscaping involved here with no paving as my plan is to have the lawn merging into the bog garden planting around the water . The planting will not include any tall plants so as not to interrupt the sight line so iris’s and bull rush types are out and Clonmel Garden Centre by coincidence have this year increased their water plant section tremendously and each month are displaying new plants although I must admit I am a total novice when it comes to knowledge of water marginals and apart from water lilies and marsh marigold and am out of my depth in deep water plants … literally as I have already fallen in twice when planting ! 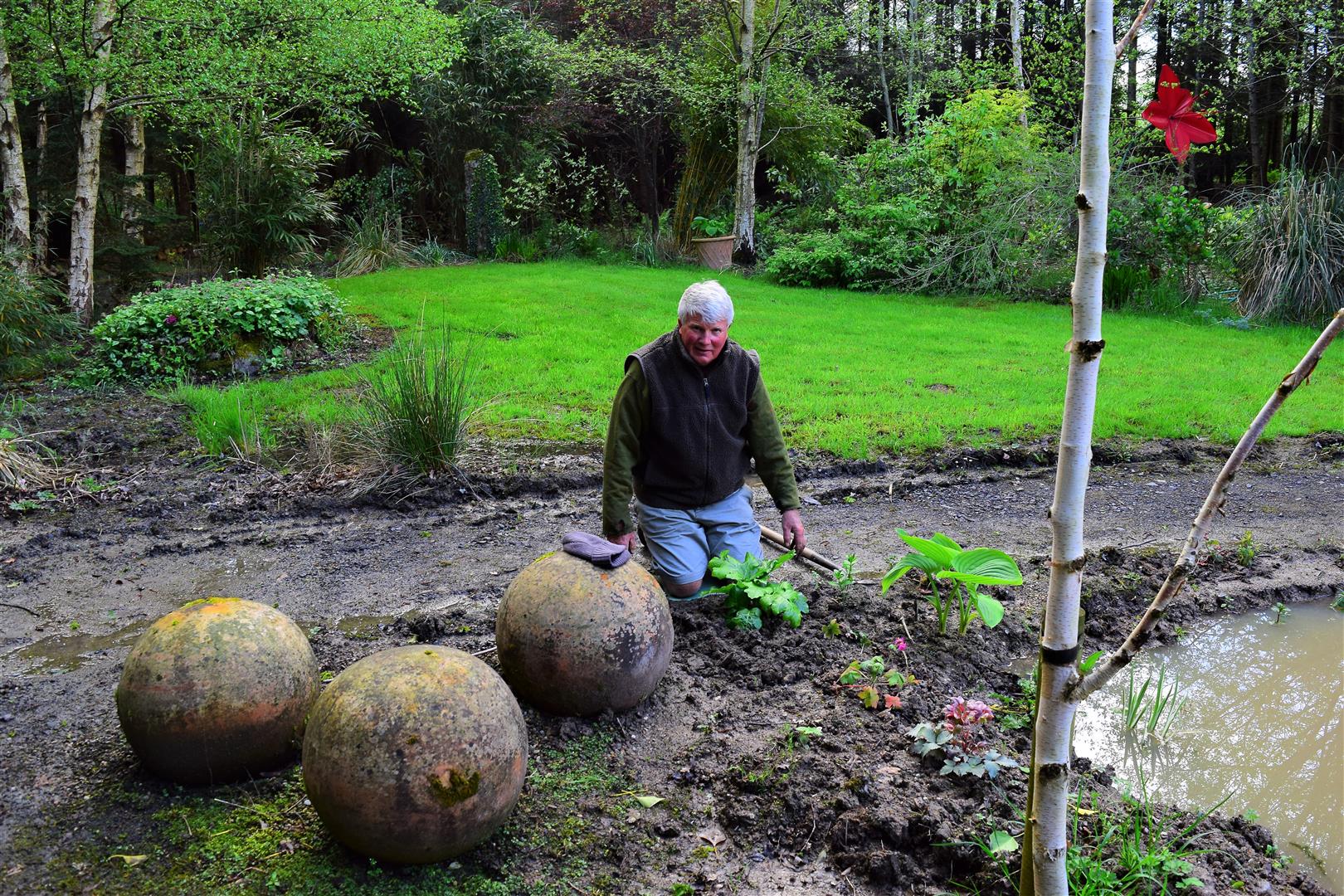 Plantago aquaticum , lysichton camtschatcensis , hydrocotyle, potentilla palustris, orontium aquaticum, persicaria amphibia mean anything to you … me either but their common names alisma , white skunk cabbage , pennywort , marsh cinquefoil , golden club , amphibious give a better clue that they all like damp conditions and these have all gone in this past week bought at a sale in Clonmel Garden Centre … they are not much to look at right now but give them a few months in the shallow water at the pond’s edge and they should romp away .  I have often written here about the American skunk cabbage but this is the white flower version which I have not seen before and like the more usual yellow flowered version this will take several years to look anyway decent but then it is magnificent as a water’s edge architectural plant and the huge paddle like leaves stay standing most of the summer . 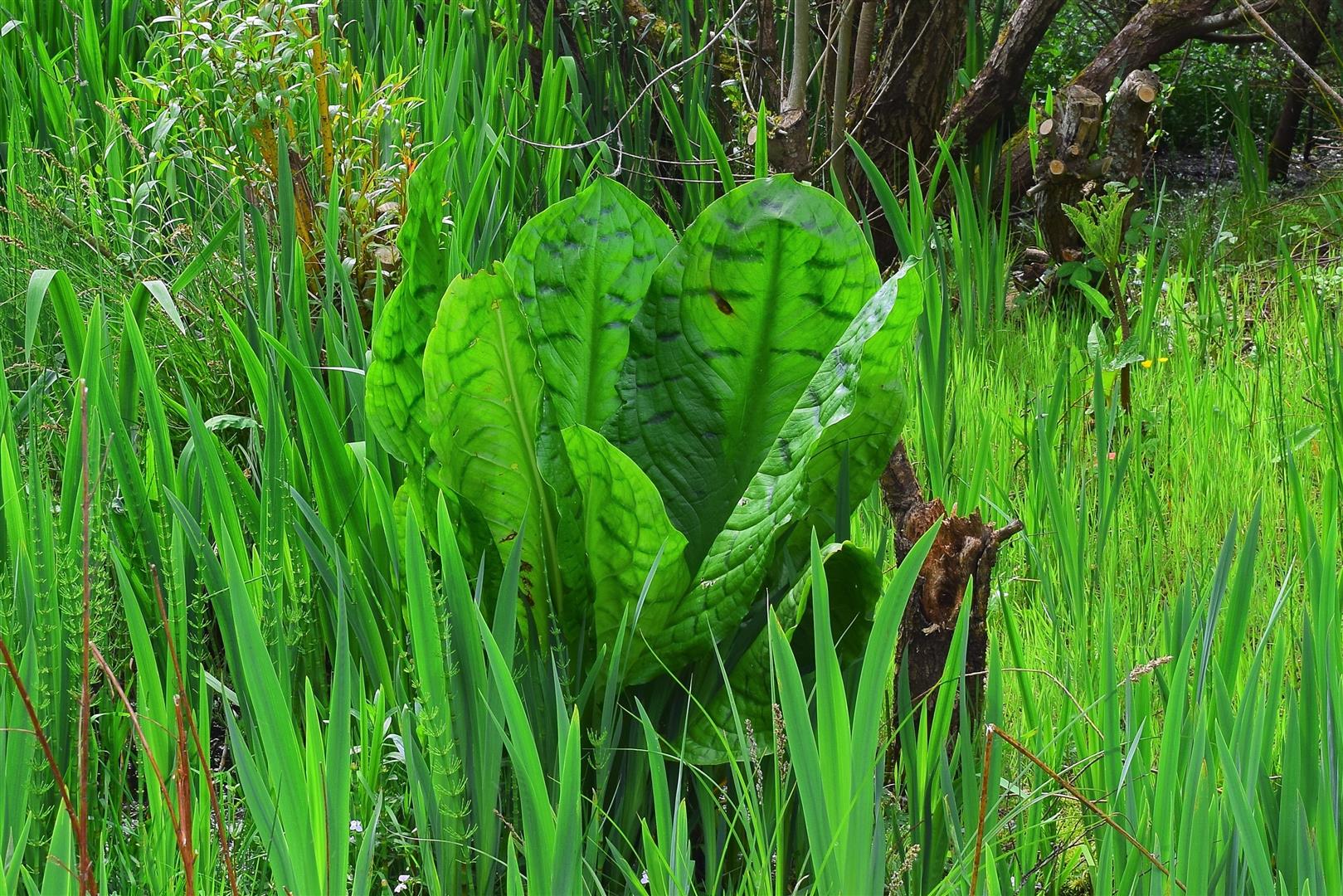 A fabulous architectural leaf , the american skunk cabbage , the bog garden , May 21st 2018

A few new additions to the garden infrastructure in the past few days and a sad goodbye to a wooden bench which was one of the first purchases back in April 2006 when I saw it at Manor Stone in Littleton when buying some large rocks and even though I maintained it with coats of paint every year or so , this year when we began to paint it some pieces fell apart and from now on I won’t be buying anymore wooden garden furniture as metal furniture needs minimum looking after . 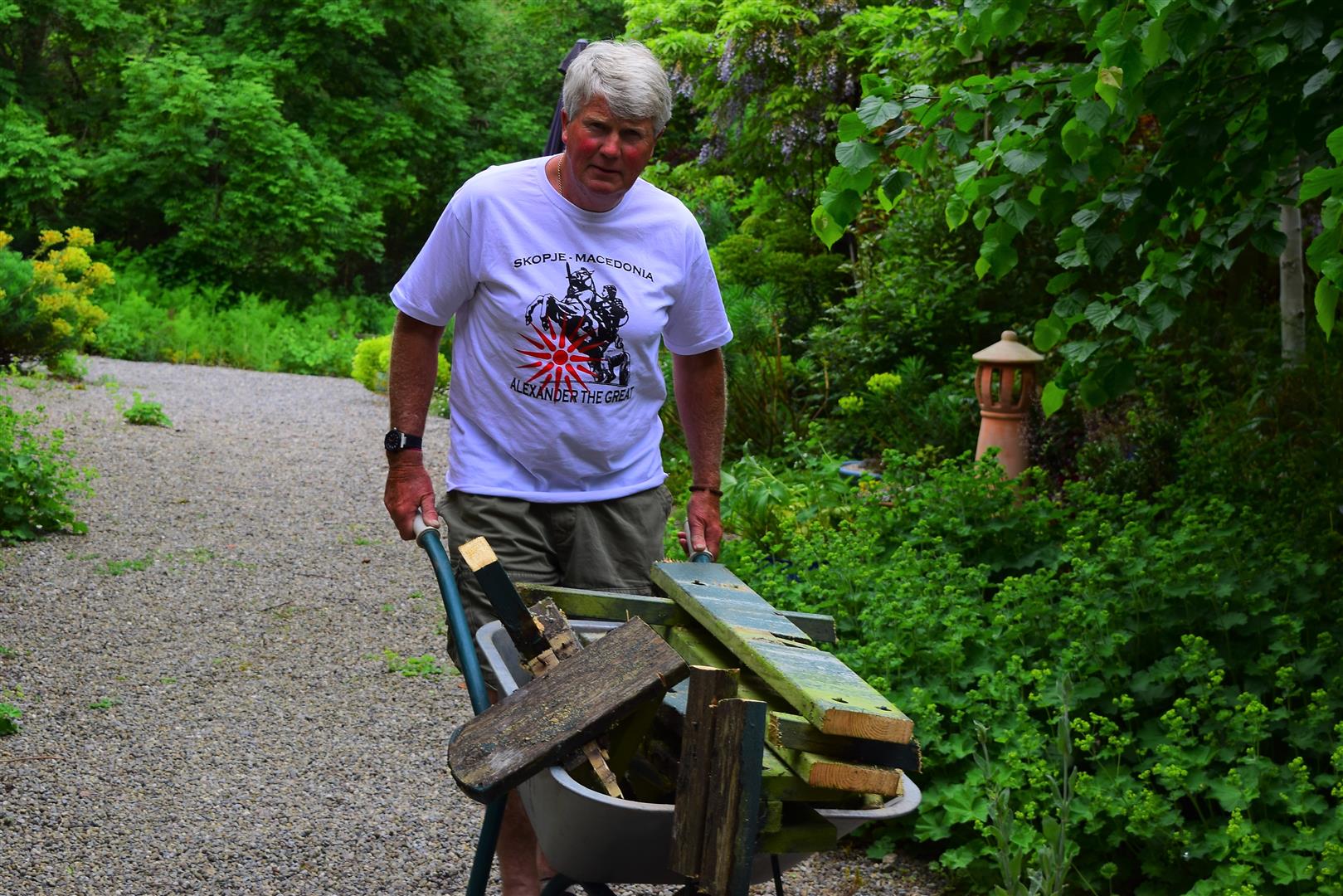 The last journey for the wooden bench destined for the stove next winter !

This new stone head has been standing in Glenconnor Garden Centre for a few years where it became part of the furniture to such a degree that they were reluctant to let it go but Snezana fell in love with it a year or so ago and finally Chris gave in and it now guards the front garden … originally I thought it was a North American Indian totem pole replica but on closer living with it I think it is more likely to be a Mexican Aztec god … either way he looks great here ! 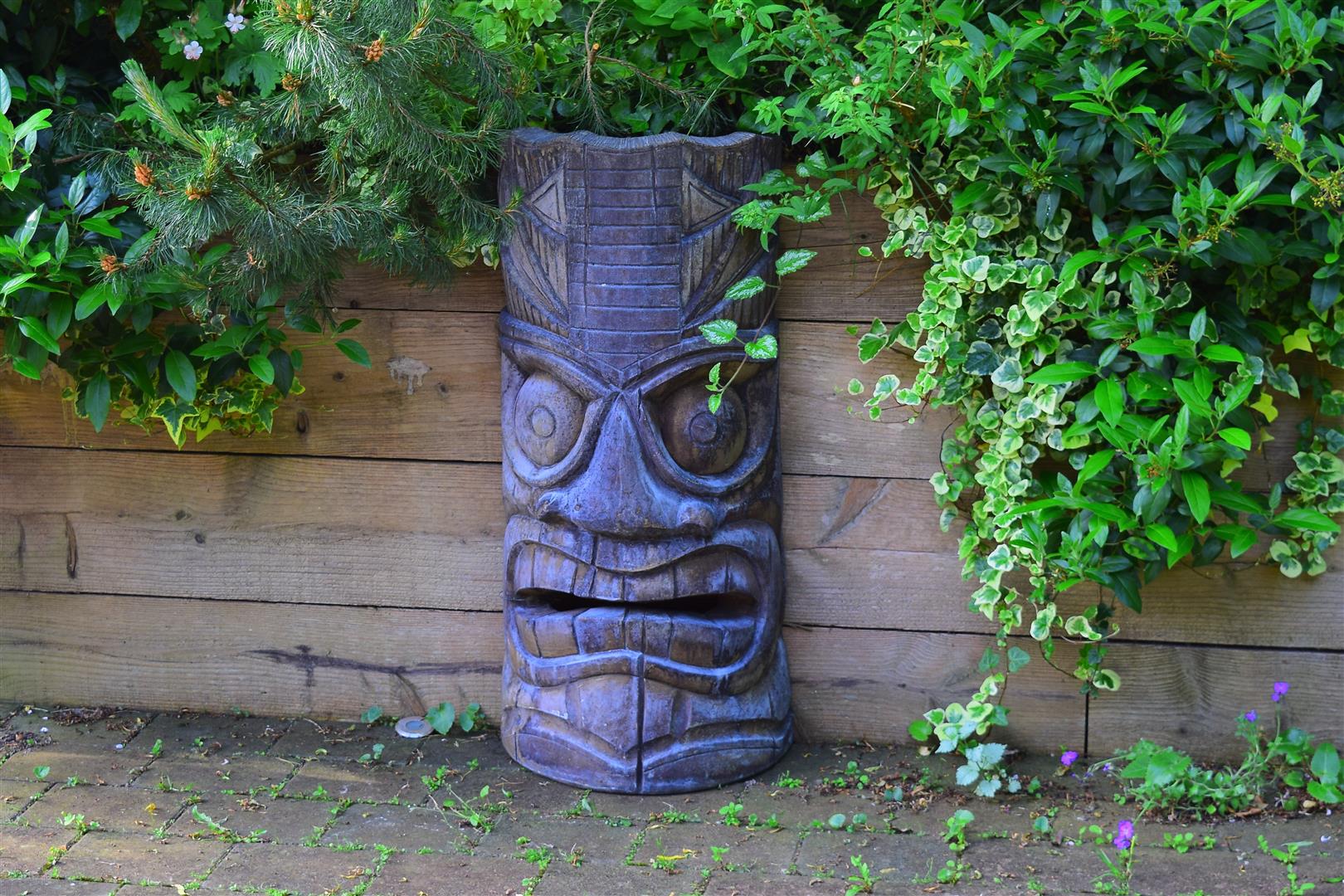 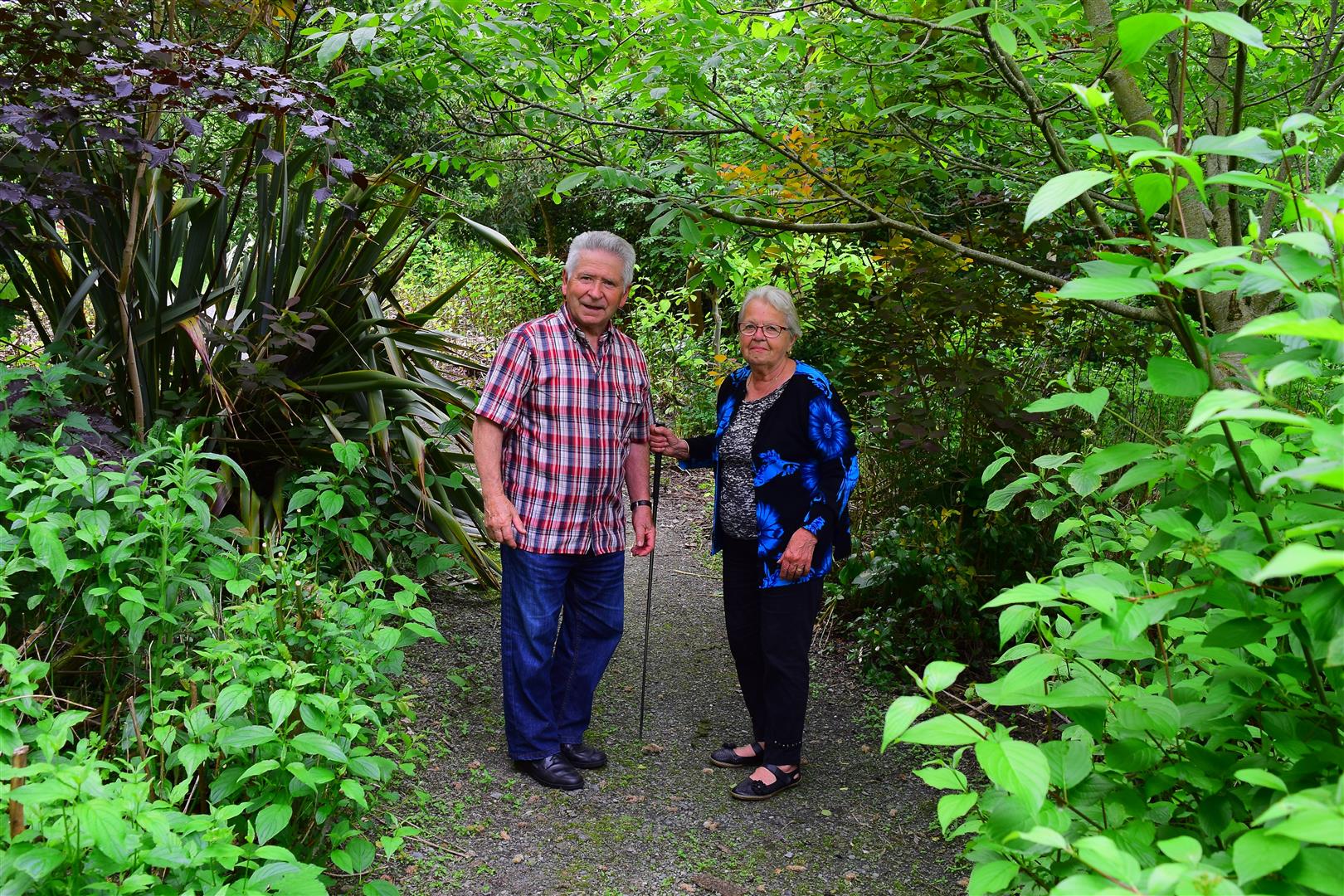 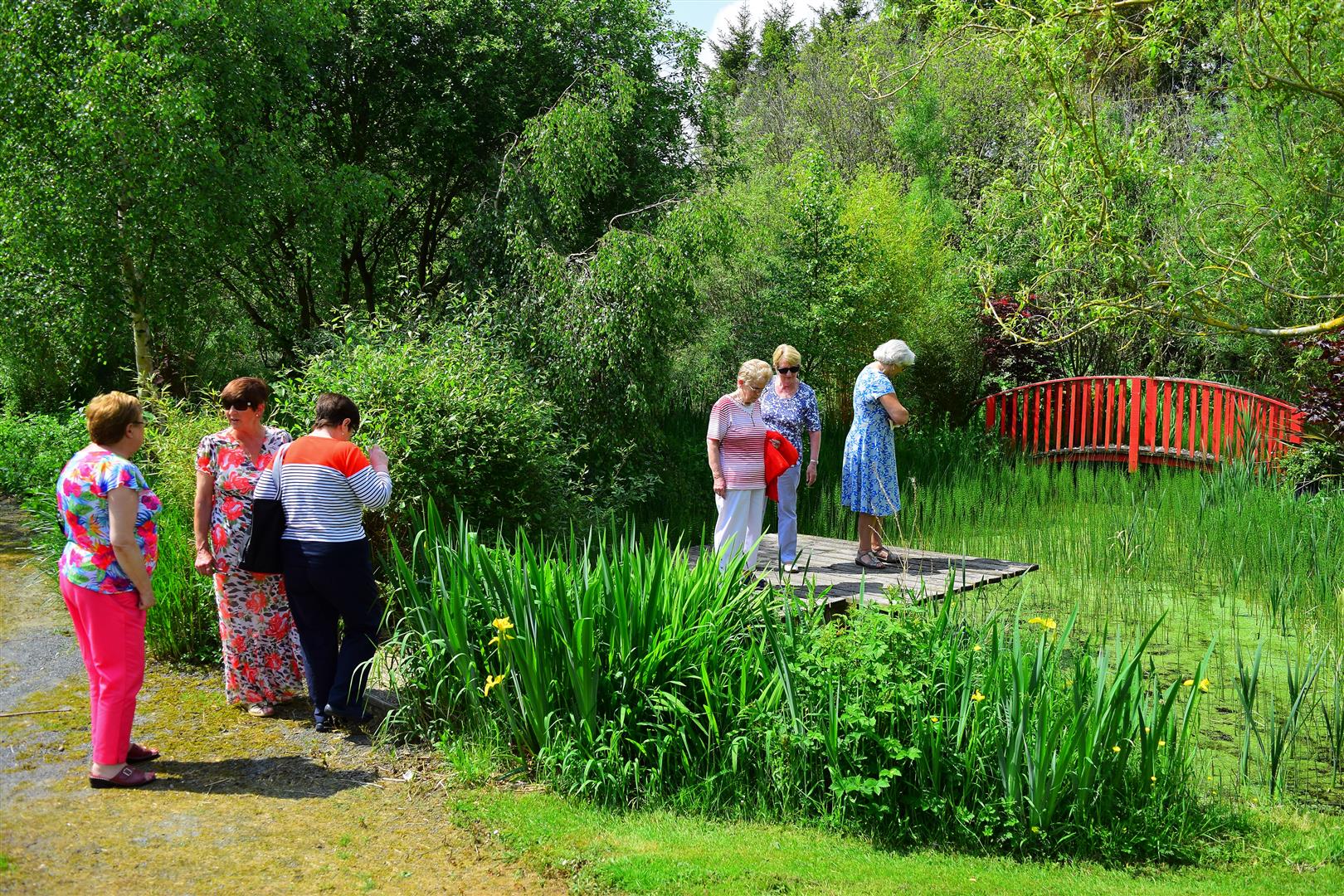 Members of the The Tipperary Active Retired Group , May 28th 2018

And finally born on the last day of May 2018 , my grandchild , Baby Ruth O’Riordan seen here with her Dad , David ! 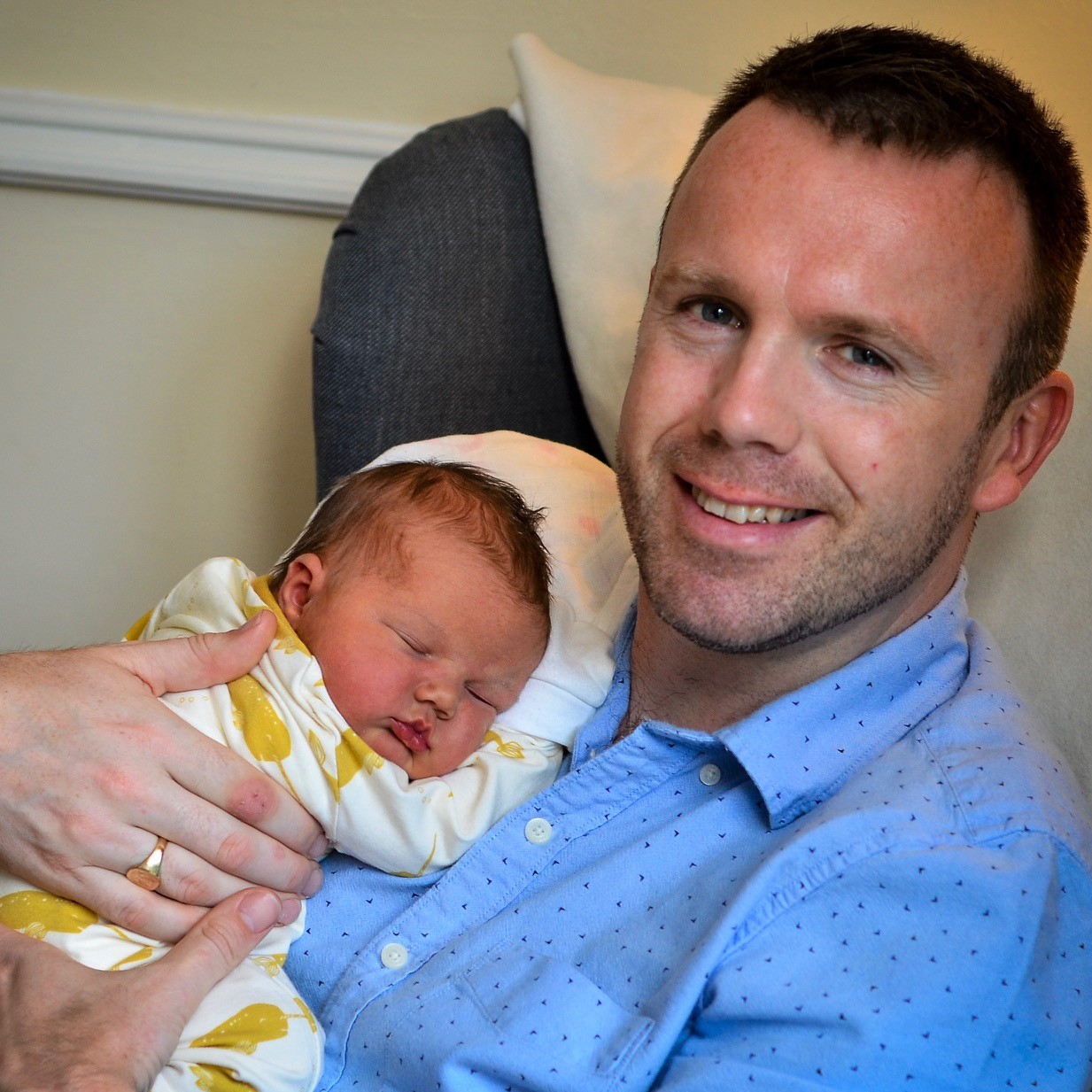