I spent a few weeks in May this year  tweaking a design for an extension to a garden on the Adriatic Coast in Croatia which I had set out last September  2015 for the builders . The garden is owned by a friend and I built it from scratch twelve years ago and have planted and monitored it on a twice yearly basis since . All the plants , trees and shrubs are Mediterranean so are selected to cope with the extremely hot dry summers , it started out as a small garden which I planted with a mimosa tree for height and the plants are jammed in to both preserve moisture and keep down weeds so santolinas fight it out with lavender and rosemary as ground cover and for structure I have aquaves , two olive trees and basically silver leaf is the dominant colour as this obsorbs the heat of June to September 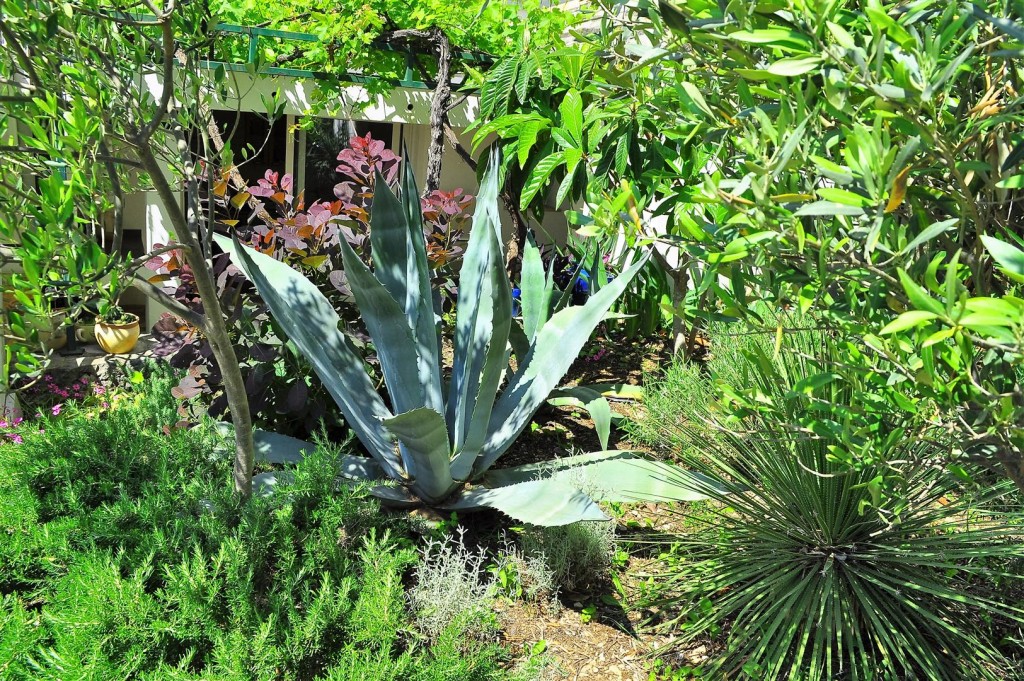 All the Adriatic coast planting is tolerant of long periods of drought and heat , May 20th 2016

Last year the owner was able to buy an adjoining piece of ground , 400 square metres  all sloping and south facing and the best bit is that the plot had six very old olive trees and a large mature fig tree … whats not to like ?! 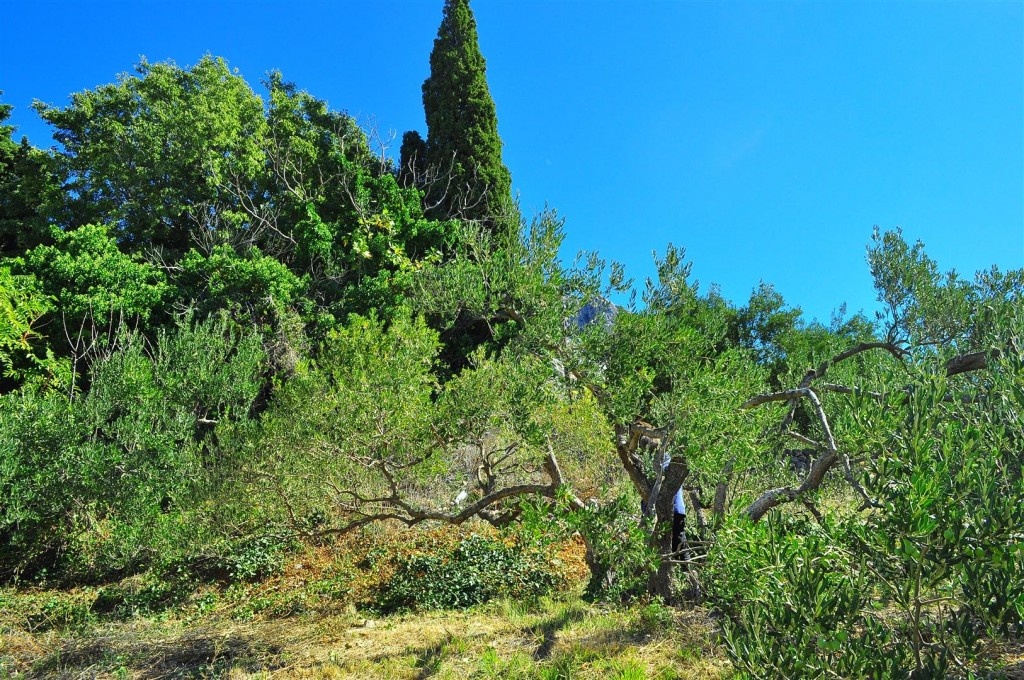 I had been looking at the site for years and designing a garden in my mind should it ever become available so a plan was rolled out in September 2015 and I walked the ground with a local friend , Zdenko Zivkusic , from Vrgorac , who is a wrought iron specialist but who more importantly knows all the local craftsmen in the middle Dalmatian area around Makarska , Tucepi and Podgora . Zdenko brought me to see some properties that had gardens landscaped by Immotski stone masons which showcased the local stone available .

Immotski is a village in the Biokovo Mountains which for generations has produced the finest stone masons in Dalmatia who can compete with even the renowned Island of  Brac stone masons who supplied and laid the white Brac marble on the White House in Washington .

The plan was simple , not to over prettyfy or dominate the natural beauty of the site … I mean what can beat a combination of mature olive tree on a hillside looking out over the Adriatic … so keep it simple stupid … no pressure then !!

The site was terraced over a hundred years ago in a very basic way common to an area where times were hard , just basic rock to hold back the earth on each terrace , no steps just an opening in the centre of each terrace and you slip slided your way up and down the site so obviously any plan had to replicate the terraces with stone pathways and steps , the terraces needed to be level so any excess soil or stones would be used as fill in and the top terrace would incorporate a paved area for leisure and outdoor eating . 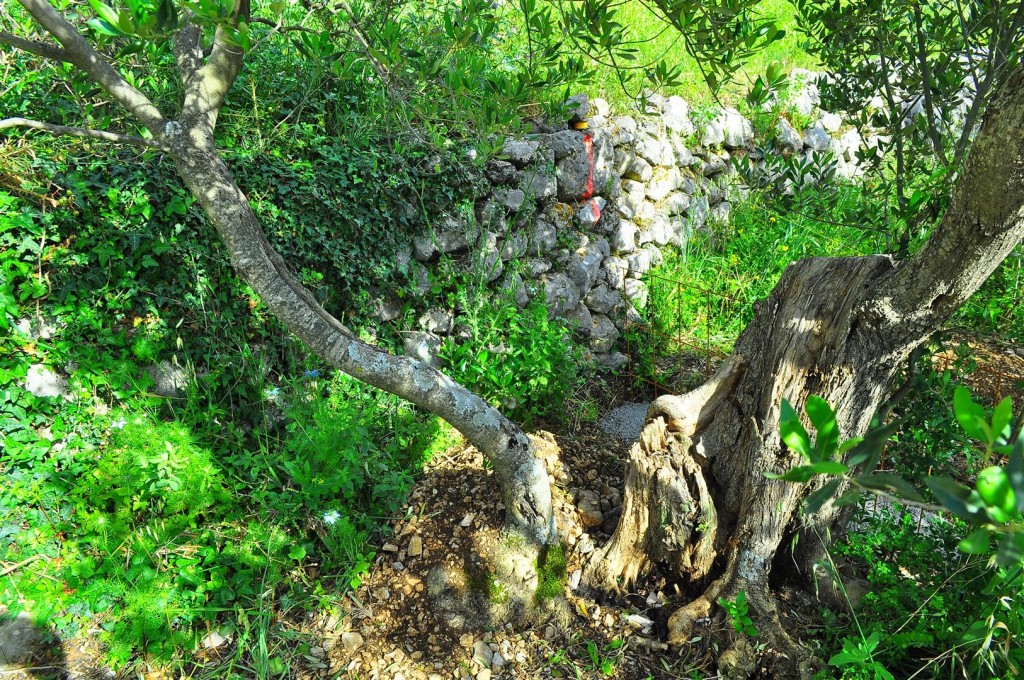 During my career with the EU I worked and lived for fourteen years in the Balkans  and knew that the trade of stone mason was highly regarded and that building the traditional stone walls was an art form particularly in the Former Yugoslavia …. and in a case of life imitating art , in Tito’s time with a touch of black humour any dissident between 1949 and 1980 whether he or she liked it or not could get a course in rock breaking courtesy of the communist State on an island called Goli Otok in Upper Dalmatia … I worked with people , usually Croats , who had fathers and in one case an aunt , picked up by the secret police at their homes in the middle of the night for a careless word of criticism of the regime , no trial of course and who subsequently spent up to fourteen years breaking rock on Goli Otok .

Anyway Goli Otok is history now but the name can still invoke a shudder among people of a certain age in today’s Croatia but our little project hopefully would excite only good memories and allowed me to borrow the opening lines of the 1960’s Bobby Fuller song  ” I fought the law ” for the title of this article !

My original plan was to reuse the stone in the terraces , restore and perhaps clean them up a bit and then to reposition them but when the masons arrived on site they decided that newly excavated rock would be better and as luck would have it a new road tunnel being constructed through the Biokovo mountains outside Makarska to link the coastal Dalmatian road to the new motorway to Zagreb/ Dubrovnik , had provided excavated  rock for the local construction industry and was available at a good price .

Work started in March and was six weeks into the job when I arrived for my first visit in early May and I was delighted both with the new stone and the quality of the build but one problem stood out , no stairs built into the terraces as the masons had decided either through a mistaken interpretation of the plan or wonky translation of my design from English to Croatian , to add on two sets of stair cases at the end of the project which I was not happy with … the view of the new garden is mainly from the side and while there is no doubt the the proposed stairs would look great from the front looking up the terraces but I felt that the side on view would break the lovely line of the new terrace wall and look like an afterthought … so back to the drawing board … I was slightly annoyed at this arbitrary change to the design but the quality of the build of the new stone terraces was so good that any annoyance was short lived . 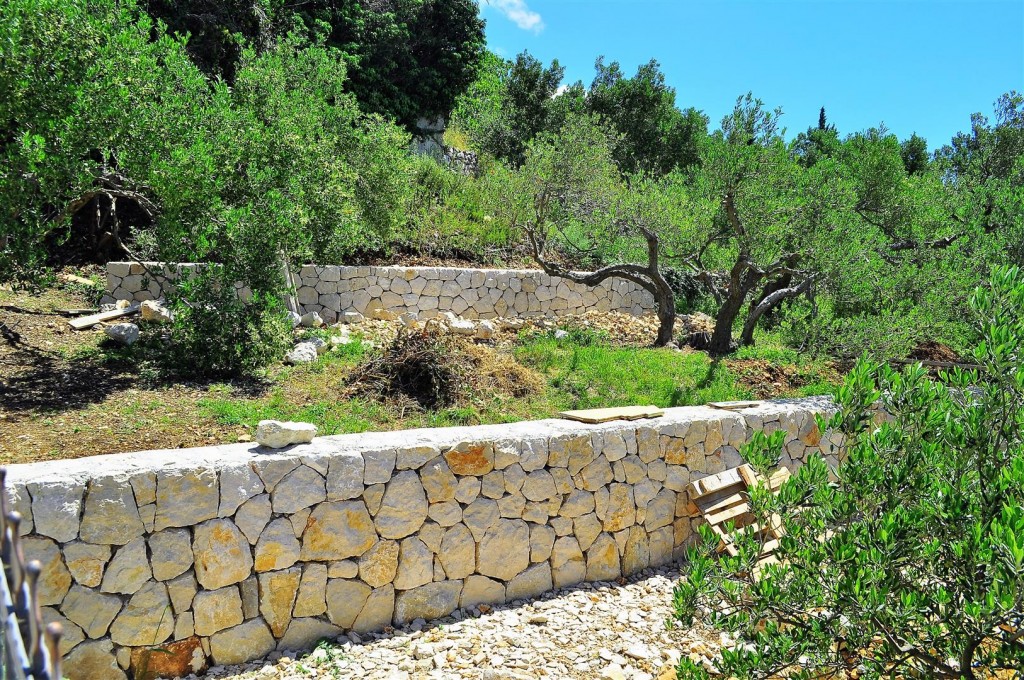 The new terraces without stair cases May 2016

I examined the terraces in great detail over the next few days to see how to best place a set of stairs  and realised that the deviation from the plan whatever the cause , lost in translation or just a misinterpretation , was actually a blessing in disguise as I could see that built in stairs have to take the space from the top of the terrace which limits the space of the terrace and I could that the new stairs could be tucked in at the far corner and would allow the entire terrace to be used .

The solution which I discussed with Zdenko was to build the new staircase at the end of the wall closest to the house and he would construct  it in green industrial steel which which would add an organic difference  and contrast to the natural stone . 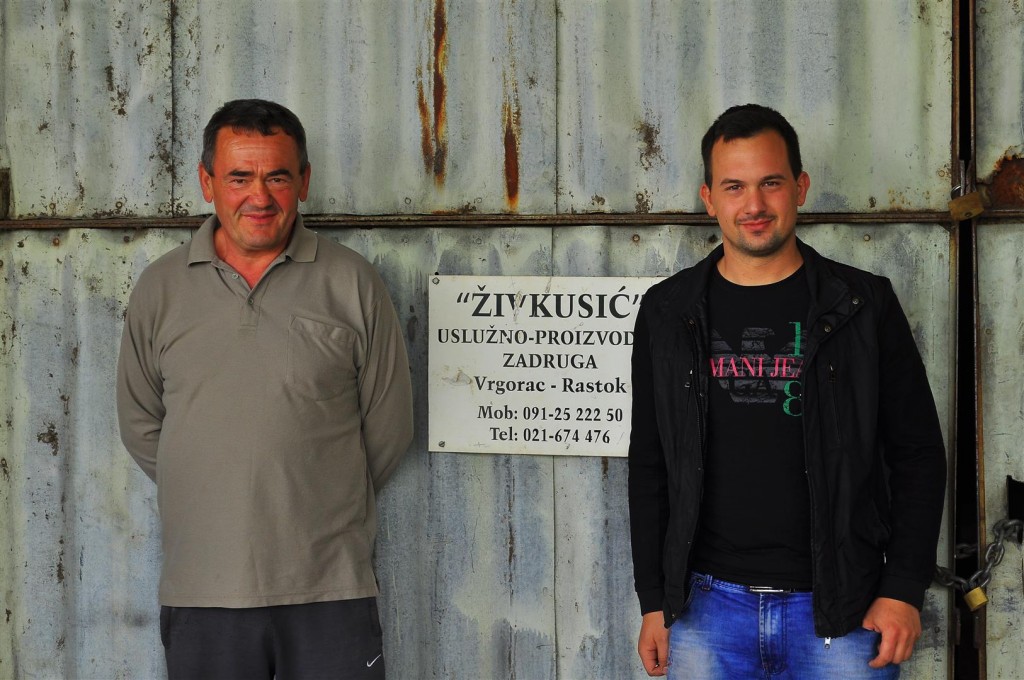 Another tweak occurred a few days later when Zdenko and the stone masons came back and said that having looked at the proposed steel staircase on the side of the terrace that in their opinion natural stone would fit in better in the same location and be a better blend … I had been mulling the steel idea over anyway and was 50/ 50 on the idea but I always believe that local craftsmen in Dalmatia know the customs and traditions better than any foreigner can ever achieve so natural stone it was ! 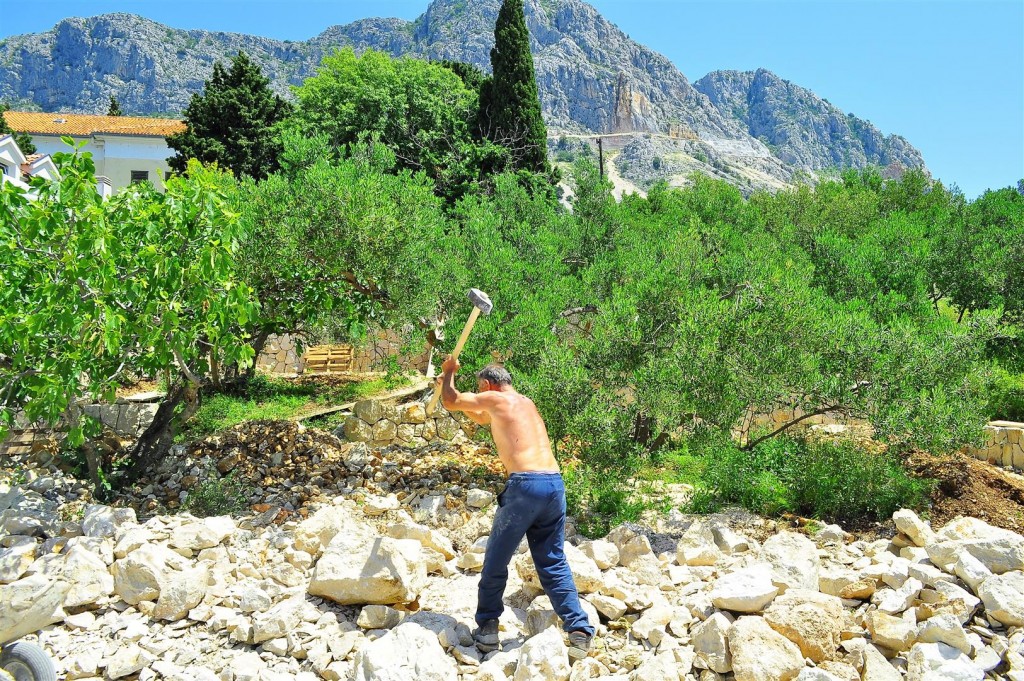 The work was painstakingly slow and during my three weeks I got to see first hand just how meticulous these guys were as every stone was broken down from large boulders and then chopped into size and further refined with a small hammer and it was not unusual to see the mason take a stone out of the wall three or four times , chip a bit off until he was totally happy with the fit … and this would happen with EVERY stone ! Traditionally the stone work is paid for by the square metre so if they took all day to progress a half metre in height well that was their cost and they were also particular about the quality of the stone … to me a stone is a stone but I saw them return two lorry loads of stone that they were  not happy with and by return I mean a truck with a special lifting apparatus had to travel over ten miles and then lift the stone off the road side and replace it later with new stone . 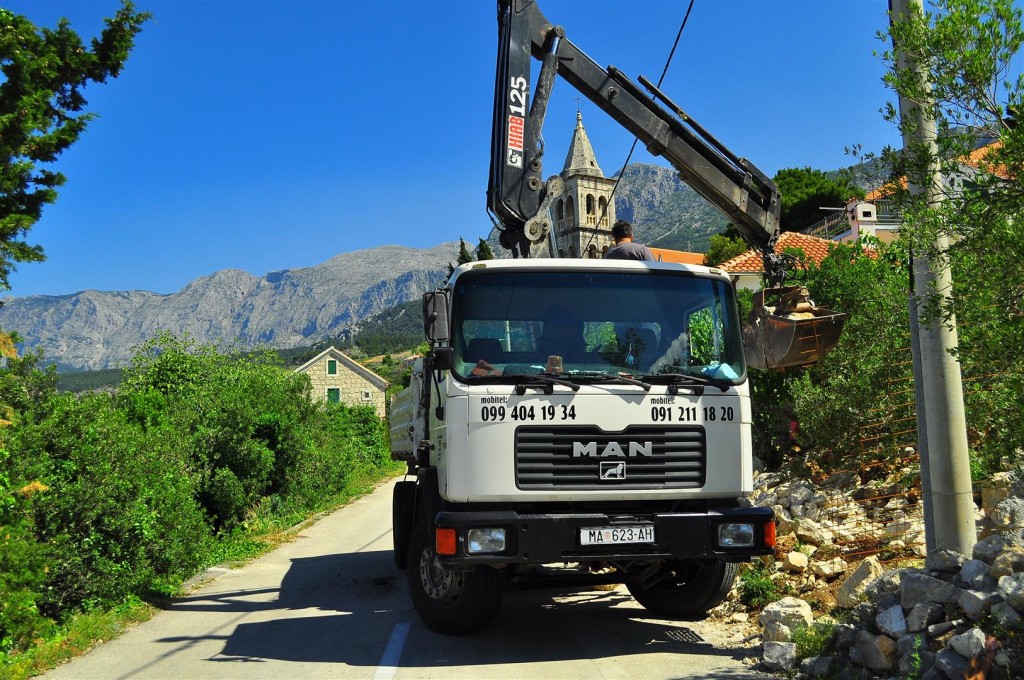 Each day the team of three would arrive at 7. 30 am , two would carry the stone and cement to the mason who would be solely responsible for cutting and placing it , a  very strict hierarchy operated and the mason would personally break up all the boulders with a sledge hammer and then cut out the individual stone blocks . 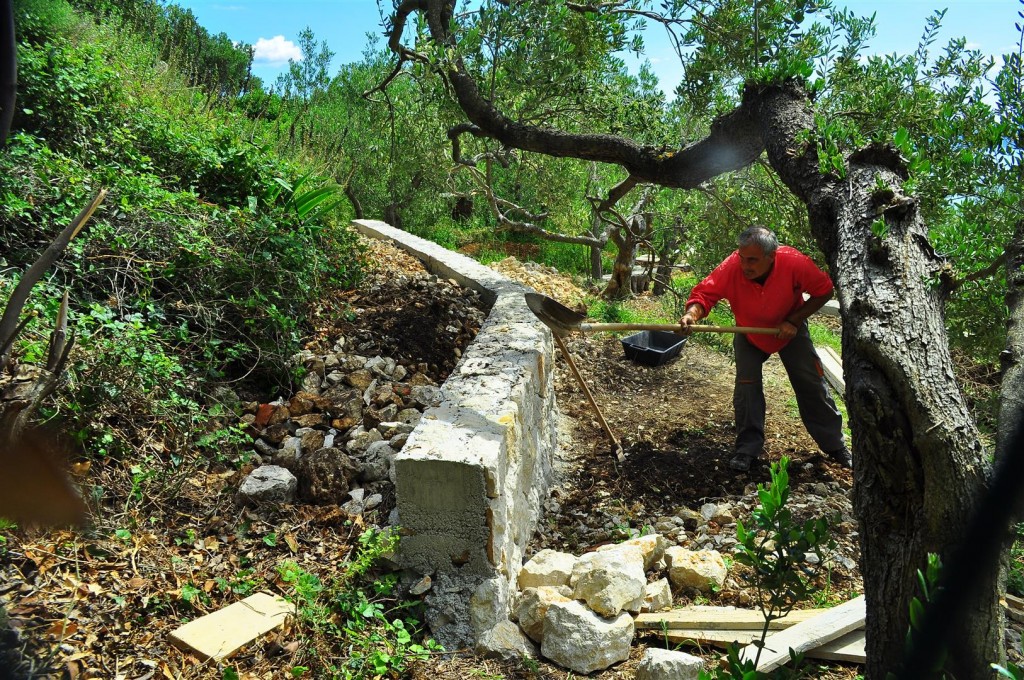 Preparing to level the top terrace May 22nd 2016 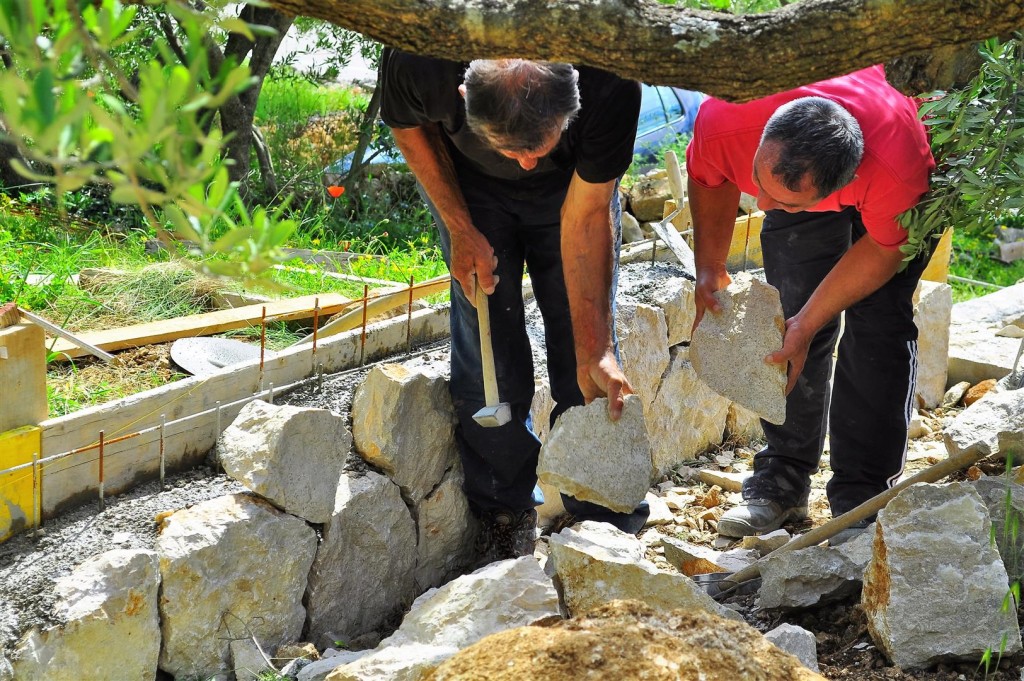 Each stone was individually dressed and positioned , May 18th 2016

None of the three were comfortable discussing the work with me in any detail , their Cefe or boss would set out each days work for them and any discussion would have to be with him and again a very strict chain of command in operation …. but a fierce pride in their work and tradition and they would always tell me whatever is decided you can be assured it will be built in the best possible way . 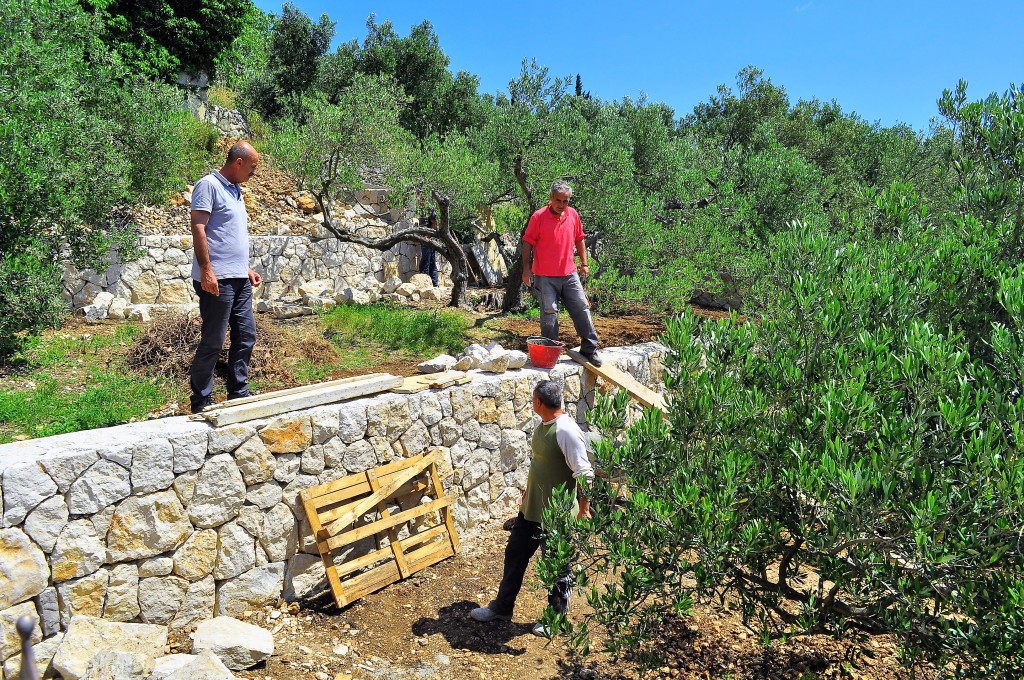 Stone masons have been building stone walls in the traditional manner in Dalmatia for the past thousand years and not a lot has changed in that time as apart from now transporting the stone by lorries to the site instead of with donkeys , everything is still cut by hand and not once in the three weeks did I see a mechanical drill or indeed anything electrical being used on the stone . 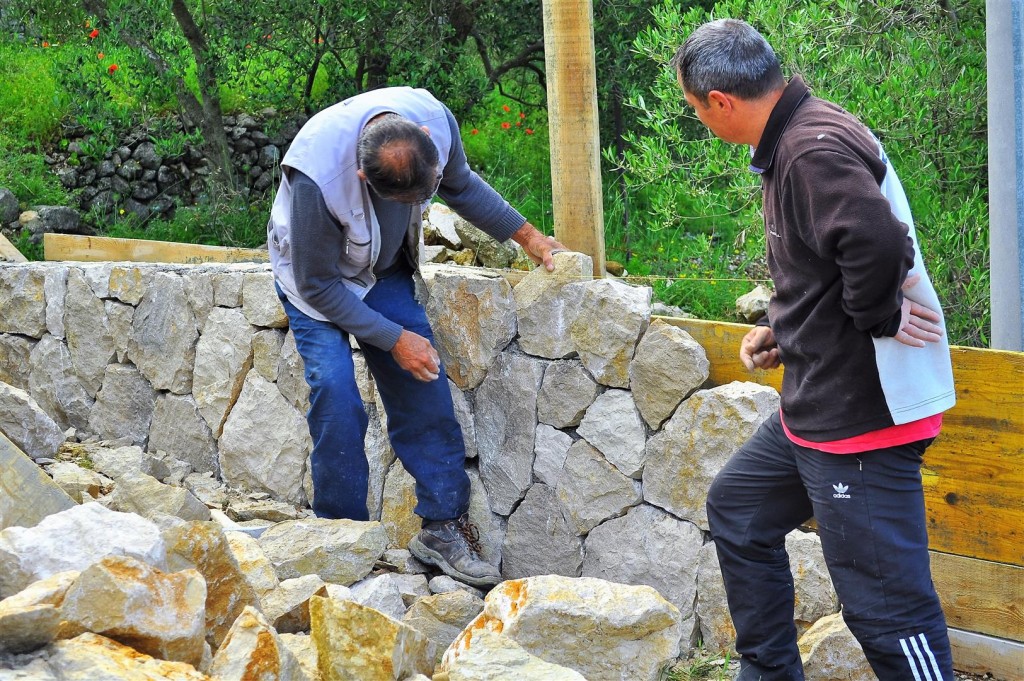 I am always conscious of being the foreigner while working abroad and coming across as a ” glupus stranac ” ( idiot foreigner ) who makes no effort to assimilate into the local culture and I have seen too many such examples in my time of houses on the Adriatic whose design is more appropriate to England or Germany and the same goes for gardens .

It was a pleasure to sit across from the Meister as the Mason is called and watch the detail and care shown to every stone . 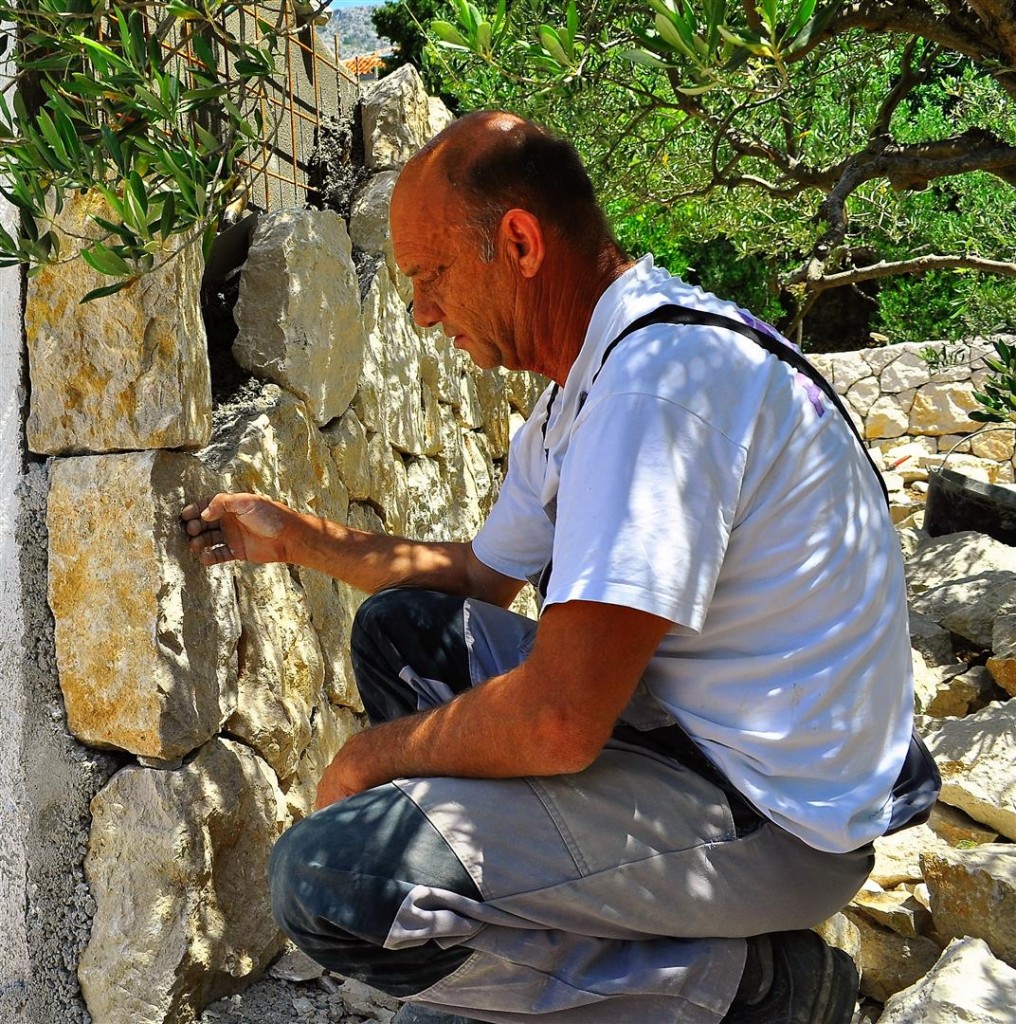 The attention to detail by these Immotski artisans was amazing , May 28th 2016

I also consulted with local croatian friends to ensure that the design was along traditional lines and Sanja Srjic , a local artist from Makarska  who is also a gifted stone cutter with her husband Mate and the original architect of the house fourteen years ago , Alberto ,  all visited and walked the site with me . 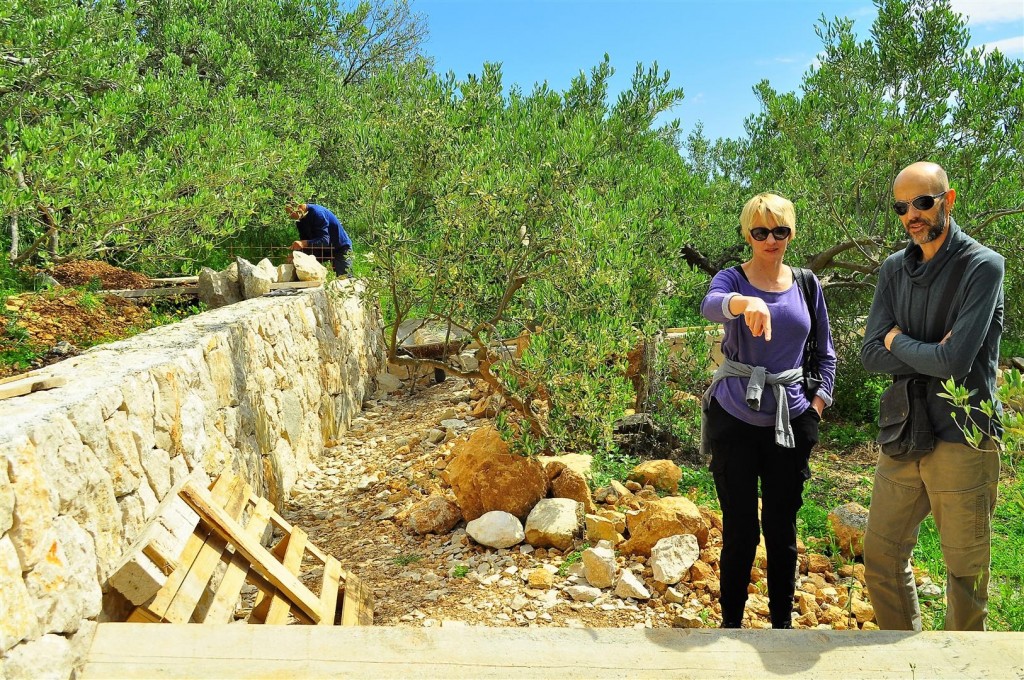 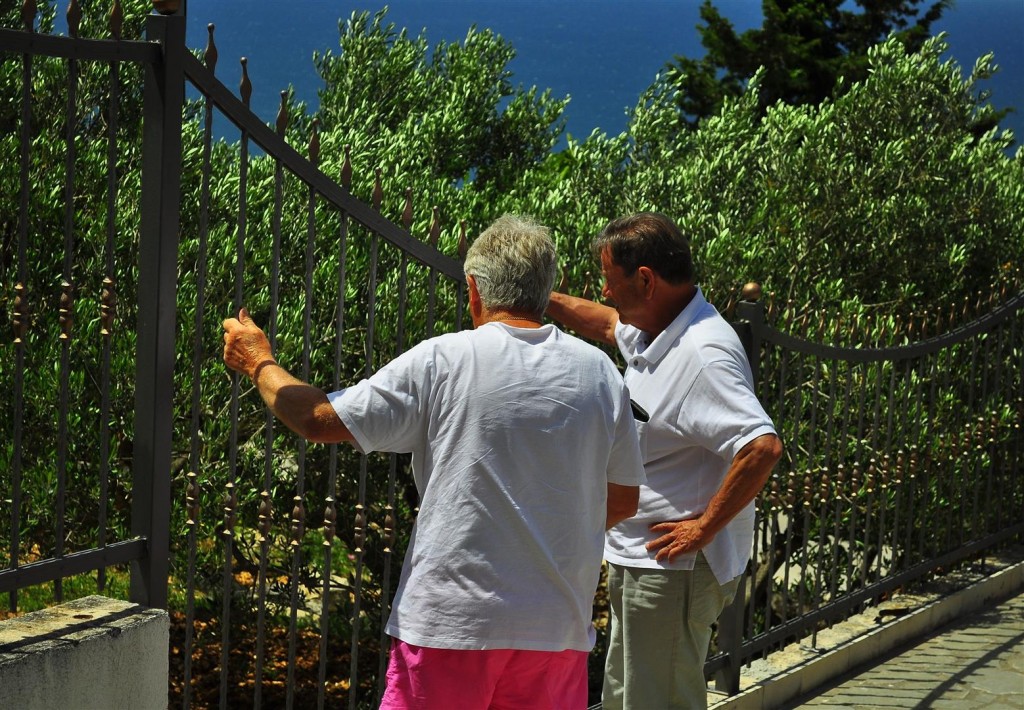 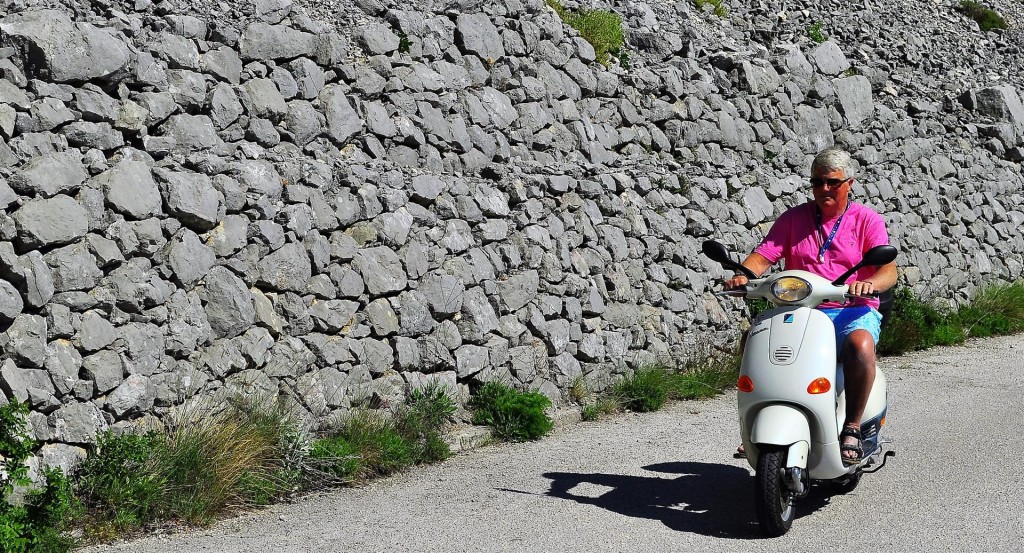 A stone educational visit to Biokovo Mountain , May 18th 2016

A little kitten was born among the olive trees during my visit and seems to approve of the work ! 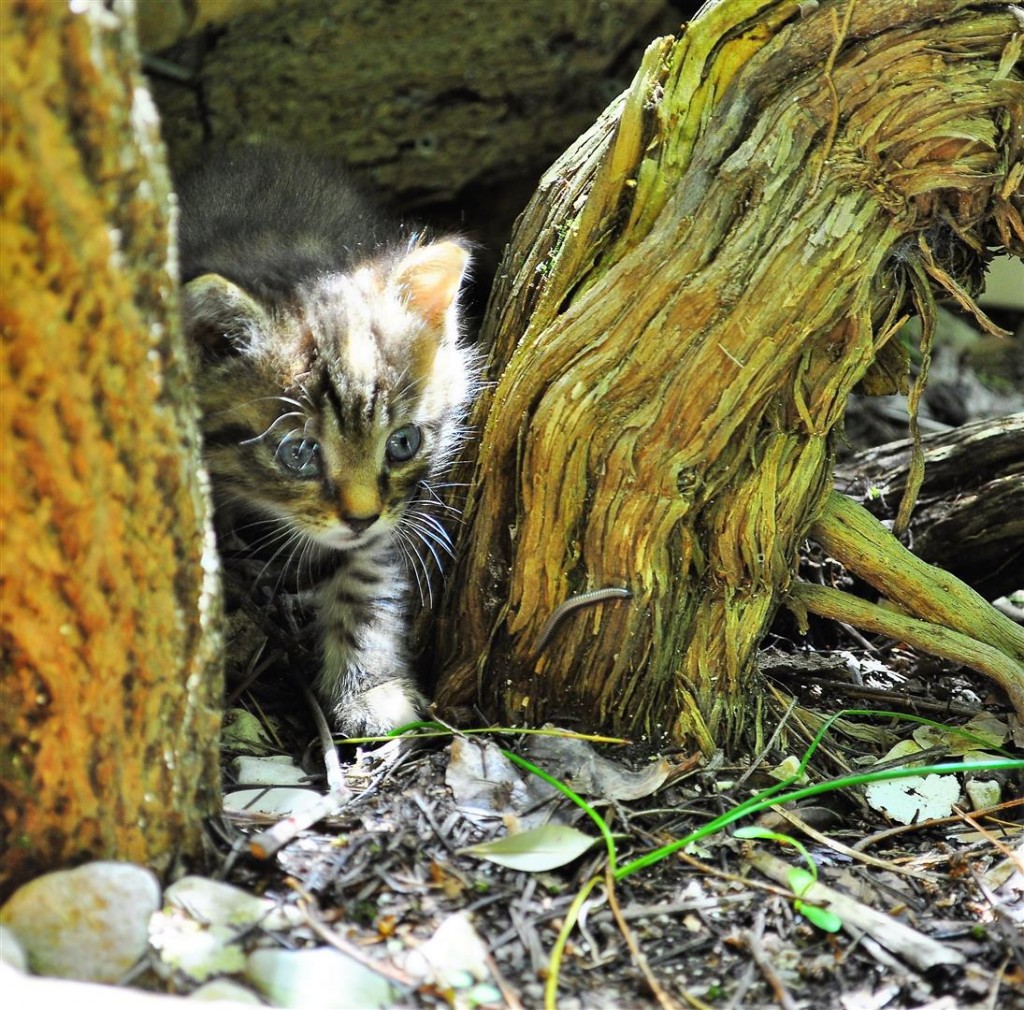 The scenery around the site is stunning and I was always conscious the new design should not interfere with the views and should lead gently into it . 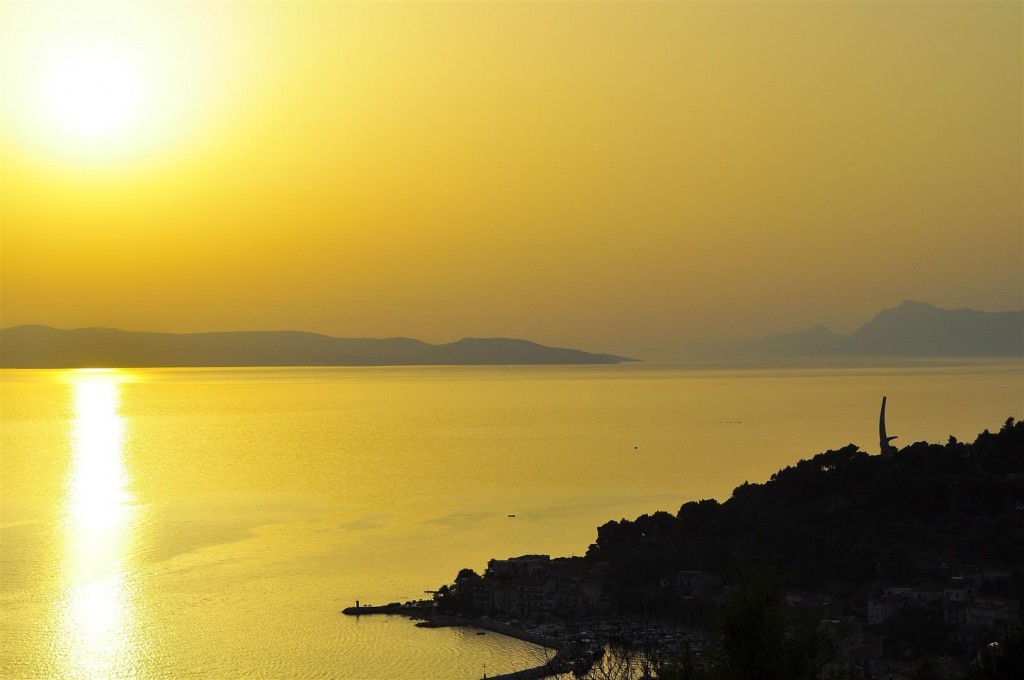 Podgora on the Dalmatian coast of Croatia , from the olive garden May 2016

The view across the Adriatic from the balcony  to the Islands of Hvar  and Brac, May 2016 . 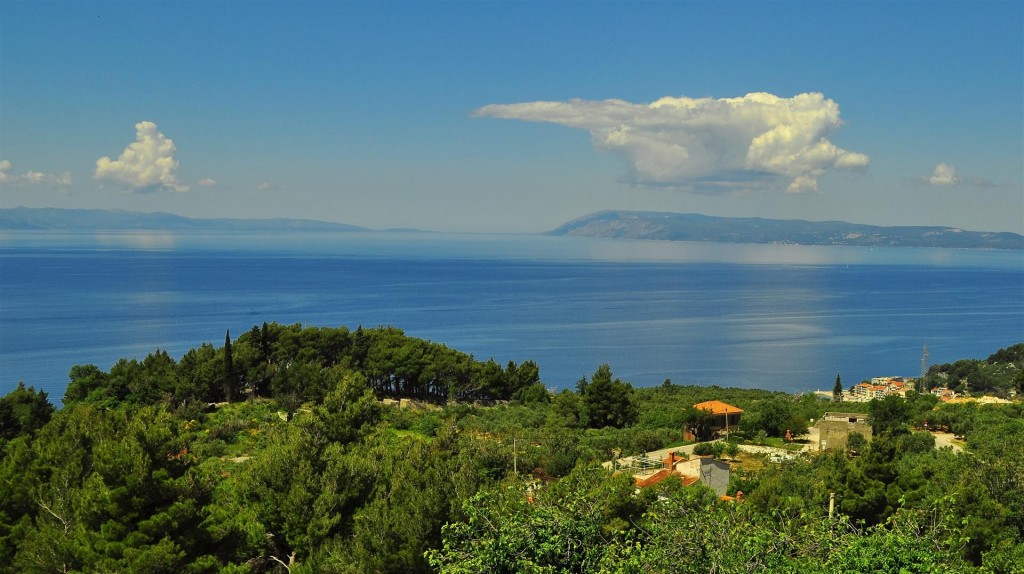 Island Hvar and Brac from the balcony , May 2016

The work continues  since I returned to Ireland and as I write I am told by Zdenko that the new stone stair case has been fitted and looks ” phenomenal ” , the masons have now started on the front wall and all should be finished for my next visit in July … so watch this space for the next installment ! 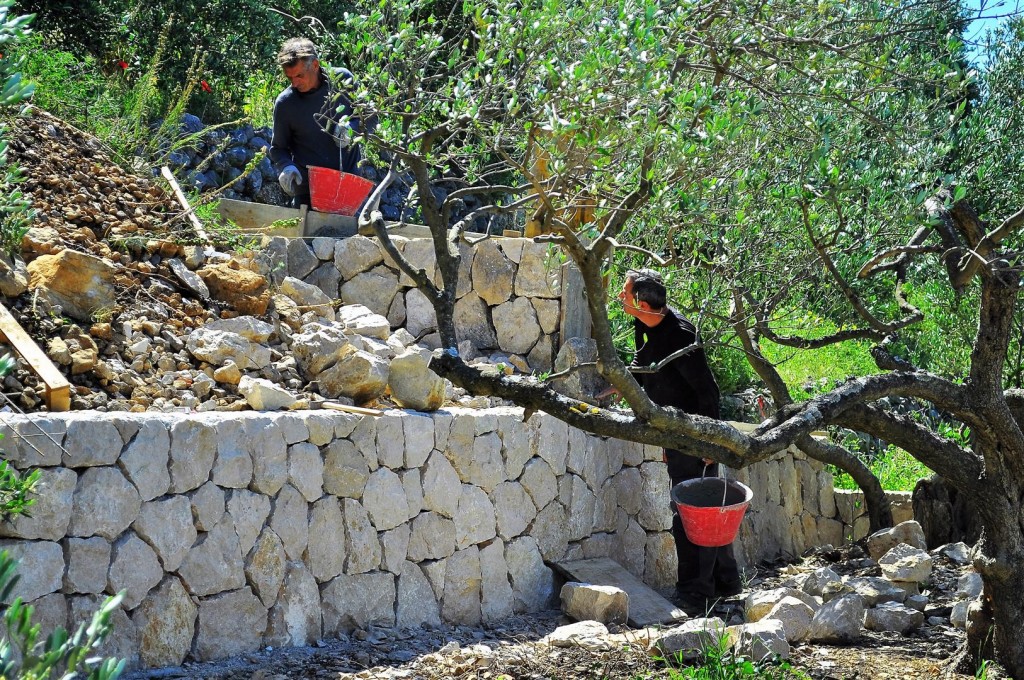 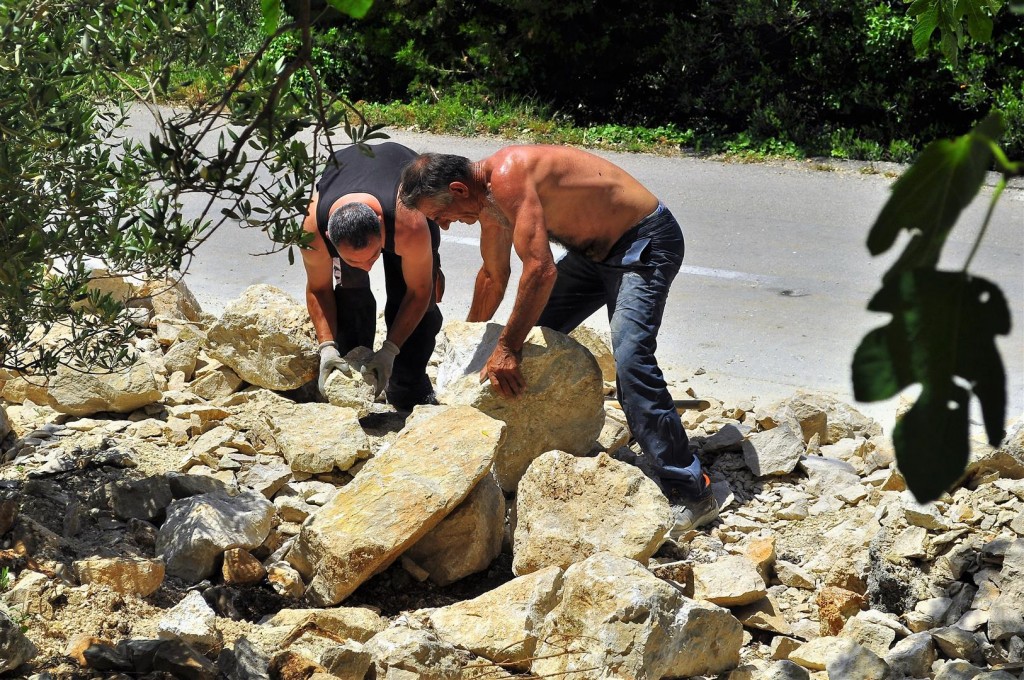 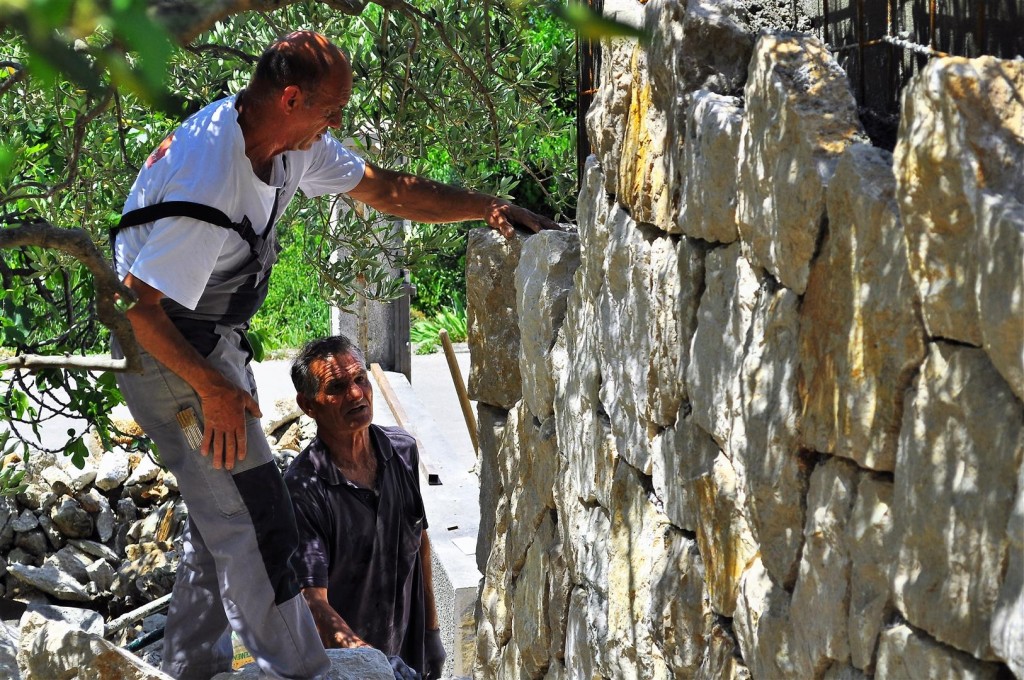 The attention to detail by these Immotski stone masons is amazing ! May 28th 2016 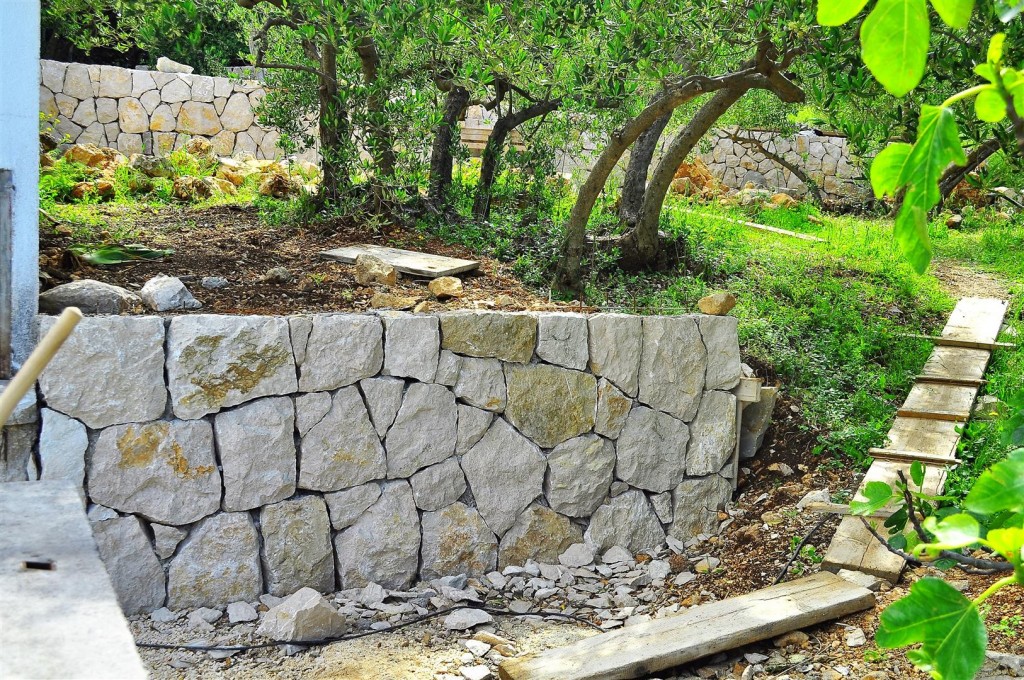 The new path starts here and follows the board walk , May 13th 2016