This coming weekend , on Sunday July 23rd , we are hosting the annual Clonmel Lion’s Club Garden Charity Day where all proceeds go to fund some of the worthwhile projects selected by the Lion’s Club committee . 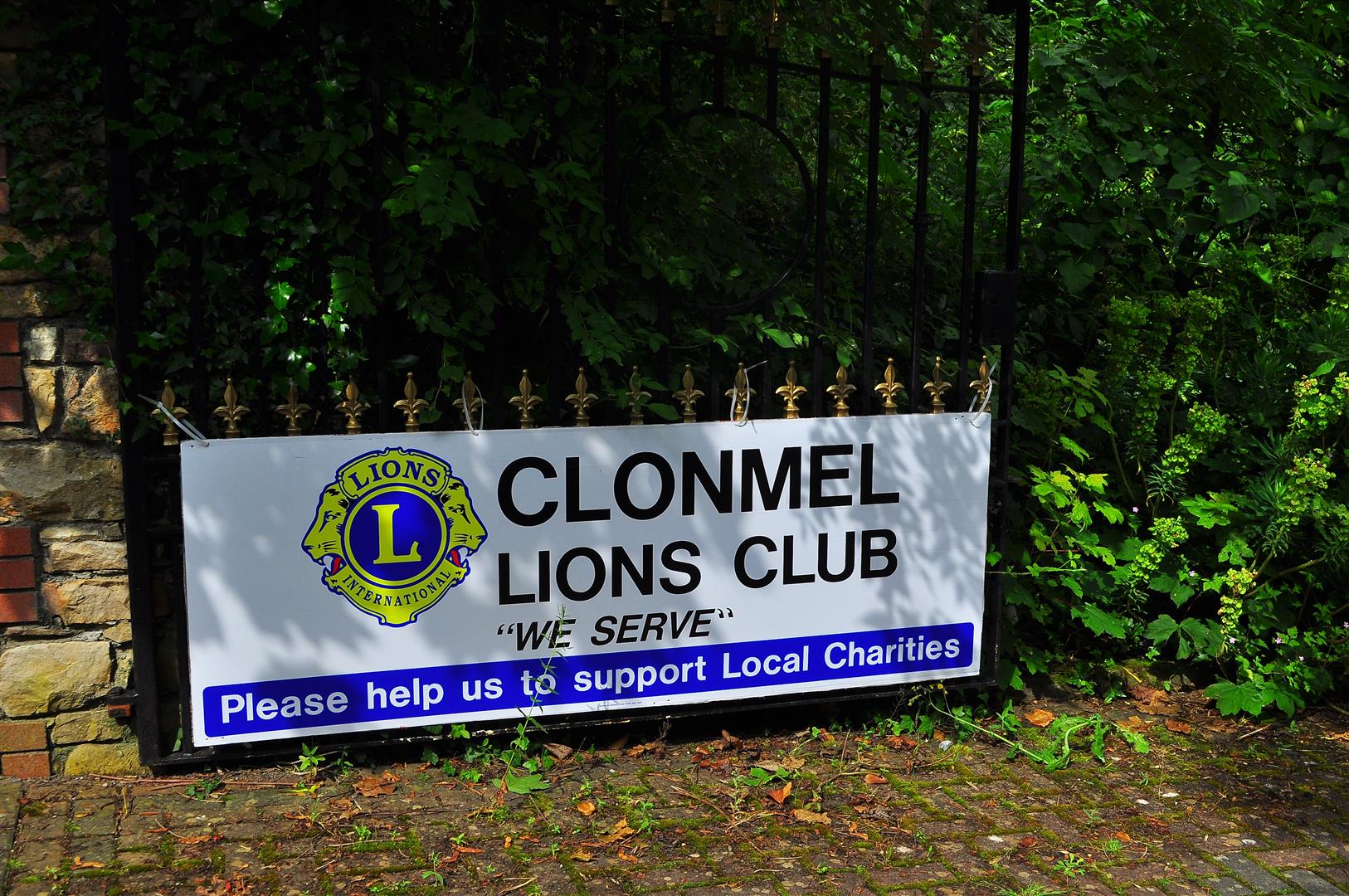 This year there will be a marquee with live music , teas / coffee and cakes all made by committee members on sale , Shirley Lannigan will be discussing her new book , The Open Gardens of Ireland , at 4 pm  and detailing the immense five years research that went into the project , there will be various activities for children throughout the day and Snezana and I will be giving a guided tour of the garden at 2 pm.

It is a great cause , 5 Euros entry and children are free .

The Lions Club committee do all the preparation each year for the Garden Opening , man the gates , publicise the event , bake cakes , make cups of tea and all I have to do is have the garden ship shape on the day  and it is a charity I admire as every penny goes to the needy and the members take absolutely nothing for administration or personal expenses … I worked in the Balkans for fifteen years and I can tell you from experience this is not the way most charities work where most of these NGO’s take almost 70 % for administration and expenses and by the time what money is left filters down to the recipients a lot more fingers have had their share so hats off to the Clonmel Lions Club  and we look forward to your support on the day !

Now that Snezana is back full time in the garden … from front line duties in Eastern Ukraine to front garden duties at Old Spa Road  I am being asked if it isen’t great to have an extra pair of hands … of course it is but unfortunately that pair of hands only does the type of work she likes and NOT anything I might like to be done and as I keep explaining there is a body of maintenance work that needs to be done , practical stuff like cutting grass  , weeding and more weeding both of paths and around shrubs and trees , cutting back , watering and these are the everyday jobs a large eight acre garden like this demands to continue even half right but Snezana maintains she gets all the “shit ” jobs so she prefers to do her own thing … basically she does not like the job of assistant gardener so has declared her own republic  ! 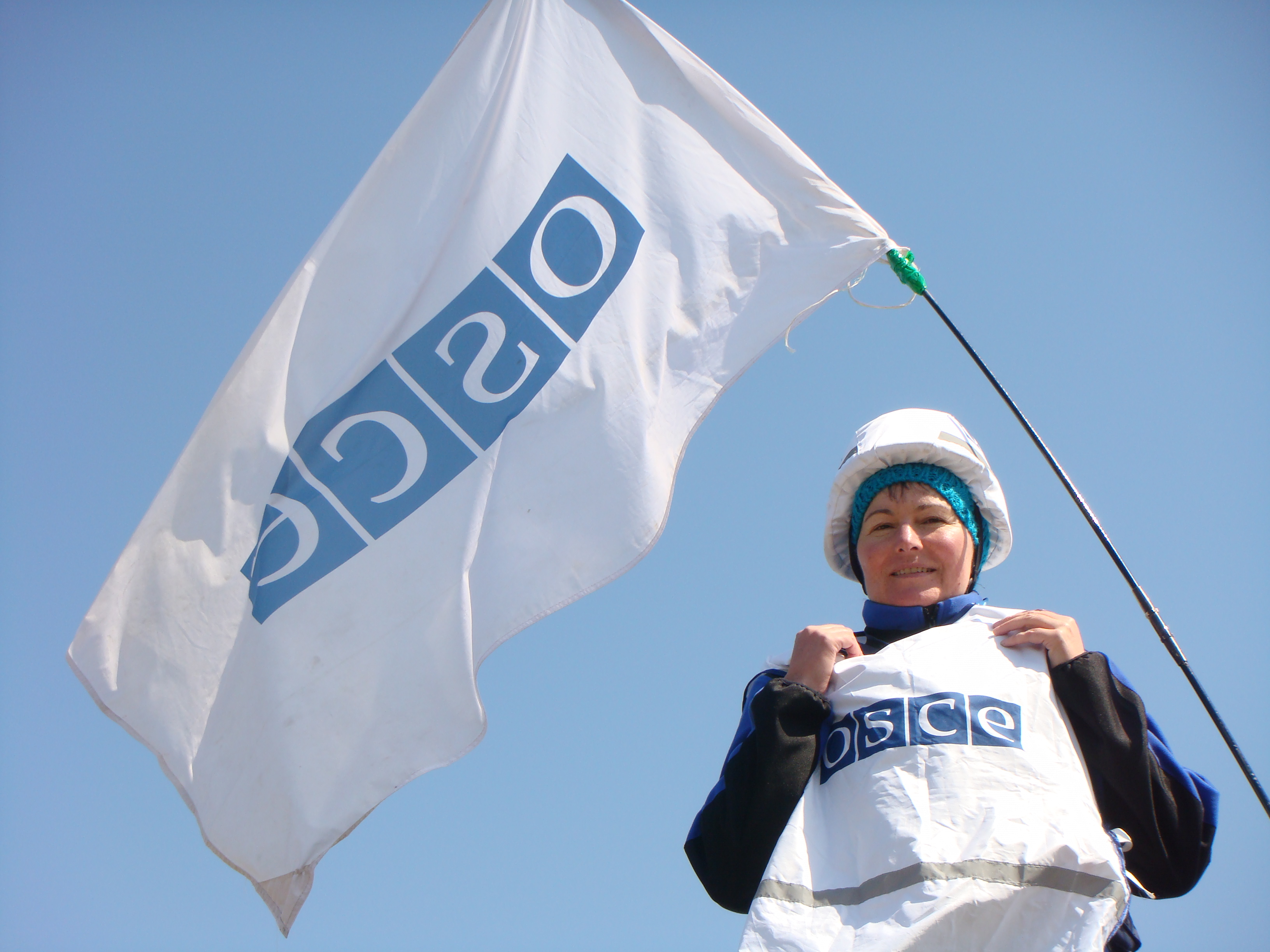 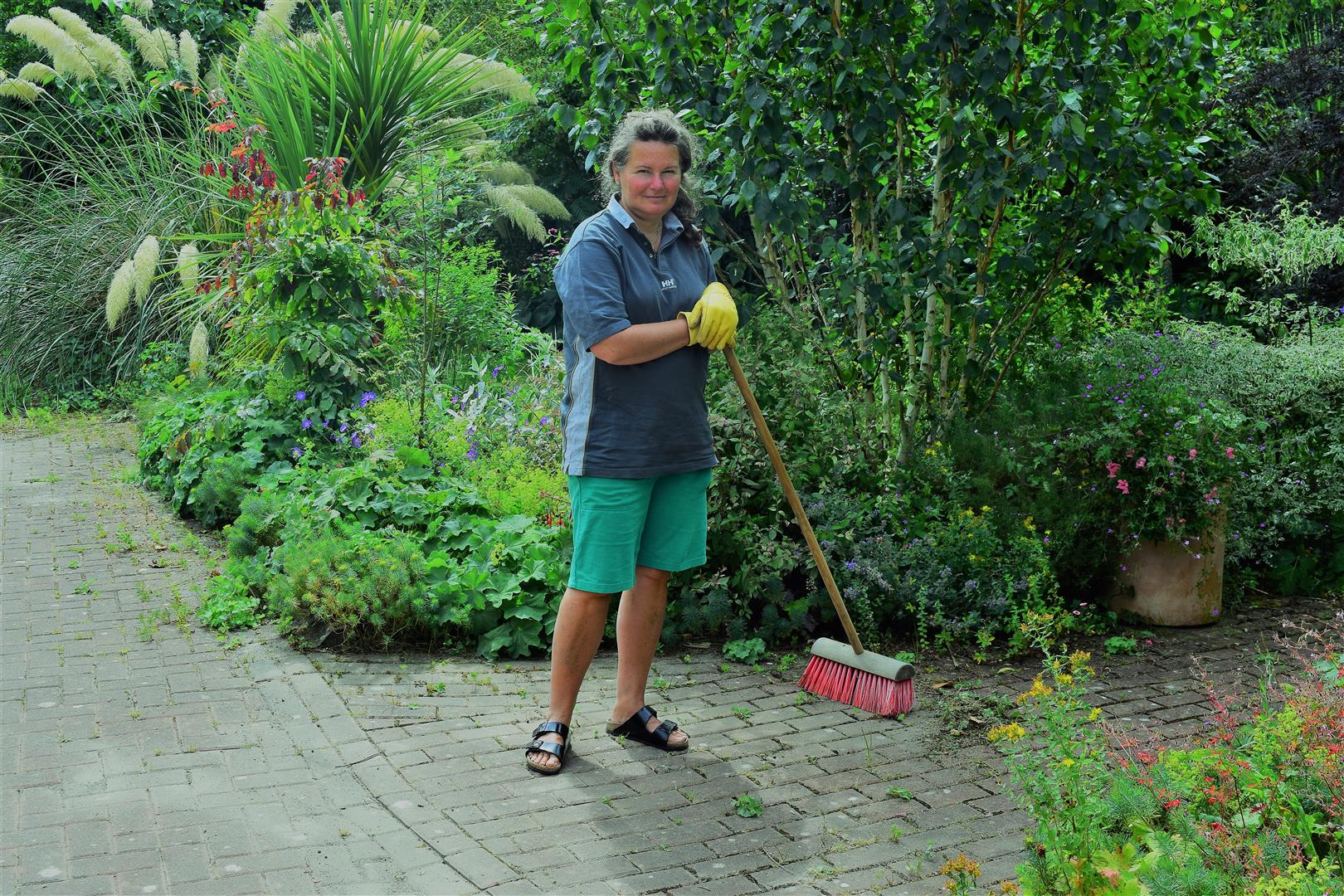 July is the month that hydrangeas come into their own and it is a familiar plant for Irish gardeners , when I was growing up it was the one shrub every cottage no matter how small grew in the front almost as a badge of honour and my Mam who had a real country woman’s attitude to gardening as in if we can’t eat it then why bother growing it but she had a hydrangea growing in the corner of a north facing plot which is still there today almost three metres high and that plant has survived sixty years of neglect and thrives !

Myself , I don’t have a love affair with hydrangeas  never having had any great success with them and even though I do all the right things growing wise , shade , not too dry , mulching regularly with grass clippings etc. mine are mainly miserable looking specimens BUT I have managed with two hydrangeas which ironically are not in the best places but these two thrive just as if to keep me interested in the breed … one a paniculate , Annabelle , which I threw into the back of a woodland area where it towers over everything and the other which I grow because I like the black stems , has beautiful blue florets . 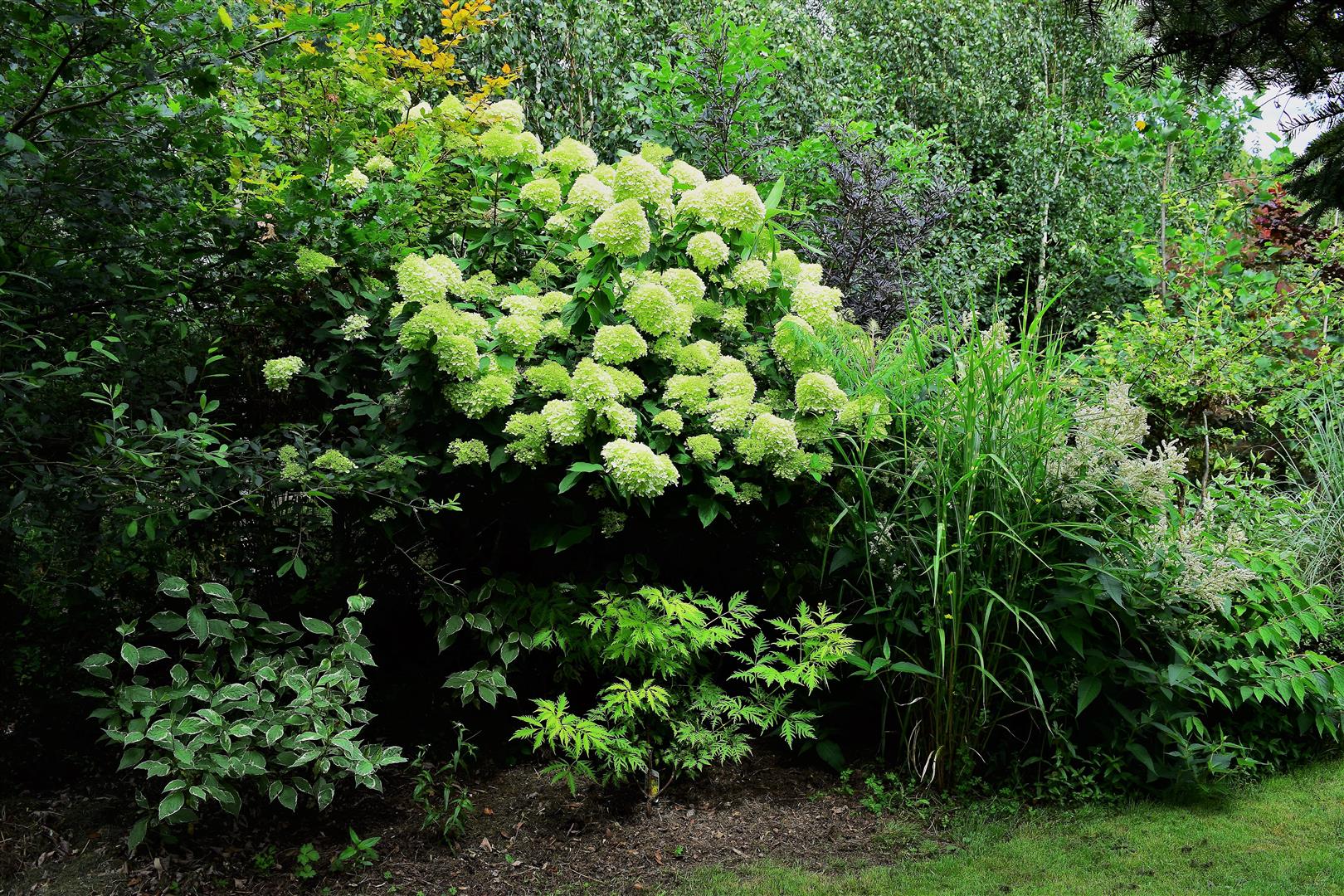 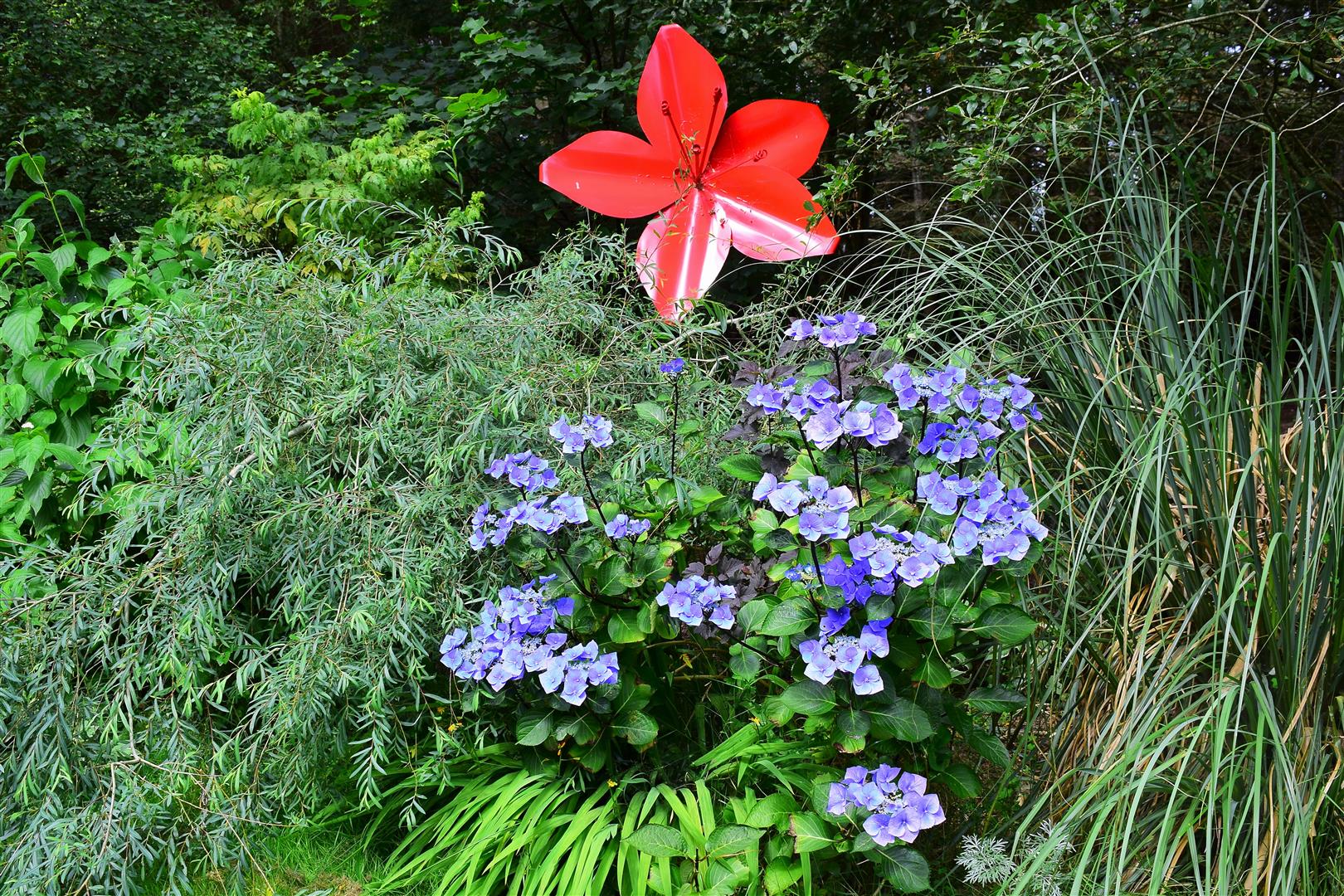 Garden centres in my view are to blame for people falling out of love with hydrangeas as in my Mam’s time everyone grew hydrangeas from slips , weren’t fussed over flower colour and shrub growth and flower production took a few years to mature and nobody was in a hurry back then  but now the garden centres need sell a million different colours for an impatient public and the pot grown shrubs need to be in full mop head flower from early April to sell … but the plants are forced too early and once planted out take over two years to flower again and to recover from the early trauma to be saleable . The buying public only want perfect plants full of flowers and are then fed up when the plant refuses to budge and goes into sulk mode the next season after initial planting  so any hydrangeas I buy are in their second year on sale having over wintered in the garden centre and are now on the bargain sale bench .

A job I have been postponing for ages and which I tackled half heartedly in April finally could not be put on the long finger any longer so yesterday it was into the ponds to clear out the bull rushes , typhia, to give them their latin name , lovely to look at and we all love them on the margins of pools in nice manageable lines or clumps but ours here have romped and thrived in the natural mud of the water gardens which were dug out of pure earth with no rubber liners as a running mountain stream feeds into them with the result that they pop up everwhere and need to be thinned out regularly or pretty soon there is a forest of bull rushes . This was the reed of biblical times in Egypt that carried Moses down the Nile and seeing how the water hens make intricate nests out of them I can well believe they could easily accommodate a baby Moses in his trip down the river ! 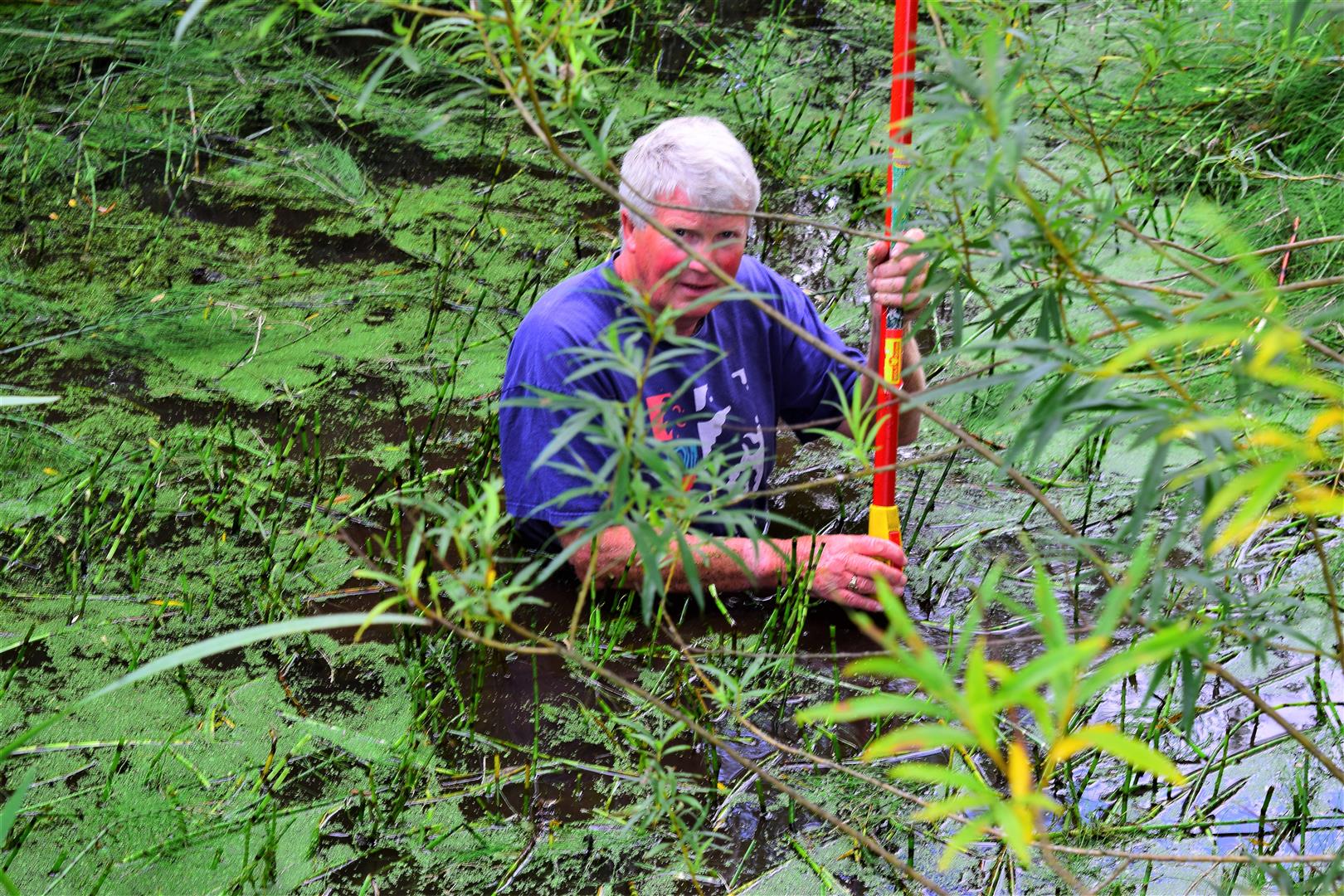 We are in the middle of an unusual burst of warm weather for Ireland so it made the job more pleasant and in one deep section of the water garden I was able to get a swim in ! 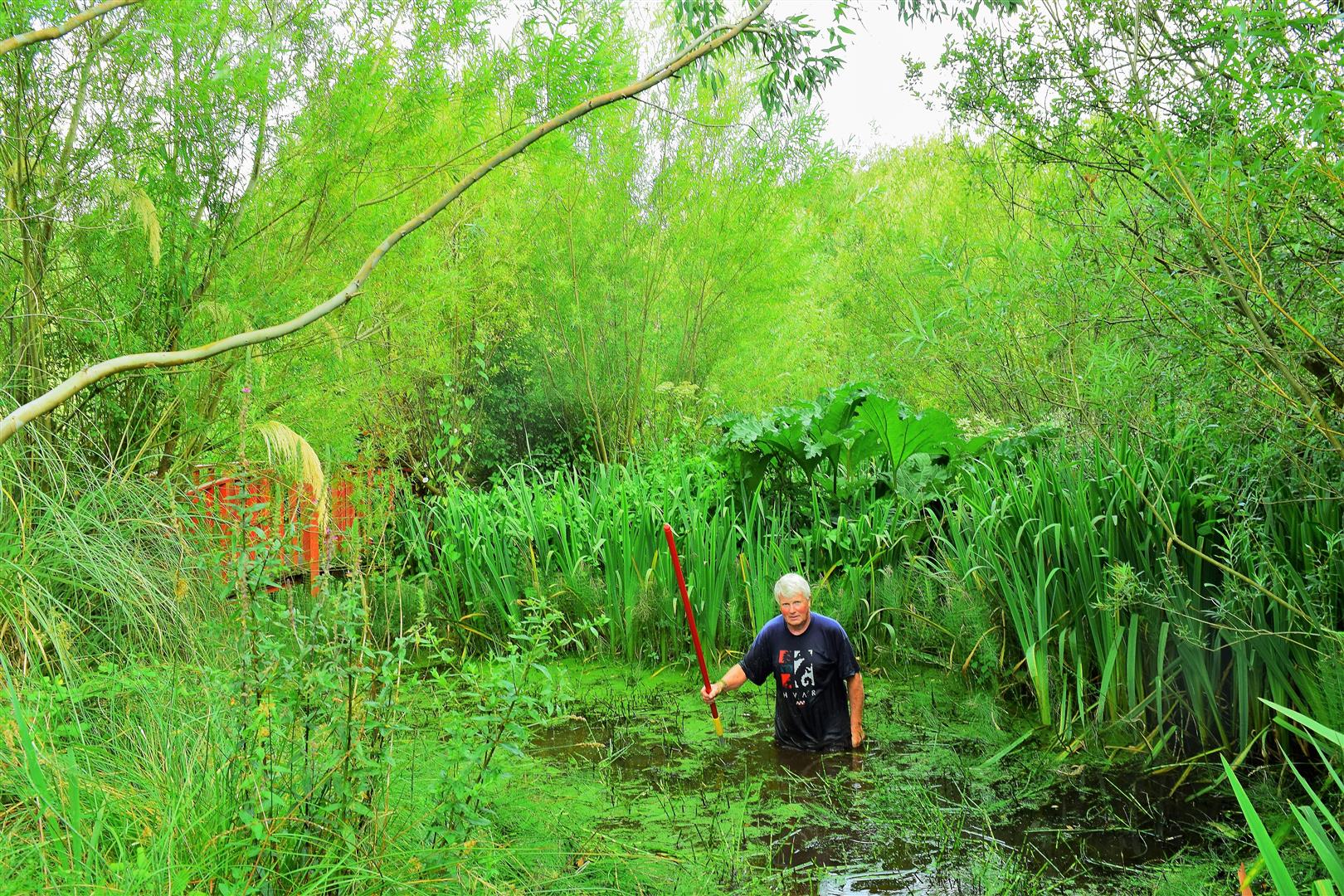 Our wild water hens love them and this is the third clutch of eggs being raised in the one nest already this year and so well concealed I almost stepped on it … of course I had to retreat and leave this clump alone until the nesting season is over . The water hen is a shy bird but hides so well in her well designed and camouflaged nest that she will often nestle down and rely on the camouflage to escape notice and I find in trying to photograph a water hen or even just to creep up on her to enjoy just watching her that making a bit of noise is better than trying to creep up as more often she will just hunker down until you move off rather than she suddenly hears you and gets spooked .

I managed to take this photo two years ago in the same nest . 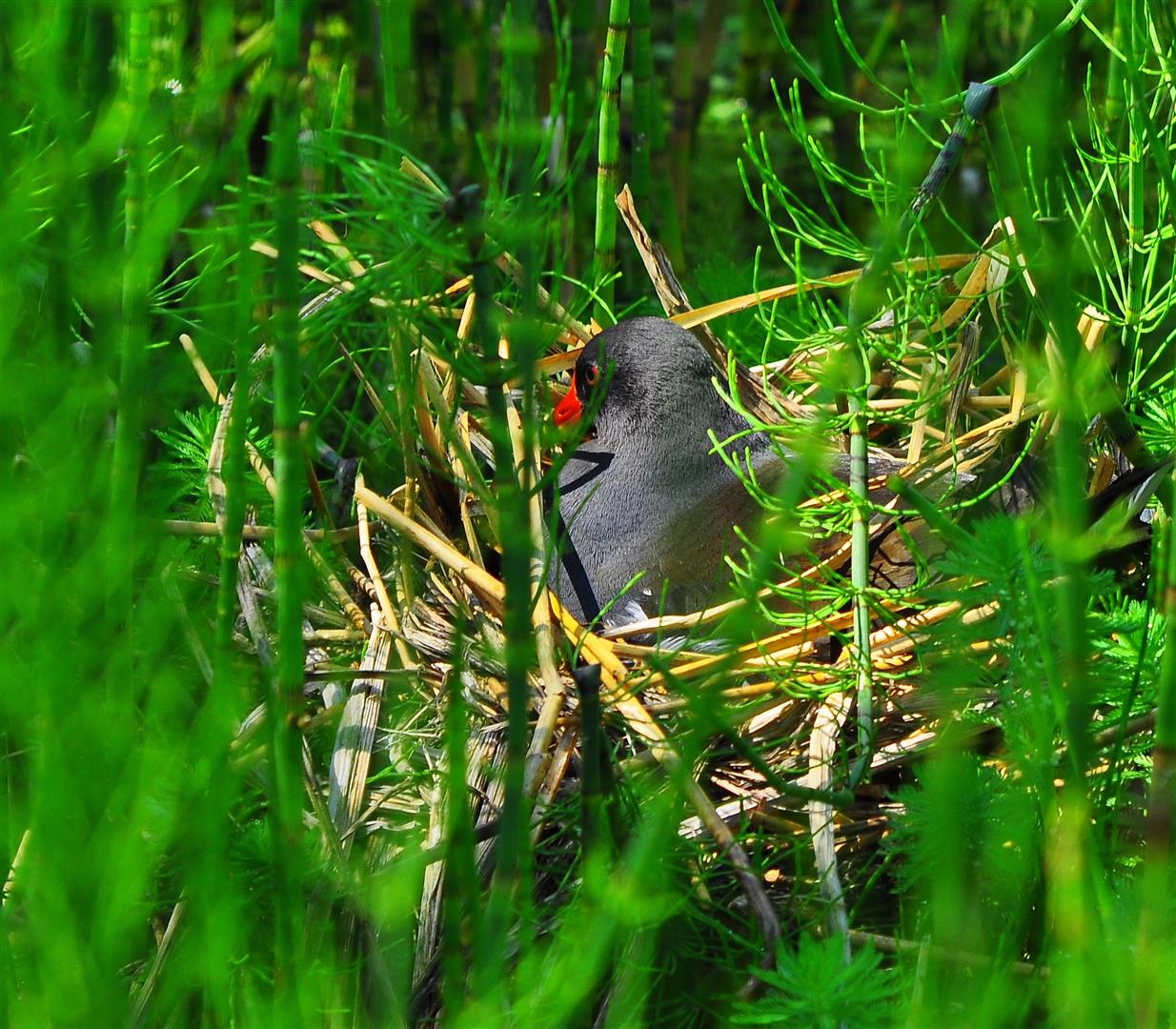 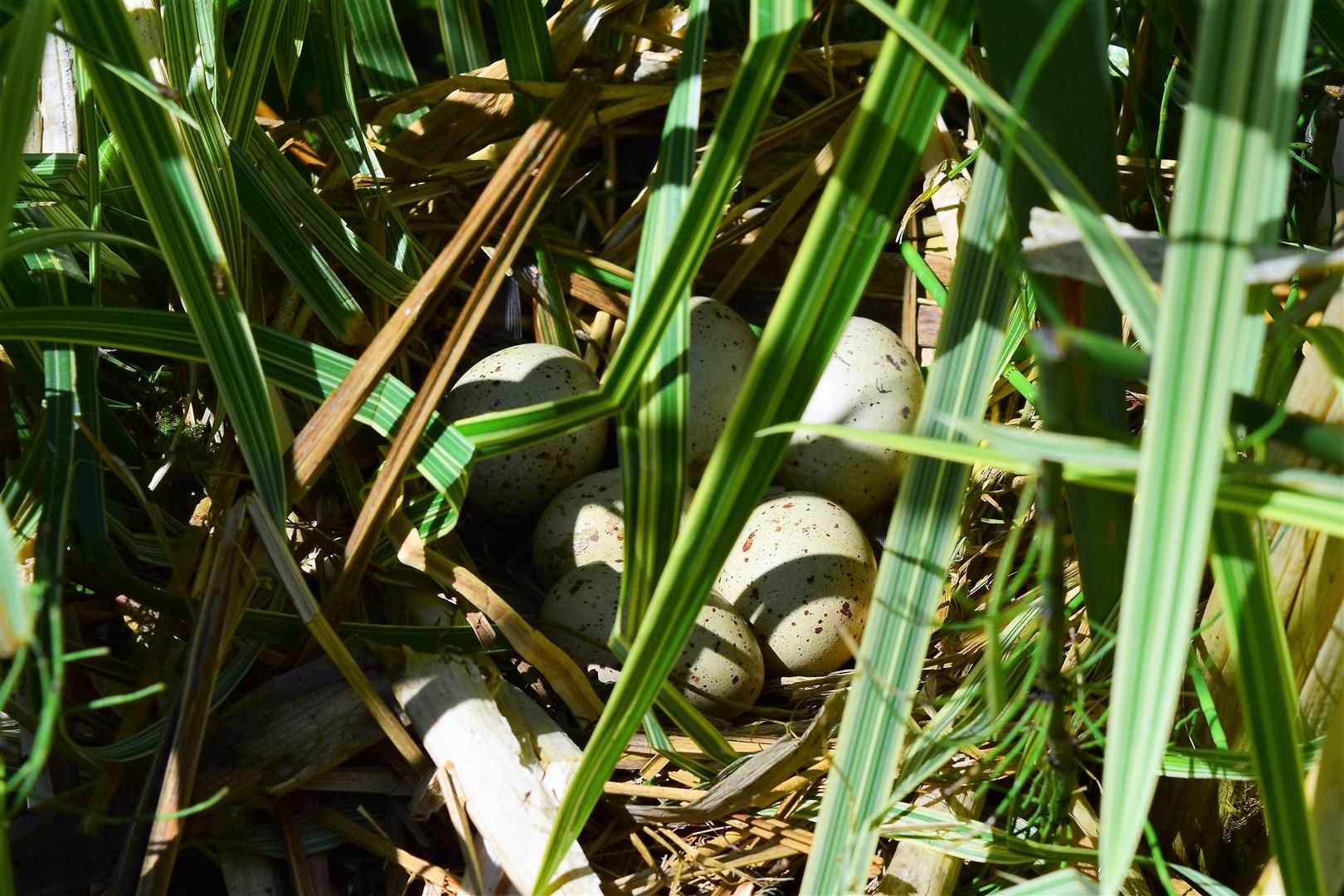 It is mid July so colour and freshness everywhere you look in the garden . 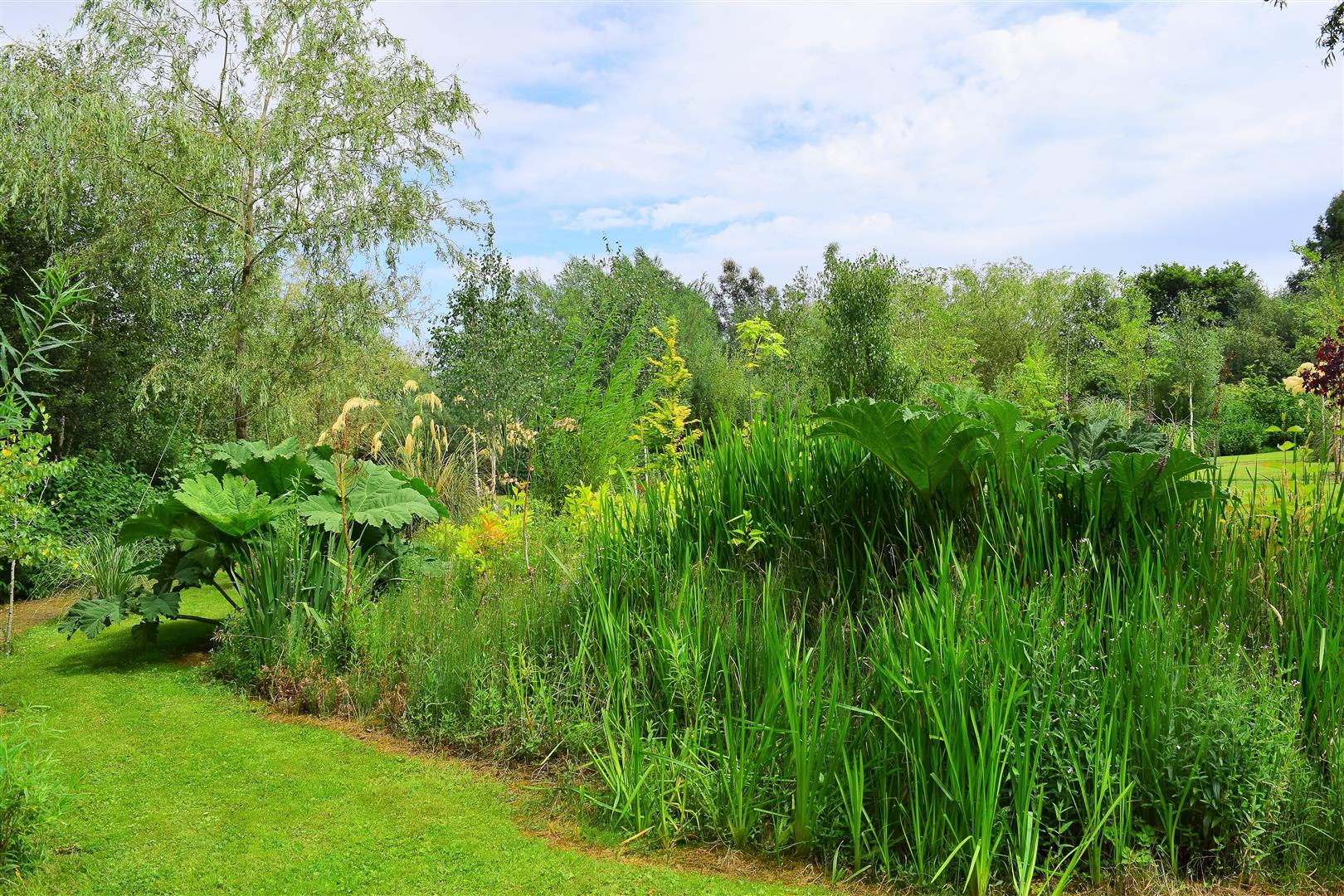 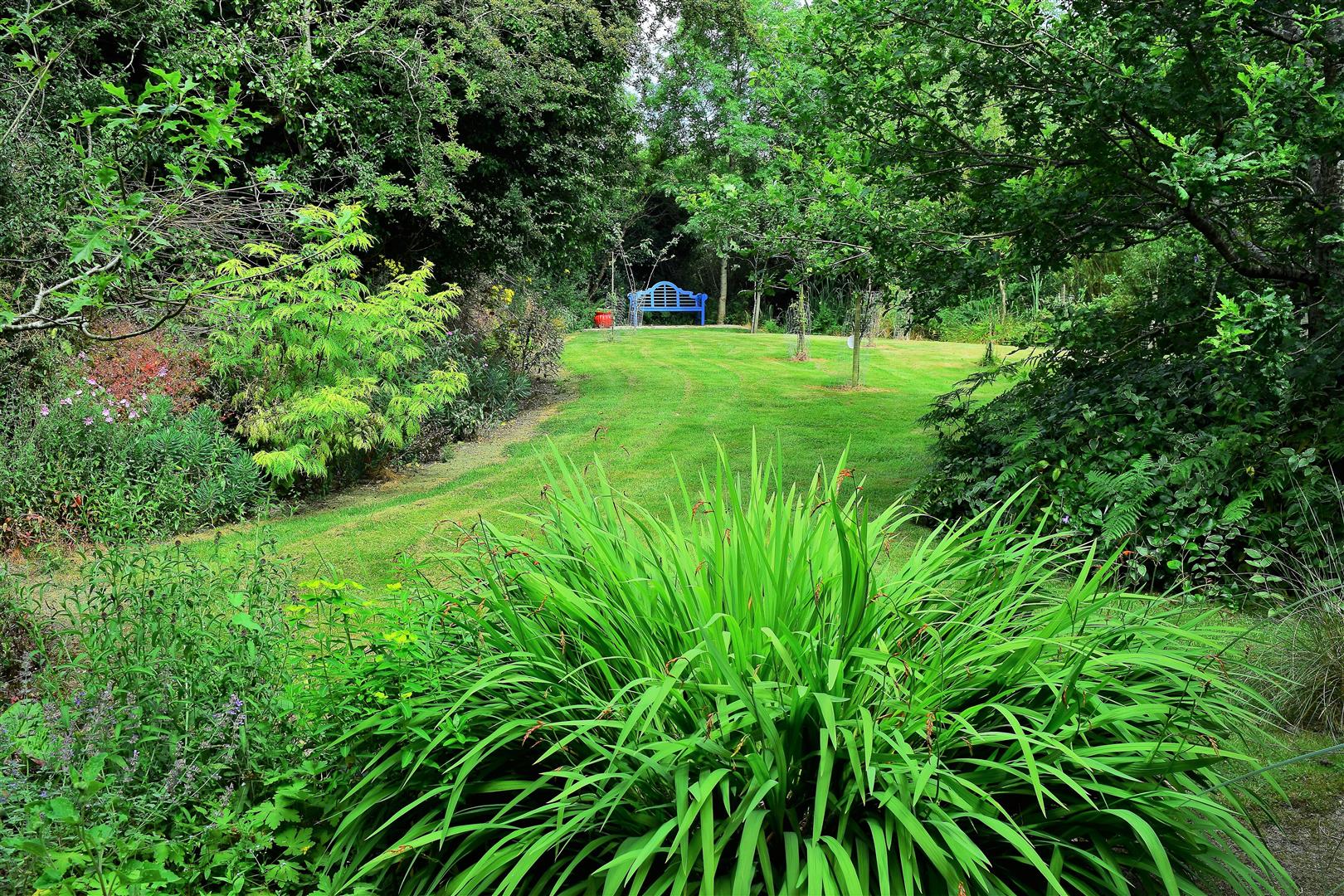 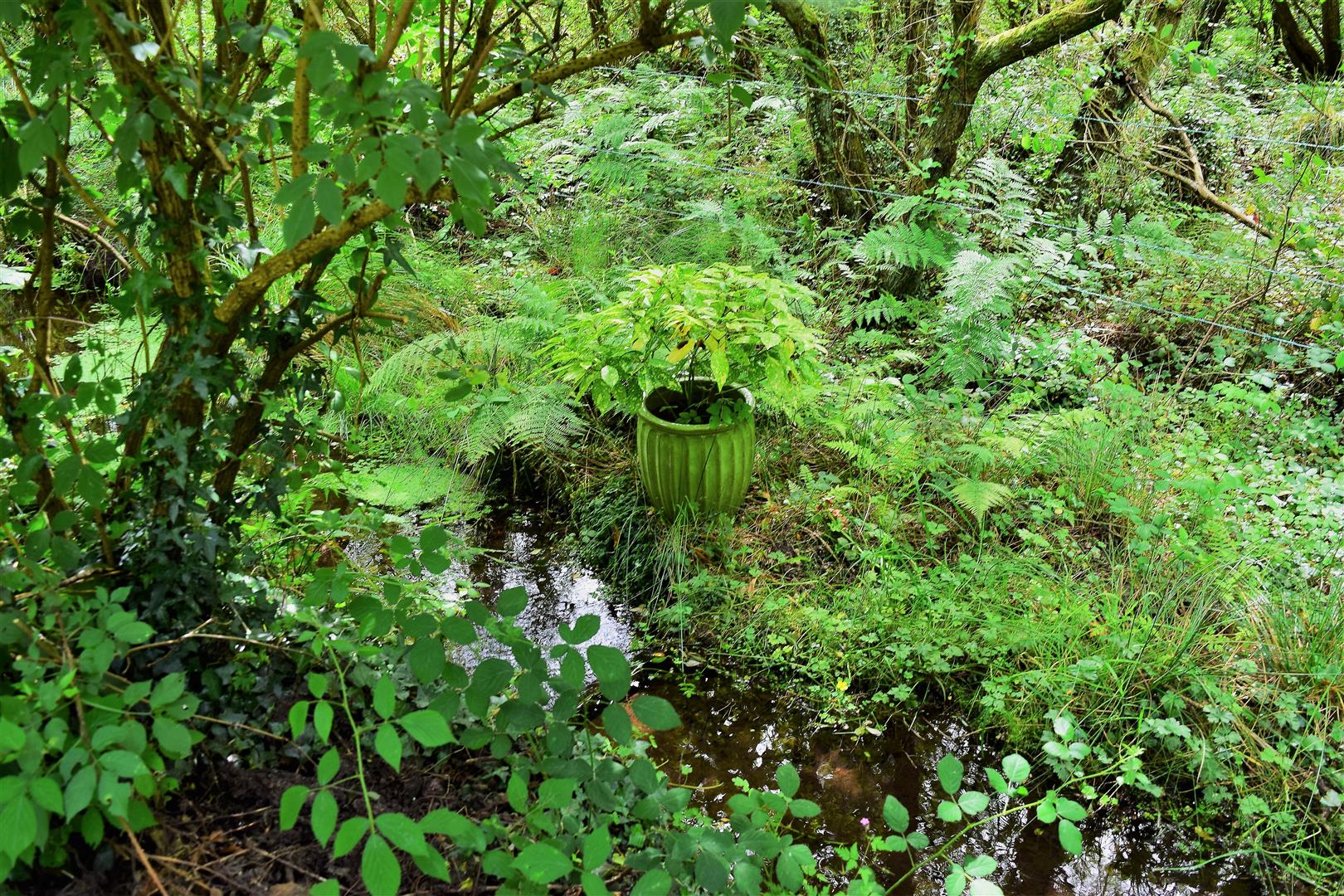 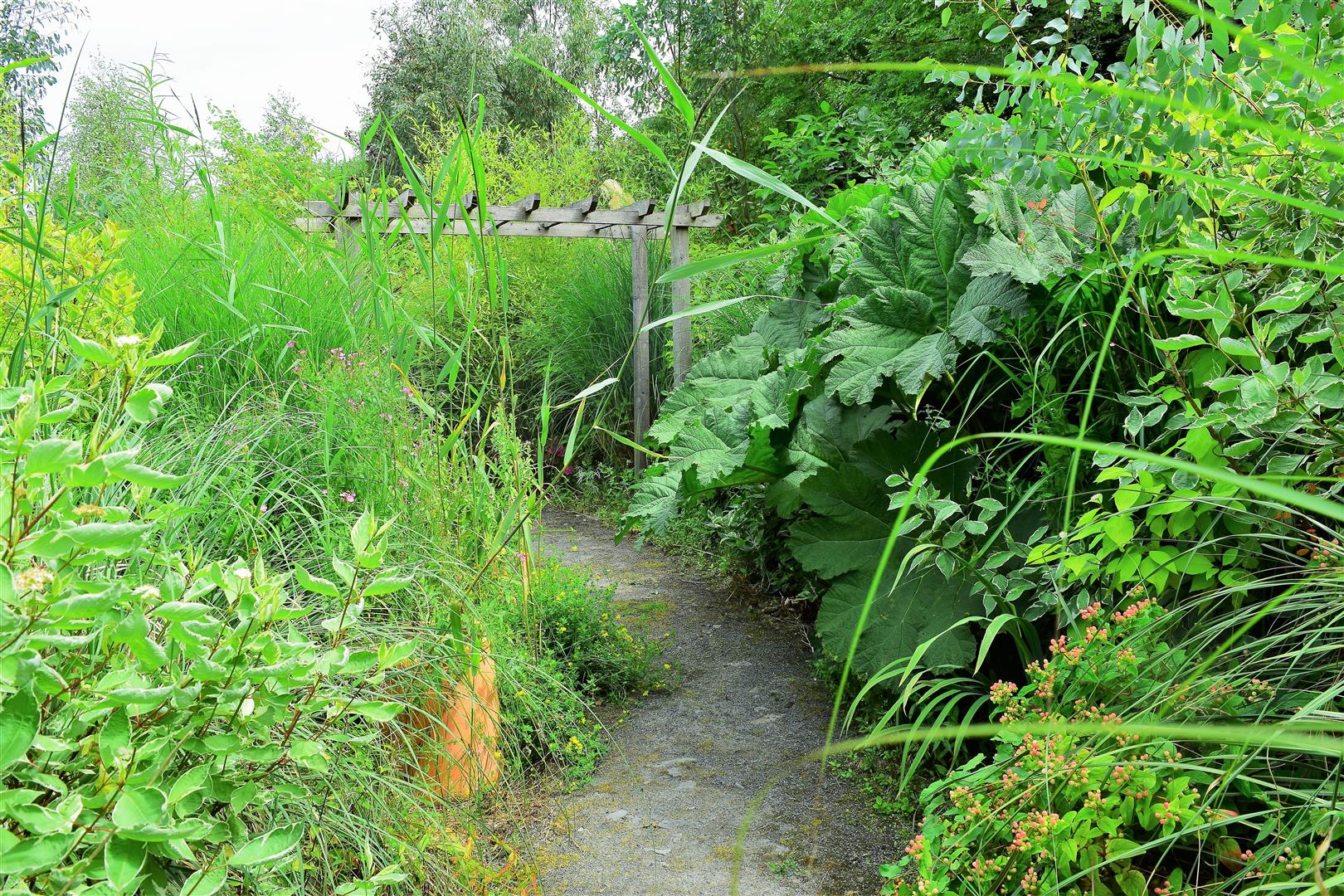 Finally five years after Flossie passed away we have acquired a new pet , Jessica , and a companion for Toby ! 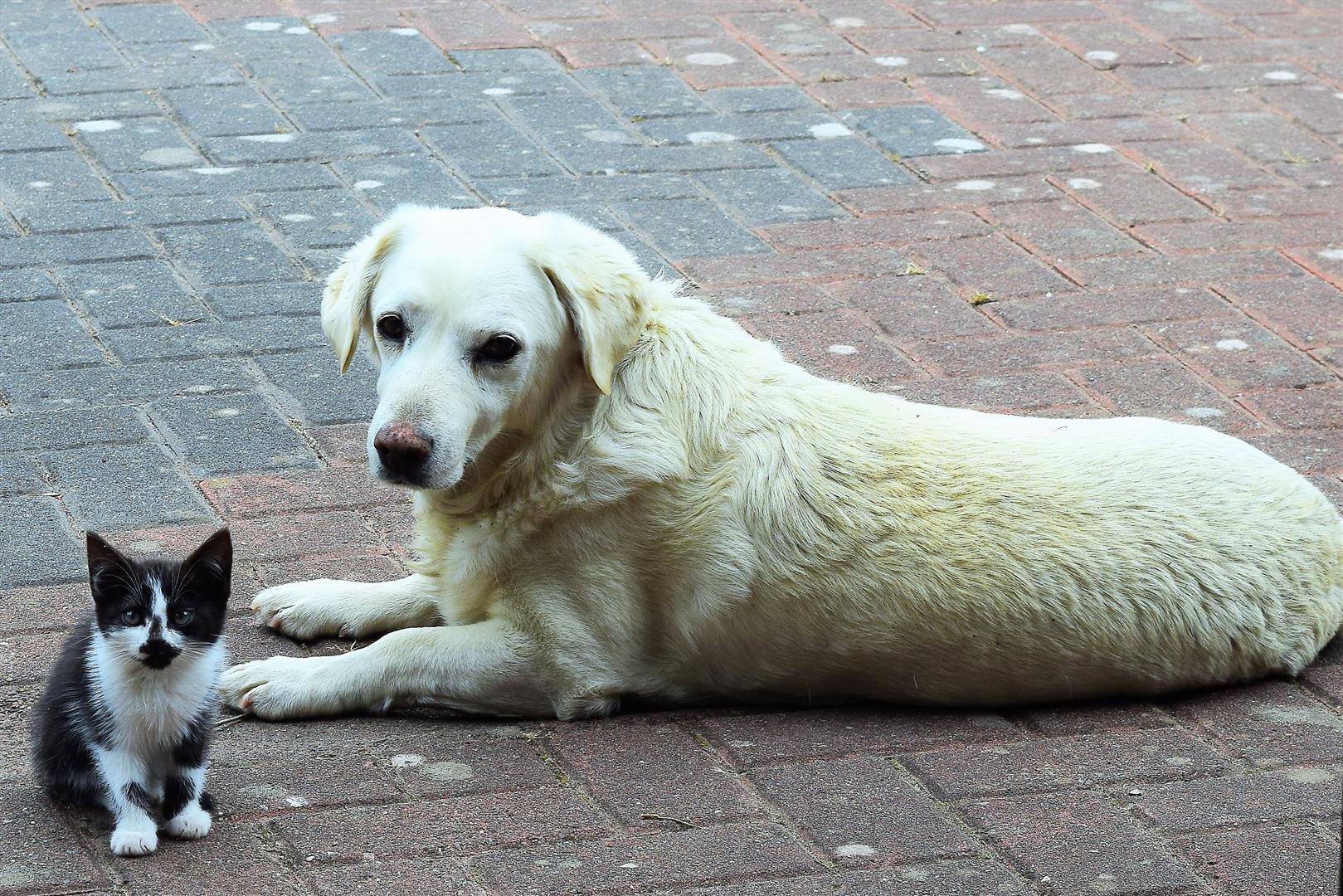