My Gardening Week February 28th 2018 … thank you Mr. Putin , the Beast from the East has arrived ! 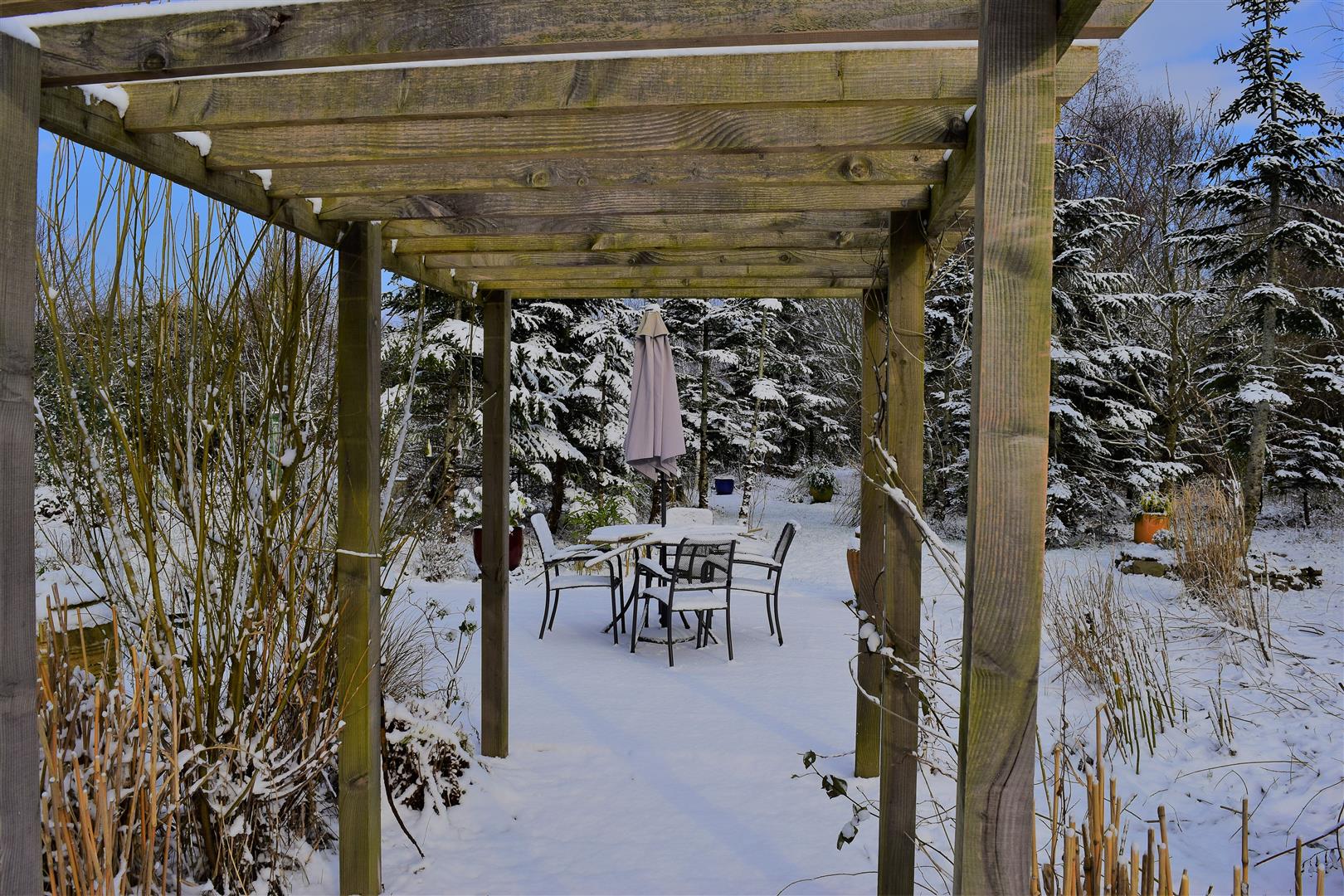 Ireland went into lock down for two days ahead of the arrival of Storm Emma and the Beast from the East and the entire country went hysterical and emptied the supermarket shelves everywhere with enough food to last a siege of two weeks instead of two days … an event like this hits us every twenty years or so and we are totally unprepared mentally for it , vanishing indoors for the entire duration and binging on box sets and maltesers ! My friends in the Balkans , where I worked for fourteen years , are left wondering what a group of pussies we are as out there it snows from mid December with over a metre deep snow staying until mid March at least and apart from the first day’s hard snow the road are passable and life goes on and I remember one winter a snow avalanche fell down on the road from Sarajevo to Gorazde blocking it totally with a snow drift 30 metres high … the local authorities immediately cut a snow tunnel through it and we were driving through that tunnel for the next three months .

The snow here was the only the second time in fifteen years I have seen heavy snow in the garden but luckily the temperature was only one degree below freezing for two days so apart from a few broken branches from the weight of the snow there should not be any plant losses … but for that period it turns the garden into a magical fairyland . 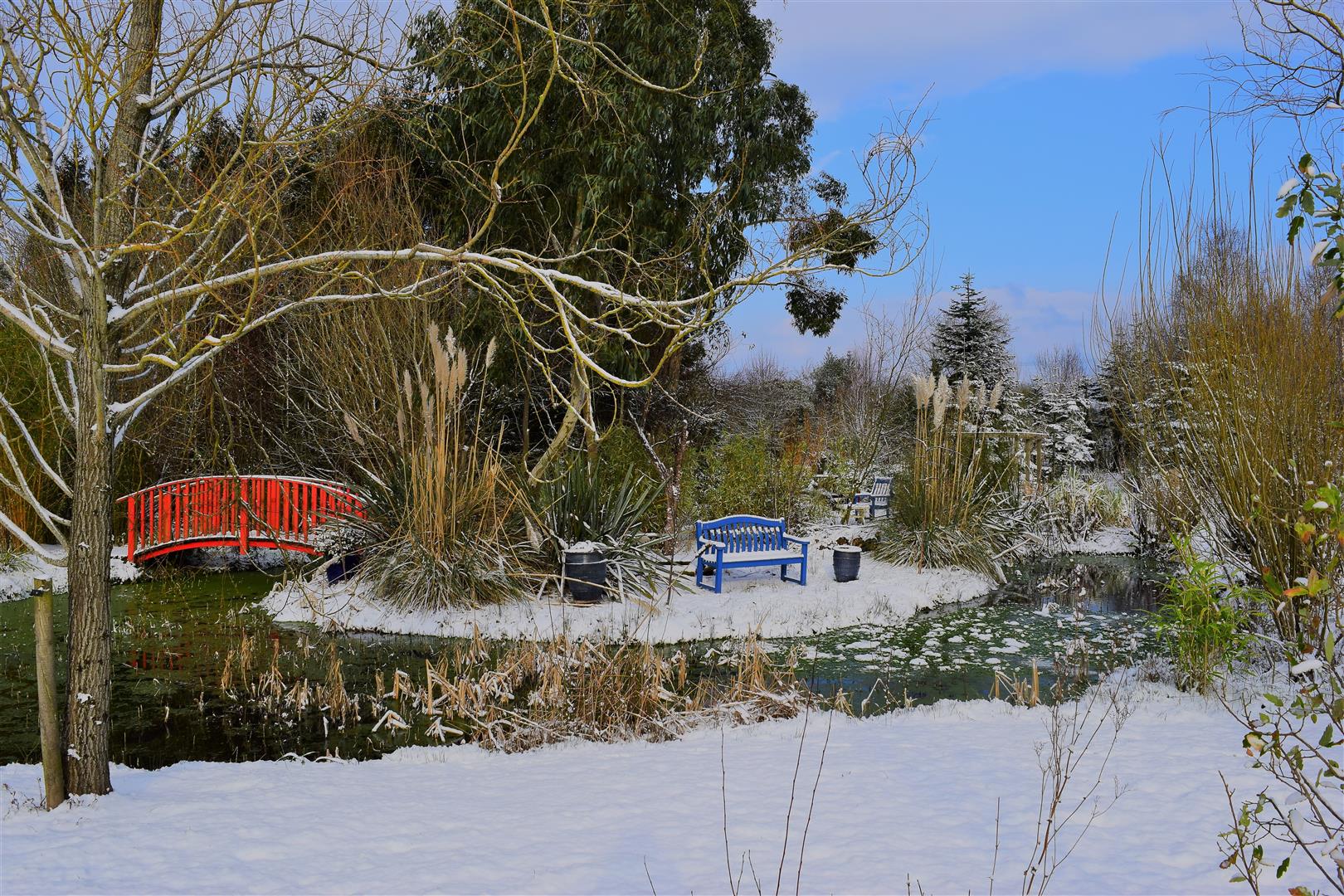 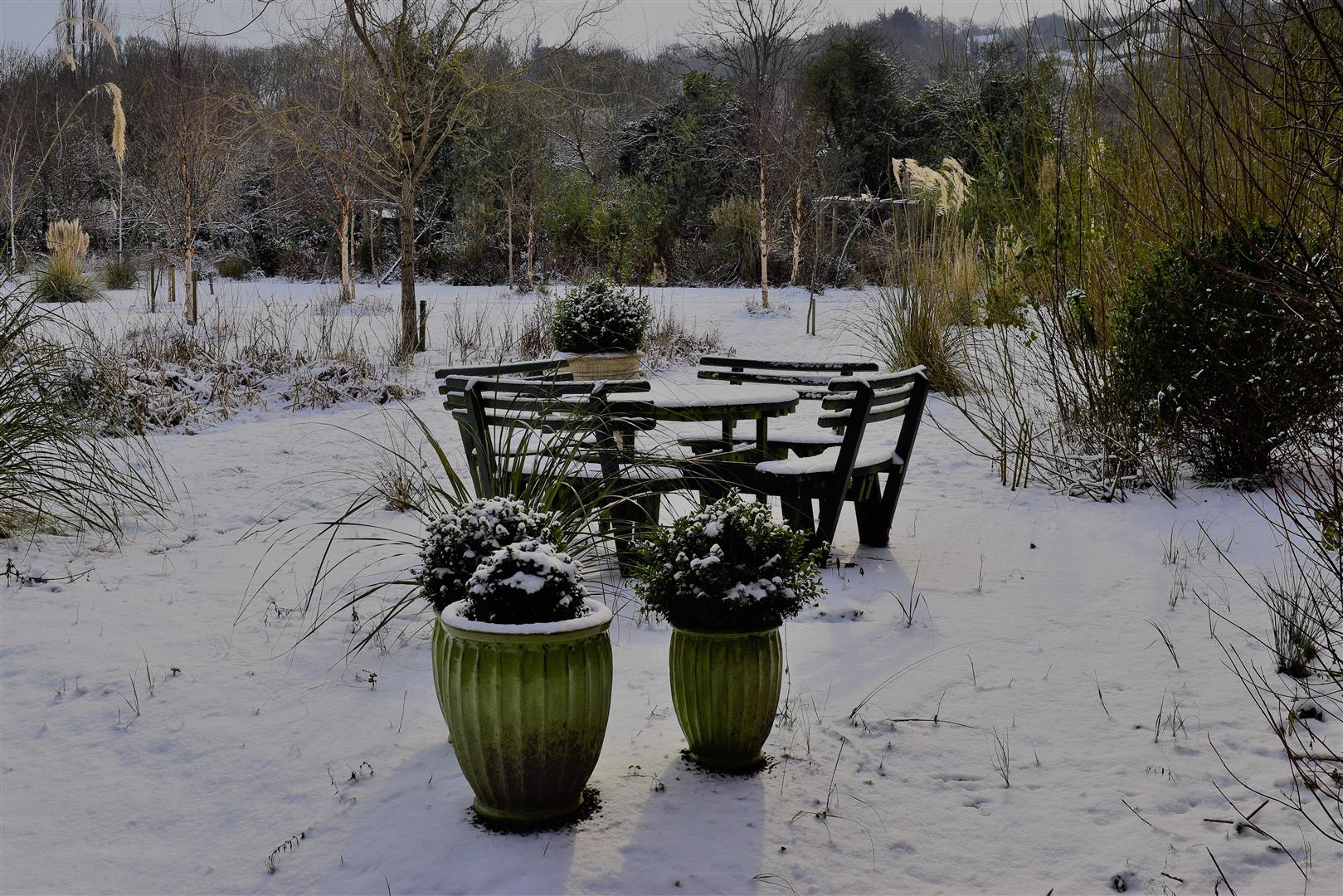 There is an old saying that too many cooks spoil the broth and as in cooking so in gardening i.e. there can only be ONE Head Gardener , same in this garden only the other one doesen’t realise it ! In this garden we manage to avoid each other most of the time and the division of work means that I have to do the mundane necessary jobs while Snezana gets to do what she likes to do in the garden which is basically cutting and pruning … naturally she disputes my definition of the division of work and hates the use of weed killer and slug killers both of which I am a true believer in as I like my hostas without holes in them and by the way any gardener , usually female , who tell you they prefer natural methods and NEVER use slug pellets … well dear reader they lie … THEY LIE !!

Most keen gardening couples who share a garden seem to divide the garden with the dominant one , usually the wife , taking the back garden and the other partner operates in the front garden and generally does what he is told which is why they get along  !  In this garden all new projects are agreed jointly but the day to day stuff often deteriorates into open warfare usually over the hard cutting back that Snezana loves to practice with her chain saw but until now we have always made it back to the house on speaking terms … barely !!

February has been spent cutting back the ornamental grasses and the dogwoods and we have three substantial bonfires over three metres high ready to be burnt when the weather has dried out . I prepare cuttings from the pollardings of the golden willows and cornus’s  , about a foot long which I plant immediately where I want them to grow  and get probably a 70% strike rate from these . Leaving the pruning any later than February with the dogwoods especially will damage the buds which start to show from early March . 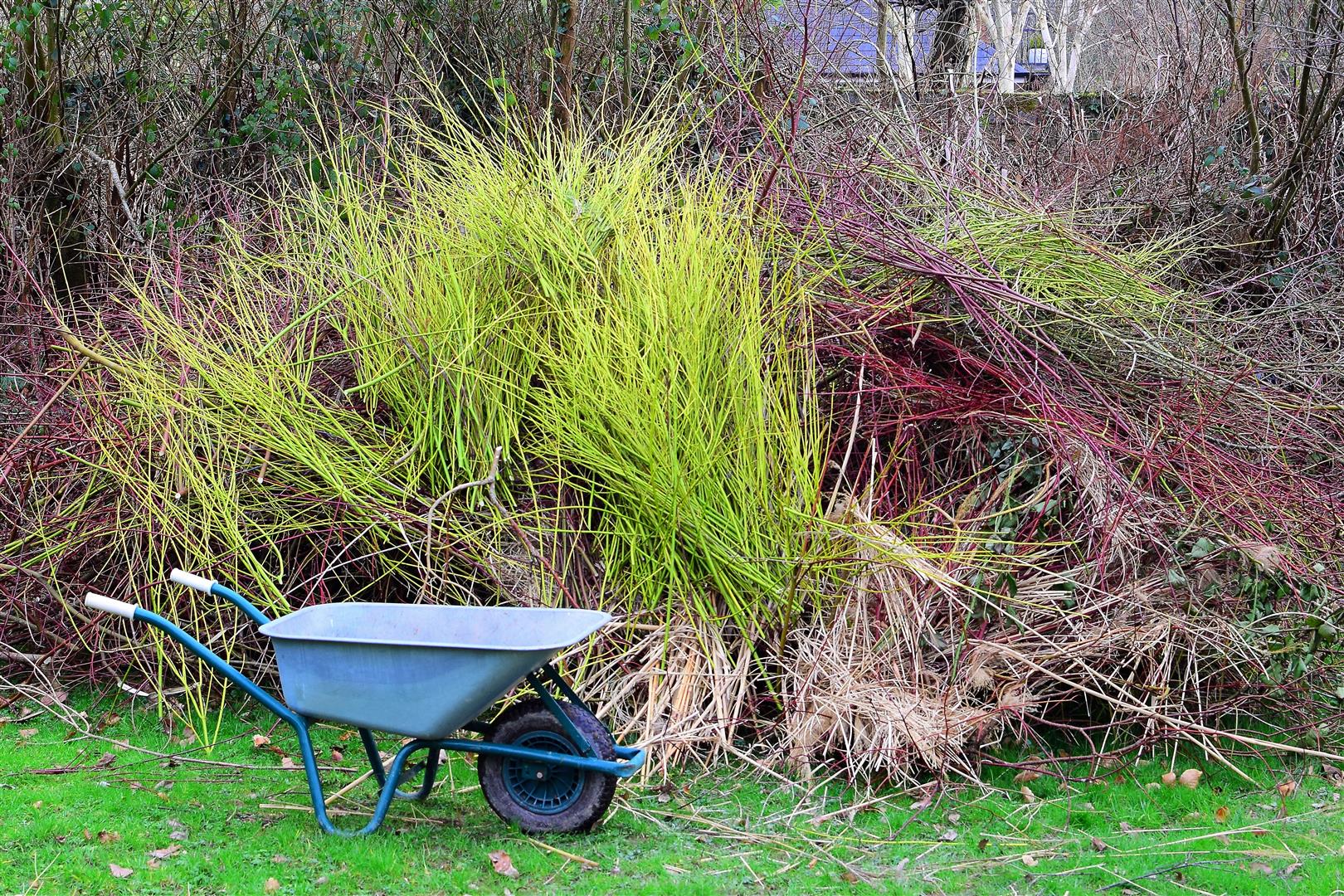 When we began planting this garden in earnest twelve years ago it was just wet fields with nothing but rough grass , brambles , thistles , docks and rushes and you could see all across to the boundary hedges where there were nice native ash and oak growing wild so we needed a selection of fast growing trees and shrubs to fill the large empty spaces and because it was wet we needed plants that could tolerate boggy conditions which is why willows and cornus were the ideal choice . The first path we laid down through the top field just looked on empty areas on both sides so my original thought was to clothe the path with four metre deep shrubberies on both sides so that you would at least have something to look at and which would conceal the total lack of any structure which lay beyond . This worked nicely for the first five or six years but then got too invasive and besides now we had built some structure into the top fields with extra paths and large scale planting of silver birch so there now was something to look at which the overgrown shrubberies were blocking so two years ago I started to cut back the cornus and this January we really cut them back hard … cornus when left to itself gets thick knarly branches and they lose their bark colour a bit but hard pruning produces snappy young growth particularly with the yellow bark varieties as can be seen in the photo below and after I took this photo I cut the remaining dogwoods to the ground . 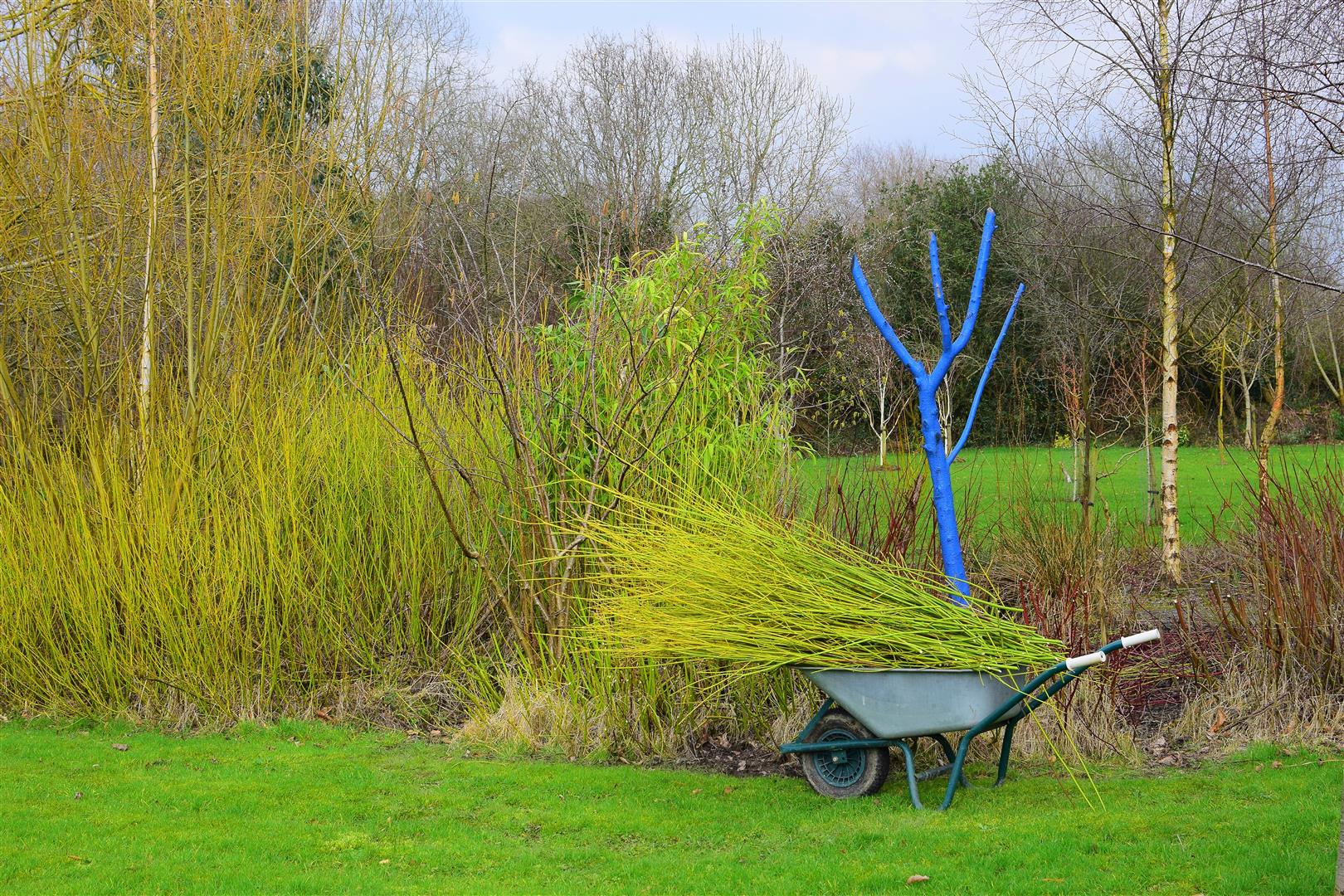 Cutting back the ornamental miscanthus grass is something I do religiously each February , very time consuming but a job I believe in as it both tidies up the plant but helps stimulate the new growth … timing is critical as leaving it until March for example means there can be new growth already which you will also cut and this can stunt the overall vigour of the plant in May / June … seeing the precise nature of the pruning Snezana asked what effect it would have on the plant if left uncut and of course nature would follow it’s natural course in that the old foliage would fall over as the new growth pushed through … so why do it was the obvious next question and the perceived gardening wisdom in cutting back grasses is to get the new season’s growth away quickly , put all the plants reserves exclusively into new growth and also to tidy up what will be a messy looking plant otherwise … and if like me you grow a lot of miscanthus in groups the whole area will be very messy . Grasses left to nature will eventually exhaust themselves and die out but hard pruning annually rejuvenates plant life and can keep it going for years . 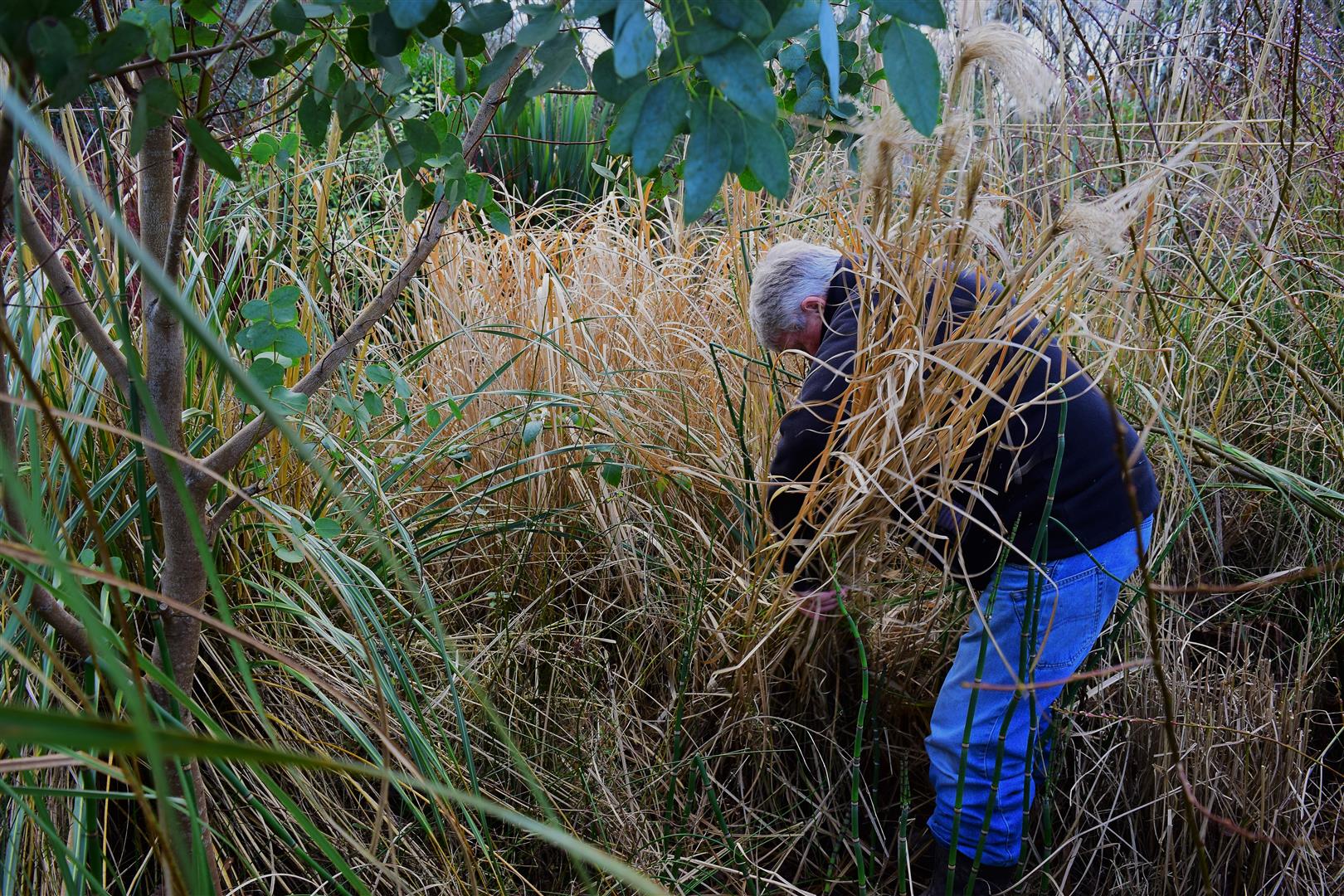 Gardening is of course in a lot of ways unnatural as we force nature to comply with our own ideas of what nature should look like and indeed if left to it’s own devices nature will grow along quite happily but gardeners try for the impossible sometimes , growing plants in the wrong conditions etc. crimping and cossetting plants so it really ends up as a compromise and while I have no problem with the odd wild flower meadow especially in orchards generally I like to keep the garden weed free , my hostas slug free and the lawns cut on a regular basis while all around us are natural wet fields left to their own devices with docks and thistles thriving and only the occasional horses and sheep to chomp on them and yes our eight acres is not natural when you look on the neighbouring fields … as I said a compromise ! Just after the Bosnian War ended in late 1995 I drove through an eighteen mile stretch of asphalt road which had been totally closed and mined for over five years and it was amazing to see what had grown with silver birch trees growing away happily through the road surface and almost every few metres the road was covered in clumps of wild flowers and I am sure if left alone that road would have been obliterated by nature’s claw back within another few years .

Our outdoor shower always attracts comments from visitors to the garden and when I tell them that we both have showers outside each morning all year round in all weathers the usual question is “ is it heated ” , the photos below show Snezana during the snow spell in early February and no it is NOT heated !! 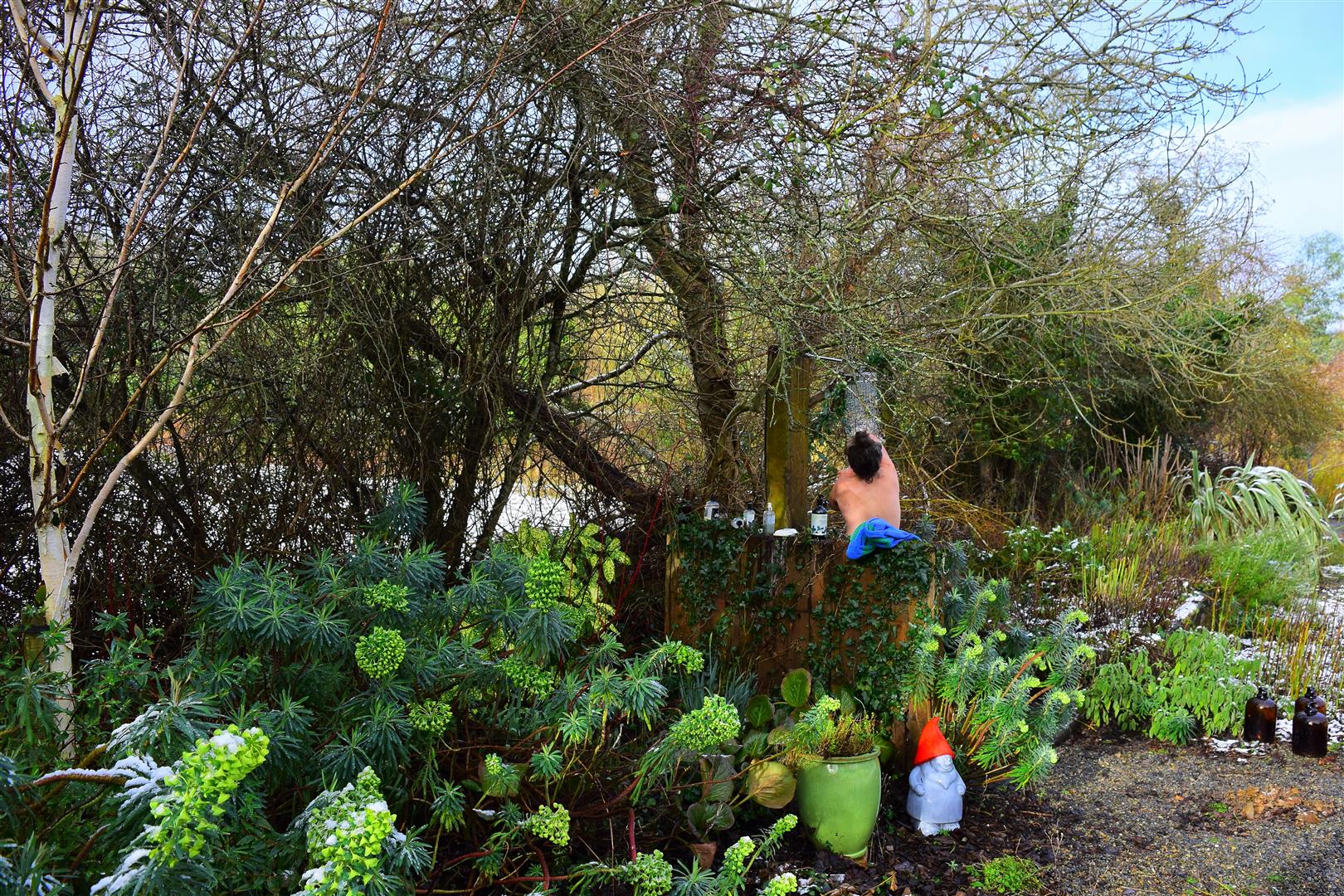 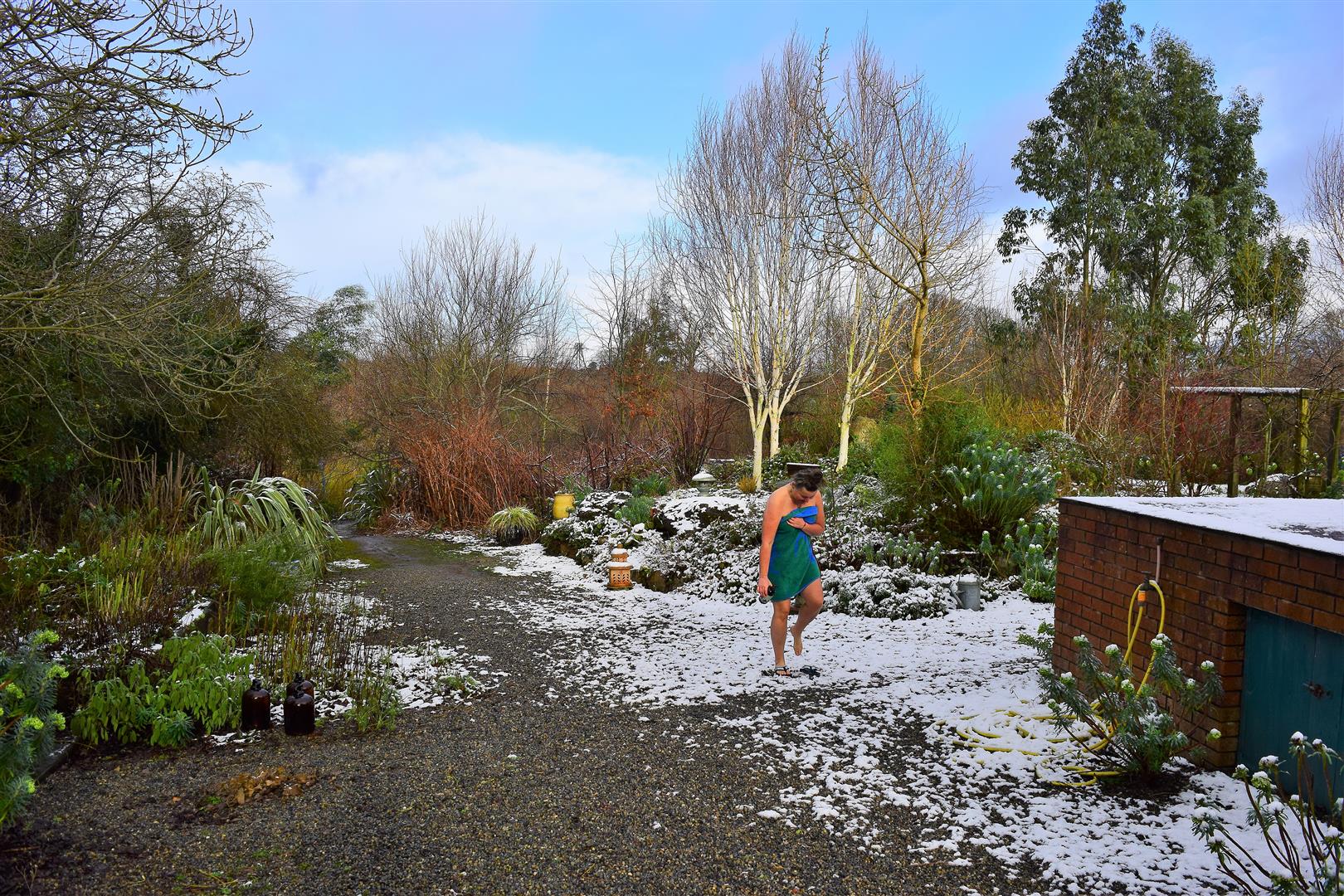 Two trees that are almost ignored here in Ireland are the golden ash , fraxinus aurea , and the golden alder , alnus aurea , both have terrific bark and look great in the winter where their golden colour really shines . The golden ash like it’s more common brother will do best in dry conditions and will not tolerate wet growing conditions while the alder will do well in almost water logged soil and because neither is a grafted tree they do not try to revert to a rootstock and unlike golden willows hold an erect shape … as I said not best sellars here but the garden centres will order them in for you usually from Holland . 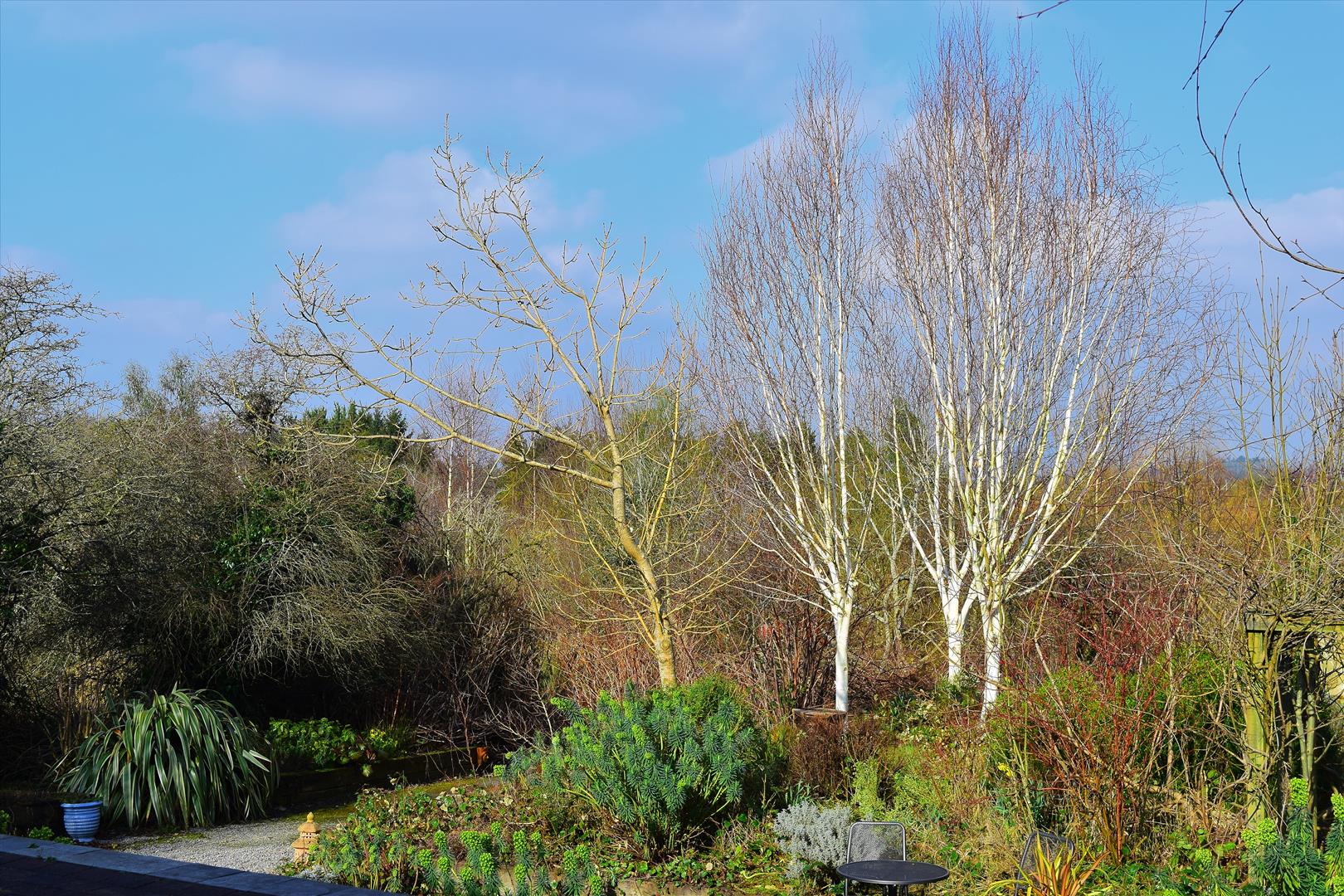 Both trees will only be available as fully grown two meter specimens in pots and are never available in the cheaper option of whips so are as expensive as silver birch and in the photo you see silver birch jacquemontii which if the budget is tight I would always go for  as my first choice of tree and if I had to choose between the golden alder and the ash however no matter how the budget is or how small the garden is there should always be room for a golden ash  .

Colour in the Garden in February 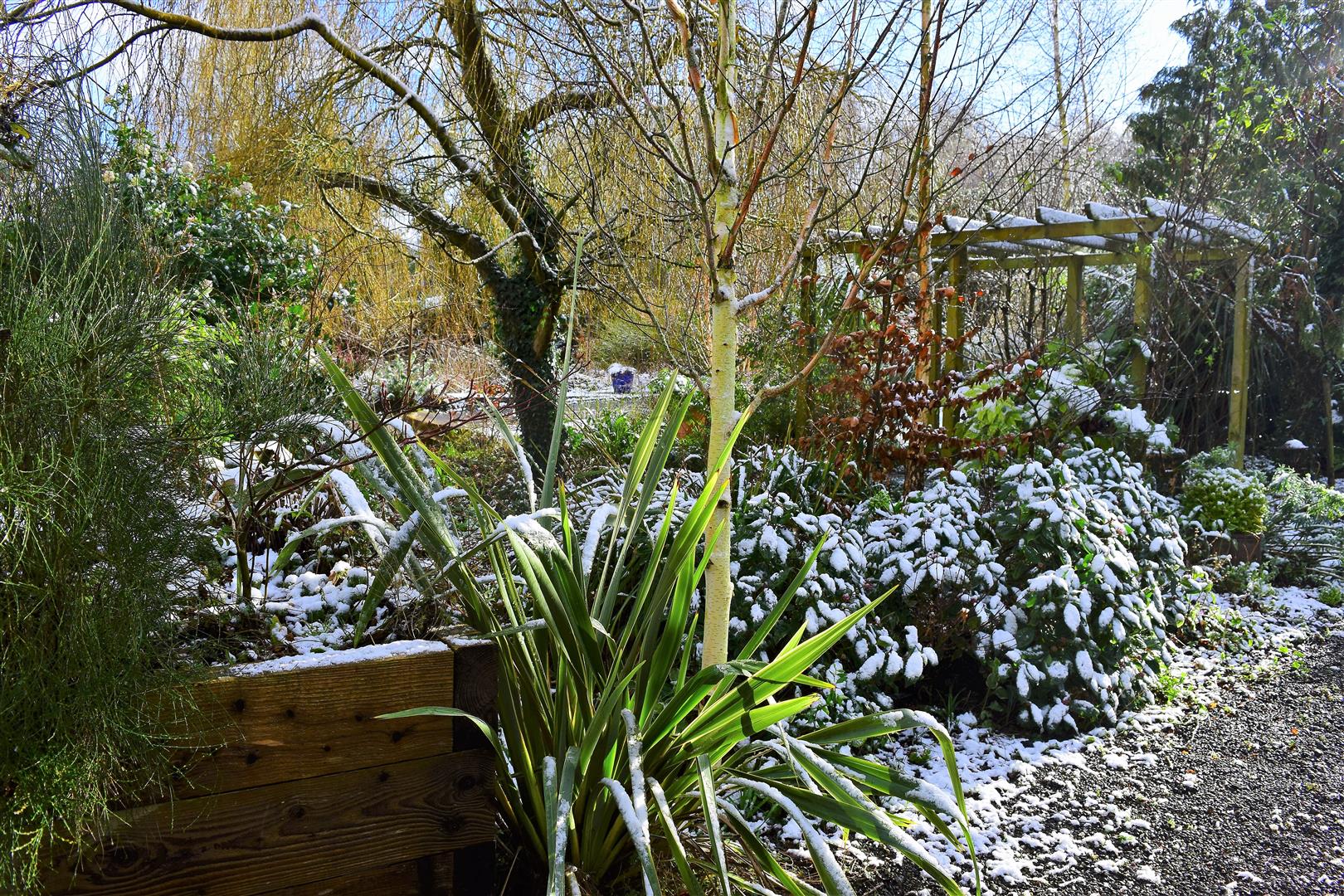 As soon as I finish this I will head out into the garden to see whether The Beast from the East has left it’s mark ! 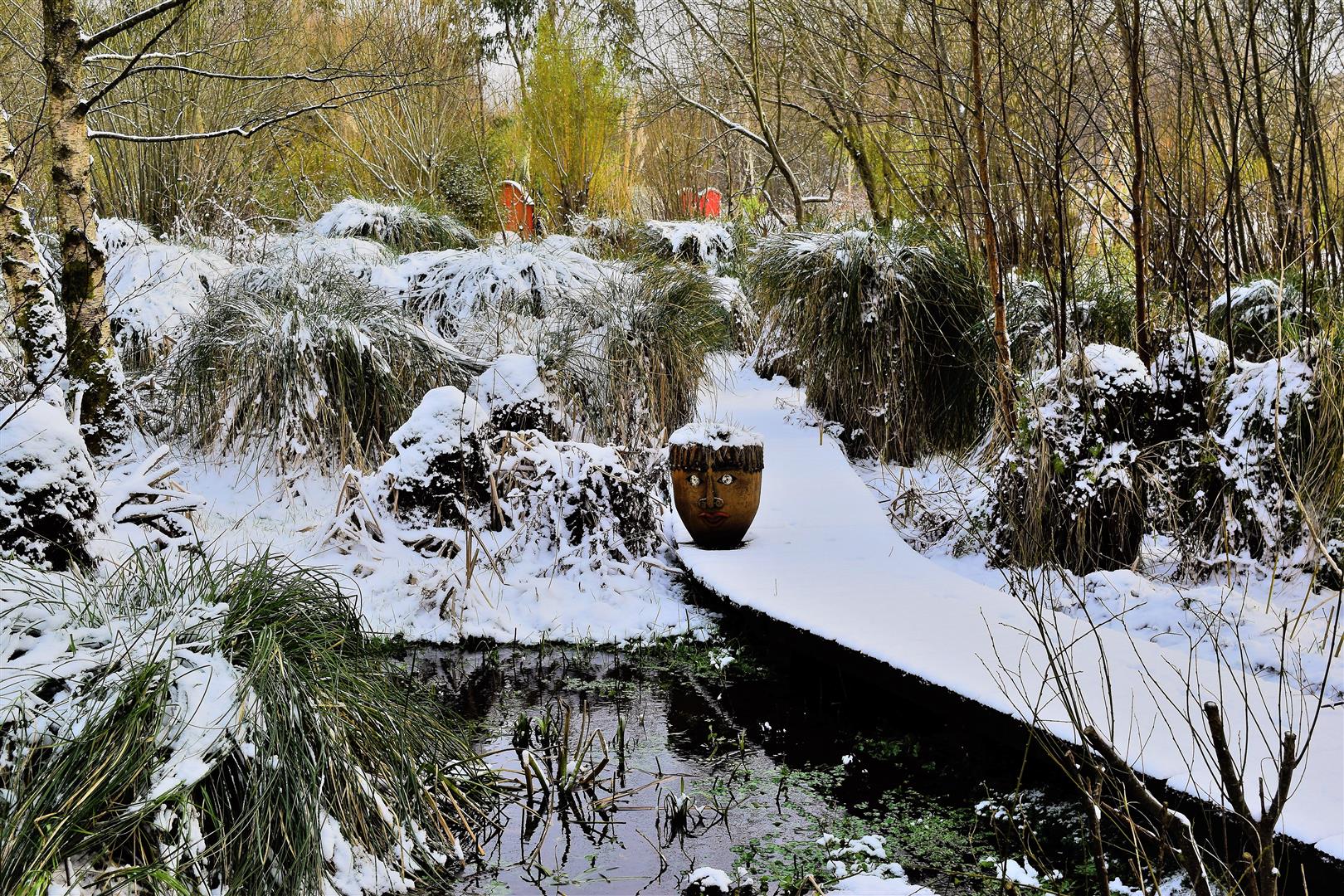 Having written about two trees here , the golden alder and ash , there is still only one tree in my book for maximum wow factor and impact , a tree that looks best in winter with stunning white bark and which has a beautiful soft downy leaf onwards , my first tree for any planting scheme … the silver birch variety jacquemontii … don’t be without it ! 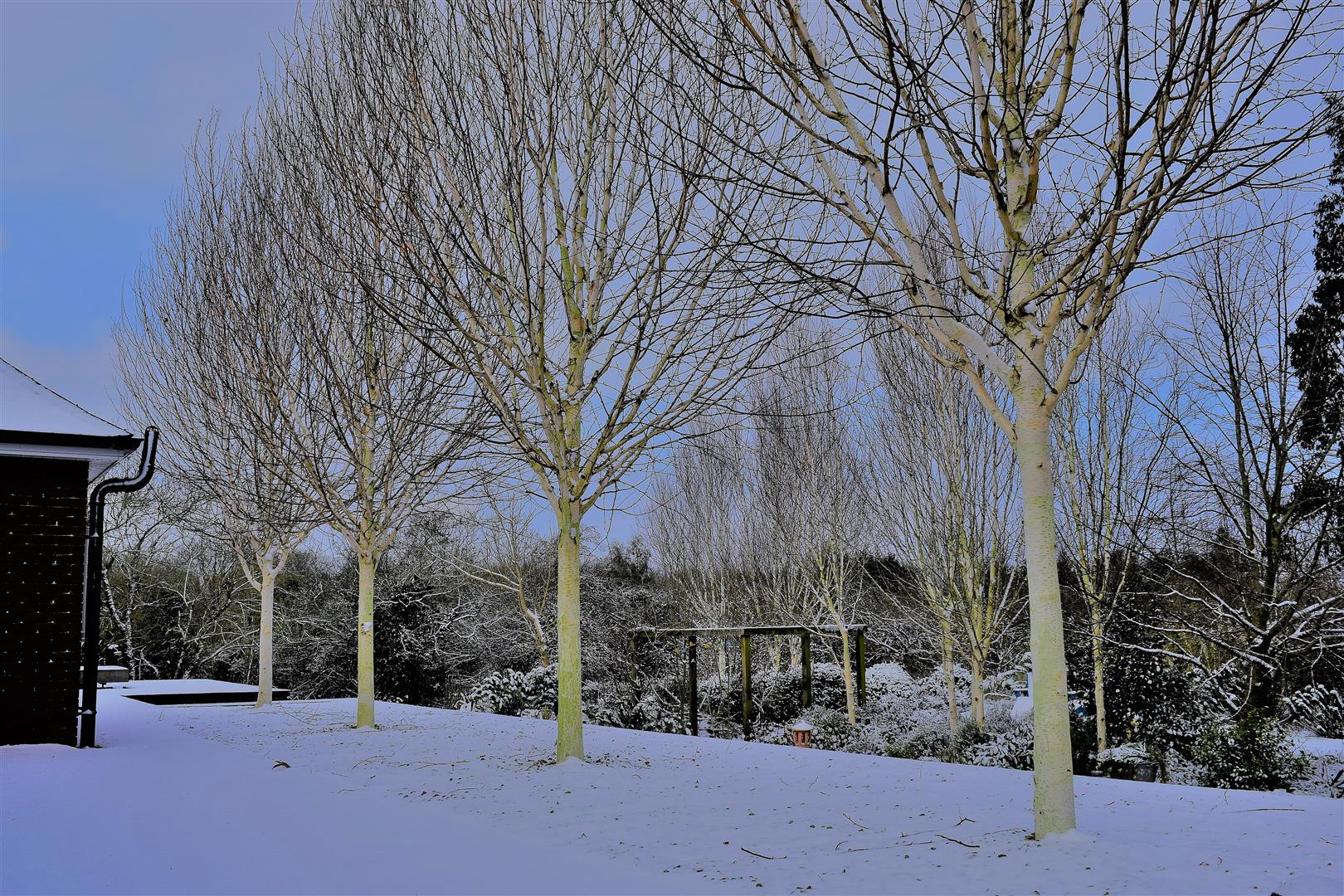