There is still some nice colour in the garden and only two weeks to Christmas . 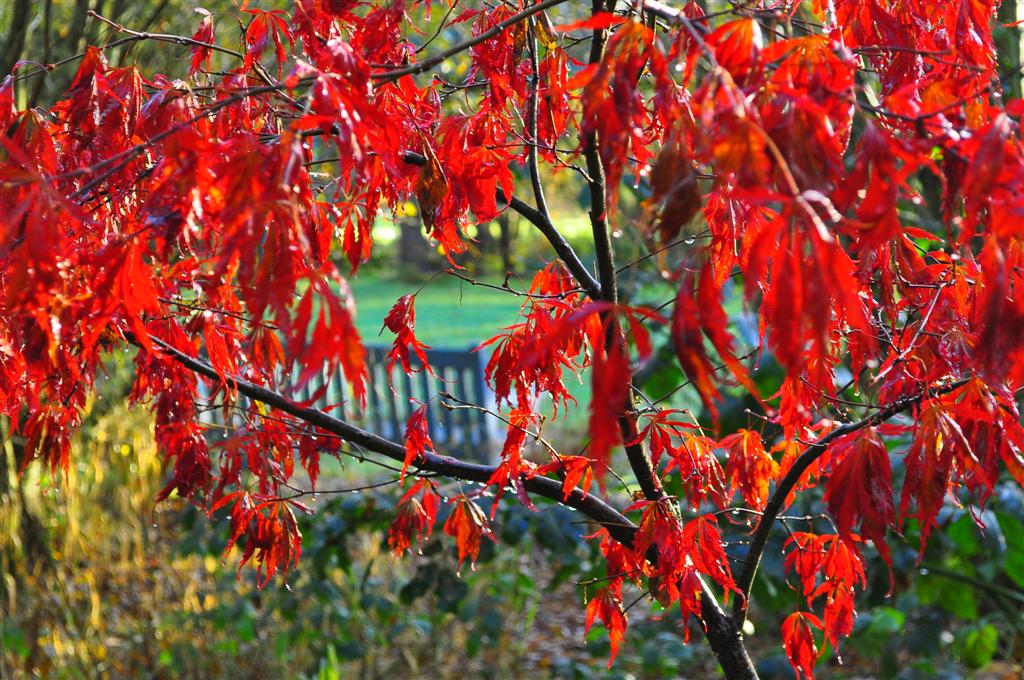 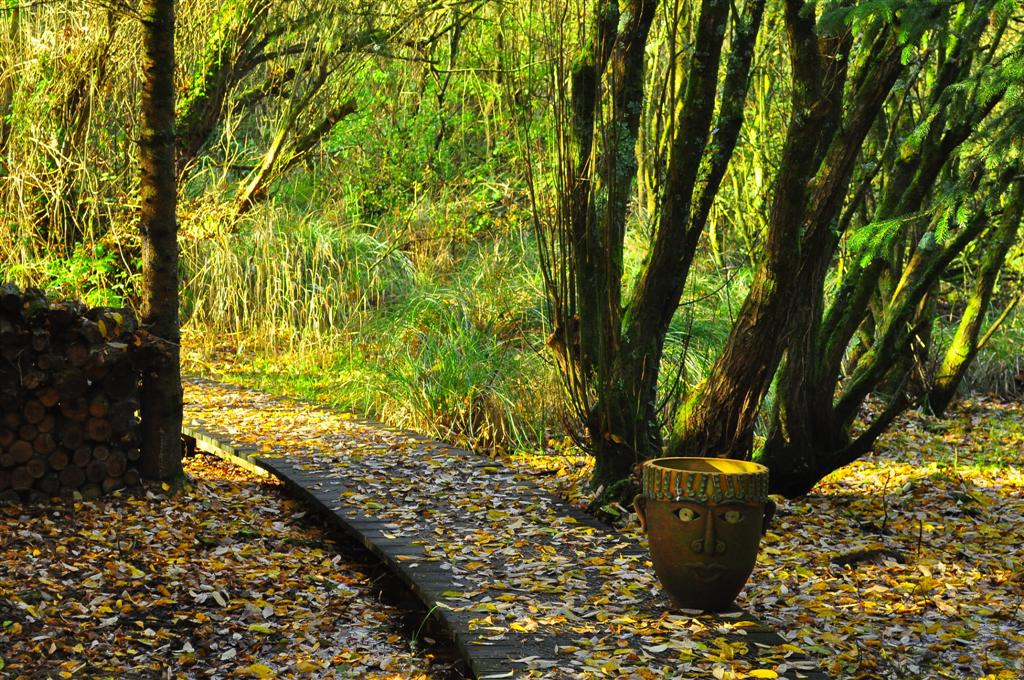 This week I finished tidying up the gunnera by folding the blackened  giant leaves back across the crown of each clump which will protect from the worst of the frost of January and February and I like to think these piles of folded giants will provide a warm snug shelter for any passing  hedgehogs for the next few months . 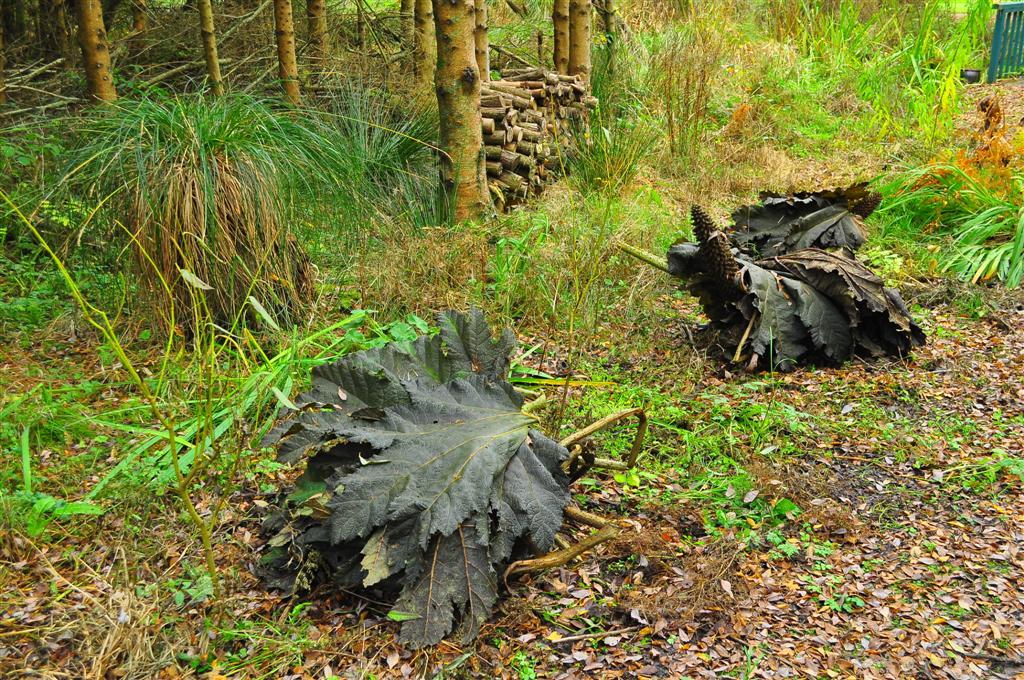 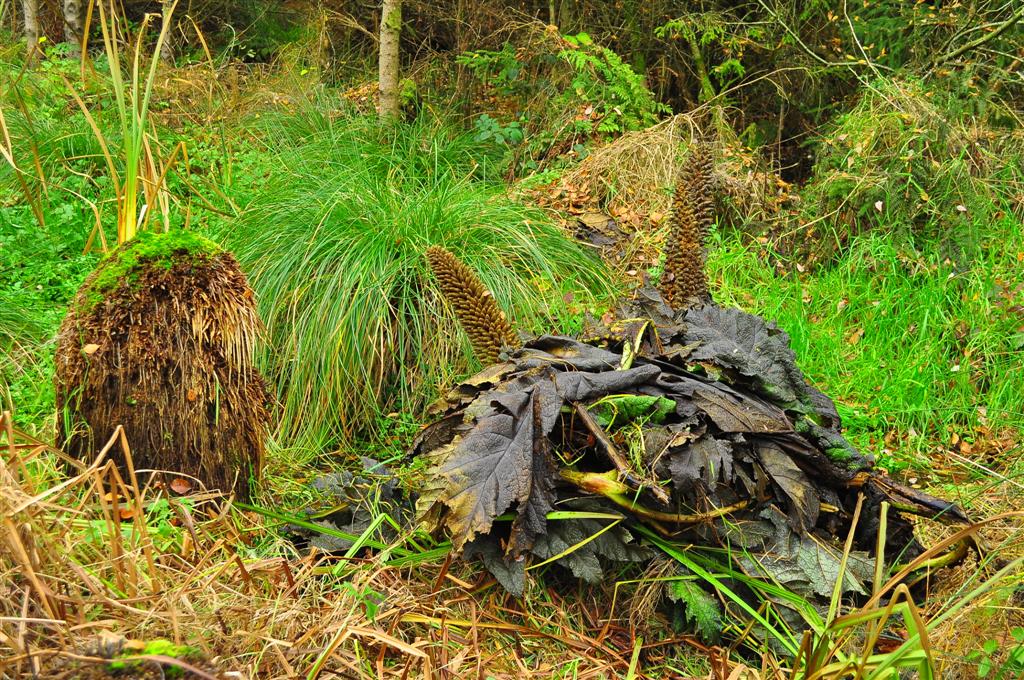 For the past three weeks I have mislaid my secateurs somewhere in the garden , my familiar red handled Felco one which I have had for the past ten years and no doubt it will turn up in spring from under a pile of leaves where I dropped it and because it is a Felco, a drop of oil and  it will be none the worse for wear but in the meantime I am edging closer to the Felco display cabinet in Glenconnor for a replacement set of secateurs …  toys for big boys  !

And on the subject of secateurs someone once asked when is the best time to prune roses for example and I always say whenever you have time as a little pruning never does any harm but for serious cutting back then you need to know your plants so if in doubt read up on the plant and the easiest way these days is to google it . When I say know your plant I am not referring to any special technique just know that too early pruning,  in January for example , can produce a resulting fresh growth  too early in the season which will die back in the next severe frost  and I never agree with an autumn hard pruning for roses as this can lead to young growth too early in February which a hard frost can then cut down and set the plant back … better in my experience to cut back roses in March .

There are volumes written about rose pruning , very intimidating stuff which puts beginners off and certainly put me off back in the day  but the RHS did a trial a few years ago at their Wisley HQ  with identical beds of roses , one of which was pruned in the traditional manner … at a full moon when Mars is rising in Saturn  type stuff … and the other by mowing to the ground with a chain saw like my wife would do … both beds grew back identically and flowered just as good so forget the mystique ! Generally you prune for several reasons , to cut out all the weak , woody and diseased shoots , cut away all branches growing across the plant to encourage the plant to grow outwards leaving the centre nice and airy and finally you prune to encourage new healthy growth but if in doubt just cut each branch  to within five inches of the ground   … the only thing I would say is important is no matter what the plant is cut always just above a new bud .

Of course there is nothing wrong with making a big deal out of pruning , agonizing over it and making a science of it .. if that is your thing  … grand …  I just don’t have the time to do it especially when the results are the same anyway .

There was a time when I was starting out in gardening that doing things according to the book especially pruning was my thing but just like cooking  and with experience eventually you find confidence and end up cooking with what is available .

My pruning year starts in mid February when I start on the willows and I cut back any branch the thickness of my thumb … I remove about a third of the cornus branches on each plant  in March so that every three years you have cut back the entire plant ensuring vibrant young growth each year which gives you the best bark colour the following winter .

A plant that really benefits from an annual cut back is eucalyptus as hard pruning gives new young growth which is startling green with small leaves called juvenile growth otherwise eucalyptus left alone will climb into the sky and the leaves become long and dirty grey . With all new eucalyptus I cut the leading spur back about a foot at planting and every year I reduce the height by about a third otherwise you lose control of the tree but even if this happens you can still cut it back with a saw and it will spring into growth again lower down but I prefer not to leave it go that far as the result will look a bit hacked and better in my experience to prune every year in February/March .

I carry a secateurs with me every time I am in the garden and I constantly tweak branches throughout the growing season whenever I see they need it and you can always try your look with slips …. any cutting about a foot long and the thickness of a pencil will do if taken between November to March , remove all but the top two leaves and stick the other end about a third of the way into the ground , not scientific I know and pretty haphazard but about half root for me and you can transplant the following year to a better location if necessary .

As you can see no special treatment and again gardening books and articles tend to make a big deal about taking cuttings as they do with pruning which is off putting for beginners … and as for so called “ green fingers ” with cuttings that some people are supposed to have , I do not have a specially created bed  with any special mixture of grit , soil and compost , do not add rooting powder and generally stick in the cutting where I eventually hope the plant will grow and as Joan Collins who is in her 80’s said recently when asked about her new partner’s age who is 40 years younger and whether she worries about the age difference … if he dies he dies !

I had to replace a favourite pot this week which I had bought at the Kiltrea Pottery Easter Sale in Enniscorthy some years ago and which has housed a large hosta sibildiana elegans for the past four years . A slight crack had developed in the pot last winter and a combination of the recent hard frost  and the large roots of the hosta finished it off this week and my photo shows just how root balled a container can become over a short period . The solution is every two years to  remove the plant and repot either in a bigger container or split the plant but hostas can be difficult to extract from a pot without damaging the pot itself and that’s what happened here as I had left it too late to dig out the hosta but even still I was shocked at just how much of a root ball there was . 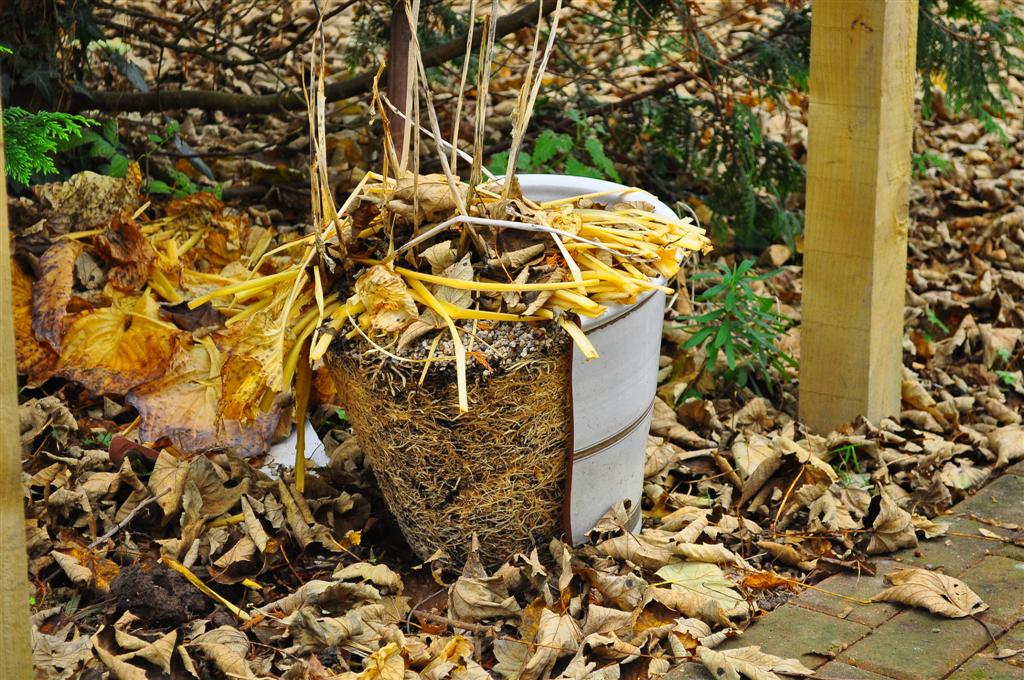 My beautiful Kiltrea Pot and a killer hosta !

This pot with this particular hosta , one of the big grey leaved sibildiana , is a favourite of mine and grows about a metre in diameter and has a real wow factor as it is positioned under the entrance pergola to the garden where every visitor see it . I grow it in the shade of a sambucus nigra and the two colours, the deep purple of the sambucus with the grey leaf of the hosta , complement each other   … I water it every day in dry weather throughout the summer and I feed it once a week with a liquid tomato fertilizer .. I don’t normally believe in cosseting plants to this degree but as it is close to the house there is no major effort required and the results are magnificent . 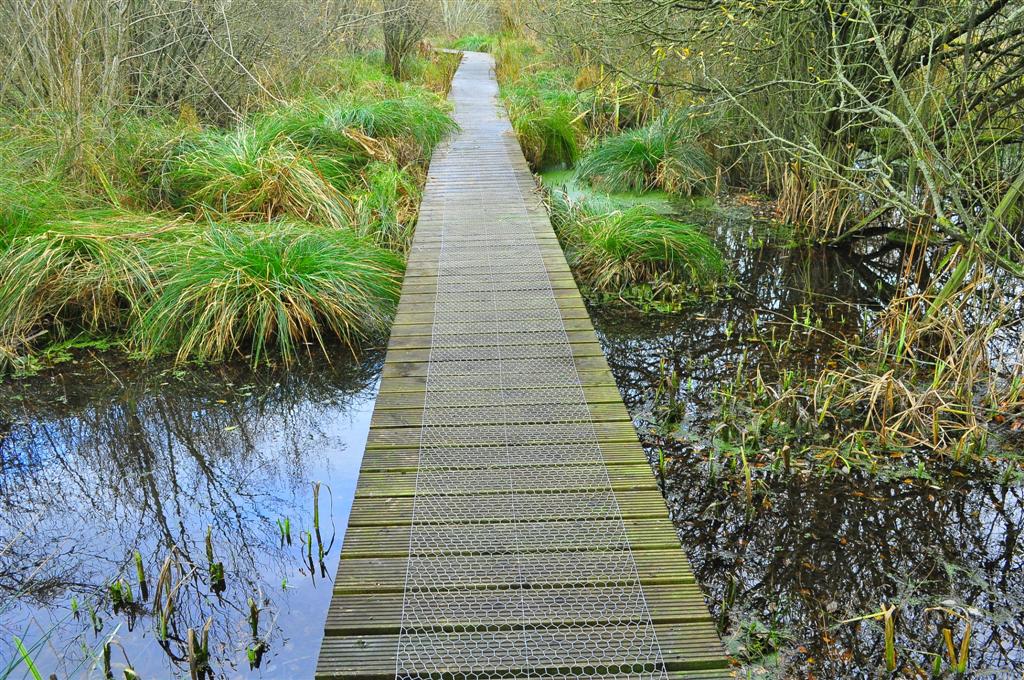 Safe now in a all weathers December 6th 2013 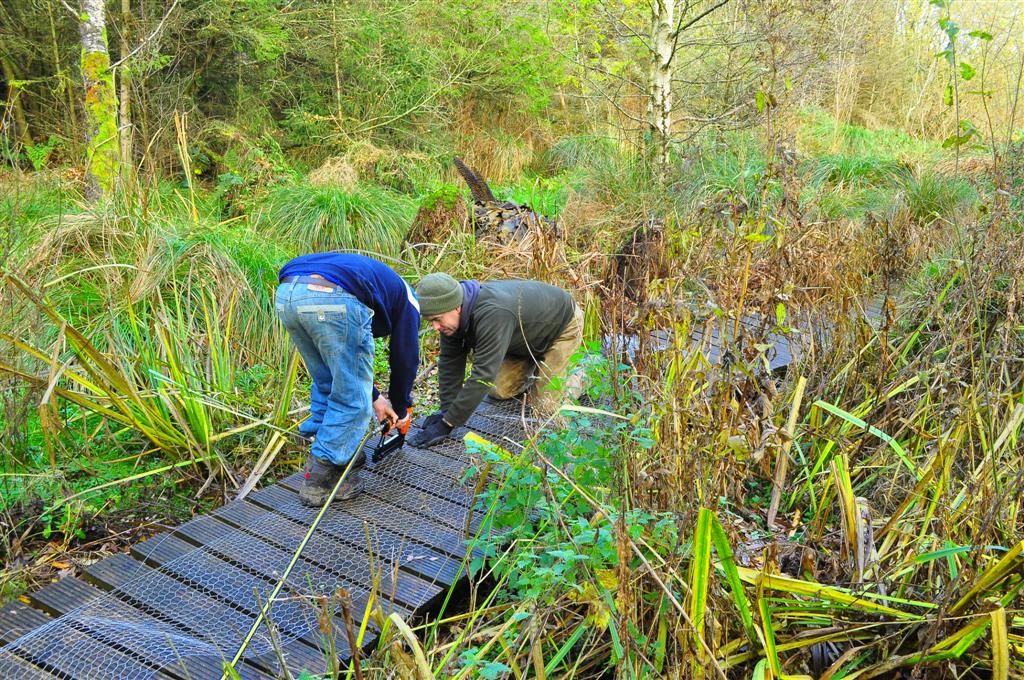 This makes them safer to walk on in wet weather as in irish conditions wooden decking can be treacherous …. lovely to look at but treacherous  . Peter Cullen did his usual neat work and had his son , Christian as a helper , the next generation of Longfield Landscapes ! 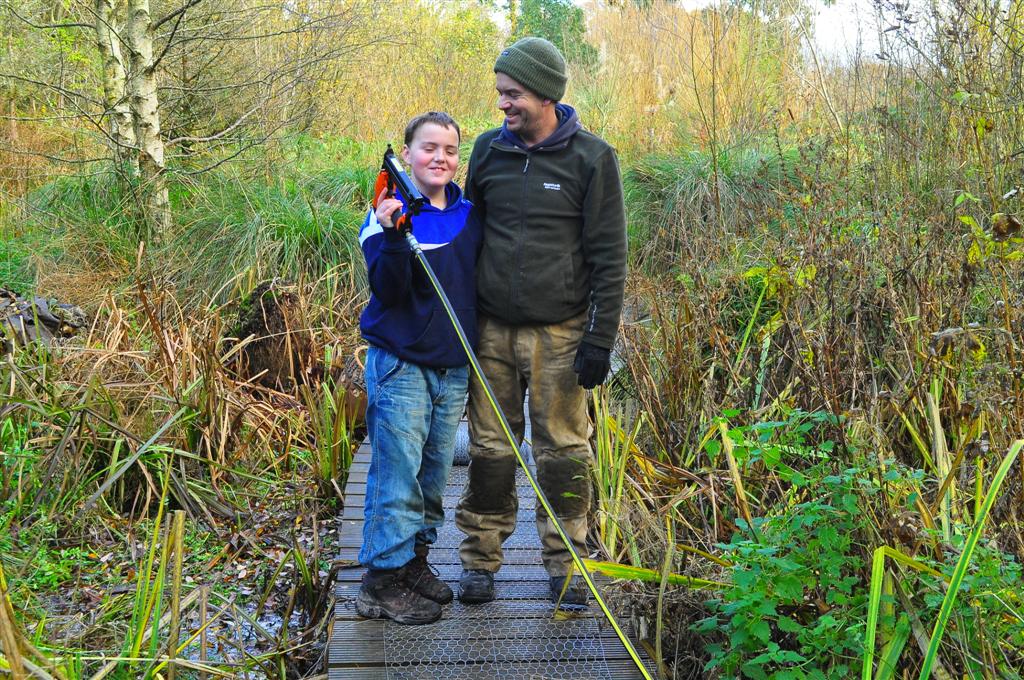 I am almost finished planting up the new bed and this week I planted three climbing roses variety rosa banksias at intervals of ten metres apart , training  them against 2 metre poles at the back of the bed to give structure . This particular variety is a thornless rose which has green / golden foliage which it retains for most of the year so will be a feature in all seasons  , white flowers in June but as with most ramblers will flower only once but a marvelous show for about three weeks …. I know I have said many times before that flowers are not my thing and this rose has been planted for its foliage and the flowers are just a bonus ………. thornless is an important feature as normally climbing roses have vicious thorns that will tear you to pieces if not careful when working around them  and I have one climber called rambling rector which is positively unchristian if you go close and the only safe way to prune it is with a hedge cutter at the end of a three metre extension pole ! 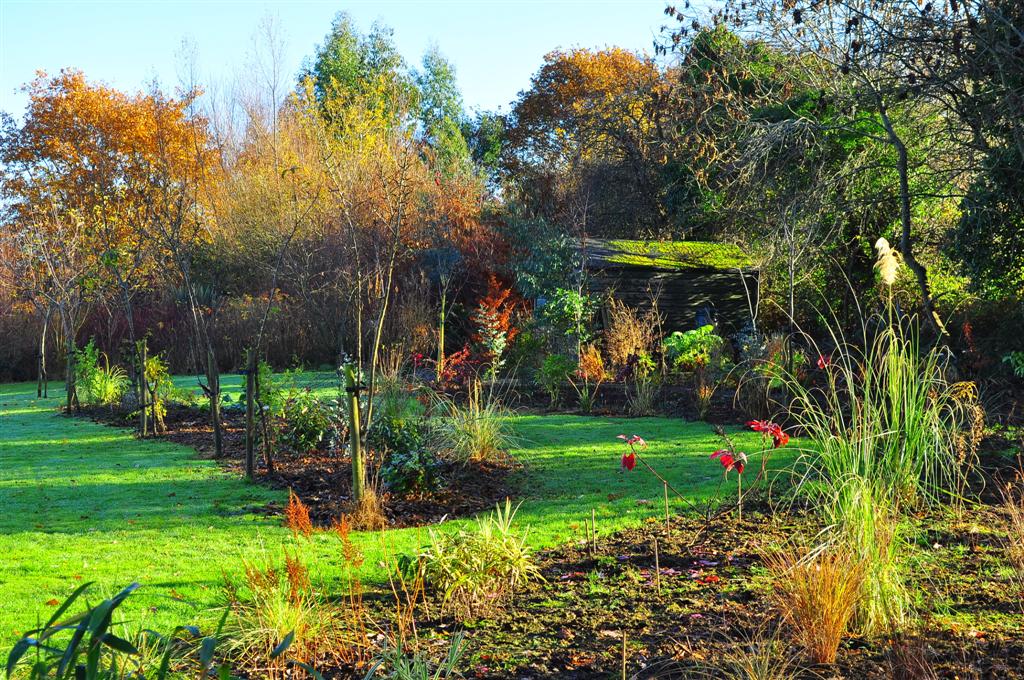 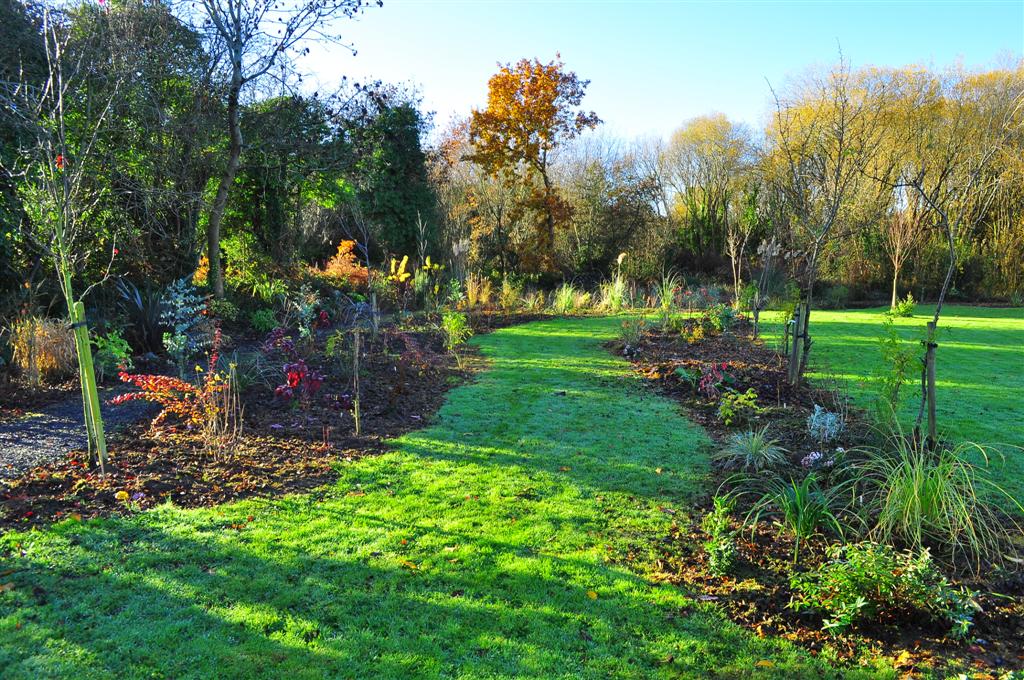 The new border bed is getting full up now but I had left the central area free as I haven’t quite decided what would be the lead plant there , a mid height shrub or small tree was necessary to give some structure but bearing in mind my deer friends I was nervous to try again with a specimen small tree such as a Japanese  acer  or a mid height grafted salix purpurea  . I had known for some time that , a cornus variegate controverta better known as the layer cake tree which has been doing well for me in the front garden had been  planted  in the wrong location at the front of a bed of cornus elegantissimus where it looked nothing as the similar leaf elegantissimus  dominated it as they both have the same leaf colour  and it would be a few years until it grew taller and came into its own as one of the finest small trees of any garden …. I had planted it there last year as I was nervous that the deer would eat it in the lower garden  but  two days ago bit the bullet ( as will the deer If they touch it )  and replanted it in the front of the new bed and while I am still nervous about the deer grabbing it but what to do and if it survives it will be a knock out in the new location in a few years .

One old gardener’s tale is that deer don’t like the smell of male pee so the newly planted cornus variegata … how shall I put this delicately …. is getting a regular soaking … this is one gardener who does whatever it takes for his plants !

Finally one last photo from a beautiful early December morning . 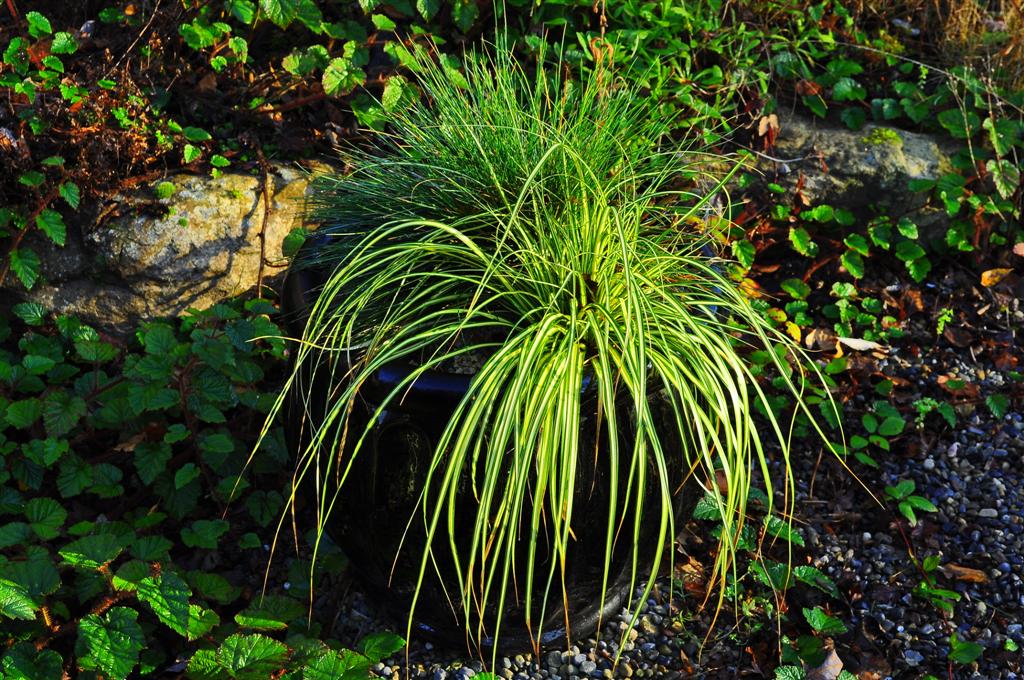