I always feel the garden is dreary in December , the old leaves are still hanging on the trees and clogging up the ground and while normally I would be on top of this with the leaf blower however this December I am on crutches for a few weeks recovering from a hip problem so am more conscious of not being able to actually do a clean up … depressing ! 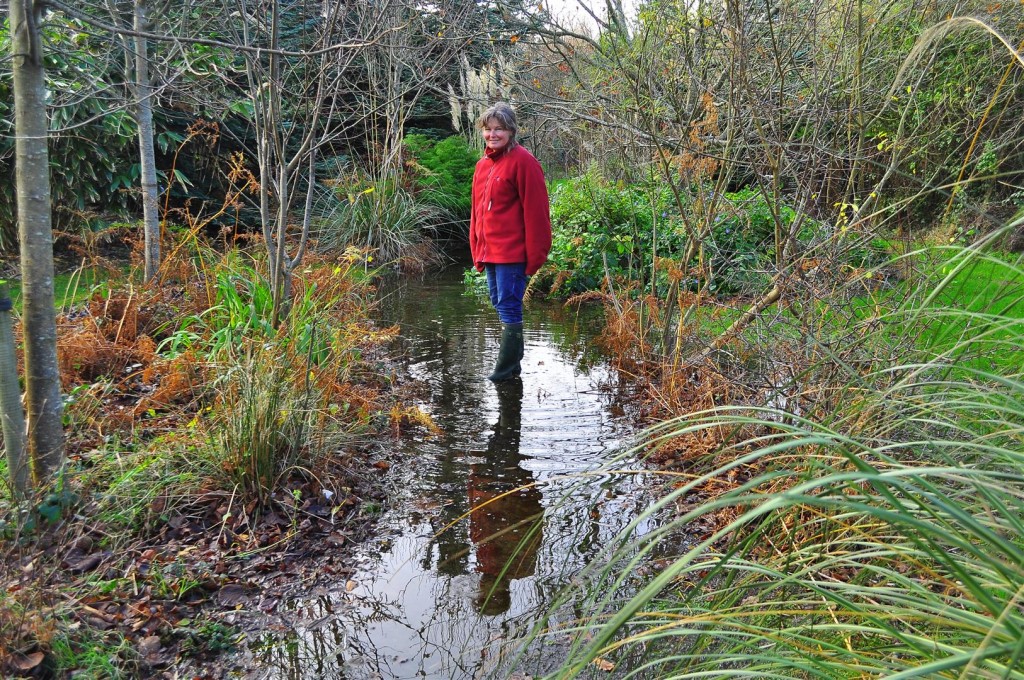 December in Ireland has been full of unusual rain , heavy persistent H2 O bucketing down on a daily basis and the poor people in the west of the country have had an almost biblical Noah’s Ark flooding . Here in the south we have been luckier but heavy areas are showing signs of flooding and the lower part of the garden is out of bounds at the moment with the normal run off drains full and spilling out on the paths not to mention the natural run off of water from the mountains which come out on to the laneway …. short term a periodic flooding doesen’t do the garden any harm and most trees and shrubs will come through unscathed .

I had all October to plan for this lay off so the garden is in reasonable shape , plants  divided , grass cut , pruning and I generally put the garden to bed early still I find it frustrating not to be able to tinker away on a daily basis as is normal for me .

The new patio area which I planted up last month with ground cover perennials to overlap and soften the edges of the paving is coming along nicely and although growth has stopped for the winter it looks like all the cuttings and divisions took . The path into the area is flanked by two clumps of arundo donax , the giant reed , which are over three metres high and these formed a nice entrance however as the foliage faded I decided that the entrance needed to be more formally defined even though the dried reeds still look good and asked Peter to build a wooden pergola …. we always use larch here , hard wearing and fades to a nice silver look ……. at the moment I am thinking virginia creeper as suitable climbers but as the planting time comes around I am sure the odd wisteria will find it’s way into the mix ! 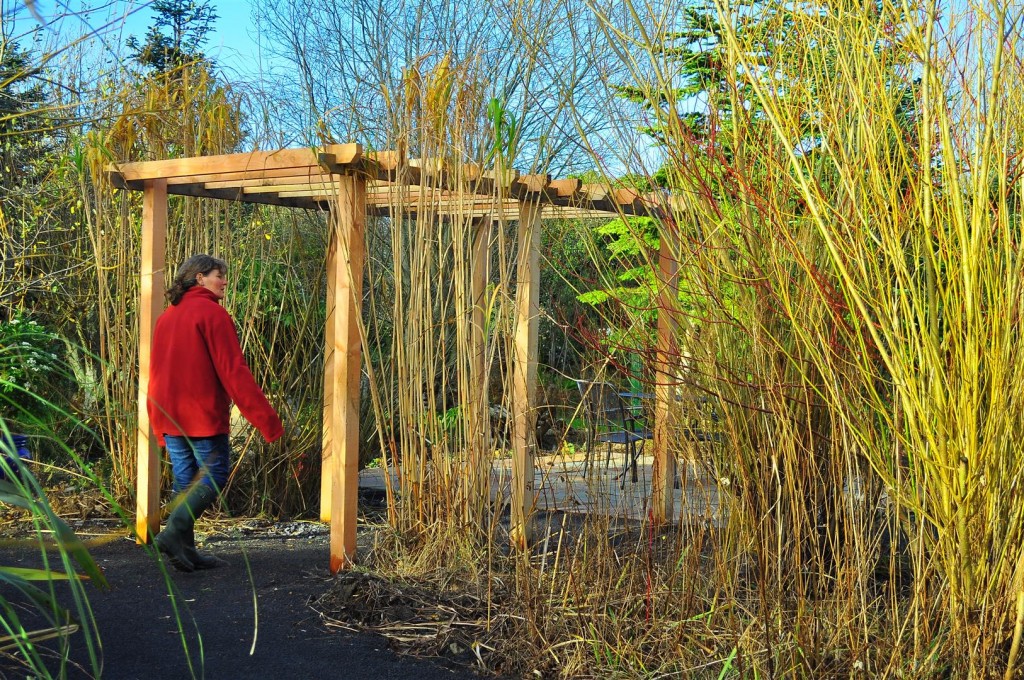 As we are at the end 2015 it is time to look back over the gardening year highlights  and we started in January with the ugliest pot I ever saw , totally out of place in this garden …. but Snezana fell in love with it in Glenconnor Garden Centre … in the end after much searching I found a corner of the front garden where it would do the least damage aesthetically speaking !! 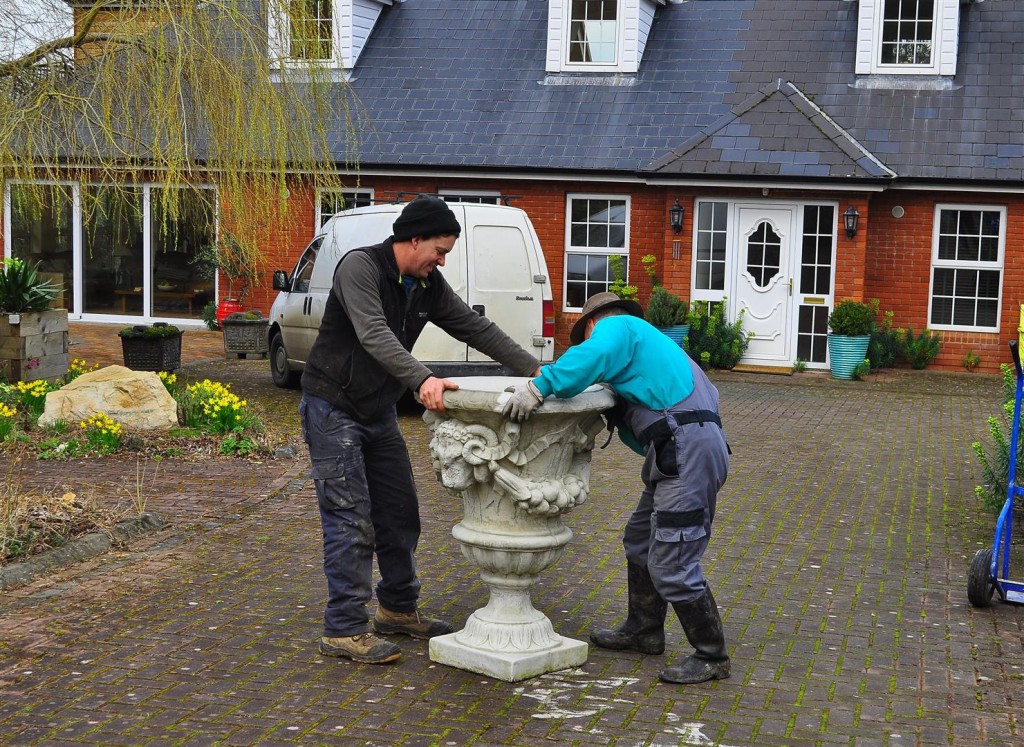 Peter & Sebastian struggle with the pot that taste forgot ! January 2015

Also in January I cleared an area of brambles in the lower field and reclaimed in the process a 400 square metres patch of ground , added some steps linking both sides , a pergola suggested itself  and the result  created something out of nothing in a previously unused and unloved patch . 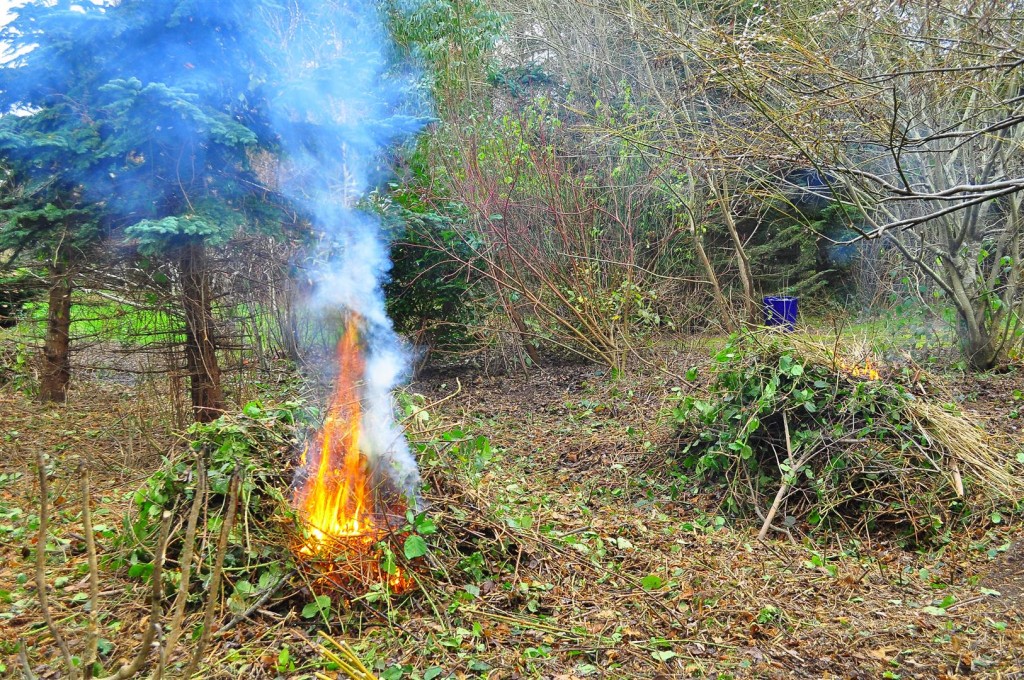 And how it looked after the clearance May 2015 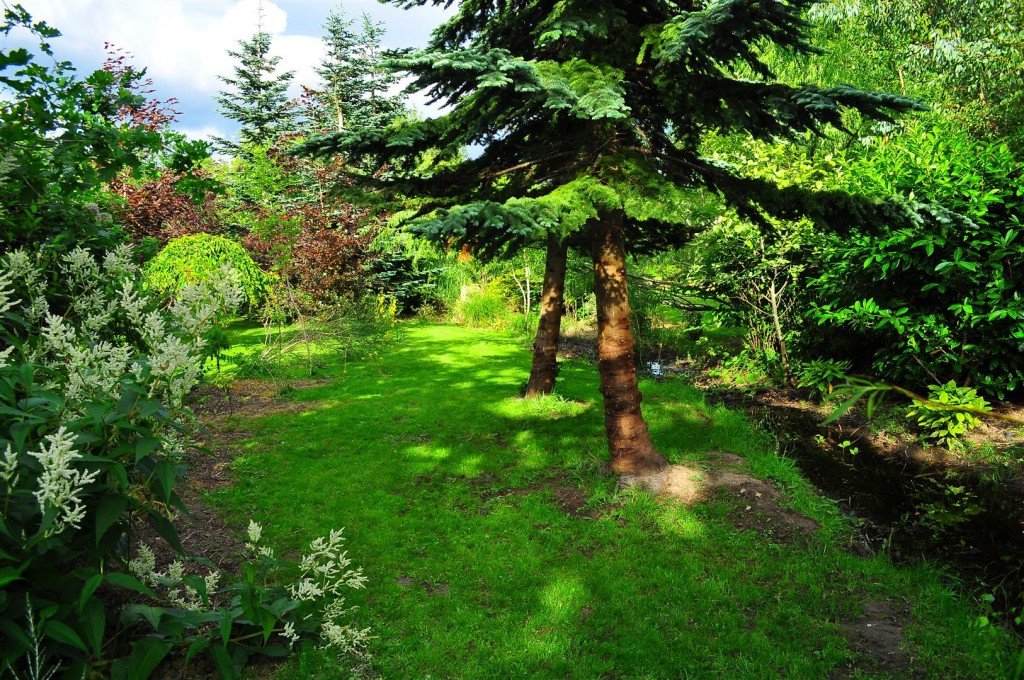 The new pergola  and steps finished the design 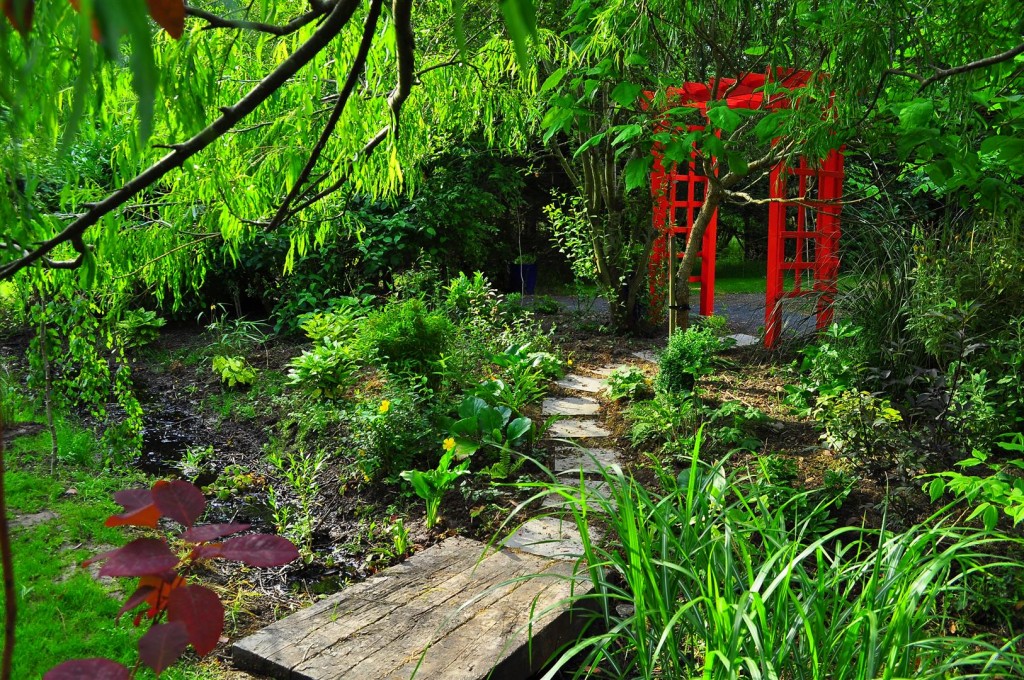 May 2015 was bite the bullet time as I finally tackled the top field and added two new paths which at last gave a designed feel to that area … a messy job to cut out the paths and squeaky bum time as until the end of the project I wasen’t sure it would work ! 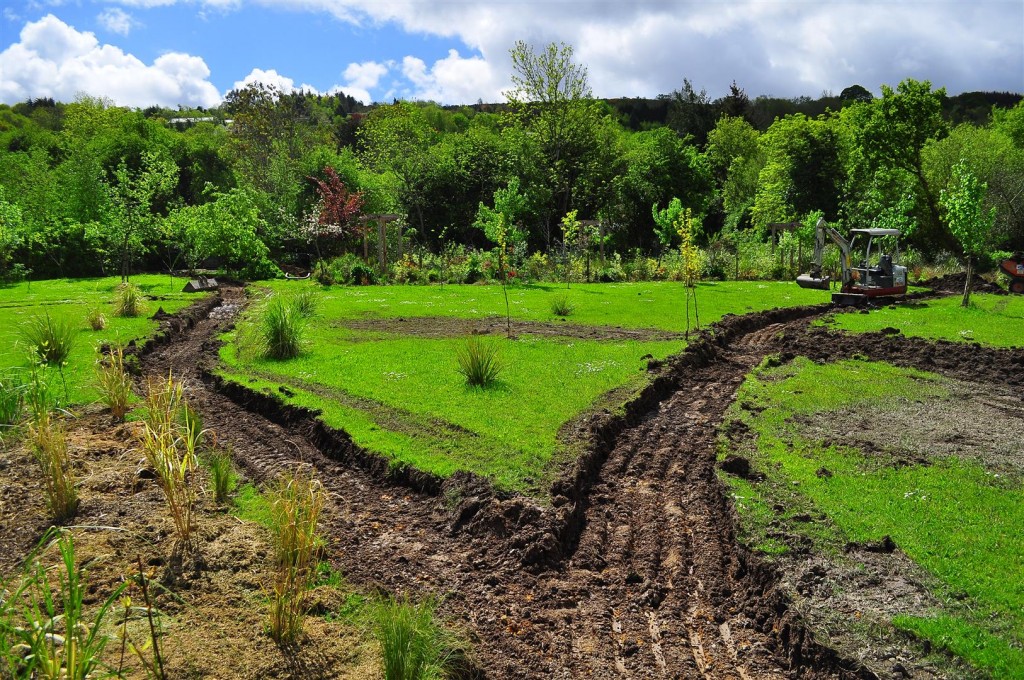 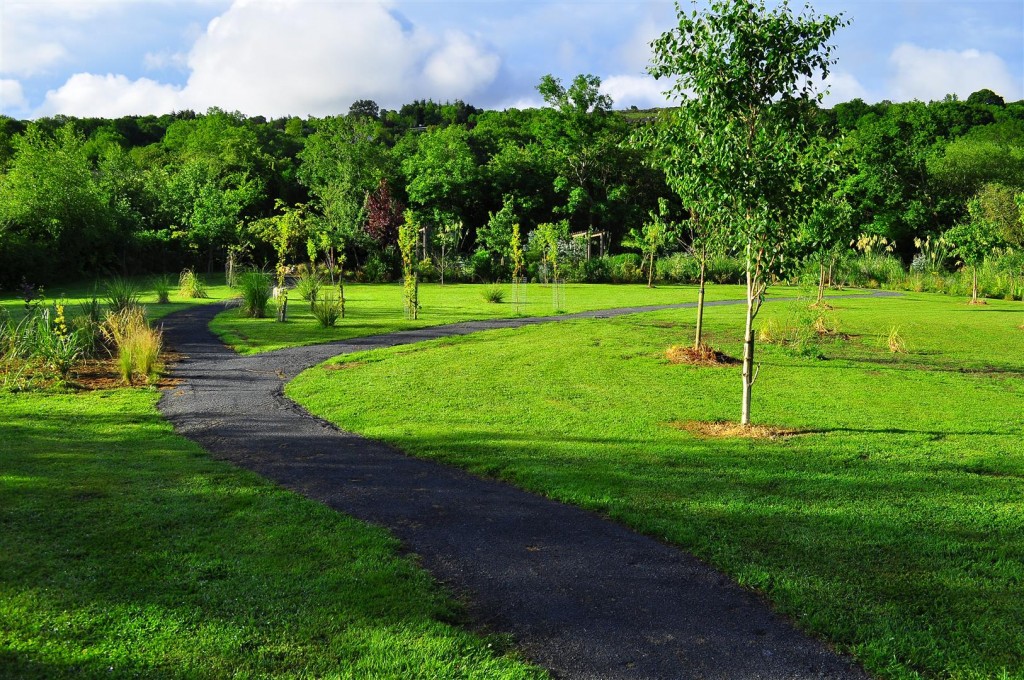 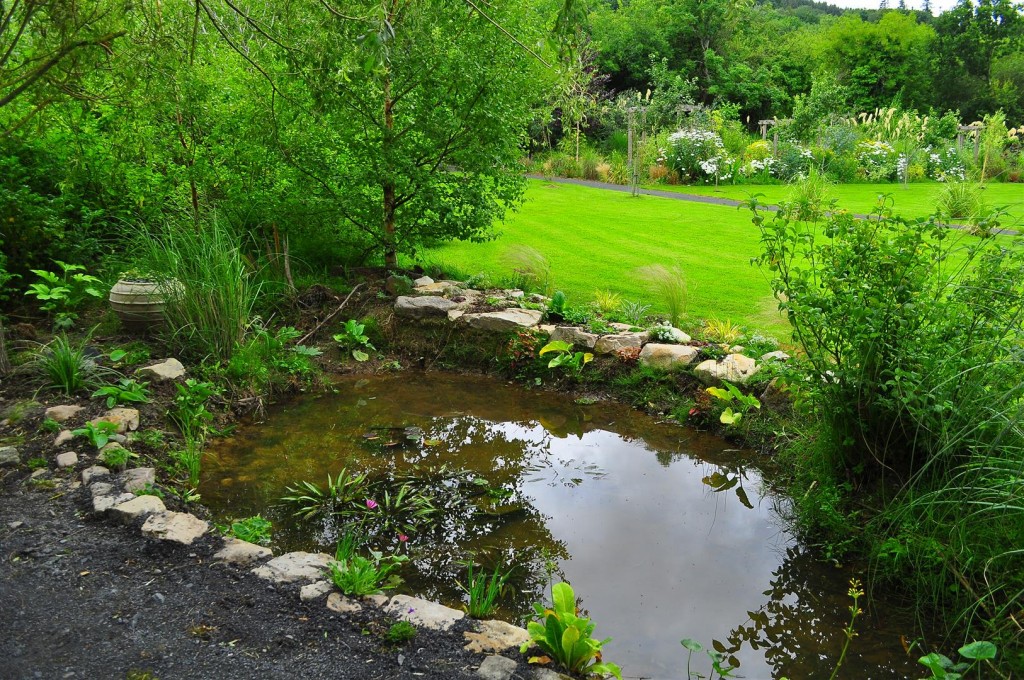 In July great excitement as The Irish Gardener magazine sent Shirley Lannigan to write the feature on Petrovska Garden that was published over six pages in the September 2015 issue . 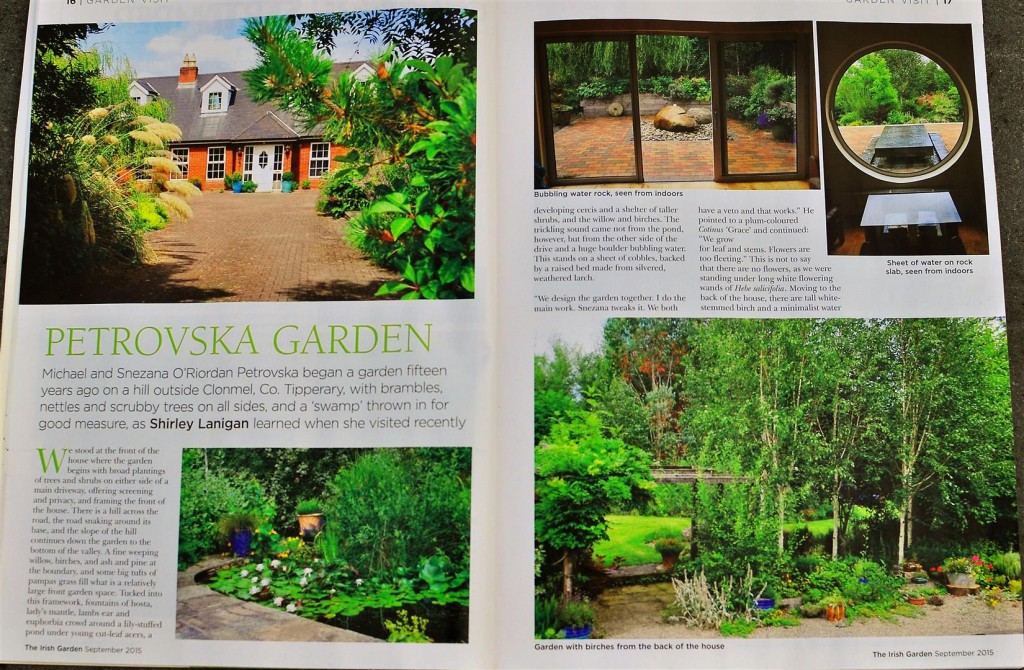 September 2015 issue of the Irish Gardener

In late August I tackled the last great patch of brambles remaining in the garden which eventually in November saw the construction of a new patio and pergola  in the lower field  . 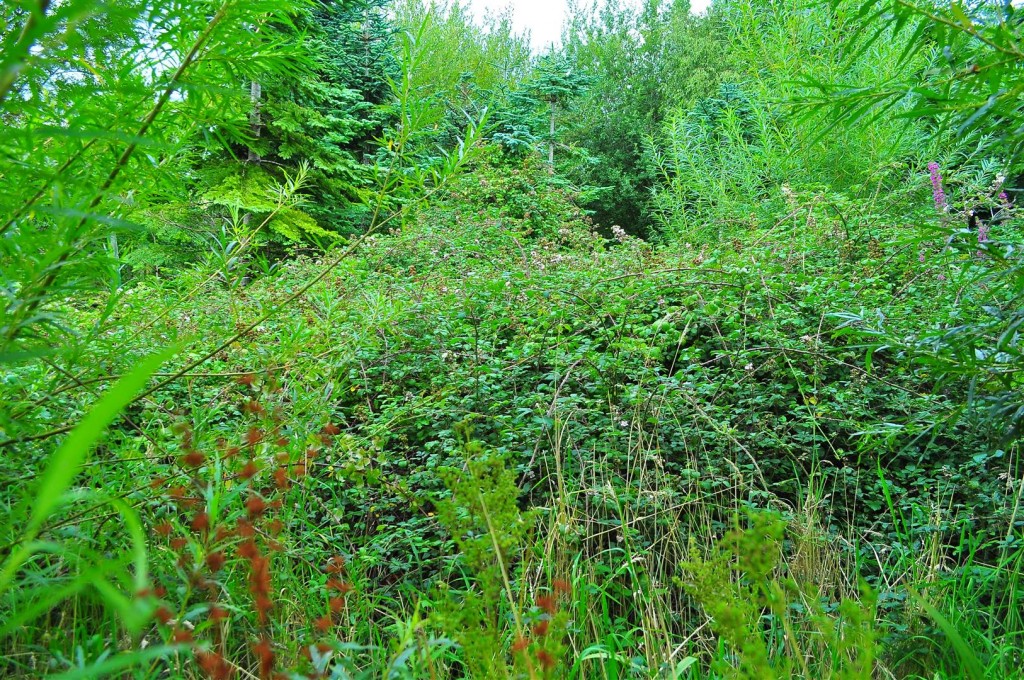 How it looked in November 2015 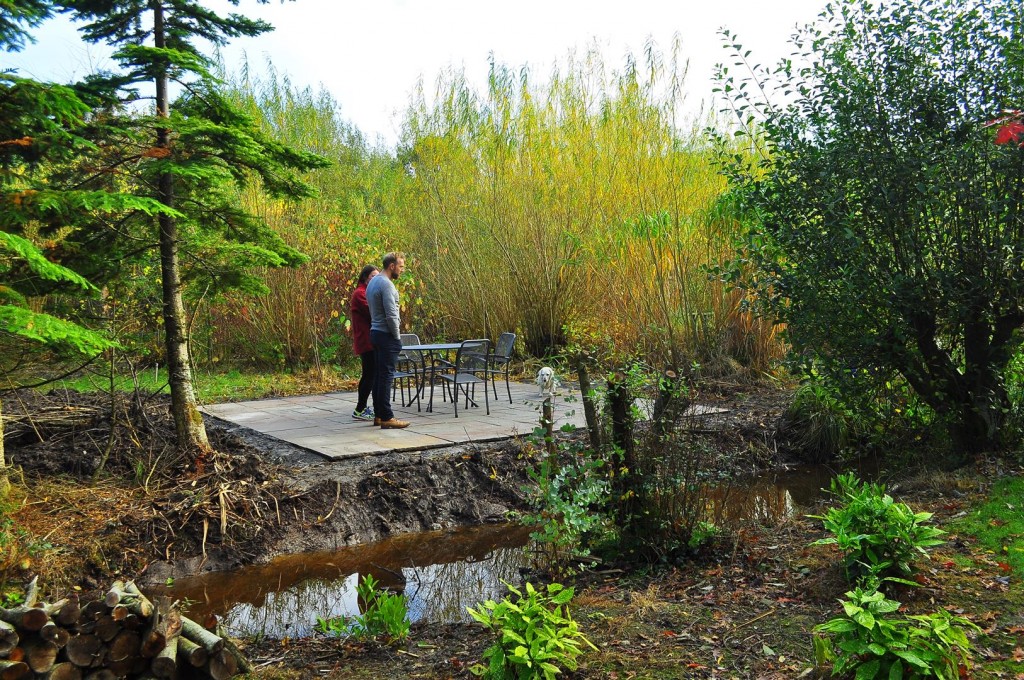 In September the Munster Interior magazine asked me to write a 500 word article on the garden and supply twelve photographs to illustrate a four page feature in their October 2015 issue . 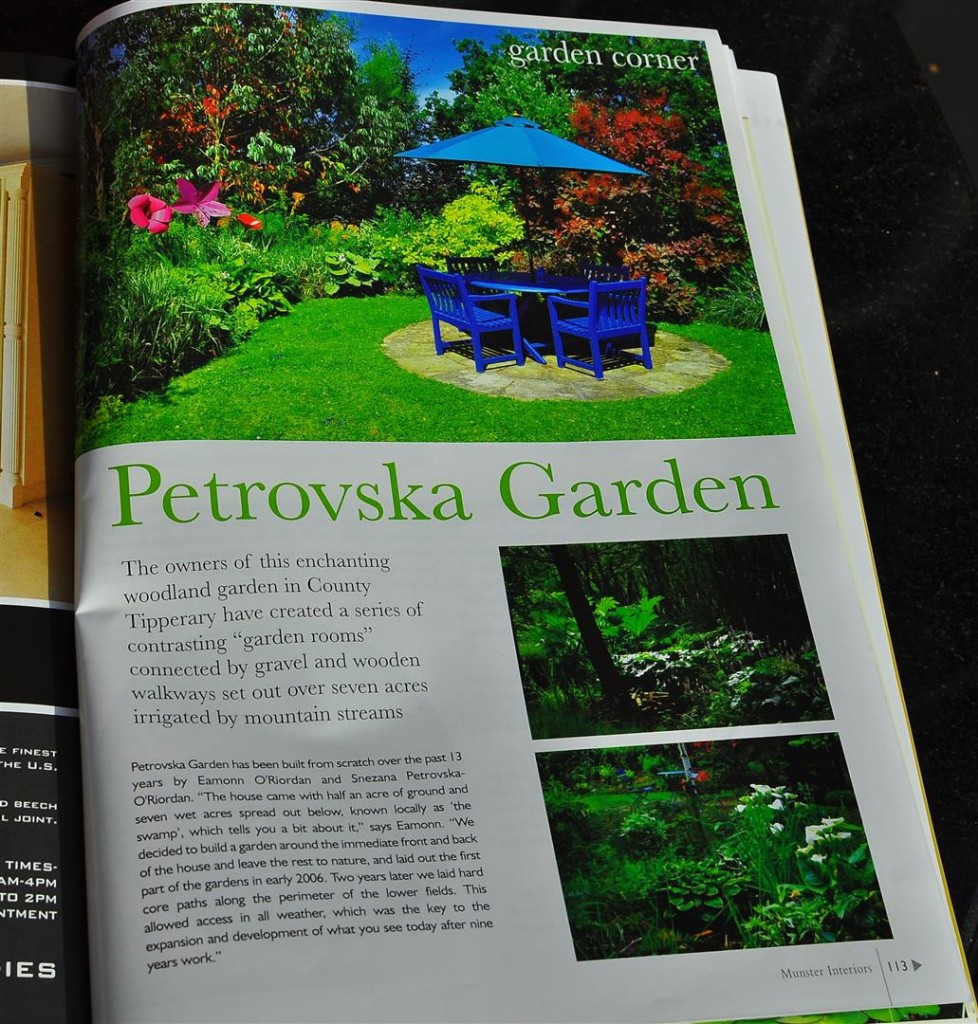 The Clonmel Nationalist weekly newspaper ran a feature on the garden and yours truly in their December issue . 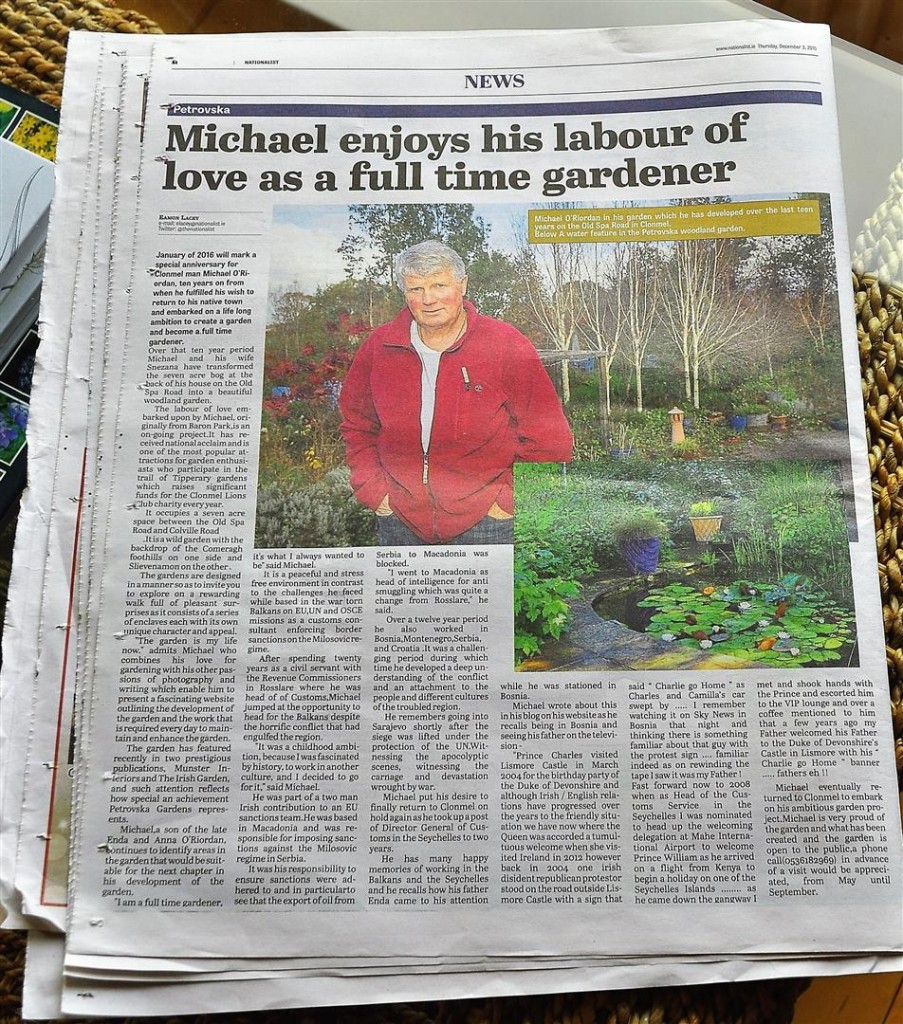 Visitors to the garden increased in 2015 and quite a few gardening groups visited , most notably the Royal Horticultural Society of Ireland in June 2015 and we held a very successful annual open garden weekend for the Clonmel Lion’s Club Club charity . 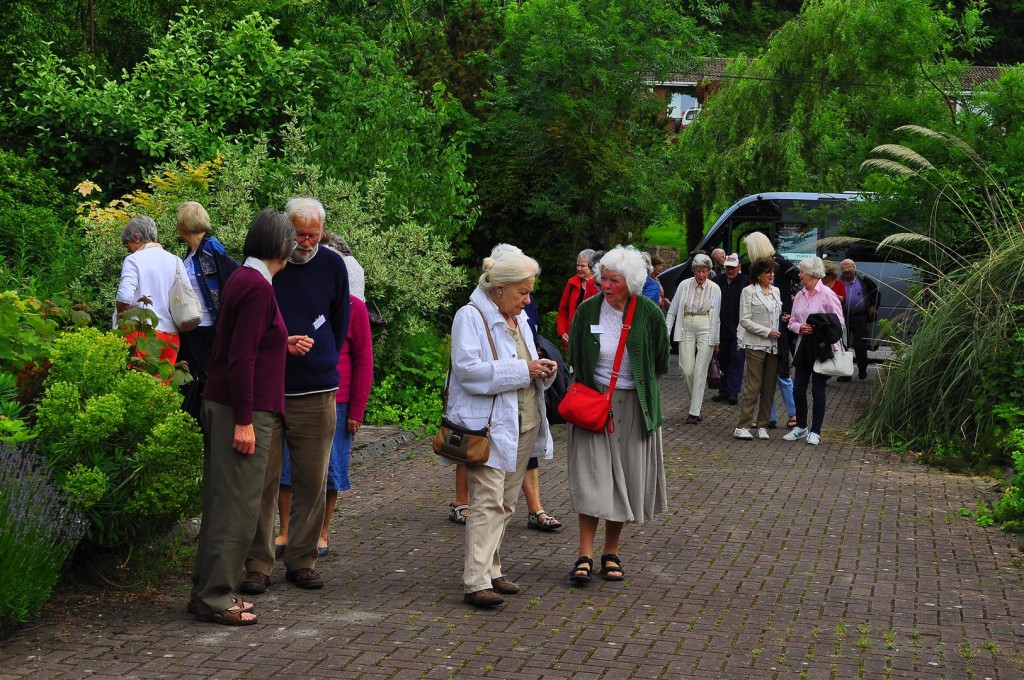 Visit of the Royal Horticultural Society of Ireland , June 2015 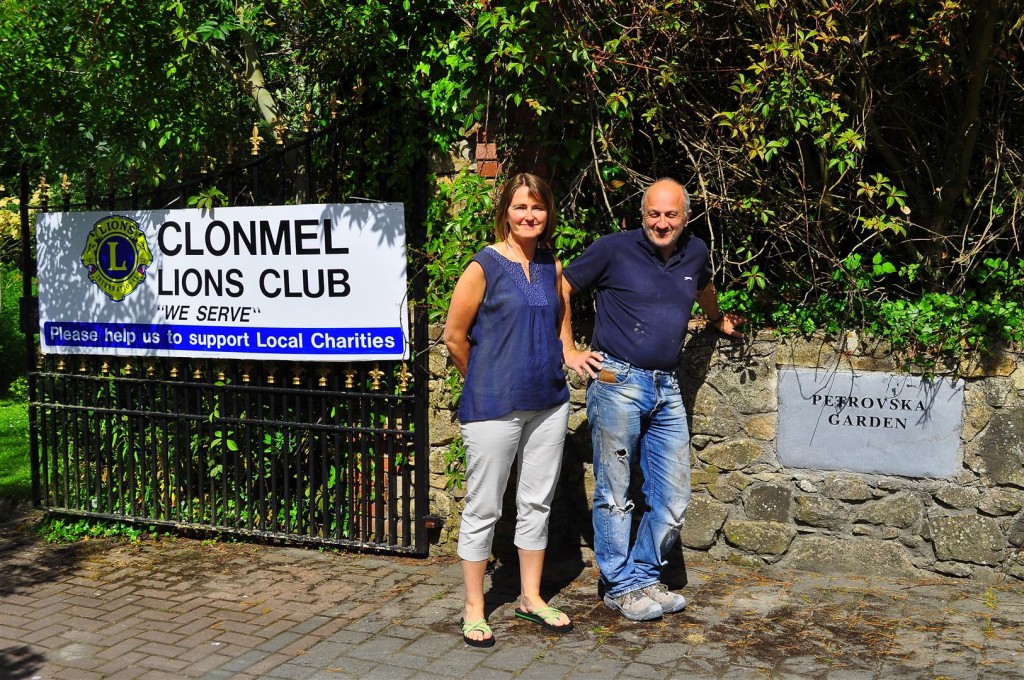 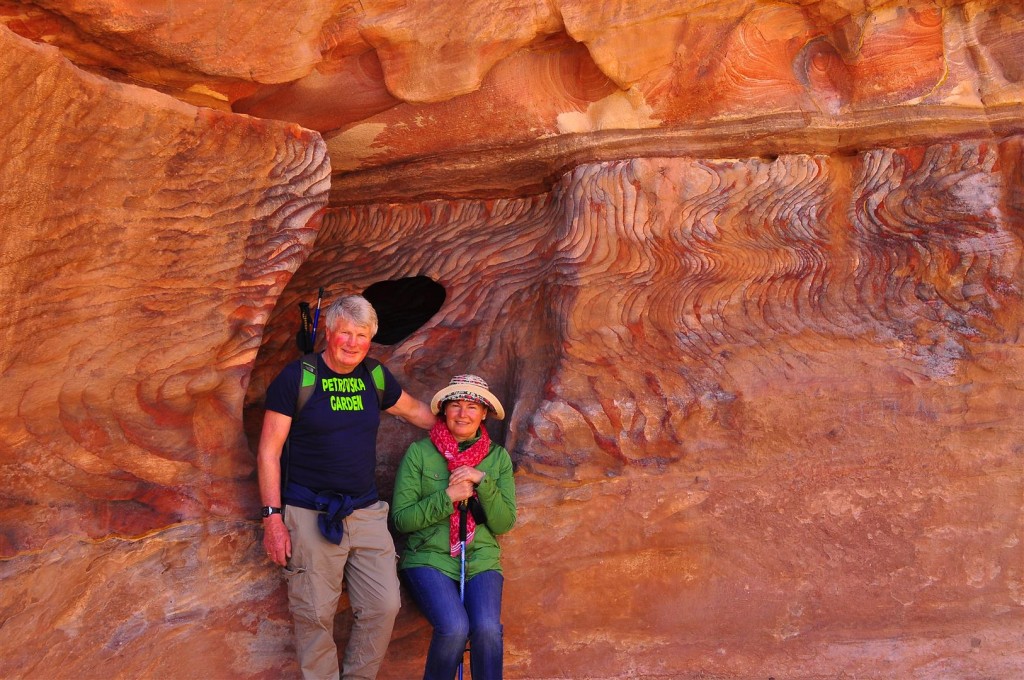 Carrying the flag for Petrovska Garden at Petra in Jordan , March 2015 !

Finally to all our visitors and friends both Snezana and I wish you a very Happy New Year 2016 !