The planting area in the new patio in the Lower Garden is thickening up nicely since I started it last February and although the soil is not great I am picking plants that don’t need pampering and don’t mind stony soil . Mostly the plants are self seeders transplanted from other parts of the garden , bergenias , alchemis molis , ground cover geraniums and lots of vinca dug out in Spring , both the green and the variegated type and of course the main work was in hands and knees work ,weeding the area from the beginning by hand to allow the new plants a good start and now that they have formed a good canopy the need to weed constantly is gone as the new plants are smothering them . 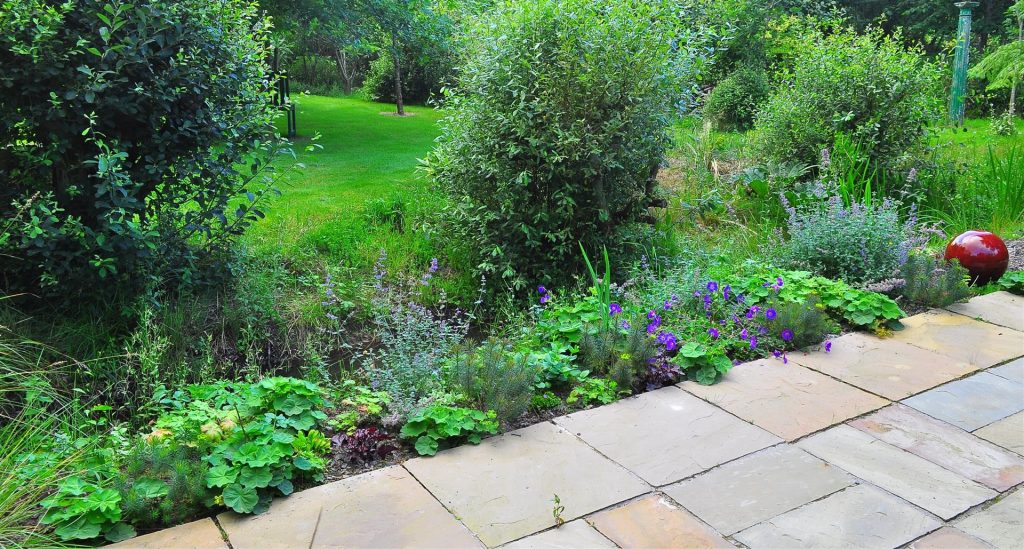 The whole patio area has been a success as it is a lovely relaxing place to sit and very sheltered with sun all day … I had hoped to lawn the area behind but the ground there proved too wet to get a digger in so I strim it regularly . 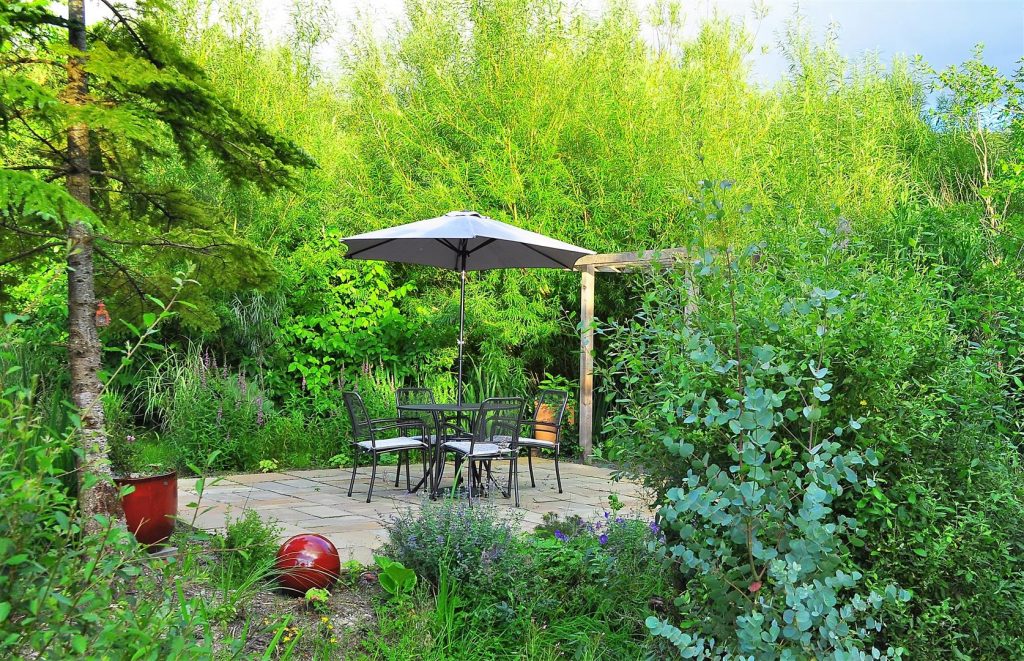 The patio one year old August 2016

The Clonmel Camera Club visited a few weeks ago and the garden was never photographed as much … all came with serious intent loaded with cameras , tripods , all sorts of lenses and one could say the hills  were alive to the sound of Canons and Nikons !

An interesting garden visit for me as normally visitors ask questions relating to trees and shrubs but here the talk was all about  digital versus print ,    no contest in my opinion digital is way better , camera equipment , F stops and shutter speeds and as a camera enthusiast myself I enjoyed talking about the light at various times of the day and where the best photo opportunities were to be found … I look forward to seeing some of the photos as it is always interesting to see someone else’s take on the garden . 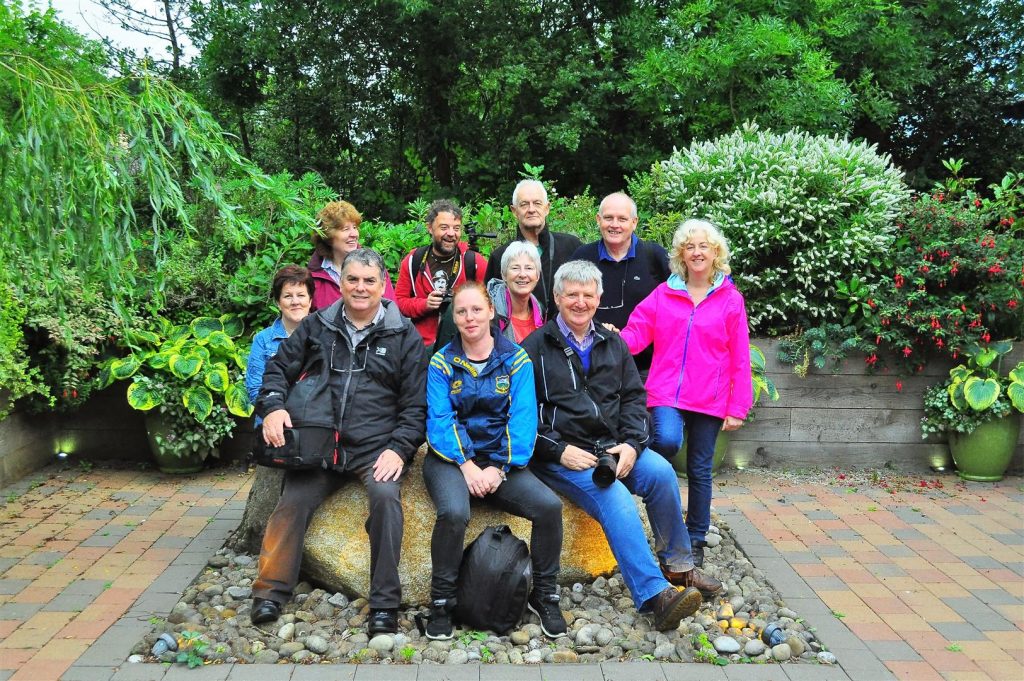 Normally with Garden Clubs it is usually 98 % female with the odd male tagging along in the wake but with the Camera Club  it was 50/50 men and women and all the better for that as I feel too long have we men allowed gardens to be the almost exclusive preserve of women !

Visitors to the garden often ask what plants do best here or why I don’t grow certain plants and I explain that there is a range of soil types here , dry conditions at the immediate front and rear areas close to the house as all this soil was brought in to level up the site in the beginning twelve years ago wheras the rest of the garden has wettish soil due to all the springs in the area and as a result of this I follow the principle of Right Plant Right Place with a selection of planting that likes these soil conditions .

Occaisionally I break these rules and sometimes even get away with it but generally I suit the plants needs which is where gardening experience kicks in but even following all the rules sometimes a tree , plant or shrub just won’ t grow and in such cases you need to be brutal after a year and move the plant to another location where inexplicably the plant may thrive and in such cases it is not green fingers that does it but just luck that you have moved the plant from perhaps a windy , wet or frost pocket into what is the Right Place for that specimen !

Last year I had great success with a persicaria polymorpho which previously had been hidden behind brambles and not appreciated and after cleaning away the brambles suddenly it flowered for almost the entire summer so naturally this year I was looking forward to another thrilling display but nada , almost no flowers but what I didn’t mention was that last winter I wanted more of the same spectacular blooming in different locations so I split the clump and got two smaller clumps which I planted up in the same soil conditions and all three new clumps thrived and grew into fine specimens but none flowered and then reading up about it I discovered persicaria polymorpho resents being dug up and won’t flower the next season  … in other words a gigantic sulk ! 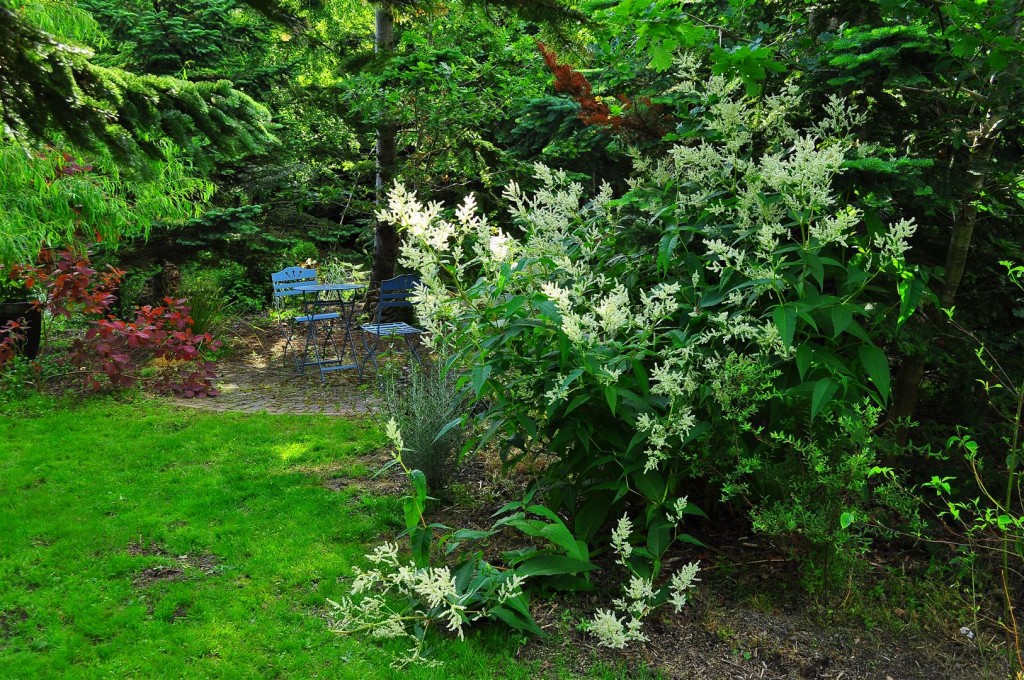 And staying with the topic of plant problems that supreme water alien, parrot feather, is back again in the Lower Swamp area even though in April I gave it a thorough cleaning  I still spent a morning this week hauling out wheel barrow loads … the word alien is used I gardening terms to describe a plant brought into a country that it is not native to and which has the ability to multiply aggressively into the new environment such as Japanese Knotweed and Parrot Feather . Basically no matter how well you control these aliens you can never really eradicate them and you need to be constantly vigilant in rooting them out and while I easily control Parrot Feather now by raking it out on a regular basis if left alone it would take over again in a few years . 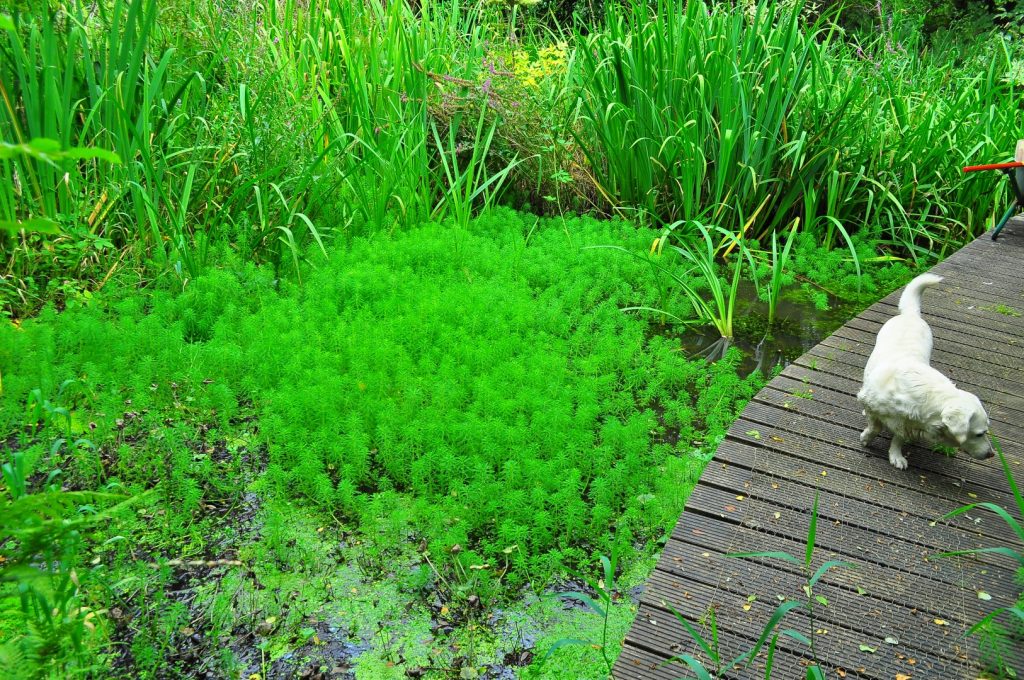 The dreaded Parrot Feather in the lower Water Garden August 30th 2016 .. it looks great but don’t ever plant it !

By repeated spraying of round up over four years I finally managed to eradicate it from the deep swamp area a few years ago but a few pieces survive near the edges where thankfully I can get in on a shelf about a metre wide and hook it out on a regular basis but it is a dangerous business as a step the wrong way can drop into a swamp deep enough to take a bus so I stay well clear and when building the original wooden walkway six years ago we had to use telegraph poles as supports it was so deep ! 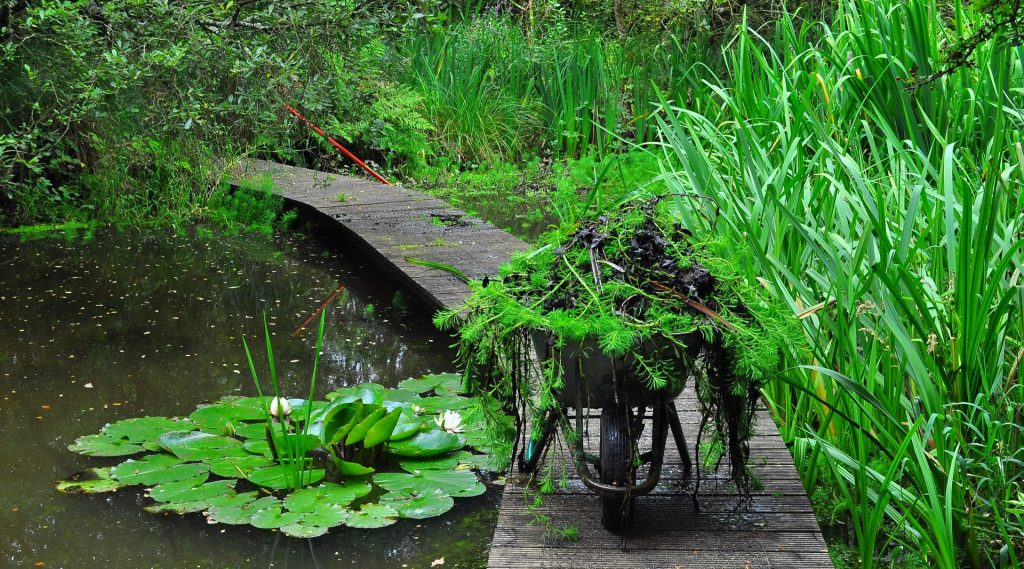 Ten barrow loads later I have temporarily eradicated parrot feather in the swamp area for another few months !

I was in Kilkenny last week to visit the Architectural Salvage yard and picked up two antique items which I was delighted with , a stone chimney top such as you see in Cappadocia in Turkey with the houses built into the rock but most likely this originally came from the South of France where there is also a tradition of rock houses … it has fitted immediately into the rock garden as it resembles a Chinese lantern . 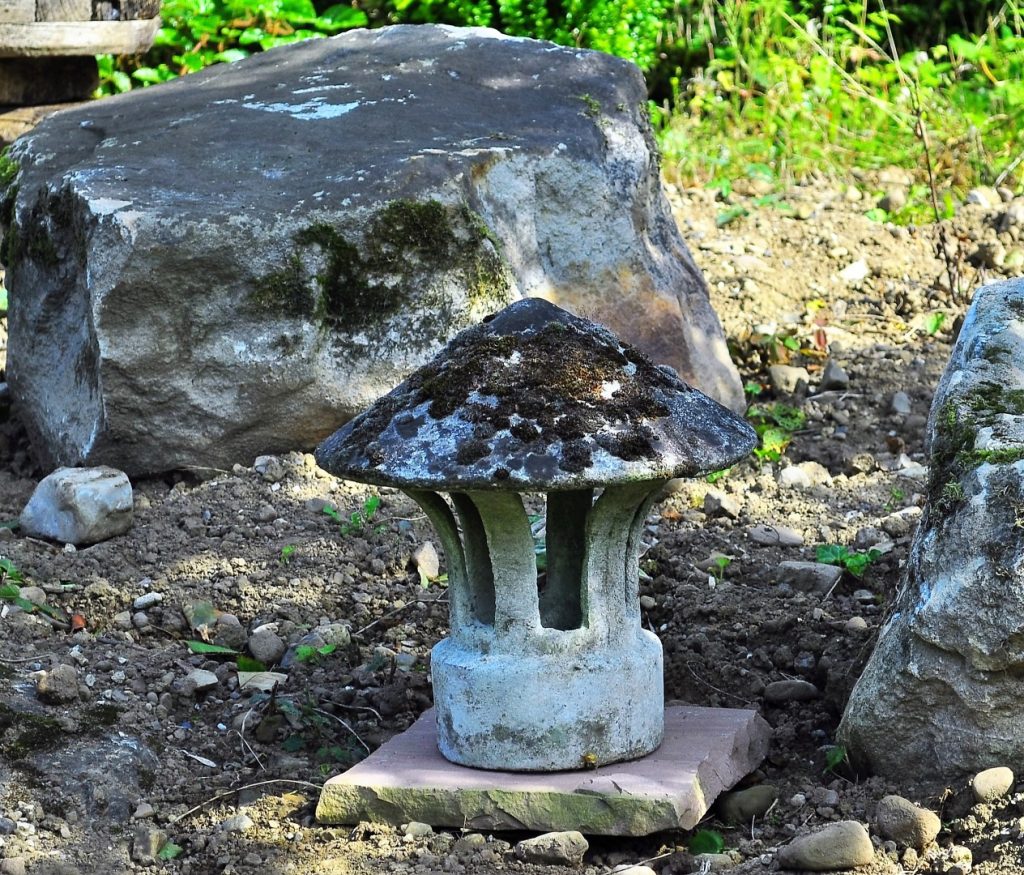 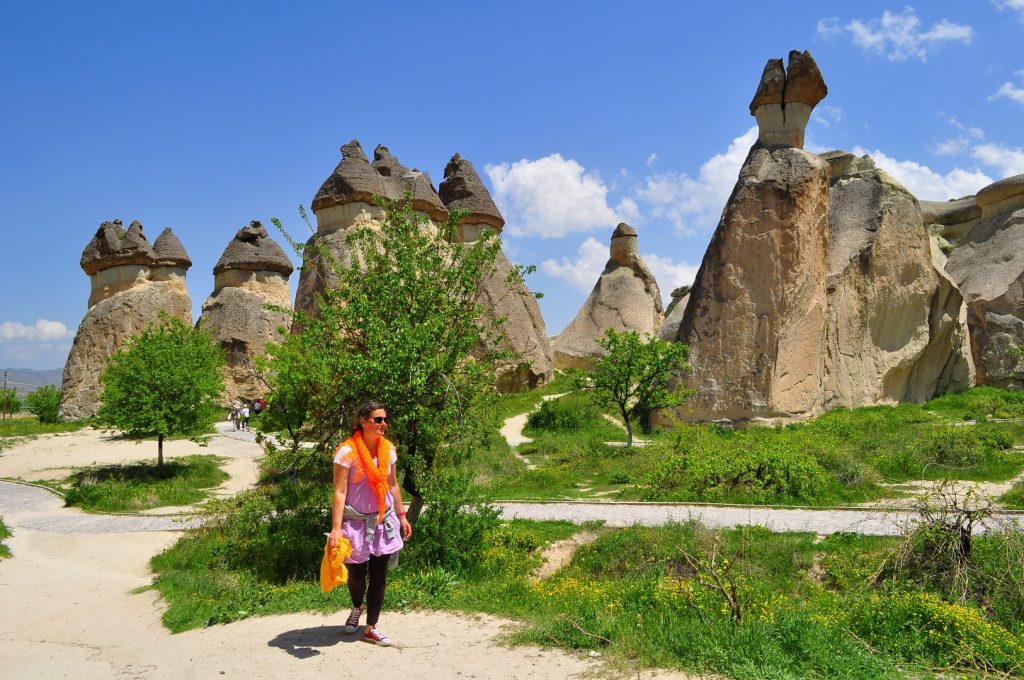 The second item is an old iron cannon ball which is still partially embedded in stone masonry and the provenance is that this was fired from an English Man of War navy ship over 350 years ago at Wexford Port and sold by a diver who recently picked it off the sea bed in Co. Wexford . 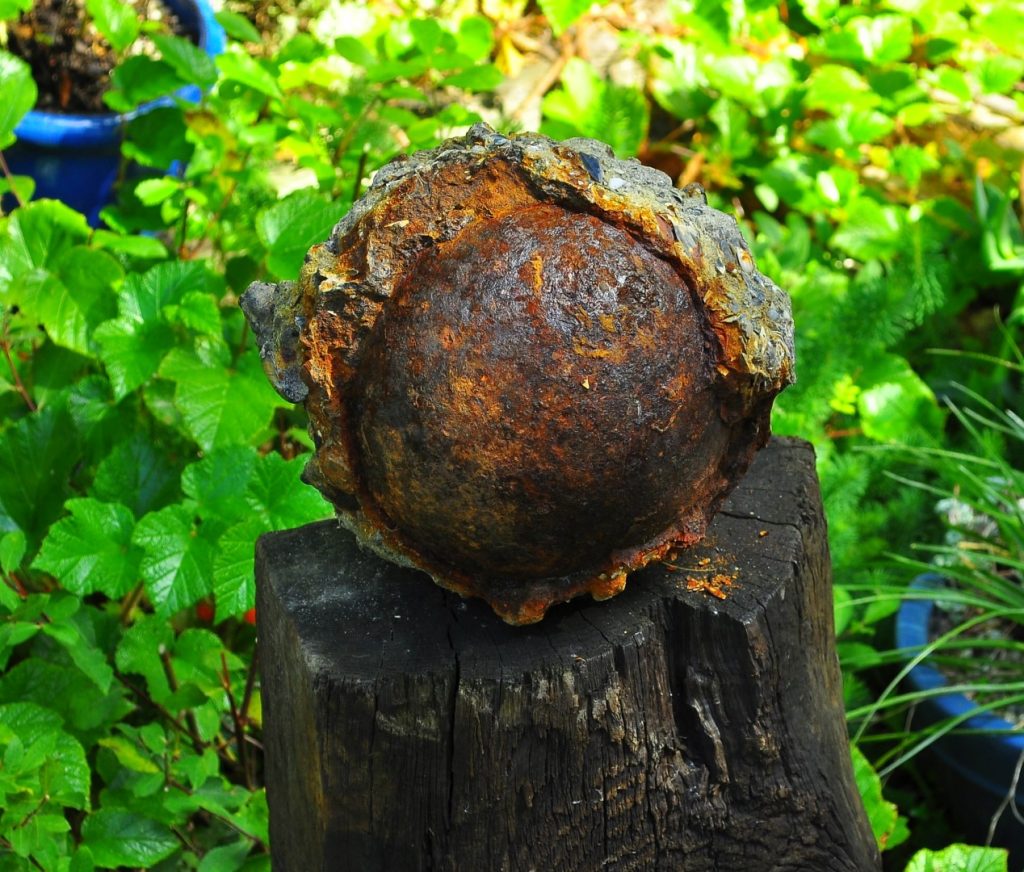 The last recorded instance of an English ship firing cannon balls at a Co. Wexford target was in October 1649 when Cromwell’s forces shelled and captured the Royalist held Rosslare Fort at the entrance to Wexford Harbour .

In a previous life I spent twenty years in Rosslare Harbour with the Irish Revenue Commissioners where I was also the official Receiver of Wreck for the East Coast of Ireland from Arklow all the way down to Waterford and in this time I was involved in researching and retrieving many 17th century cannons and ship’s bells … fascinating work involving a lot of liaison with Llyod’s of London who hold title and records of all ships sunk in the Irish Sea back to the 13th century but this is the first time I have come across cannon balls retrieved from the sea .. so from Cromwell at Rosslare I feel this item in a way has come home where it has pride of place on a piece of railway sleeper in the gravel garden ! 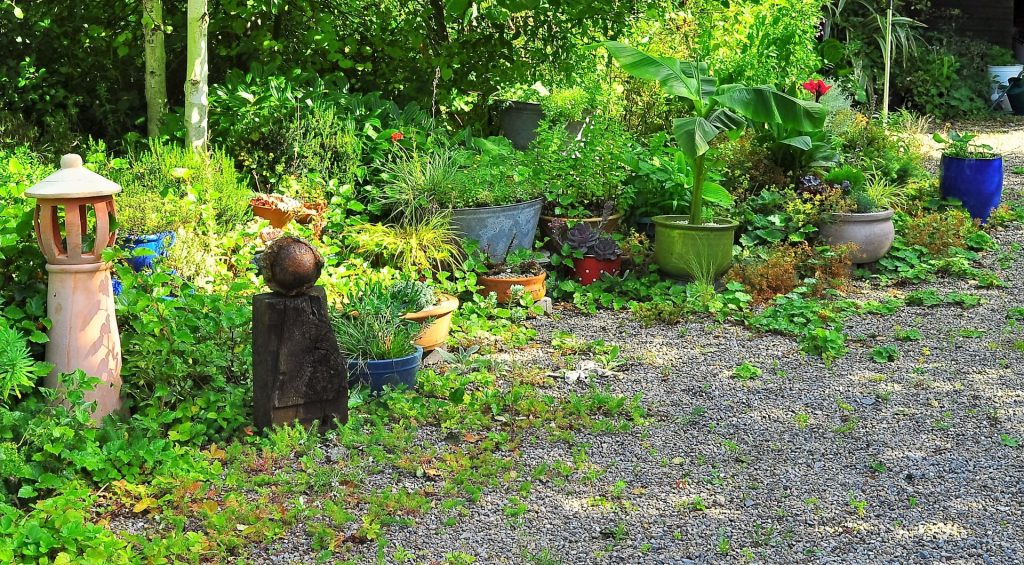 The Garden in August 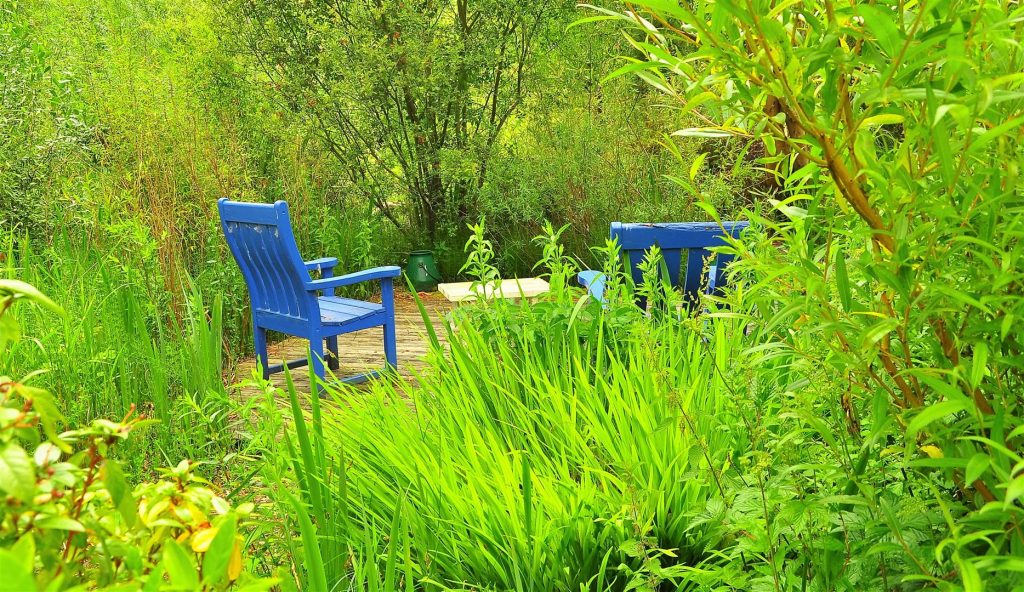 Recent visitor to the Garden 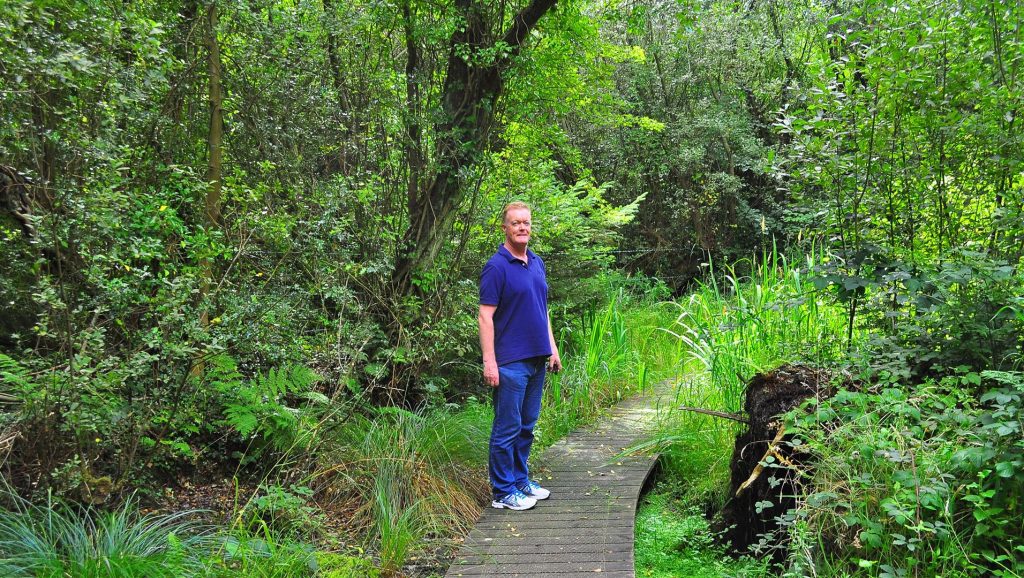