The Garden Open Day in July has come and gone and a bit of normality has returned after a day with over 300 visitors !

Our visitors  included photographers who posted videos and photos on their personal take on the garden and I always find it interesting how others view what we have built here and flattering too that people take the time to do this and we appreciate it very much .

An Open Day is where you get tremendous feedback on your progress in the garden and for sure some visitor will be able to put a name on a particular shrub or perennial plant that you can’t identify plus advice on it’s care and pruning .

There is a lot of work involved in getting the garden ready for an Open Day as naturally you want it looking it’s best or as good as you can and you try and bring it to a peak on the day , grass cut , all weeding done and there is still tweaking going on just as the doors are about to open on the day and after six years opening the garden , hand on heart I can honestly say that we have not yet met anyone who was not extremely nice … I am sure there are lots of gardeners who are not mad about the informality of the planting and for whom not enough cutting back of trees and shrubs has been done and yes we have had quite a few comments on the dangers of Japanese Knotweed and why do I have it at all in the garden but I embrace and showcase by using it to form a tunnel between two parts of the garden but after all it is a beautiful foliage plant and before long there will be a natural predator found that works well in Northern Europe and which will put a halt to it’s gallop . 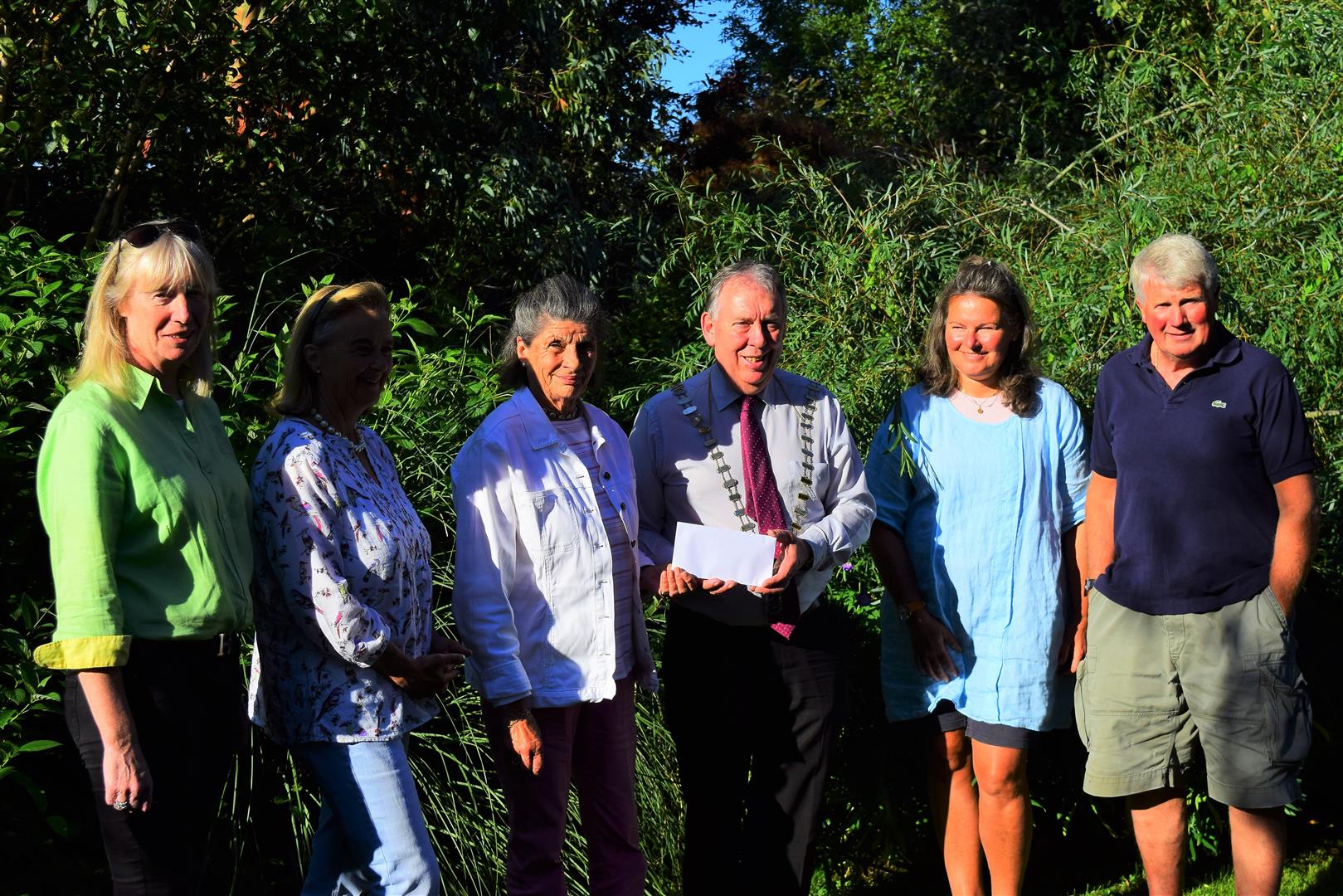 Today I have been tidying up the lavender after it has been flowering through June and July and it reminds me that really it is not suited to our Irish rain and general conditions after seeing how it thrives in the baking conditions of Croatia a few weeks ago as here it dies back badly and after a pretty severe pruning will look miserable until some new growth is put back on by September , I only have a dozen or so plants and don’t plant it anymore … beautiful of course in full bloom , spectacular really but I want more from a plant / shrub after flowering i.e. interesting bark or leaf colour and lavender no longer cuts it for me .

A favourite plant of mine is in full bloom just now in August and walking off the shelves in the garden centres , crocosima, which is also know by it’s older name montebretia , there are various forms of it with red flowers, George Davison , Emily Davison etc. but as I grow it mainly for it’s foliage because it clumps up nicely with erect sword like green leaves a half metre high and has great structure from early April to end of September so the flowers nice as they are just a bonus for me … crocosima dies badly though and becomes an untidy mess  … Lucifer is the version most widely grown in Irish gardens but I don’t like it although it has the nicest flowers , vivid red which it throws out in sprays but at nearly two metres tall it is only fit to be grown at the back of a border and it flops over very badly too early in the season . Crocosima a native of East Africa will happily grow in most conditions and a small pot bought now will increase rapidly once in the ground and it is easy to lift and divide after a few years , the corms are small and will take extremes of soil conditions . 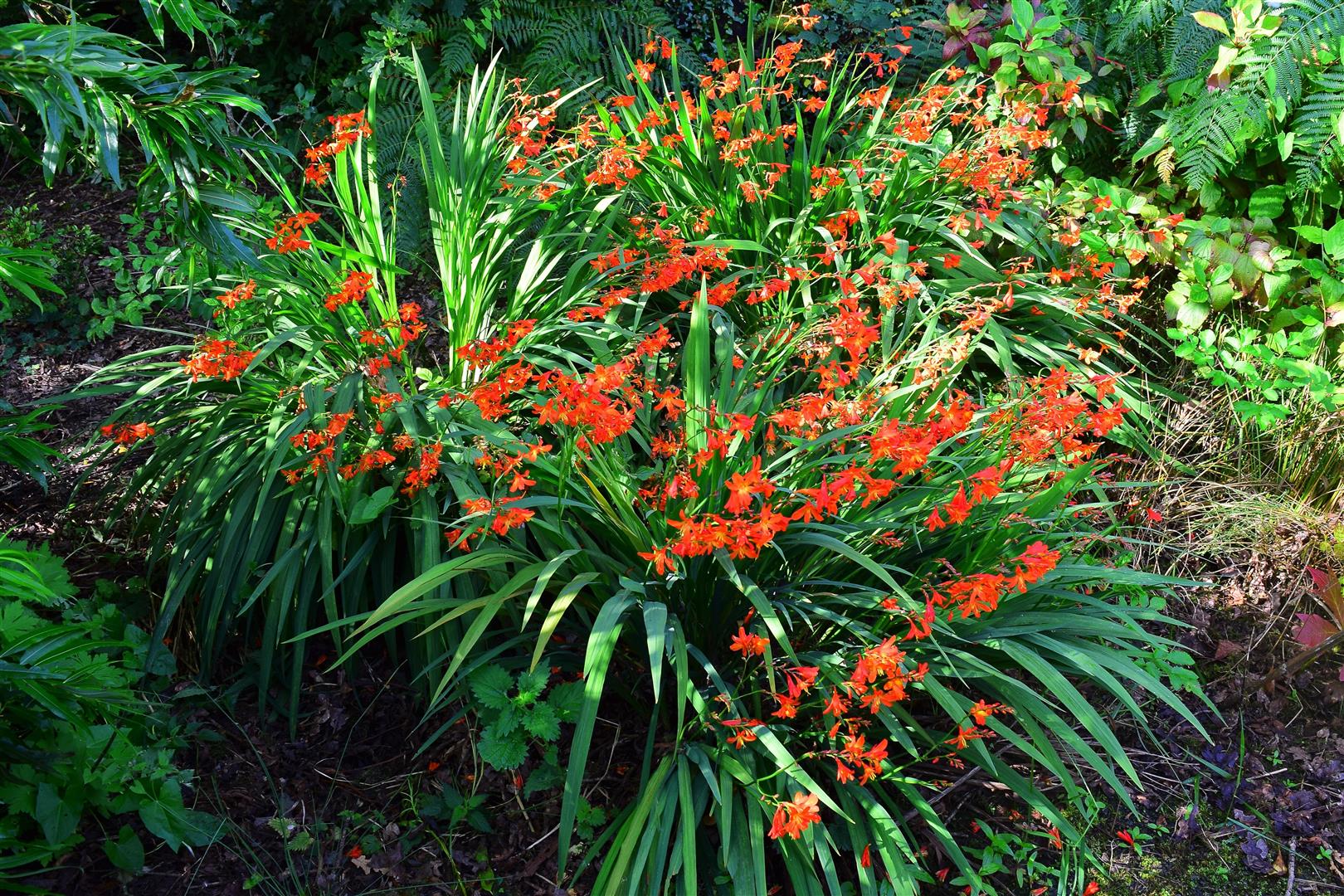 Another shrub in glorious bloom just now at the end of August is the fuschia , I don’t grow the flowering type apart from this specimen as for the rest of the year it is less than inspiring and looks rather dowdy , I have this in a position in the raised wooden beds at the front of the house where it doesen’t dominate and I don’t have to look at it except when in bloom … and then it is beautiful … I prefer to grow the variety versicolour which is a terrific foliage plant with insignificant flowers but you grow it for the beautiful variegated cream / grey leaves . 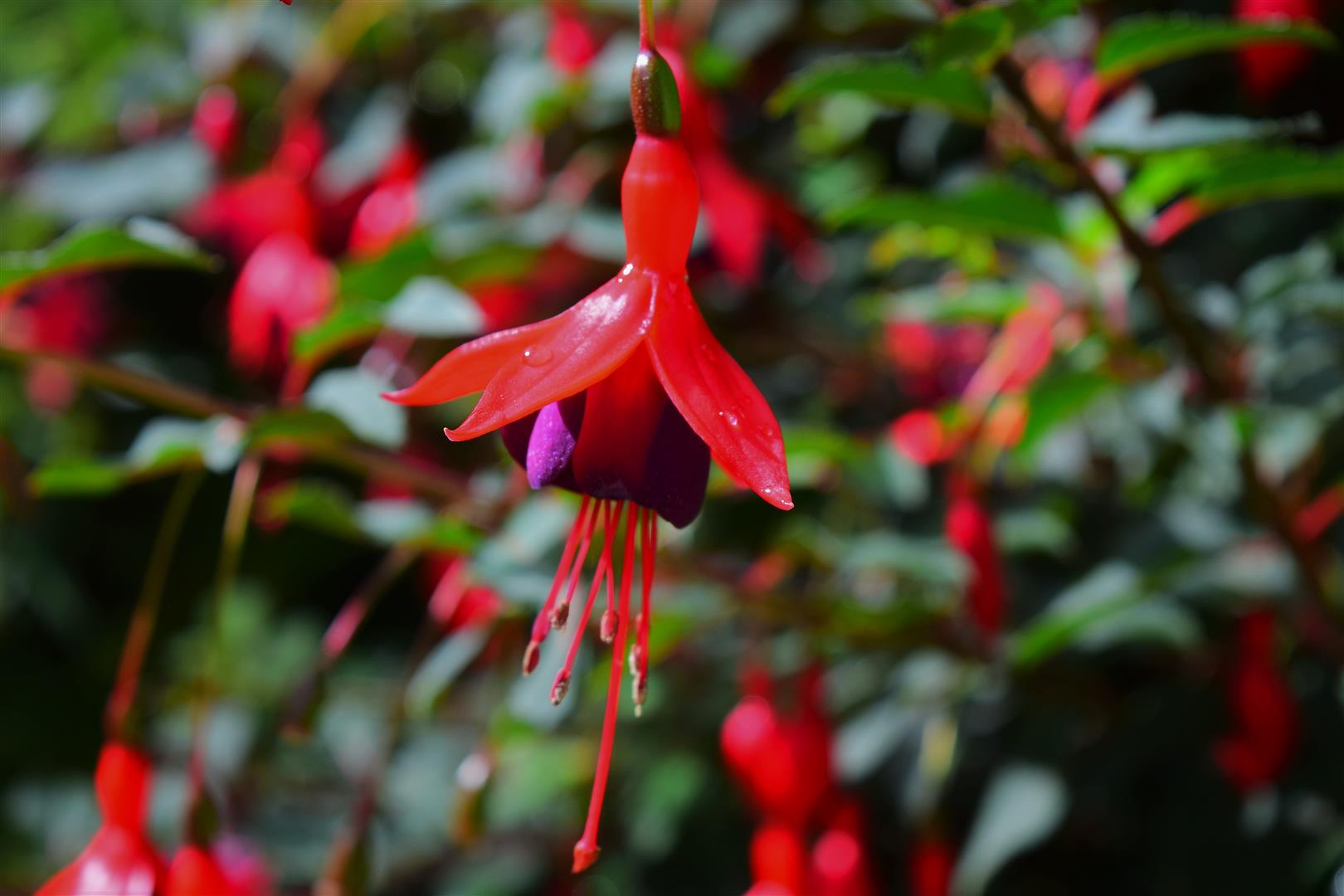 In June I wrote about a visit to June Blake’s garden in Co. Wicklow and why I felt the ladies prefer it to her brother , Jimi’s garden , a few miles up the road in Blessington  … well we got to Jimi’s garden in late July and what a contrast in styles and we much preferred it , a wonderful wild garden and I can see that it is it’s informality that puts off the ladies … but for us a great garden . Having said that I saw Jimi’s interview with Monty Don recently on Gardener’s World where he did part of the interview bouncing up and down on a trampoline like a demented leprechaun … what was that all about ? … it came across as idiotic paddywhackery or how the brits like to think of us Irish as quaintly eccentric … perhaps it was an idea of one of the Gardener’s World producers as being weirdly Irish off the wall but it came across  badly and let us all down . 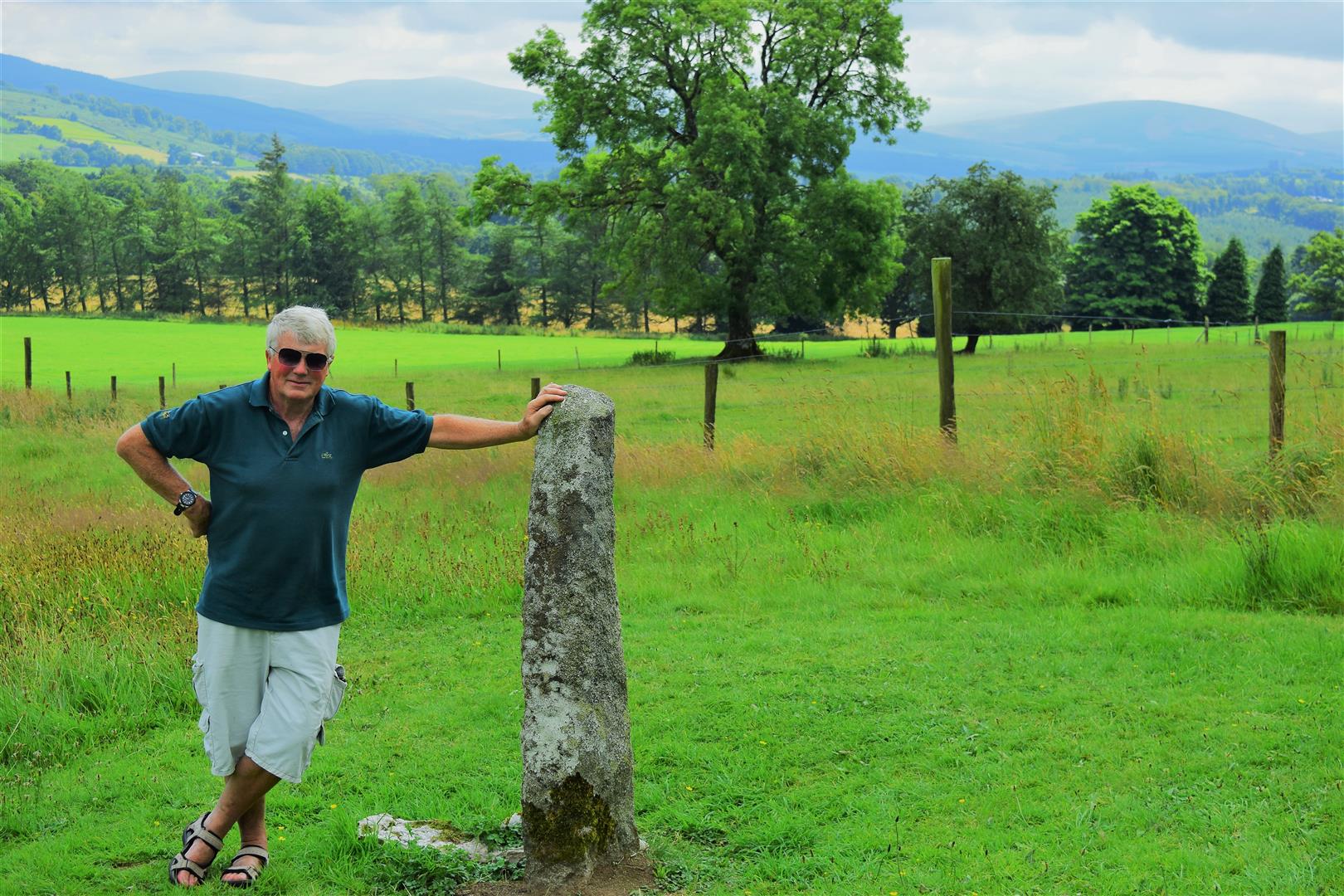 A Neolithic standing stone on the boundary of Jimi Blake’s Garden in Co. Wicklow , August 2017

August was our month for visiting friend’s gardens , Margaret Rea’s set in farmland outside Cahir and Mary O’Donovan’s Fairy Hill , a three acre woodland garden with river Suir frontage  in Clonmel . I have been many times to both gardens but this was a first time for Snezana and a walk with Margaret and Mary is an education as both are keen plants people  always on the look out for new varieties of shrubs and perennial plants , hydrangeas in Margaret’s case and camellias and rhododendroms with Mary . Both gardens were at their best and a pleasure to visit . 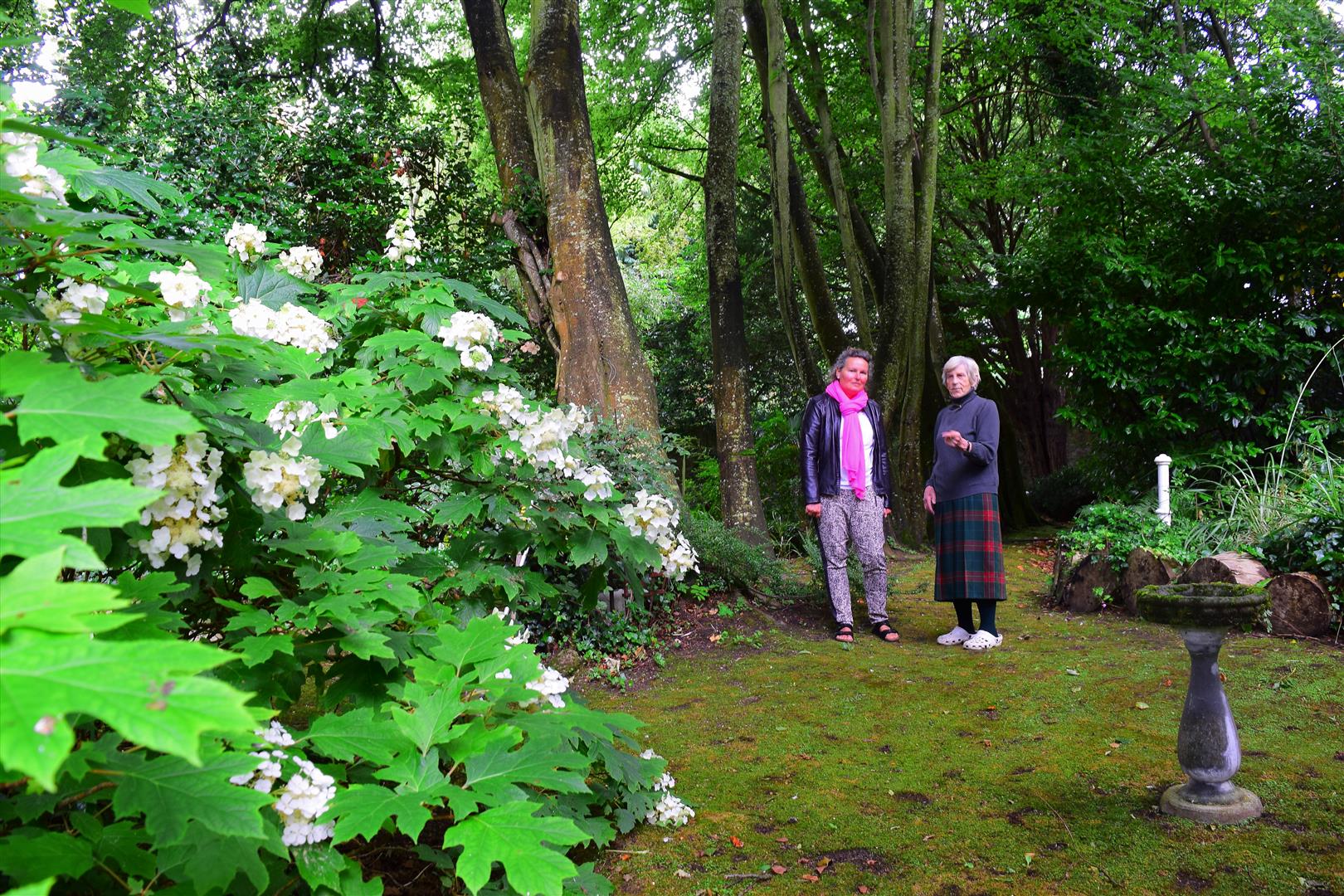 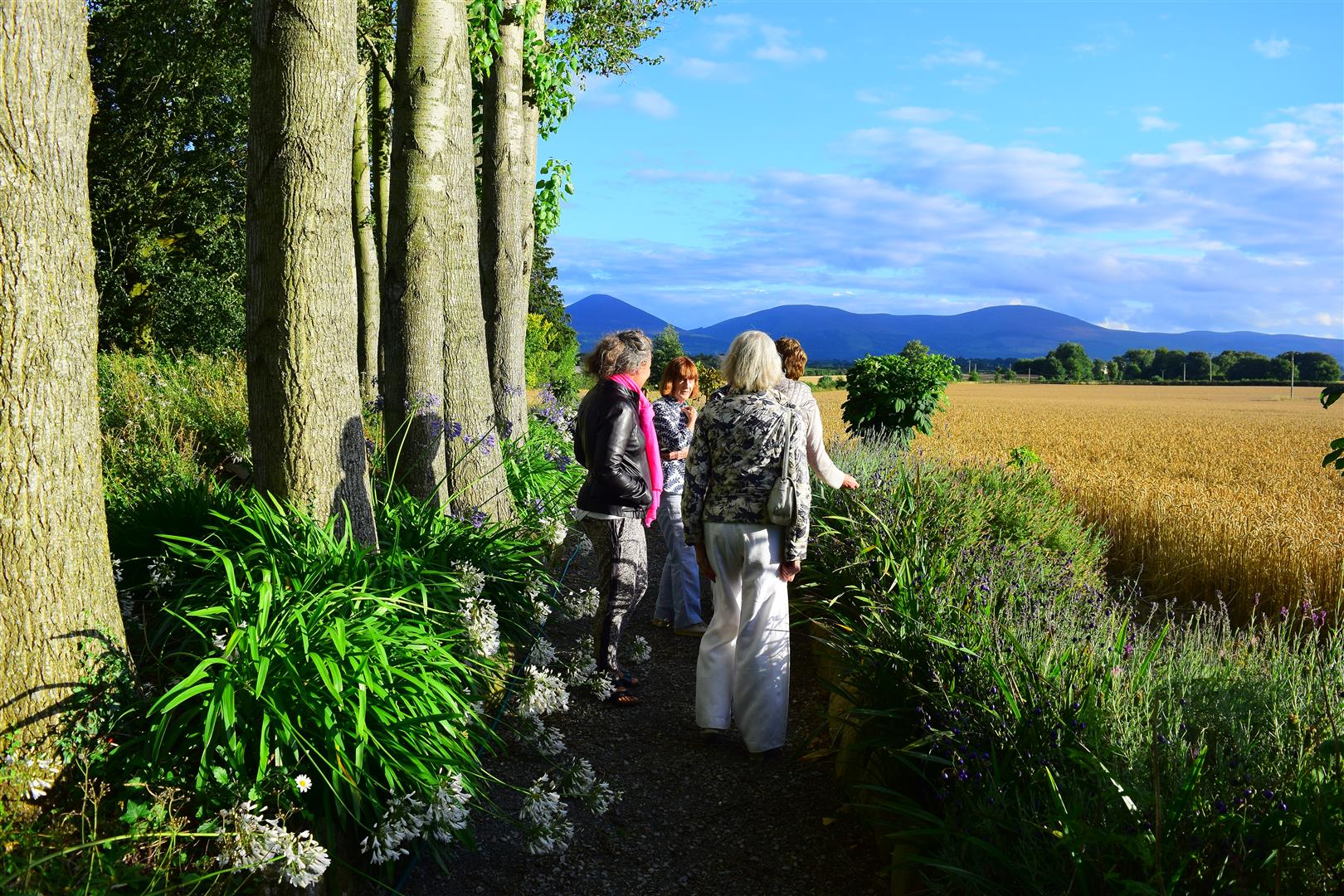 Last week we used Peter Cullen’s expertise with a chain saw for one of our regular thinning out operations of the conifer wood and removed over 40 trees which had either died or were too densely planted thirty years ago by the previous land owner , we have been thinning the wood slowly for the past ten years and opening it up gradually to the light to the extent that it is losing that sterile conifer look which blacks out the light and where nothing else grows and now we see the beginning of glades and pools of light … conifer woods are always grown for profit and for me they are like giant ghost estates devoid of life and in normal gardening I would never plant them except in a dry area useless for anything else , still our wood is what it is and slowly we are making something of it .

I use the word we but it has been  Snezana’s project from the beginning and now all her hard work is beginning to pay off . 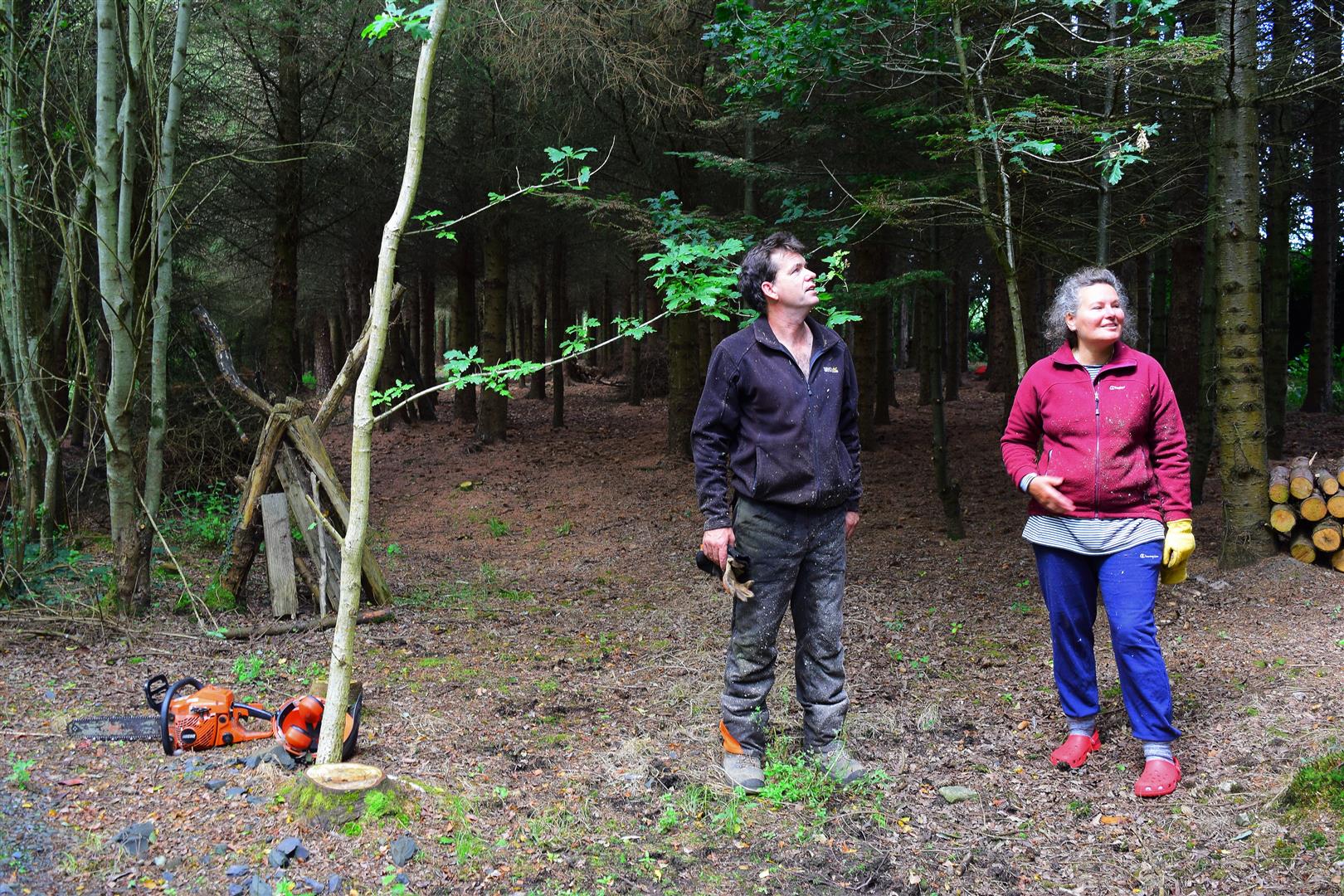 The Cutting Crew on the loose in the Conifer Wood , August 9th 2017

We could have bought twenty chain saws for all the money we have paid Peter over the years to come and thin out the conifer wood for us but I am petrified of using a chain saw as one slip , one moment where you lose concentration and it is bye bye cruel world  … Snezana is forever on about buying her own chain saw and this from a woman if she gets nicked by a thorn runs into the house shouting PLASTER … also I have no illusions on my own Mr. Bean chain saw wielding abilities having borrowed one once thirty years ago in Rosslare and casually sawn off my boot … so Peter’s occupation of chief chain saw user in Petrovska Garden is quite safe ! 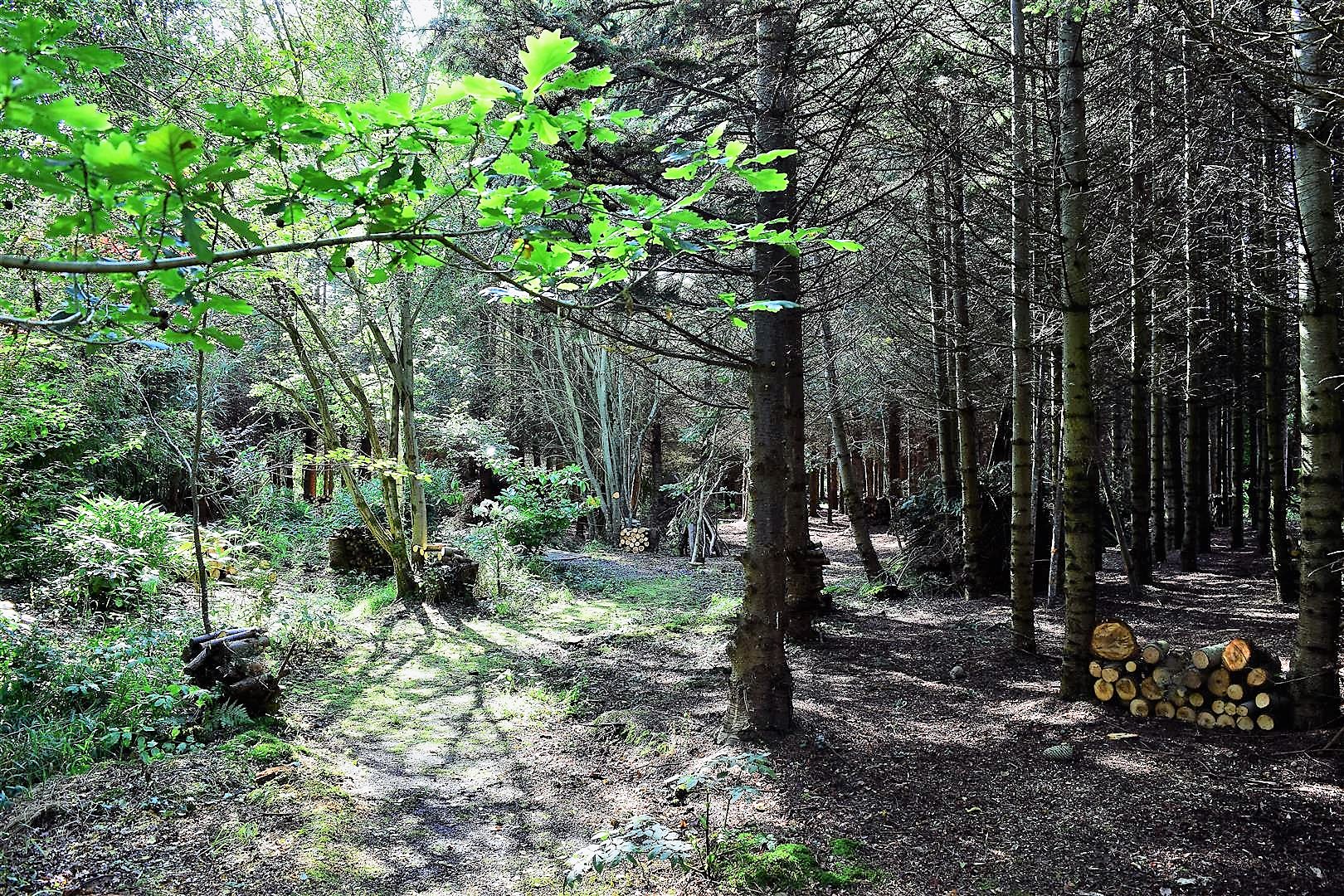 The Conifer Wood is being slowly thinned out , August 9th 2017

This photo of the pond in the front garden shows an interesting water plant , statiotes or more commonly called water soldiers which grows in water but has no roots in the bottom of the pond , instead it takes in nutrients from tails that spread out behind it but what is interesting is that the leaves are full of oxygen which keeps the plant afloat but in the winter the leaves release the oxygen and the plant falls to the bottom of the pond where it remains until April when the leaves take in oxygen again and float back up to the top of the pond where they stay until in November the cycle starts all over again … it attracts dragon flies by the bucket in the summer and while it is an invasive plant it is no problem in a small pond where it can be easily be fished out because of the lack of roots but I would not release it into the wild natural water areas as I learned my lesson with parrot feather another hugely invasive water plant but with the water soldier it unlike the parrot feather it does not clog up the water totally and  I love it’s back story of submerging each winter and rising again in spring . 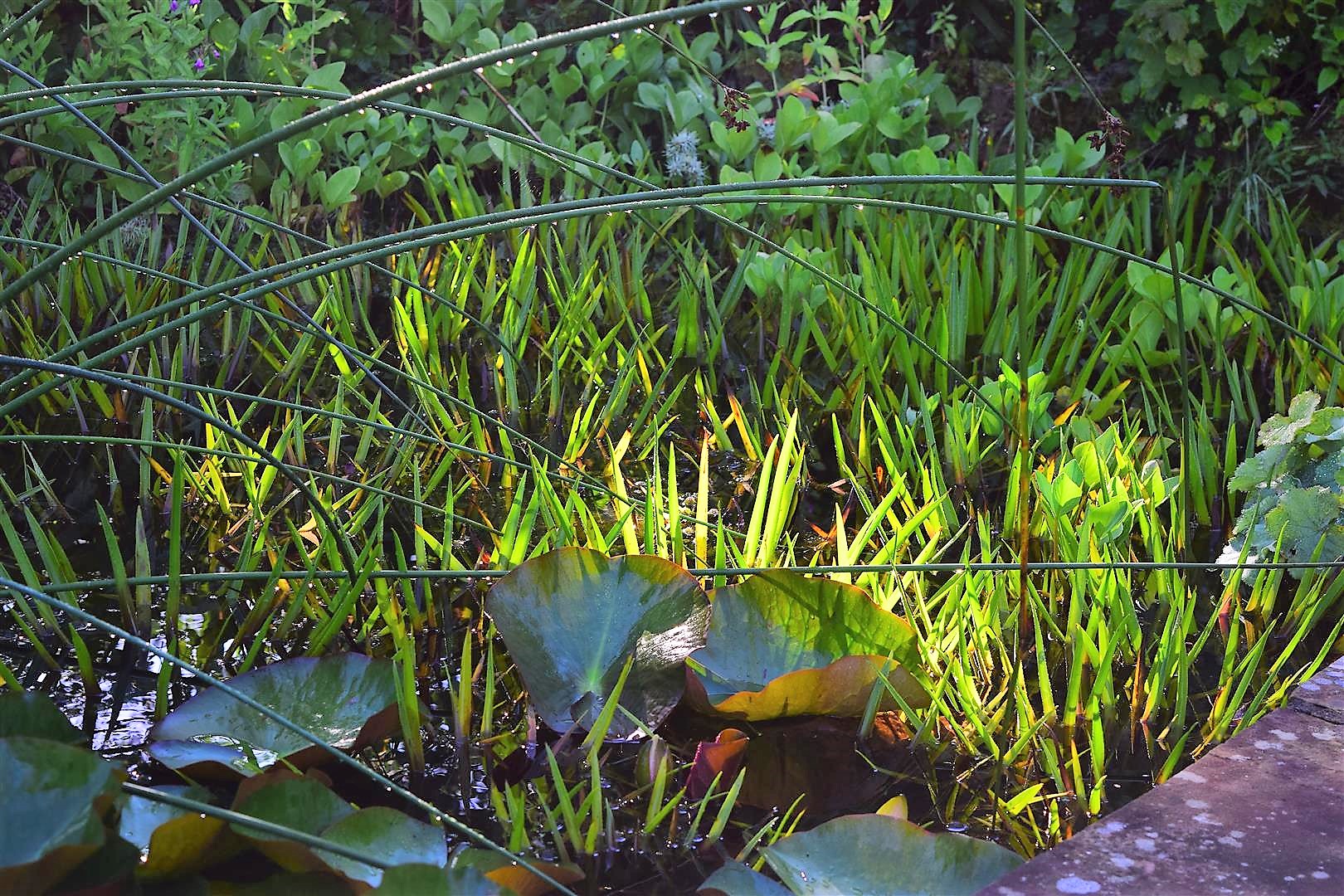 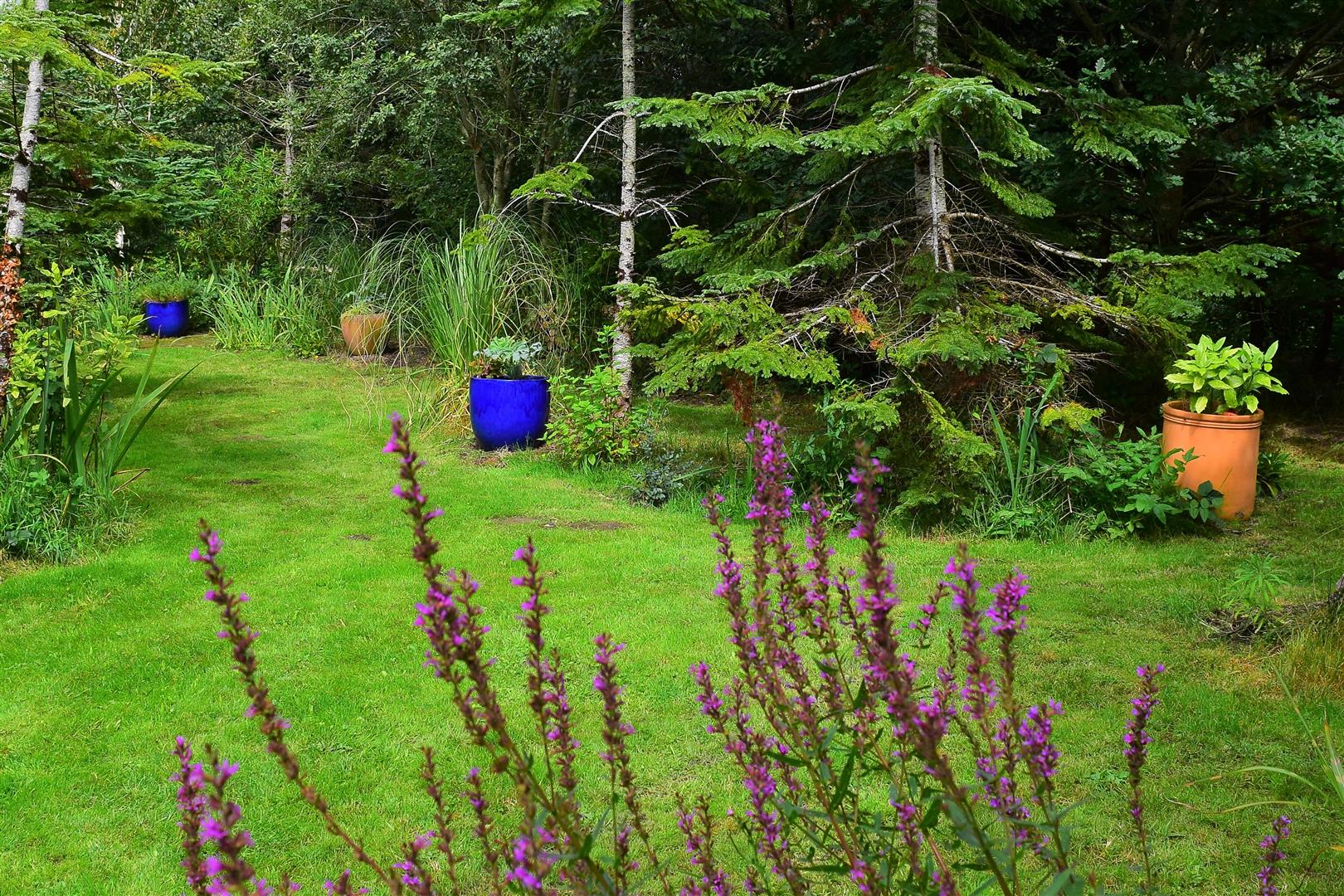 The reclaimed area in the Lower Field August 18th 2017

The last area of brambles that I cleared in the Lower Garden two years ago in August 20015 has now been finished and I have cultivated a lawn leading off it and connecting to the surrounding paths , we left the few conifers to break it up , planted some hydrangea and eucalyptus as a light green backdrop to the conifers and added some large pots of melianthus major with it’s glaucus green leaf to add depth  and take the eye through to the end of the new area and now it is a very restful place to sit with great views out across the garden to the west and an added bonus is that the seating area is in full sun all day .  Several pots long established in other parts of the garden have been transferred to this new area , favourite pots that have served their purpose in areas where the garden was being first established and where encroaching foliage has all but covered them and one such was our very first pot , a large terracotta that Snezana found and fell in love with twelve years ago in Glenconnor Garden Centre here in Clonmel and it has been moved several times and I have found myself walking past it for the past few years and hardly noticing it … until this evening when I rolled it the length of the garden to the new patio area and it is such a beauty that it deserves to be seen again in a more prominent position instead of tucked away among the dog wood area. 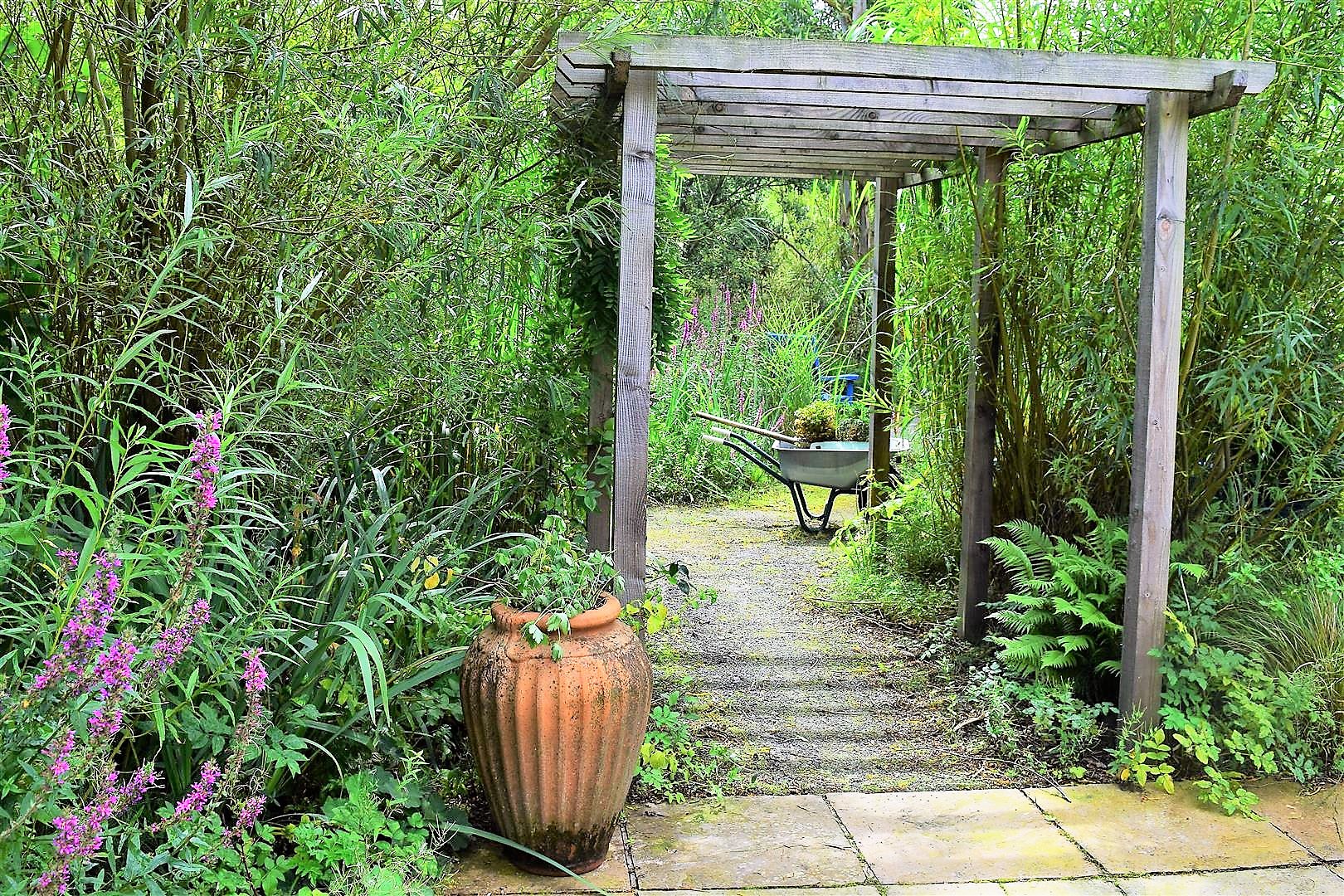 The terracotta pot that found a new home in the new patio area , August 20th 2017 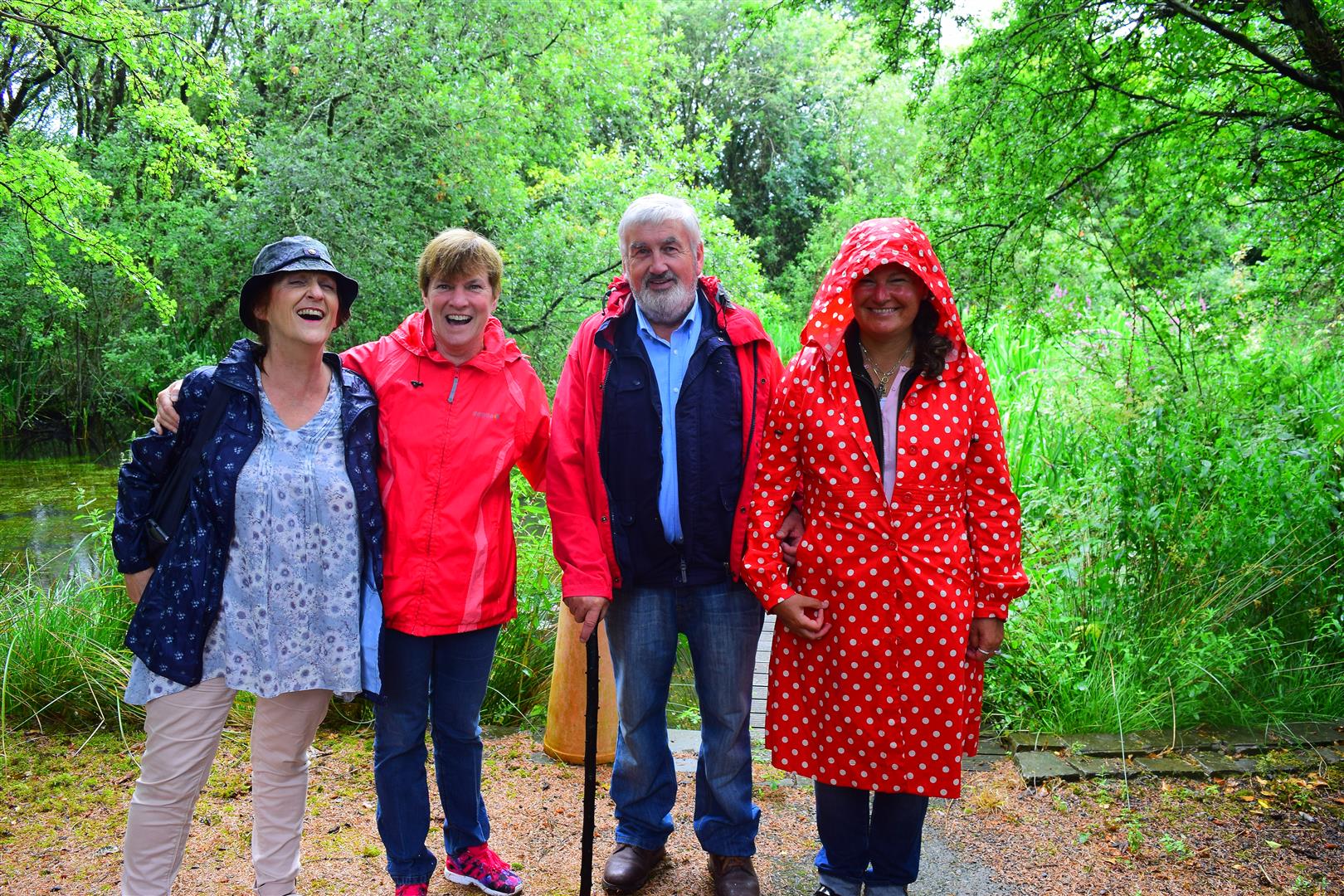 Chenta , Karol , Ed and Snezana on a wet day in July 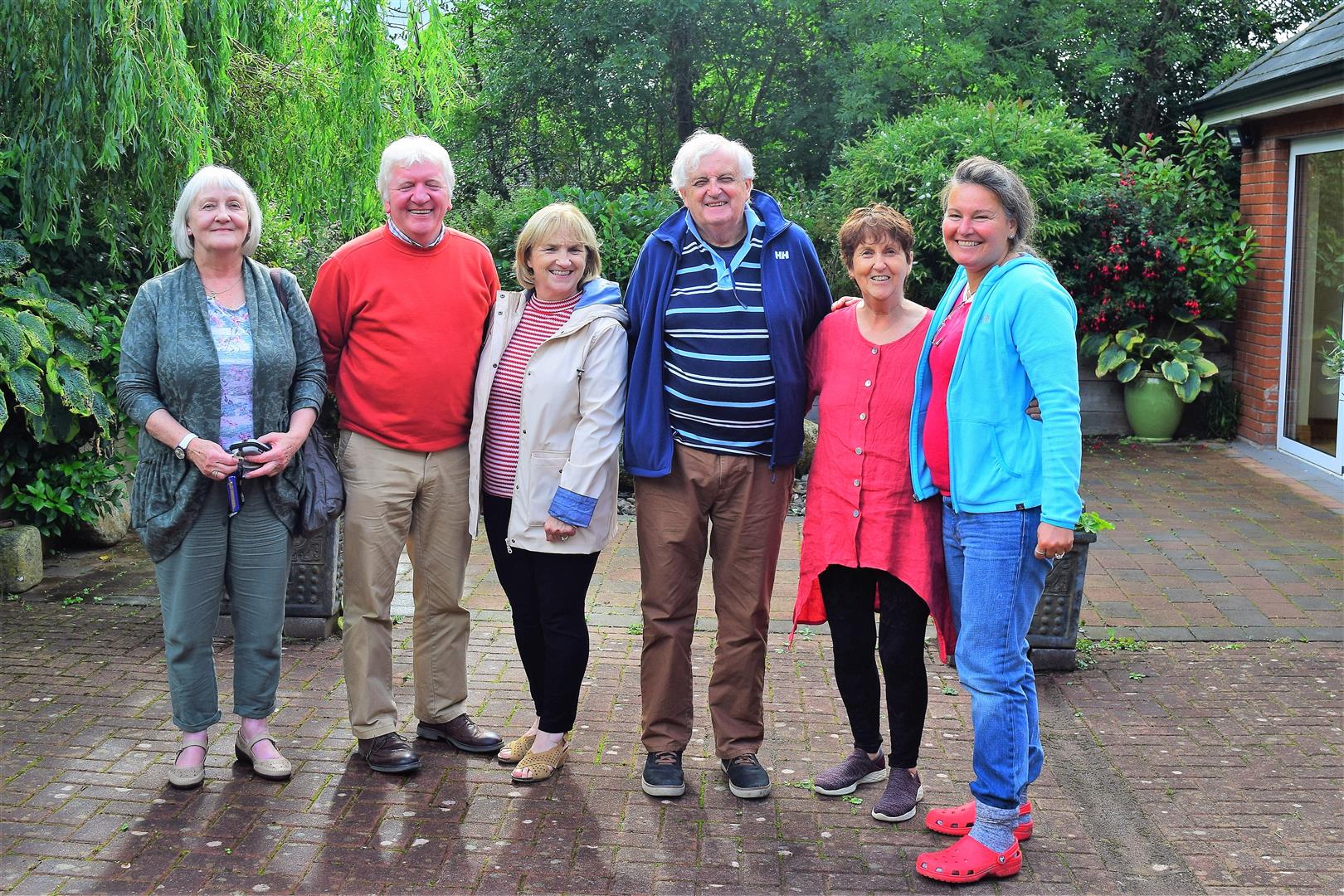 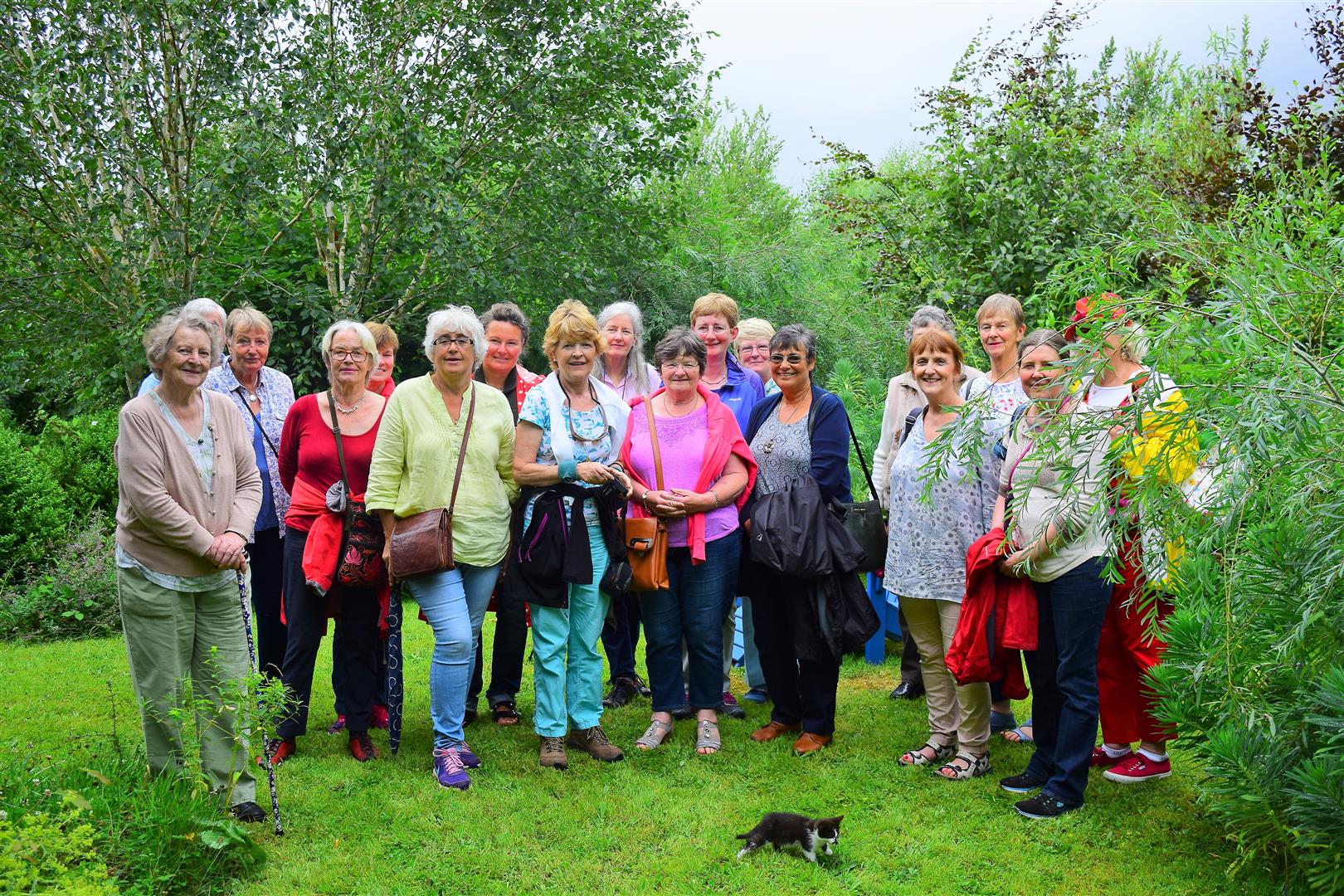 Over from London and formerly of this Parish 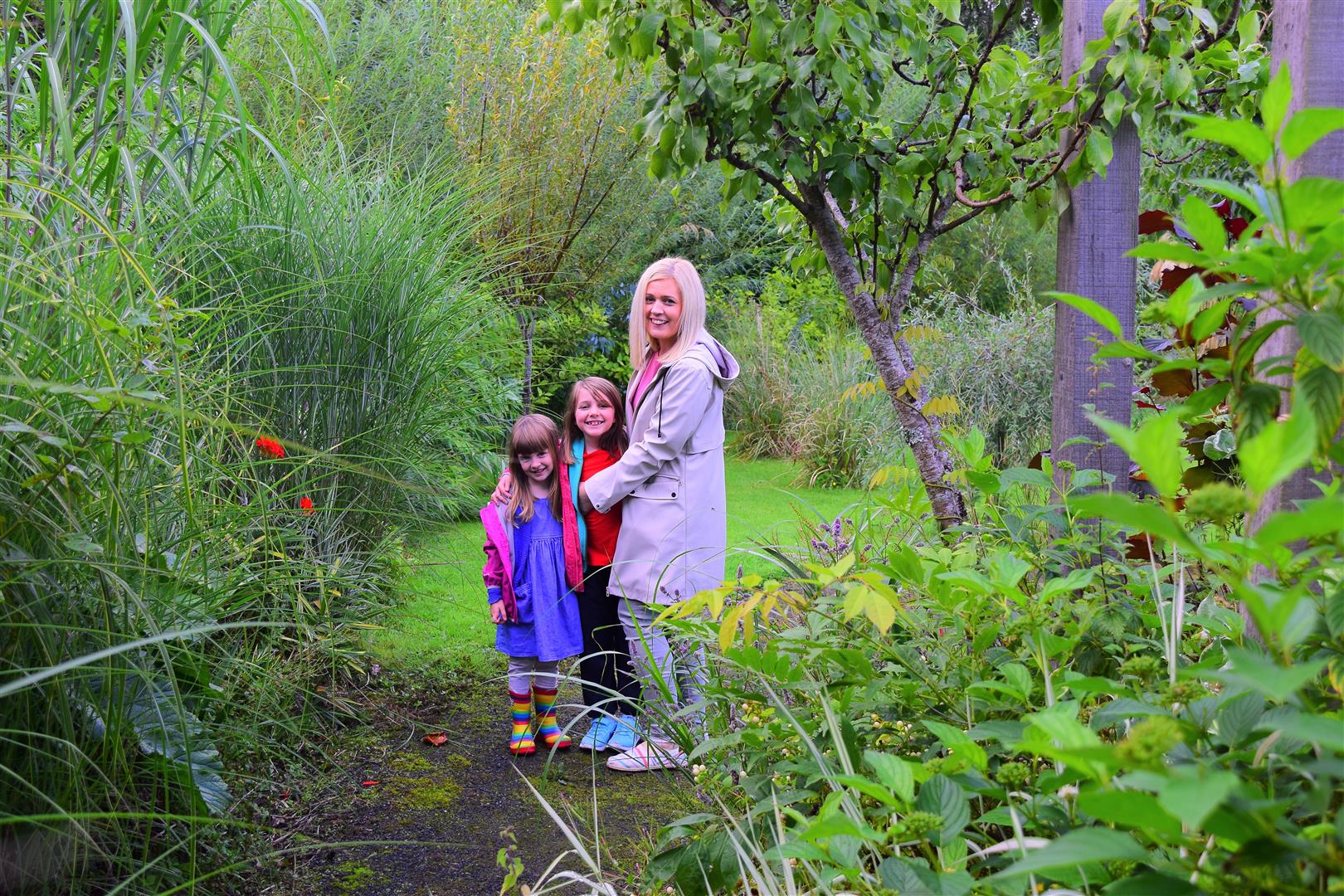 Enjoy the rest of the summer !