I was given a present recently of a fairly mature Acer Griseum , the paper bark maple , which had been potted up each year in a commercial nursery so it had a nice big trunk which was peeling well  already and I planted it today … all maples need a damp soil or at least not dry to grow and more importantly they need shelter so it is a waste of time to stick it in the middle of an open field and expect it to be anything other than a straggly mess struggling to survive  .  That is the problem with a fussy tree like the maple , you won’t get to plant it where you want it to go but eventually after tramping around the garden with the tree in a wheel barrow I found the ideal combination of soil and wind protection in the Lower Garden where there is already a flourishing red oak and a spectacular red maple and which the deer have never touched so fingers crossed for our new acer griseum !

Wild cress grows like crazy in our  stream and the water garden and we need to rip it out three / four times each year , a lovely plant and a lot of gardeners would love to have it and indeed it is manageable in a lined pond but our ponds are dug out of natural earth so the cress romps away in the mud and in the quieter parts of the stream where the water is not fast moving . Cress is an example of an invasive plant which will take over a garden like the awful parrot feather which with cress has taken over all the waterways in Tennessee as has the American skunk cabbage , americanus lychnis which has a beautiful yellow stem flower at the beginning in March each year and this is followed by magnificent paddle like leaves up to a metre long  … now I wish  this would colonise more in this garden where we have  six plants that get bigger every year but they are not invasive in Ireland or the UK so one man’s weed is anothers highly sought after favourite . 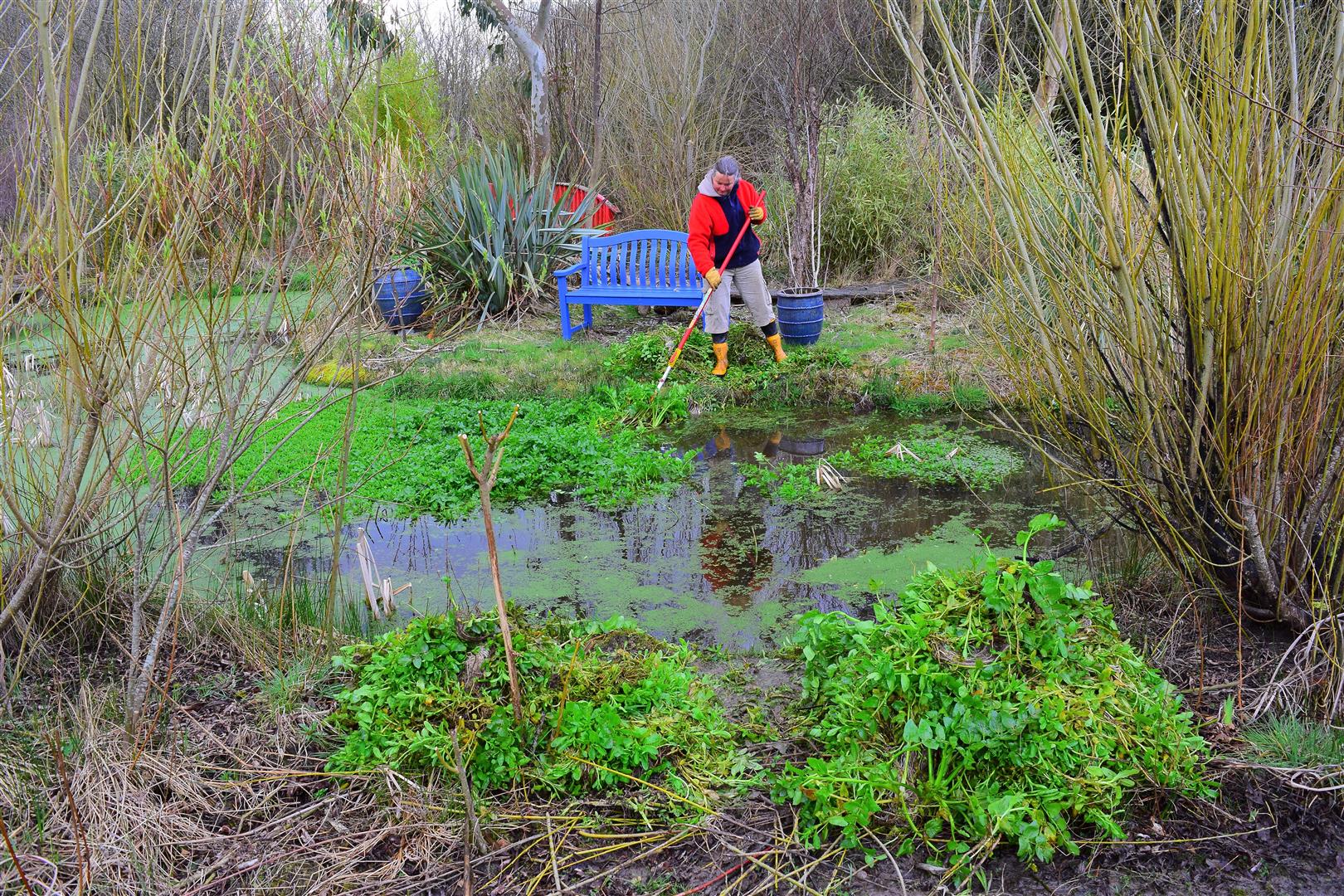 Clearing out wild cress in the Water Garden April 5th 2018

It is important when cleaning anything out of a pond to leave it piled up on the bank for a few days to allow water beetles and other insects a chance to make their way back to the water . 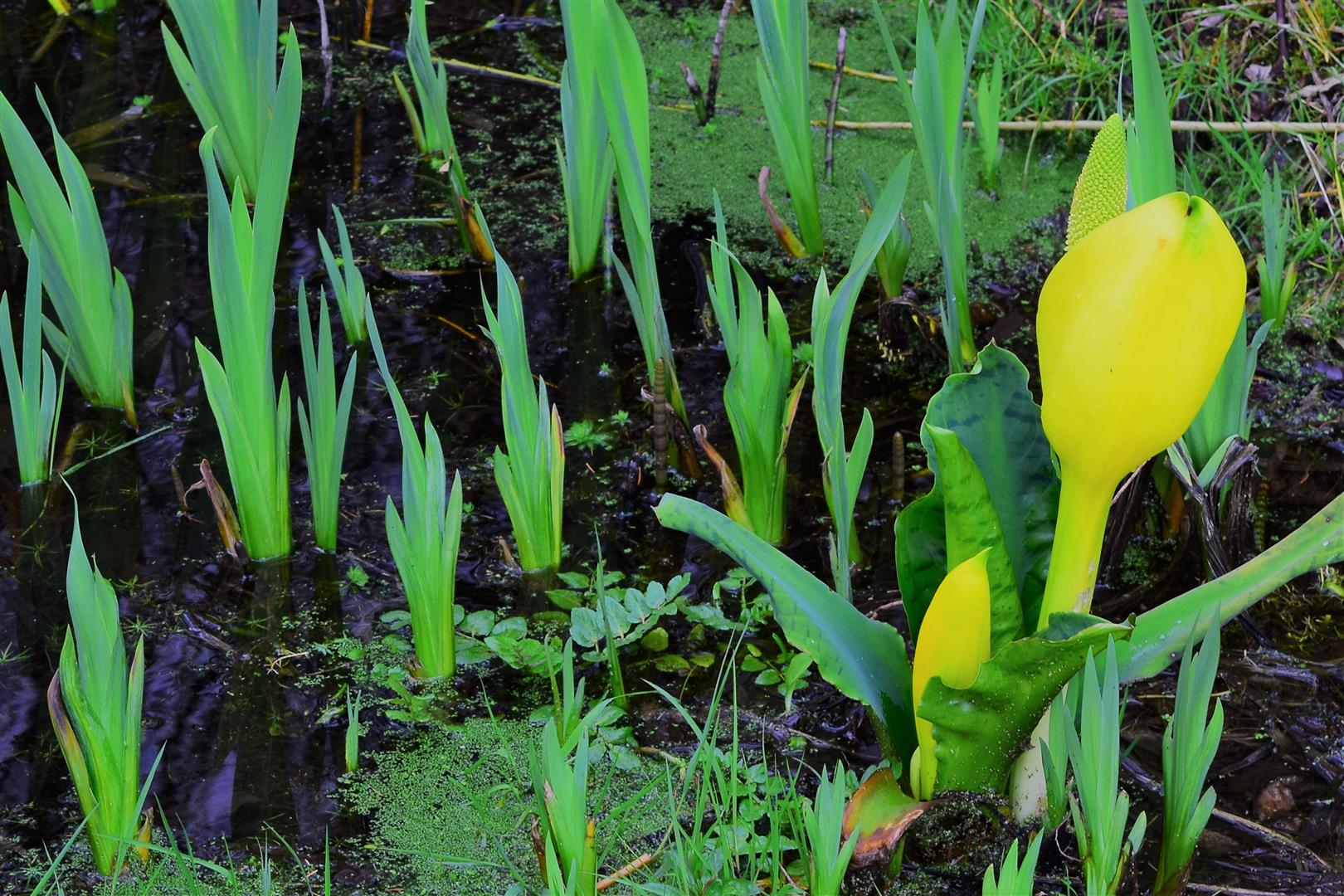 Even though we had such a wet and cold winter and growth is about a month behind plants just need a few good days in early April and growth starts very quickly and before you know it you are playing catch up and so it was with me today when I saw that the hostas were peeping through and in the car on the way to the Clonmel Garden Centre the usual conversation  about what we were looking for arose when I blurted out I was getting slug pellets to blitz the sh.t out of the slugs and the usual recriminations started about organic gardening and not poisoning the environment , the usual tree hugger stuff where I come across as the Josef Mengele of the plant world until I played my trump card that slugs will eat everything soft leafed  , lettuce etc. not just hostas as slugs are only deterred by tough hairy leaves but of course her next demand was well get me some hairy hostas … !

Of course all this sharia law type fatwa pronouncements were brought to the surface by a lecture we attended recently by Karl Wright on “ Better Gardening ” , Karl has one of the finest modern gardens in Ireland and is a vegan , anti weed killer , anti slug pellets and his lecture dwelt at length on possible damage to the environment and the bird life of the garden that non organic prevention methods cause and he found a willing disciple here in Snezana and has led to me with my backpack sprayer being labelled the anti Christ of the garden world and on top of that she found an avid supporter in Susan at the Clonmel Garden Centre when we visited next day … Susan added that hairy  hosta leaves aside that I could  put down garlic powder on my hostas as a slug protector and my reply to both crusaders was that I would prefer to pee over the hostas at midnight of a full moon than rely on organic methods of slug protection  !

Hostas are my favourite plants particularly the big leaf sieboldiana  varieties , Elegans and Francis Williams , but if you don’t protect them against slugs in April then you end up with straggly sorry looking specimens which look at you reproachedly as you pass by until the following November and now there is a super slug on the way namely the spanish slug which is huge and eats everything in it’s path . 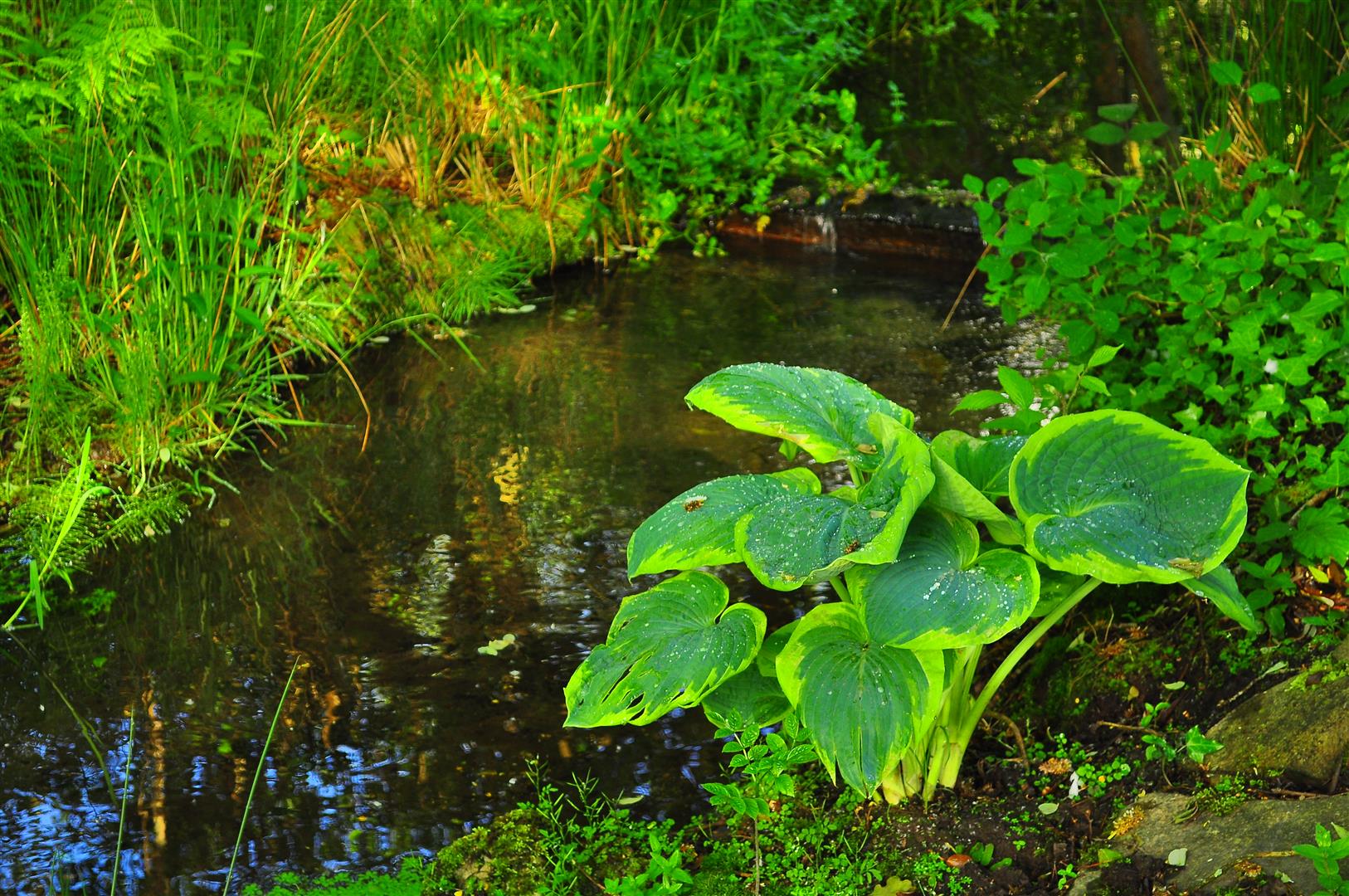 Hosta Francis Williams planted by the stream , May 21st 2014 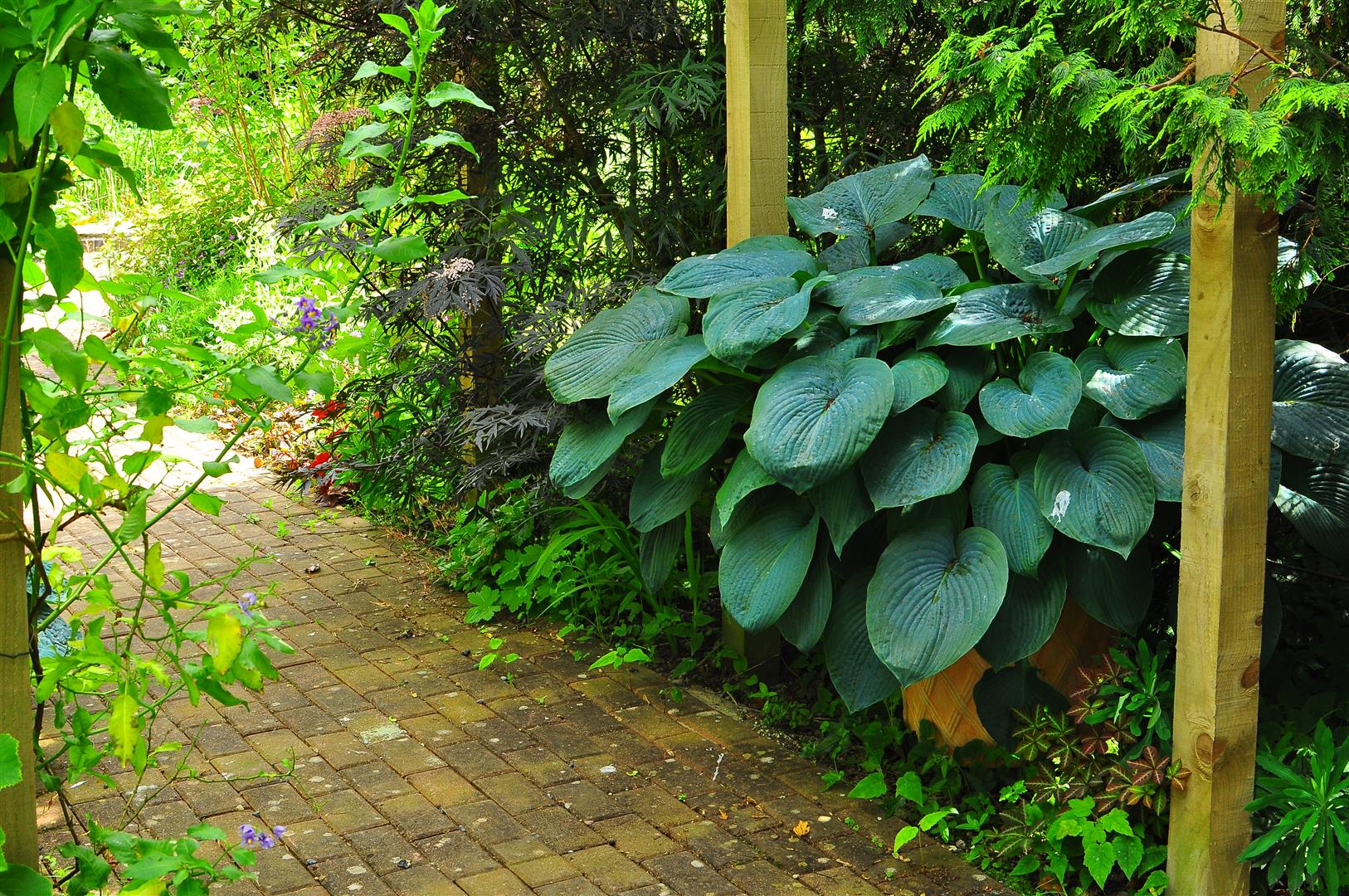 There is an area at the bottom of the lawn near the tree house which is always wet and where I nearly lose the ride on mower even in August so I decided to embrace the wetness and with Peter Cullen driving the digger we dug out the area in early April , laid a butyl rubber liner and installed a pond with a bog garden around the edges . This pond I designed as a wild life area with sloping sides from the lawn where the planting will “walk” into the water with marginals planted from a bog garden edging right into the water with the taller plants such as hostas at the water’s edge where they will not cut off the view of the water as bog plants can get leggy and rampant and you end up with fighting your way through to the water which is then lost from view . 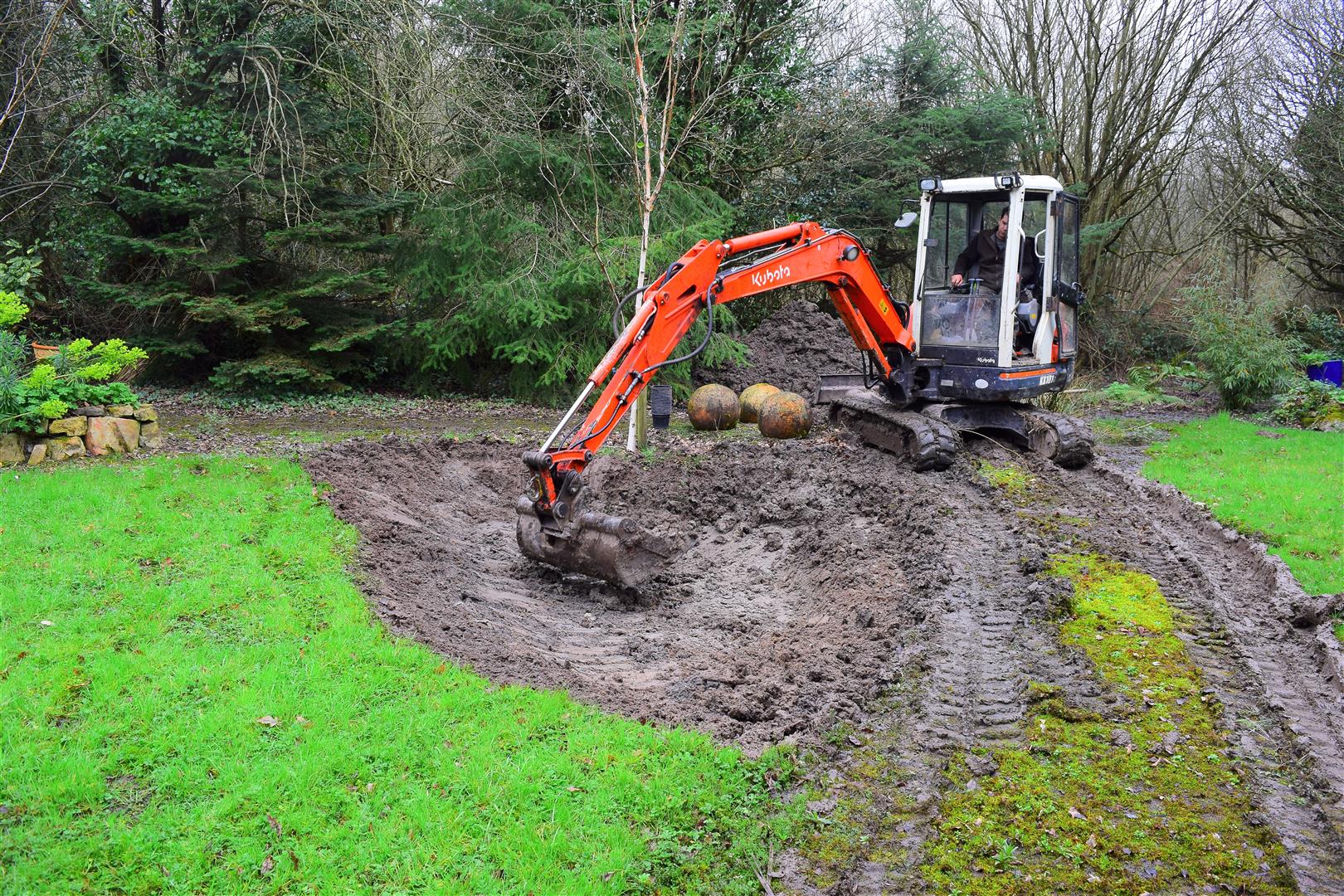 We started out with one shape but the design changed as we went along and ended up with a larger area of water as the liner was laid out … digging out with a digger even for and expert like Peter is not an exact science but there is none better with a feel for a natural lie of the land than Peter Cullen who has done all our hard landscaping since the beginning of the garden in 2006 . 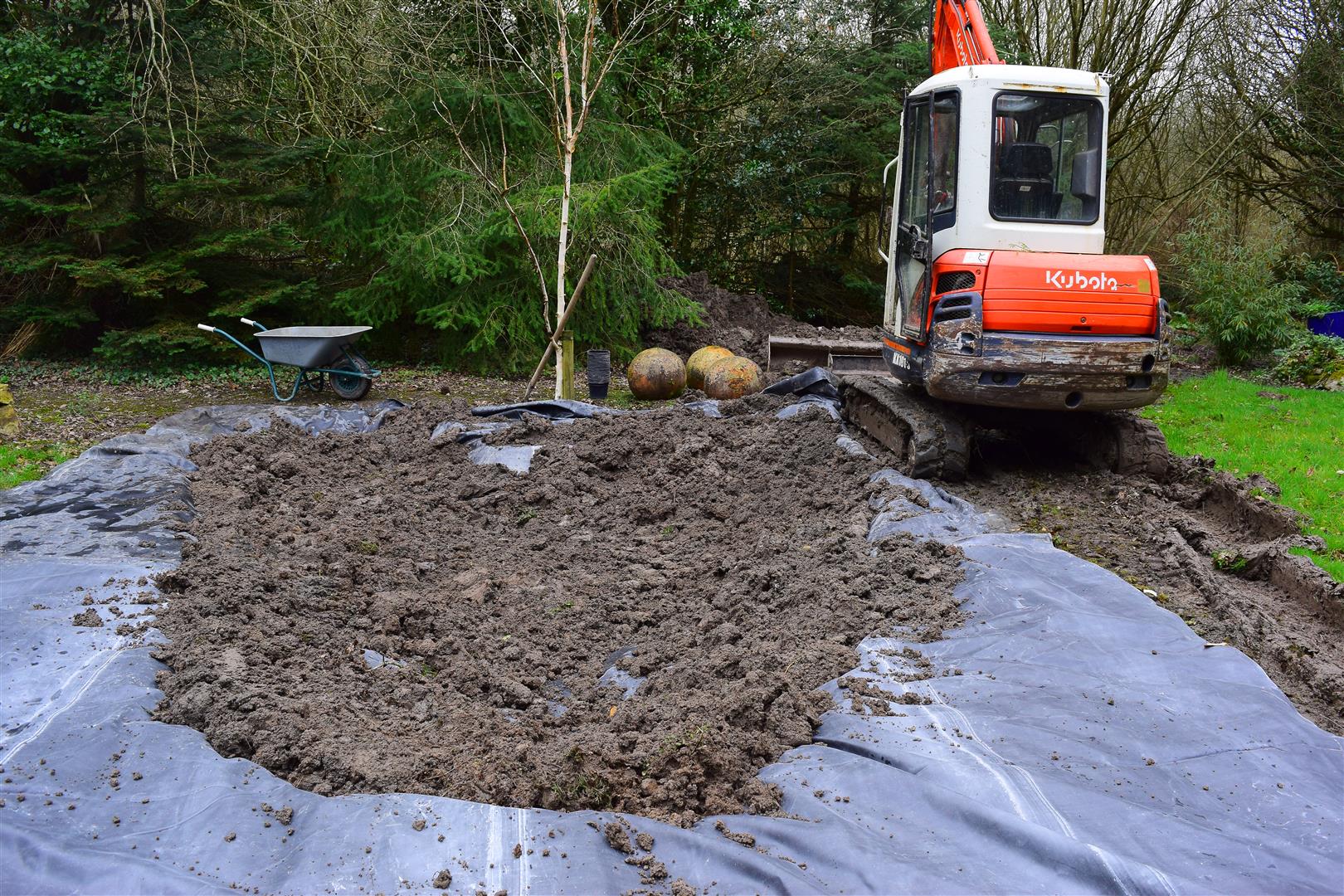 The pond has a thick layer of earth to allow for a bog garden planting direct into the water .

Ending up with more water led to another problem … filling the pond as the nearest source of water was the stream which is two metres lower and twenty metres away … as in try sucking water through  a hosepipe and we had no pump … at this point I am tempted to mention Stormy Daniels but that would be rude and not suitable for my more genteel garden readers … the solution was to lift water in buckets into the wheel barrow and then transfer to the newly lined pond … an operation that Snezana stuck doggedly through over eight hours and over a 1000 litres of water later we had our new pool ready for planting .

As I said earlier this was going to be a wild life pool with planting that needed to be low growing at the grass level and taller plants down the sloping sides to the water’s edge so the choice of plants had to be carefully planned and as it was early in the growing season I was able to divide a lot of our less rampant existing water plants and plant directly into the edges and down into the water . My edging plants at lawn level were slips of geranium biokovo which although not best pleased with damp conditions should clump up nicely , I added variegated iris’s just below the water level with hostas just above the water and I alternated divisions of marsh marigold , caltha , both the wild and the cultivated variety, weaving them into the edge and a few inches under the water . 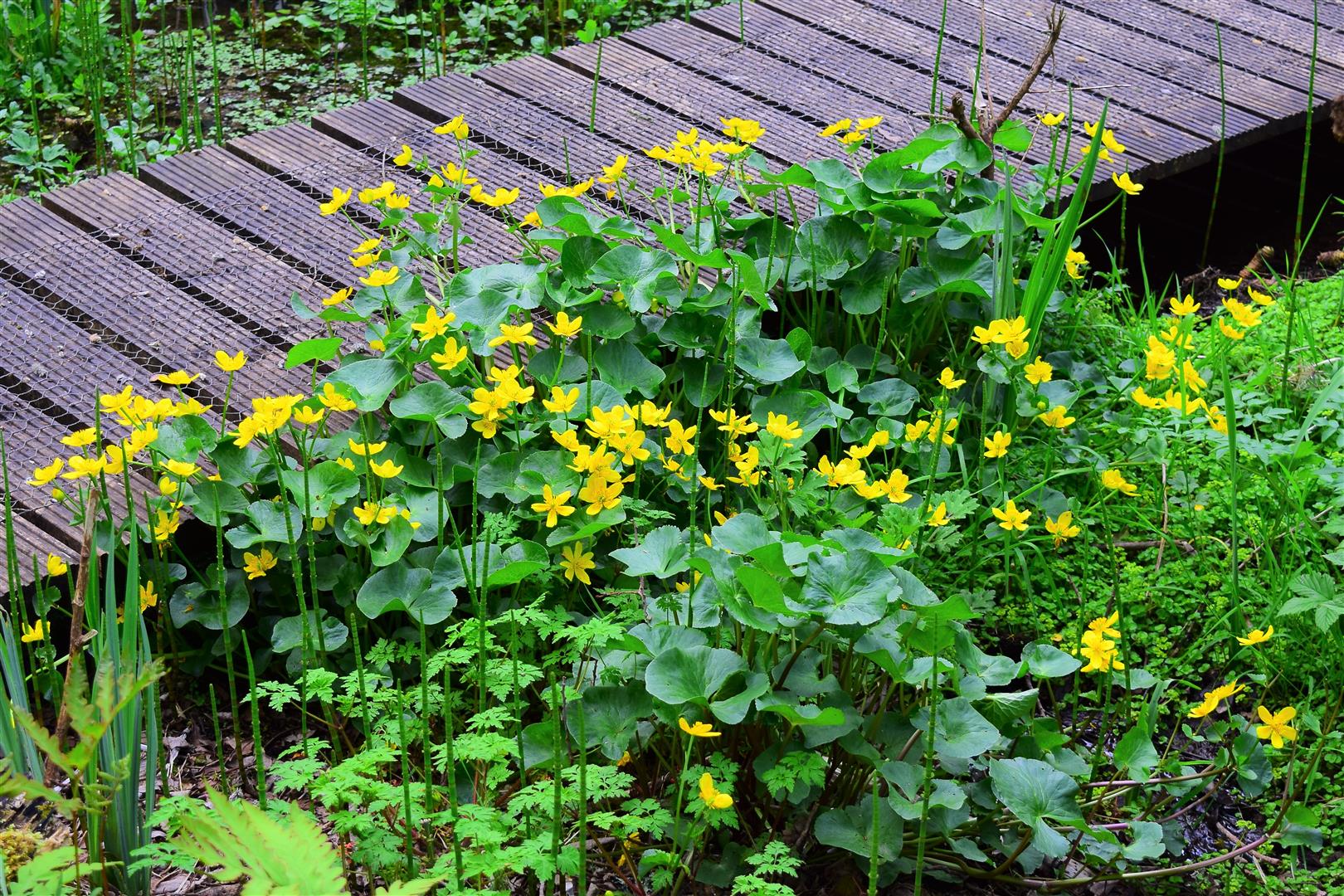 I added lots of houtania which if they take off will blur the edges of the water and give a natural look to the overall pond and added submerged plants such as a few water soldiers , statoides and a few buckets of oxygenating plants from other water areas in the garden plus a few water snails  . As the slopes are deliberately designed to walk in i.e. no ledges I won’t be able to put fish in as the herons who live here will also walk in and eat them but next spring the plan is to carry a bucket of frog spawn from the front pond and this will ensure a wild life presence which hopefully will attract dragon flies and other natural visitors … already I have seen deer hoof prints at the edge . 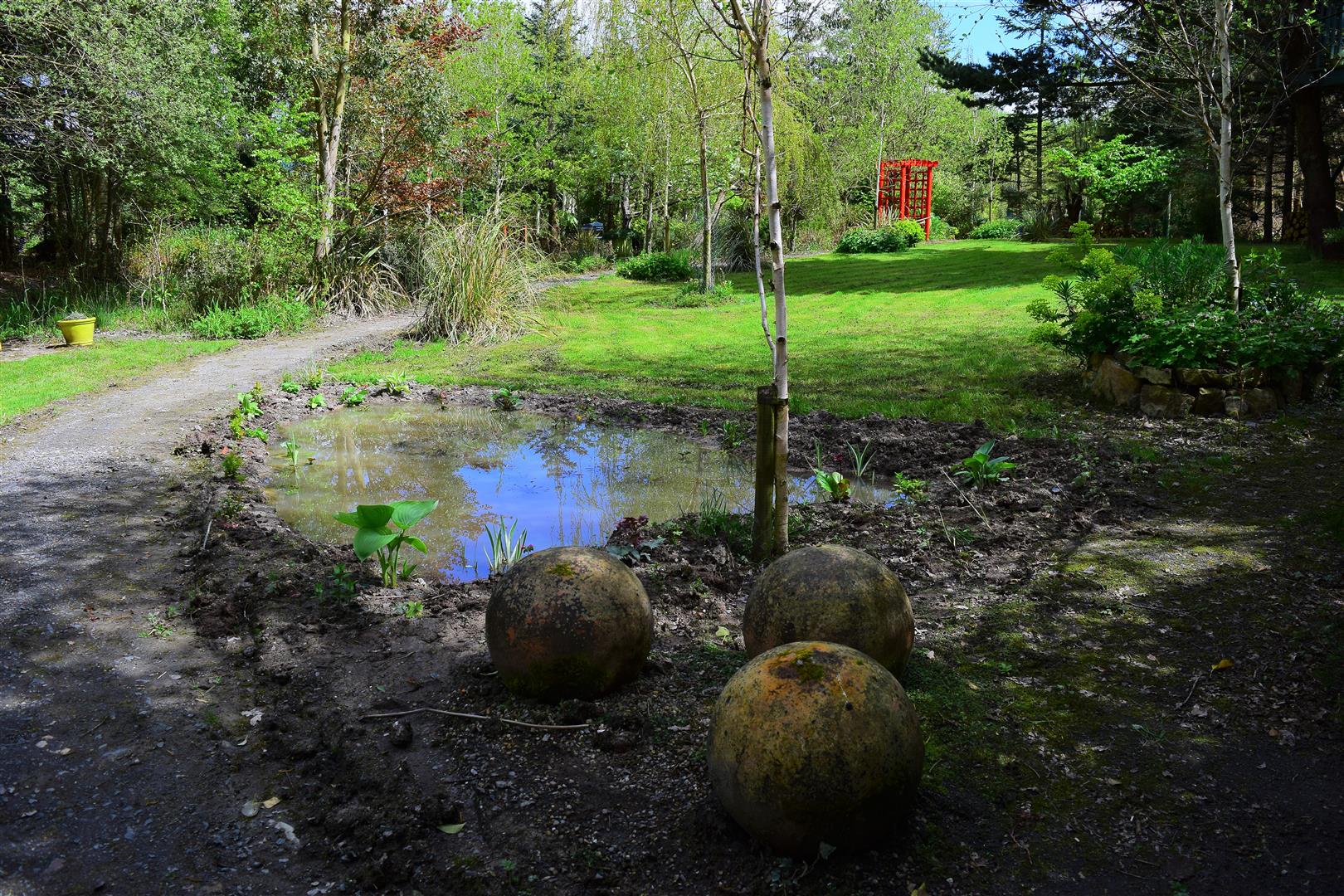 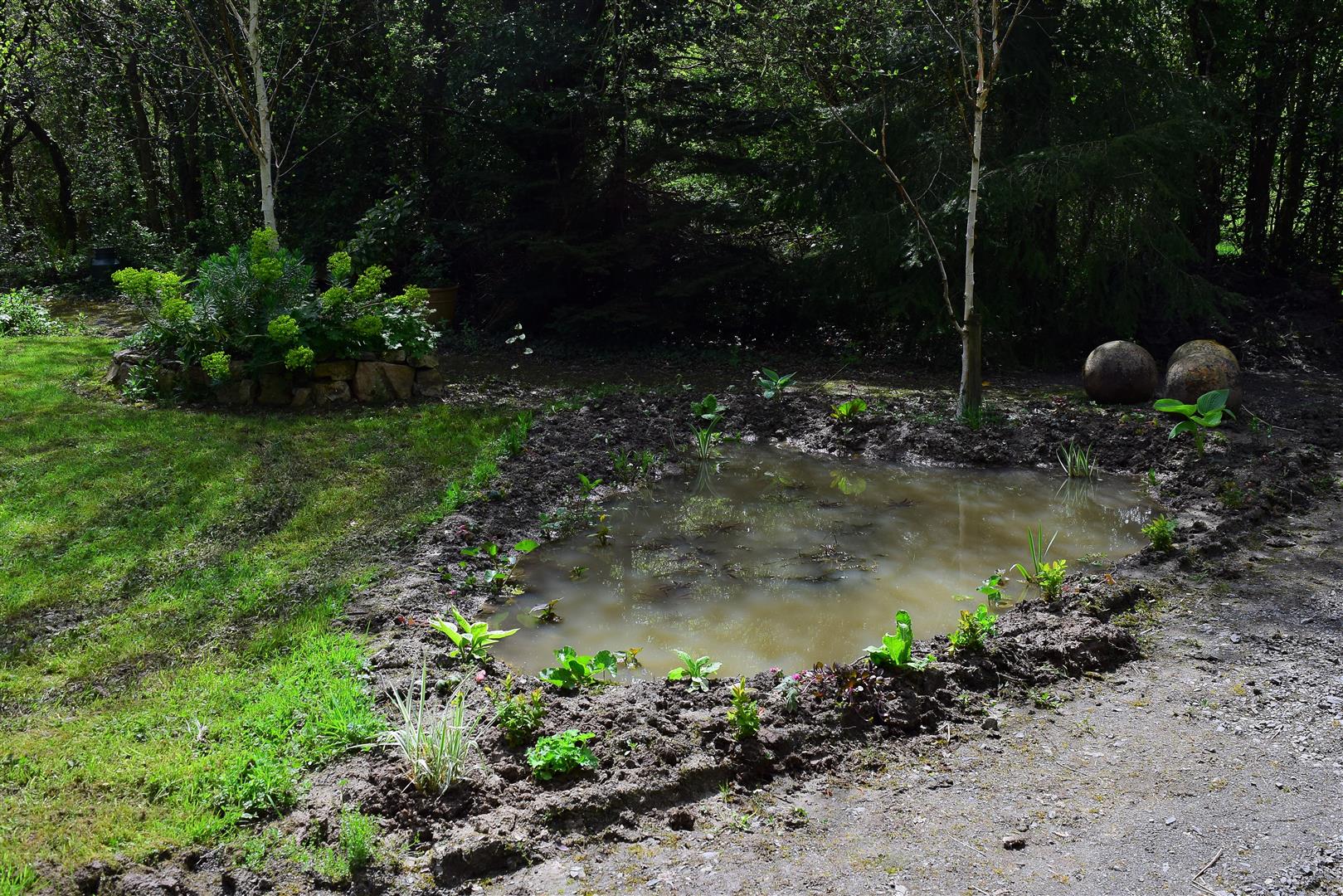 At the moment the pond looks a bit manufactured but in a year’s time it will blend in better and the water colour will clear from the current muddy colour which is caused by the fact that we covered the butyl rubber liner with over six inches of earth for a more natural look and to allow marginal planting .

In a way late April is the best month in the garden as the trees and shrubs break into leaf and two of my favourite trees , the common ash , Fraxinus , and the mountain ash , sorbus moonbeam lutescens look fabulous at this time of year . The common ash grows everywhere in Ireland , is the last tree to come into leaf and the first to lose it’s leaves and it was a sacred tree for the Celts and in our national sport , hurling , ash wood is used to make the hurley and most men of my generation carry the scars of regular belts of a hurley stick across the head and knuckles , the clash of the ash as it is called , nowadays of course you have to wear a helmet … softies !! 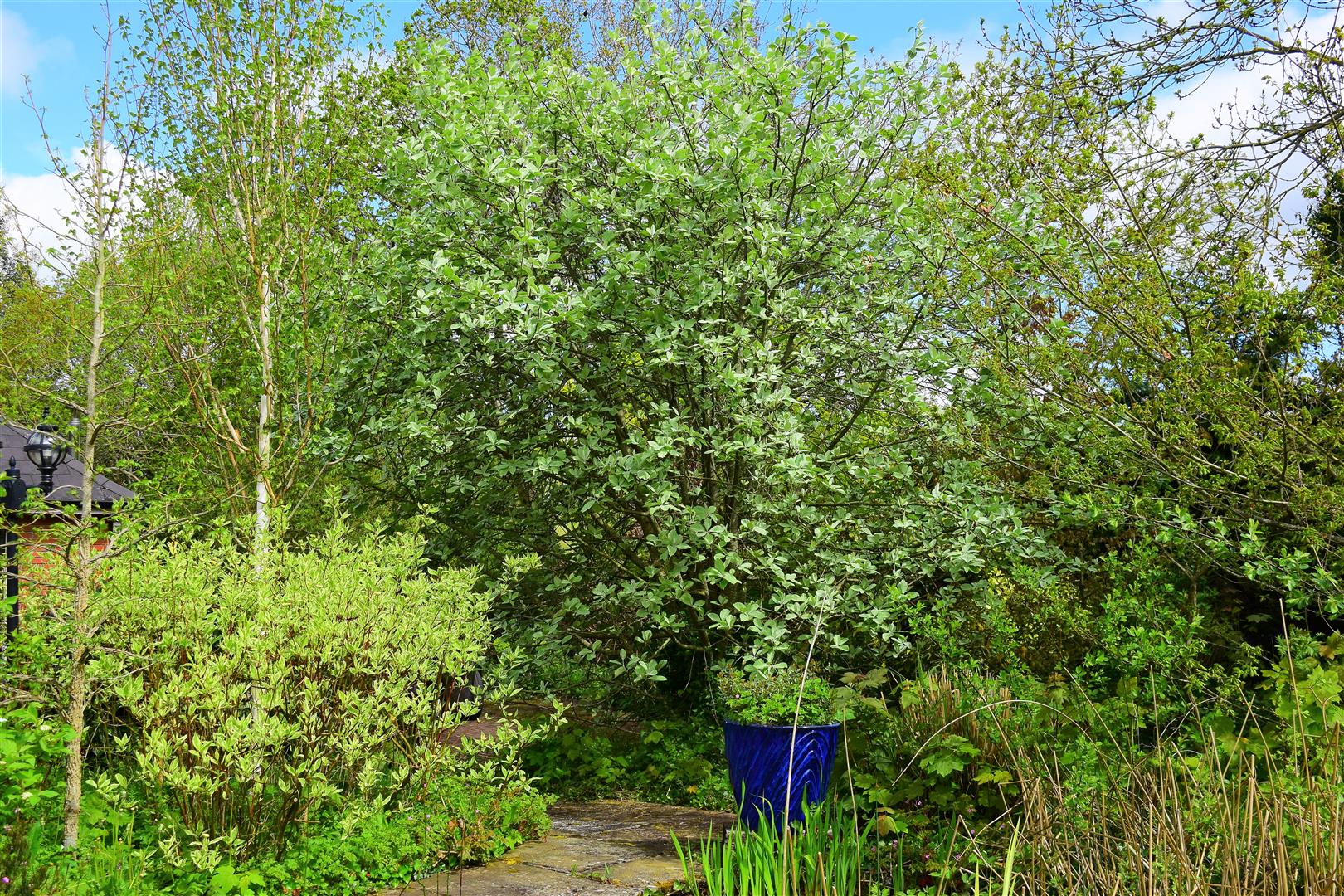 I can never bring myself to prune either of these trees as I love their leaf shape and colour particularly at this time of year when they are at their peak of freshness , lutescens is slow growing to establish and will not tolerate damp conditions but after a year or two in the ground will romp away reliably in an open position away from any overhanging larger trees wheras the common ash , Fraxinus excelsior , self seeds around the garden but always in a ditch or other dry locations , rarely where you want it and most gardeners regard it as a bit of a pest to be honest … not me though and I once wanted a forest of ash trees and planted fifty saplings in one location … and being our garden it was a wet area and none survived , the joys of gardening don’t you know or as I should have known “Right plant Right place ” but let’s not dwell on past disasters on such a fine morning , onwards and upwards !! 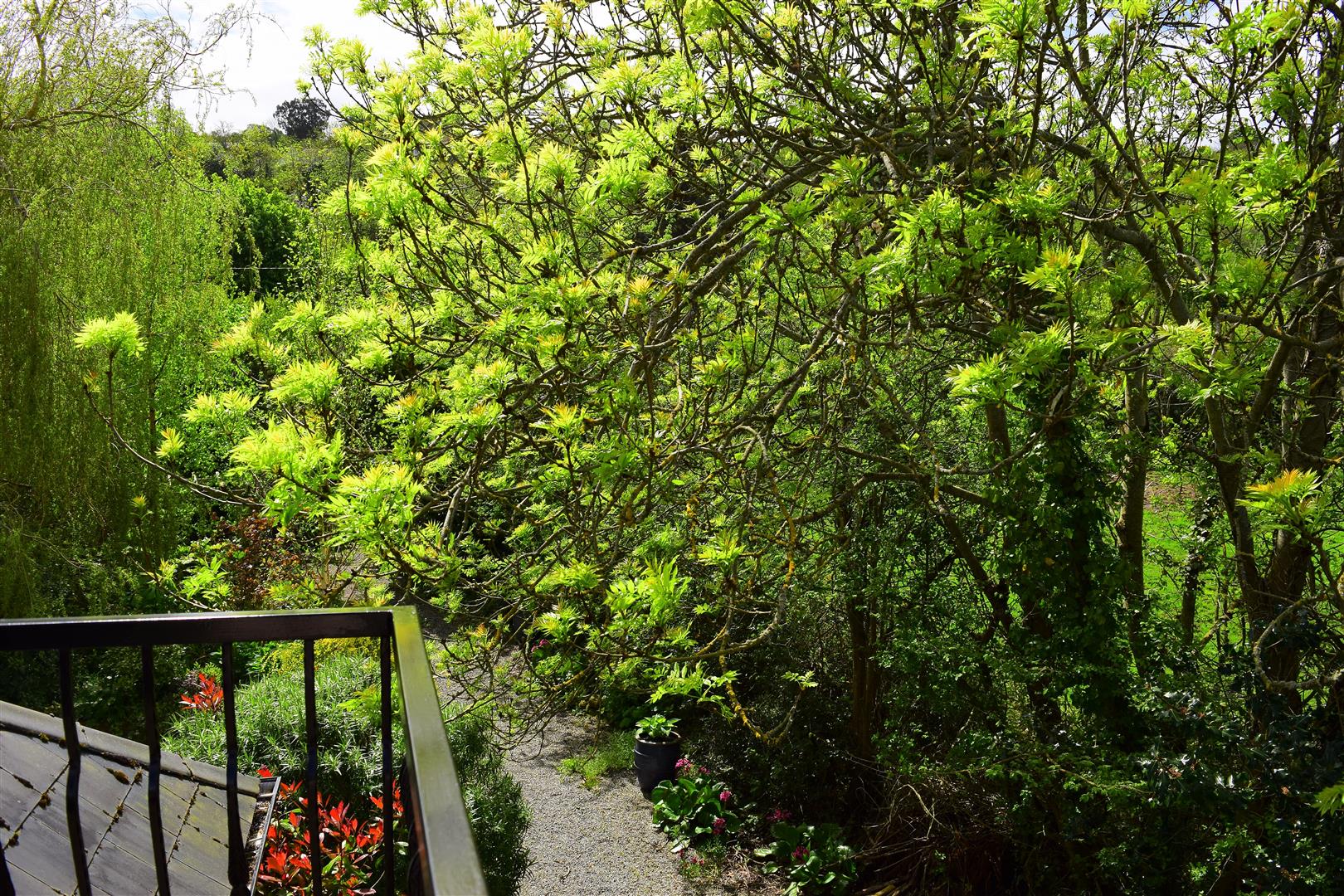 We have spent the past week preparing the garden for our first coach visitors of 2018 when a group of thirty people arrives  tomorrow , the grass has been cut ,  walkways weeded and cut back so that no brambles sneak out to snag the visitors , a lot of work but we both look forward to what will be our seventh year of the garden being open to the public  . This year our partnership with the Clonmel Lion’s Club continues and our annual Open Day for charity will be held in early August and we look forward to seeing you there ! 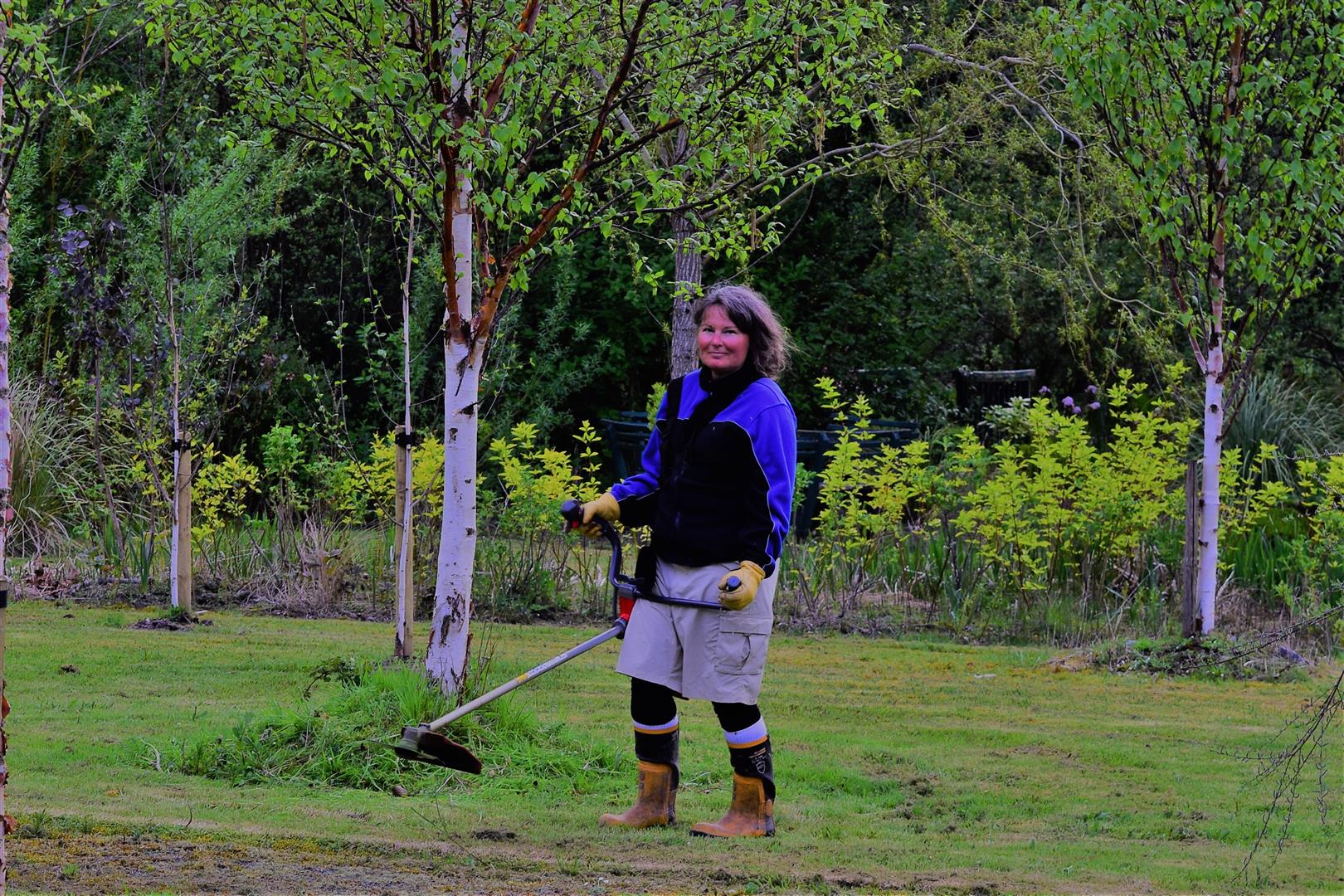 Getting ready for our first visitors , Snezana strimming in the Lower Field , April 30th 2018