I consider April to be the best month in the garden as it is the first sign after the cold and wet days of winter that everything is breaking into growth again and I love the freshness and colour and everywhere you look you see life beginning again after the harshness of   winter .

I felt the joys of Spring earlier this month with a batch of photos one morning within the space of an hour from various parts of the garden , April 4th 2017 . 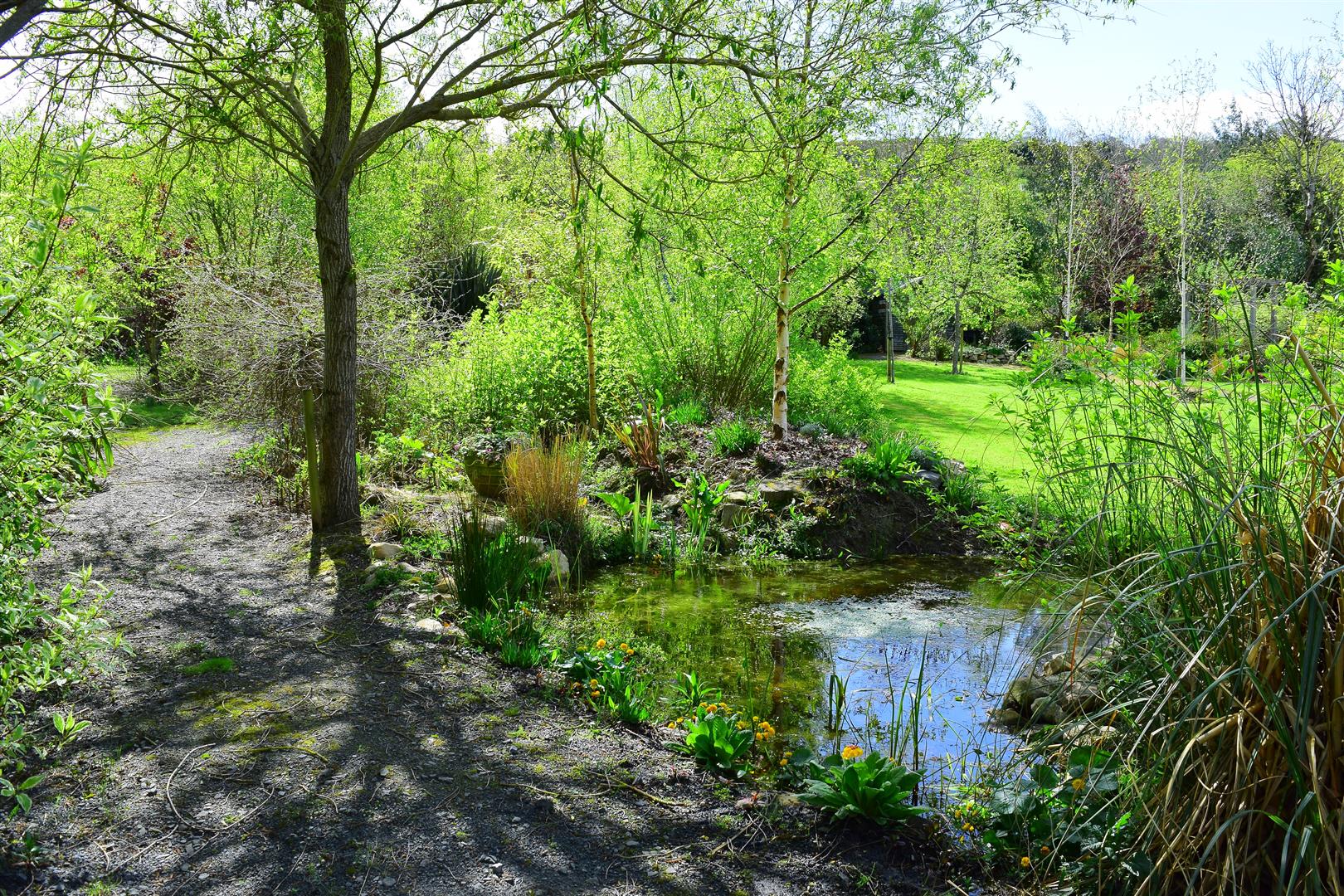 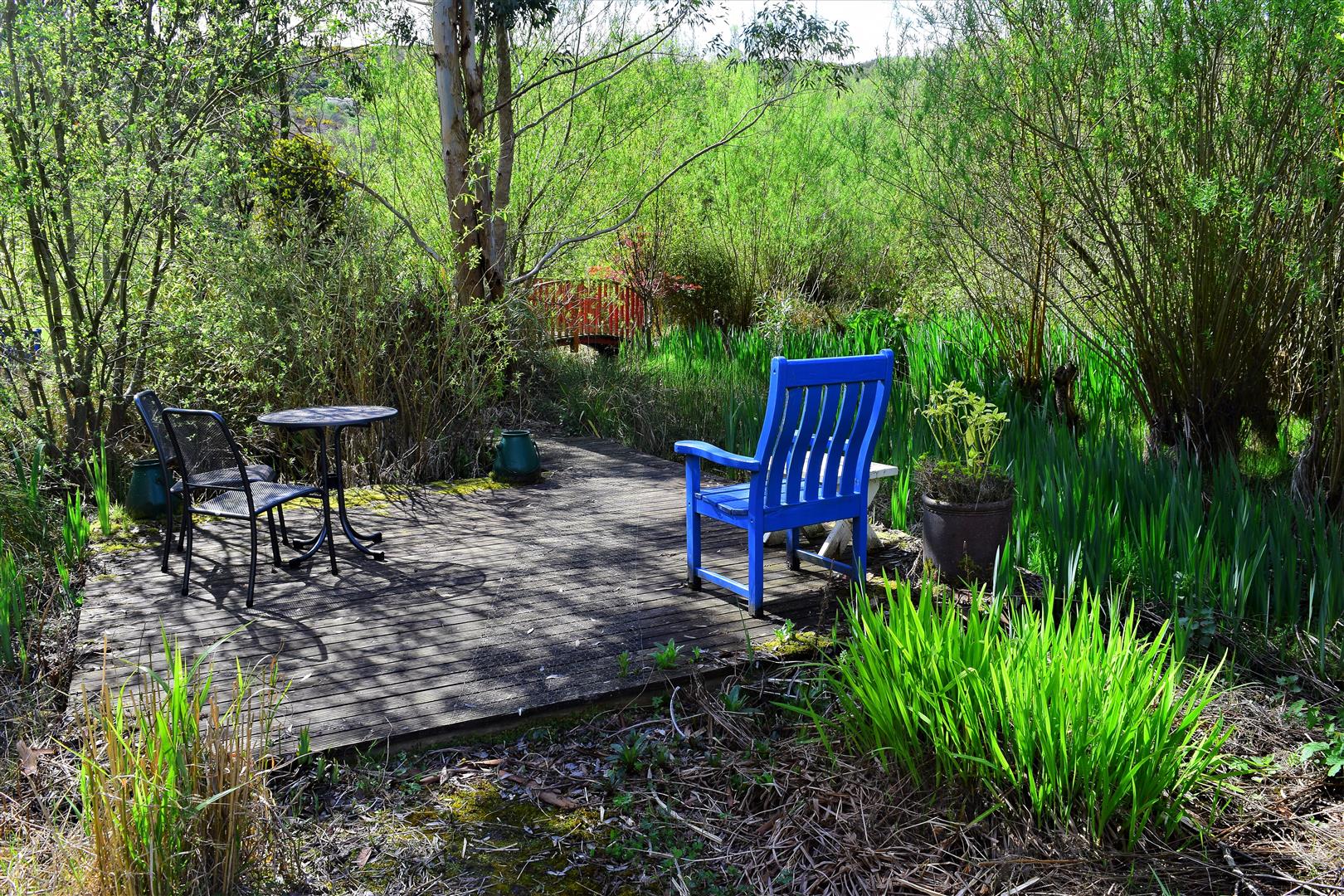 I preach a lot in my gardening blogs that I don’t go in for flowering shrubs and trees as I feel that for three weeks of flowers you usually pay the price of a pretty dismal looking specimen for the next seven to eight months however I make an exception for rhododendrom and every garden should have at least one , they are not tricky to grow but one rule they have is no acid soil  so fork in plenty of peat when planting … our dampish soil doesen’t really suit them but I have by trial and error found two locations here in the woodland area where our two shrubs flower every year … not thriving size wise mind you , this one is still only two metres high after ten years in the ground but reliably blooms at this time of year and I may chance my luck and plant another specimen in the autumn . 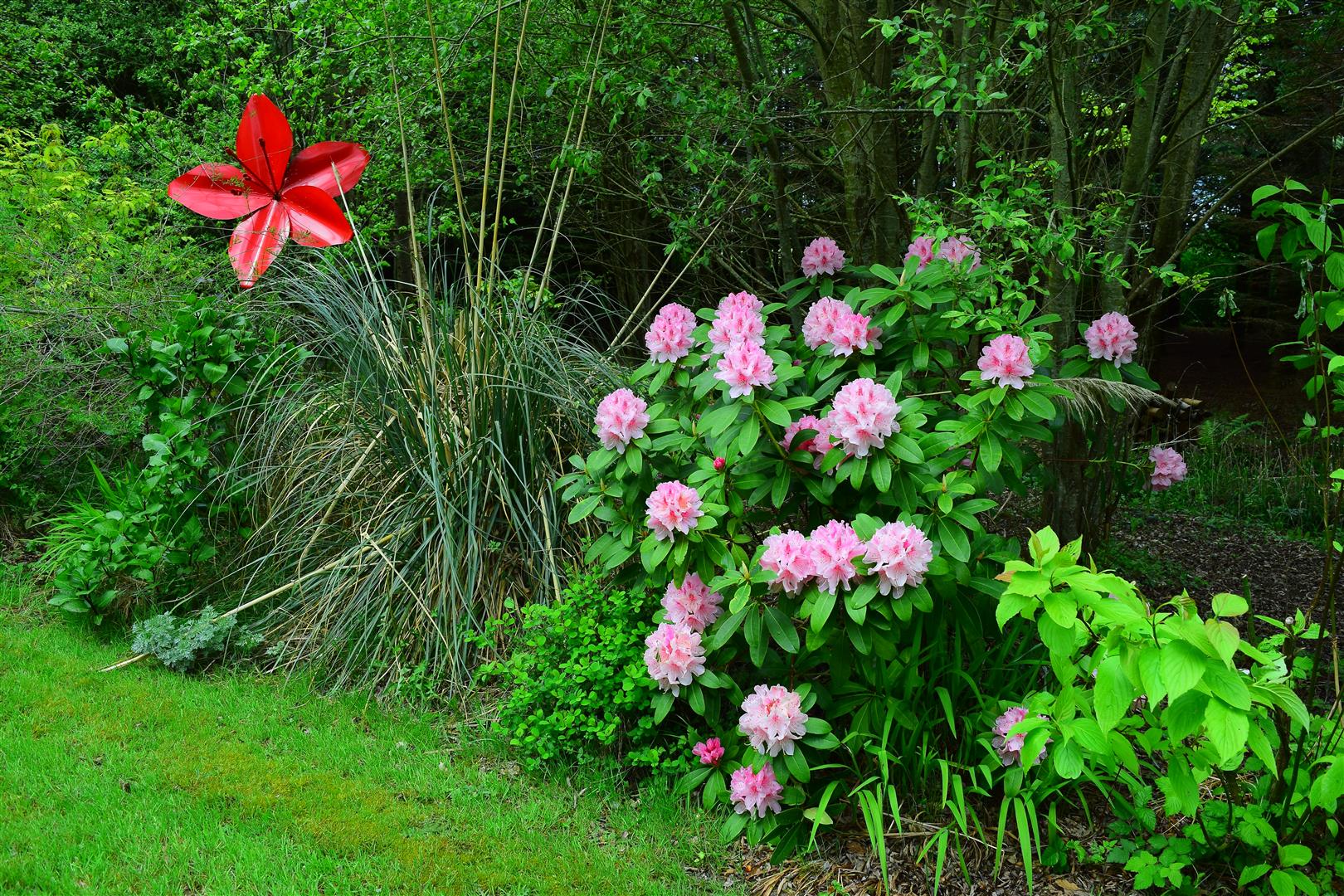 Magnolia trees have been at their best these past few weeks and like everyone I really love the blooms short lived though they are … the only variety to grow is soulangia which has the lovely tulip shape blooms and although the variety stellata is nice , it really is just a large shrub and pretty horrible looking when out of bloom which is 49 weeks of the year !  I walk past a neighbour’s magnolia soulangia every morning and the blooms only lasted three weeks and for me that is not enough incentive to grow such a large nondescript looking tree when not in bloom and at the same time I was watching the leaves unfurl on my mountain ash , sorbus moonbeam lutescens variety and to me their cream leaf is every bit as nice as the magnolia bloom with a better shaped mature tree and of course I will get to enjoy these leaves for the next six months so no contest for me which is the better tree and another bonus is that the sorbus is not as picky as a magnolia  about soil , wind or wettish conditions . 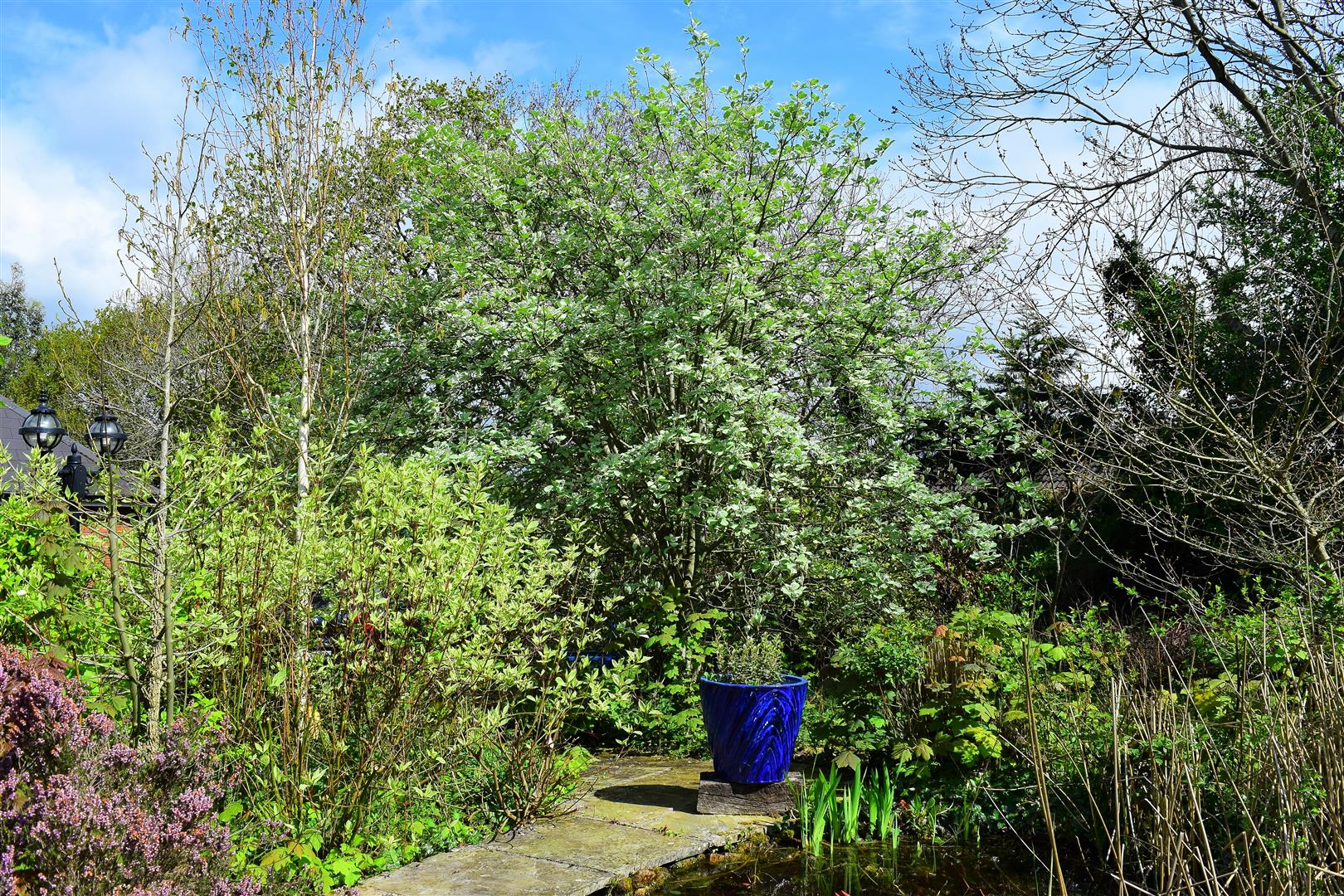 I often mention a geranium I brought back from Croatia a few years ago called geranium Biokovo , named after the mountain range in Dalmatia near a village , Gornija Podgora ,where I have been visiting for the past twenty years and looking after a garden since 2002 . From an initial planting of five plants this geranium has been divided and spread throughout the garden here and I always have at least seven pots of cuttings growing away … dead easy to propagate and although I pot up cuttings taken between November and March I get away with planting directly into the ground in a chosen location from April onwards as the soil warms up , initially the cuttings wilt hopelessly but start to pick up and grow vigorously after a week or so . I love geranium biokovo first of all for it’s association with Dalmatia but it is a fabulous ground cover plant , evergreen with a fabulous woody smell when you rub the leaf between your fingers and in the lower garden for the past year I have been filling in beds of it around the planting of silver birch trees where the luxurious green leaf of the geranium contrasts well with the white bark of the silver birch . 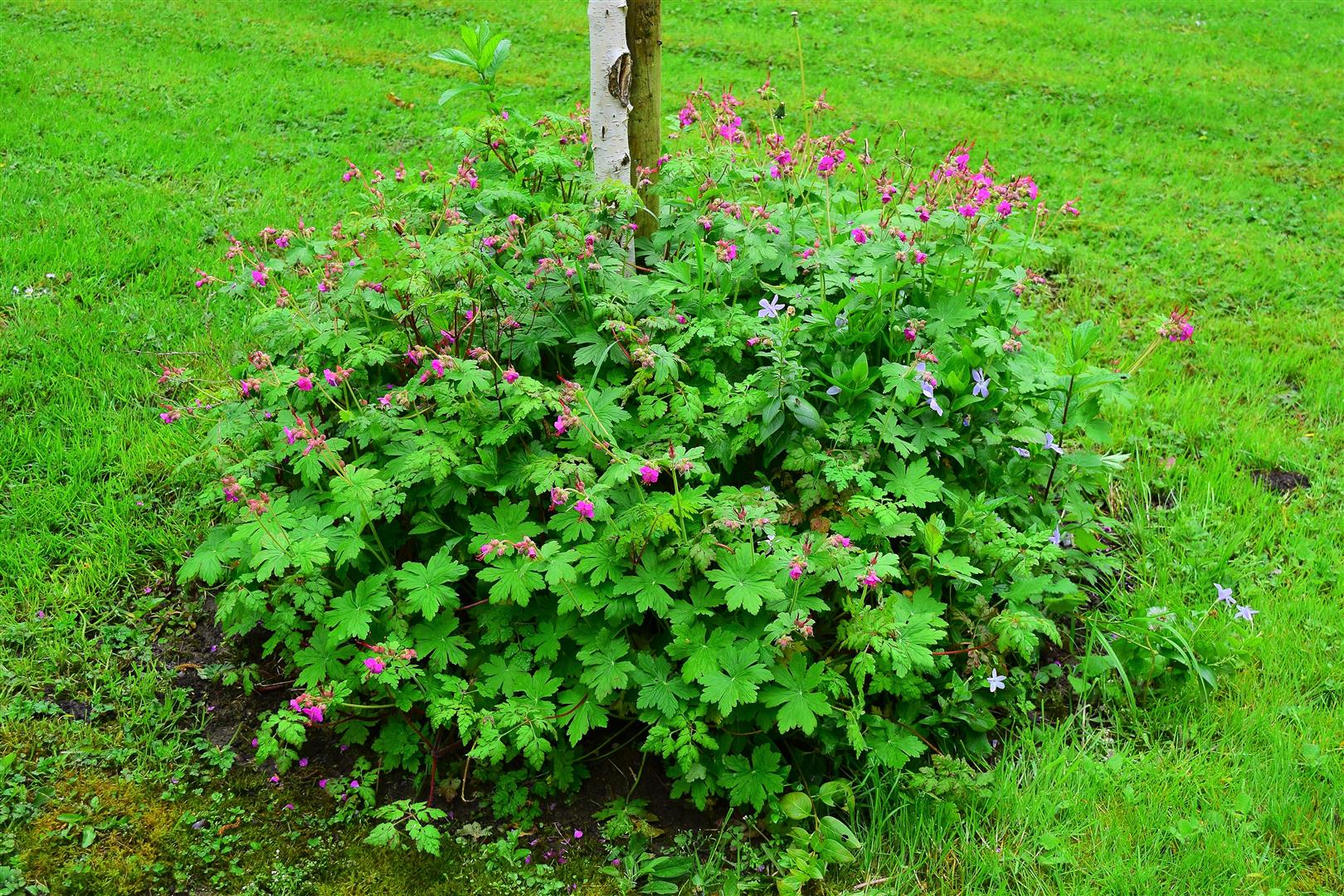 Geranium Biokovo variety , planted July 2016 as cuttings around base of a Silver Birch in Lower Garden

And the latest batch of cuttings from four weeks ago planted out today April 30th 2017 . 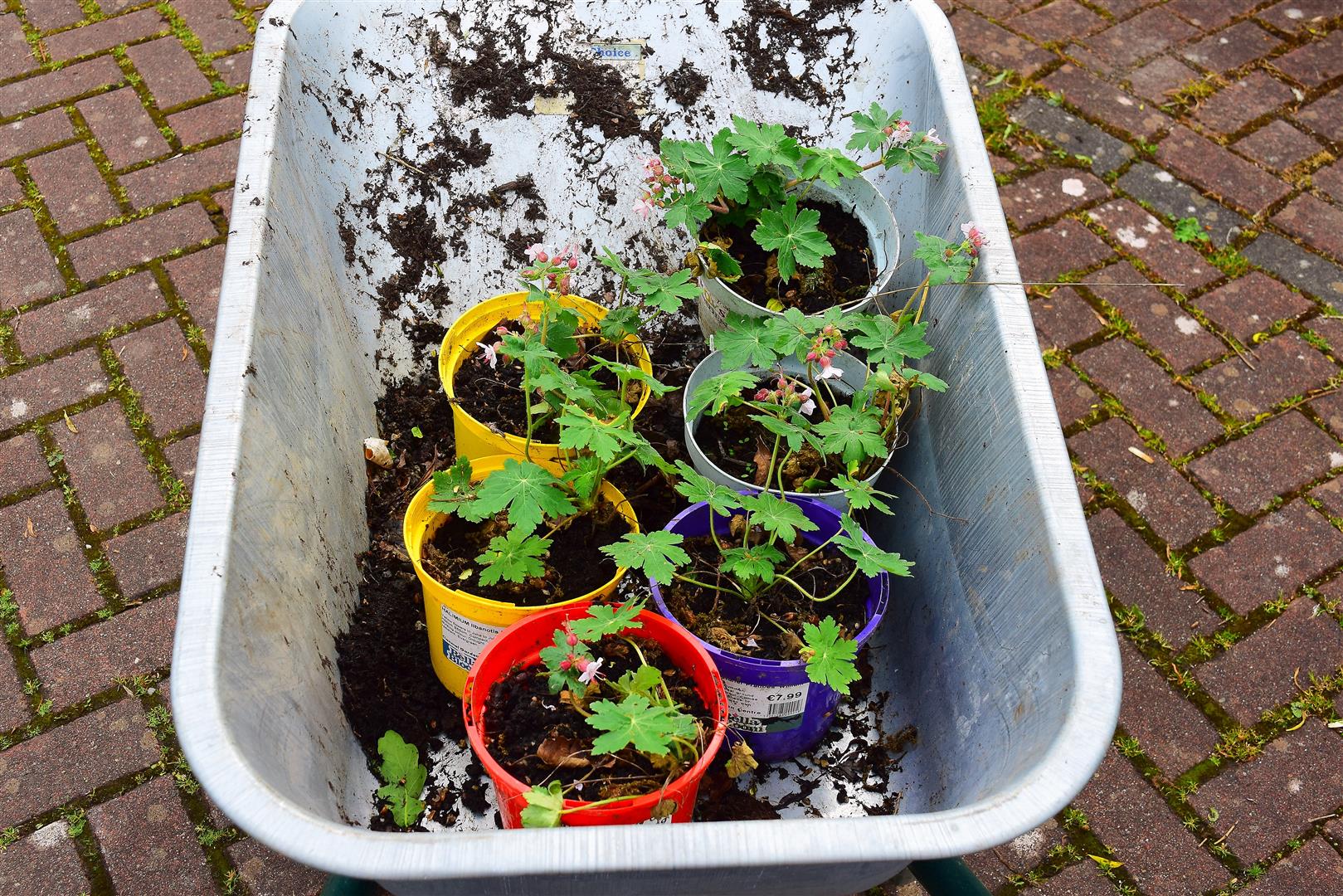 A gardening article over Easter listed a perennial plant new to me , petasites japonicus and gave as it’s common name the giant butterbur and what intrigued me was the statement “ if you like hostas you will love this plant … well I love hostas so I immediately started to research the giant butterbur and the accompanying photo  solved another gardening mystery for me as on the outskirts of Clonmel near the river on a busy main road  since  I returned to live full time in my home town  I have noticed a giant weed growing in woodland but never until now did I have a closer look and yes it was the giant butterbur  and today armed with a bucket and spade I dug up ten plants and they are now hopefully going to colonise our stream here in the Lower Garden .

And on the subject of hostas the US gardening world has over the years taken this perennial to their hearts and have bred about two hundred new species mainly of the larger leaf varieties but being American and brash there is nothing subtle about the names given to these new varieties , BIG Daddy , BIG Boy , WIDE Brim while in Europe we have discreet names for the large types , Francis Williams , Empress Wu and the timeless Elegans … no surprise that the land of the Big Mac and the Whopper have gone about renaming the hosta with gusto !!

I rarely feature climbing plants in my garden writing mainly because I don’t grow a lot of them as they are a poor return with a fantastic show of flowers for three weeks then you are looking at nondescript plants for seven months  but there are some exceptions and an absolute favourite of mine is wisteria which has fabulous blue or white flowers but then also has nice foliage after the flowers fade but you have to wait for five years after planting generally for wisteria to flower and after that it gets better each year and there is something about a classic purple wisteria in full bloom that makes gardeners go Awww ! 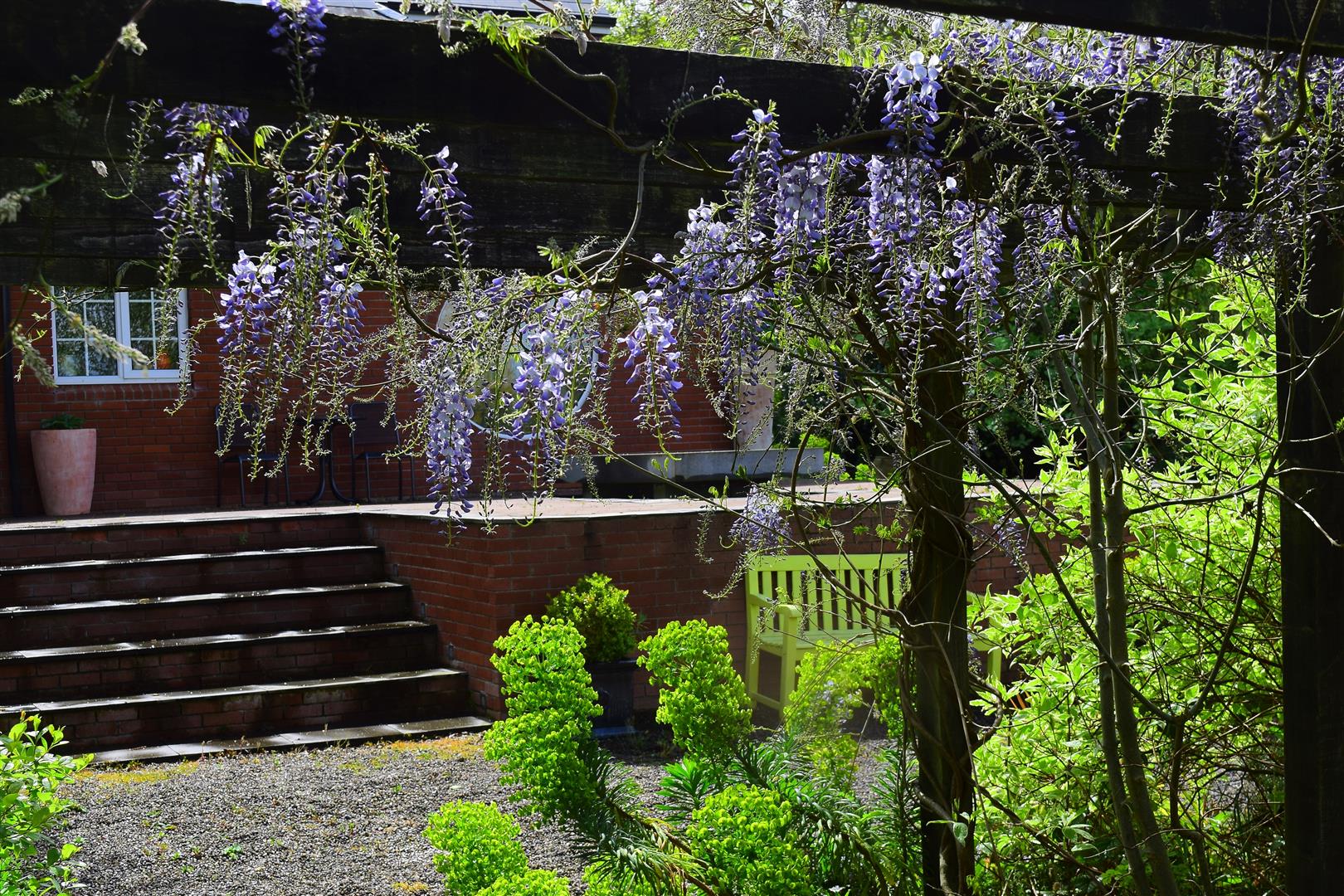 Wisteria about to break into flower , Back Garden , April 30th 2017

I also use a climbing rose called rambling rector but this has vicious thorns and you need to keep it away from pathways as it is dangerous for visitors , a vigorous grower but to be honest I wouldn’t plant it again unless on a ditch where it can’t take your eye out . I grow two other climbers , solanum also called the chilean potato plant which shoots up quickly over a pergola , has nice leaves and a brief show of blue flowers and my last recommendation is the virginia creeper , slow to get going but lovely autumn colour and great coverage once it gets going after a year or two . I don’t bother growing clematis as I find them unreliable in this garden and I am not the only one to find them unrelable … I remember once at a talk Helen Dillon gave where she started with a list on a blackboard of about fifty clematis which she said was a list of clematis that had died on her ! The dreaded word where clematis is concerned is clematis WILT and this can happen at any time with a clematis where for no apparent reason it just ups and dies and this is before we get into the complex world of clematis pruning as the regime for spring flowering clematis is different to the summer flowering varieties … don’t go there !

An unsung plant in most gardens is the purple berberis  which it looks great , doesn’t need molly coddling or pruning and will happily grow in most conditions and this one in the Lower Garden I planted about ten years ago in front of green conifers for contrast  and basically forgot about it until suddenly it is almost three metres high and wide and I am delighted with it although Snezana absolutely hates the shrub because of the thorns and of course as with all throny plants you need to take care around it . I suspect that because she is not full time in the garden she forgets about the berberis until it catches her as apart from the thorns it is a great addition to any garden and if you don’t have space there is a small compact variety called Tom Thumb . 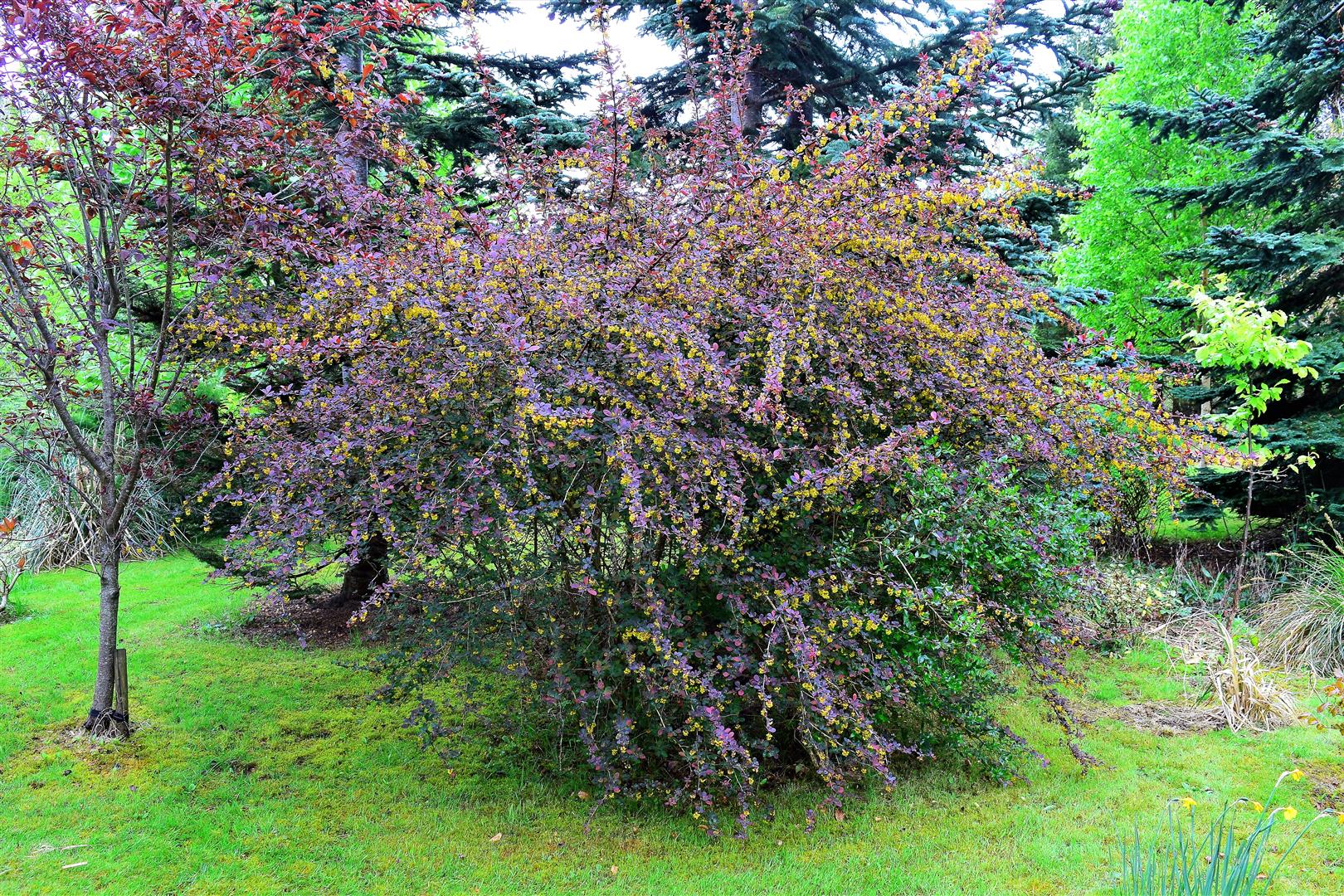 Now stop reading and get out in the garden !!