Visitors to the Garden this week 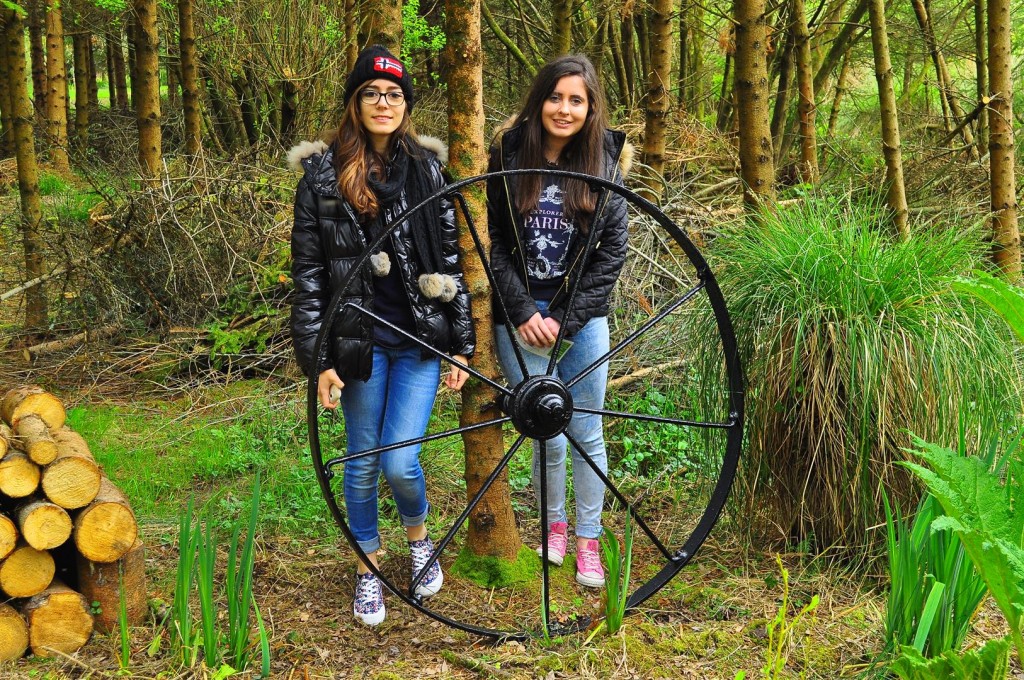 Camille Boisson and her friend , Claire from Marseilles , April 23rd 2014

The May burst of growth is almost upon us when suddenly everything in the garden takes off whoosh and I really believe that this is the most magical time of the year in the garden when the dark gloominess of winter is finally gone and you see the fresh new growth everywhere . 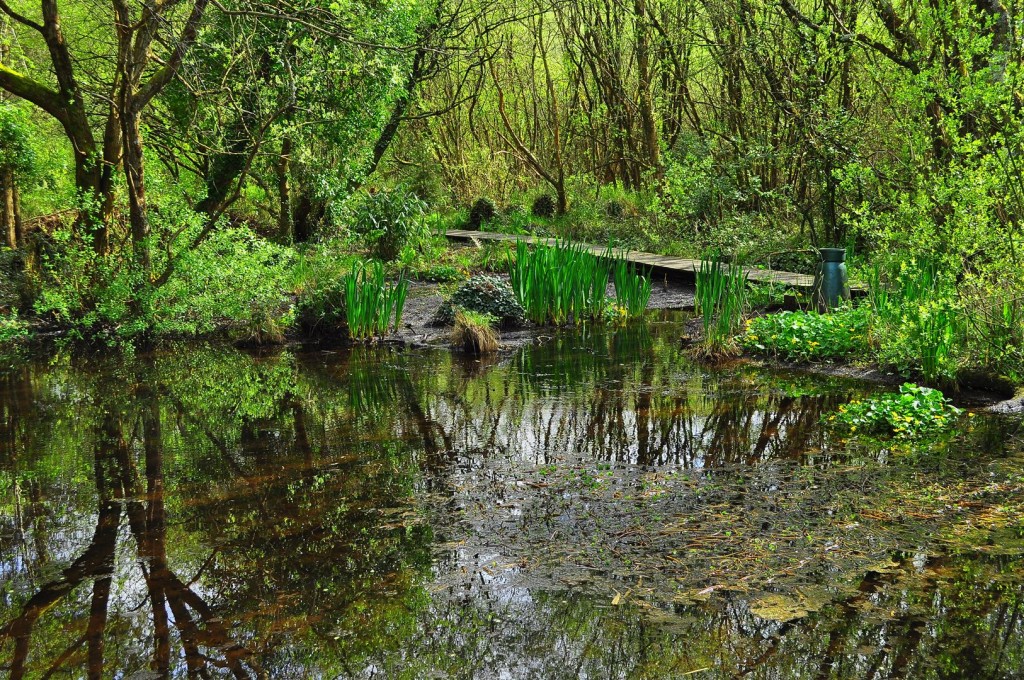 Just now the clumps of giant gunnera , as they unfurl their leaves  and start to grow to their eventual height of over two metres , are one of  the most dramatic sights in the garden and have burst through the protective covering of last year’s leaves ( which I fold over the crown of the plant in late November to protect against frost damage ) and a gunnera in full growth gives a touch of the Amazon to any garden ! 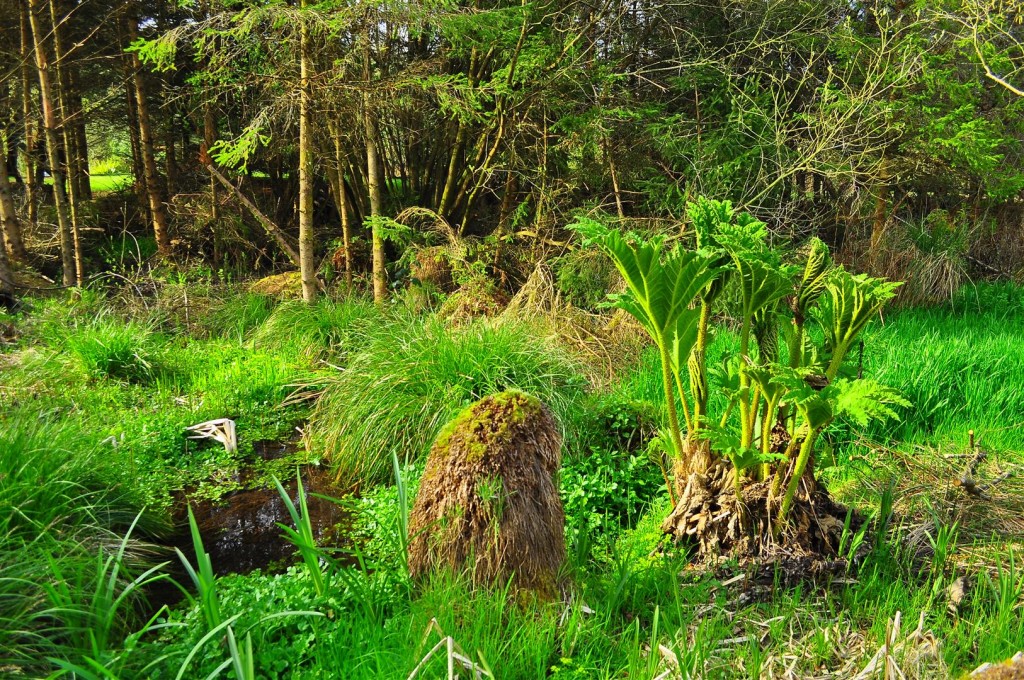 A Gunnera in the swamp garden April 2014

Gunneras have no predators and like moist boggy conditions  where their roots can reach out to water but the plant itself needs to be planted away from water and does not like getting it’s feet wet i.e. permanently water logged .

Caltha palustris , the marsh marigold , is another fabulous plant in flower at the moment in wet boggy areas and or beside water which is it’s natural habitat . The garden version is one of the few water marginal plants awarded the Royal Horticultural Society’s ACM , the Award of Garden Merit and it is for sale in most garden centres as an aquatic plant at the moment . A plant is described as a marginal when it can be grown either in shallow water at the edge of a stream or in a pond and I have it growing both completely immersed in water in a pot and also planted into the banks of a stream where it does equally well but personally I prefer it growing in mud just out of the water as it clumps up better and of course it’s growth is not limited to the size of the pot  . 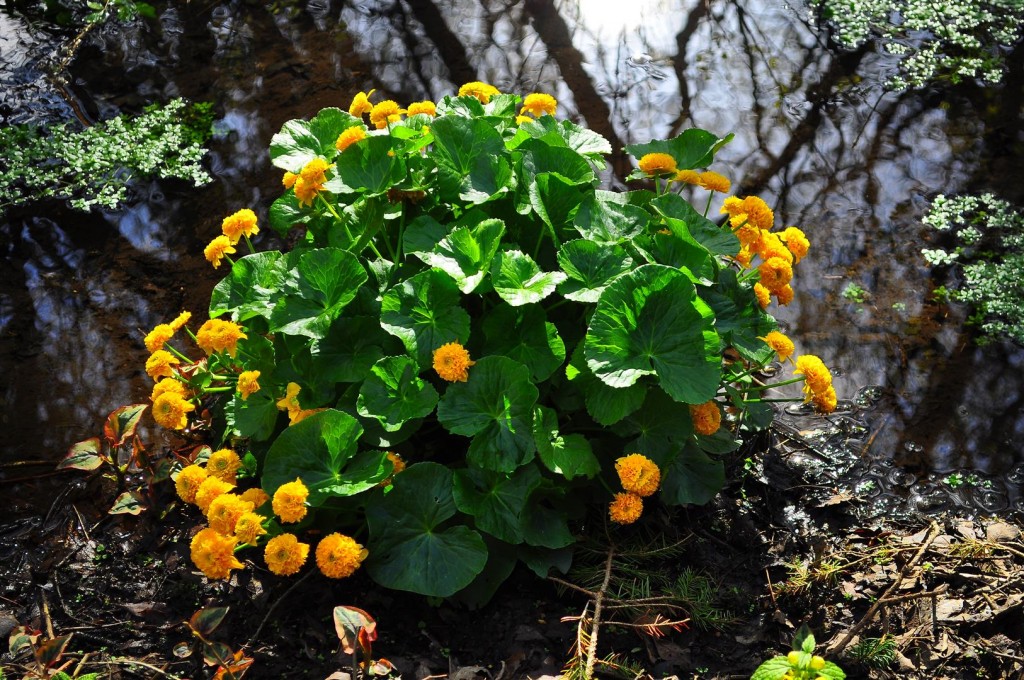 Caltha is easy to propagate by pulling a clump apart just after flowering and each piece will double and treble in size in one season … and keep growing each year , so once you buy one caltha you can increase your stock each year , it is evergreen and looks good even when not in flower but when in flower … wow … it is a show stopper and I include some photos taken this week !

There is of course a wild version of the marsh marigold which can run riot in boggy wet ground and although the flower is similar in both the wild and the cultivated version of caltha , the wild plant does not grow into a clump but spreads out agressively into a real thug over marshy ground so is not a plant for a small garden …. beautiful though . 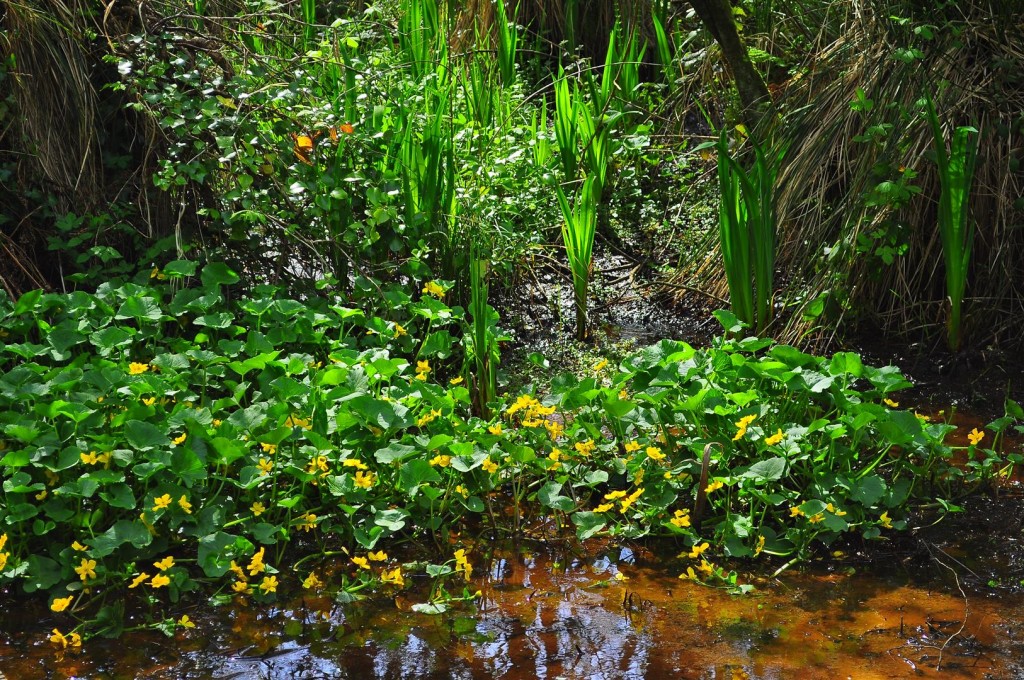 The wild Caltha or Marsh Marigold in the Wet Garden , April 2014

Another emerging foliage plant just now is the Hosta and there are a million or so slugs in a queue around every hosta clump in the garden complete with napkins around their necks and knives and forks at the ready for some prime rib eye hosta ! Monty Don and every eco gardener will give you all sorts of remedies to protect your hostas from slugs ….. copper filings around the plants , gravel , beer in bottles ….. listen carefully … I will say this only once ….. none of these eco methods work and the slugs get fatter and your hostas have tattered leaves for the entire summer ….. slug tox pellets are the only true protection but you have to get to the plants just as the first tips are peeping out of the soil ….. shock horror and even hisses are my usual reception when I mention slug tox blue pellets BUT I have lovely intact  hostas !! 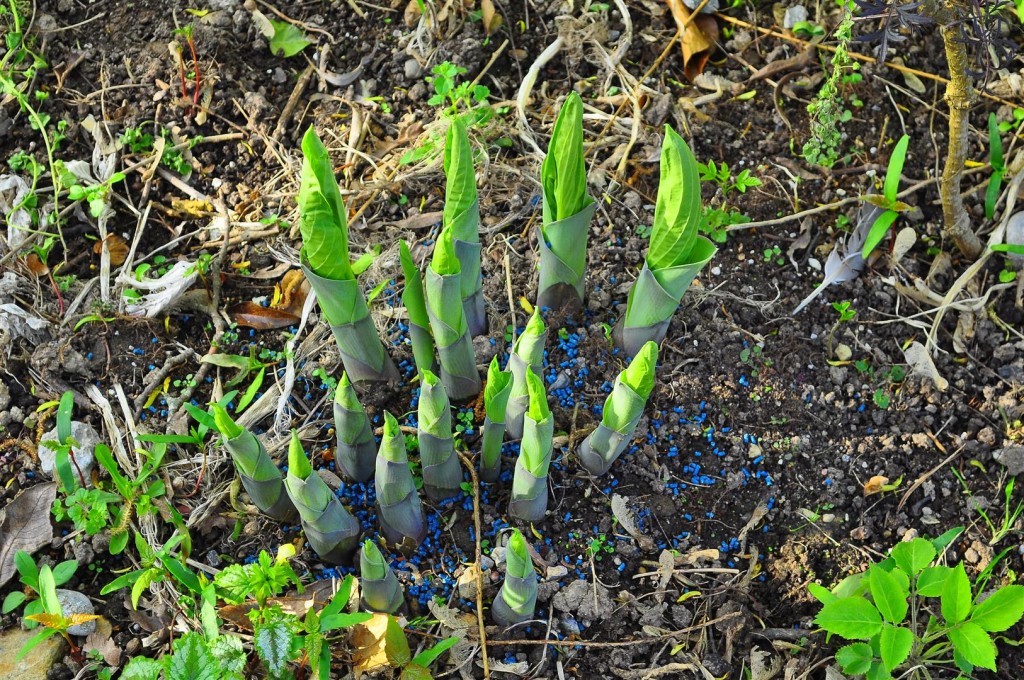 I must admit to being fairly paranoid about slugs eating my hostas but I have been in several gardens in the past week , Mount Congreve , Mildred Stoke’s garden in Killurney , Mary Donovan’s garden at Fairy Hill , where there are substantial areas of hostas none of which are protected by slug pellets and both Mildred and Mary adopt a relaxed attitude to the threat from slugs and yet their hostas seem to be thriving . It appears that slugs don’t like the tougher leaved hostas such as sieboldiana ( variety Elegans, Empress Wu etc. ) so that may be the key … yet I only grow these varieties and if left the hostas untreated the slugs eat them to the ground so perhaps the fact that our garden has so many wetland areas may attract the slugs in the first place … so the annual debate goes on … to wage pellet war on slugs or not . I also grow hostas in large pots in shade which I water well and feed every week with a liquid fertiliser and the slugs tend to leave these alone especially if in a tall pot , I still protect these plants because if just one slug climbs in then hasta la vista hosta ! 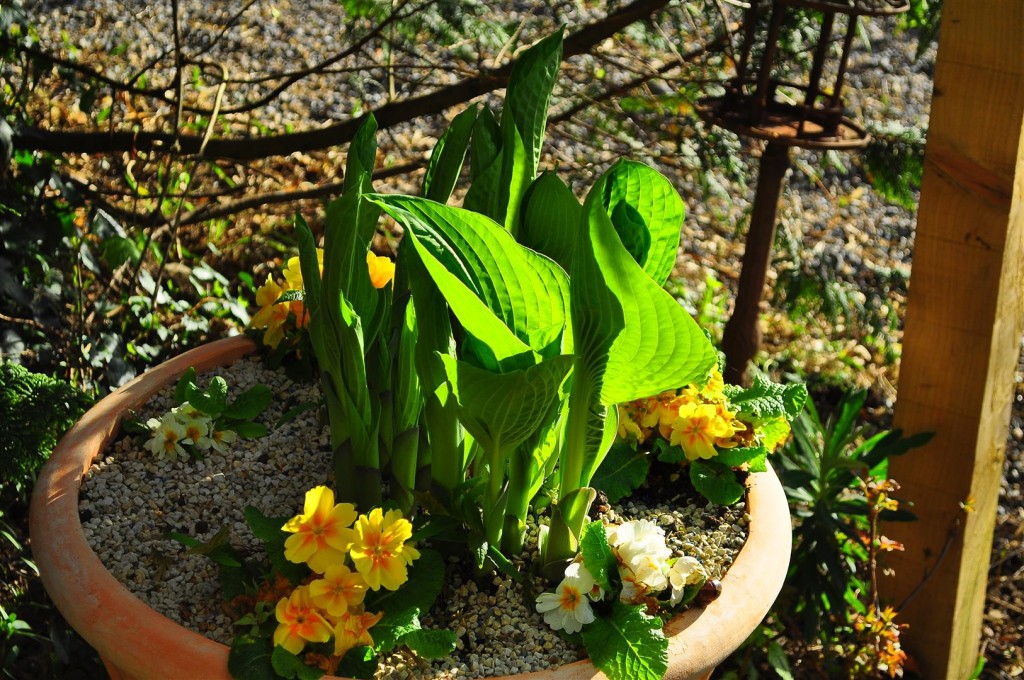 We have cleared another patch of brambles that has opened up a nice woodland space which after we cut and burned off the brambles turns out to have nice soil and a sheltered shady position behind a three year existing shrub bed and I intend to plant it up with some woodland shrubs which likes the existing conditions . Already I have put in a sambucus nigra ( the black elder )  a copper beech and an eleagnus variety limelight , a few pieces of bamboo cut off and transplanted from a mature clump elsewhere in the garden  and also added some aucuba japonica , a terrific plant for dry shade … normally in sunlight the aucuba can have a golden brassy leaf which I don’t like but in shade , especially  deep shade  the aucuba leaf is a very nice deep green with subtle white speckled dots as you can see in the attached photo of a nice specimen in the front garden . 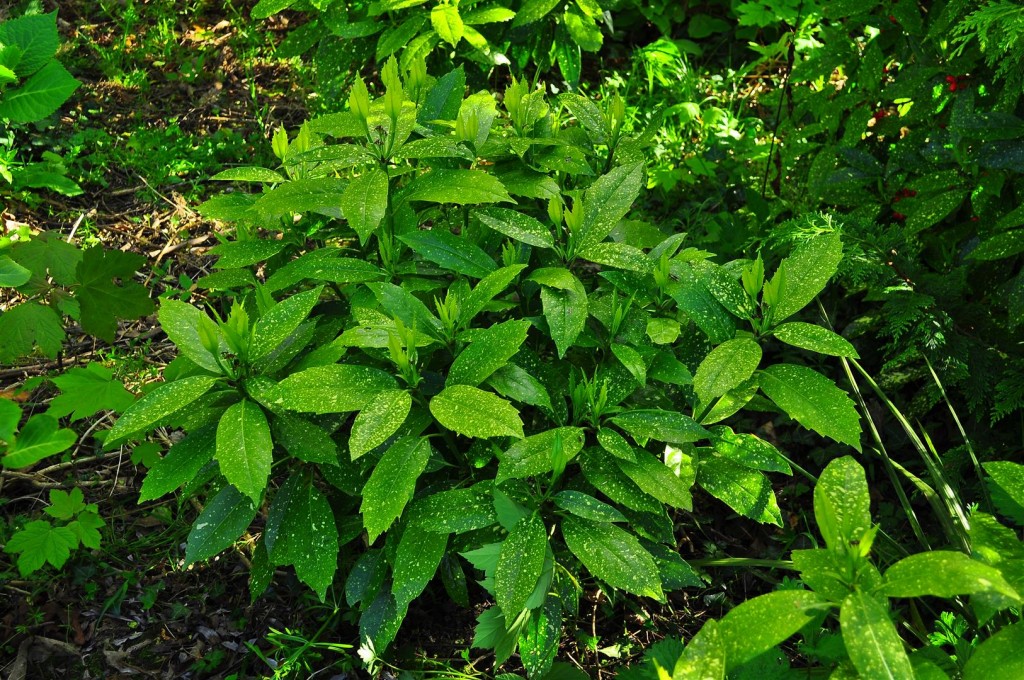 The garden centres like all business’s these days are conscious of the economic downturn and are trying to reduce the cost of plants where possible and one way they are doing this is by producing smaller versions of perennials so you can now buy a plant for a reasonable price which in a year’s time will have grown into a lovely specimen and the extra year will allow you an opportunity to see if it likes the location and what other plant you can theme it with and the reduced cost will not break the bank  .

Clonmel Garden Centre at Glenconnor have a fine range of such perennials at the moment , four plants for ten euros and I have been stocking up on plants I would not normally splash out on at full price as I am not sure they will do well here but at this price it is worth a punt .

Bergenia is a plant not to everybody’s taste with its leathery leaves but I like it for its all year impact and it will grow virtually anywhere , dry , mud , shade and is an ideal plant for a difficult place  . It grows best though in normal soil in good sun , the variety I grow is the largest leaf , variety Elephant Ears , petite it ain’t as you can guess from the name  and as you can see from the photo when it flowers as it is now in April , it is lovely . 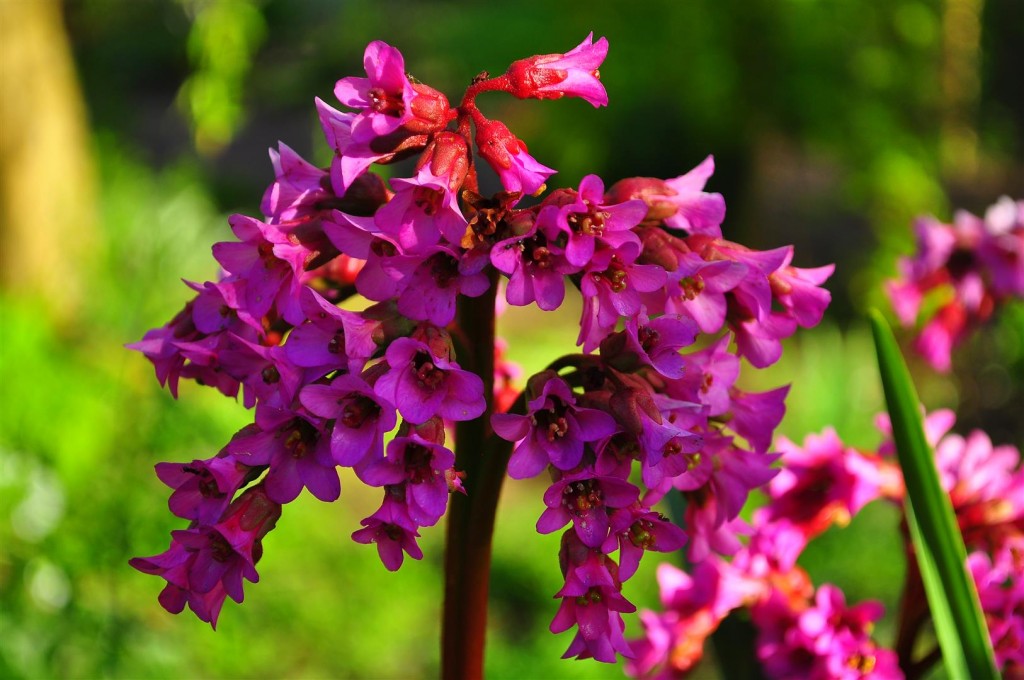