Bear in mind that my personal style of gardening is “ wild “ gardening and that I like to maintain my garden just at the edge of going over into  wildness and my choice of plants , shrubs and trees reflect this . I am not into flowers  or flowering shrubs as such as I find them too limited in what you get back over a long period and my view is that if my chosen tree or shrub flowers then that is an added bonus but it will not be selected on that basis .

I love big leaved dramatic foliage plants such as gunneras , hostas and rodgersias as they add structure and interest to the garden while giving that wild exotic look .

I used to love New Zealand phormiums  and cordyline trees and they were the first plants in almost every planting scheme of mine over the years but like everyone else I lost all of them ( over 50 phormiums alone ) in the two hard winters of 2010 / 2011 and would never trust their hardiness again .

Perenials — Gunnera ( giant rhubarb ) , big leaved  grey/ green hostas ( siboldiana elegans & francis williams variety ), Darmera ( chinese rhubarb or umbrella plant )   , rodgersia , crocosima aka montebretia , heleborus corsicus but the olive green leaf colour variety as it looks great throughout much of the year , euphorbias particlulary the variety characais which is almost a weed in its native Mediterranean but is a fabulous all year round foliage plant with our climate , any mischantus grass , giant purple fennel, acanthus both the spiky spinosa variety and the normal leaf ,

One of my favourite plants for all year round display is euphorbia wulfeni which is the largest of the euphorbias . The first time I saw this plant was in the 70’s when I read my first serious gardening book , the Reader’s Digest Gardening Year and saw a photo of a grand big house garden and there growing out of the middle of some granite slabs on a patio  was this  glaucus green leafed plant with golden bracts  which was described as a statuesque foliage plant and I was hooked immediately . Had no clue what it was and any garden centre I asked had no clue either but a few years later at a garden plant sale for a local charity sitting on a trestle table was a 5 inch seedling planted up in a paper cup and the old lady who had donated it from her garden told me it was euphorbia wulfeni !

From that one seedling I populated my then garden in Rosslare and it now self seeds itself everywhere in this garden particularly into gravel and indeed a feature of euphorbia is that like buddleias it prefers to grow in cracks of walls and paving and does not like a rich diet  . In the wild it grows all over the Mediterranean especially along the Adriatic coast of Croatia where locals regard it as a weed and wouldn’t have it in their gardens which just proves the old gardening saying that a weed is just a plant growing in the wrong place . There are all sorts of cultivated euphorbias for sale now  in garden centres and gardeners are spoiled for choice with dwarf ones and even variegated versions  with  the trend  for smaller plants as people don’t have space in their gardens   but for me the large euphorbia wulfeni is still the best . 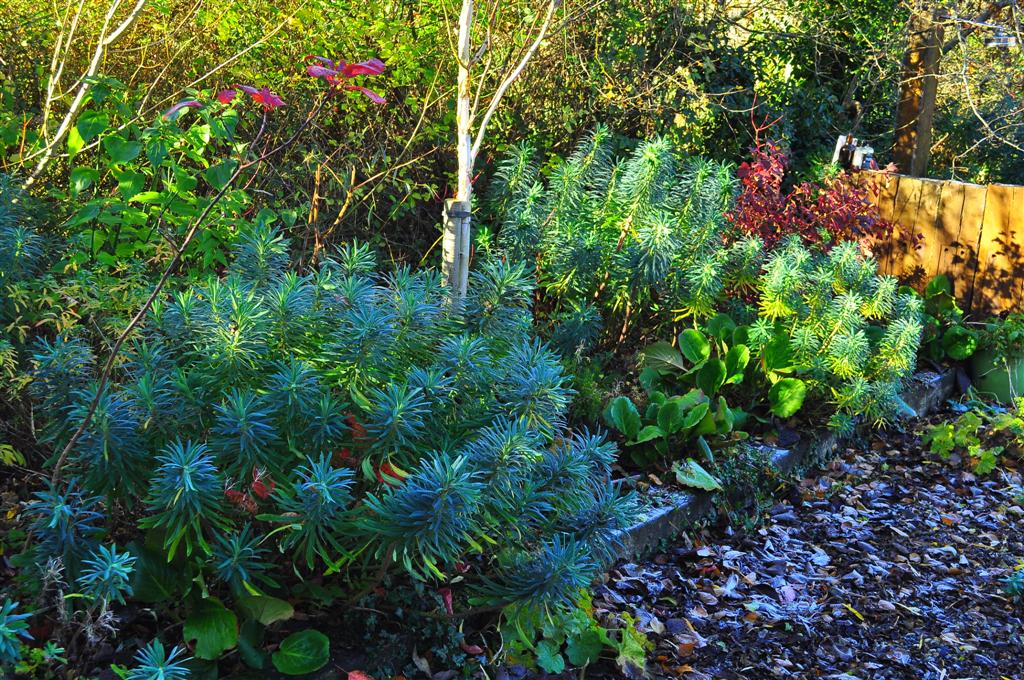 One Response to Favourite Plants