Now that Summer is here or at least Winter has passed gardeners are feeling optimistic and their thoughts are turning to having one last attempt at growing that tender perennial / tree / shrub that logic ( and past experience ! ) should tell them is just not possible in our climate ….. but gardeners always hope and like the iconic  “ Next Year in Jerusalem ” for the Jewish People , with gardeners it is  Next Year a Tree Fern !

Tree Ferns are fabulous …. in other people’s gardens ….. where they will feed it , water it ( tree ferns are difficult and fussy about almost everything ) and wrap it in a fleece jacket for the winter and still have to worry it will make it through to April ….. many don’t which is why I don’t attempt to grow one although I was recently tempted at Kilcoran Garden Centre where Mary Skelly has some terrific specimens at 25 Euros each , a bargain at that price given the size and healthy state of these ones and a friend threw caution to the win and bought five …. good luck Margaret !

Aside from tree ferns , each plant , not you , will decide if it likes it’s planting location and there is no set rule … I was reminded of this today when checking on the state of some euphorbia plants , self seeders , that I moved during the winter and while some took off others in the same area just popped their clogs …. might be a minute difference in wind position or just a variation in soil and as I said the plant will decide , not you .

The May growth surge from Nature in the garden creeps up on you and almost overnight everything is green and jumping out of the ground , at least it does in my garden which is usually kept just on the verge of wildness and as any top model will tell you , Kate Moss for instance ( yes  please !), to keep hair this side of wildness is not easy and requires almost constant attention and so it is here where I have been away for a few days and now it looks like the Amazon Rain Forest and the deer are almost calling at the back door so used have they been to roam where they like without me shooing them away …… shooo .. such a gentle sounding word while in reality with me and the deer it is more like a roar of get away you hungry f..kers …. have you no home to go to !! 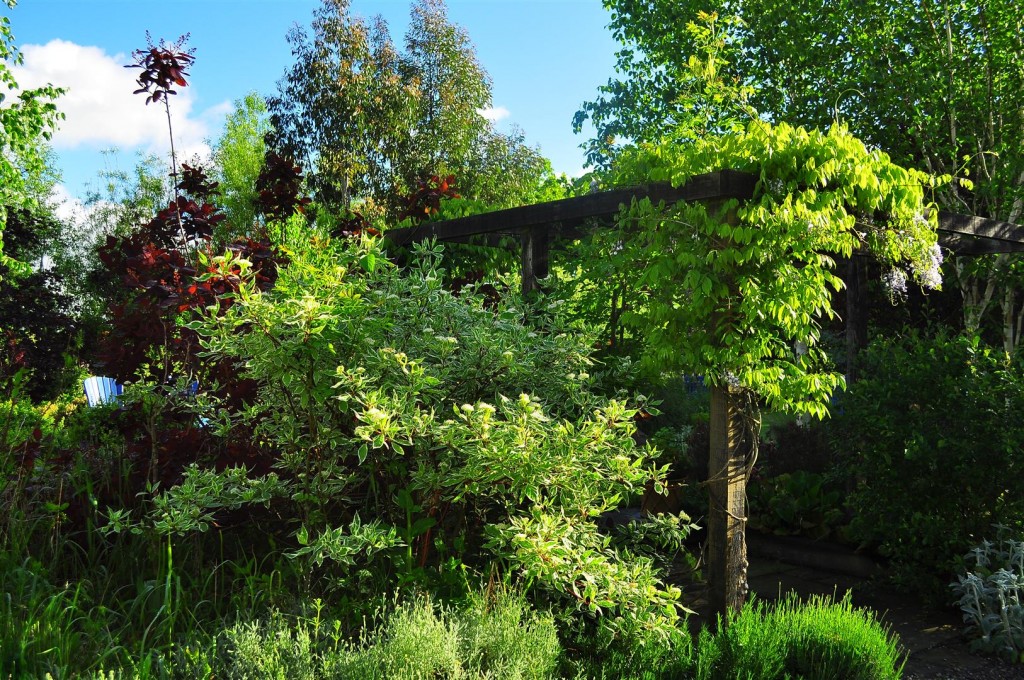 Wisteria on the pergola with Cornus elegantissimus May 22nd 2014

This wisteria has been planted five years and this is the first year of flowering  …….yes they are slow to flower but worth the wait and while you are waiting the five years for the first flower you still get to admire the beautiful olive green foliage ……. the best flowering climber in the plant world ….. Ever !

Wisteria is grown all over the world and originated in China and Japan and grows so well in the US that in some states it is considered an invasive species ….. it likes full sun and a rich moist soil and can be tricky enough here in Ireland and the UK where people are forever sending in queries to the gardening magazines asking why their wisteria has never flowered .

I photographed this wisteria shown below in Easter Turkey where it grew across an old disused  door and probably never saw a drop of water ! 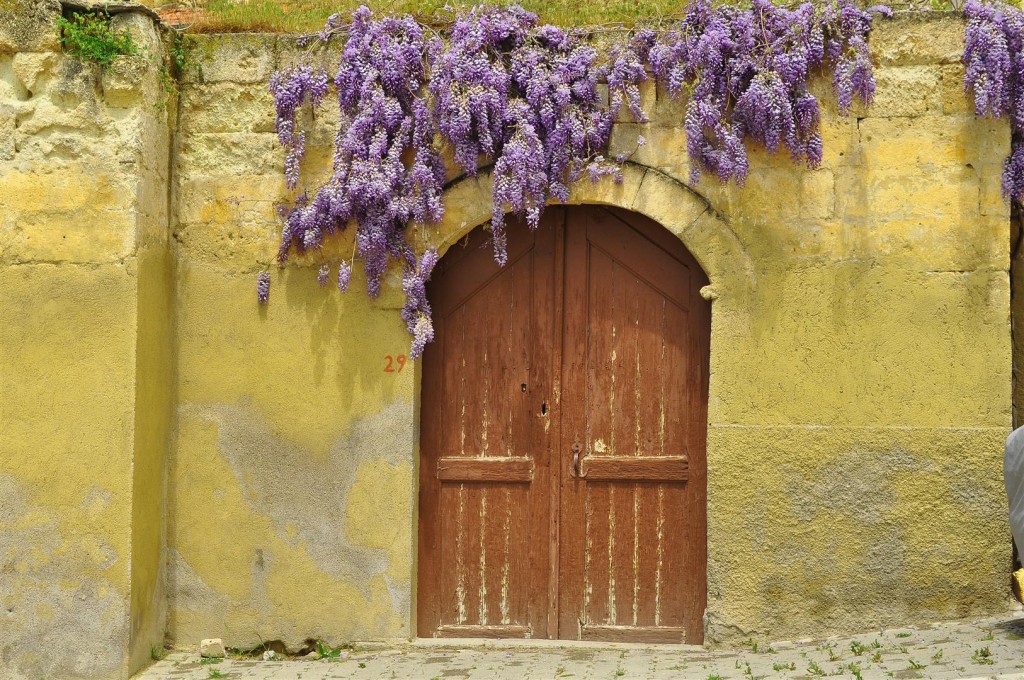 I notice the ceanothus   in vivid blue bloom just now and I am sure the garden centres are selling out to the impulse buyers …. ceanothus also known as American lavender , certainly looks terrific in bloom but it is a short lived plant and fussy about where you plant it and I would only plant the small low growing variety called repens as the tall shrub / small tree variety of ceanothus does not come through a hard winter  and even if it does it can rot at the base over a few years and suddenly snap off as mine did this year ….. mind you it is a difficult plant to walk away from at the moment in the garden centre as your brain develops the usual short memory trick and the eternal optimism of the gardener kicks in ! 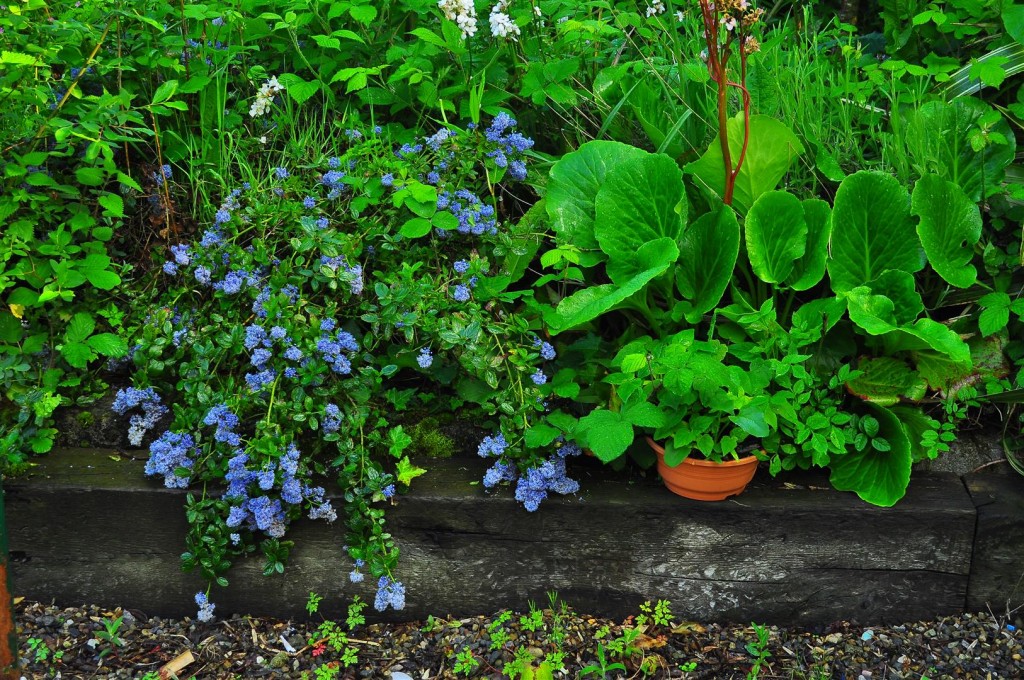 Did I mention hostas ? Well sorry but here I have to brag a little as this is HOSTA month in the garden and this year my big leaved sieboldiana hostas are just magnificent ……. finally after a few years in the ground these guys are really paying their way and I attach a few photos of what are my personal number one plants in the garden  .

As I have pointed out many times I tend to only grow the big grey / green leaved sieboldiana type as these give the most dramatic effect and of these I grow Elegans , Francis Williams and Empress Wu …. Elegans and Francis Williams are really the same hosta except that Francis Williams has a slight variegation … Empress Wu is a relatively new hosta and is said to be the largest leaf variety in captivity , this is only my second year growing it as previously it was hard to source and so far I am happy with it but I find it’s colour, a kind of pale green leaf is not as nice as Elegans and I feel the colour may get a washed out look in mid summer so my personal jury is still out on Empress Wu  …… it’s leaf is certainly big  but as the actress said  ….  size doesen’t matter … however for me Elegans after a few years growth is the best hosta of it’s type and definitely has the Wow factor !

I also grow a smaller green leaf variety called Halcyon which is compact but puts up a lot of leaves after a few years planted and the effect is lovely but you need to group at least three of Hosta Halcyon together about a half metre apart or it looks lost or plant it on its own in a pot in shade . 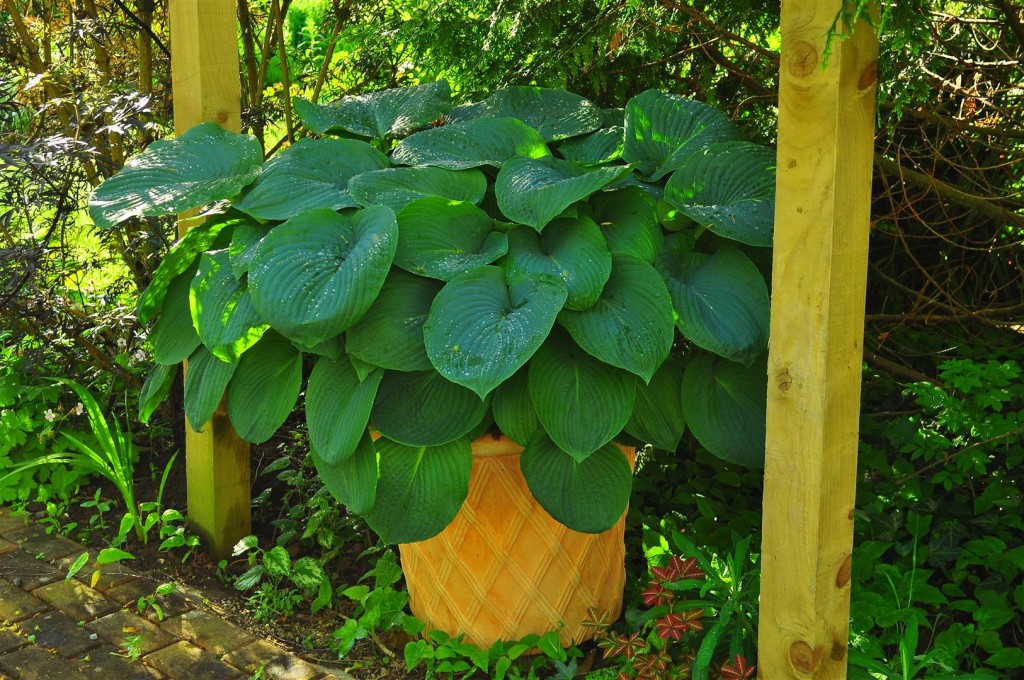 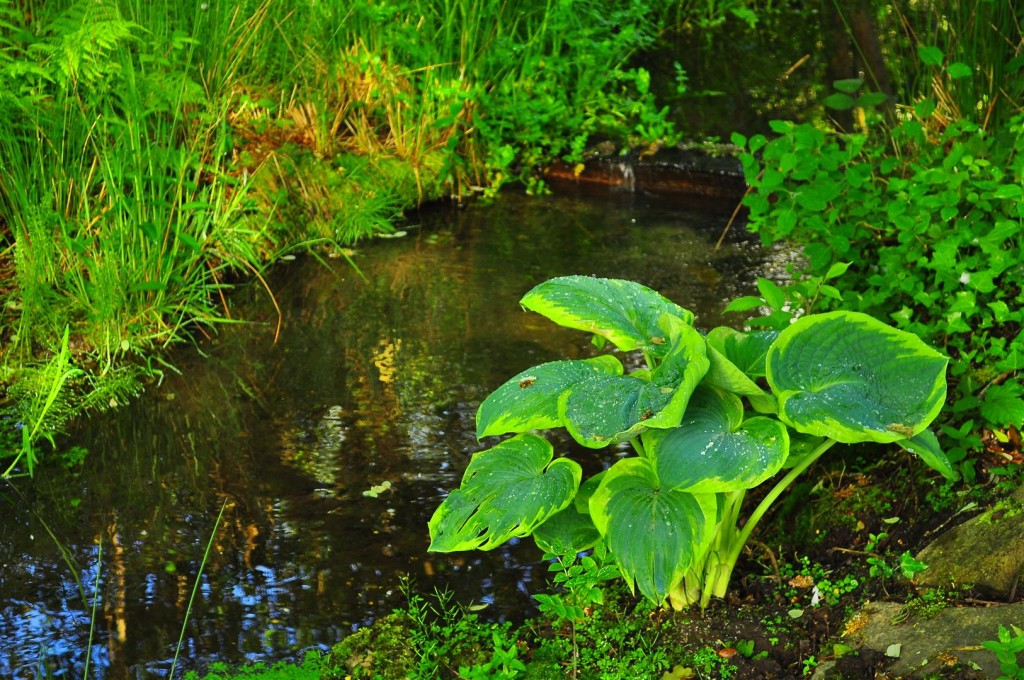 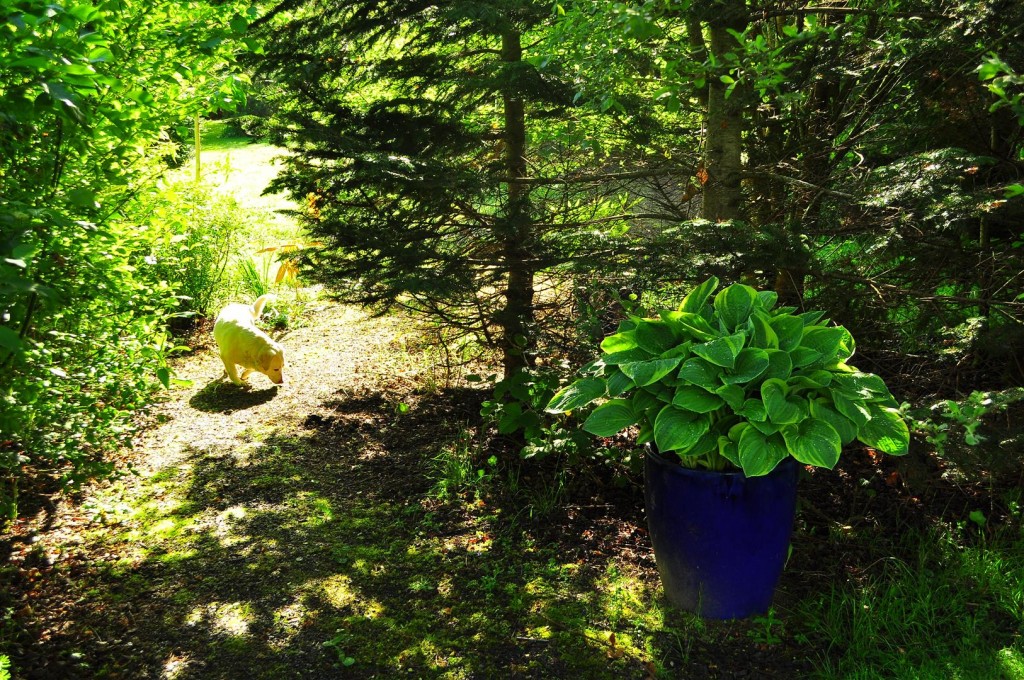 Hosta Aureomarginata with Toby May 22nd 2014 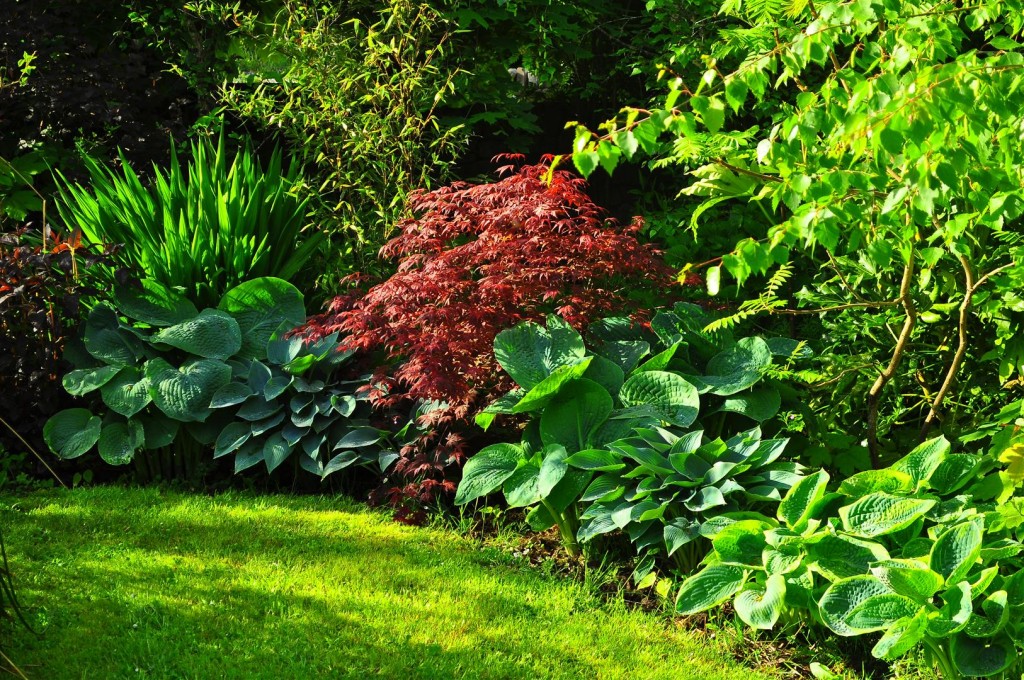 All my favourite hostas together ….. Francis Williams, Elegans, Halcyon May 22nd 2014

Perhaps I was a bit nasty to Empress Wu in that last paragraph ….. that sounds a bit Flash Gordon like but here is my Empress Wu in it’s second year so you can make your own mind up ! 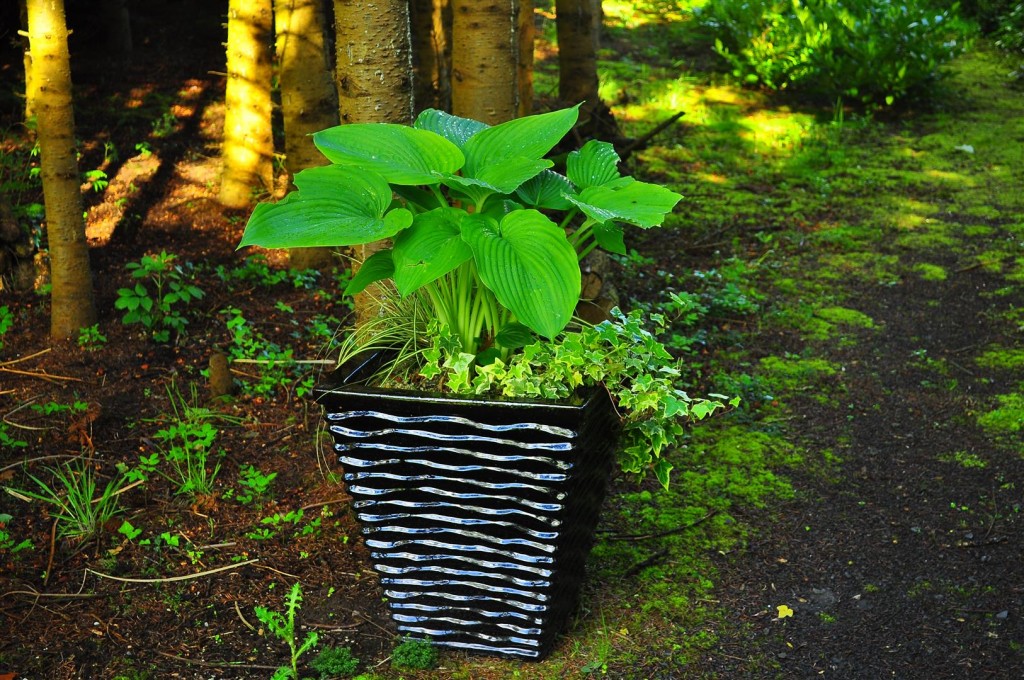 The secret of success with hostas ? Always grow in shade never in direct sunlight as strong sun scorches the leaves and give  lots of water in dry periods . Christopher Llyod , the great English gardener,  loved hostas and in his classic  book  ” the Well Tempered Garden ” said that he fed his hostas with barrow loads of pig manure and that they positively wallowed in it !

I grow a lot of hostas in large  pots and OK it is a bit of a luxury to devote a pot for an entire year to a plant which will leave no trace for five months of the year but in my view it is worth it for the dramatic effect these magnificent foliage plants display for the summer and autumn . Some of the pots are in deep shade and I use primary colours , red , blue , black etc. for these locations and as these are in the lower gardens I rarely if ever water them and leave them to nature and year after year they give of their best without complaint  . The pots of hostas near the house I treat well with almost daily watering and feed regularly with tomato fertiliser , these are my Wow factor Big Boys !! 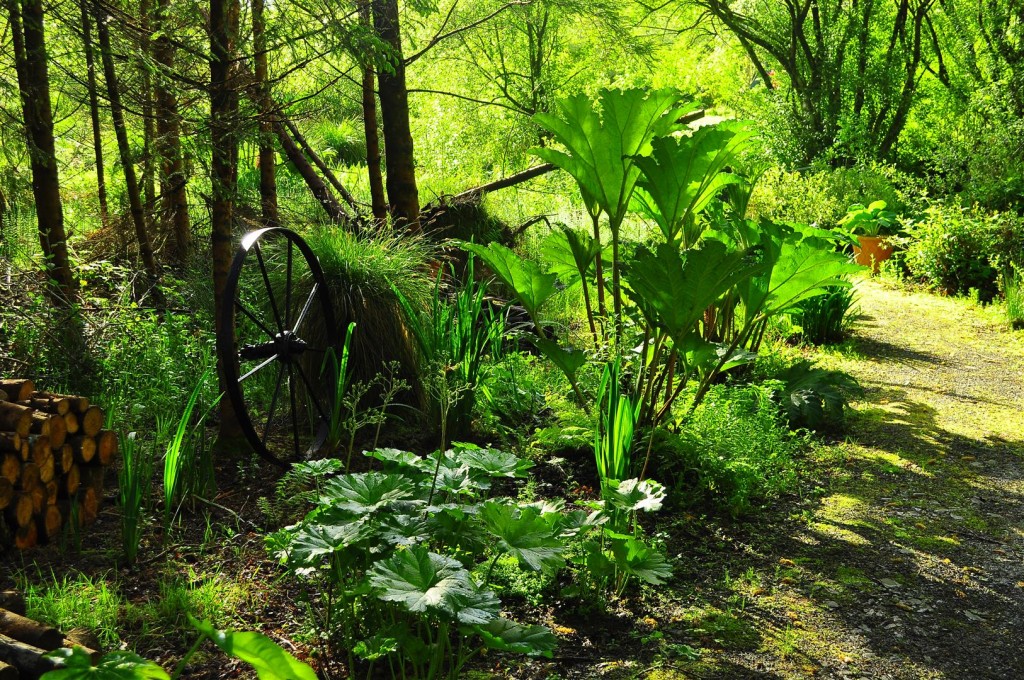 Everywhere you look just now in the garden there are plants either at their best or about to come into their prime and late May is a magical time in the garden as everything is lush , the roses are out and in my own case the perfume from the banks of wild rosa rugosa is everywhere …. don’t be bothered with all those normal roses which are fussy , full of black spot and green fly and which require careful pruning while rosa rugosa is hardy , disease resistant , has luscious olive green leaves , lovely scented flowers which follow you as you walk past and at the end of the year you can take a chain saw and level it to the ground and it will be all the better for it next year … what’s not to like ? 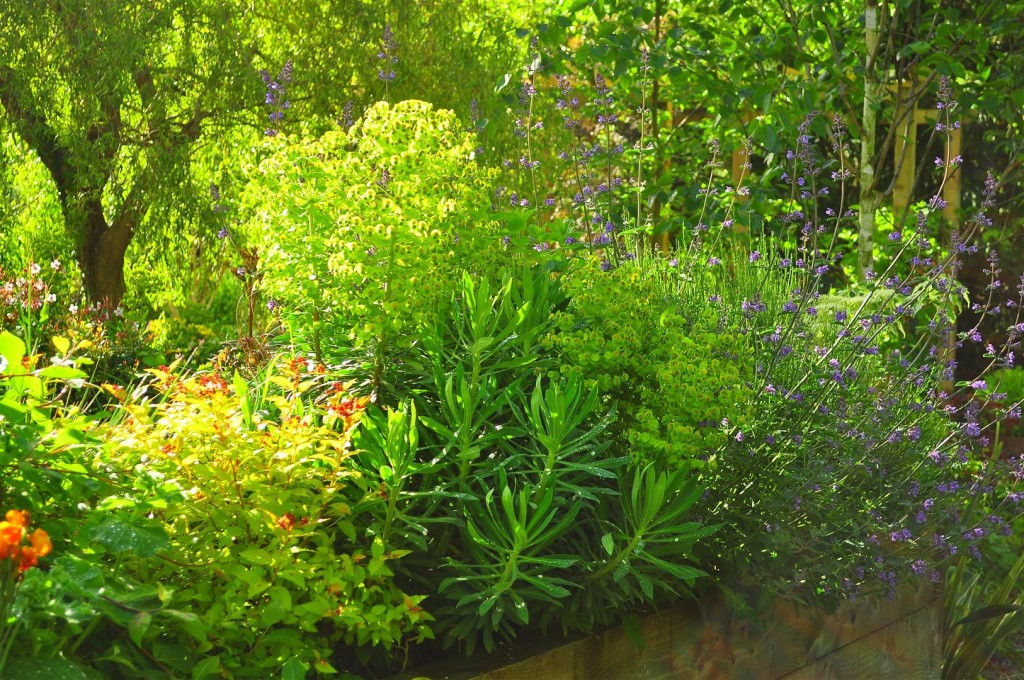 The raised bed with Euphorbia and Nepeta May 22nd 2014

Nepeta also known as cat mint is a fabulous plant as supposedly cats like to roll around in it although my cats never seem to do it ( too posh to roll ?!) , a perrenial , which delivers every year with no fuss , no special requirements apart from an annual hair cut to the ground in November to tidy it up , terrific blue flowers …. I grow the variety Six Hills …..  and when not in flower it grows into a nice compact mound of lime green leaves ….. last year I saw an imaginative planting of a large basin with only nepeta plants …. about six plants were used and  the display when in bloom was incredible .

Talking about lushness in garden plants right now at the end of May , nowhere are they more lush than in the garden centres with seemingly every plant in full bloom ….. remember that all these flowers will have been brought on under glass and carefully brought to this point of lushness to appeal to the impulse buyer ( which if we are honest we  can all be when it comes to plants ) so when you plant out expect the plant to get a bit of a shudder and not grow on at the same pace . When buying plants in flower you really are buying for next year unless in the case of hydrangeas where in my experience the effort required from the plant to produce flowers under glass results in little if any flowers the following year and I find hydrangeas need two years to recover after you buy  .

Certainly in the case of new hostas the plants will take a hit when planted out the first year  but they will be fine next year ……. It helps to be an optimist when it comes to gardening !! 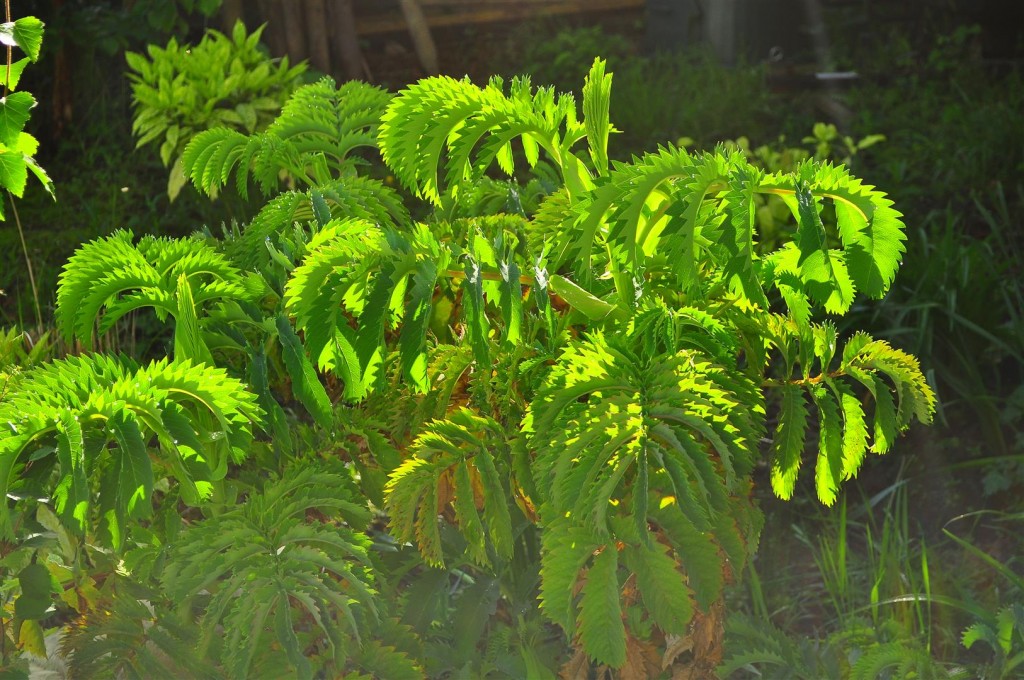