My Gardening Week July 30th 2018 … the Kalahari Desert has moved to Ireland !

I don’t know which is worse for the garden , Hurricane Ophelia last October that blew away trees , the Beast from the East that dropped a ton of snow in two days in February or the recent Kalahari style June and July drought  where trees and shrubs are wilting away under the effects of seven weeks on temperatures in excess of 30 deg and no rain . This heat will kill a lot of plants in Irish and UK gardens and even when the rain returns gardens will not recover and August to November will be disastrous for anyone with an open garden as trees and shrubs will shed their leaves prematurely to protect themselves .

A hose pipe water ban came into effect country wide for the month of July and as Ireland has no charge for water it means that those of us with gardens to water cannot do so at our own expense , a consequence of the loonie left anti water charge brigade last year led by middle class politicians in Dublin who refused to pay 100 euros a year and now we have to find 8 billion euros to patch up and repair our antequated water system instead of properly funding the necessary upkeep of our national water agency with an annual contribution from each household like in all other EU countries.

A rare event , Ireland from space completely without clouds ! 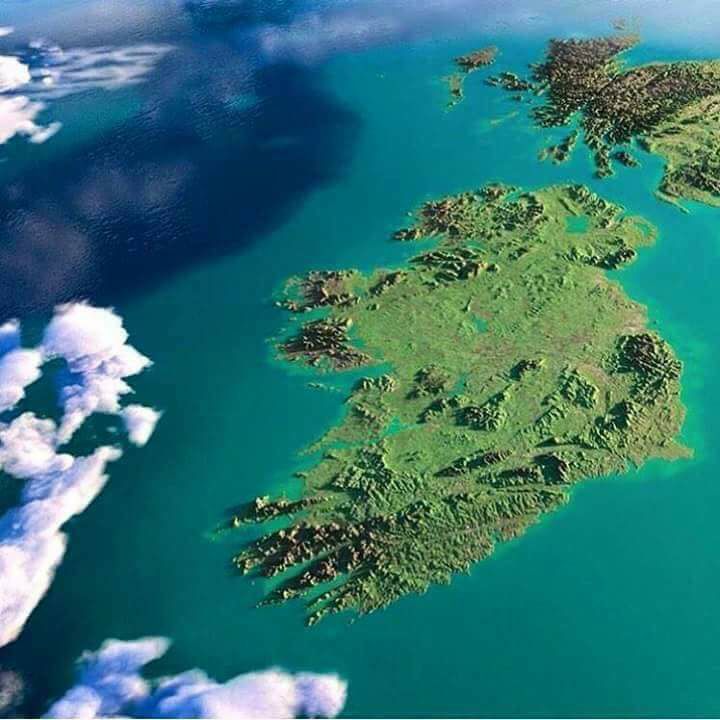 I feel very strongly that gardeners should be allowed a dispensation to water their gardens at such times of drought as they have invested a lot of time and expense over the years and now to lose precious trees and shrubs because of lack of watering is devastating . We are lucky here in this garden as the ground especially in the lower areas is wet and water retentive while also we have our own well and I have concentrated on fire brigade action all over the garden where I see signs of plants in trouble even though it means wheel barrowing water throughout the acres , plants in pots are most at risk in high temperatures however I see that if a pot is in shade for part of the day this helps enormously to keep the plants alive as in our lower garden there is no handy water supply apart from the ponds and yet those pots have come through so we have as gardeners learned lessons from this once in forty years drought .

The last time we had such a hot summer in Ireland my daughter, Claire , was a pin up girl for a Lads Magazine in 1978 … OK she was 13 months old at the time and the magazine was the Irish language newspaper Gael Og !! 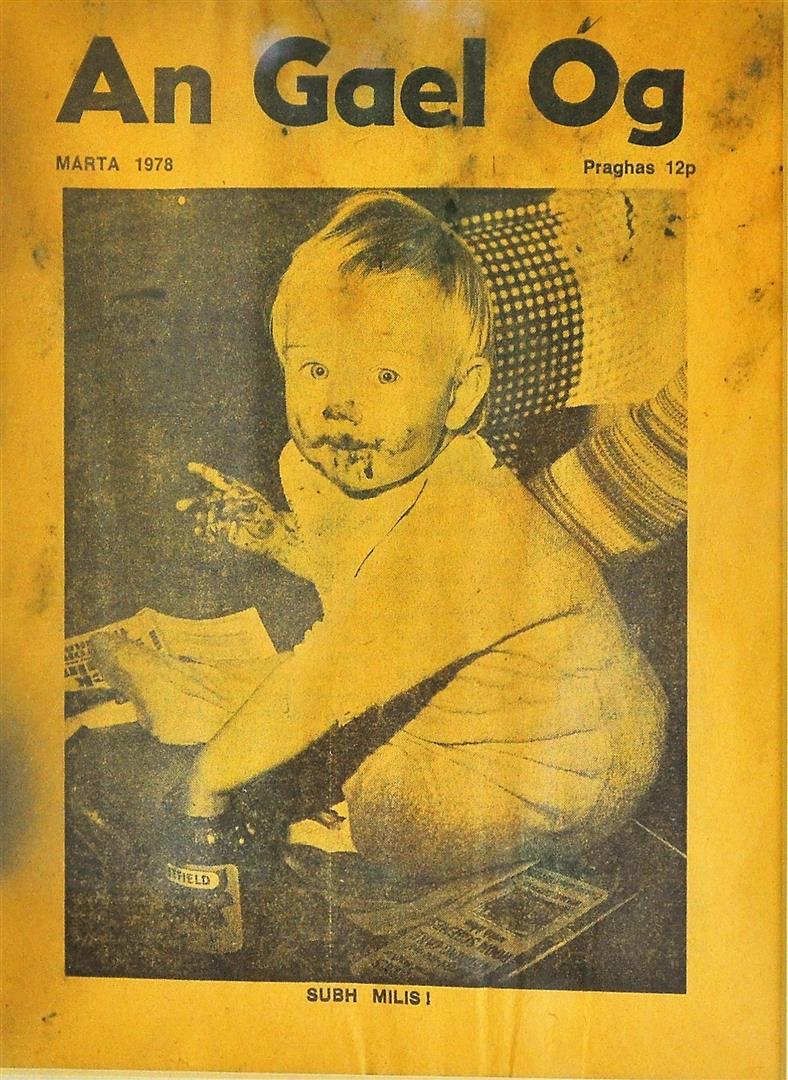 Very topically a new book has just been published by Peter Wohlleben , called “ The Hidden life of Tres what they feel ” and his thesis is that trees communicate with each other and have a collective intelligence similar to insect colonies . Scientists show that trees communicate through a fungal network called mycorrhizal and Wohlleben’s book brings the latest scientific information to the general public . He has devoted his life to the study of trees and manages a forest reserve in his native Germany where through  practical experience his theory is that trees share nutrients and water and send distress signals to each other about drought and disease , insect and animal attacks and that other trees react and alter their behaviour when they receive these messages , he even goes so far as to say that older trees or matriarchs as he calls them look after the younger trees .  Naturally the scientific world is suspicious of any touchy feely type talk about trees having feelings like humans and will only accept that trees feel distress in times of danger as in fires , drought or animal attack but do not “ talk ” to each other … so perhaps hold off on giving your trees a hug just yet !!

But I have enjoyed the balmy weather the drought brought especially how you could sit out late at night in over 20 deg of heat , this was the time of day I enjoyed best and the photos below illustrate how the garden looked on late evenings in July . 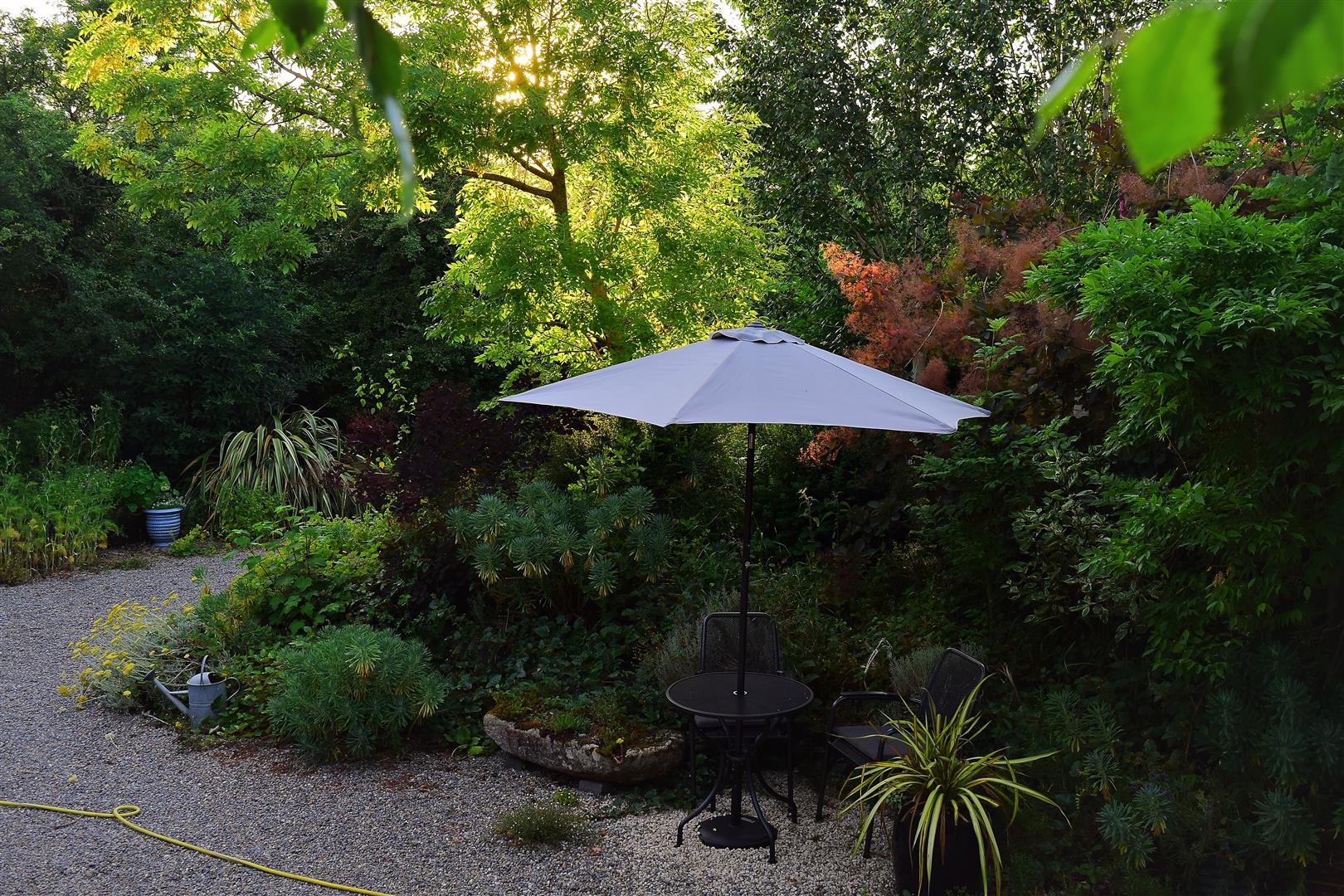 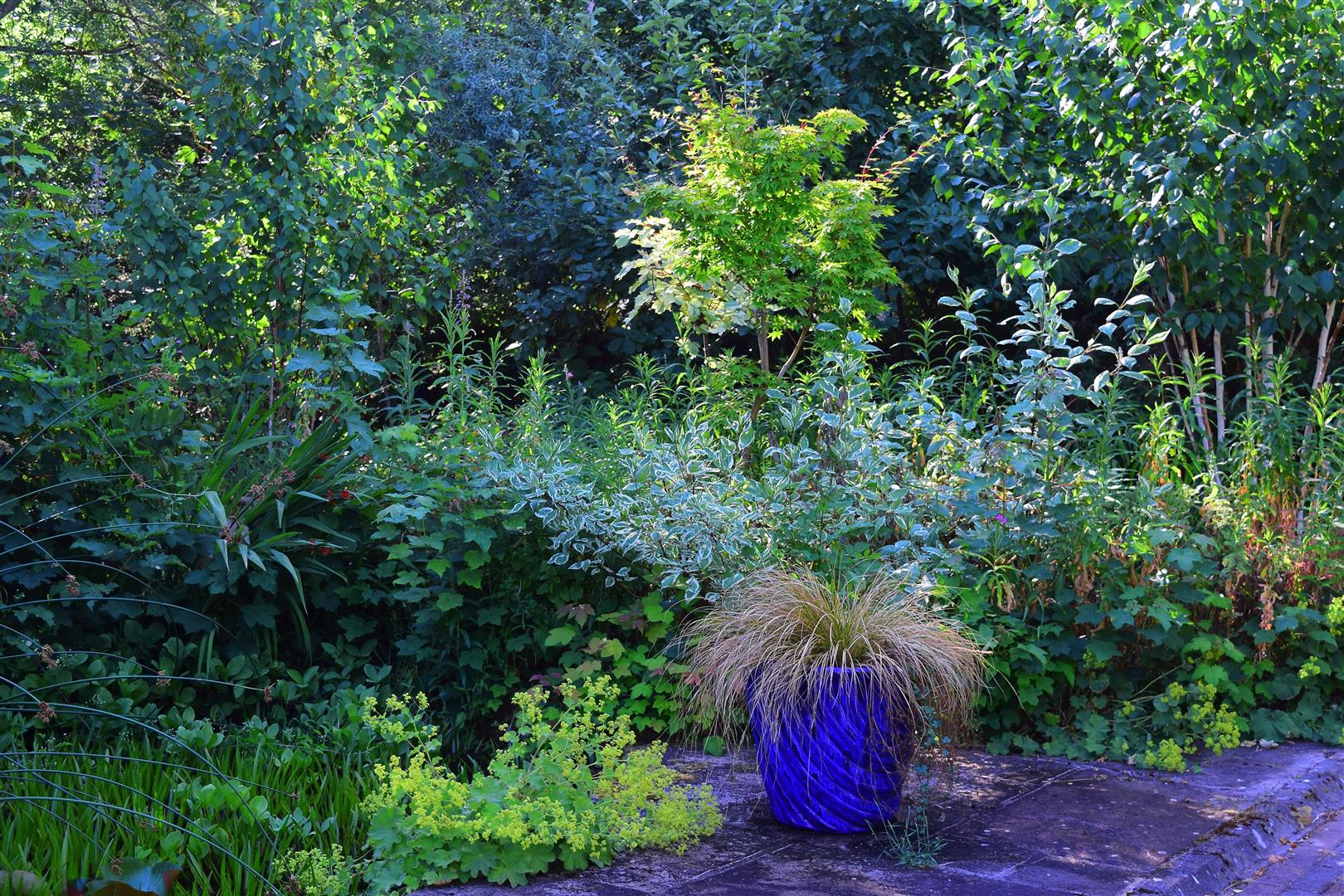 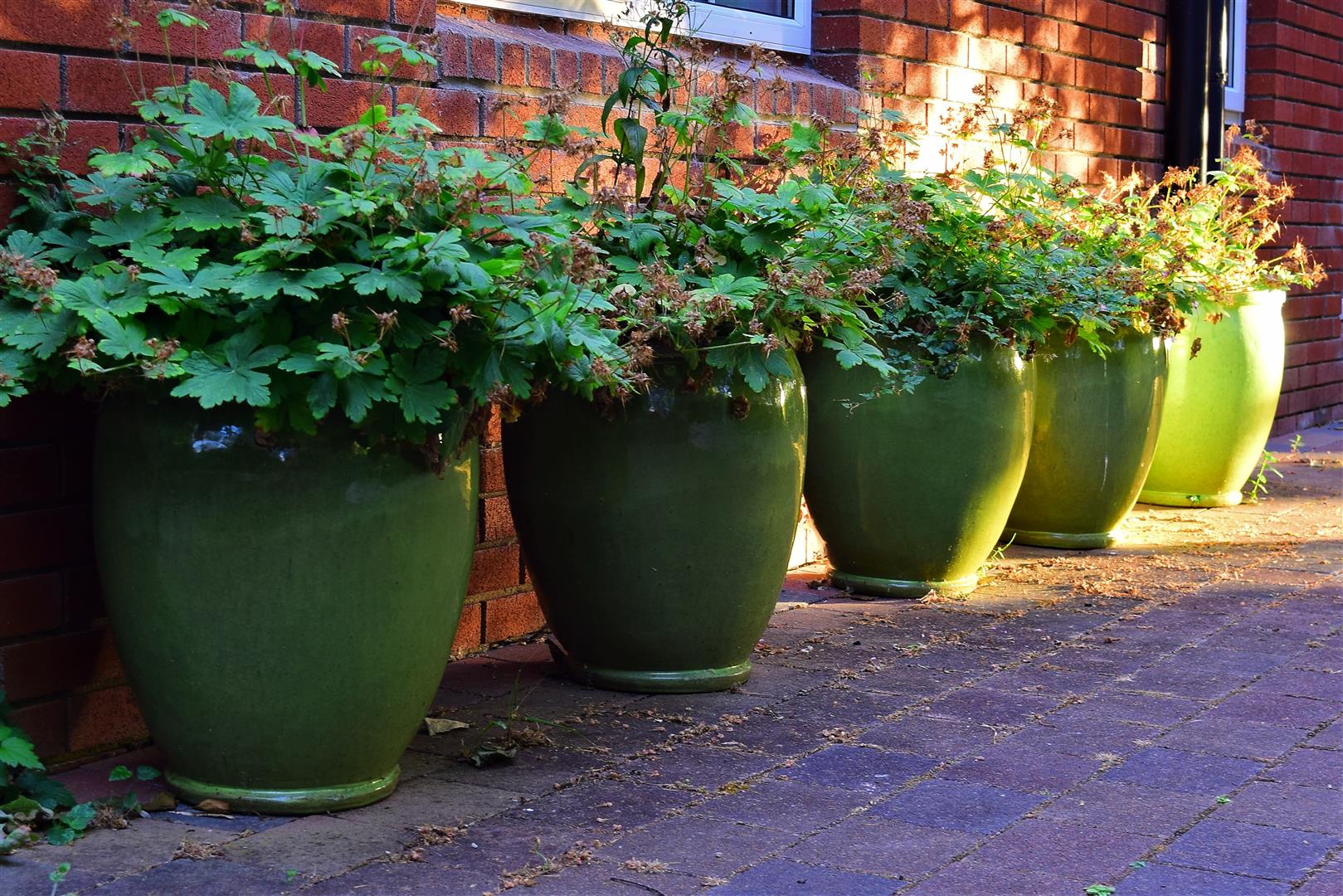 A small group from the Irish Garden Plant Society , an all Ireland organisation , visited in late July to view the garden in advance of  a larger group visit next year and a provisional date for May 2019 has been agreed . Always interesting to have your garden vetted by such a prestigious body of gardening experts and it was a pleasure to show Margaret , Janet , Martin and Ted around . 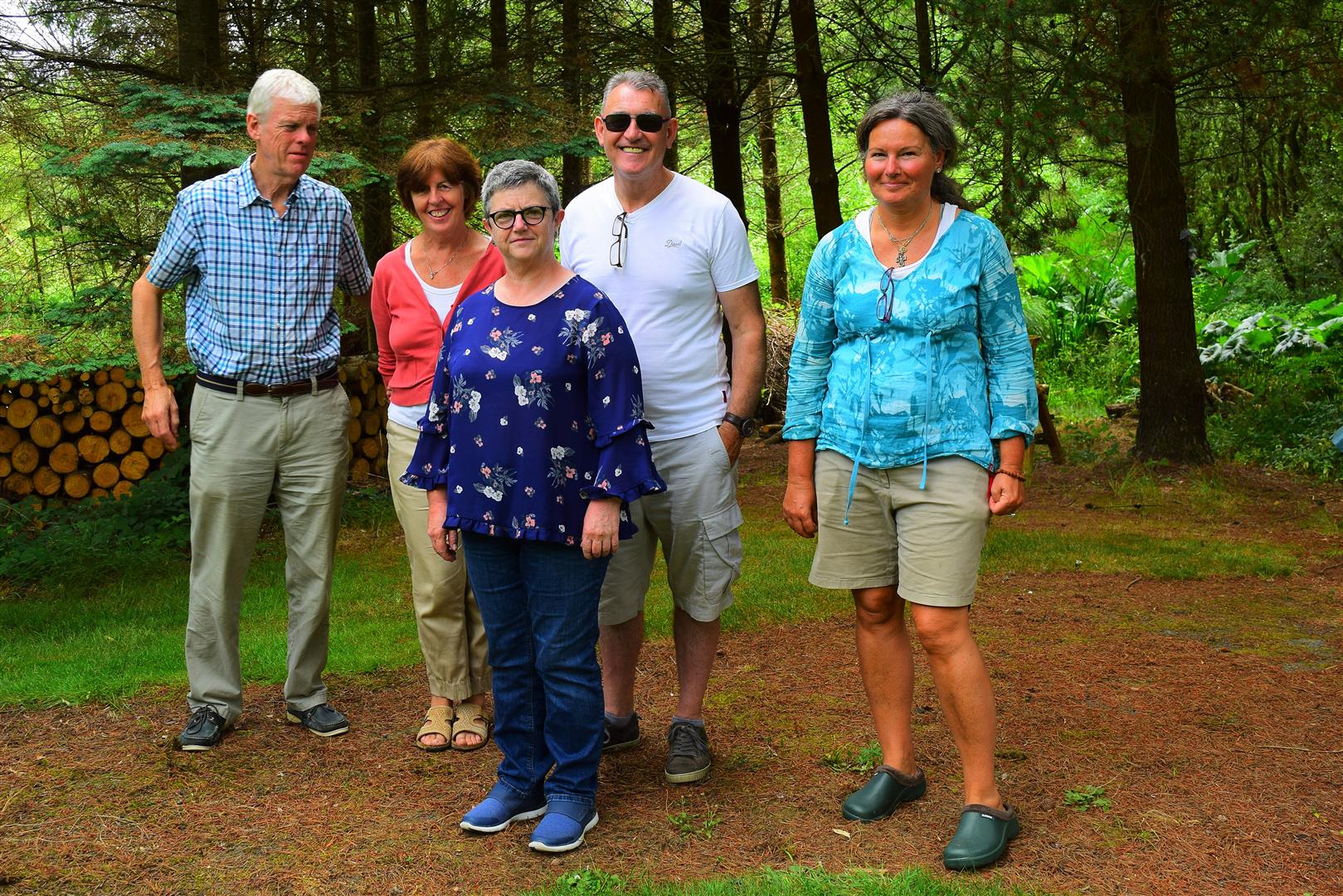 We enjoyed a great day with the Kilkenny Horticultural Society when they visited the garden in July  , a lively group of committed gardeners who shot a million questions at us ! 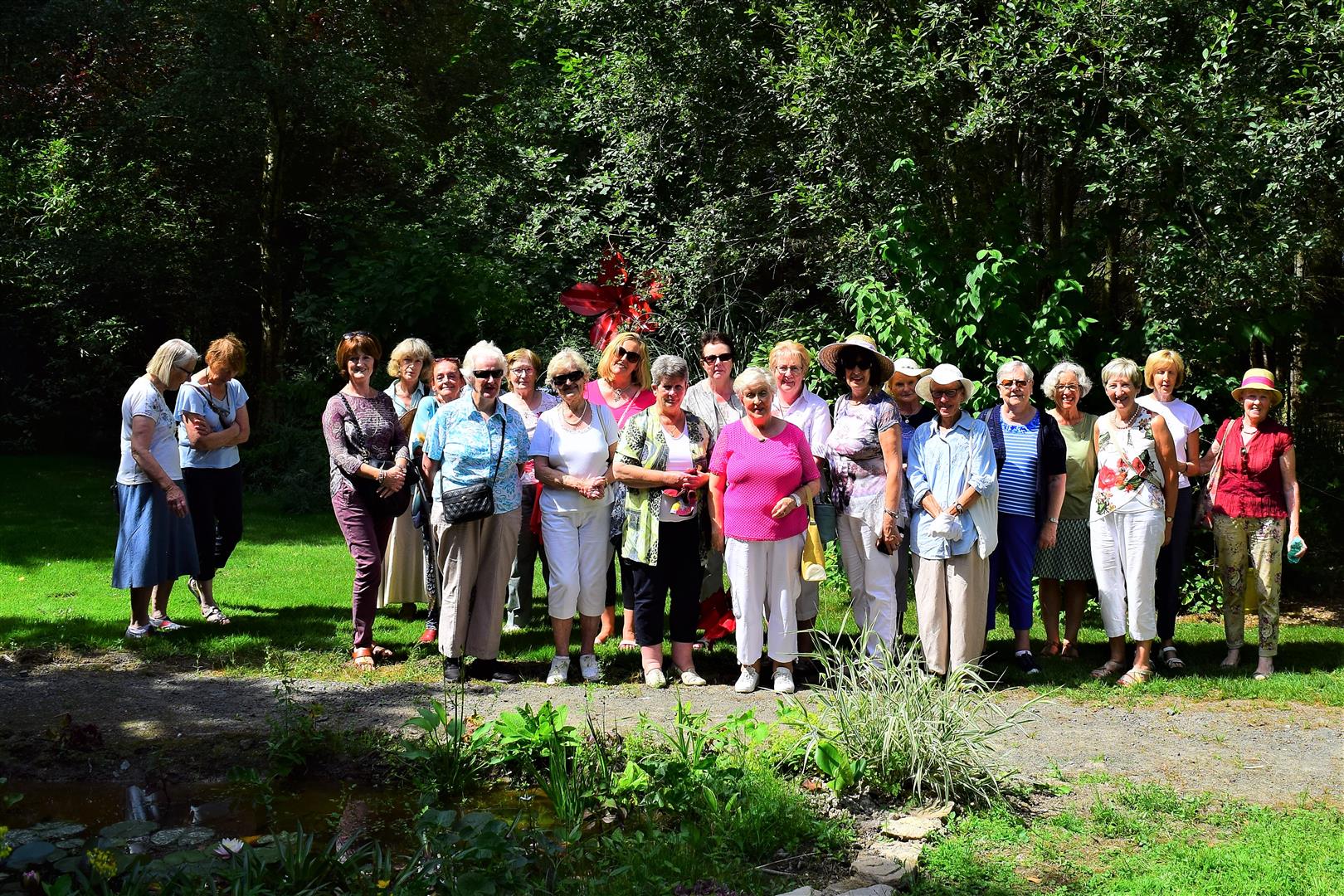 Joe Buckley , who writes thrillers under the pseudonym J.L. Kramer and whose last book is When Duty Calls , stayed with us for a few days in July . Joe a veteran of South East Asia with the EU Commission is publishing his new book next year , Origins , the first volume of a planned trilogy which we hope to launch here in Clonmel at next years garden Open Day , Joe and I soldiered together in Rosslare Customs & Excise many moons ago in the mid 1970’s . 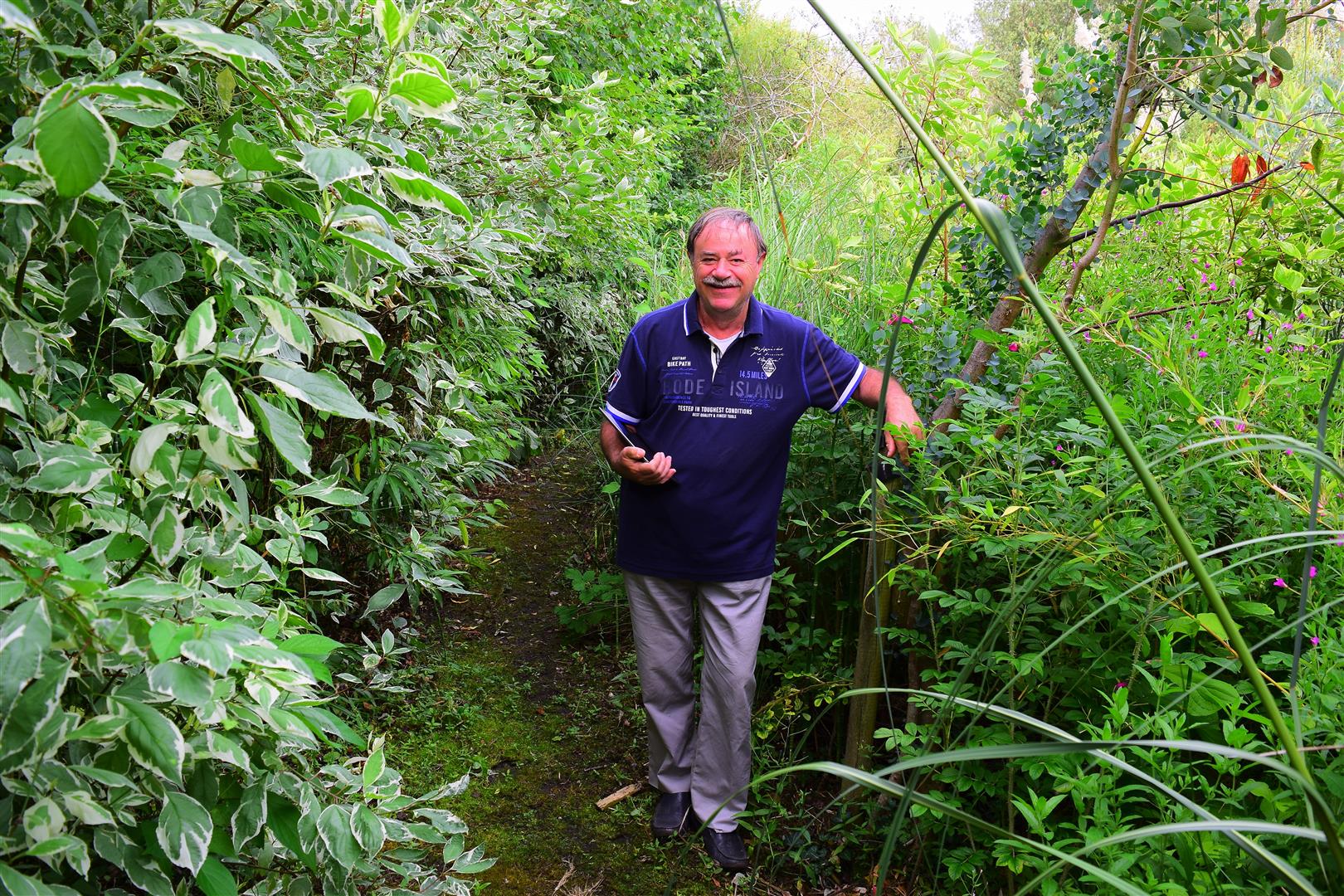 The Sunday Times writer , Martin Hemming , a political affairs commentator , took up gardening a year ago after reading Alan Titchmarsh’s book How to be a Gardener , and in his weekly column last week summed up what gardening can entail  “ gardening can be rewarding but it’s a war zone in a war that can never be won and that takes up a shedload of one’s time and energy which was not the impression that Titchmarsh gave me. There’s always another slug lurking, another weird white residue that you’re really not quite sure what it is… and now there’s a heat wave  ”  !!!

Years ago when I was a child growing up in Barron Park a big adventure for our gang of 10 year olds was an all day trek across town to what was called the Wilderness,  an overgrown area of trees and brambles through which the Frenchman’s stream ran and where we would catch “pinkeens” in jam jar bottles tied with string which we would then yank up when some tiny fish swam in  … two points here , yes it was back in the `1950’s and secondly what were our mothers doing allowing us to be away all day , wouldn’t couldn’t happen today !! Anyway the point of this annual excursion was to collect bull rushes that grew wild along the Frenchman’s stream which we brought home in bundles to dip in petrol and light outside our “ wigwam ” when we turned into Sioux Indians and miniature Crazy Horses and Sitting Bulls . The Wilderness and Frenchman’s stream are long gone ,covered over in housing estates but the memory of the fun we had with those bull rushes made me transplant a few bull rushes into our stream … a bad move as they multiply like mad through our water and every year I now have to wade in and dig them out all the while being bitten alive by crowds of horse flies and this week was that time of year ! 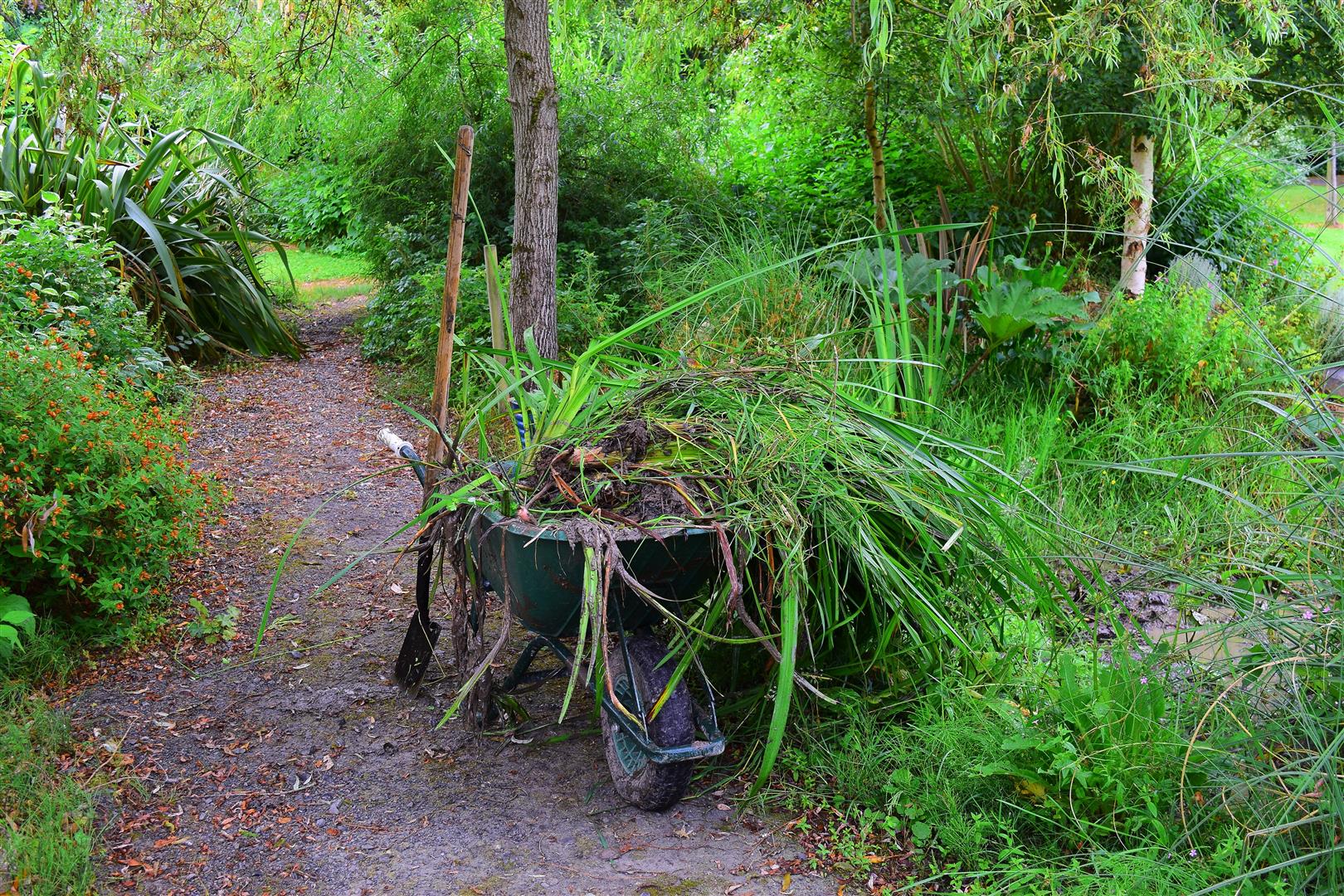 I have been asked these past few weeks what do I consider the worst of the three natural weather phenomena that have occurred in the garden over the past eight months … well the hurricane , our first ever in Ireland , was certainly frightening to live through not knowing just how bad it was going to get while the snow was really a two day thing but personally I found the drought with no rain for over fifty days the most stressful as every day you were watching the plants suffer and die slowly before your eyes so of the three the drought was the worst and yes I know in a few weeks time when normal weather is resumed we gardeners will all be moaning the lack of some sun but still I for one will always be glad to have our normal reliably damp summer weather back again !

I have a thing about growing roses as in the past I got fed up coping with black spot and white fly which disfigure and blight what is a lovely shrub and as for the need to daily dead head the flowers , well don’t get me started on that subject with the result that I haven’t bothered with roses for over thirty years … but there is one rose I make an exception for and that is the semi wild Rugosa rose which we have lots of here . Rugosa has a beautiful leaf , crispy and fresh green , doesen’t get black spot or white fly ,comes in two types of flower , pink and white and each has a beautiful smell , generally flowers once in the summer and doesen’t repeat but the leaf and structure is lovely and I wouldn’t be without the Rugosa   rose . 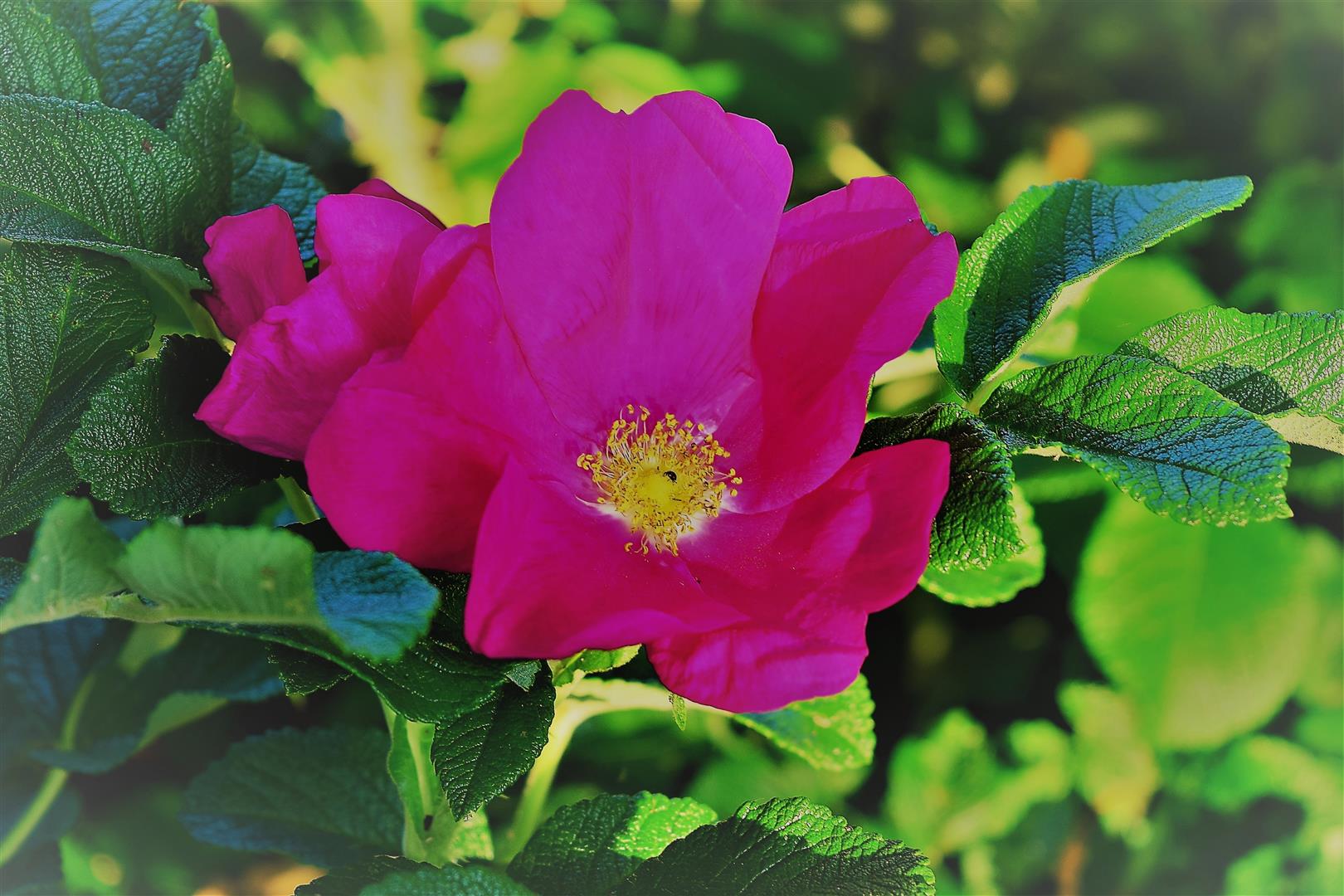 And finally but not least the Open Garden Day for the Clonmel Lyons Club will be held on Sunday August 12th with all the proceeds going to two local charities . Hopefully the weather will be there for what is always a great day and where we get the chance to display the garden for such worthy causes … hope to see you there ! 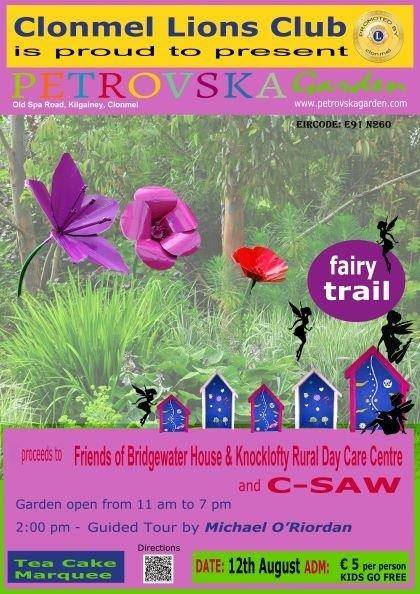