The Garden Open day for the Lion’s Club kept up the tradition of the rain staying away and a great turn out of support for two very deserving local charities with over 180 people paying in on August 12th and raising over a thousand euros . As always a nice blend of visitors who asked interesting questions about the garden , kept us on our toes all day  , many who contributed names to plants and weeds which I could not identify  , mayhem at times with children and dogs running wild but always well behaved ! Again as always the Clonmel Lion’s Club led on the day by Michael , Pascal , Rikki and Conrad did a great job of organising road signs , erecting tents , manning the gate , arranging teas and coffees and gorgeous cakes which allowed Snezana and I to concentrate on making everyone feel welcome to the garden .

The week in the run up to the annual Charity Open Day is always hectic as we try to get the garden looking it’s best on the day and there is a lot of pressure , self inflicted really as I don’t think visitors are overly worried if the lawns are cut and edged but there are other concerns such as making sure that all brambles and overhanging trees and shrubs are cut back so that nobody gets a nick or walks  into a branch , we also check the wooden walkways to make sure there are no loose boards … afterwards we walk around to check there are no bodies in the swamp … only kidding on that one !

As always the next few days in the garden is spent recovering our voices and legs and again as usual not as much as a sweet paper left behind by almost 200 people walking through over the eight hours we were open . 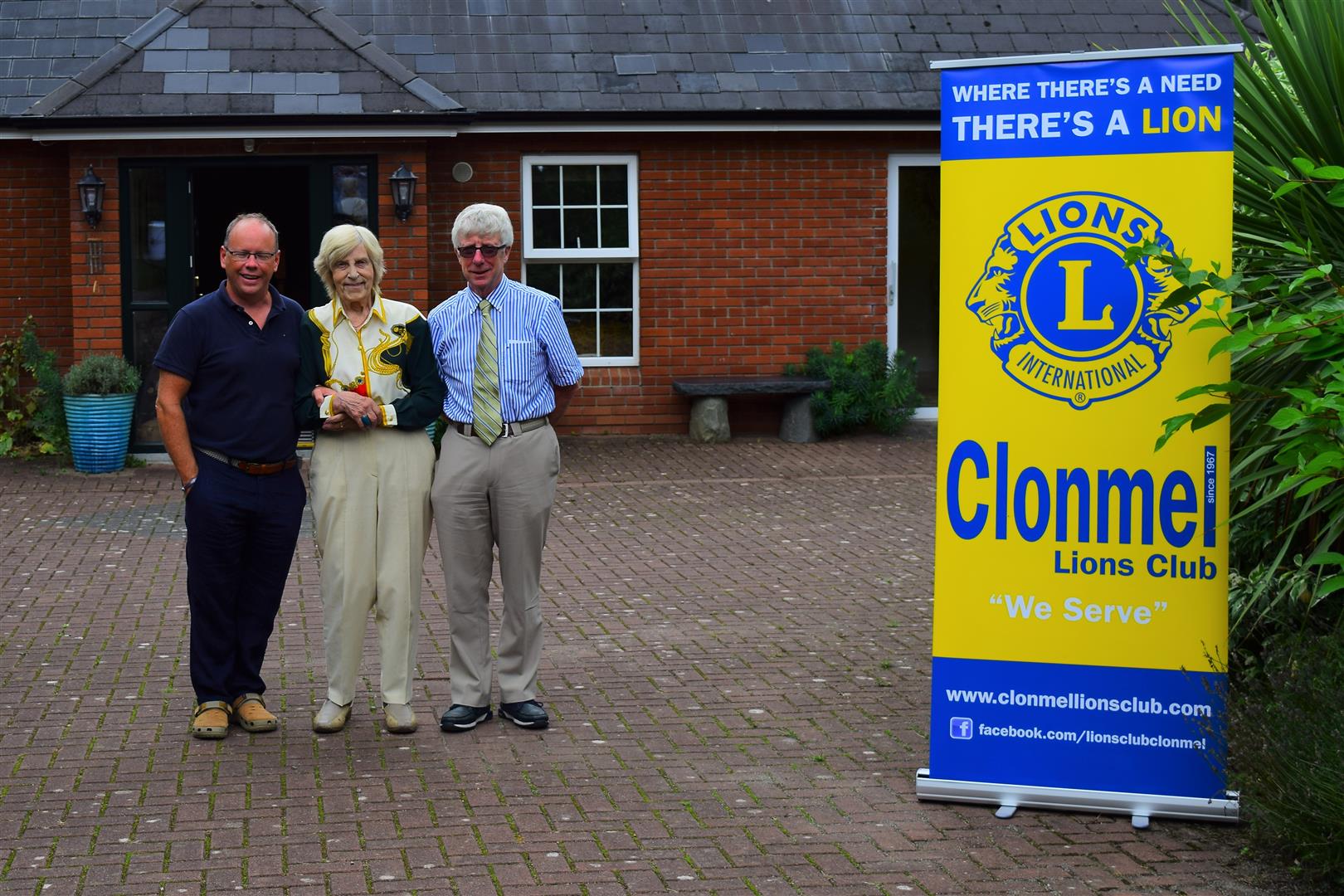 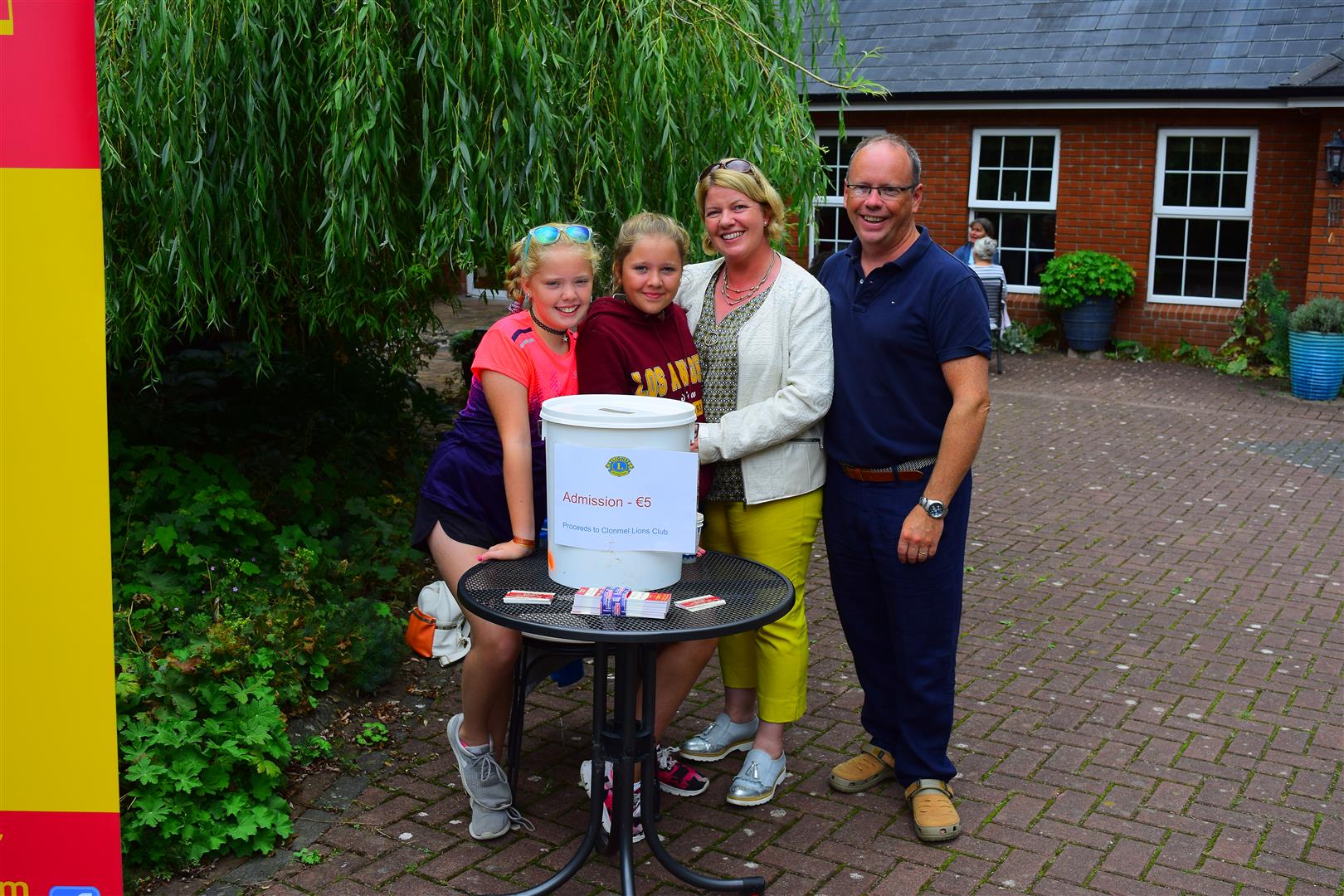 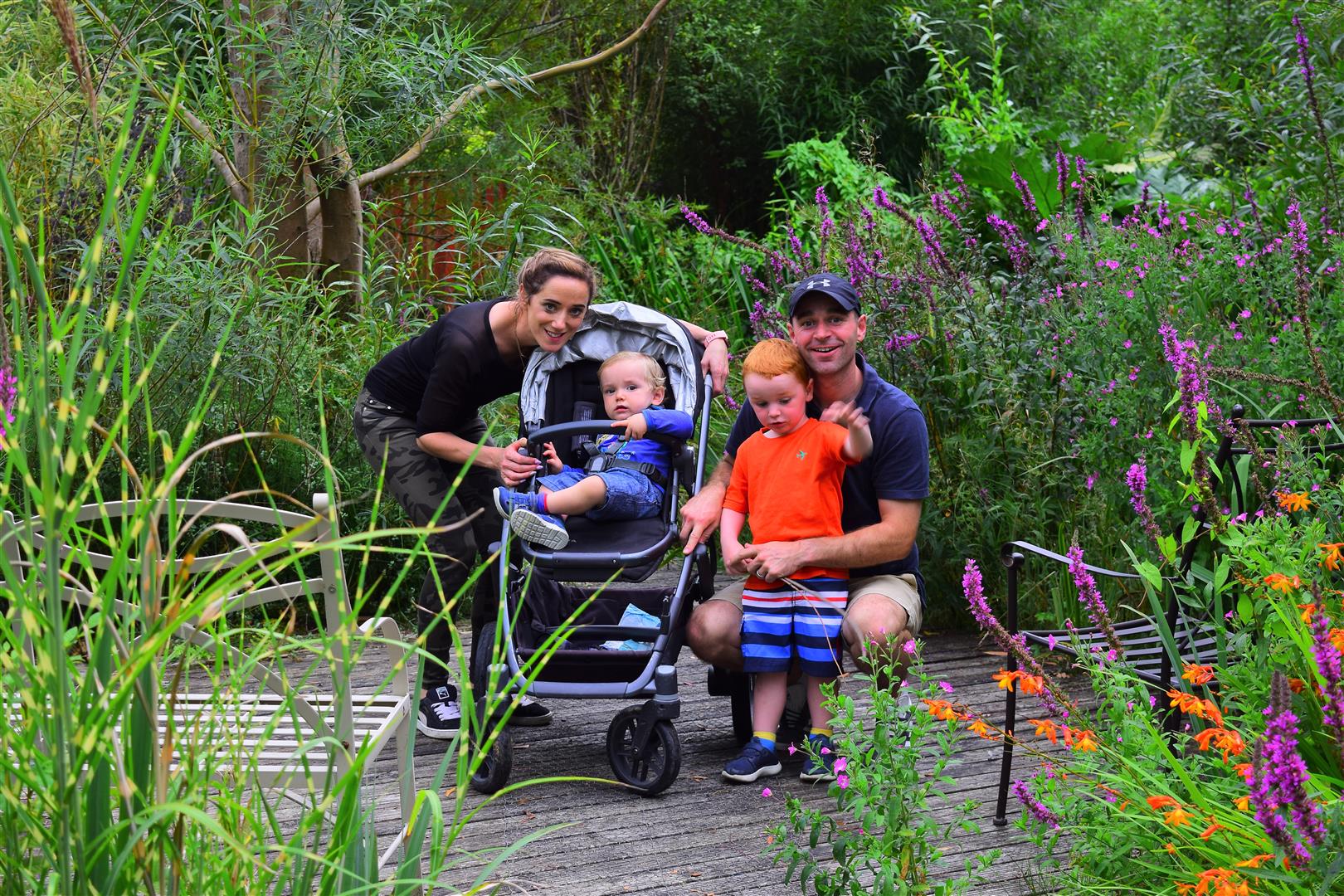 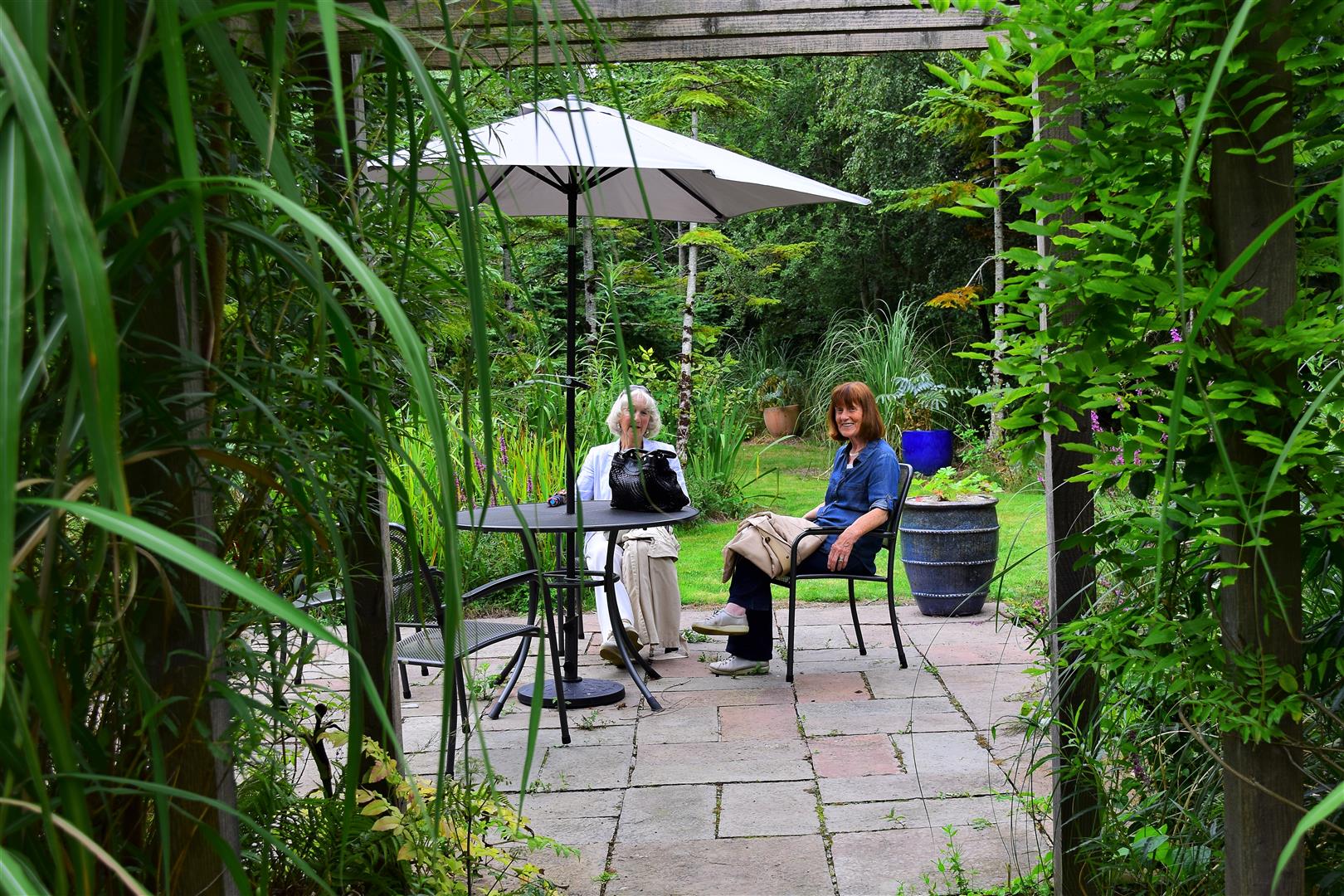 The black stemmed , blue lace cap hydrangea in the lower field attracted a lot of comments as did the tall panniculata variety limelight in the secret garden , both of which look their best in August . I do not have great success generally with hydrangea but these two specimens come back every year and flower spectacularly with almost no attention  from me apart from cutting off the dead flower heads  in April unless they have fallen off during the winter on their own accord . Hydrangeas can be fussy about soil and light as they need water but not wet conditions and seem to do better in part shade but mine fend for themselves generally in woodland conditions but I do mulch them with grass clippings in spring . 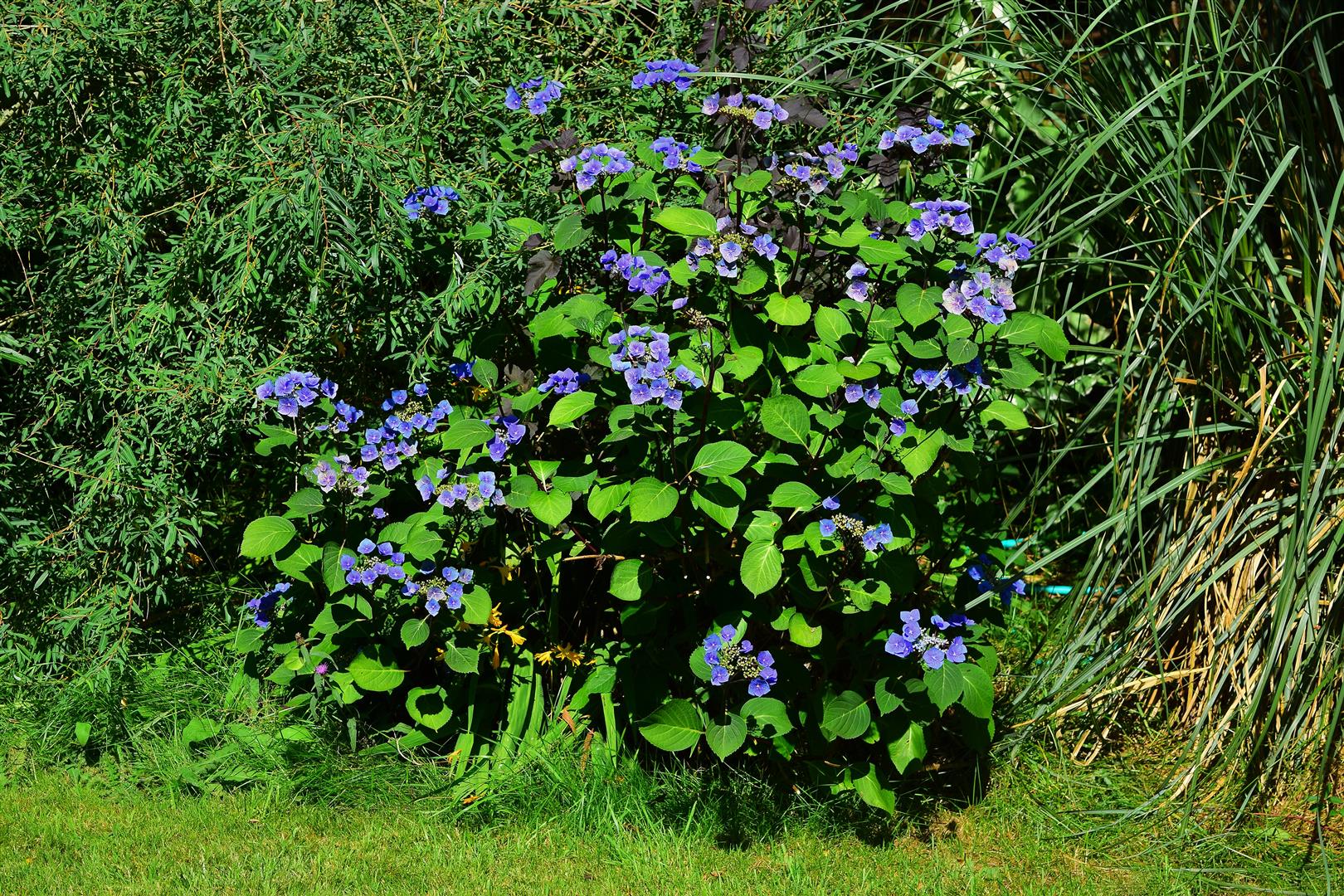 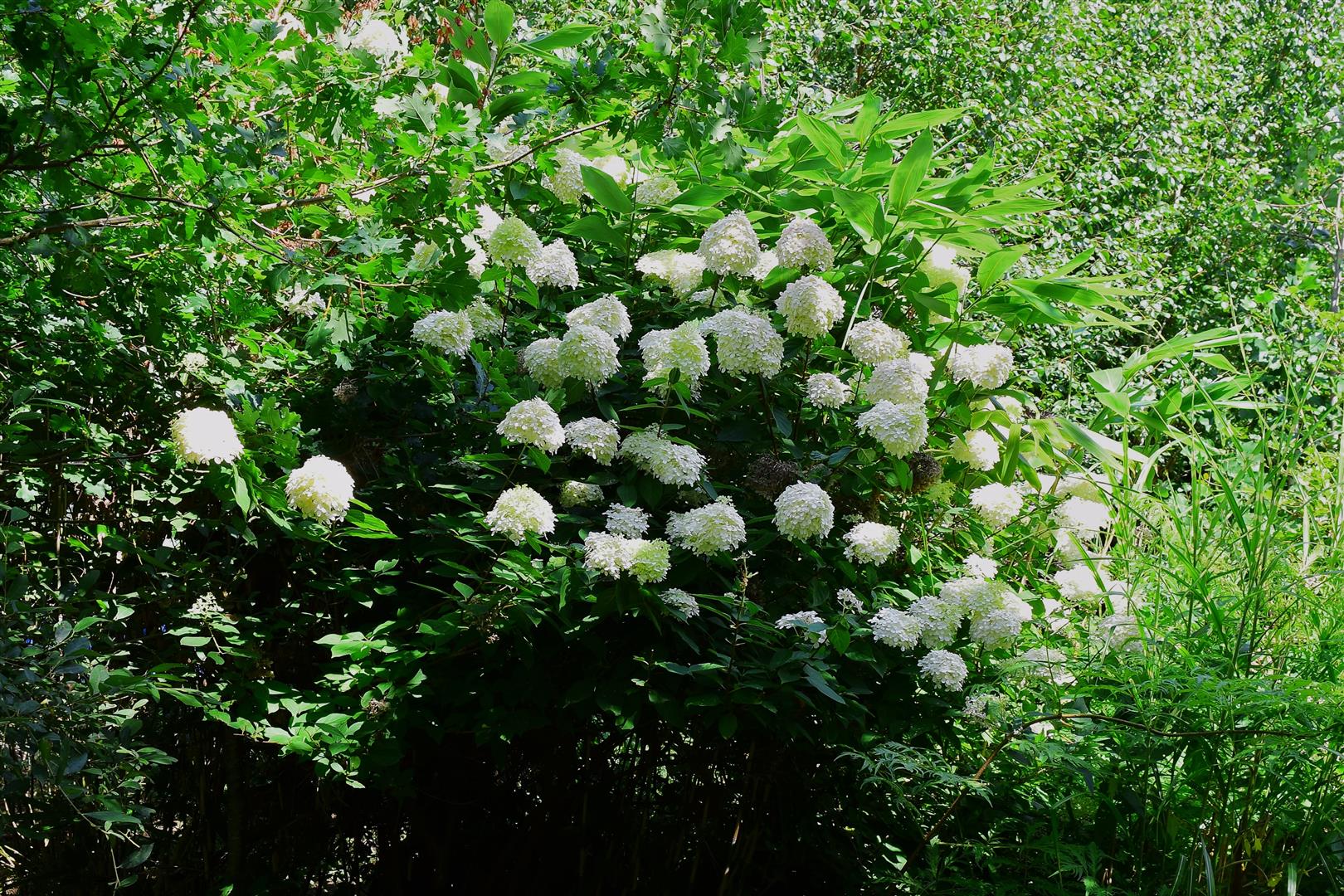 Those gardeners who grow a lot of hydrangeas are obsessive about the colours of the flowers and go to great lengths to alter their own shrubs colour by adding iron minerals to the soil around the hydrangeas , Epsom salts when I started out was great for changing to a blue colour but this effect generally only lasts a season and I don’t bother about which colour flower  and I am happy with the limited success I have from our small amount of hydrangeas and I consider getting them to grow at all as a success ! 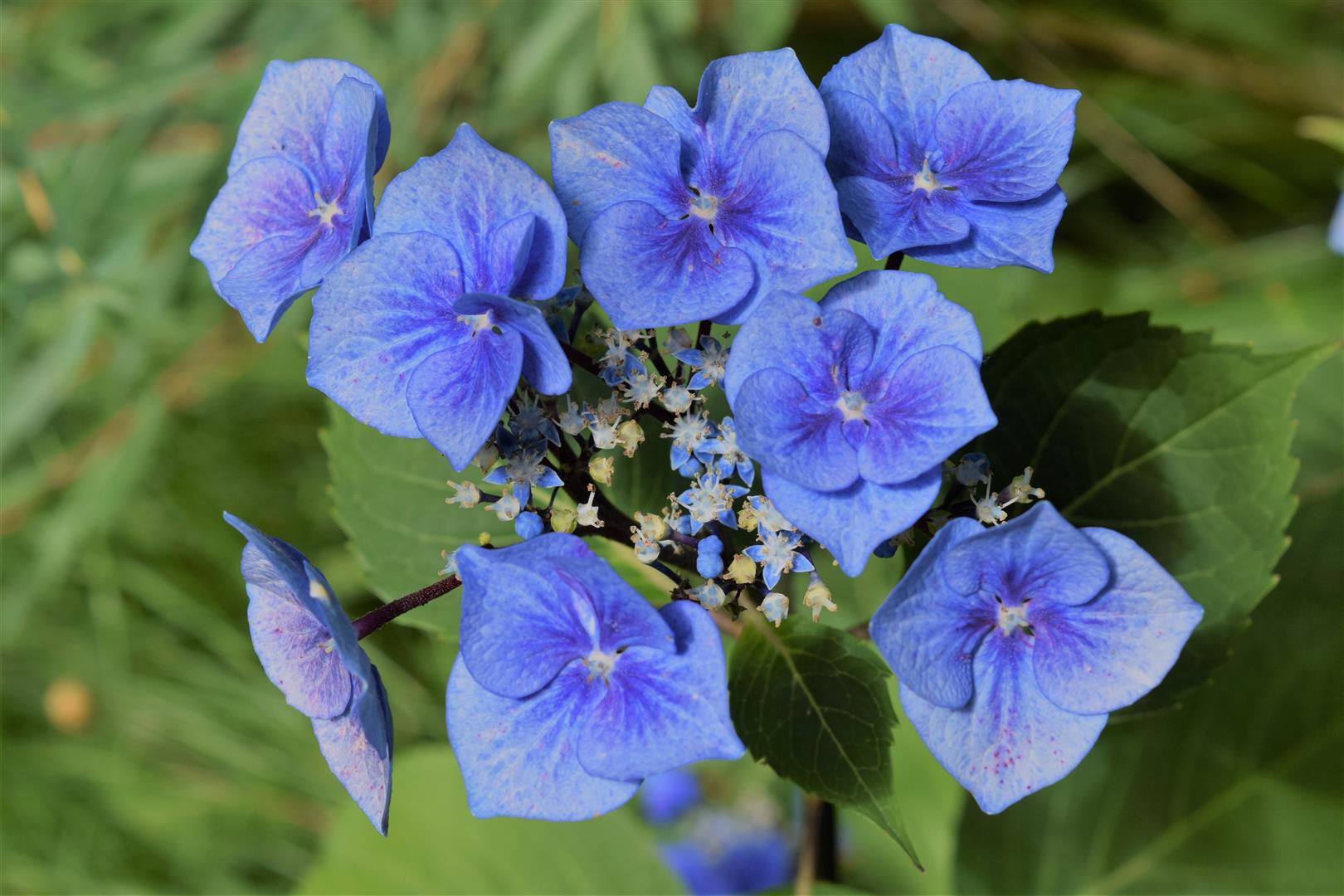 I saw some ten year old news sections from the Sunday Times in the shed recently and looking through them out of curiosity I was struck by how wrong most of the then political commentary has turned out to be especially in Syria and the Middle East in general … not so with garden writing which seems timeless and I often read articles written by the likes of Vita Sackville West in the 1950’s , Christopher Llyod in the 1960’s and 70’s , Dan Pearson , Helen Dillon and Robin Lane Fox  from the 1980’s and 90’s and they are still relevant today and these writer’s advice never dates and of course because these writers are not only gardening enthusiasts and experts but what makes them so readable is that they are also great writers with great individual style and a valuable introduction to gardening for anybody is to look up editions of these five writer’s collected articles for the various newspapers they contributed to on a weekly basis be it the Sunday Times , the Observer , the Guardian and Telegraph while Hellen Dillon wrote for the Sunday Tribune and you regularly see them for sale in charity shops or online as used books with Amazon .

Snezana’s favourite tree in the garden is this walnut tree , Juglans variety and she is vert proud of the fact that she lobbied hard for me to plant it as our climate is not warm enough for them normally and while this one has been planted for ten years and has grown magnificently in that time , this year because of the unusual  heat for the last ten weeks is the first where it has ripened fruit . I like the tree for it’s white bark and lush leaves and we have planted five more in various parts of the garden hoping to duplicate the success of this one but we have found that they can sulk for four or five years after planting then suddenly take off and in one case thinking it had died in late August a few years ago I cut it hard back and now it is growing into a monster . 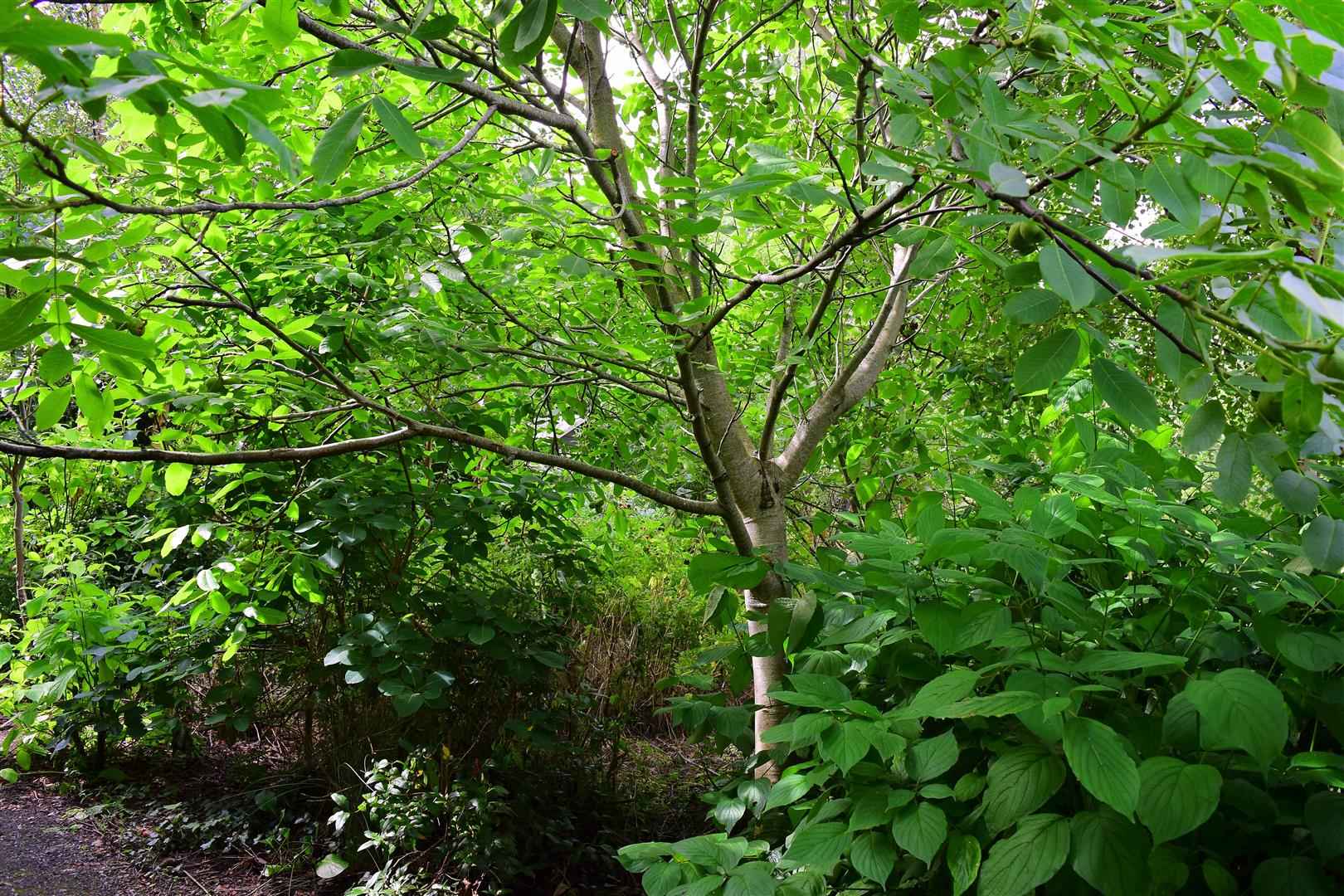 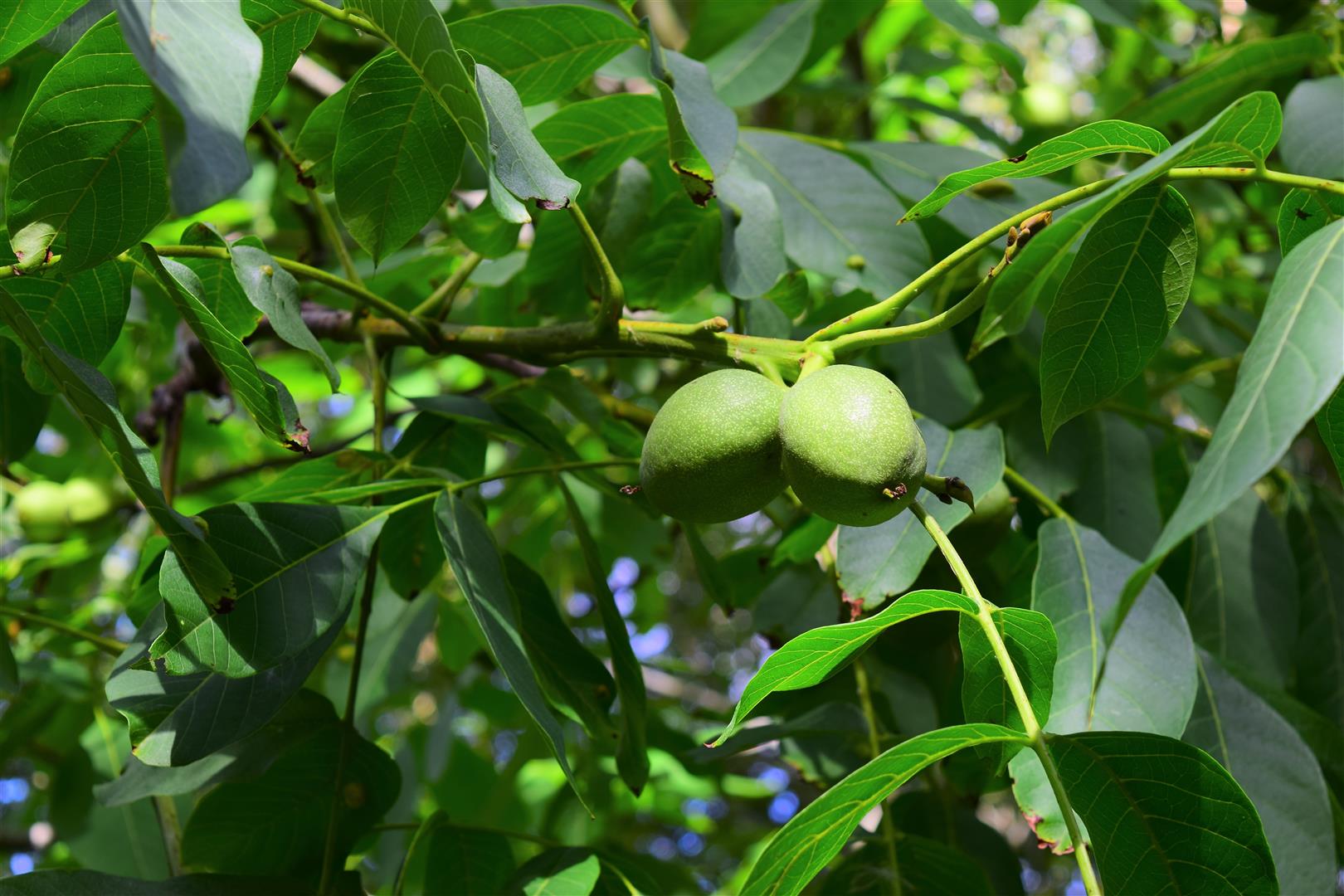 A once in a generation thing in Irish gardens , a ripening walnut ! August 15th 2018

August foliage and colour in the garden 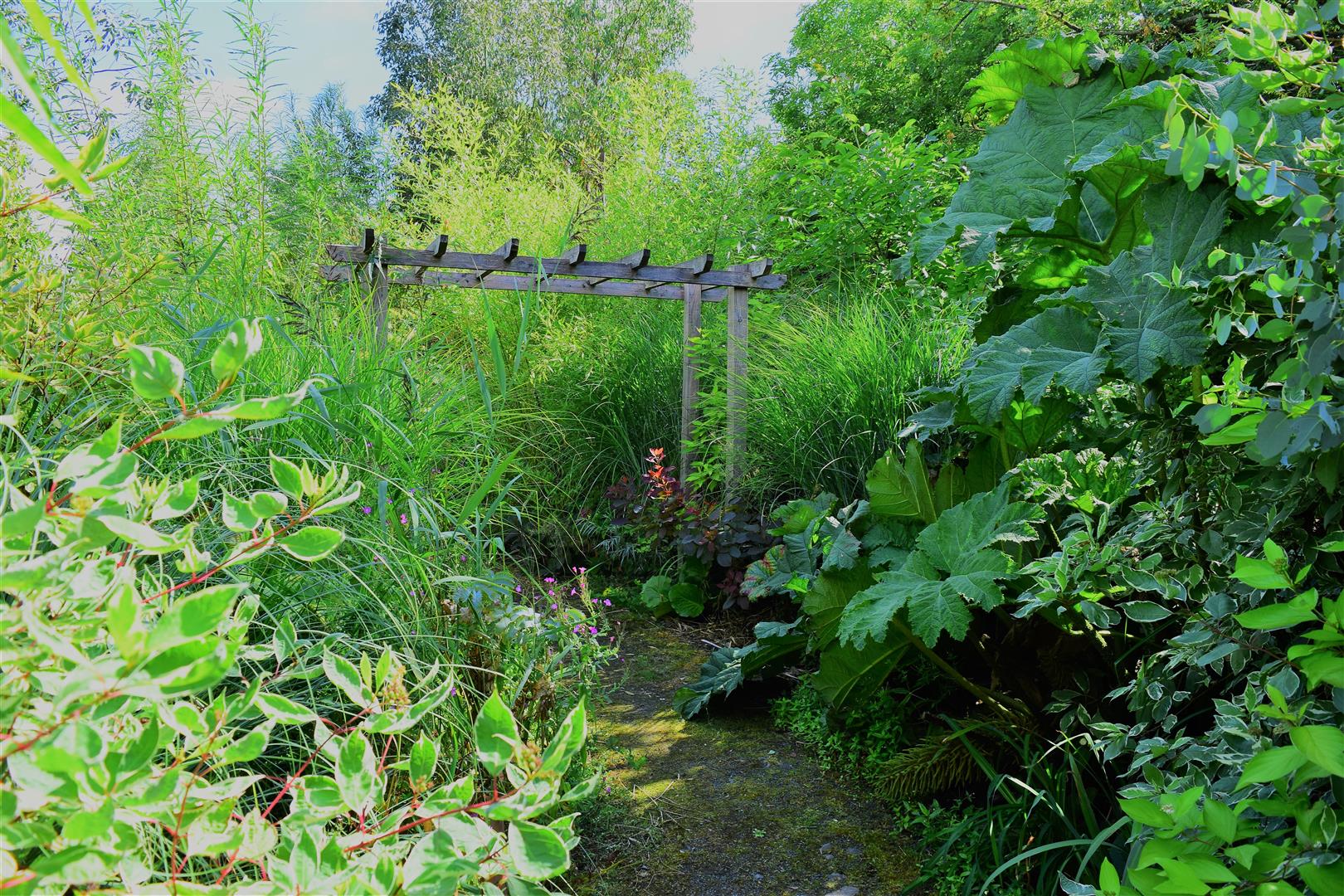 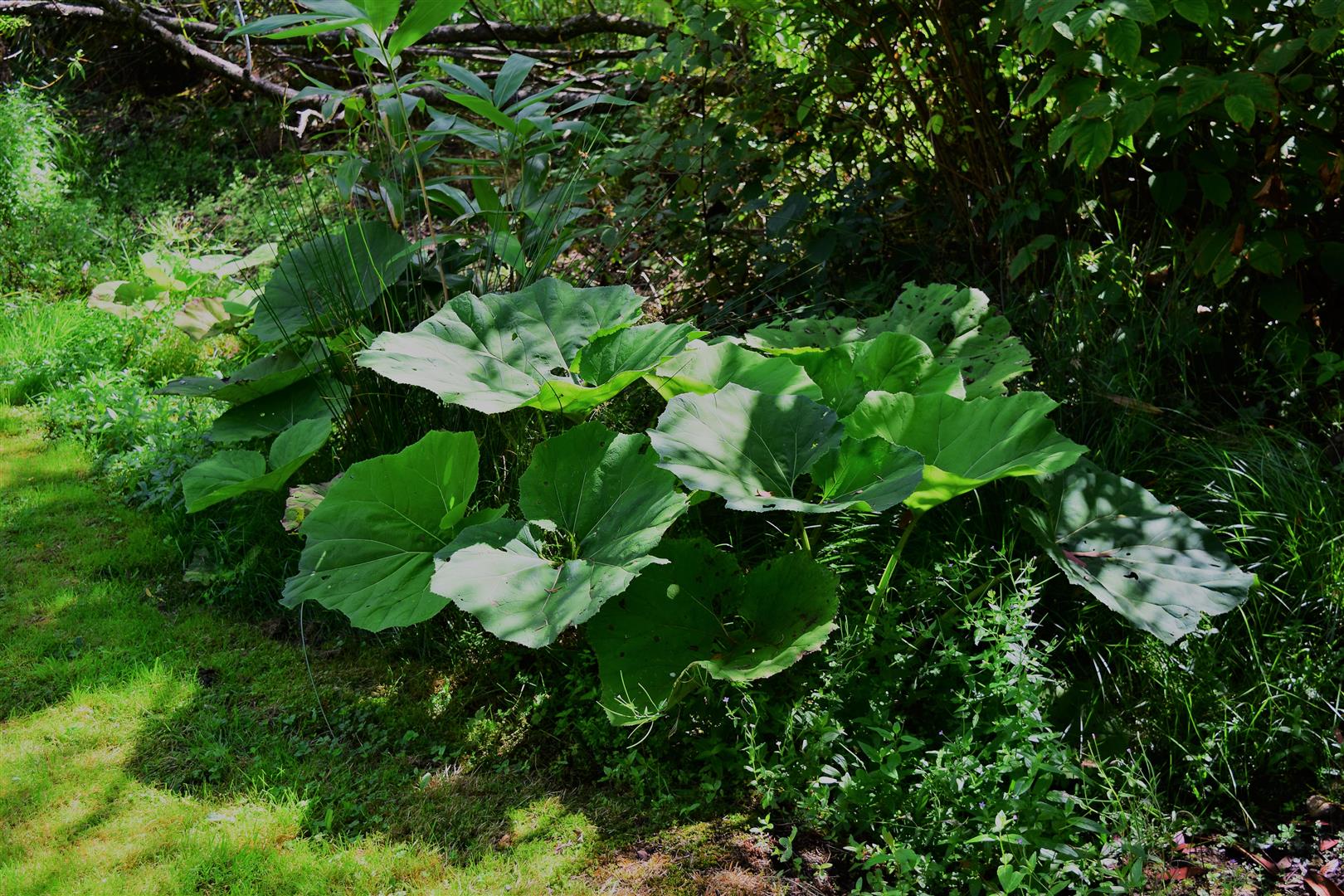 Butter burr along the stream , August 2018 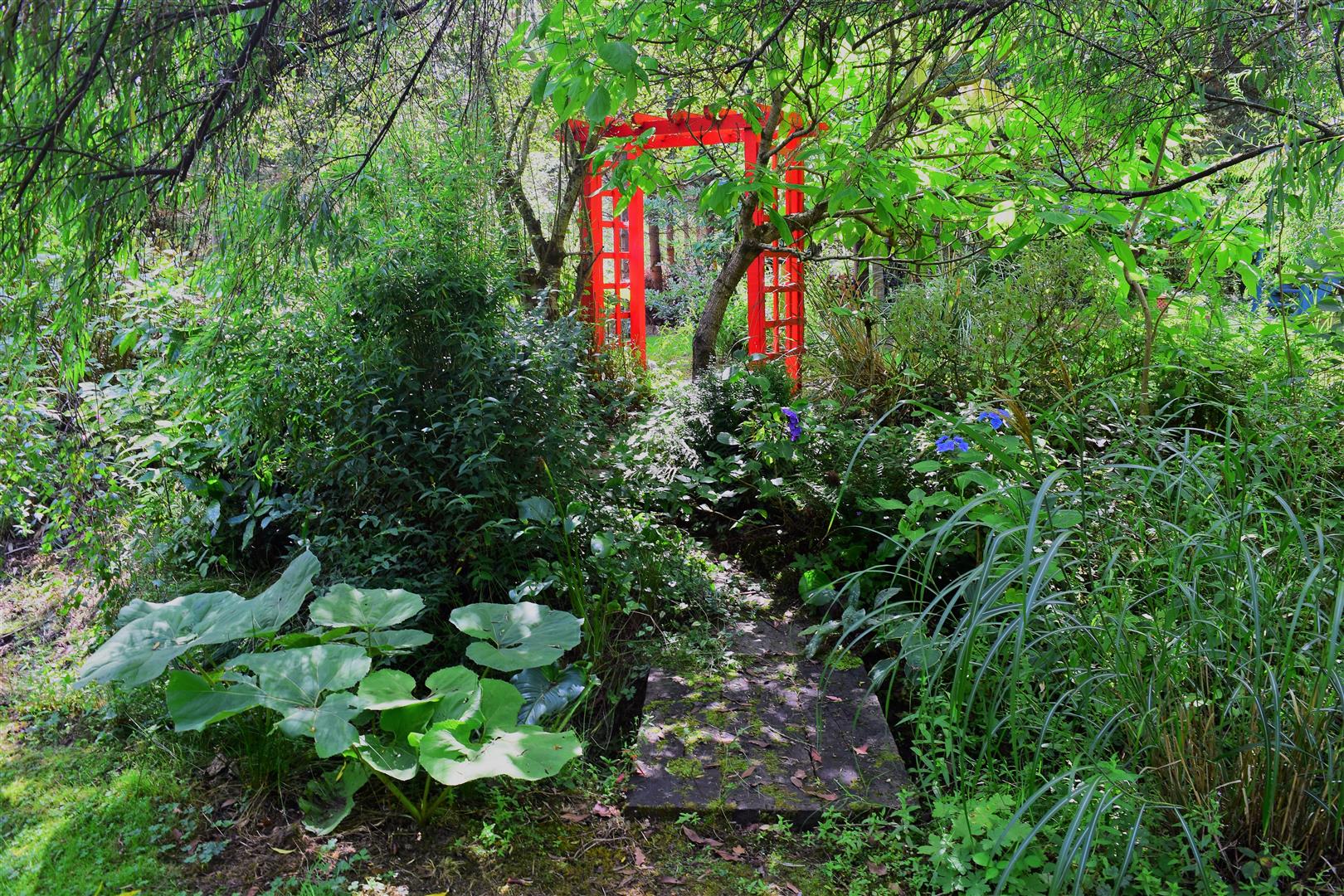 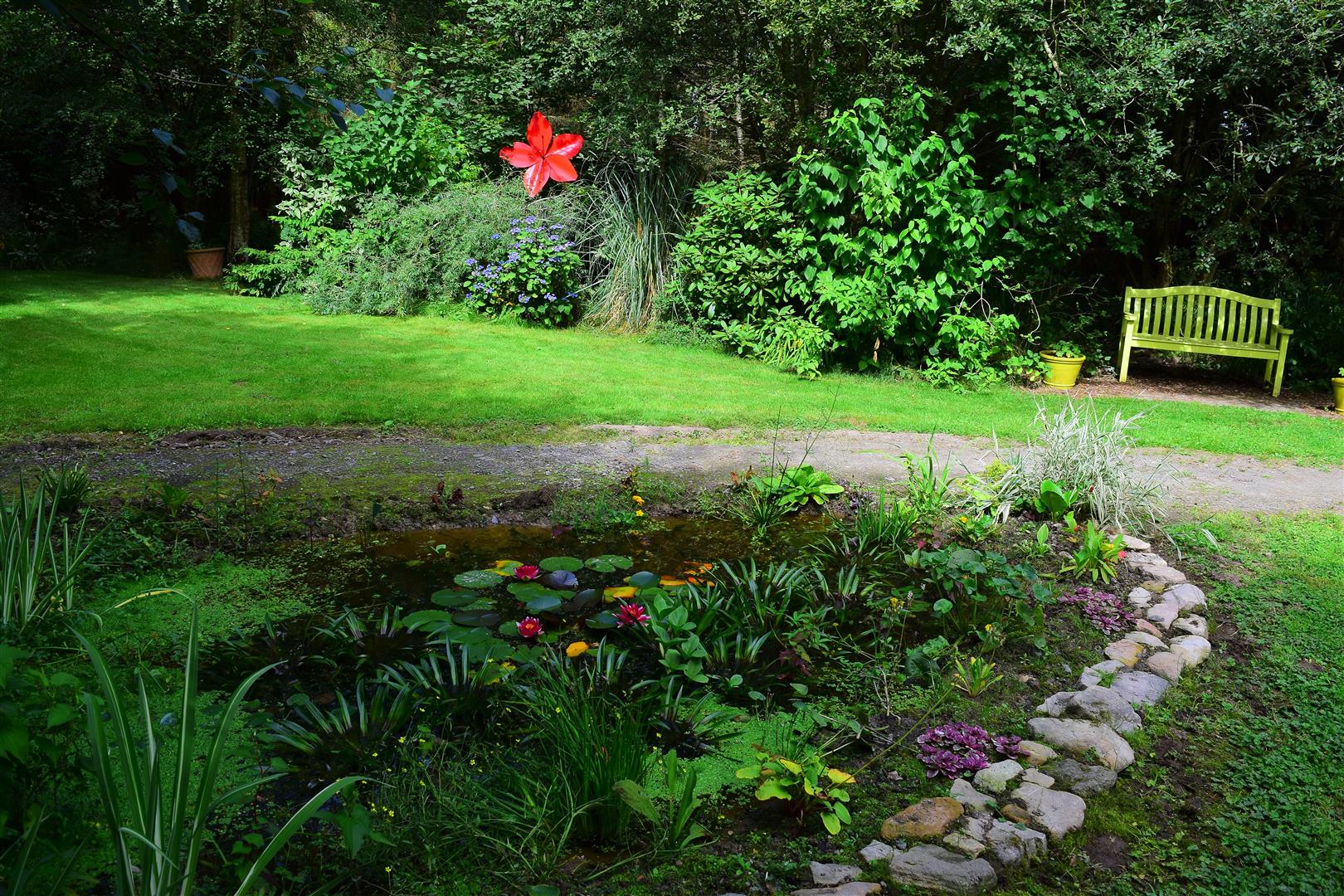 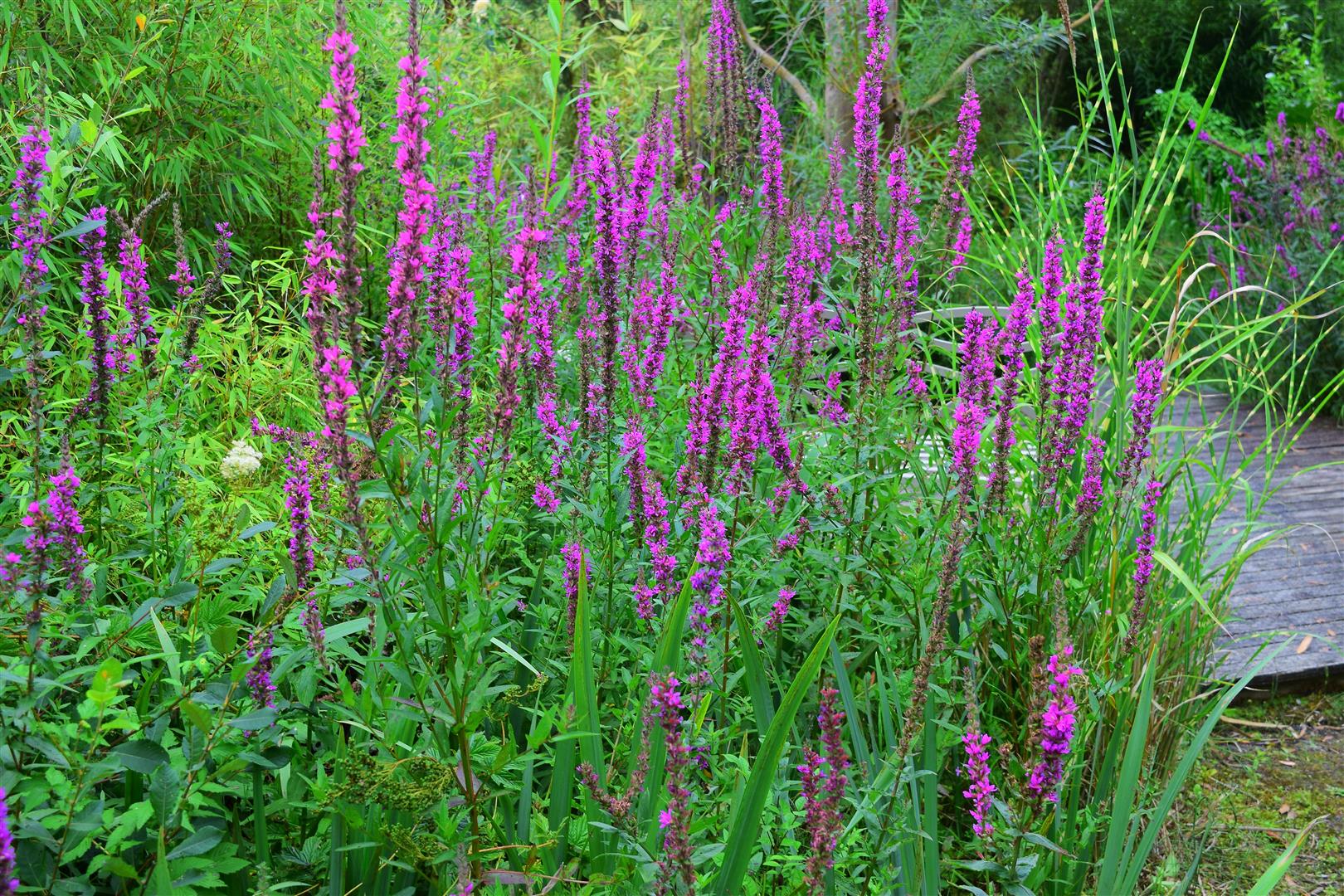 I took home these car registration plates from Sarajevo when I worked there from March 1996 and they now innocently decorate the garden shed but they represent a bad time during the war in Bosnia in the early 1990’s . Bosnia had split along ethnic lines during the war where even the internal divisions were front line fighting positions manned with mines and road blocks so cars etc.were licensed according to the ethnic divisions Muslim, Croat and Serb  so the top plate with the fleur de lys symbol is Bosnian Muslim and the bottom sign with the Croatian symbol , the sahovnica , represents the illegal statelet Herceg Bosna , I also had a serb plate with cyrillic writing from my time in Brcko but the youngest son , snatched this a few years ago for his own collection .

These separate plates had their purpose during the war when nobody strayed across front lines without risking their live but they persisted long after the war had ended because all three nationalist groups in Bosnia wanted the separation to continue so that normal mixing and movement of people wouldn’t begin again … crazy as it may seem but these nationalists , Muslim , Croat and Serb , did not want normality to ever come again to Bosnia and in fact the International Community had to force the issue in 1997 so that a new vehicle registration system was created for Bosnia, computer generated and totally anonymous to region so no one could tell who was driving a particular vehicle and gradually people could cross ethnic lines trouble free and Bosnia could move to what passes for normality today in Bosnia . 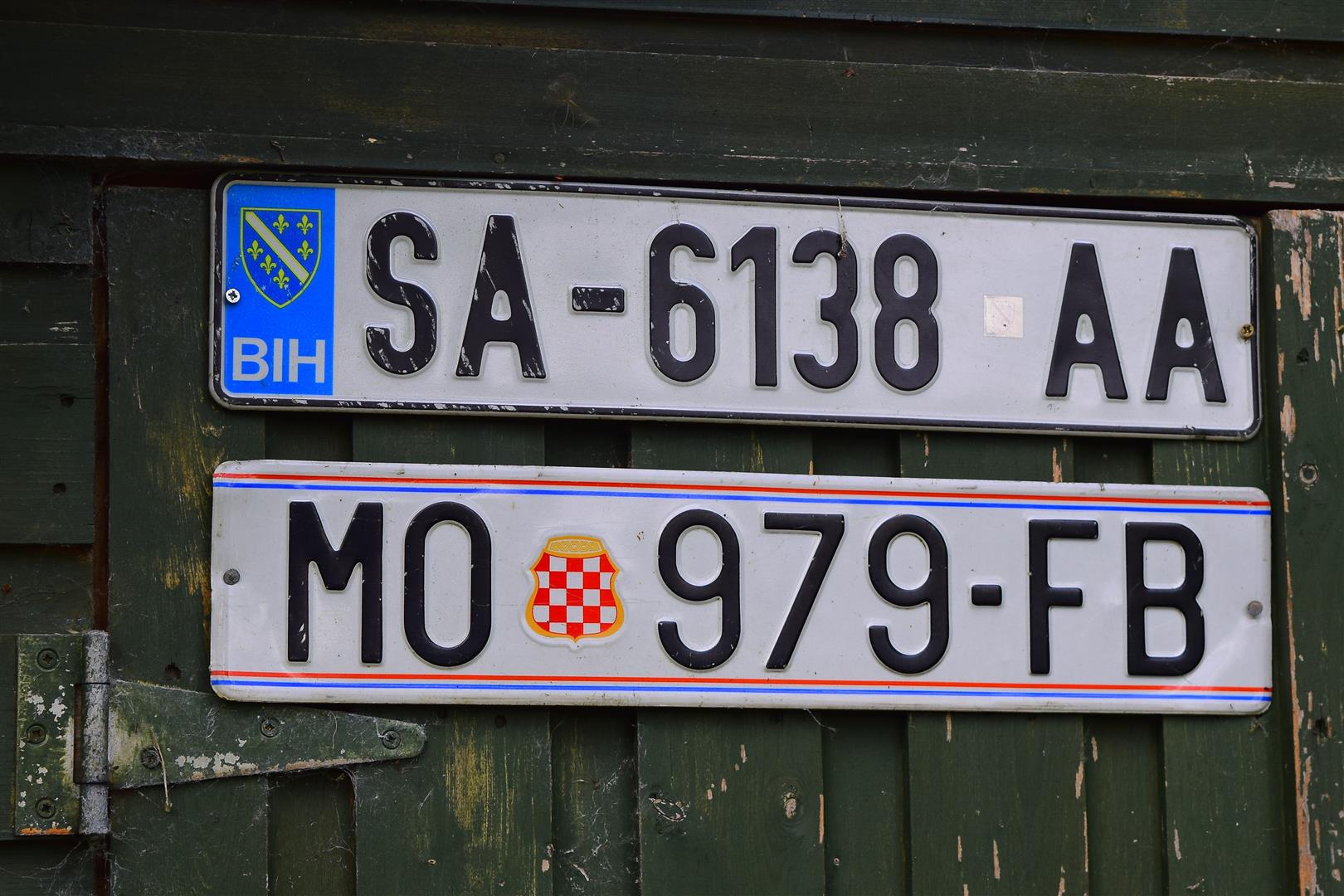 I deliberately used the words ” what passes for normality ” as Bosnia today is far from normal , a country where I worked for ten years and whose people , culture and history I loved  is slowly sliding towards conflict again spurred on by separatist movements in Banja Luka , Mostar and with huge outside interferance from Russia on behalf of the Serbs . Ethnic divisions are worse than ever and the entire political system seems to be unravelling … I travelled to Bosnia a few weeks ago  , my first visit in over ten years and crossing the border into Hercegovina at Oraholje brought back memories of working at this border crossing for a year in 1996 when I was based in Southern Bosnia with the EU CAFAO Mission . Back then we thought people would move on from the recent war bud sadly today 22 years later tensions are running as high as ever and the Bosnian Croats and Serbs are looking to secceed and join with either Serbia or Croatia leaving just a small part mainly around Sarajevo for the Muslims … the real danger is that while this would not have been allowed by the EU or US in 1996 today with the Islamic threat throughout the world it is a possibility . 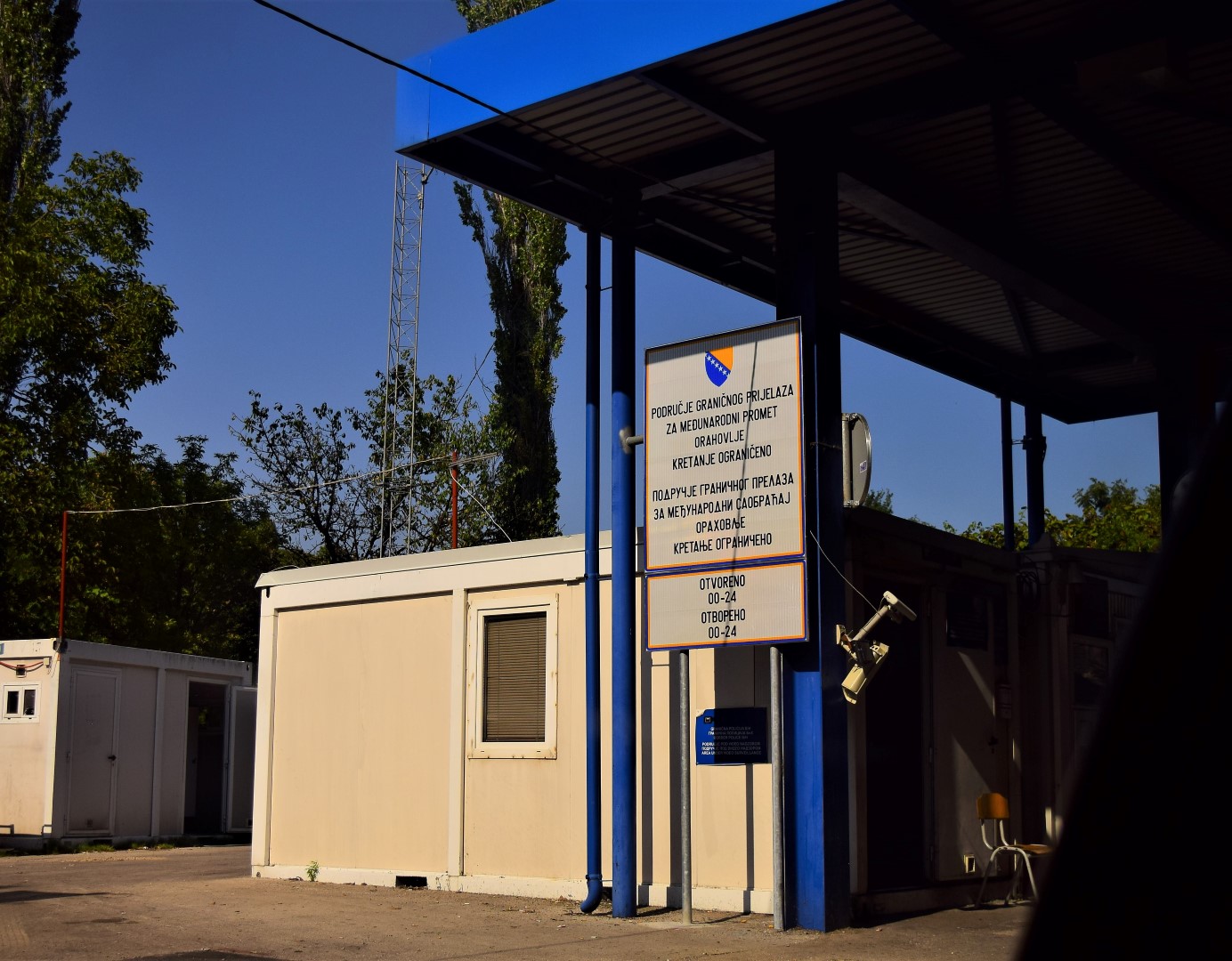 Our visit this time was with local friends , Zdenko and Iva , and we had lunch  beside the Kravice Water Falls on the Trebizat river near Ljubuski and I had forgotten how extraordinarily beautiful this part of Southern Bosnia is and must come back more often in the future . 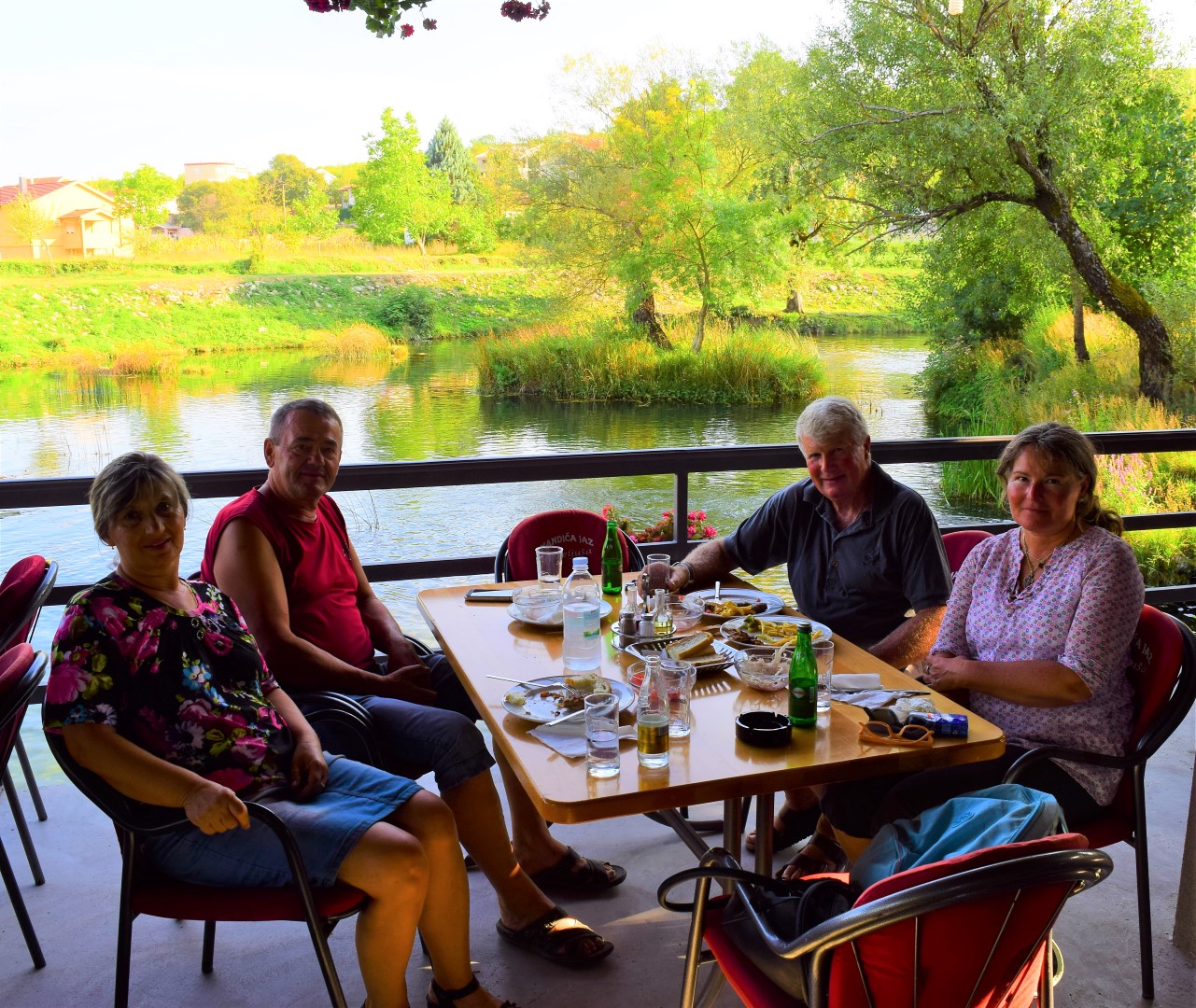 I was also in Croatia in August and added some new planting to the rock garden I am trying to establish for the past two years , progress is slow due to the heat and trying to establish plants without regular watering is difficult and I lost most of what I planted the first year because I planted in May and most perished in the searing heat of July and August that year so learning from that I now only plant from September onwards and the plants have a year to establish in the ground before the real heat starts . 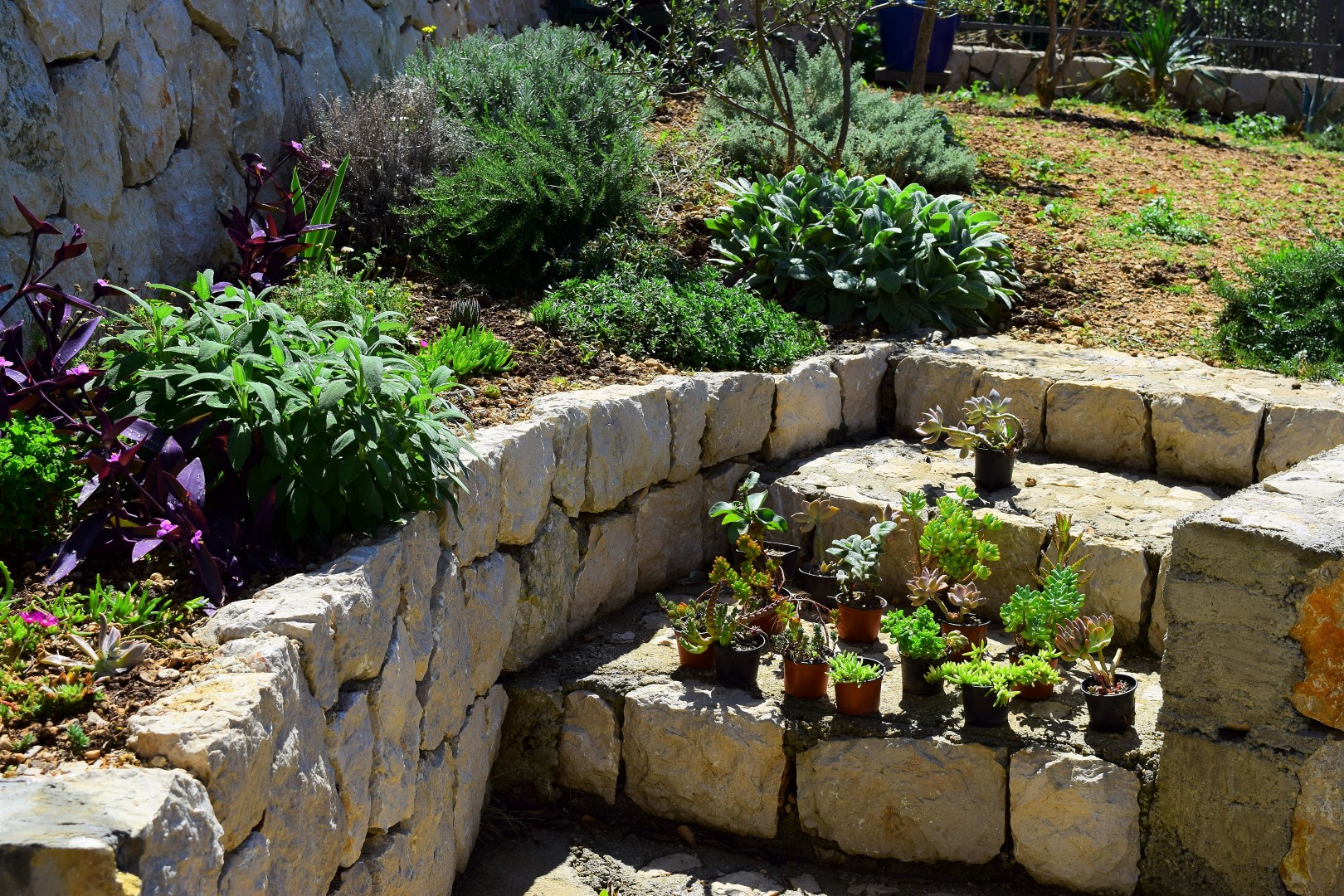 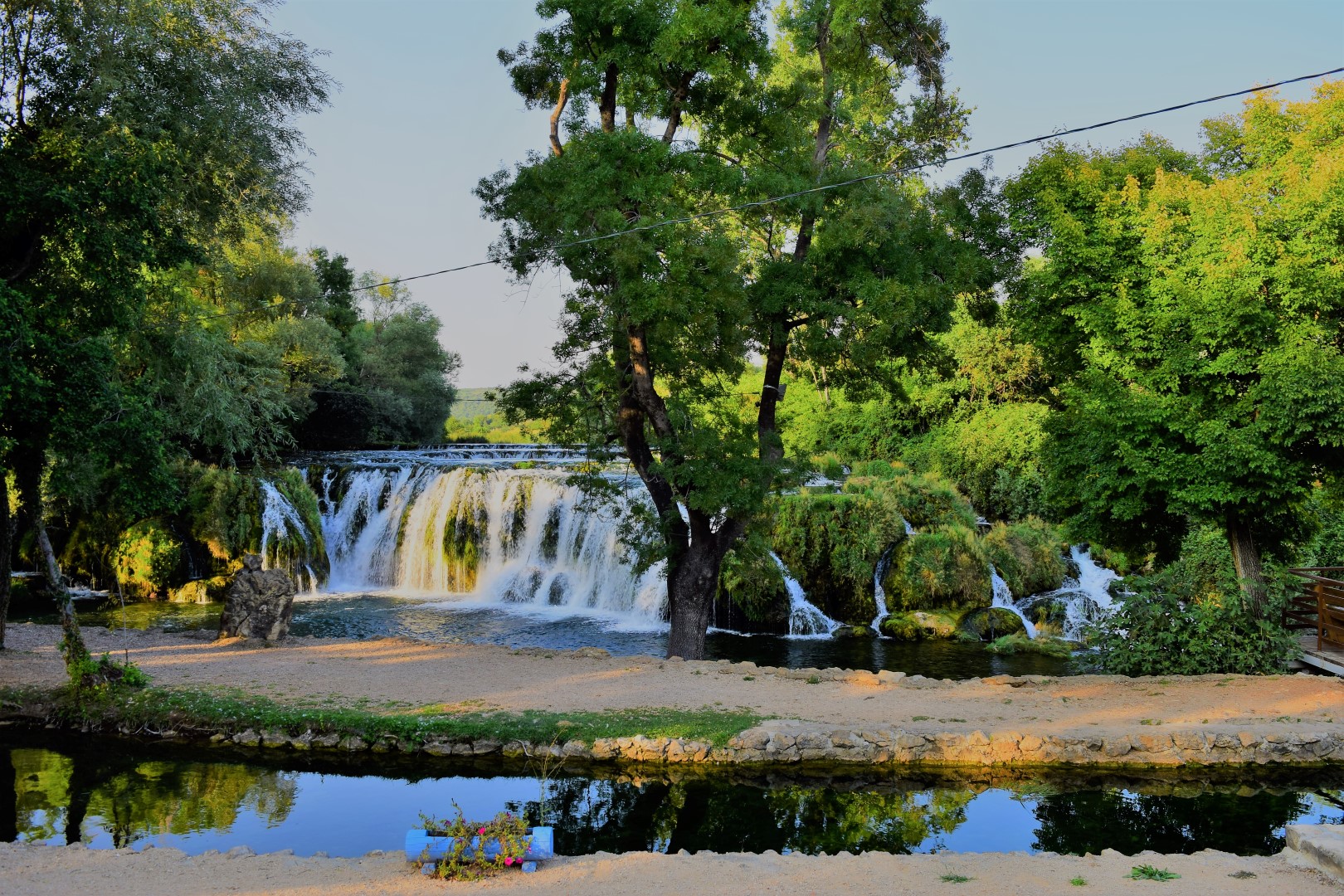