My Gardening Week November 30th 2017 …. The Petrovska Garden Chain Saw Massacre and what does that have to do with India ?! 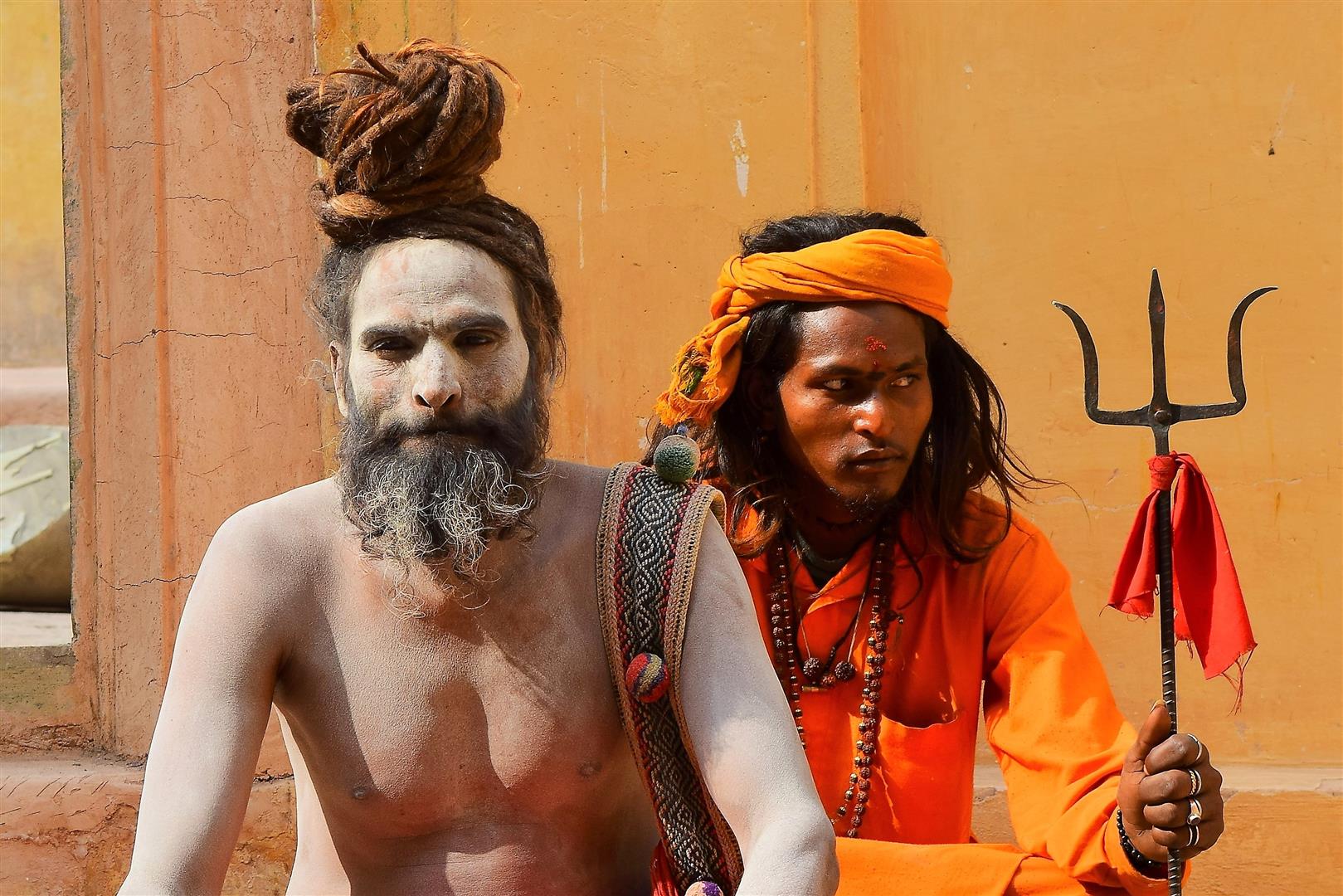 With all the talk about destruction in the garden in late October when Hurricane Ophelia hit Ireland I have an unusual story of survival to report here … a few years ago inspired by Monty Don’s showing of a banana plant in his garden in a Gardeners World programme I bought and planted a banana plant in a pot in the gravel garden , fussed over it from Spring to November , made sure it got the best of watering and feeding and dutifully took it indoors in November , cut it back and covered it in fleece to over winter as Monty instructed … it popped its clogs by January and very disgusted at the cheek of it after such cossetting I dumped the remains unceremoniously in a dark corner behind the shed in an area reserved for black bags of leaf compost and like a jealous lover vowed never to have anything to do with banana plants in future .

Last week I was searching out some compost behind the shed and there it was happily growing away outdoors in November in semi darkness … sometimes a bit of tough love is what both would be lovers and banana plants need !! 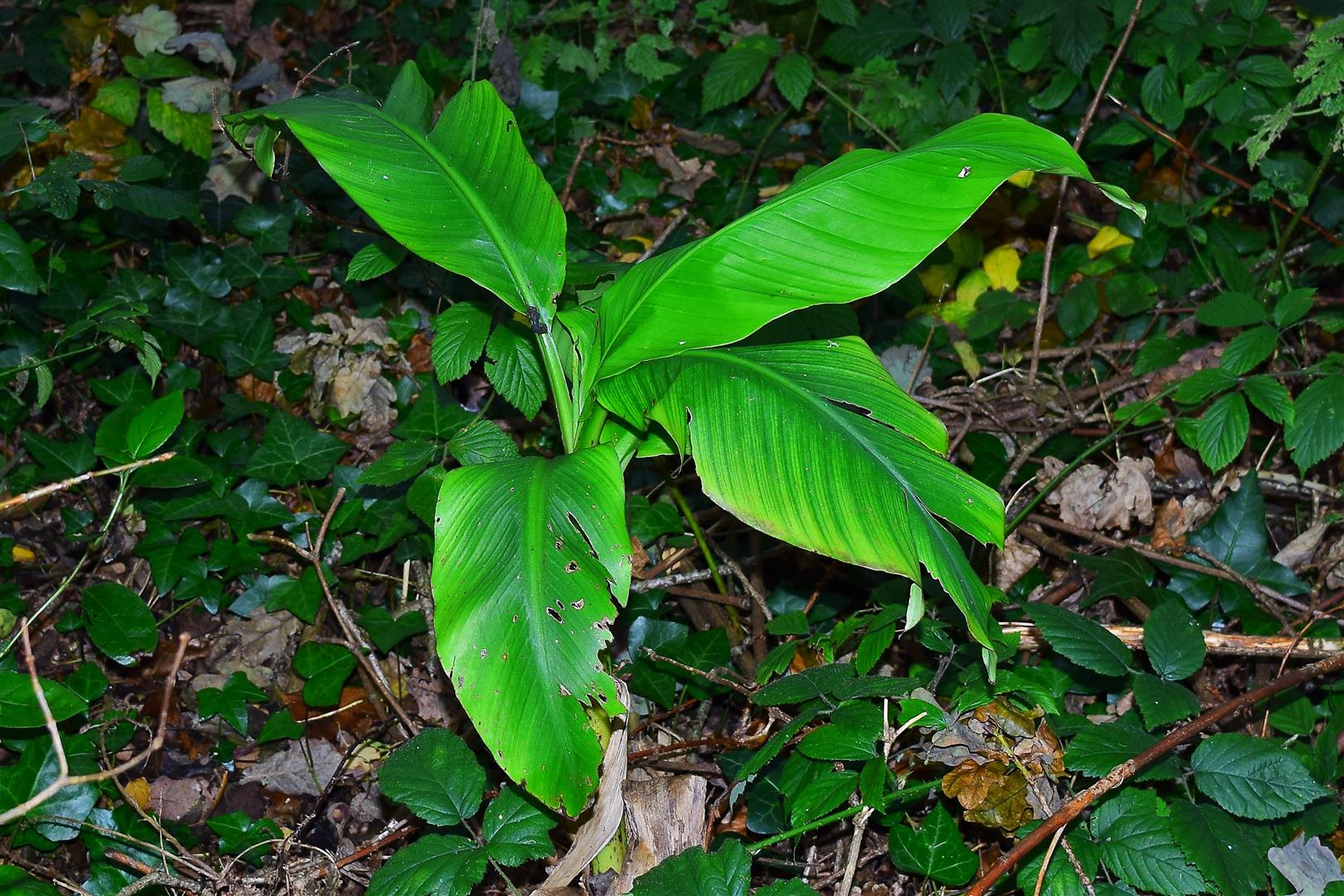 The banana plant that has survivied on the compost heap for the past two winters , November 9th 2017

And speaking of would be lovers here is a winter flowering pampas in the Top Field , a reliable plant the pampas which likes a wettish soil but not water logged and definitely not dryish , gets a bit blown about by the wind after Christmas when the vigour is going out of the flowering shoots and while not in the first rank of shrubs , it is great at the back of a border to add a bit of height … I tend to grow them in groups on their own as they add bounce in the dark of January / February when I cut them down although older gardeners swear by burning the entire clump to the ground each spring … I tried it once and the plant definitely benifited from it … and the lovers bit ? … well there was a legend in the 1970’s in urban English gardens that a single pampas in the front garden was a discreet signal to like minded people that the house owners were up for a bit of swinging … all I can say is it never worked in any of my gardens !! 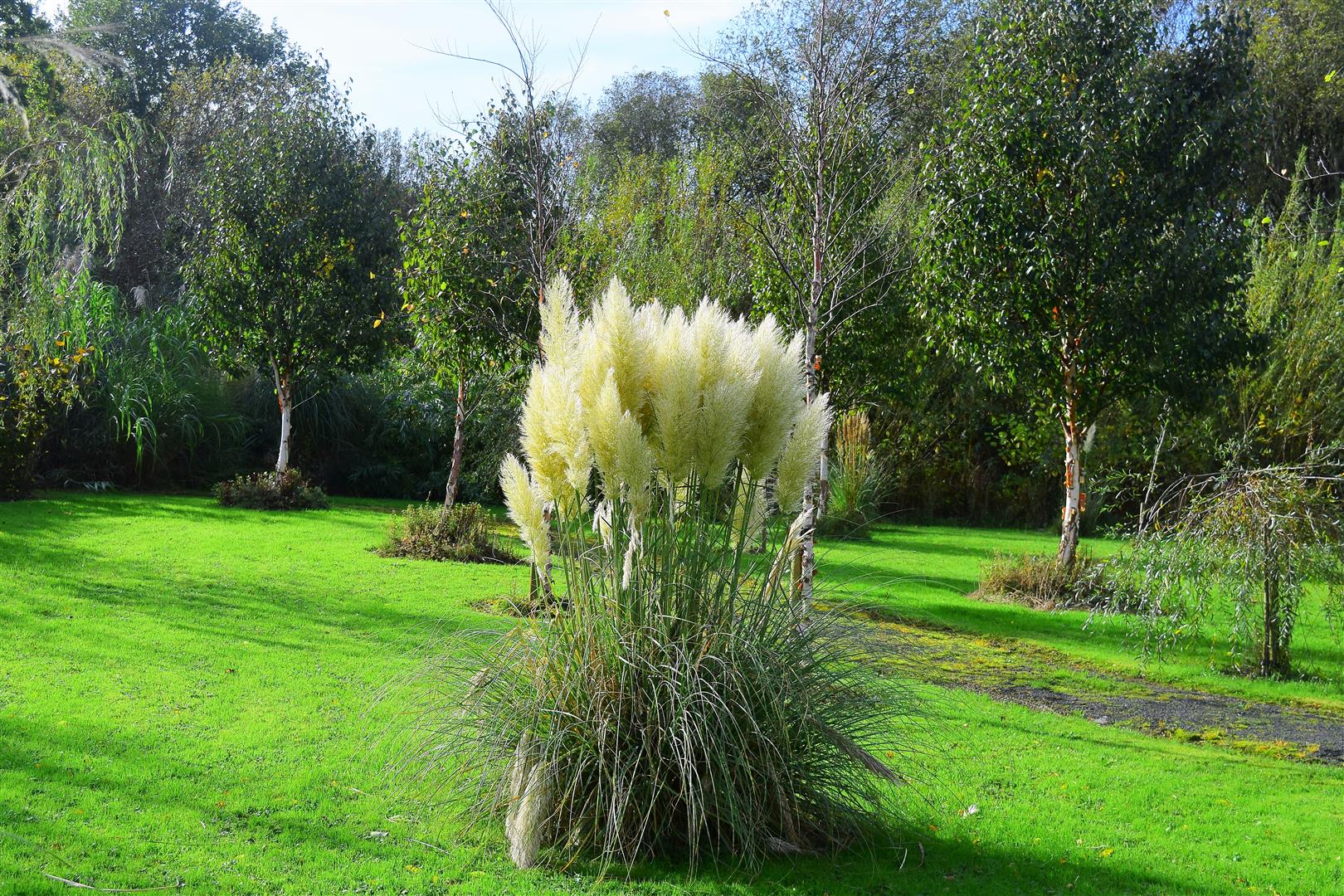 Who loves ya Baby ? Pampas in the top field 8th November 2017

This month I finally gave in and bought Snezana the birthday present she has wanted for the past fifteen years … her very first chain saw ! I am pathologically afraid of chain saws having in my early gardening years had a close call with one when it sliced right through my boot and ever since have refused to use one but she has been banging on about a chain saw for years so eventually last month we got one of the new battery powered ones which are a step down from the lethal weapons of the petrol driven varieties and I have to admit the amounts of small cutting you can get through is impressive and she has quickly become a real meister with it … although when she comes in from the garden I make her hold up both hands and count ten fingers ! 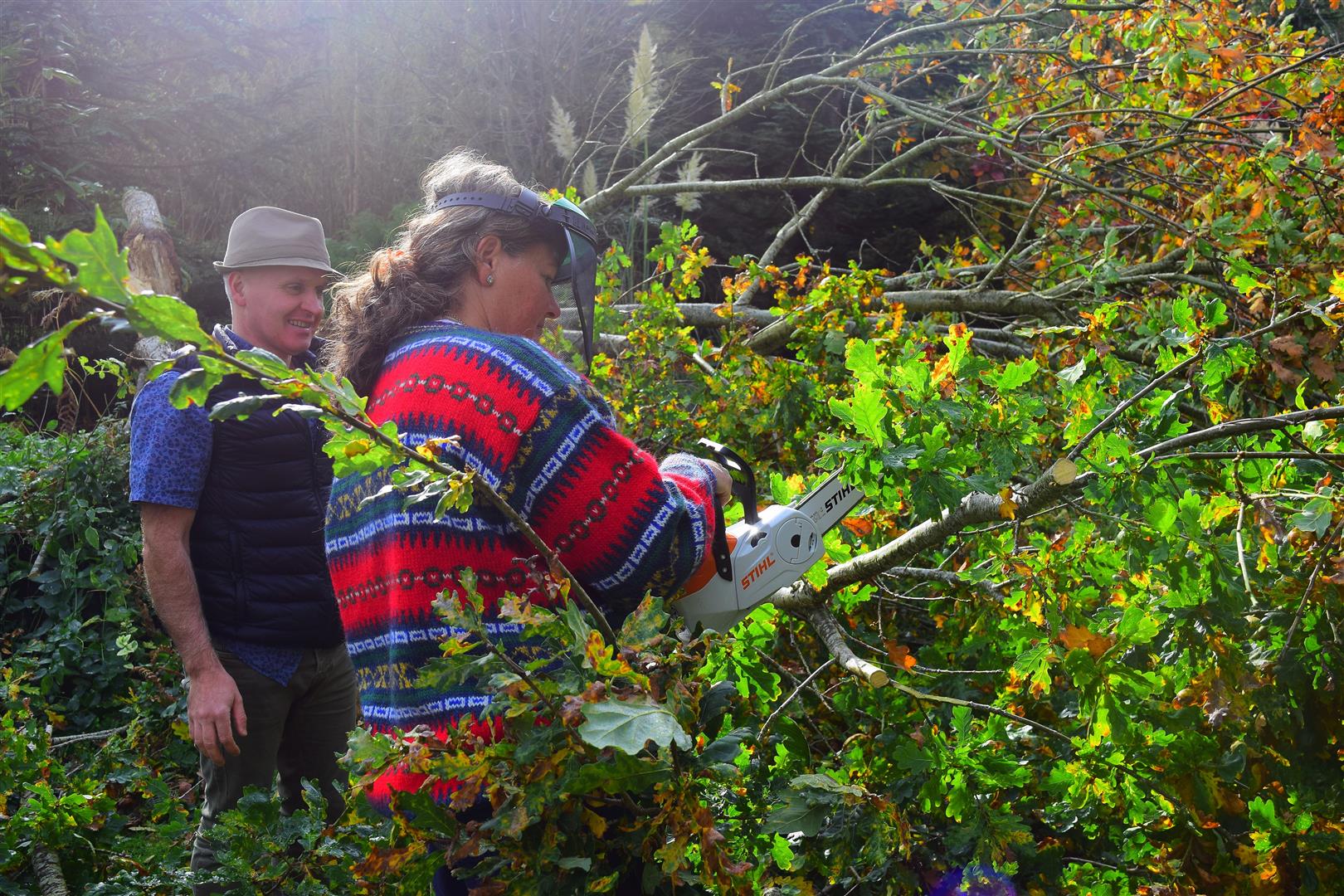 Snezana and her chain saw in the Lower Garden under the watchful eye of Sebastian , November 4th 2017

Her first week of cutting back the willows was amazing to the extent that I wonder now what we ever did without one for the past ten years as we have been able to cut back the willow stems as thick as your wrist all across the wet areas of the garden and apart from providing a lot of wood for saving it rejuvenates the trees and next season will allow the young whippy growth to come through with brighter bark colour … I have been doing this hard pollarding as much as I could each winter with a hand saw but this chain saw is as they say the bees knees . 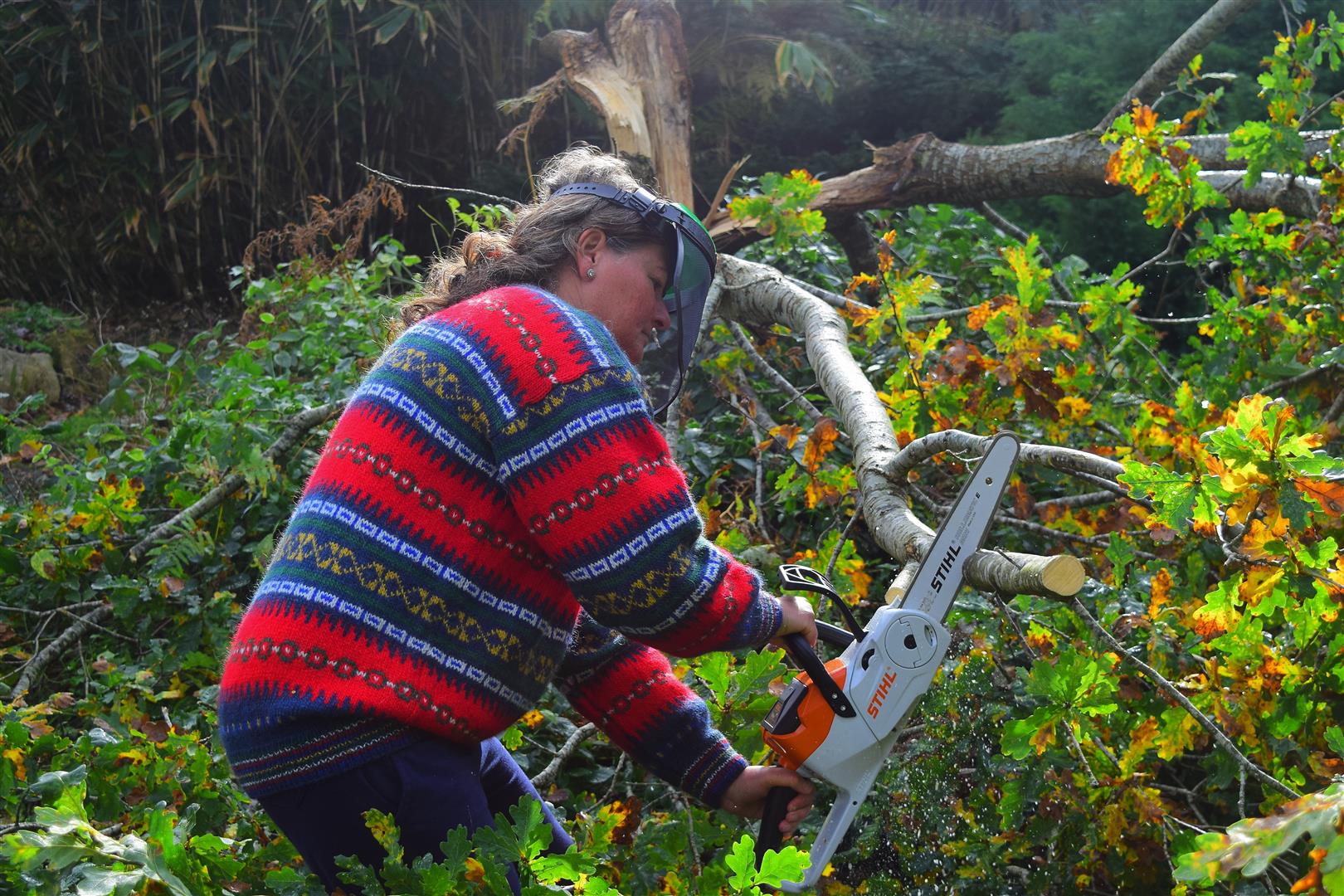 Of course cutting back on such an industrial scale leaves a huge amount of cleaning up to do and the actual cutting is the easy bit but finding a place to store all the debris and branches is time consuming but lucky enough we have a lot of boundary hedgerows which we can bolster up with the cut branches .

In November we headed off to India to cross another country off the bucket list , it did not disappoint and I would go so far as to say that India is a lifetime experience . I had vaguely always had it as a place to visit but in recent years had been put off by all the stories about the way the culture treats women with wide spread rape of women and with local police doing little or nothing unless goaded into action by international outcry … all those attitudes still exist of course but having been there I have come away with a love for the Indian people and having seen up close how the poorer people live I have an appreciation of how well off we are here . 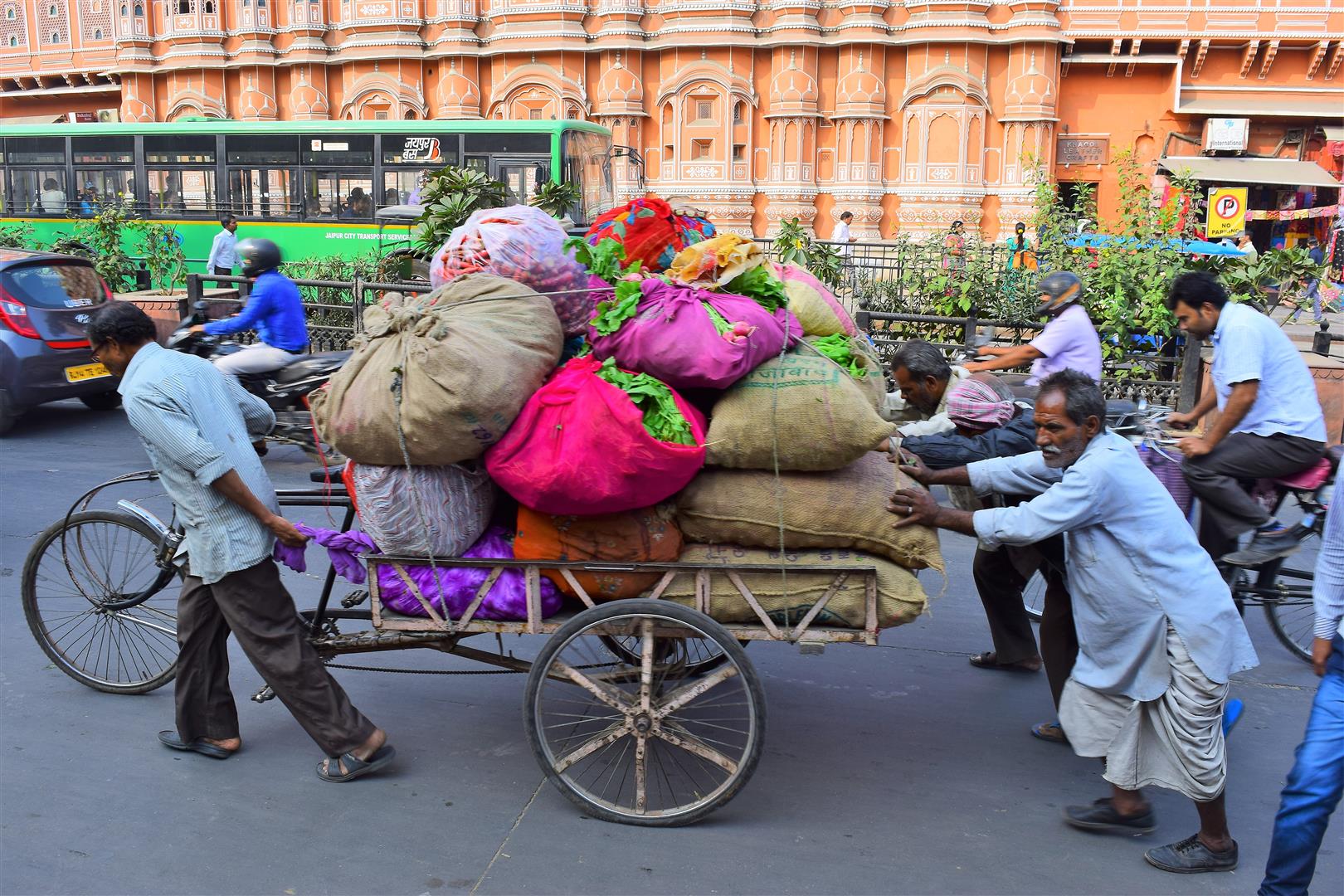 I asked our guide how there is not revolution in the streets and he explained it as their belief and acceptance of karma means either a past life lived badly may have contributed to their current state but more importantly a life lived well may lead to a better existence in the next reincarnation which also explains why the Hindus are so good to their animals with cows roaming freely everywhere and even way stations for old and sick animals being tended to by people who probably have little to eat themselves . 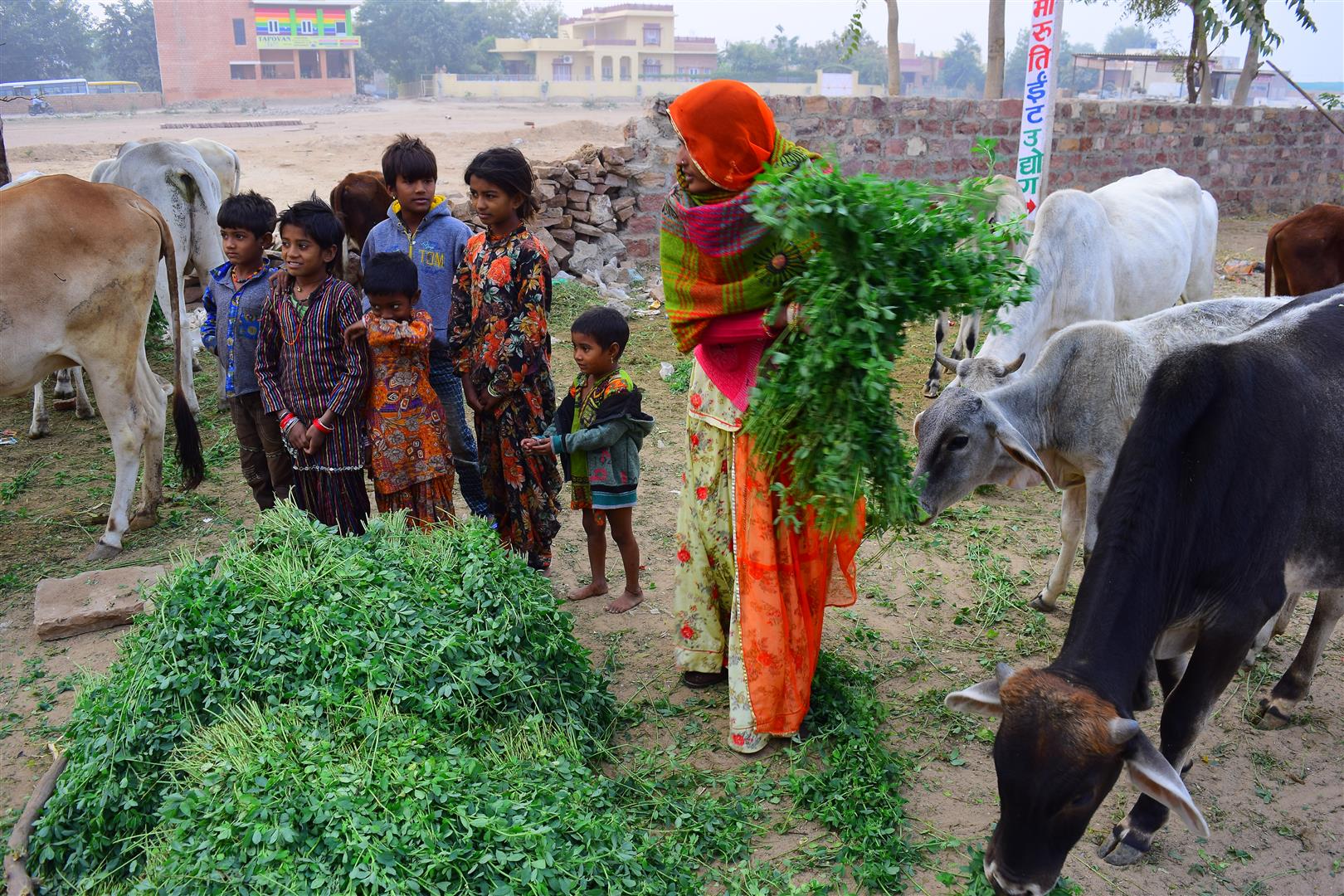 I take a lot of photos of people when abroad always with their permission but have never come across such warmth only smiles all round and in one side street in Jodhpur I came upon a group of over twenty women all sitting or crouched in the street obviously waiting for a meeting with an official and when I examined the photo in detail later I saw that ALL were smiling for the camera . 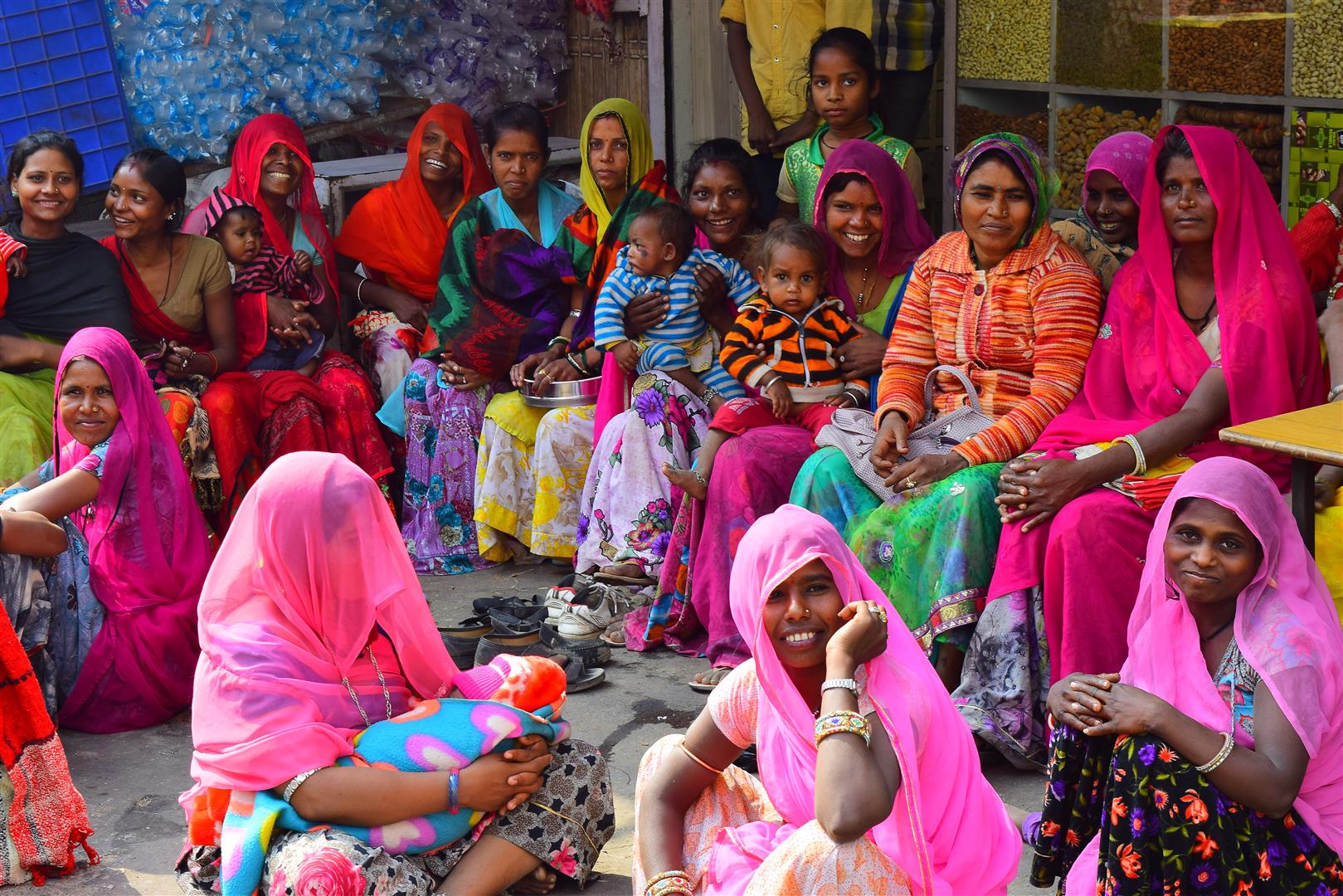 The area we travelled to is referred to as the Golden Triangle ,  smack on the tourist trail almost like Killarney rolled into the Ring of Kerry 1000 % and comprising Old Delhi , Agra for the Taj Mahal and then the Rajastan cities of Jaipur , Jodphur and Udaipur , we saw camels , elephants and lots of monkeys ! 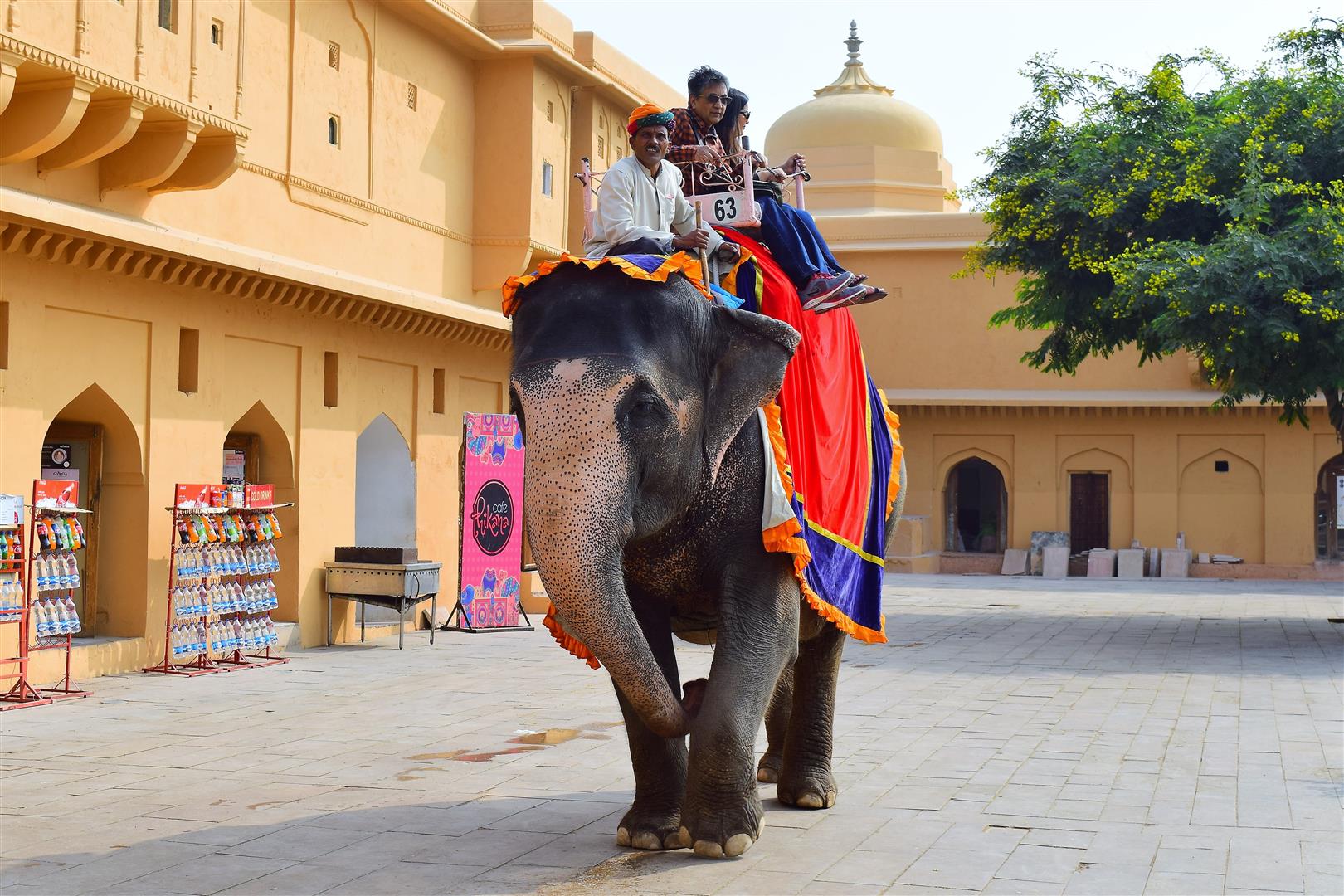 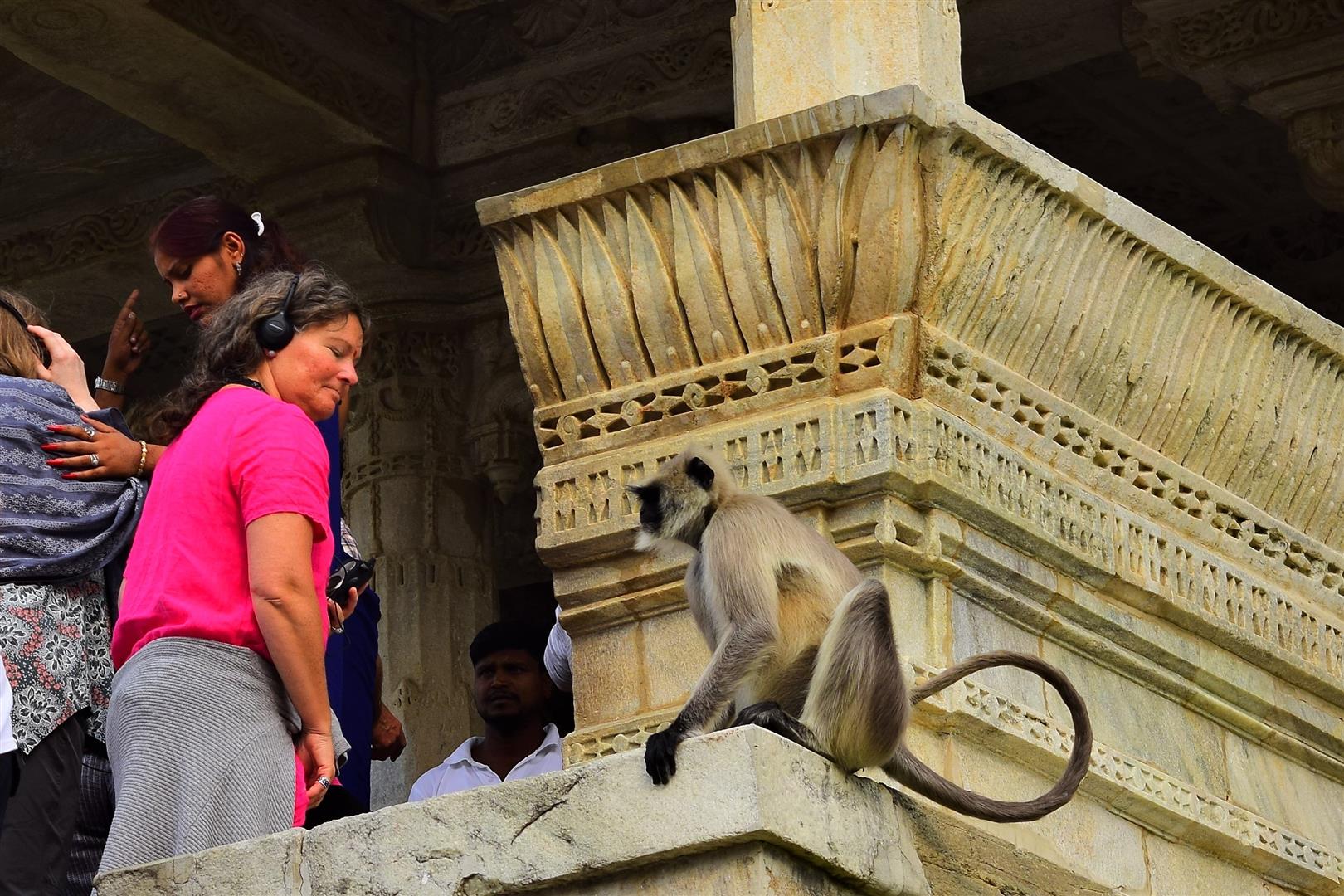 The Taj Mahal like most iconic places is so famous that there is a sense of déjà vu when visiting it , really stunning of course but you see it with 50,000 other people as it has that number of visitors every day of the year . For me it is too perfect almost like a Disney creation and I far preferred the various UNESCO World Heritage Mughal Palaces like the Red Fort and the Amber Fort and yes we sat on the famous Diana seat where sly Di shafted Charles with her winsome smile posing for the press photographers as the betrayed woman !

We visited some palace gardens but nothing exceptional for me as I have worked for some years in the Seychelles Islands where the exotic tropical plant life on every corner was real Garden of Eden stuff but if there was one plant I would bring back it would be the Frangipanji . 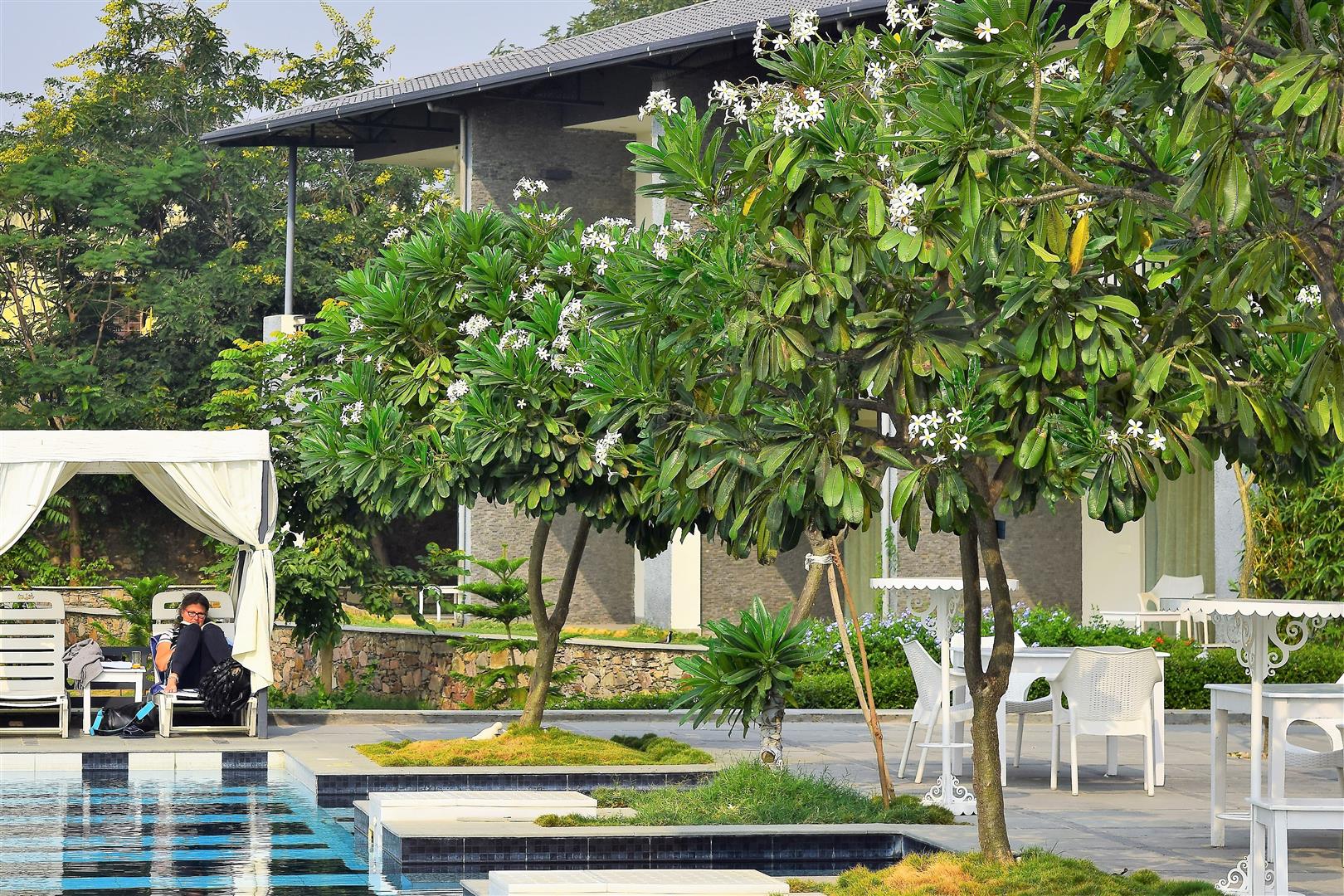 One garden though stood out and this was a series of water gardens , Sahelyion Ki Bari or Garden of the Maidens built by the King of Udaipur in the 1730’s with huge fountains , life size marble elephants and a football  pitch sized lotus pool and this garden for me rivalled the Alhambra in Andaluisa and was really fabulous . 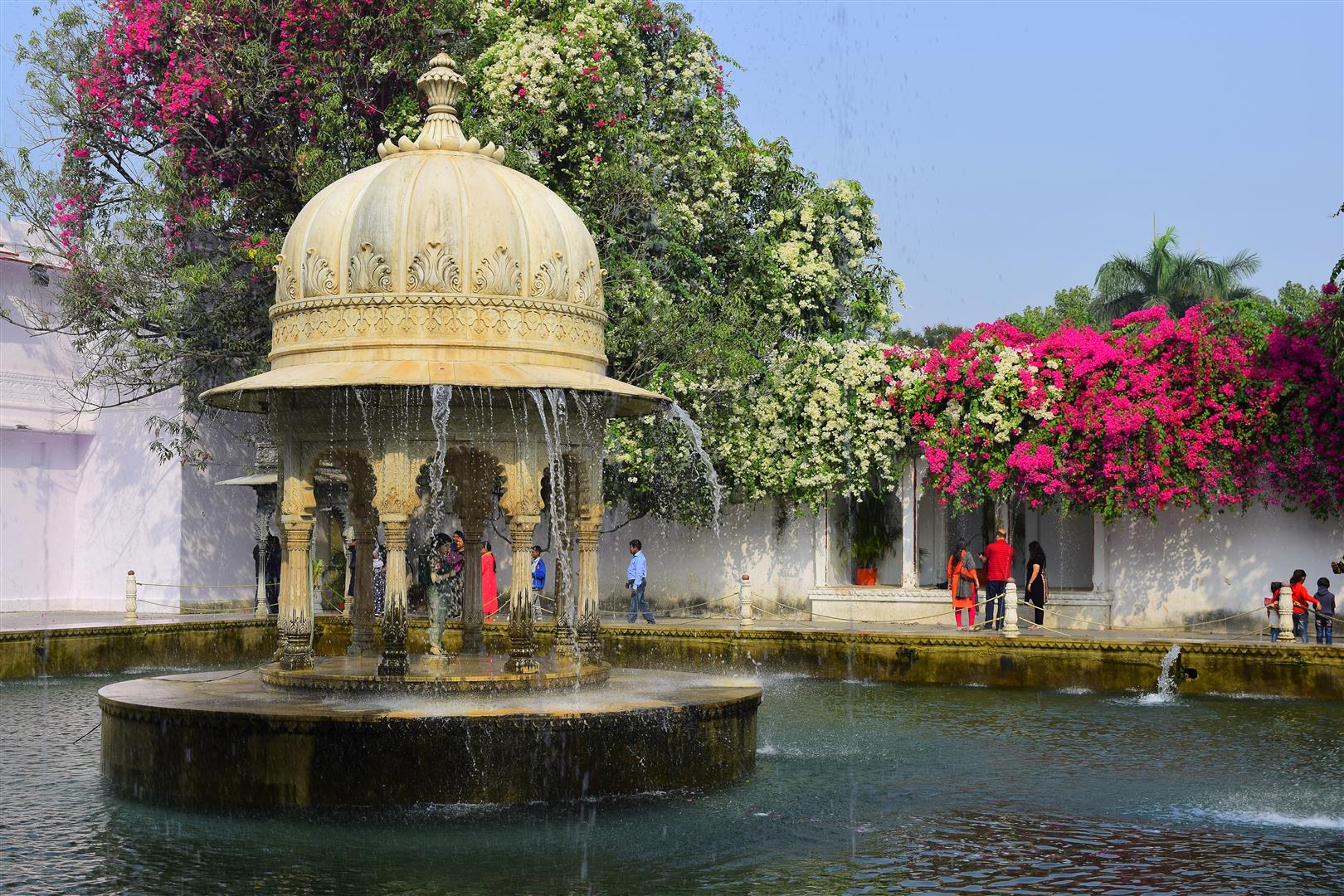 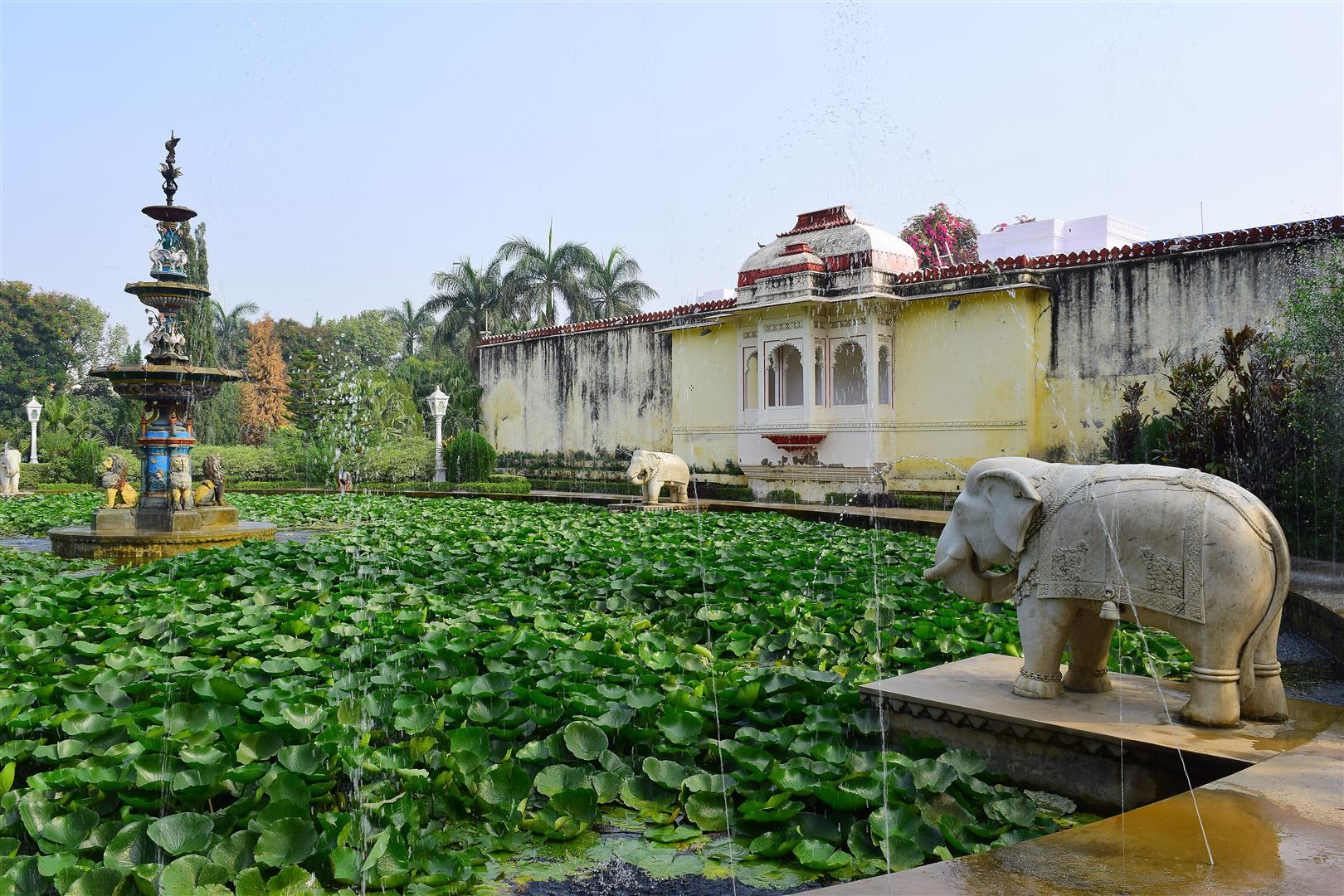 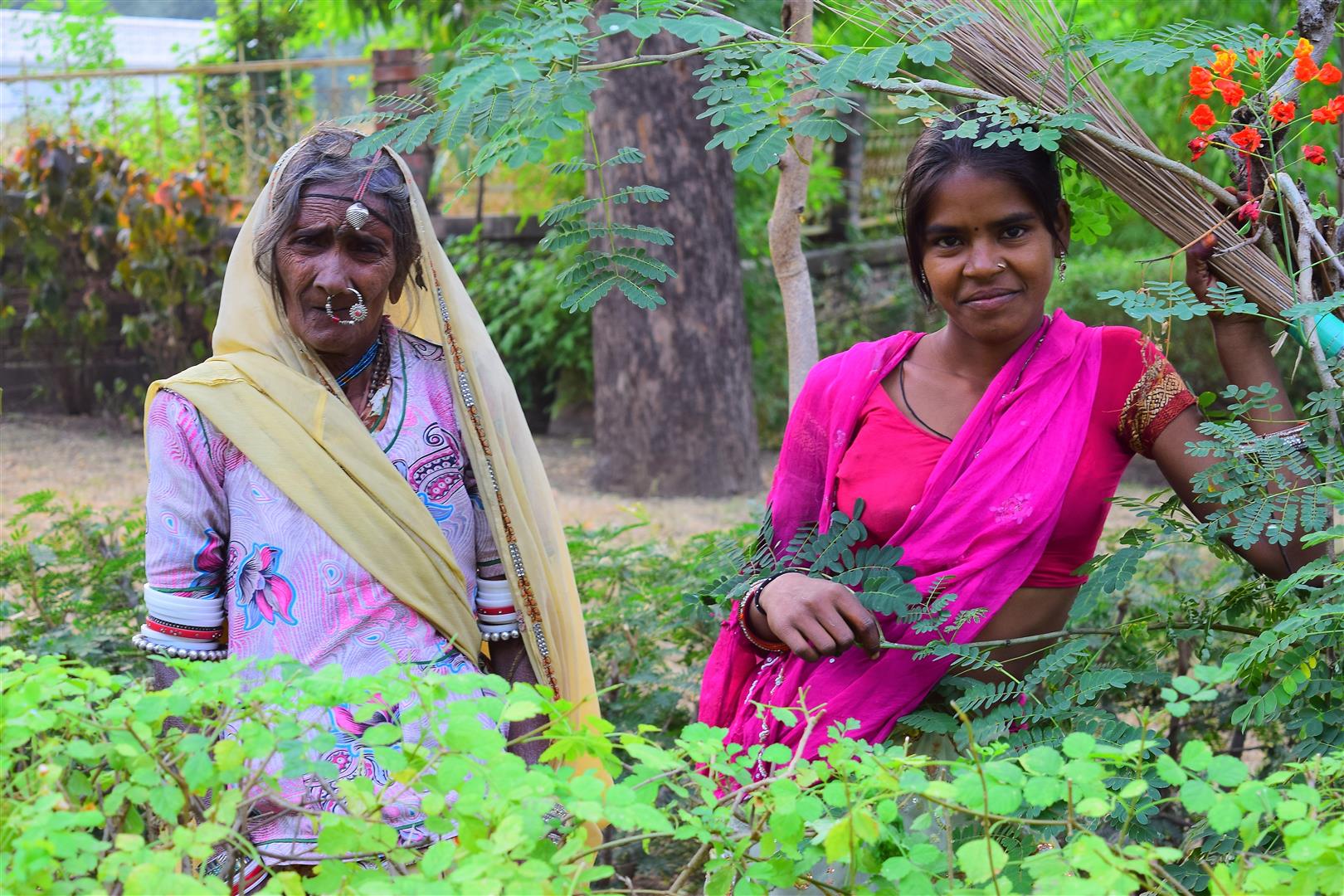 Working in the Garden of the Maidens, Udaipur, India , November 19th 2017

November is my month usually for planting new bulbs and with me daffodils are my bulb of choice as over the years I have given up on tulips as the wet conditions here don’t suit them and they rarely if ever come back after two or three years in the ground and I also don’t find tulips good value as they have such a short flowering period compared to daffodils plus they don’t hold up well in the wind and blow over too quickly . This November however with the trip to India I left it late to source the daffodils and could only find bags of mixed varieties in the garden centres and leaving it this late also means quite a few of the bulbs had gone soft having been in bags since August and these of course had to be discarded … that said my experience has been that bulbs can be planted right up to the end of December and still flower reliably in March . I would have preferred named varieties of daffs however had to settle for the mixed colours type which I am not a fan of and in fact this will be the first time I have planted white and yellow daffodils together and altogether planted 300 in an bed in the Lower Garden , in drifts with nine to each planting hole . 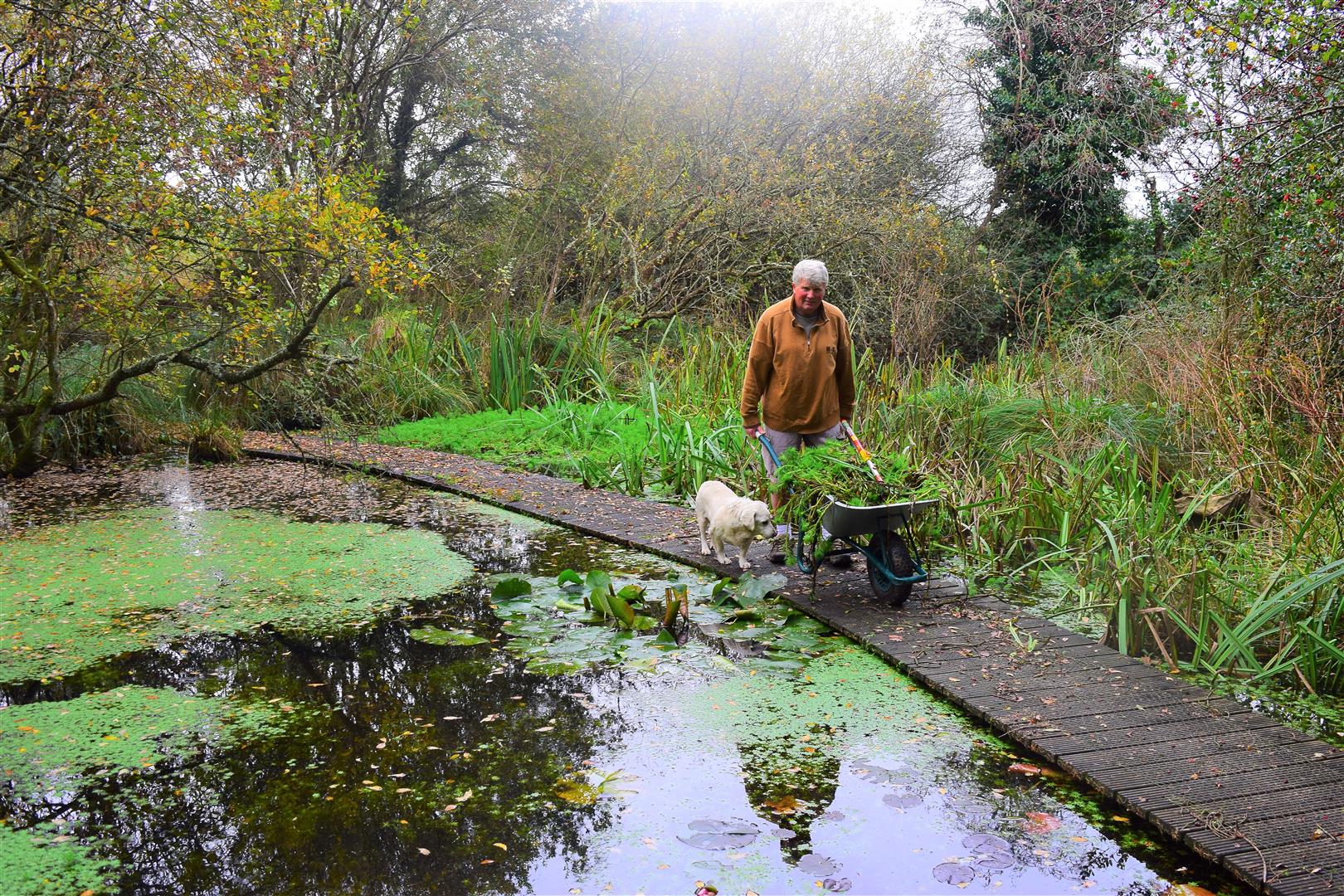 The regular cleaning of Parrot Feather from the Lower Pond , November 8th 2017

The usual cleaning job to be done in the Lower Swamp area on the water plant parrot feather which like most people I introduced to the water garden as it looked so pretty and non threatening in the garden centre but which like most gardeners with natural ponds I have come to regret ever laying eyes on it . Very VERY invasive and impossible to eradicate completely once in natural water where it romps away to the degree that if not checked you won’t even see the water anymore as parrot feather covers the surface completely . I clean out the area every three months but you never get it all and from even one small piece six inches long it will quickly grow back as bad as ever … a total curse . I had friends from Croatia visiting last month and Sanja fell in love with it and wanted to know it’s name and maybe try and bring a piece home which is exactly how the devil works Sanja !! 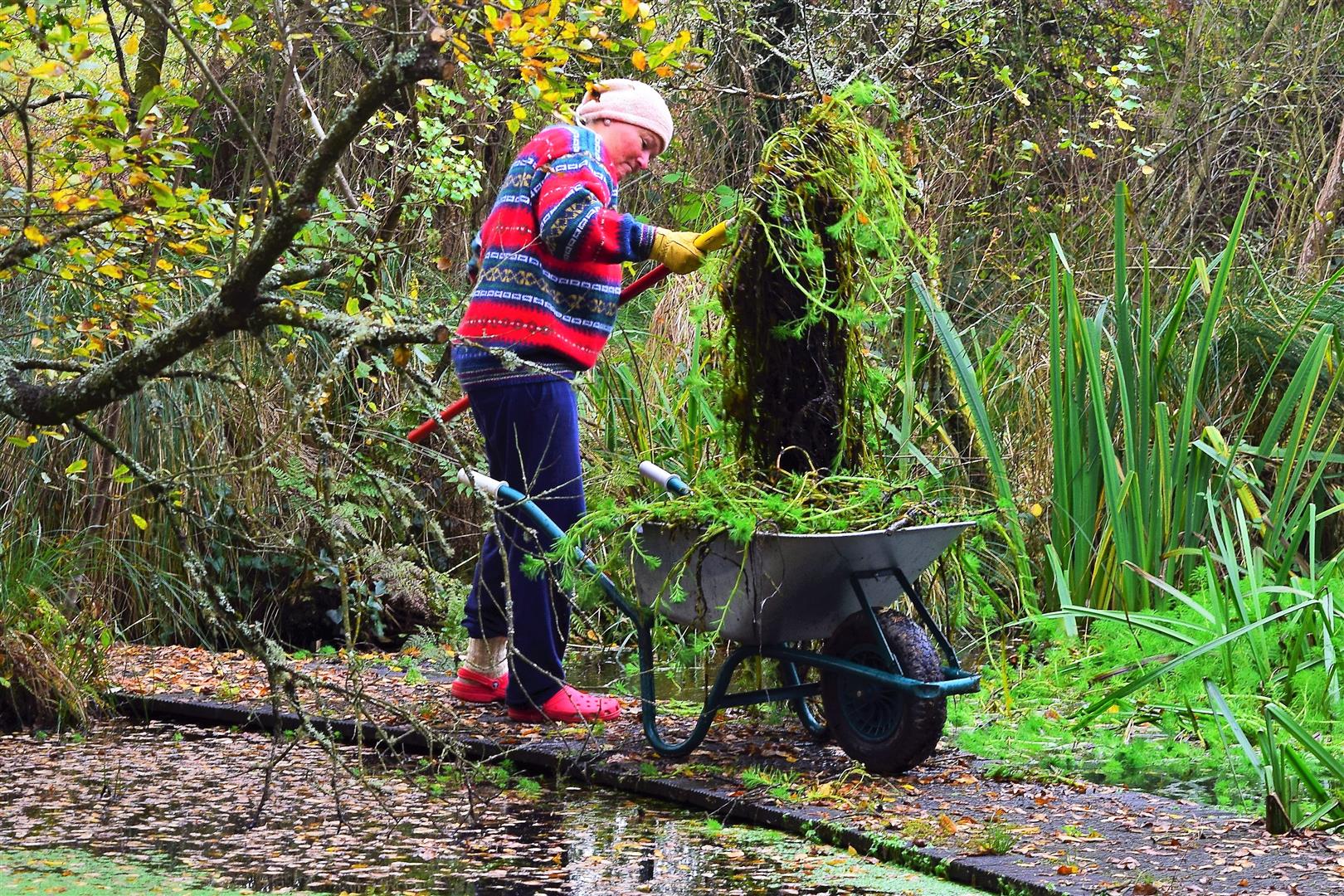 Snezana has a go at the Parrot Feather in the Lower Pond , November 2017

One Response to My Gardening Week November 30th 2017 …. The Petrovska Garden Chain Saw Massacre and what does that have to do with India ?!