February is the month of the snowdrop especially early in the month when it is the first flower in the garden . A tough little plant , its spears will push up even through frozen ground to flower , galanthus is the latin name and there are twenty species but hundreds of varieties but best sown “ in the green ” which is a clump dug up just after flowering and transplanted . The snowdrop does not like wet soil so we have only a few pockets where it grows well and these are close to the house in the front garden and although I like the plant I am not as enthusiastic as people who actually join galanthophile socities and go and visit large estates each February just to view massed snowdrops in their natural setting … to each his own !

I regard the snowdrop as a “ shy ” flower , almost diffident unlike say the brash daffodil or tulip as the snowdrop will barely raise it’s head and is so small in the ground but it is lovely and it brings Spring that bit closer when you see it in bloom . 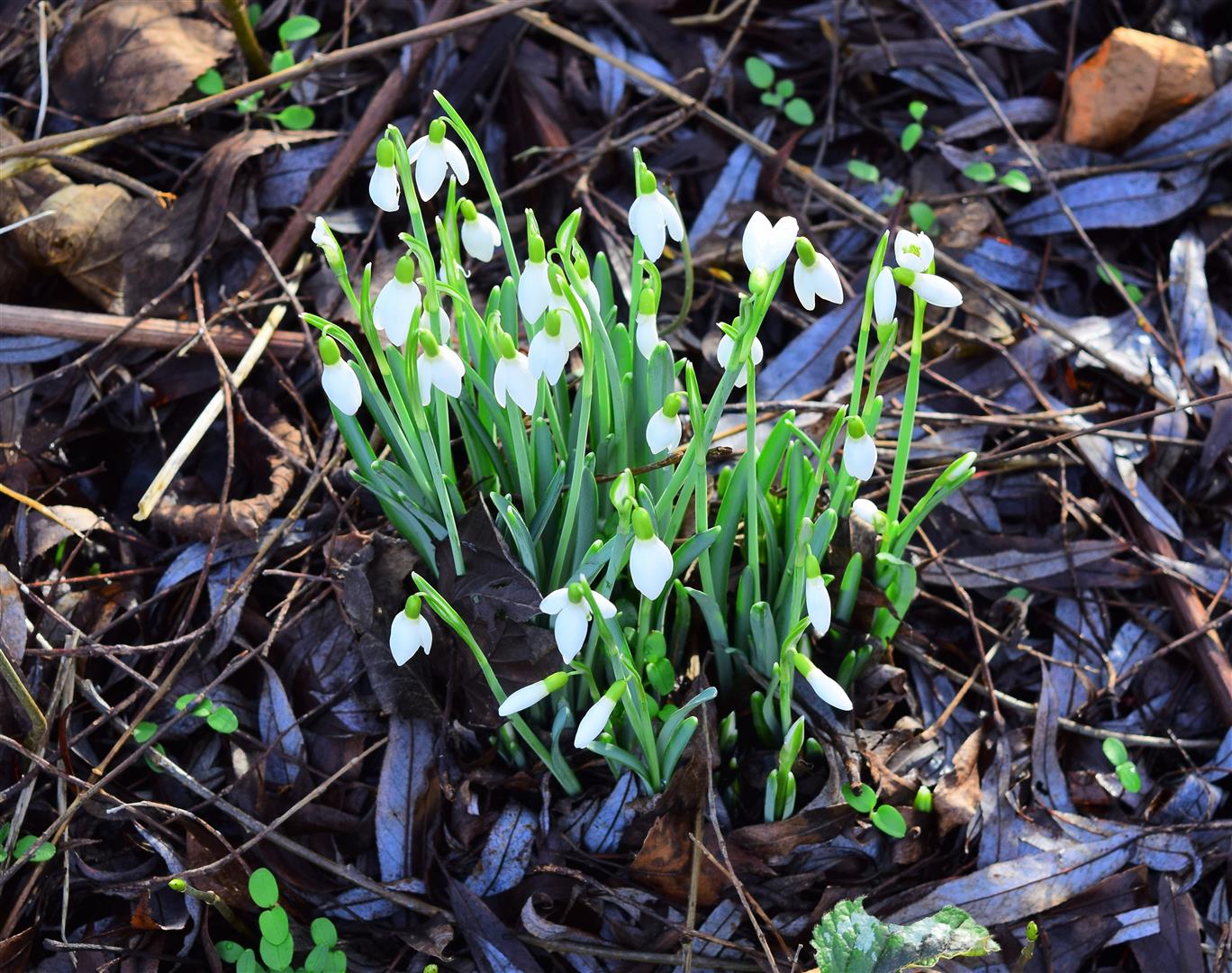 This bed in the front garden has good soil , a bit on the dry side , in dappled shade from the weeping willow and is where I plant cottage garden type spring flowers and generally is a catch all place where forget me nots , tulips , daffodils , snowdrops , primroses , crocus , anenomes , hellebores and wild garlic all compete from February to May and everything seems to thrive with little cosseting . I don’t have any planting scheme here and pop things in wherever there is space for a planting hole and there is an informality and surprise about the area that I really like and every week in spring brings a new surprise as for example today when I saw a lovely little wood anemone in bloom . 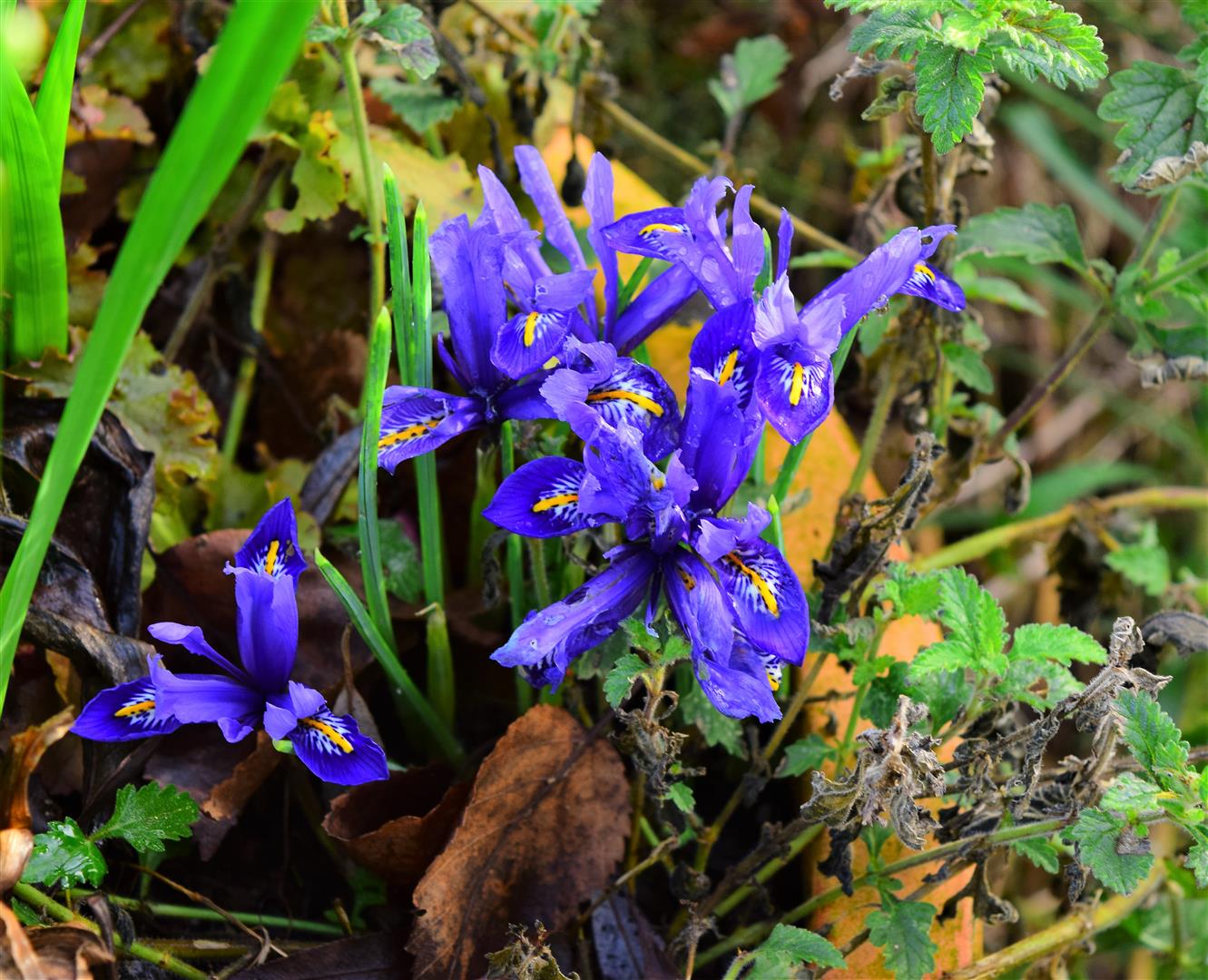 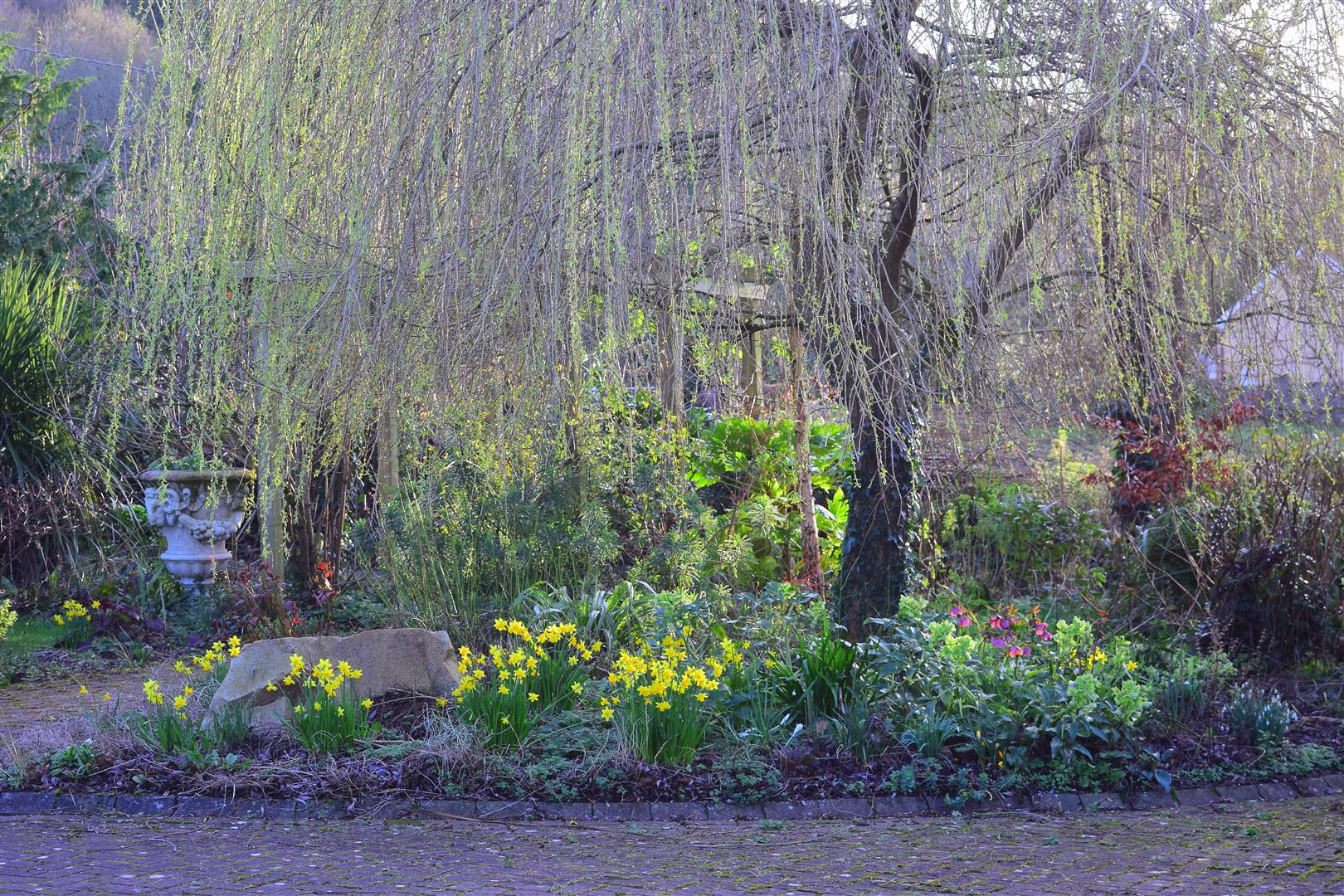 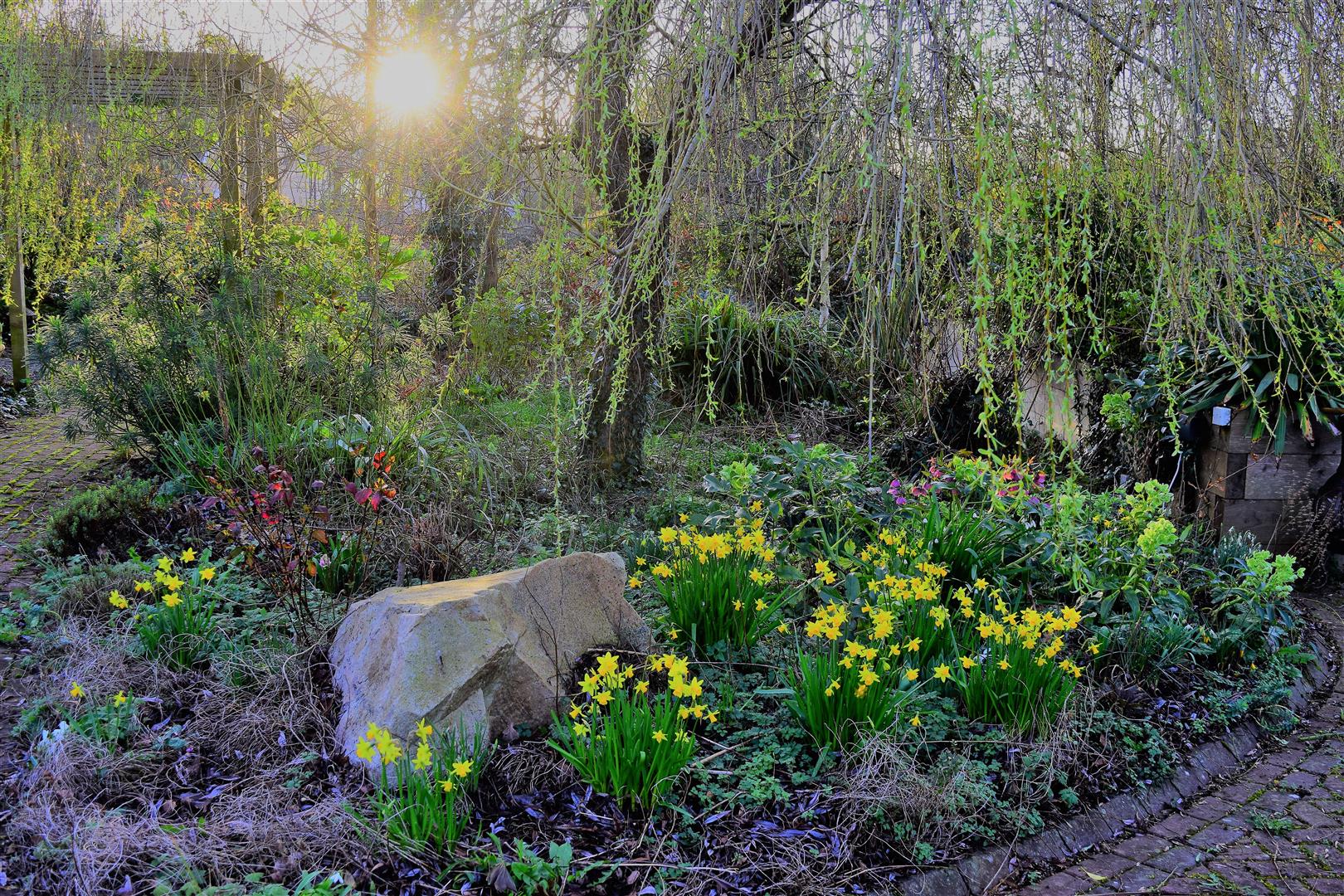 I am a great believer in recycling old containers and indeed anything with a bit of history throughout the garden and I bought this old tin bath in Wexford a few years ago where it was hanging outside an antique shop on Main Street , it is about seventy years old and God knows how many children got their weekly wash in it in front of the kitchen fire . I planted fifty tete a tete miniature daffodil bulbs right at the bottom where they flower all through February and March each year with no fuss or looking after apart from cutting back the foliage in early May and then I plant the entire surface with bedding annuals which flower right through to November . I have a second smaller old tin bath but this I have planted with a permanent collection of variegated grasses that give colour throughout the year . 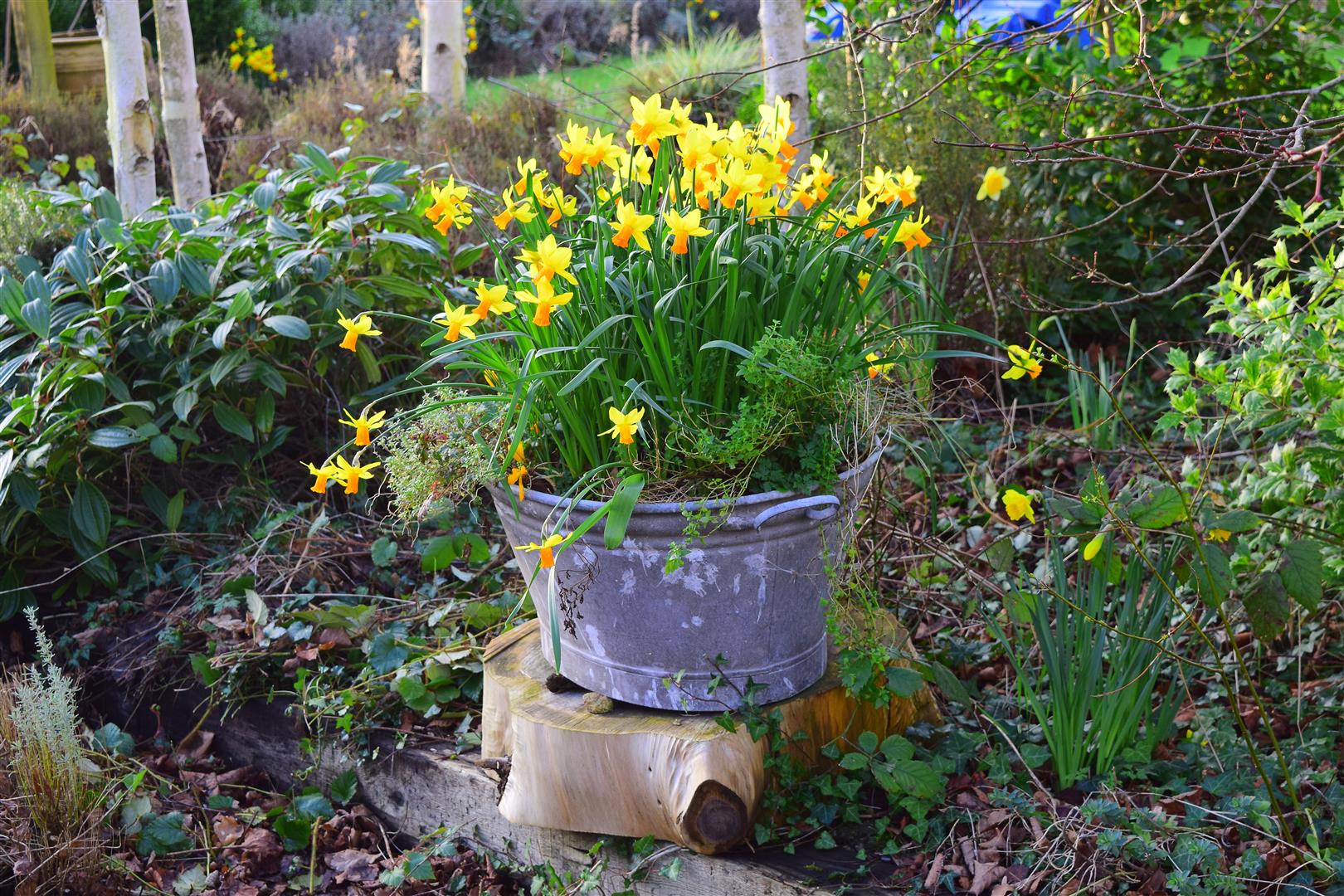 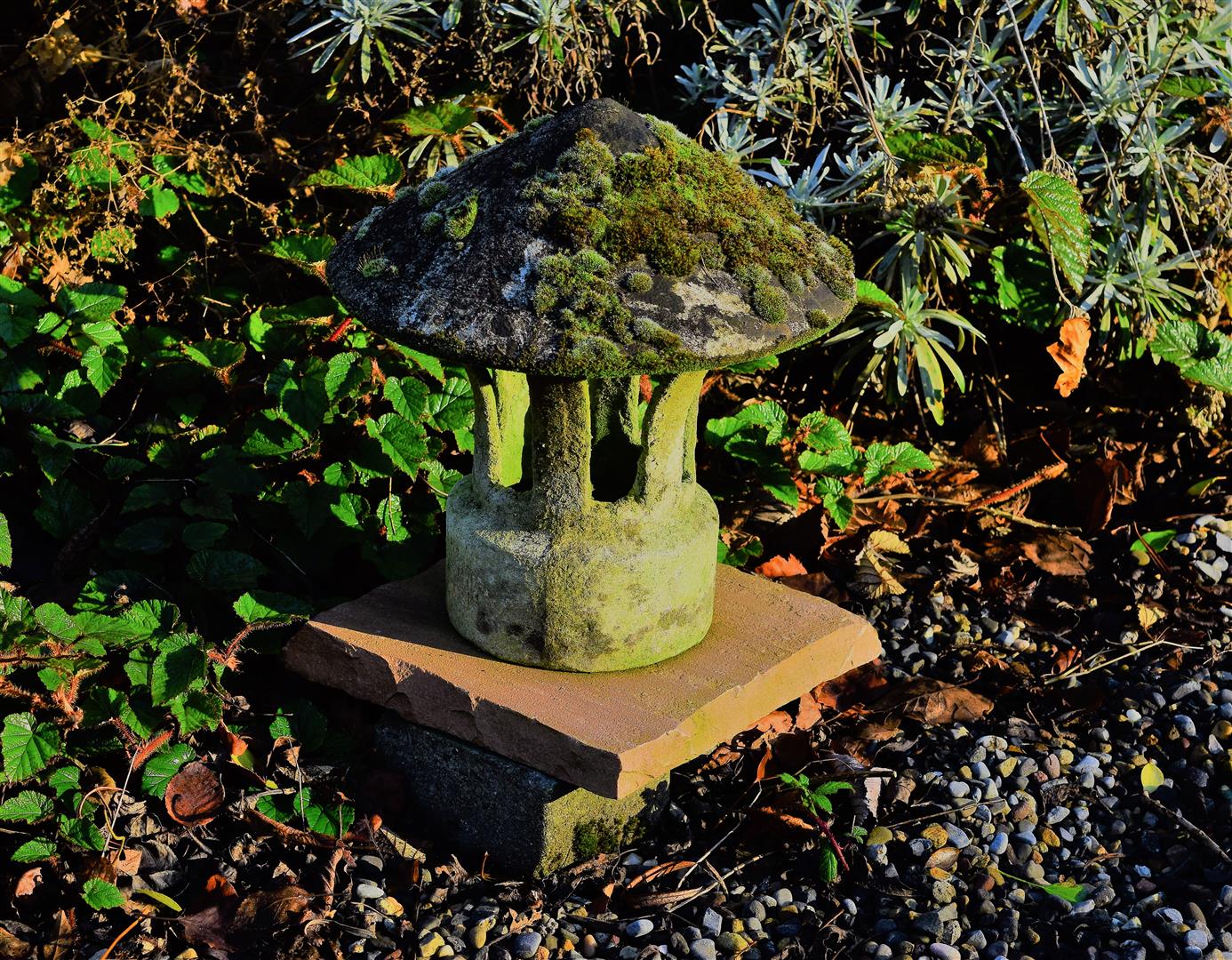 I bought this last year in the Kilkenny Architectural Salvage Yard

Sometimes we couldn’t fit an item in the car like this statue from Easter Island in the British Museum ! 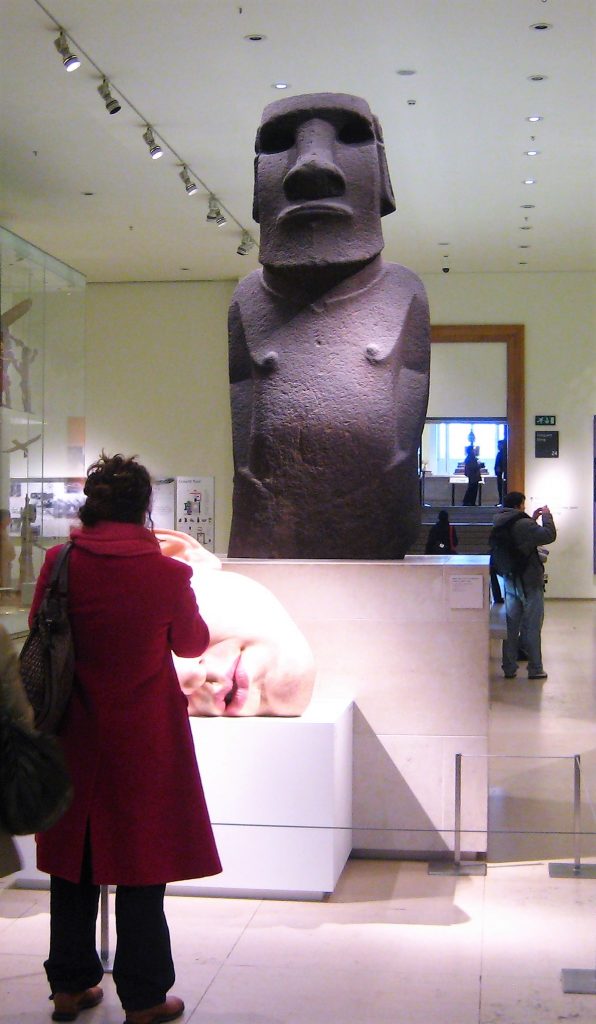 Snezana trying to figure out where this would look best in the garden , British Museum , February 2009

The surprise cult best selling book of last year  which won the 2016 British Book Awards for Non Fiction Book of the Year was “ Norwegian Wood ; Chopping Stacking Drying the Scandinavian Way ” by Lars Mytring advocates growing indigenous trees specifically for the home fires be it wood burning stoves or the open fire . We have always stacked our cut wood here and rarely if ever use it for household fires as we prefer to leave it in the nature for shelter for bugs , field mice and frogs etc. and we always use a chain saw for cutting . 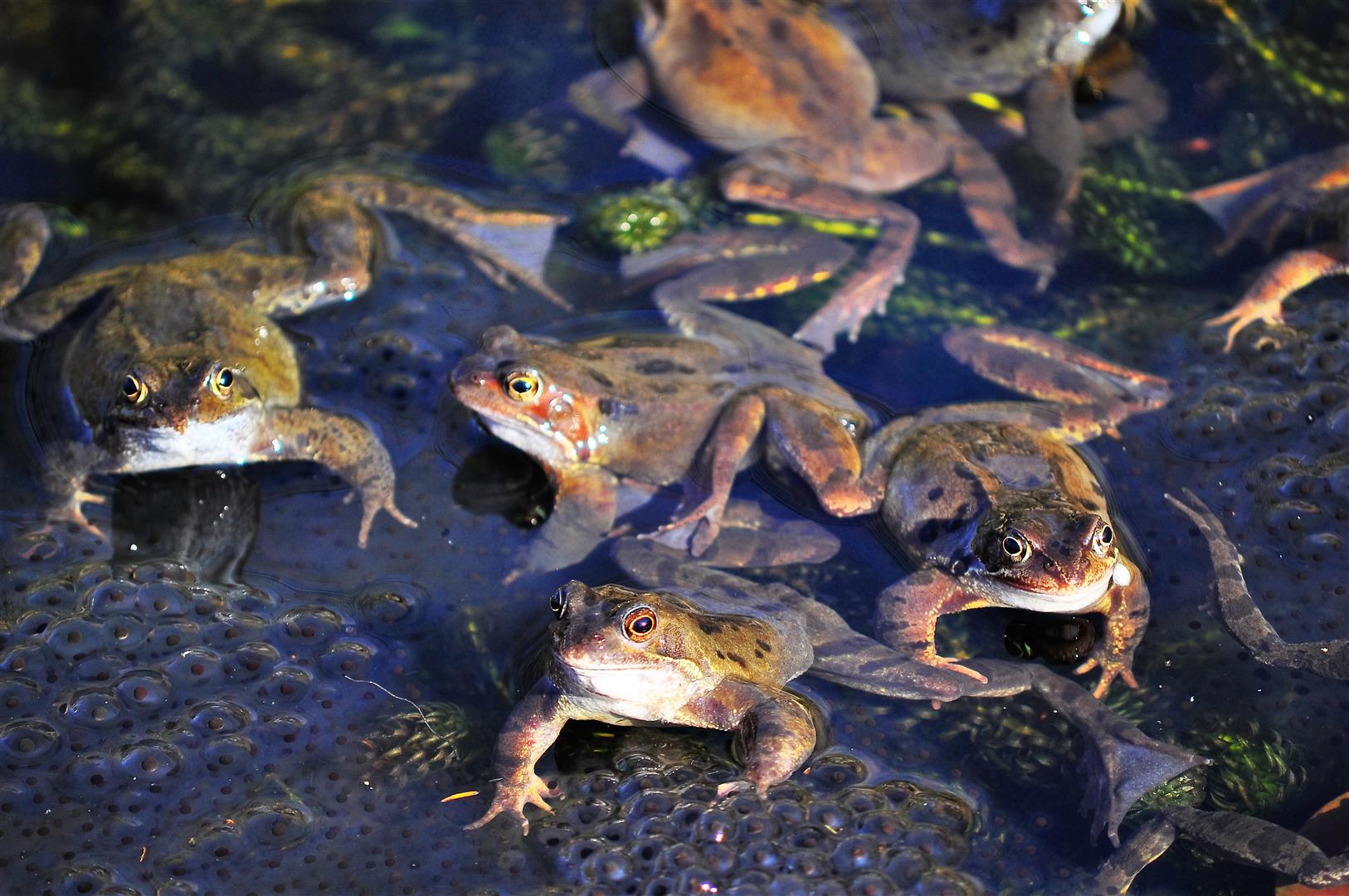 Last week I was in a neighbour’s garage where there was a beautiful long handled old fashioned woodsmans’s axe and it brought me back 30 years to when I used such an axe for all our household use but there was only an acre of garden in those days so we bought in the wood in trailer loads of what were called blocks and then I got in some useful exercise by splitting the blocks into usuable sizes and I remember how satisfying it was to get a good swing and cut in one fluid motion … my oldest son was about nine and he used to beg me to let him use the axe but of course it was far too heavy for him to swing but times have changed and Kev could now swing that axe in one hand while holding me up with the other hand ! Lars Mytring’s book has convinced me to buy a new long handled axe , a real Viking type axe which I will need to source in a specialist shop and then there will be no stopping me ! 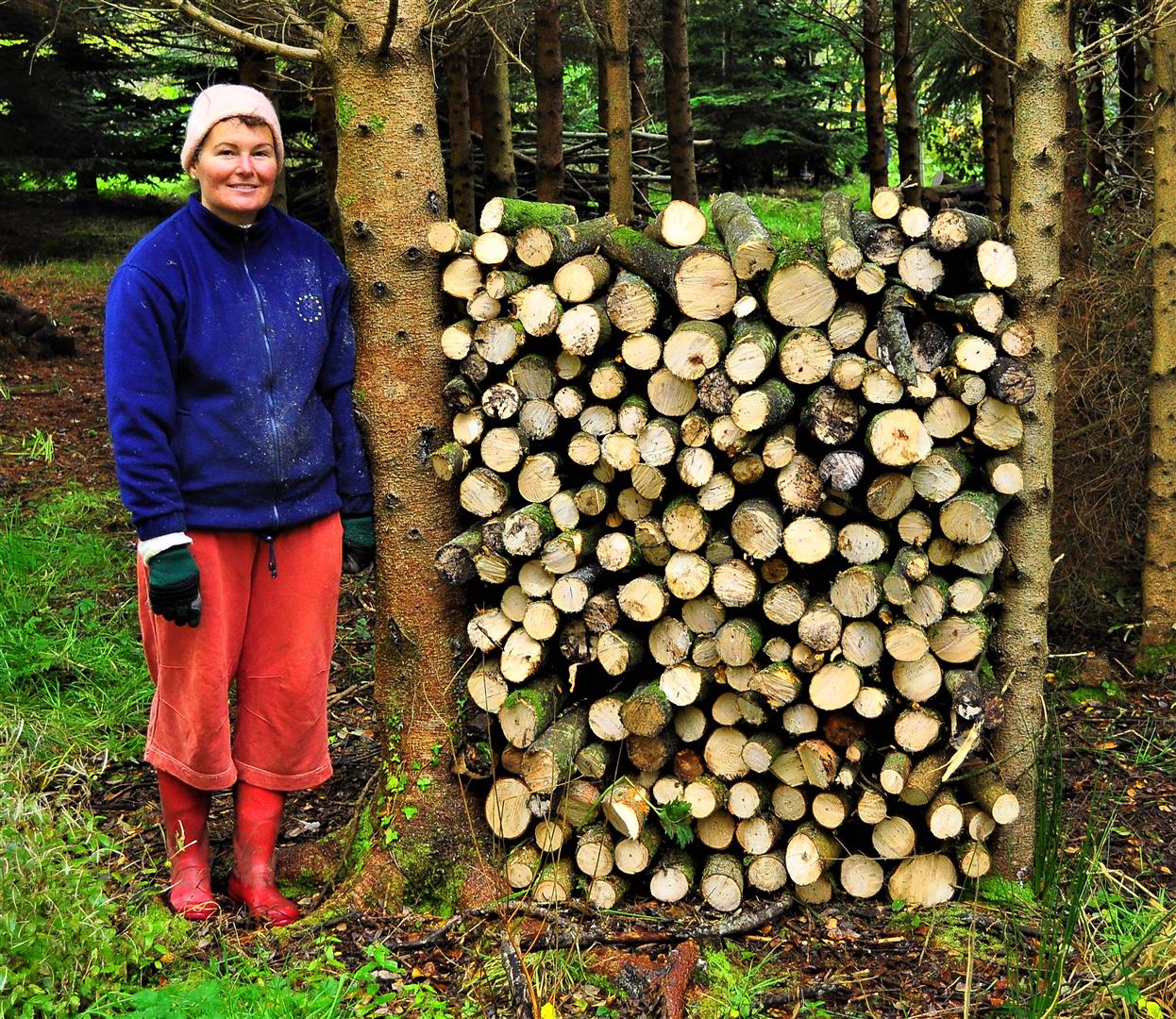 Gardeners all borrow and steal ideas from each other and so it should be as there are only so many original thoughts or ideas available and as the saying goes “ imitation is the sincerest form of flattery ” . I visited Carl Wildes’s Caher Garden , a magical garden in Co. Clare last June and liked his idea of severely cutting back golden willows to a single stem and letting a nice branchwork of new growth develop from a certain height as I found it to be very sculptural  so this winter I have been pollarding selected willows and each following spring will cut back the new growth … I am concentrating on the golden bark willows for the moment but will also extend it to the purple variety . I have used this method previously in the case of golden willows which are prone to a die back type virus where the only cure seems to be to cut hard below the infected branch . 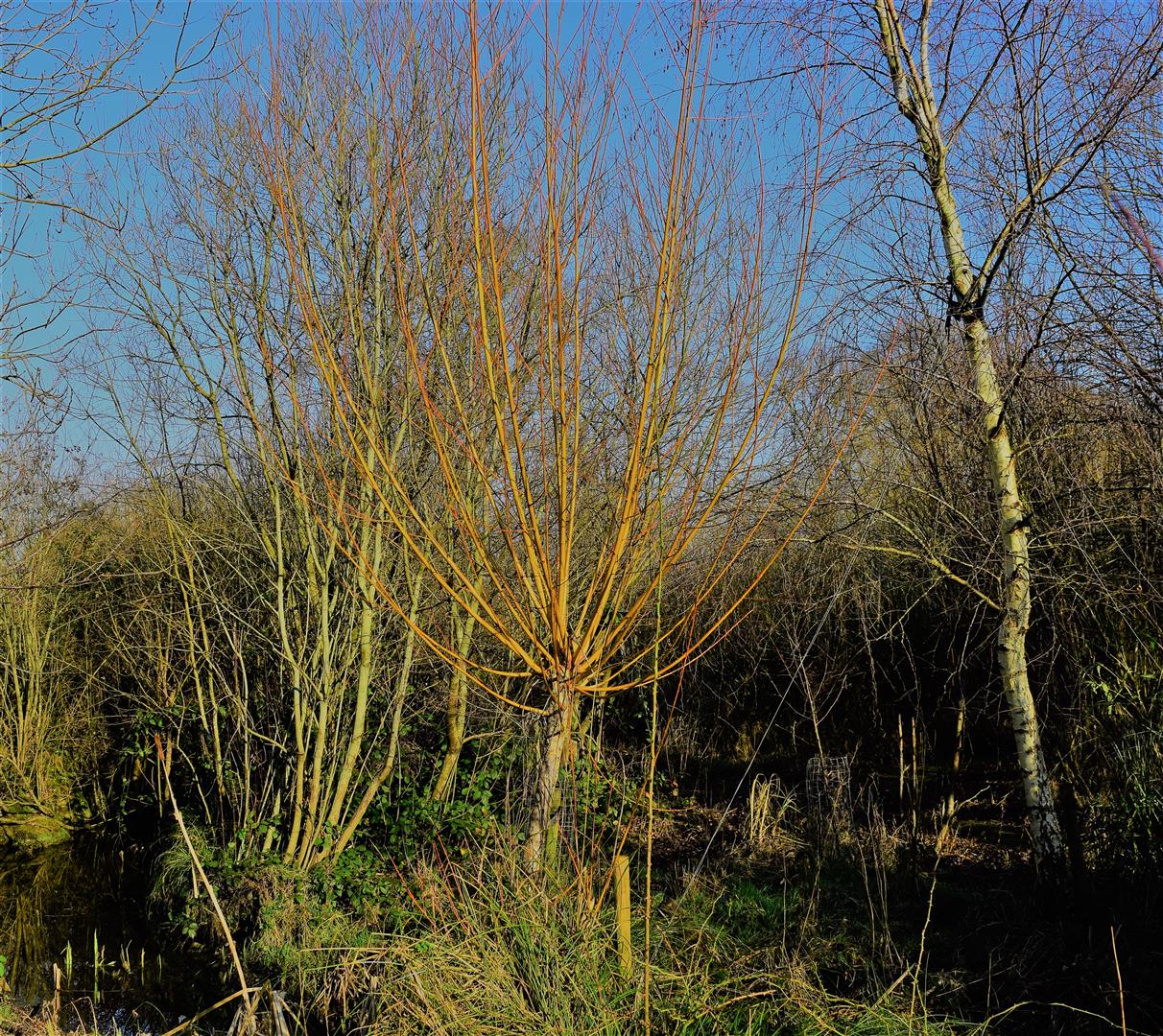 I used a severe pollarding in this case of a common willow in the front garden to bring the height down to a more manageable size for subsequent pruning where I don’t have to stand on a ladder to cut back to the crown as the older I get the more aware I am that falling off a ladder is the preserve of young gardeners whose bones can take it and I no longer seem to jump back up with the same speed ! 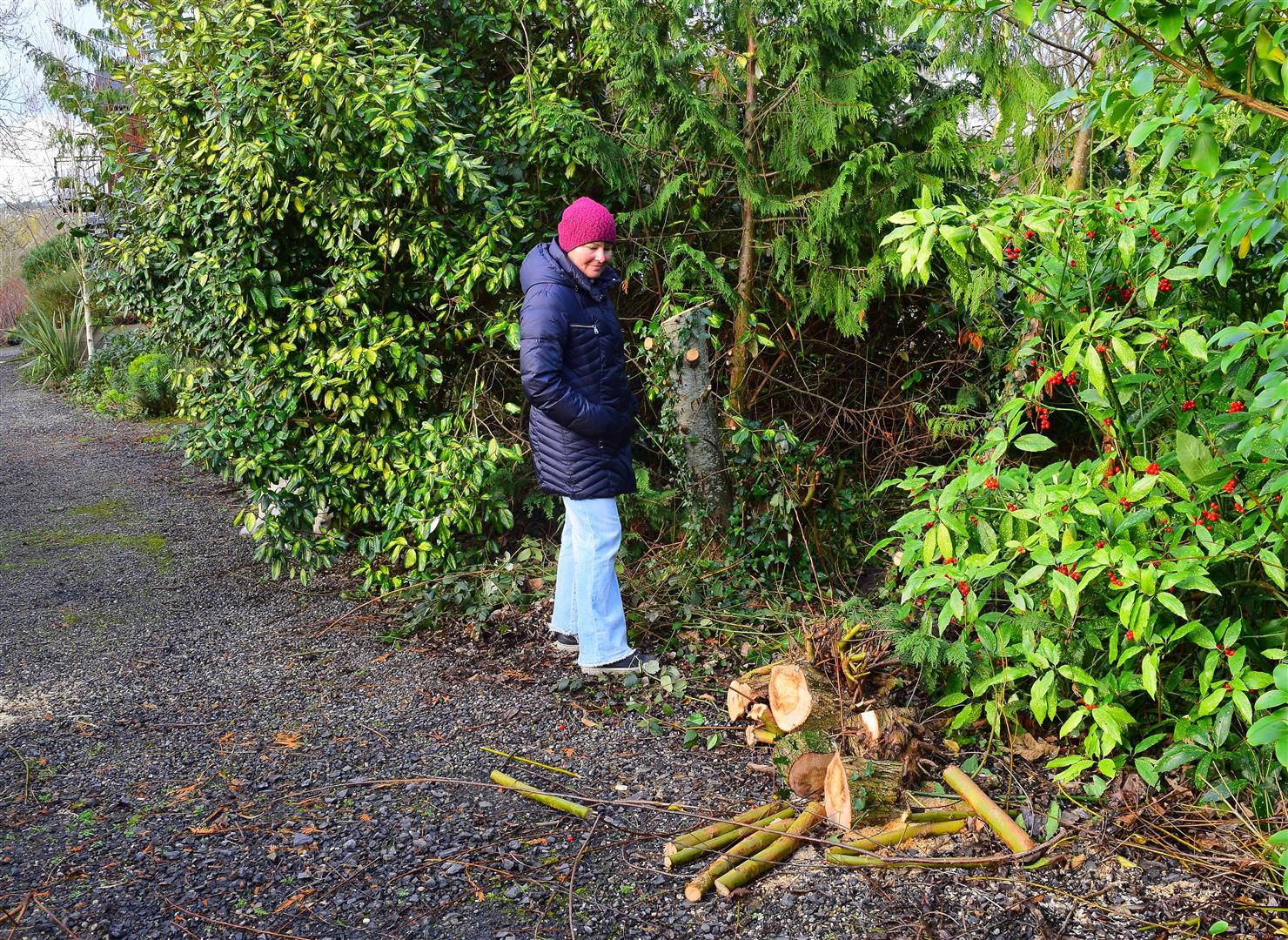 That cut that down to size … the aftermath of a Snezana style pruning , February 22nd 2017

Spring colour in the Water Garden 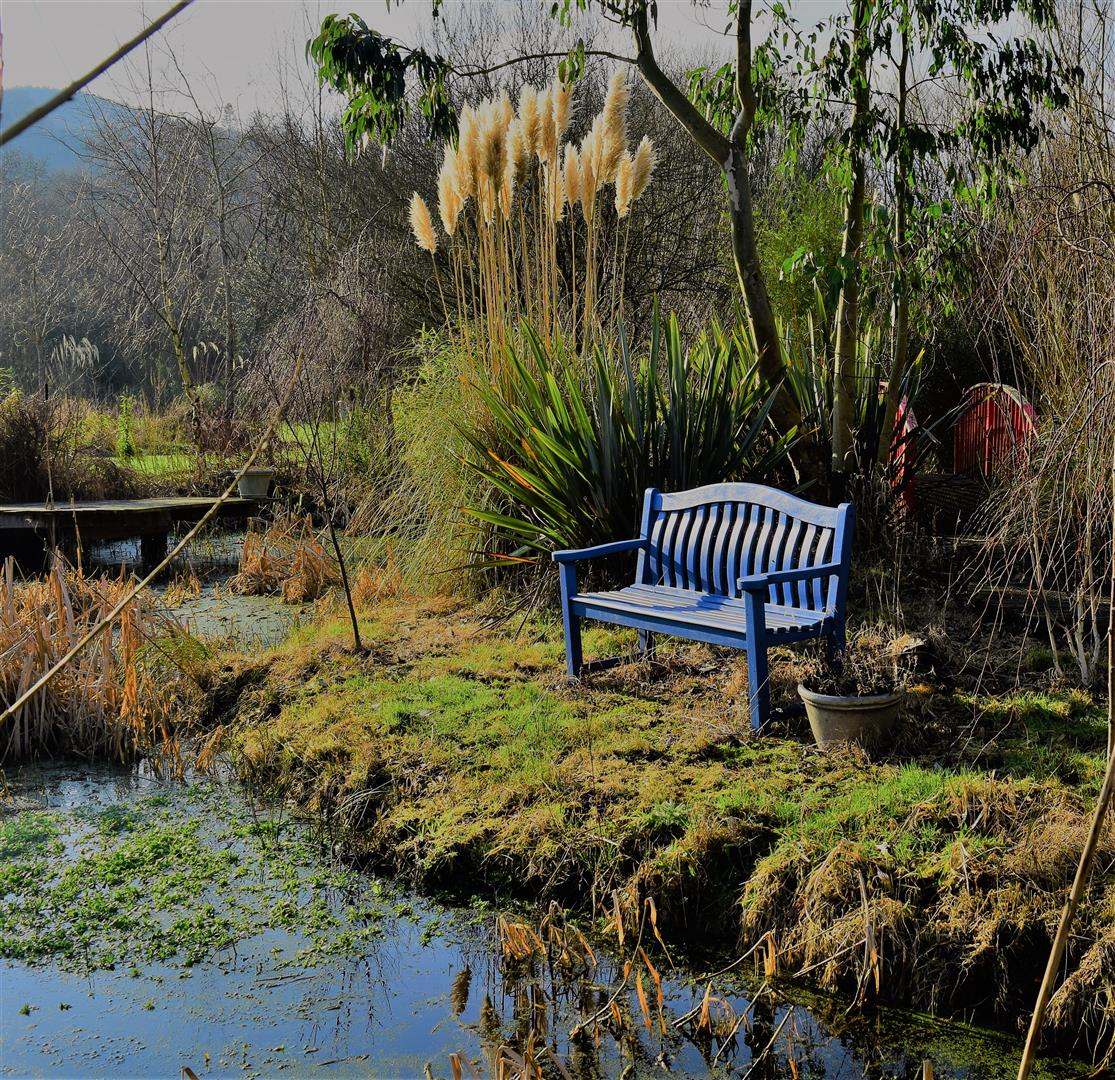