Because it is winter I am always conscious of how barren a garden can look and have treasured those trees and shrubs with great winter bark and similarly with shrubs with variegated colour leaves however I draw the line at golden leaf varieties which I always think look brassy and one shrub that is an old reliable here in winter is the eleagnus which is evergreen and needs little attention apart from cutting out the pure green leaves as variegated eleagnus will revert back to green if you are not vigilant with the secateurs and eventually take over the entire shrub .

I grow three varieties of eleagnus here , pungens maculate which is slow growing but steady , gilt edge which has the best colour but also slow to bulk up , the more common eleagnus is ebbingei which is quicker to grow , has a paler leaf colour and it’s habit is to sprawl in a floppy but charming way . Eleagnus gilt edge is the best and over ten years grows into a handsome well structured shrub and is my personal favourite eleagnus . All eleagnus will tolerate shade and are not fussy on windy positions or most types of soil except very wet so a really trouble free shrub and apart from cutting out the green shoots , ebbengii need no pruning and after six or seven years will prove to be a terrific shrub in all locations in the garden where some structure is needed . These are first rate shrubs and unlike what I have done here which is to use them as background shrubs they really deserve to be standing alone as feature shrubs . 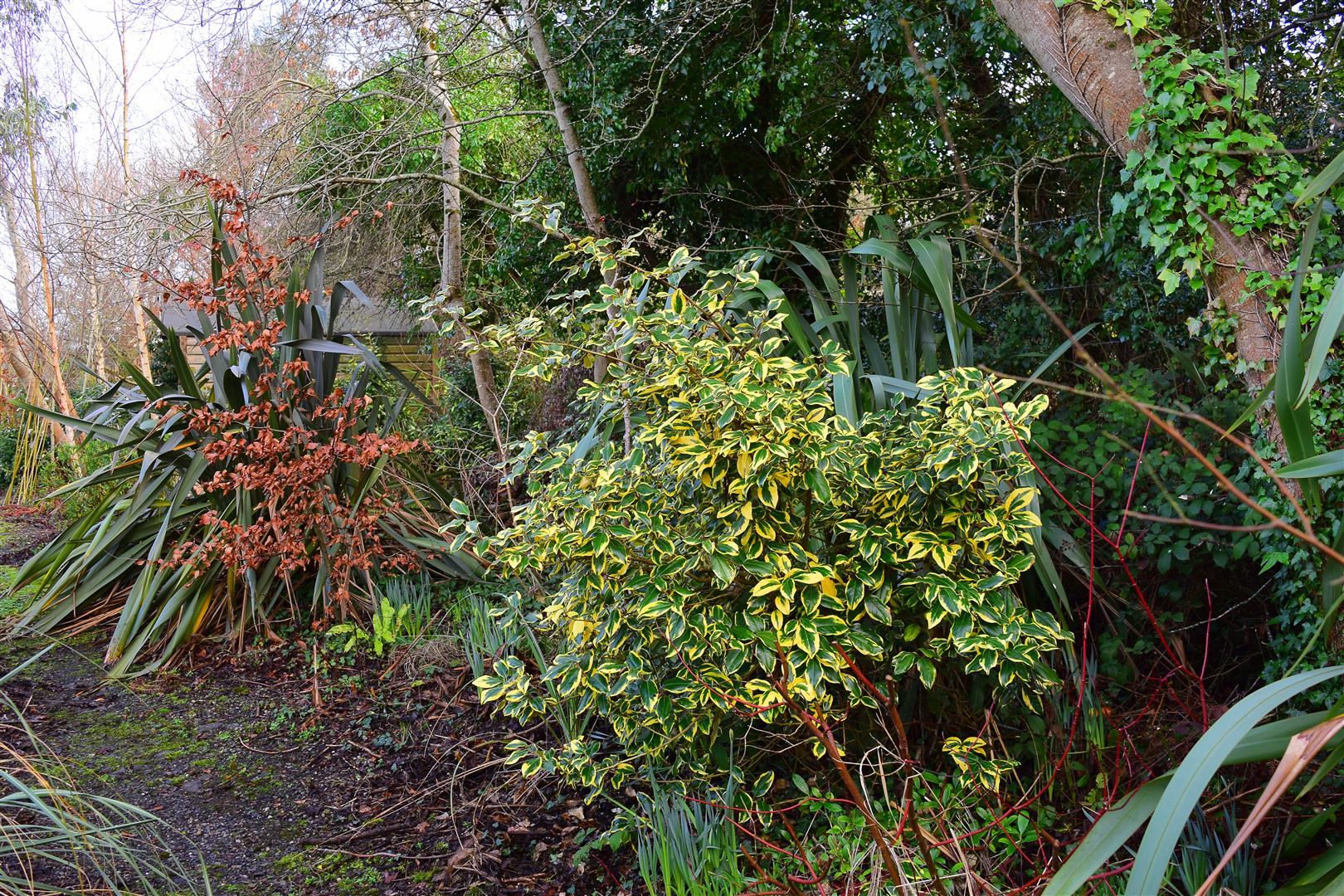 A flowering perrenial plant is a rare treat in the often gloomy days of January  and so it is with a small ground cover evergreen plant , the vinca , which seems to flower through most of the winter here in shaded areas of the woodland area . Vincas come in three types , major , minor and variegated and in shady dryish locations will happily romp away over walls , rockeries or in the front of flower beds , the major / minor refer to the size of leaf while variegated has a gold or white tinged leaf . I used to prefer the variegated vinca but found it too leggy and a bit brassy and now I far prefer the green leaf of the vinca major or minor and all three carry a pale blue flower but the variegated leaf does not flower as prolifically . Vincas are undemanding plants apart from the odd tidy up if they stray too much and they will take root wherever they touch the bare earth and you get lots of free plants as they put down a good root system if allowed to touch the ground which you can then dig up whole and transplant to a location of your choice … what’s not to like and to start you off in the garden you can buy trays of eight vincas in garden centres for 14 euros . 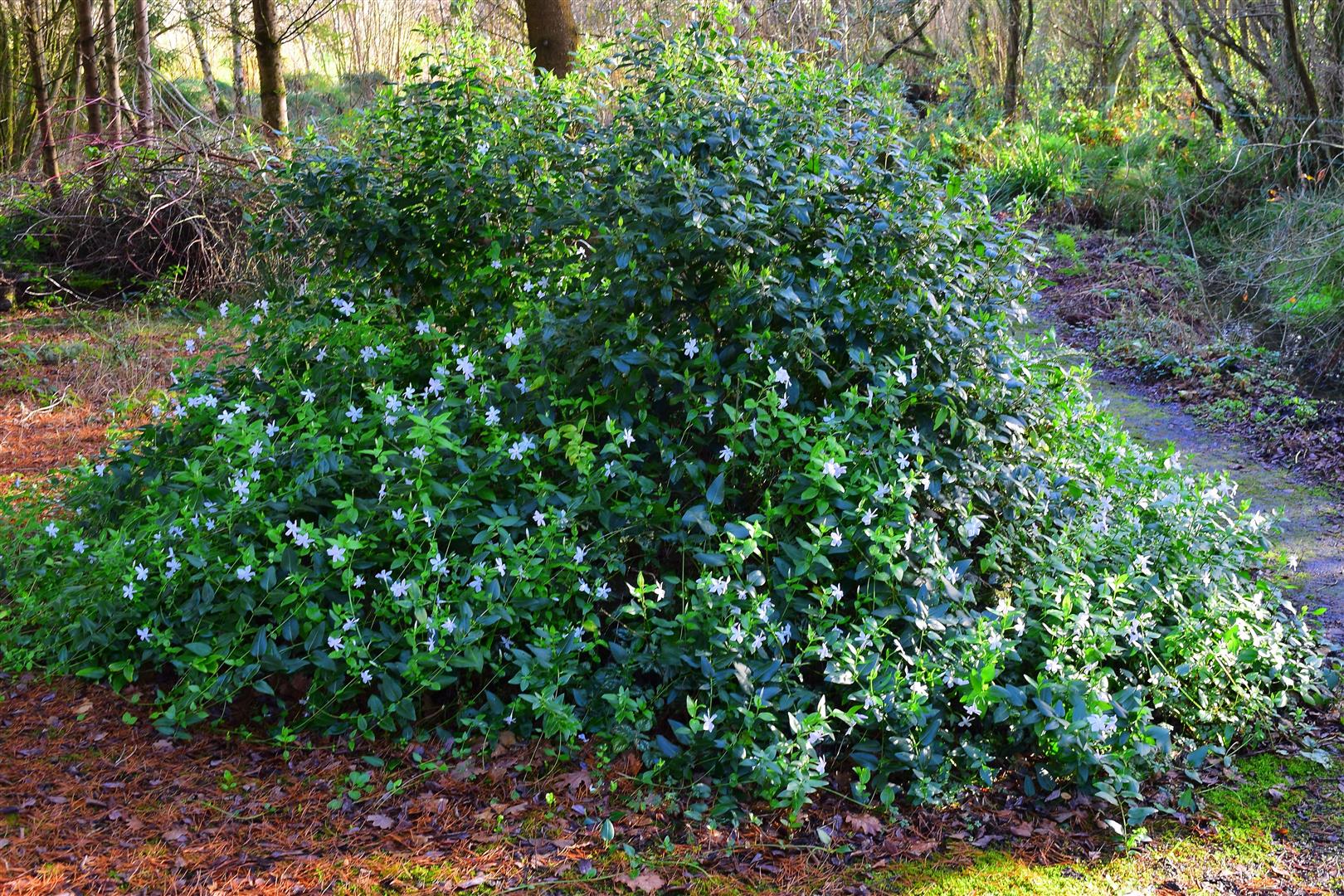 It is easier in my opinion to create a garden for Spring / Summer but  it takes a lot more planning and design for a winter garden to look good and hold the interest and here we rely on large scale planting of silver birch , dogwoods and golden willow to add structure and colour to the  garden in the dark days of December through to March . 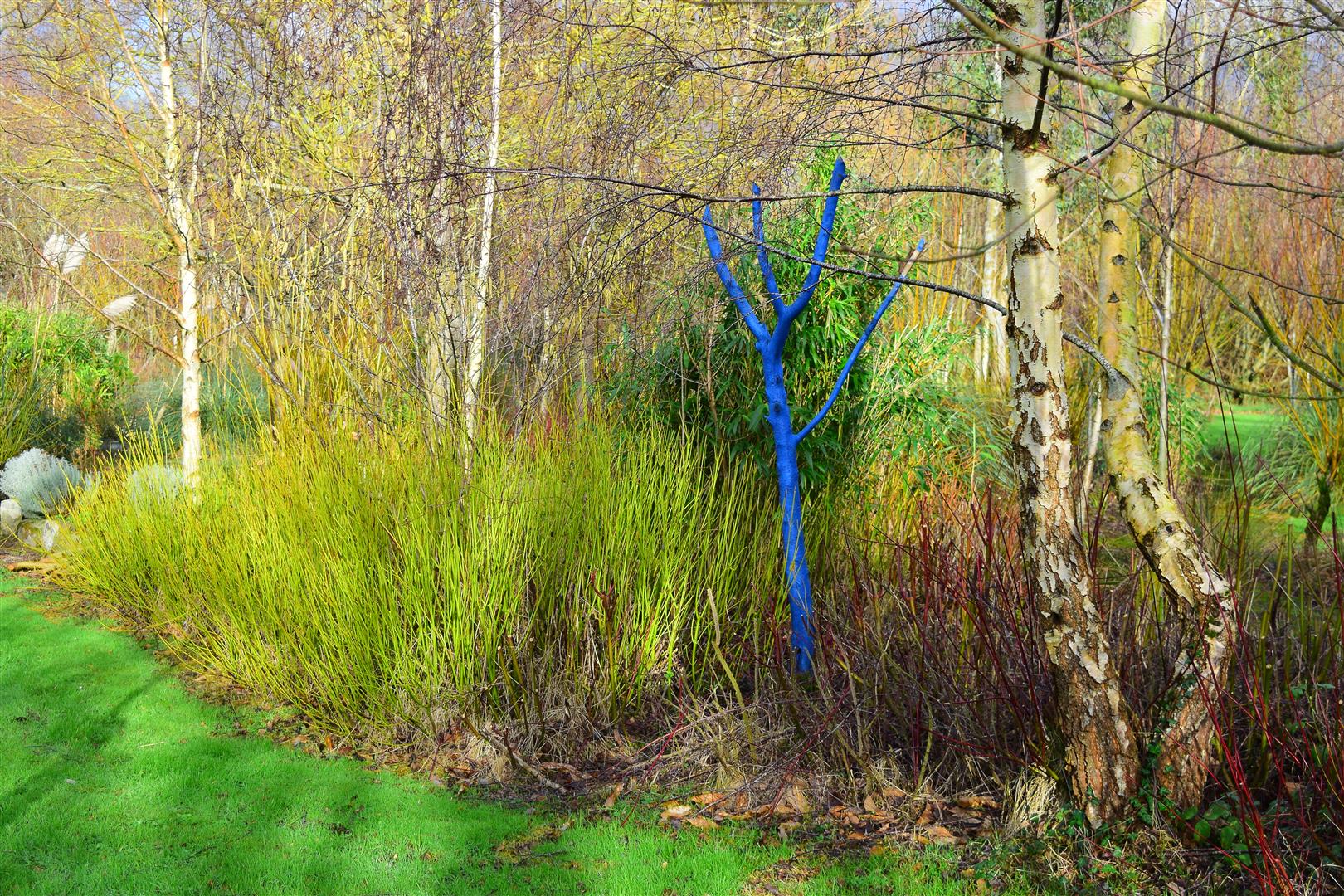 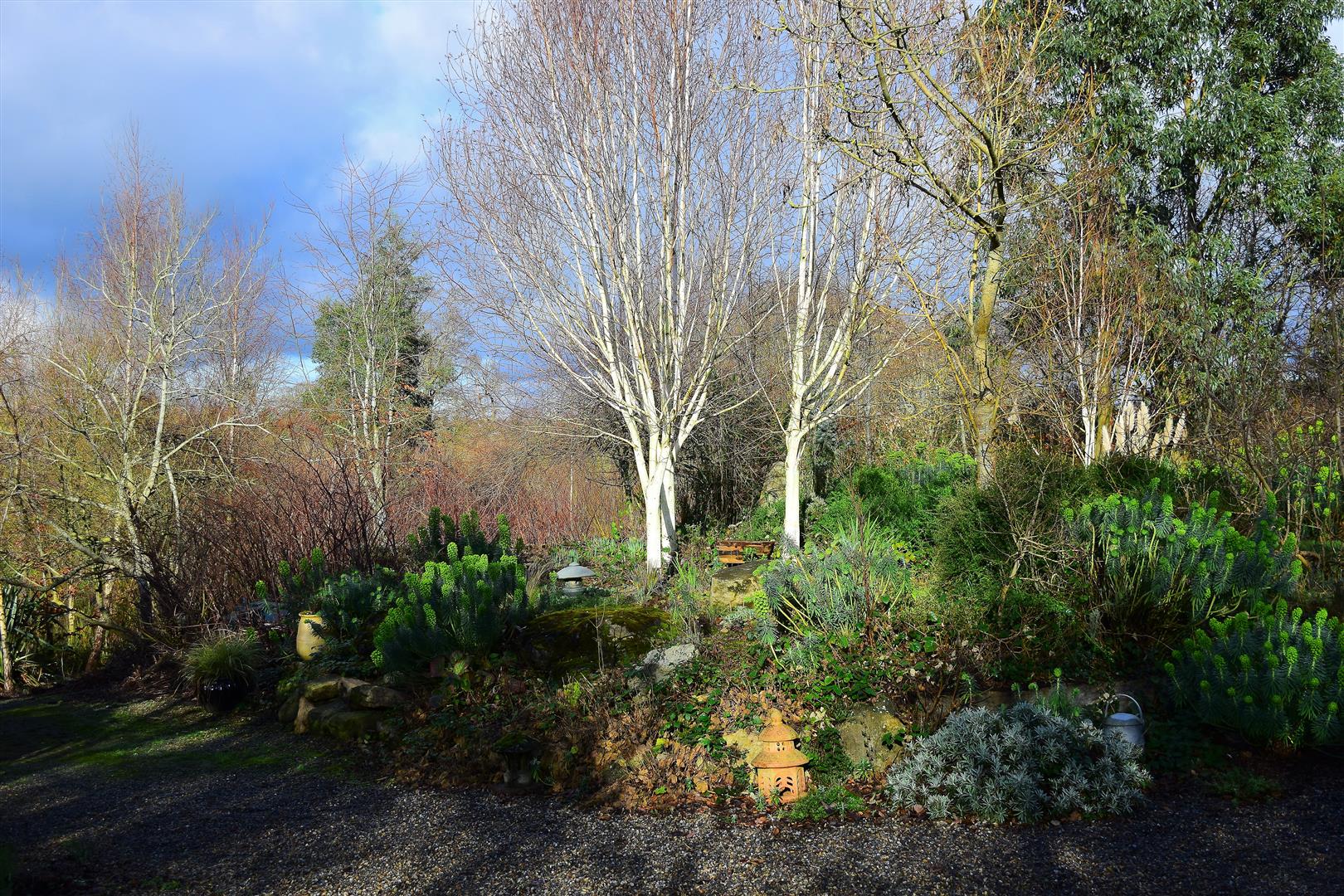 You can also provide winter colour with brightly painted furniture and the use of coloured ceramic pots . 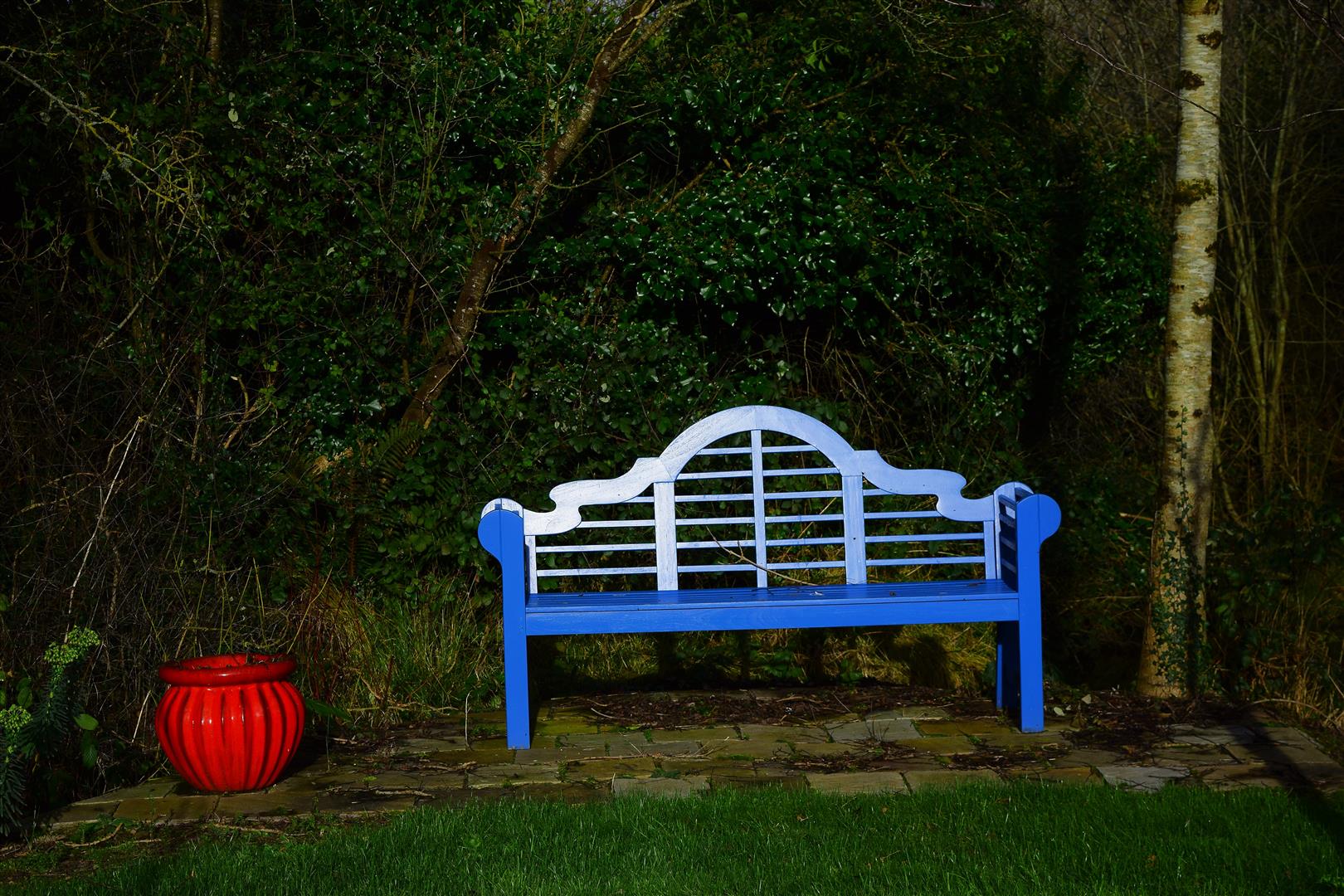 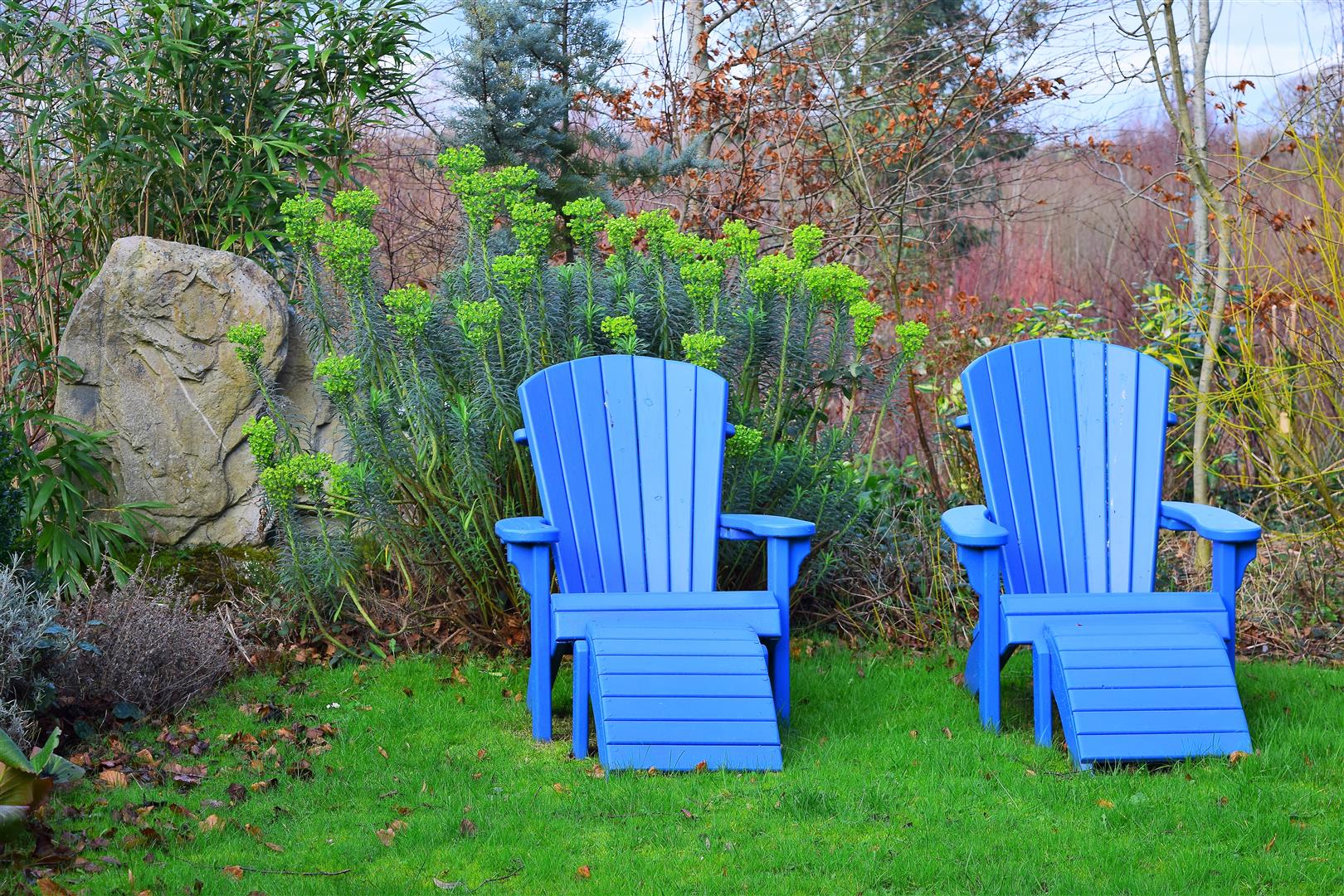 I speak less often here about the golden willow and what a great tree it is and we pollard ours here every Spring and for the last three years I have taken to cutting back to a single strong shoot establishing a head at about five feet high , removing all the side shoots and then cropping back hard to the head each year in early March , this produces a strong structure and the new shoots reach four feet every growing season and then show off the coloured bark in the winter while the new shoots are young , snappy with better colour . The downside of golden willow is that if not cut back strongly every two or three years they get very leggy , lose their vibrant colour and an added bonus in cutting back regularly is that you get a lot of useable cuttings which generally in normal soil will give a strike rate of over 60 per cent . 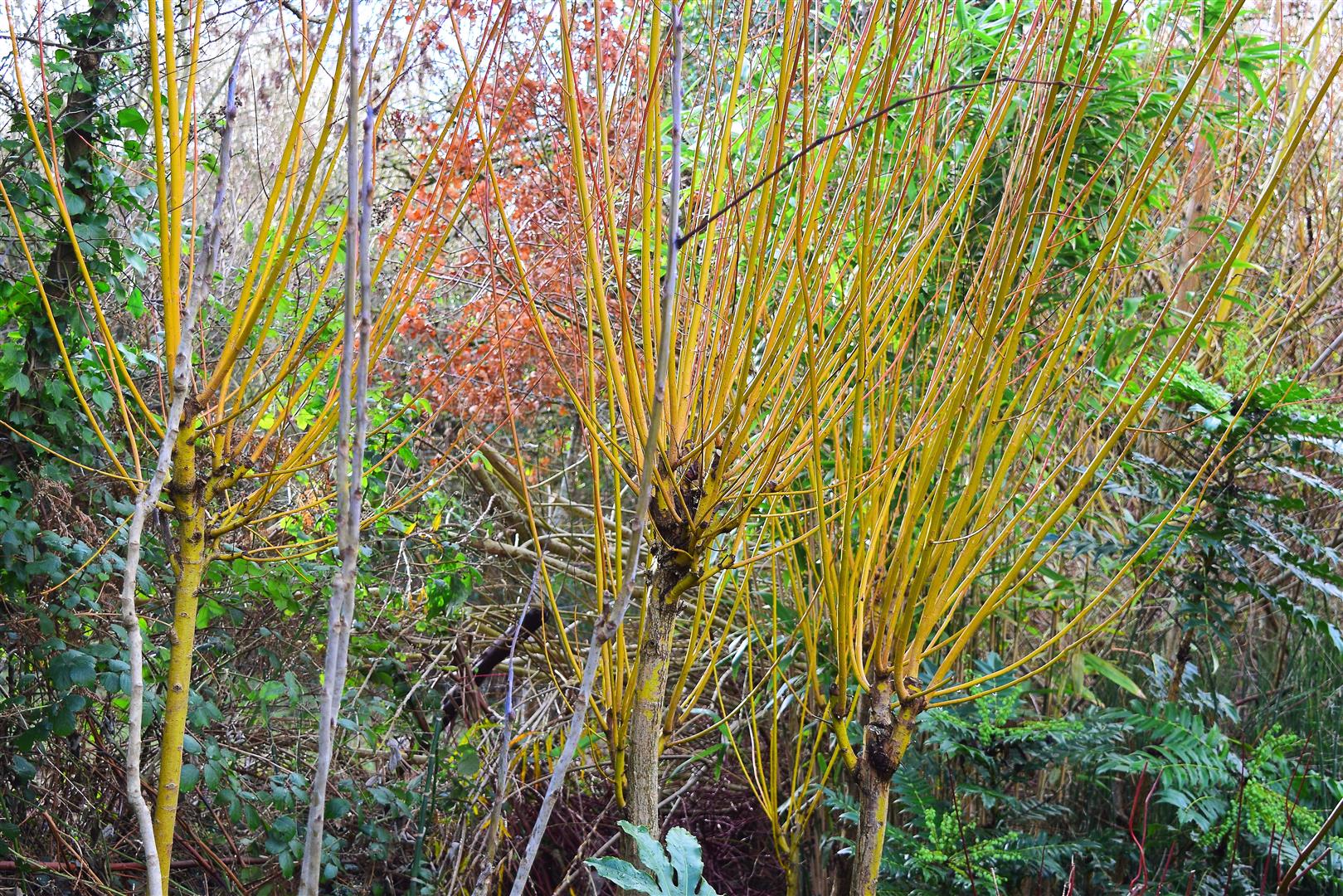 Golden willow which I cut back to the base each March , Lower Garden January 10th 2019

Last September courtesy of our neighbours , Sebastian and Michelle , we got Mimi  whom they rescued as an abandoned kitten and who after two days with me climbed into the engine of the car and hopped out in the car park at Dublin Airport , a hundred miles away where I was collecting Snezana off the plane from Copenhagen … none the worse for wear Mimi has become bigger and bolder ever since ! 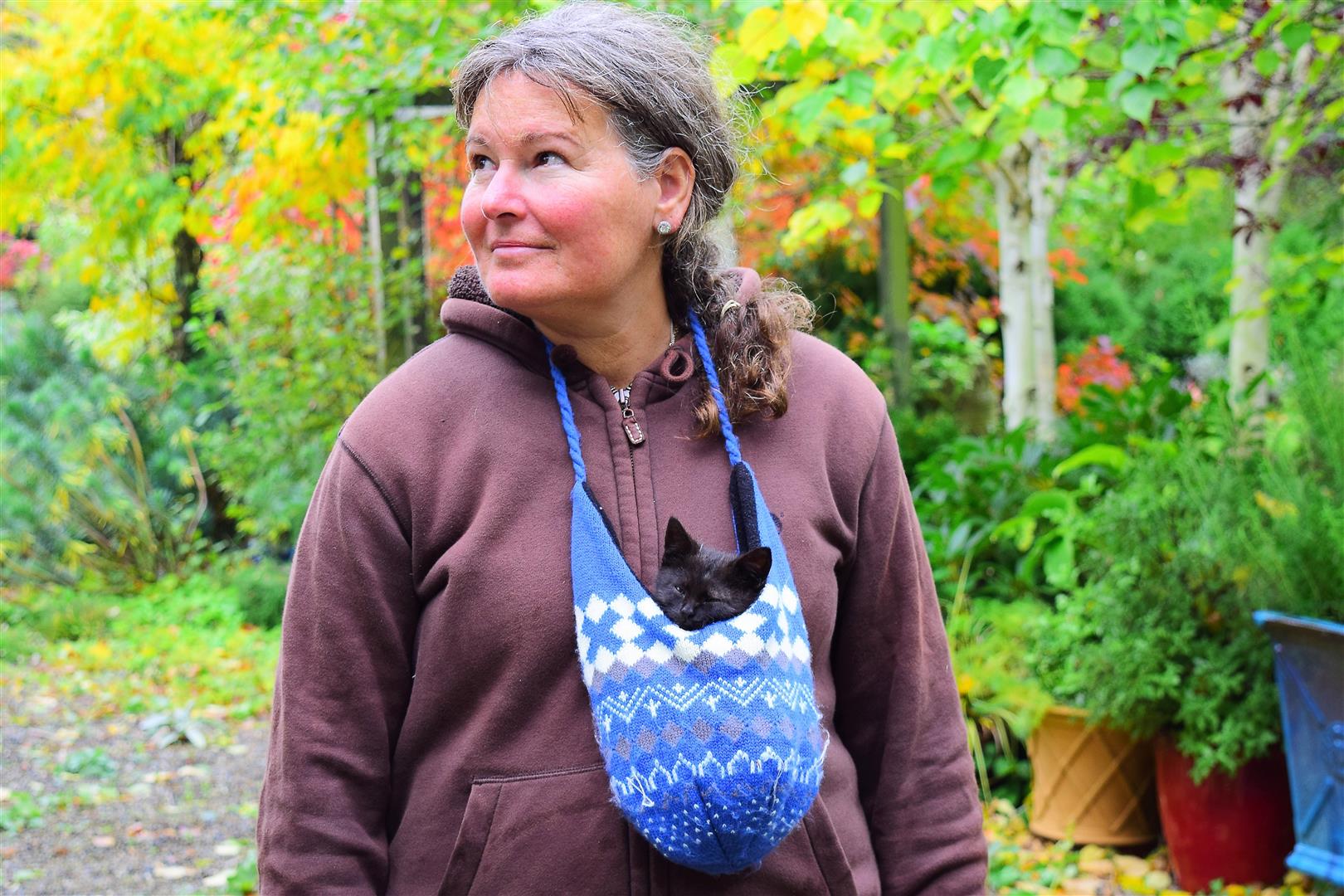 Snezana introducing our new kitten to the garden , November 2018

Japanese knotweed is a bad word in gardening circles both in Ireland and the UK and people panic when they see it for the first time in their gardens and yes it is sometimes referred to as the Godzilla weed and we have it here in one area when it came in with a lorry load of top soil ten years ago but from where it doesen’t spread as it doesen’t like wet soil . It originates in Japan where it grows on volcanic soil around Mount Fuji and where there are 49 different insects that eat and control it whereas here it has no natural predator so it romps away although they are trialing a predator in the UK which they will release into the wild once they establish it will behave itself and not eat everything else !

But listen to this , knotweed has been used for over 2000 years in chinese and japanese medicine and is used today to treat heart disease as it thins the blood and clears blockages in the arteries , cancer , diabetes and Alzheimers and it is a prized mountain vegetable in China and Japan for it’s vitamins and minerals .

It is also one of the most medicinal plants on the planet containing more of the polyphenol resveratrol than any other plant … resveratrol ? … well the Harvard researcher , Dr. David Sinclair has called this substance “ the Holy Grail of anti – aging research after witnessing it’s effects on mice in his lab .

While personally I like the patch of knotweed we have here I would not recommend importing it into a garden that doesen’t have it as it is almost uncontrollable in dryish soil but if you have it just accept it for the beautiful architectural plant it is . 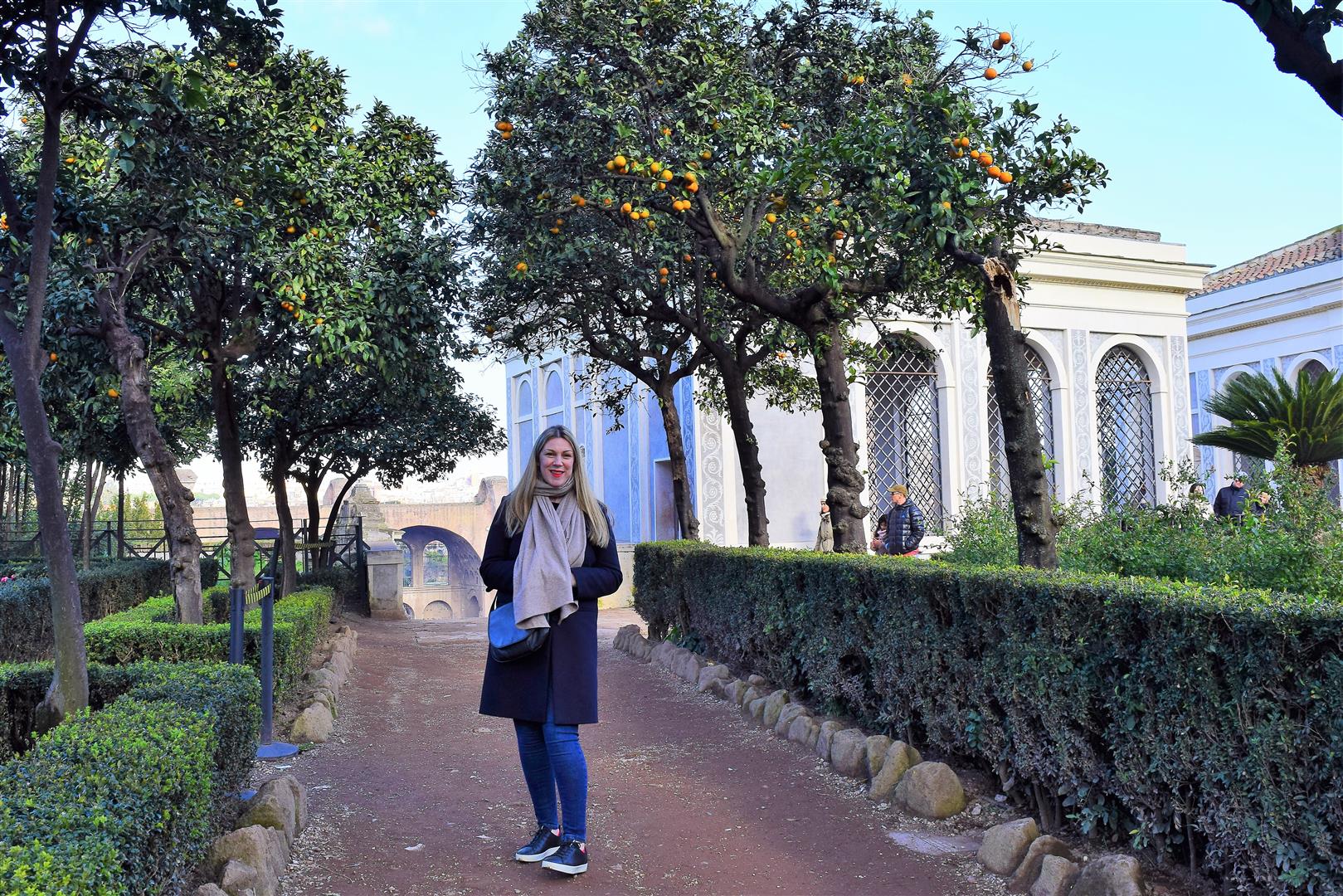 On the Palatine Hill , Rome , January 13th 2019 with ripe orange trees in the background

I was in Rome for a few days in early January to visit my daughter Claire and we used the opportunity to visit  some of the ancient 2000 year old monuements , I had left  a cold rainy January in Ireland the day before and found myself looking at oranges growing in the area and ready to be picked where the old Roman Emperors had their gardens two thousand years ago  .

My kids when small were all embarrassed by my enthusiasm for ancient ruins , bored also of course but I ploughed on regardless hoping eventually they would get hooked as I was on history … not to be … and I gave up finally one day in the Louvre Museum when I was standing with all four of them in front of a 5000 year old stone head from Luxor in Egypt and told them to copy me and run their fingers along the grooves of the carving and realise they were tracing lines cut by a sculptor so long ago across the millenia … the then 14 year old Claire said stop Dad there are people watching and getting nervous of you !

Knowing the low threshold of interest I kept my enthusiasm on a leash this time with Claire but couldn’t resist when standing in front of the Arch of Titus in the Forum pointing out that this was erected in 80 AD to commemorate the sacking of Jerusalem in 70 AD and that high inside the arch you could see a carving of the roman soldiers carrying off a jewish menorah looted from the Holy of Holies on Temple Mount and carried back to Rome as spoils of war and middle eastern politics has dominated European history ever since . 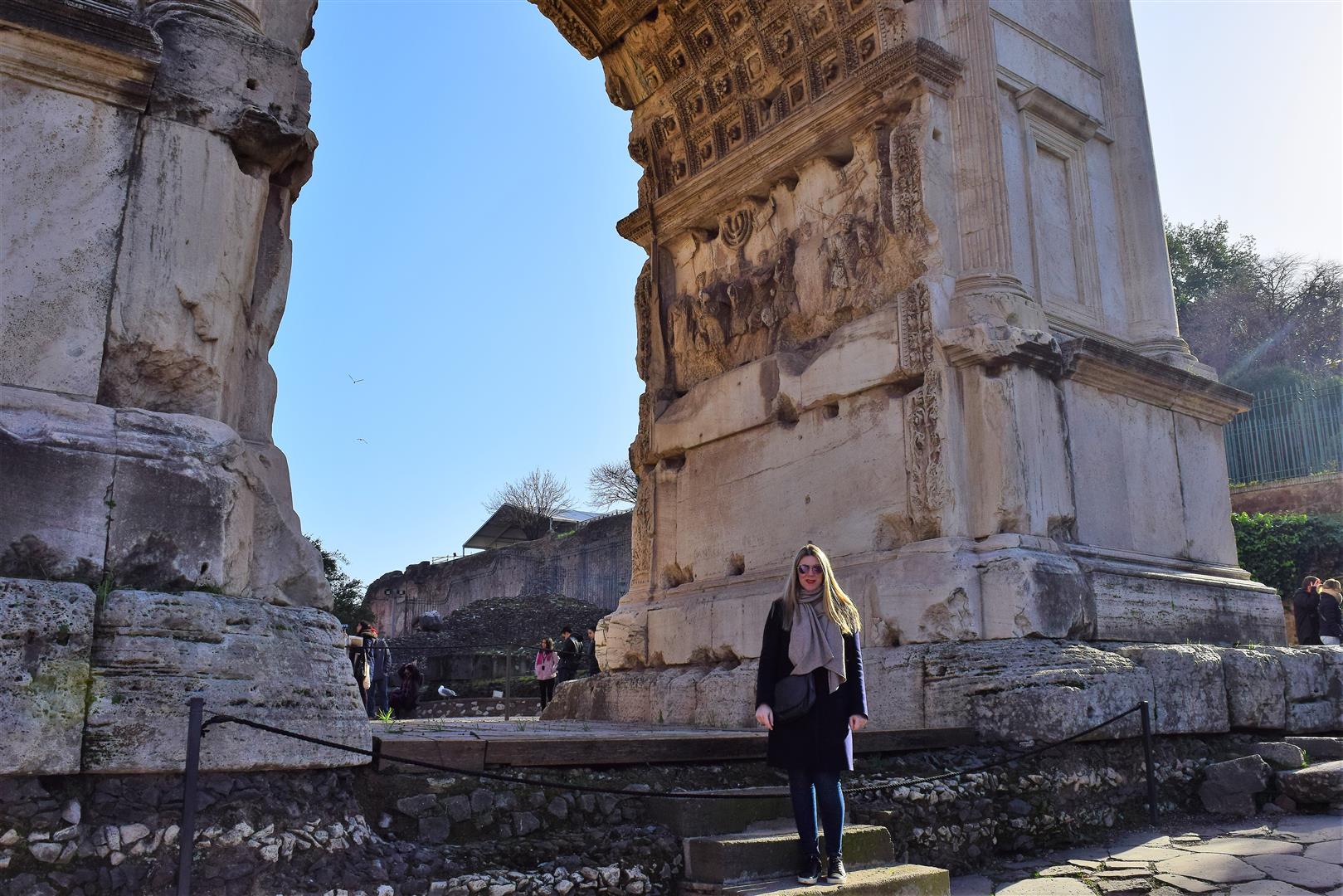 At that point I quit while ahead and we went for a pizza in Tesstacio !

There were of course slaves in Ancient Rome and also here in our garden as apart from a ten day break in Copenhagen at the start of January for Orthodox Christmas with her parents , Snezana has worked a minimum of three hours each day in the garden throughout the month cutting back the willow trees with her chain saw and the garden has never looked better for all the thinning we did last year when the chain saw was bought . I say “we” but the chain saw is used exclusively by her as I am petrified at going near it … are you a man or a mouse squeak up … and my role in the operation is mainly that of a hewer of wood and drawer of water i.e. a peasant as I collect and dispose of all the cuttings , the heavier logs going for the wood stove and the remainder stuffed into ditches and hedges to bulk them up against the deer and I have to say the chain saw was one of the best things we bought for the garden . 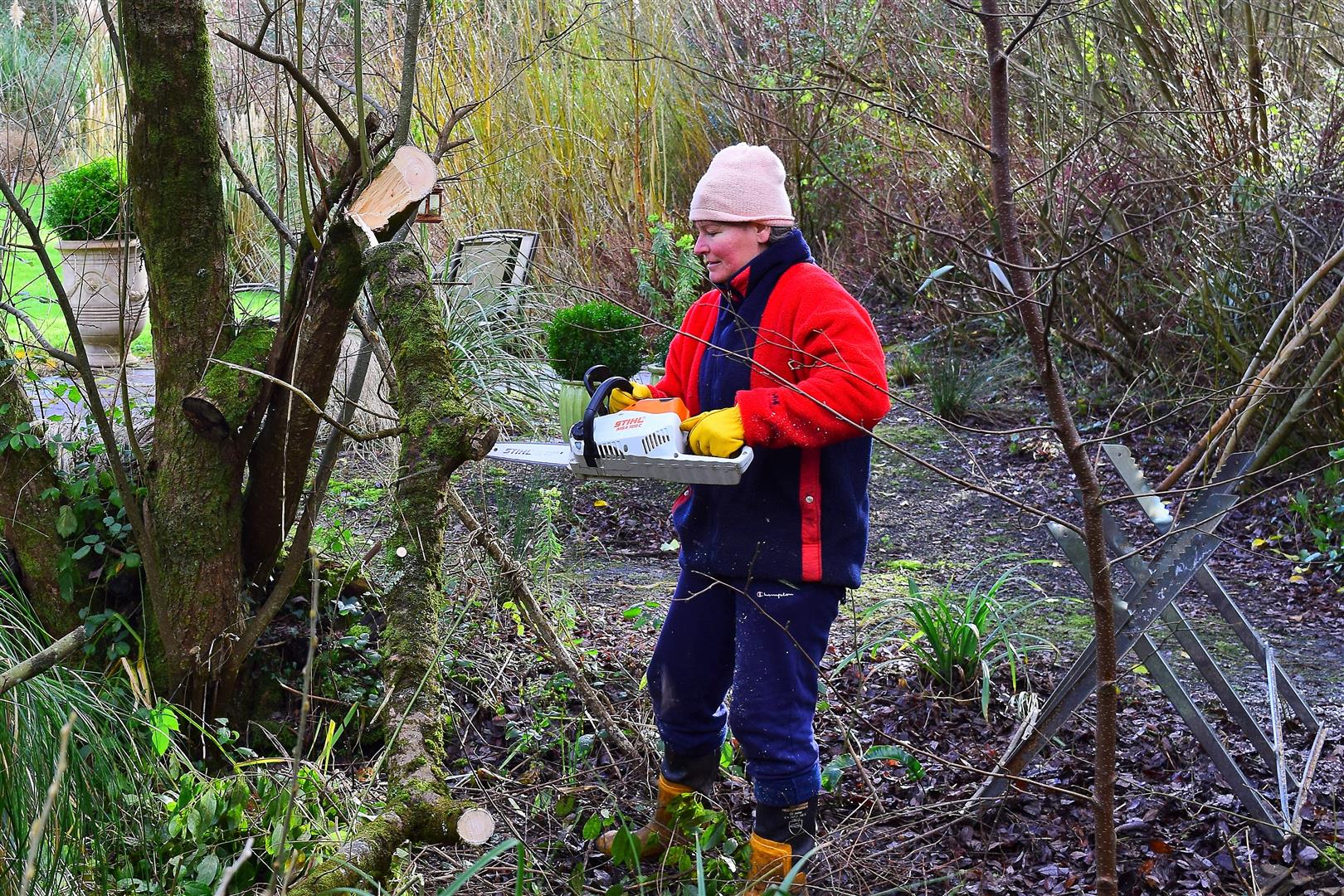 I have titled this blog Goodbye Winter as tomorrow , 1st February , St. Brigid’s Day in Ireland , is officially the first day of Spring but looking outside the window one has to be a supreme optimist to actually believe it !

Finally One of my favourite all year round perrennial plants , euphorbia characais , looking good even in January 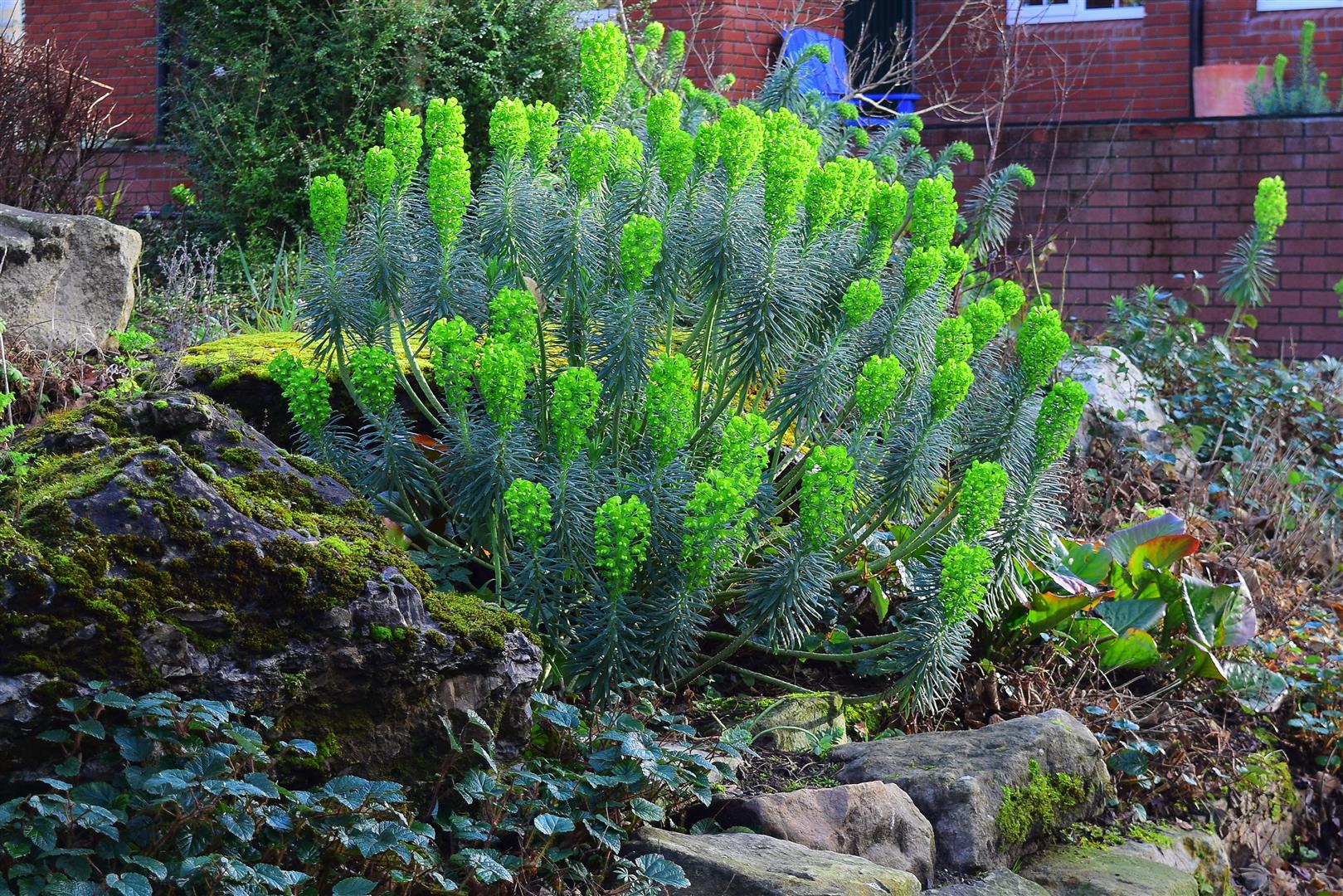