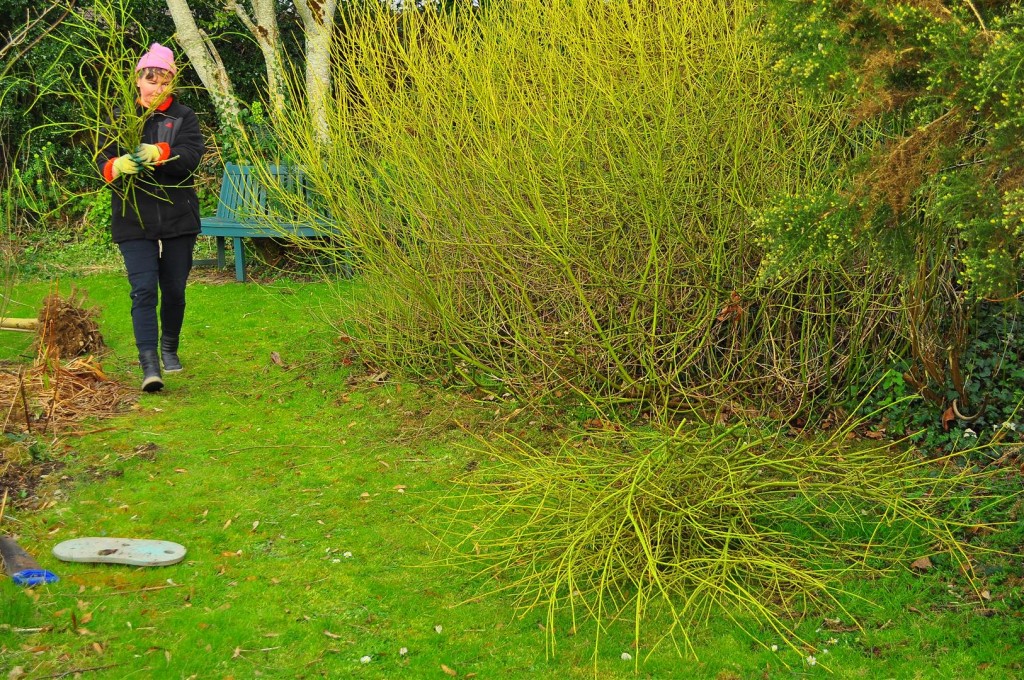 Cutting back the cornus in the front garden March 17th 2015

We have an ongoing project in the woodland area where over the years we have been thinning and tidying up the conifers planted by the original owners of the land back in 1985 and a few weeks ago in March we had Peter with his chain saw for two full days …..  back breaking stuff as the blocks and cut branches have to be collected and stored . Poor Peter who is more used to dealing with me when working here and Irish style has plenty of tea breaks and chat however the wood is and has always been Snezana’s project (which she is very proprietorial about so hands off !) and dealing with a Danish / Macedonian who does not know the concept of cups of tea and chat  ….. you work your ass off without a break !! 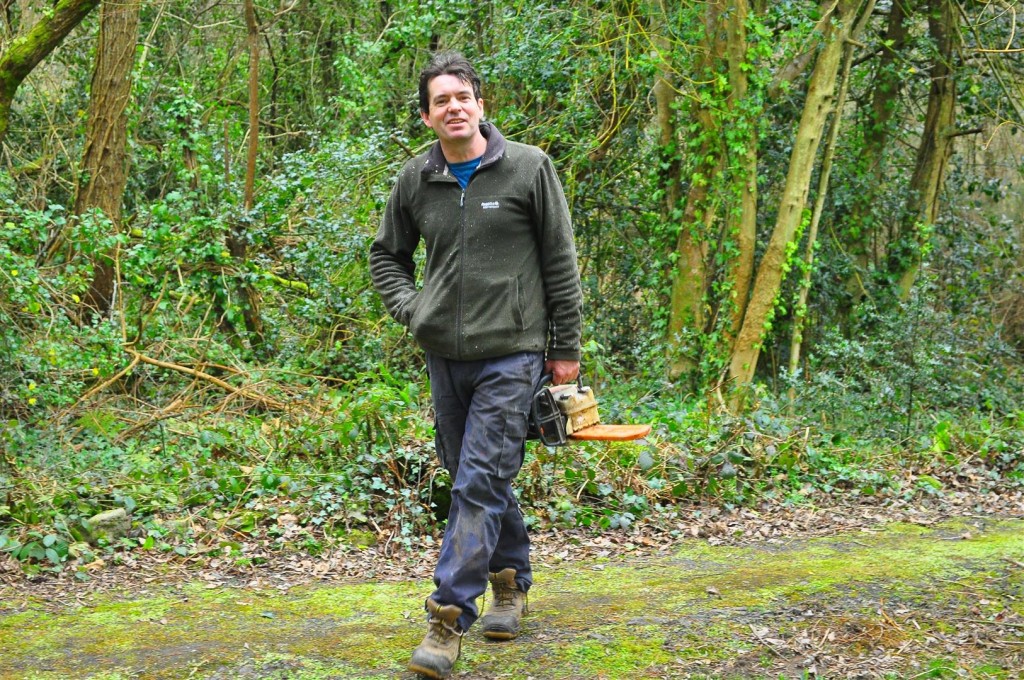 I did manage to smuggle some tea out to Peter , the Petrovska prisoner ,  now and again before being chased off by an irate Macedonian shouting “ Ve haf work to do ” !! 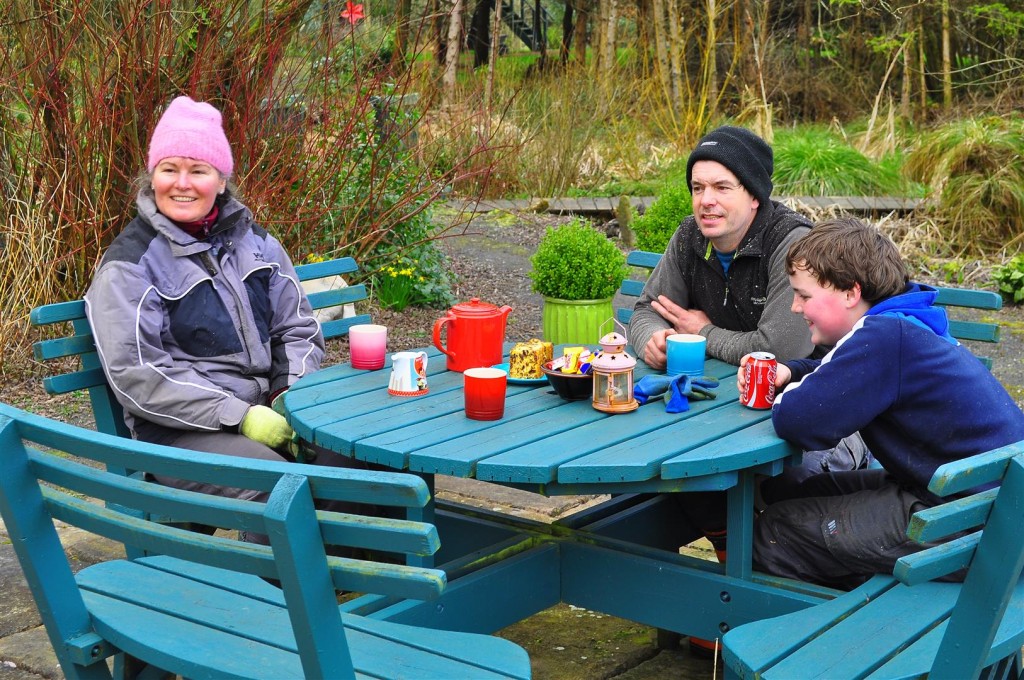 April is one of my favourite months in the garden , everything is starting to bud and there is a tremendous feeling of optimism ( if you are up to date in the garden otherwise April can be a reminder of what you HAVEN’T done !) and plants you haven’t seen since last Spring are suddenly in bloom … and I am thinking here of caltha , the marsh marigold and the elusive  Lysichiton americanus otherwise known as the American skunk cabbage which grows in wet areas  …… beautiful stunning flowers ( very briefly ) and then the leaves continue growing and can reach a metre high …. first imported to the UK in 1901 ,  a native of North America where bears eat it apparently after coming out of hibernation as a laxative …. you try giving a bear with a blocked up tummy  an enema then ! 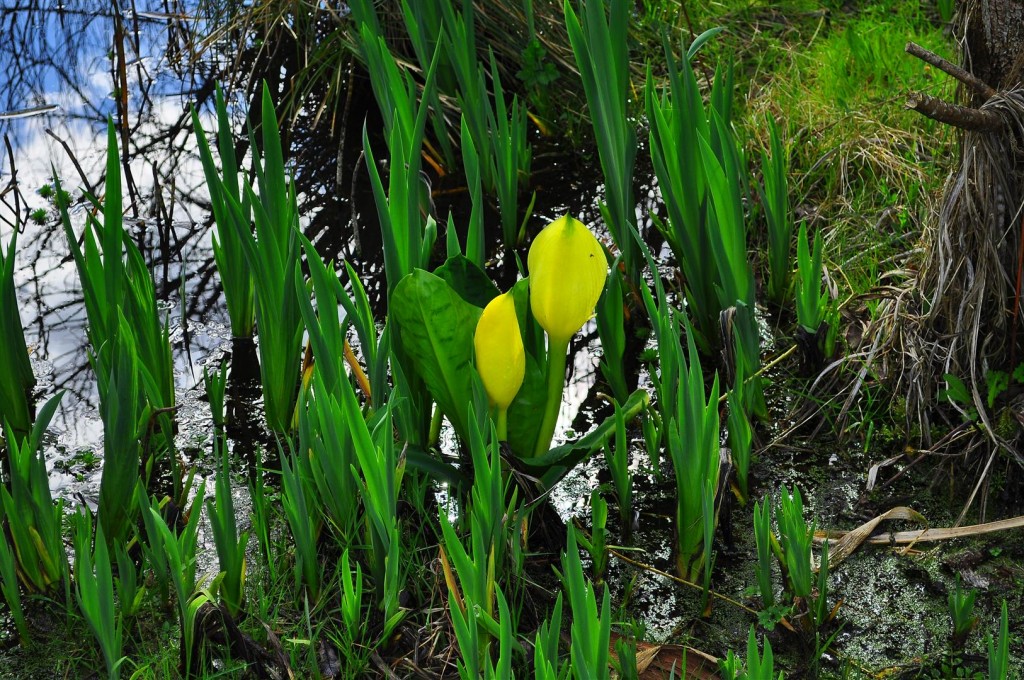 I had never heard of  the plant and first saw the American skunk cabbage over 30 years ago when on a cycling trip through Southern England  …. 7 am one morning after breakfast in a Youth Hostel I was pedalling along a country lane in Kent when in a sunken garden attached to a large Georgian House I got my first glimpse of this magnificent foliage plant and it being so early I figured no one was up yet so walked in to see the a large clump of these mysterious yellow heads up close ….. suddenly a voice said “ you like the skunk cabbage then ” and I looked up to see this woman in a dressing gown with a cup of coffee watching me from the shrubbery ……. there was something familiar about the garden owner who invited me to take my time and look at the rest of the garden ….. and that is how I met Hayley Mills , the the 1960’s child star star of such famous Disney  films as Polyanna  and the Parent Trap ! 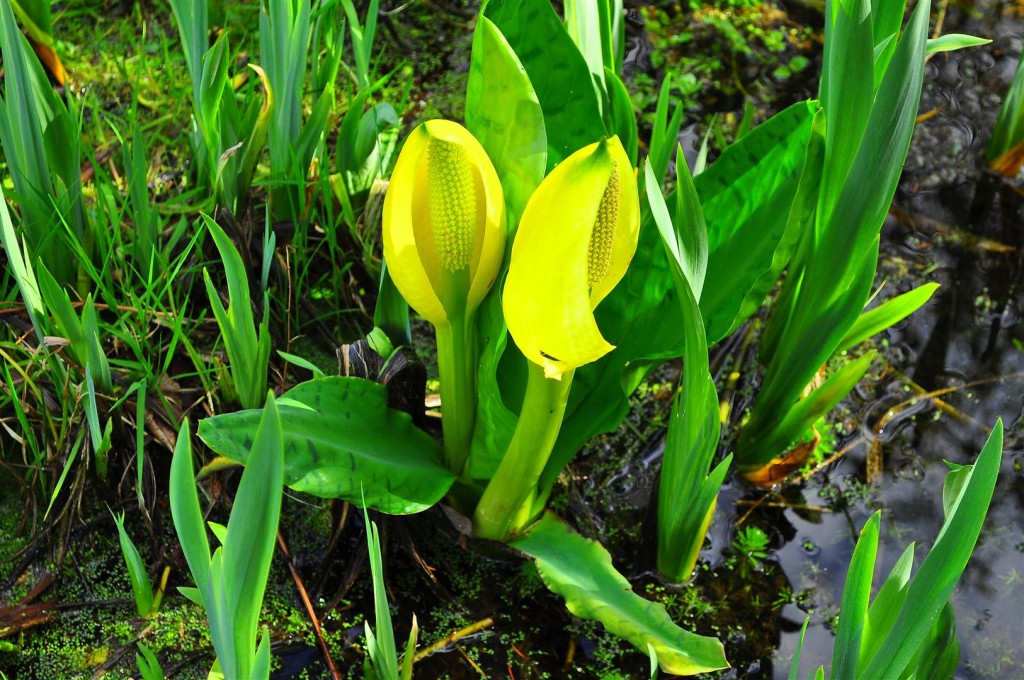 April is also the month of the magnolia tree , there is only one variety to grow , soulangia which has the pink or while tulip shaped flowers and which for me is absolutely the best flowering tree ever ….. of course a rubbishy looking tree for the other 49 weeks of the year but for that magical flowering period of three weeks you could forgive a magnolia for being nondescript otherwise !

Unfortunately our soil here will not allow for  magnolias so I have no photographs to show …I could use a photo from the internet but I have a policy of only illustrating this blog with photos from the garden here …. but to compensate here are some euphorbia  in full bloom ! 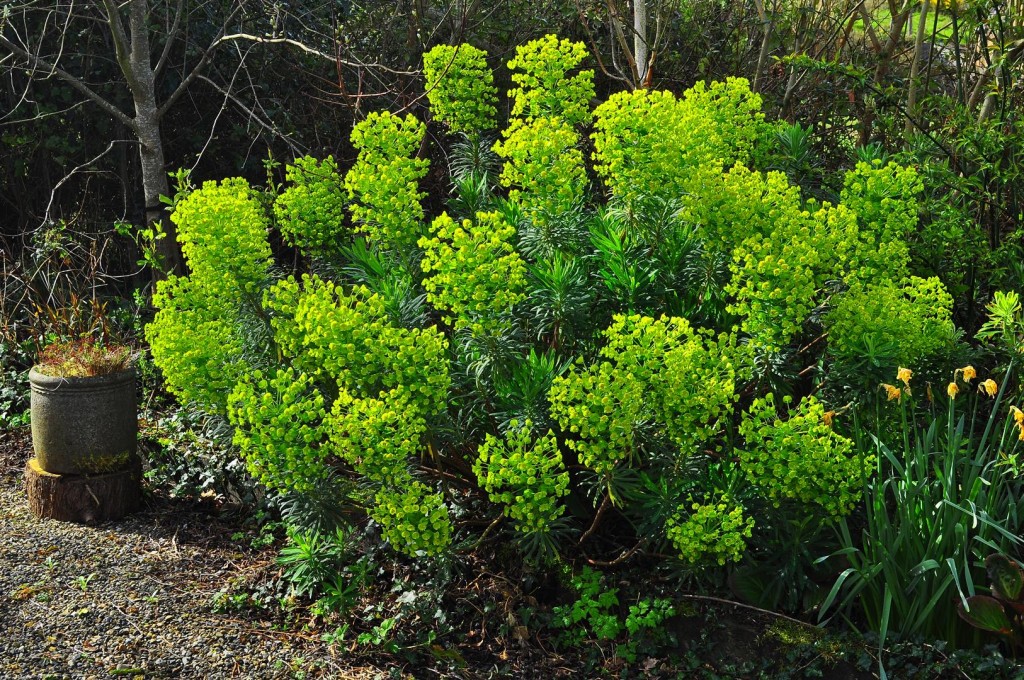 When I planted up this old tin bath with bulbs last November I choose the miniature daffodil Jetfire as the centre piece planting instead of my normal first choice tete a tete daffodil and a few weeks ago when it first came into flower I was a bit disappointed as although classed as a miniature it is taller than tete a tete and I thought it out of proportion to the container however tete a tete flowers early in March and sometimes in late February when you normally are looking at the display from inside the window wheras Jetfire is in bloom now in mid April when you can be outside in good sunshine to enjoy it …. so Jetfire has been reprieved and will remain in it’s container ! 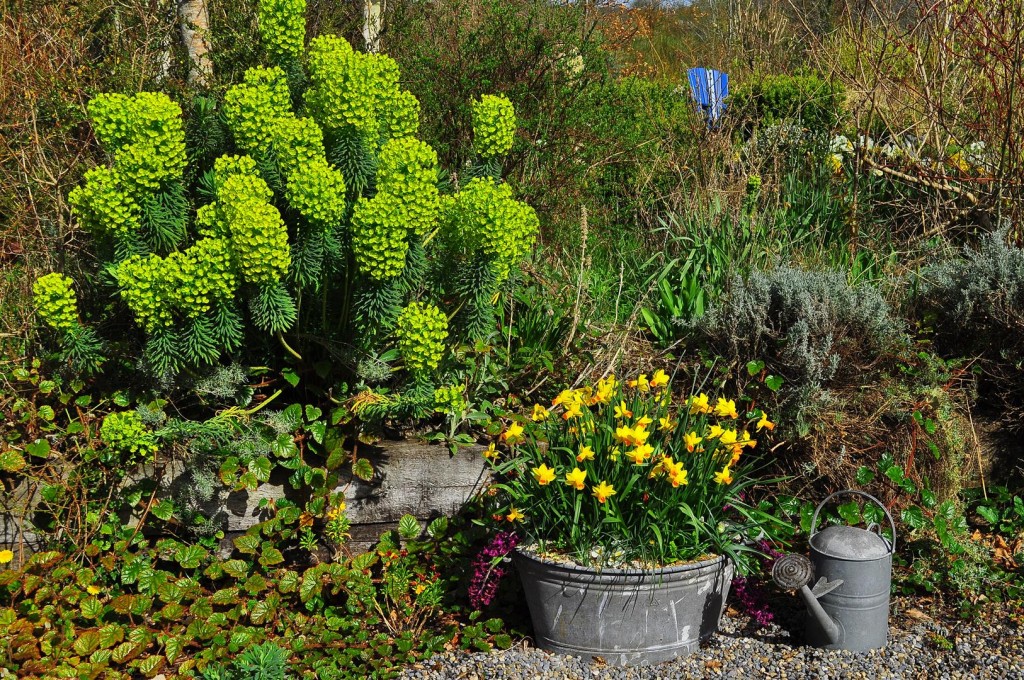 The old galavanised watering can beside the tin bath was given to me by , Janet , a gardening friend from Clonmel … it was  abandoned in her garage when she bought her house forty five years ago , was stored away and  forgotten about until she happened upon it last week  and donated it to the garden here .

Early April is also a great time to take cuttings and to try your luck with them immediately into the soil without the usual potting up etc. as the plants are starting to burst into growth but no hanging about as the quicker the slip gets into the ground the better otherwise they wilt and I find popping the slip immediately into a plastic bag which you seal , works best ….. perrenial geraniums work well with this , a quick tug at the base and get as much root as possible , pop into the bag and into the ground within ten minutes …. I have a variety called Biokovo , from the mountain range in Croatia , which mounds up nicely and is a great ground cover but the smell of woodland that the leaves give off when rubbed is just amazing and takes me back immediately to the Biokovo Mountain range which runs over 30 Km. just behind Makarska on the Dalmatia Riviera, my favourite place in Croatia . 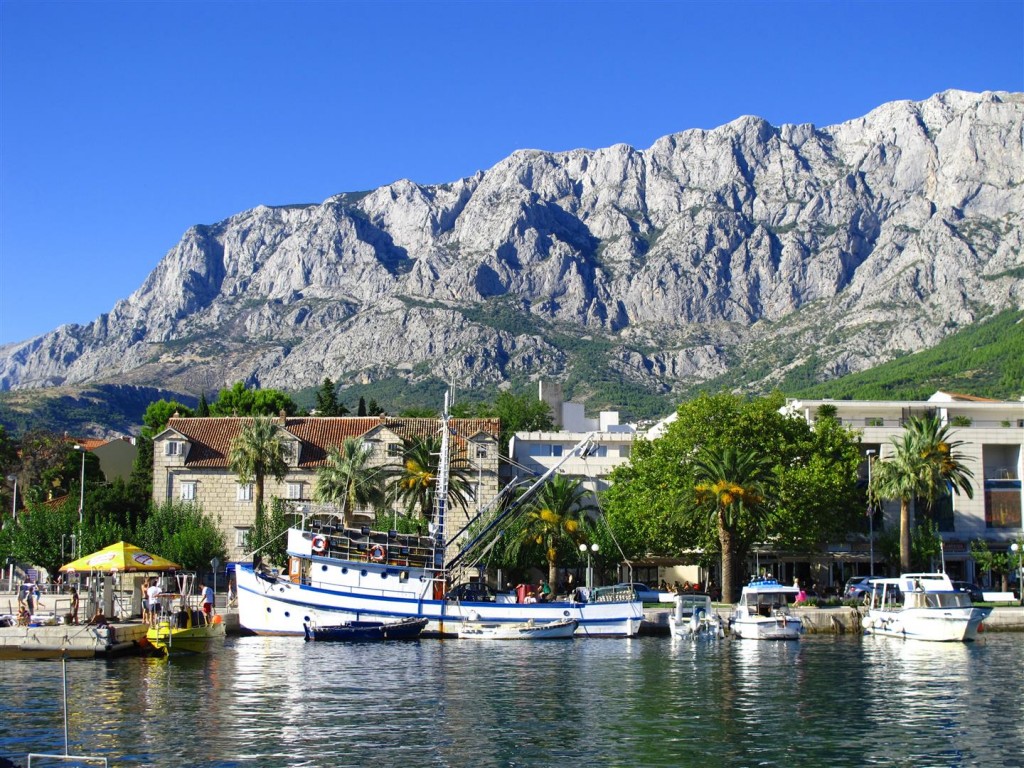 Makarska with Biokovo Mountain …. my favourite place on the Dalmatian Coast

Another good plant to chance your arm with at this time of year and put a cutting or rooted slip straight into the ground is bergenia , the huge leathery leaved plant commonly known as elephant ears because of its size ….. just tug gently on any stem with a leaf on the outside of the plant , get as much root as possible …actually you can do this at any time of the year with bergenia and have a good chance of success although sometimes the leaf will die back but leave it in the ground as normally new growth will appear within weeks .

I am sure all Irish reading this will know the origin of the phrase “ chancing your arm ” but others  reading this may not ….. when a truce in a war between two rival Irish clans  , the Butlers and the Fitzgeralds , was being organised  in 1492 both groups came to Saint Patrick’s Cathedral in Dublin where a hole had been knocked through a door …both Chieftains had to shake hands through the hole to seal the deal however it could and did happen that one leader did not agree and lopped off the arm extended to him through the hole … today, this door is known as the “Door of Reconciliation” and is on display St Patrick’s Cathedral …..  now you know !

Colour in the  front garden April 2015 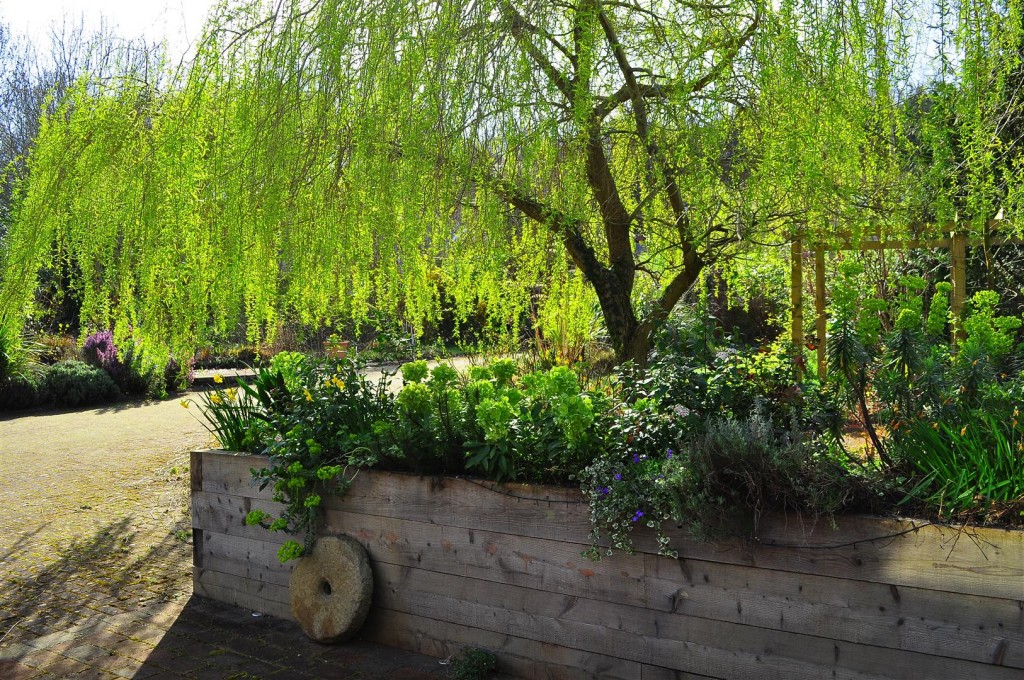 Recently we have been in Jordan and enjoyed both the spectacular mountain scenery around Wadi Dana and the world famous ancient city of Petra  …. we trekked 16 Km. down the Wadi Dana just as the wild flowers were in full spring bloom and although the black iris is the national symbol of Jordan the plant I fell in love with is the asphodel which grows wild all across the rocky terrain and survives because no animal will eat it .. not even the goat herds which are the main economy for the local bedouin  . 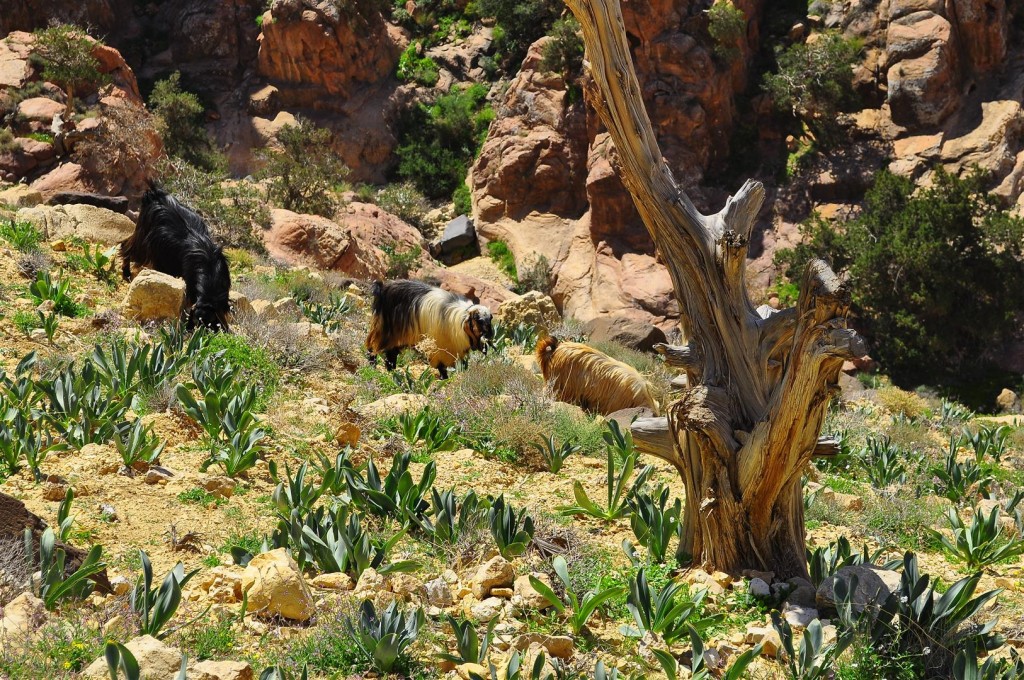 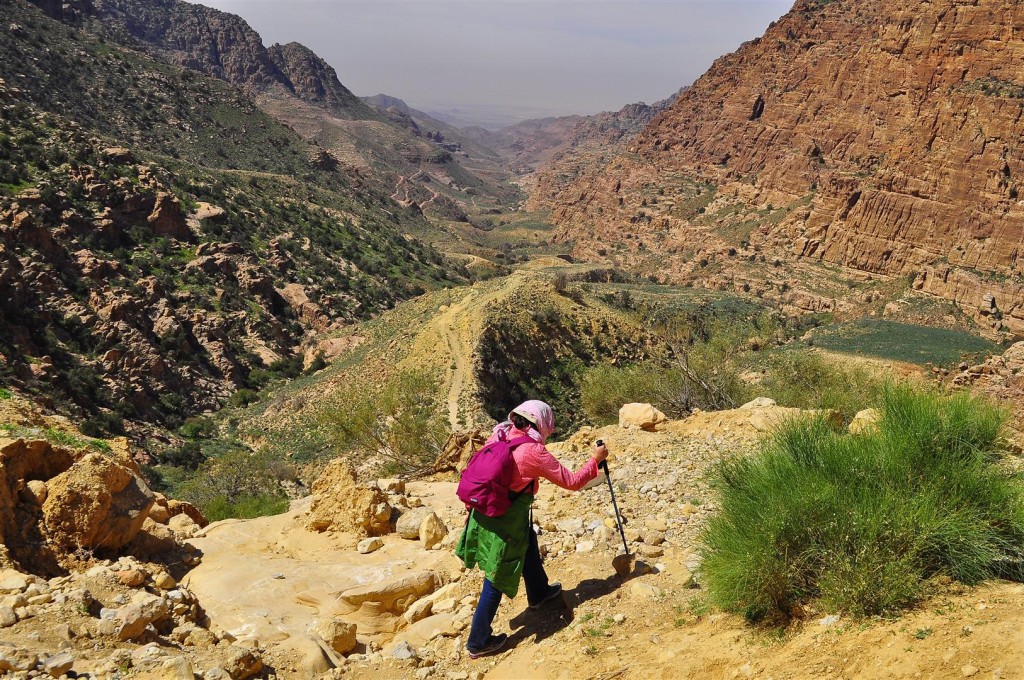 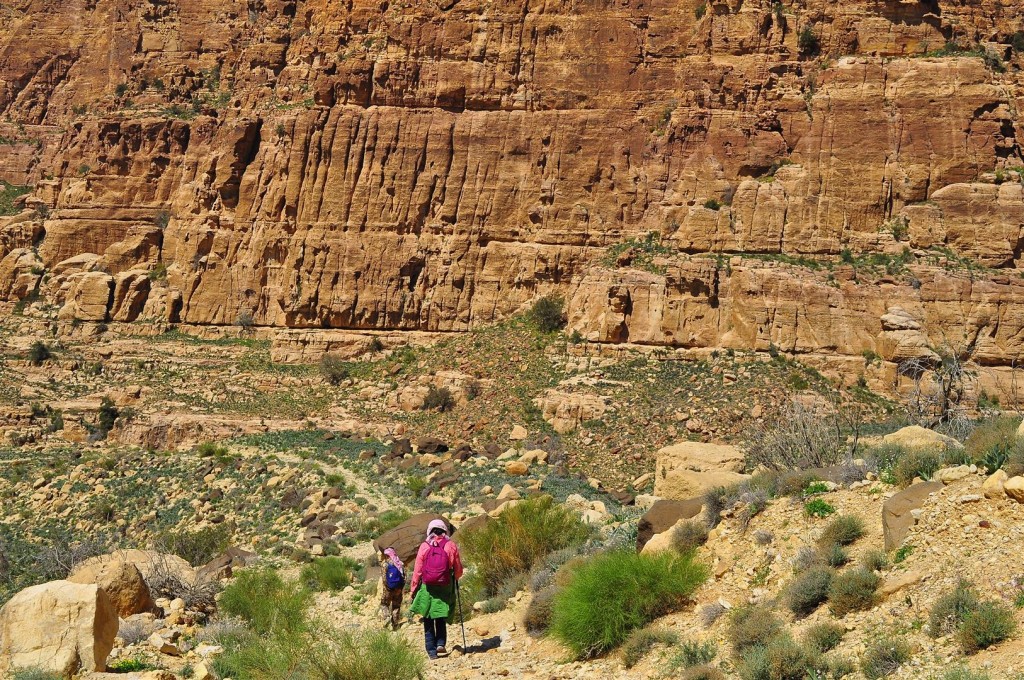 Did you notice the casual way I mentioned the 16 Km. trek  and I hope you were suitably impressed …. the reality was that this was no walk in the park but a traverse down a rocky canyon from 5000 feet to almost 300 feet below sea level almost to the Israeli border on the Jordan river  and which although breathtakingly beautiful was at times ( most times ) over rocky , boulder strewn , potential knee and ankle wrecking  terrain which reduced me to a whimpering mess …  to the point that Snezana and Ahmed , our guide , were taking bets as to whether I was still behind them at times … and I had even  learned how to whine “ are we there yet  .. are we there yet  ” … in Arabic   !! 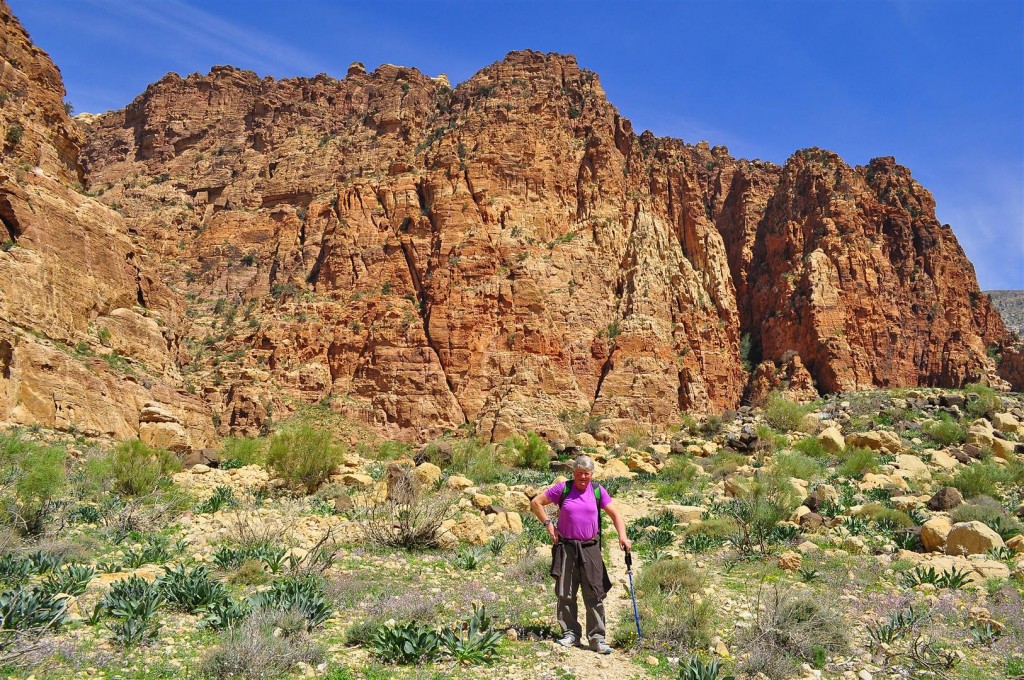 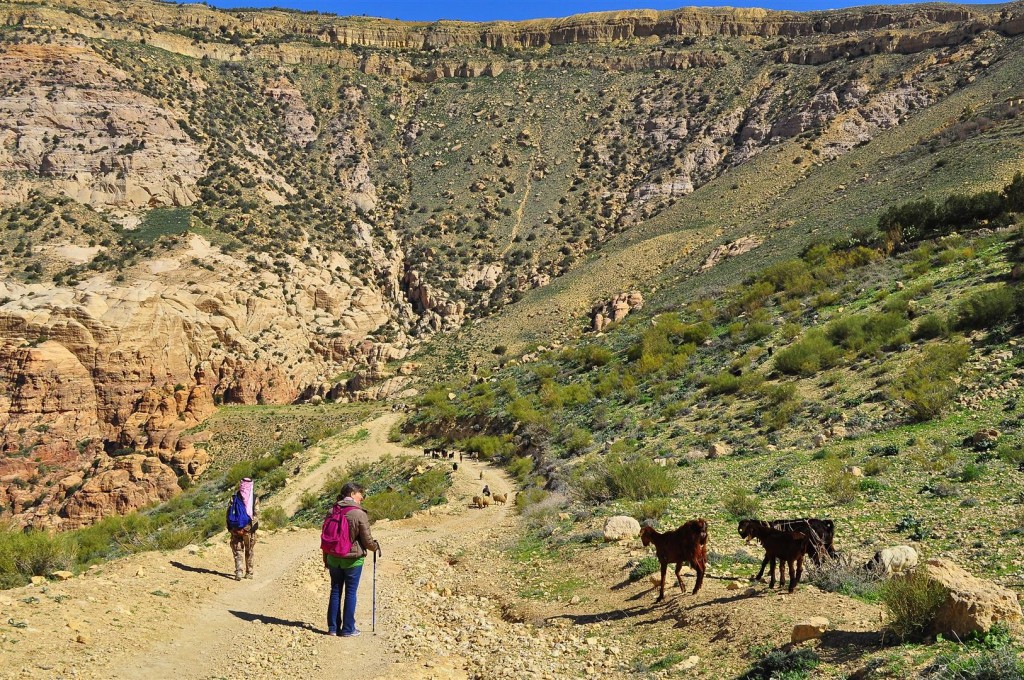 A Bedouin child wondering just who these two sweaty red faced foreigners are ! 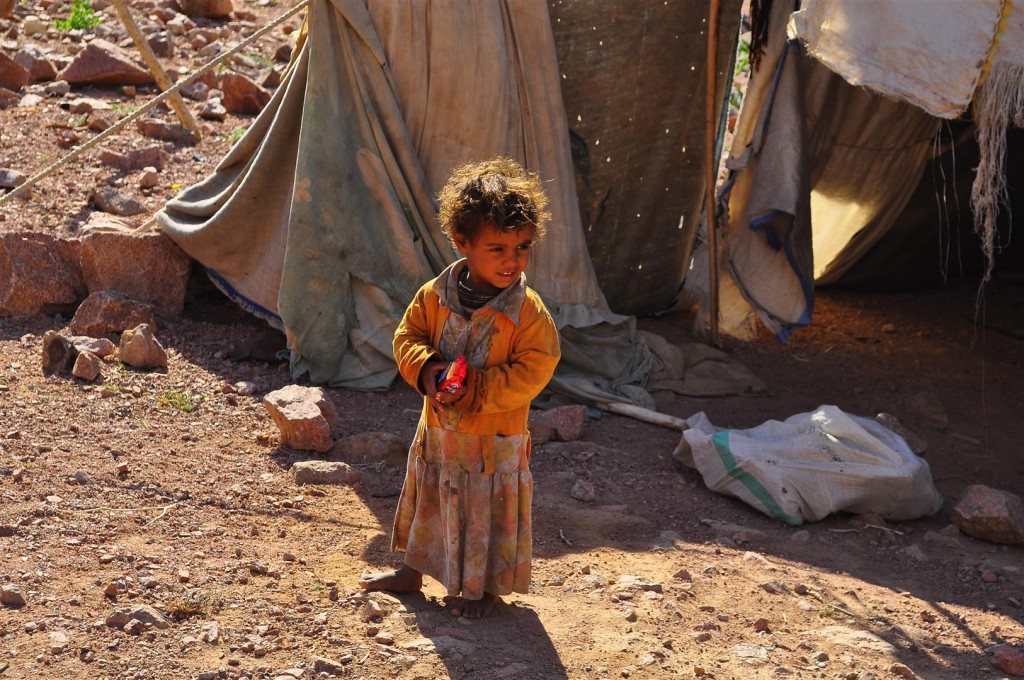 Bedouin camp at Feynan , near the end of the Wadi Dana Trail , March 2015

Spring is the perfect time to visit the Jordanian desert and for a gardener it is a chance to see the marvellous wild flowers that bloom for just a brief period in February and March before the hot weather dries everything up . 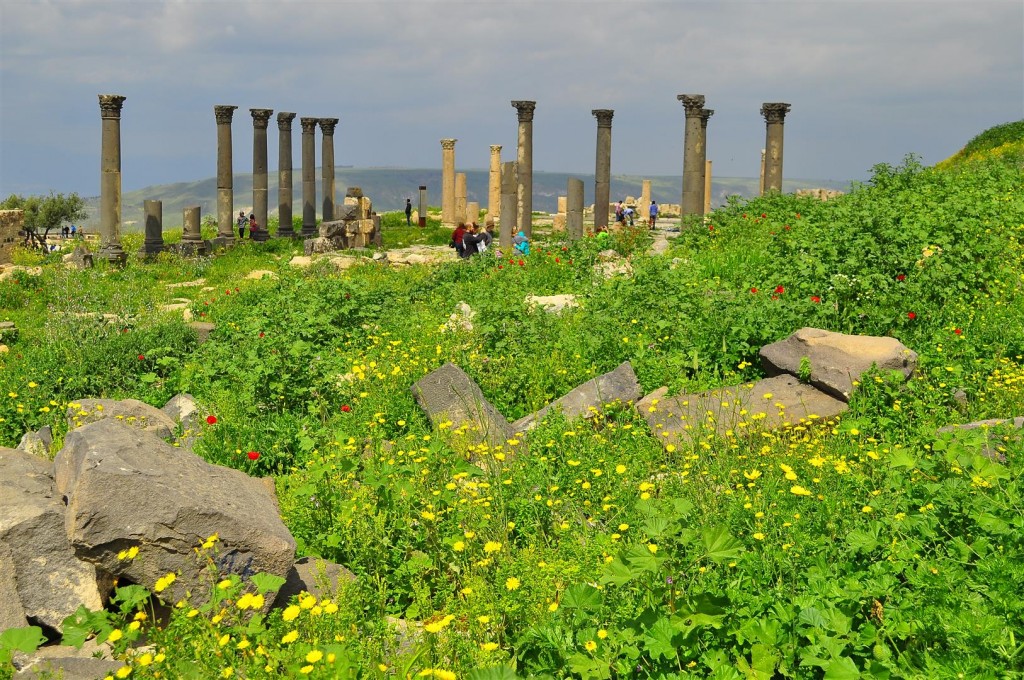 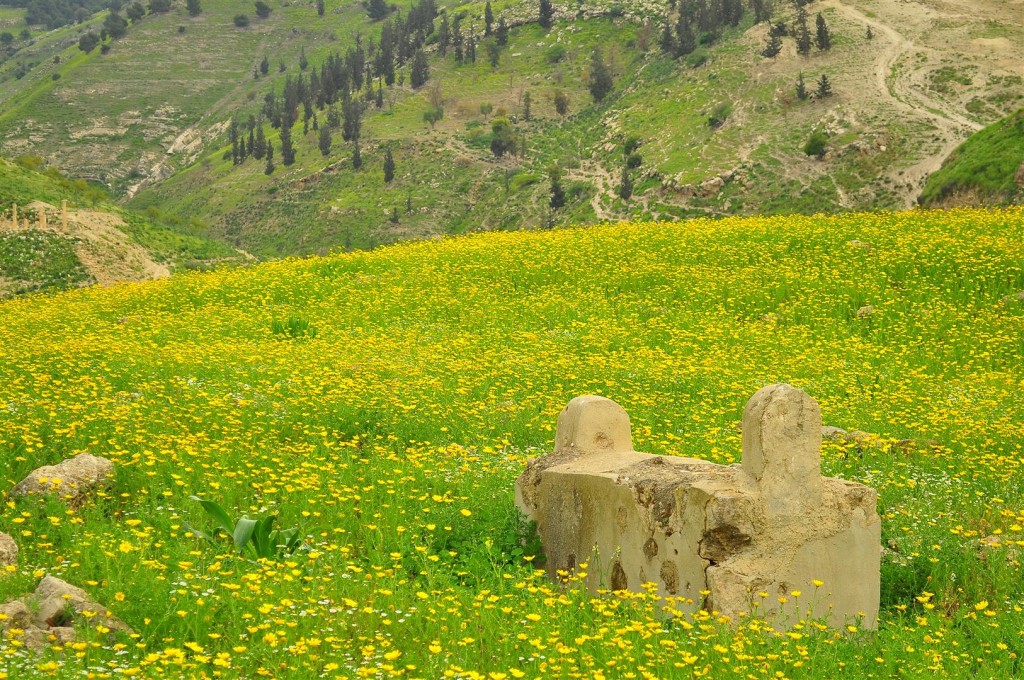 Petra is a special place , my favourite historical site in the world  that in my opinion rates even higher than the pyramids of Egypt ….not of course in terms of history as the pyramids are far more important but in the sheer beauty of both the buildings and tombs carved out of the solid rock together with  their awesome setting  , impossible to take a bad photograph of Petra it is so beautiful .

Petra is in the middle of the Jordanian mountains surrounded by  a desert wilderness with no obvious way in or any clue that an ancient city is hidden inside the towering cliffs . There is one entrance concealed deep inside the mountains , a narrow canyon with high cliffs on both sides which are sometimes so close you can touch both sides at once and after walking 1200 metres , suddenly through it’s narrowest point you see this magnificent facade carved into the solid rock opening up ahead of you … this is the Treasury , Petra’s most famous building . 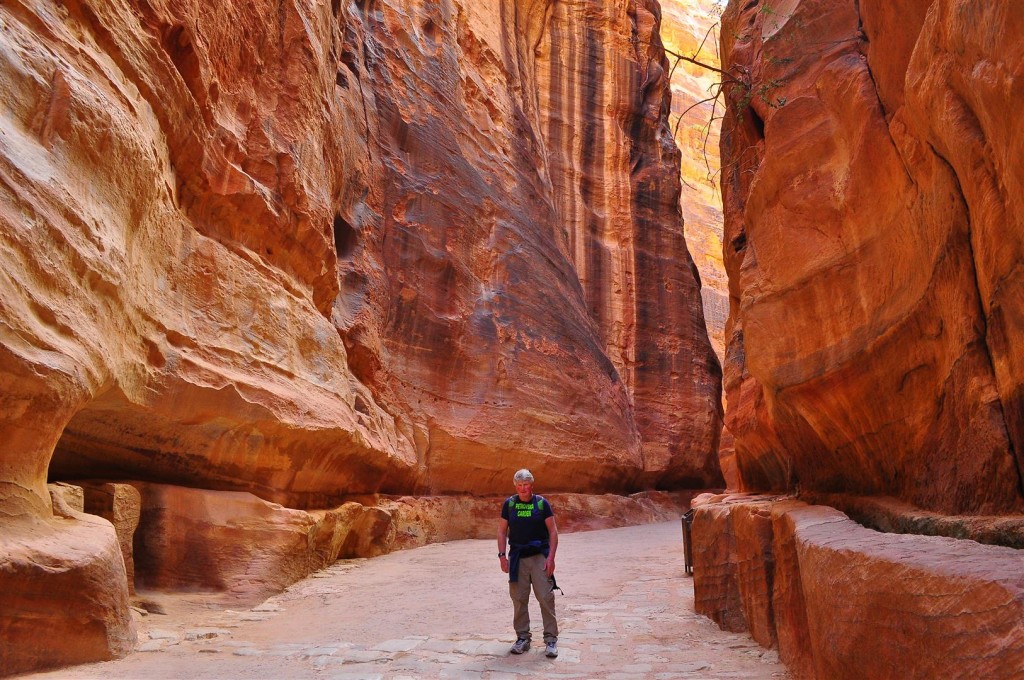 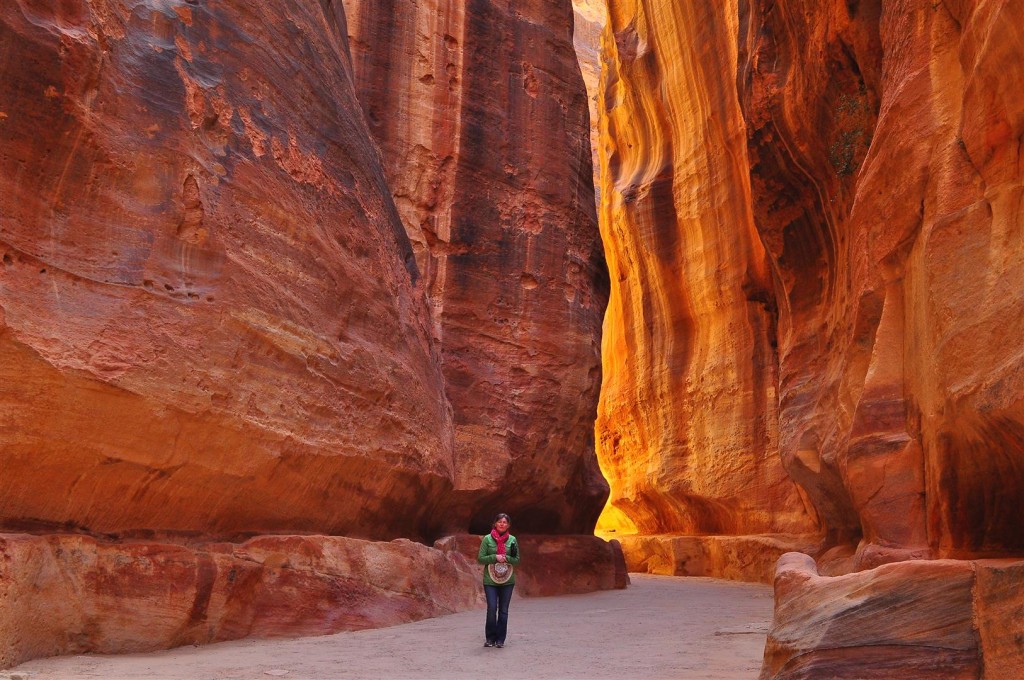 First glimpse of Petra from inside the Siq 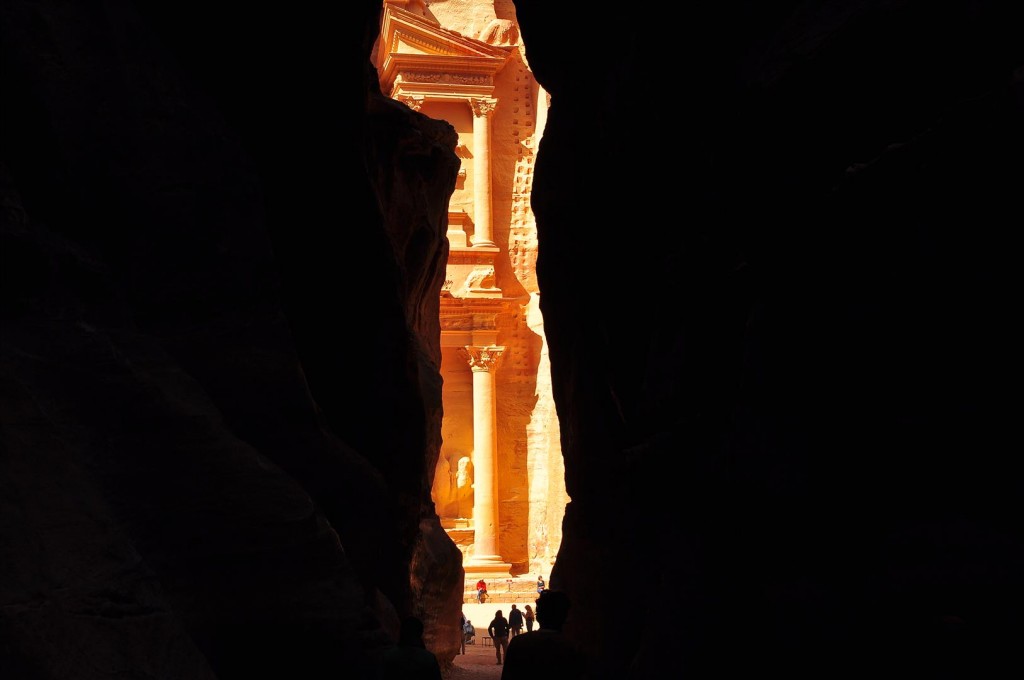 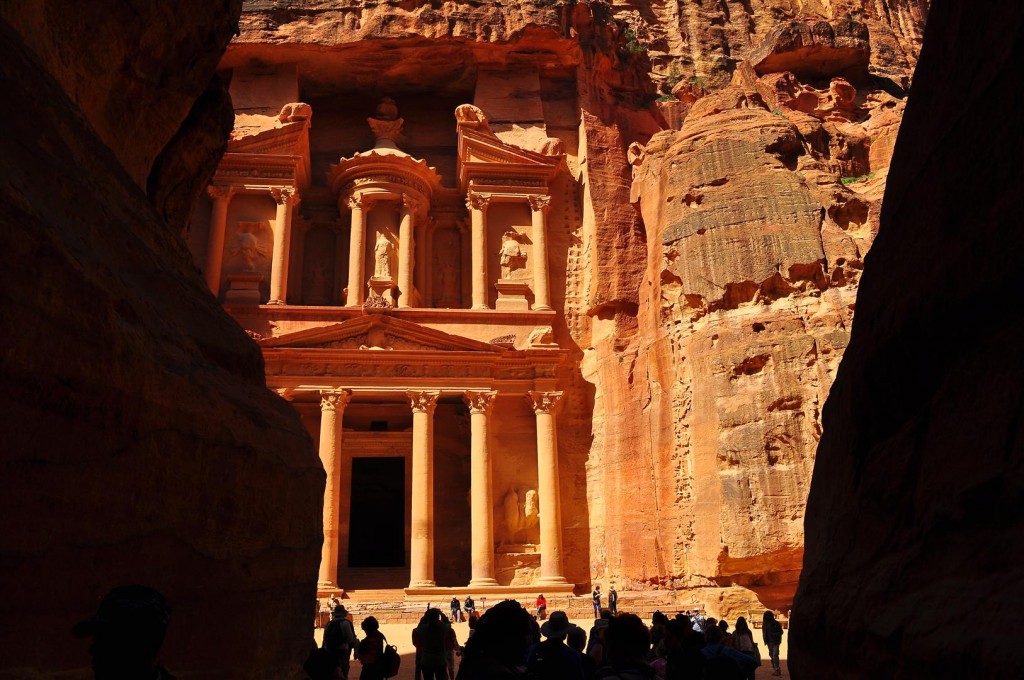 What makes Petra unique is that the tombs and the major monuements such as the Treasury and the Monastery are all carved out of the solid rock and no building blocks are used  …not for nothing is Petra called the Rose Red City and here are just a few photos which I hope will convey the awesomeness of the place . 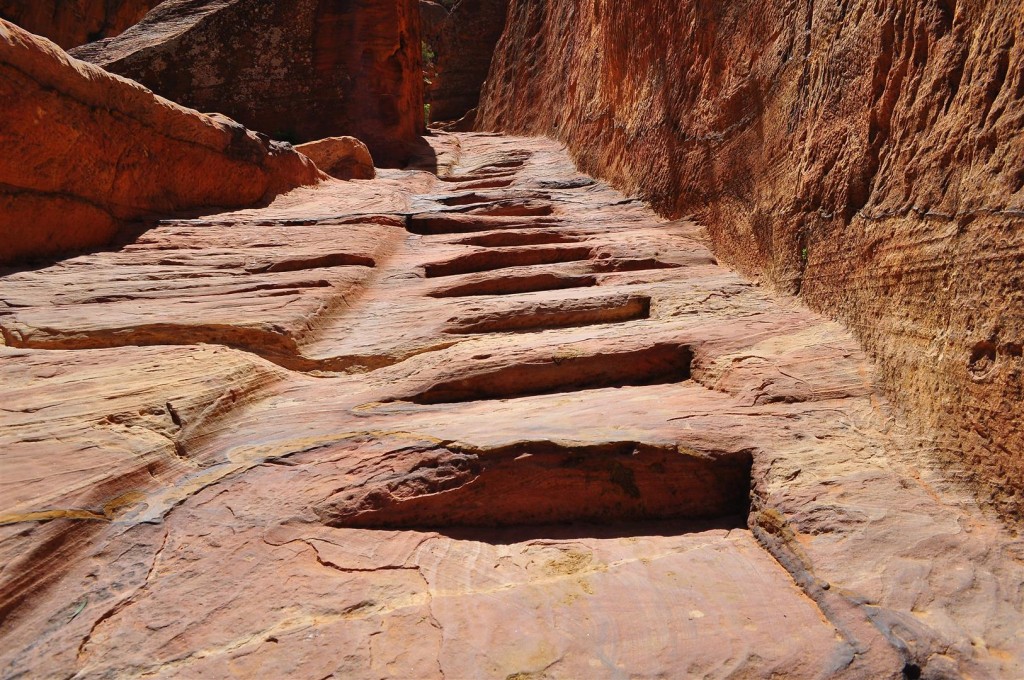 And  after a climb of  977 stone steps you finally reach the Monastery , Petra ! 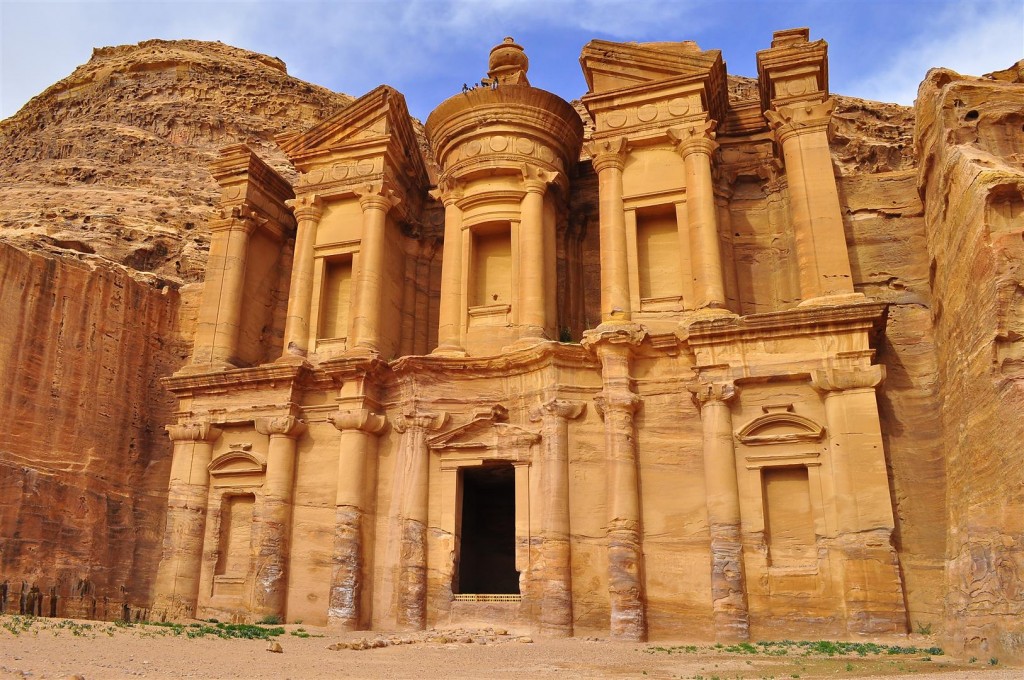 After which you take a long rest before walking the 977 steps back down ! 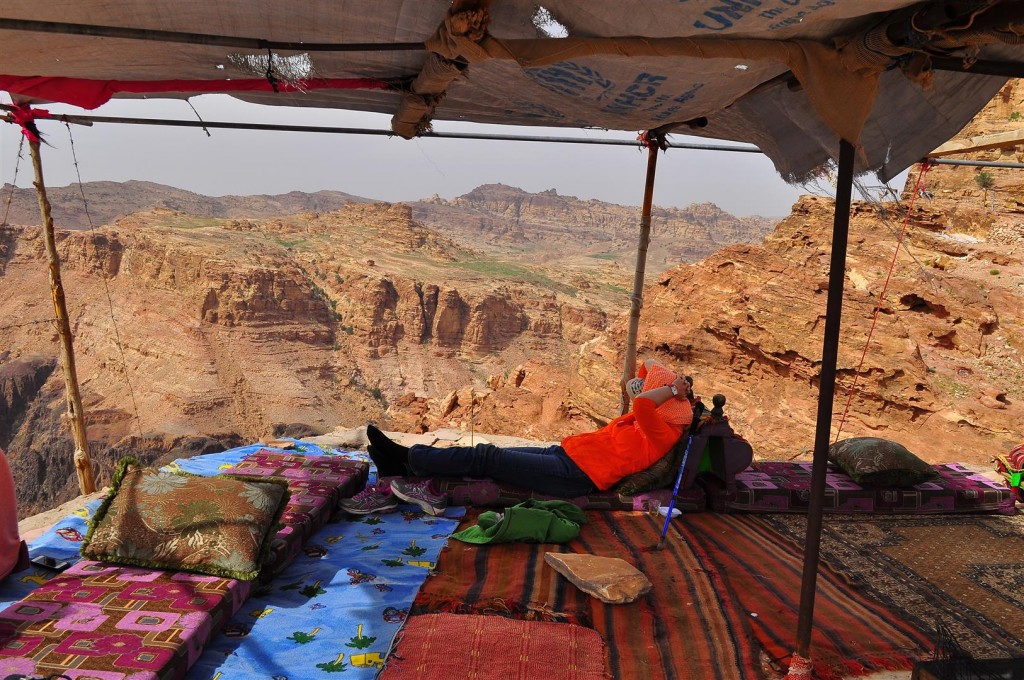 Snezana taking a break before the 977 steps back down from the Monastery , Petra

Finally a Happy Orthodox Easter tomorrow to all my Orthodox friends throughout the Balkans !