The end of October and the best time for leaf colour in the garden as everything makes one last effort before winter steps in from next week but not all doom and gloom because then it is the time when trees and shrubs with good bark come into their own with the white bark of the silver birch and the red cornus taking us through to next March . 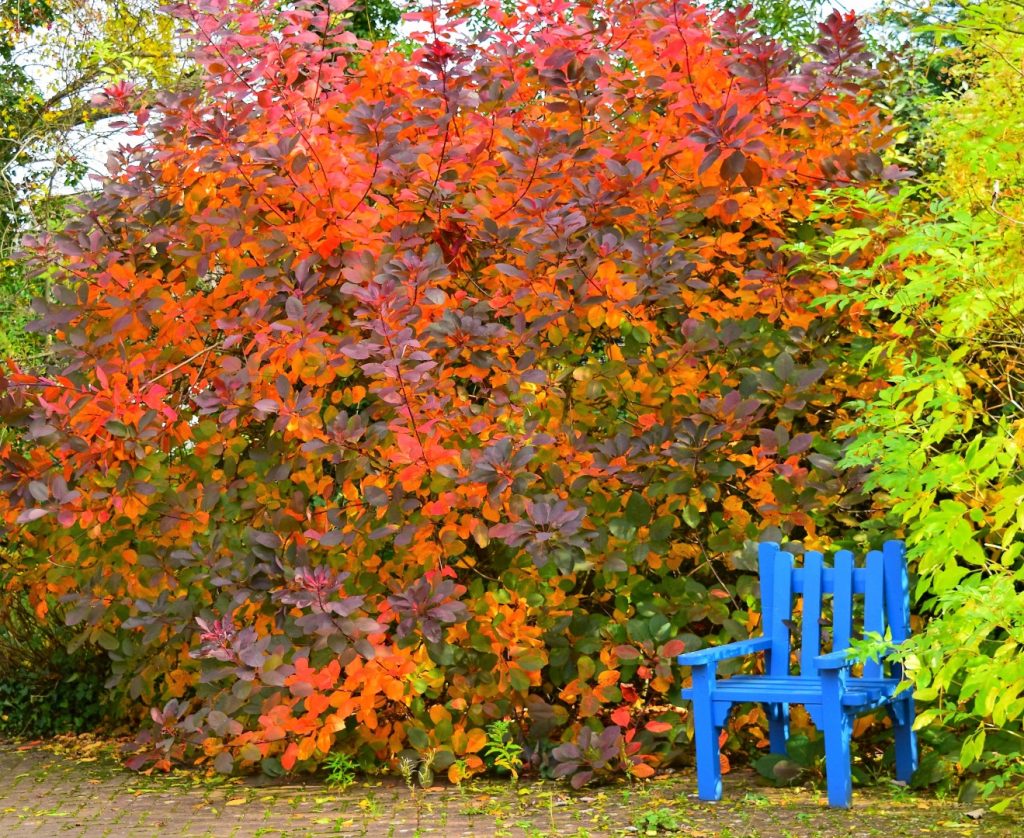 If you plan your garden correctly you can have interest there for the entire twelve months and always something to look forward to … which is why over the coming weeks I will be buying and planting dwarf spring bulbs for two new beds I opened up this Spring while adding to the established borders with taller February /March flowering daffodils . I stick to two or three trusted varieties of daffodil , ones that have done well in our conditions here and tete a tete is my dwarf daffodil of choice while Daffodil February Gold and Winston Churchill are my two full sized bulbs , I don’t plant tulips as they are short lived in our wettish soil and rarely come back after one or two years . 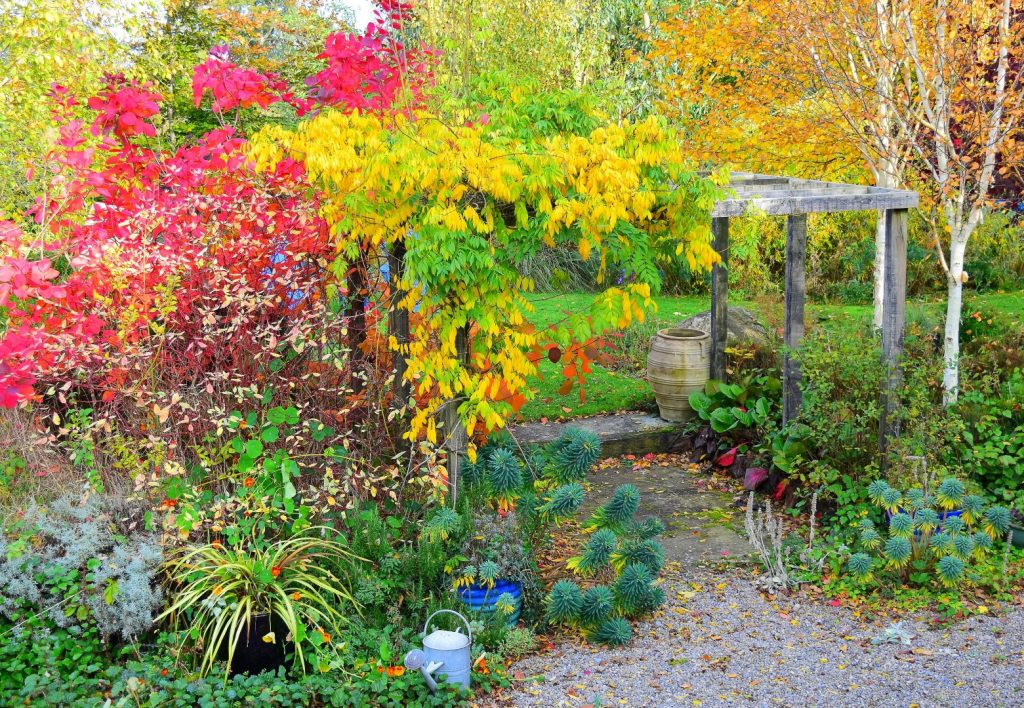 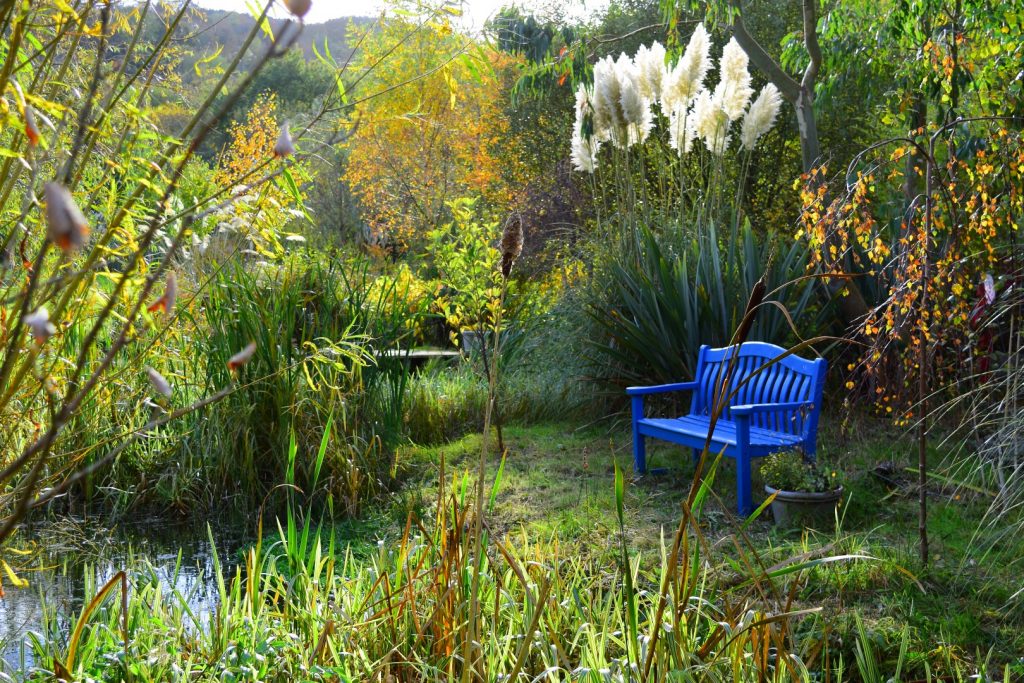 Last week I planted six oak trees in the top field , all different varieties of oak and all chosen for strong leaf colour and the fact that oak is tolerant of wet conditions and for another reason that deer don’t touch oak apparently because of the tannin in the leaf … a big factor in this garden is that there is a lot of water and a lot of destructive deer ! I had picked out the trees in the Clonmel Garden Centre with the assistance of Susan who had sourced the trees for me on a trip to a midlands Garden Nursery and who is familiar with the garden here and the wet conditions and it struck me later when researching the trees with the RHS guide how lucky and spoiled for choice we are these days with the wide variety of plants and trees available  as for example one of the oaks , a tall columnar type , quercus castaneifolia “ green spire ” , is from Russia while another , quercus phellos , a lovely willow leaf oak , is from Louisiana in the southern US … how different it was in the early 1900’s when foreign trees and plants were introduced by plant hunters arriving back from costly expeditions to Japan and China .

Quercus Phellos on the right , Quercus Castaneifolia on the left October 20th 2016

I also added some trees for colour such as a purple beech and a maple Crimson King which has a beautiful  dark blue leaf together with a weeping pear which has a cream leaf and two columnar growing beeches and a weping lime tree , tilia petiolaris , which will add some structure .

This large area has always defeated me design wise so last year’s addition of paths together with this planting of parkland trees will all help to fill it in with greenery .

A few weeks ago looking at how well the line of nine silver birch along one of the paths have complemented and framed the path I decided to repeat the design along the other path where I already had two river birch planted three years ago and to these I have added five more river birch that Peter Cullen sourced for me at a specialist nursery along this path and this will have the added bonus of the striking white bark to brighten up the area in the winter months . River birch are as the name implies suitable for wet areas but just to be sure Peter raised their planting a half metre above the ground , similar to the more popular silver birch except they bulk out better and the bark although white has a pinkish tint and I like them very much as a tree . In this part of the world silver birch are an expensive tree but when I lived in the Balkans you would drive through forests of silver birch as they were the native tree and in Macedonia they were used for firewood which always struck me as heresy ! 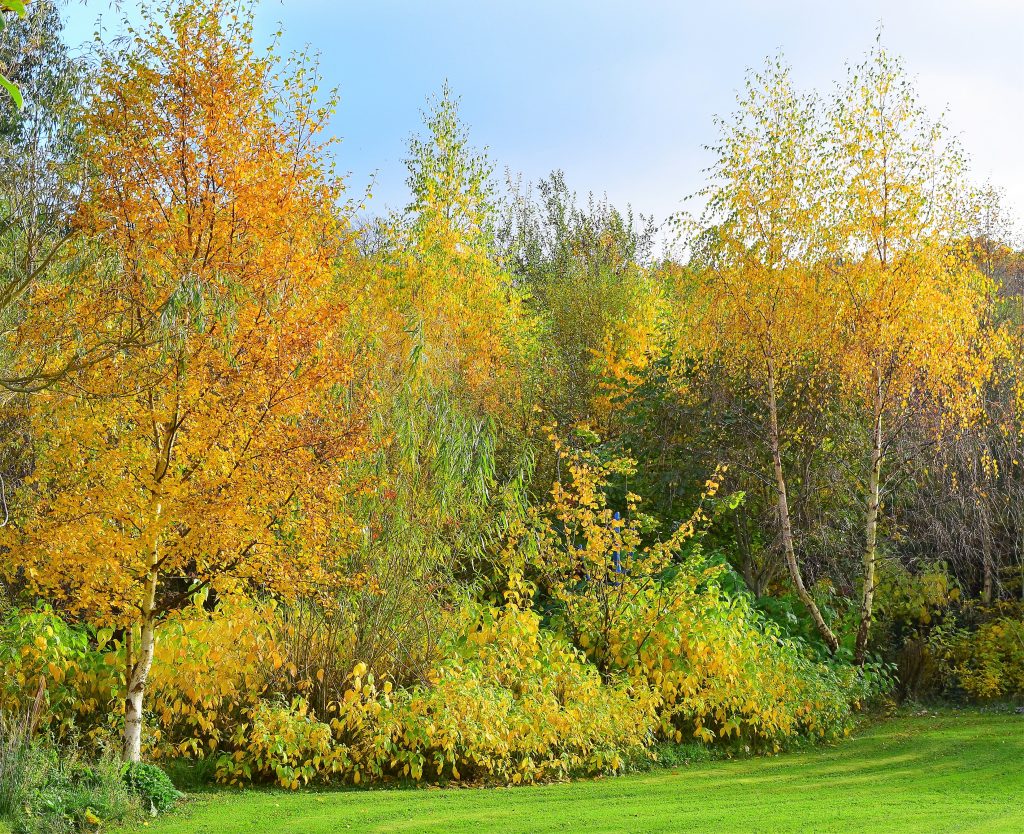 In all I planted thirteen trees as I hope they will carpet the area with leaf colour and shade and take the current open look off it and was lucky enough to find a tree I have been after for a few years since I first saw it in a friend’s garden but never saw for sale until now … a copper beech called Dawick purple which has all the beauty of the normal copper beech but this variety is narrow and columnar in shape and is ideal for planting along a path … a friend from my Sarajevo days , Marta Hryshchyshyn , was staying and her son , Dimitri , helped to plant one of the Dawicks as a souvenir of his visit ! 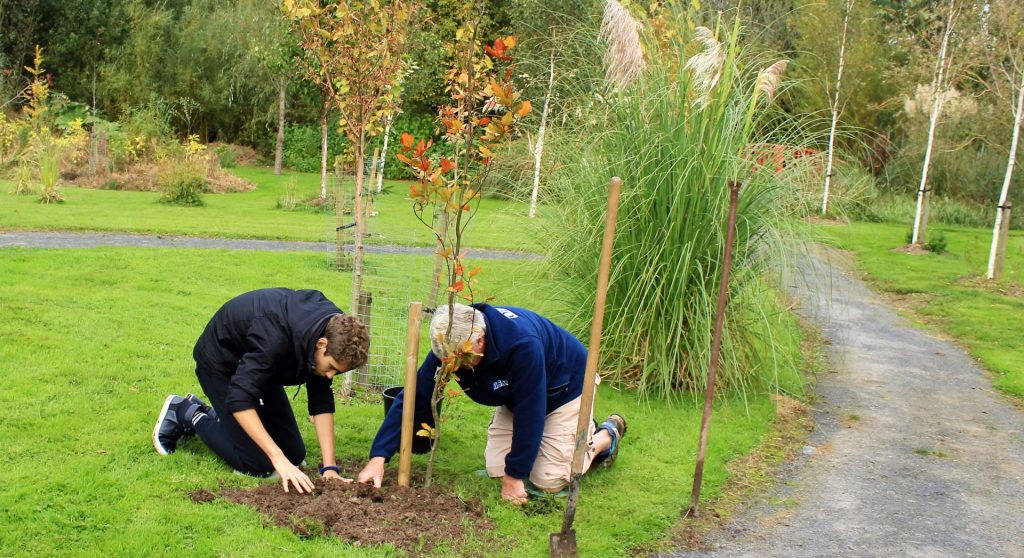 I mentioned that one of the trees I planted was the weeping lime , tilia petiolaris and this is the first time I have used this variety as all my lime trees here are of the upright stately type which are a favourite tree of mine since I saw them  for the first time when working in the Balkans and which I have loved ever since . I came across it this week in a book by Bunny Guiness about Prince Charles’s garden at Highgrove … “ Highgrove , a garden celebrated ” on loan from a gardening friend who has just come back from a visit to Highgrove . The first planting put in by Charles thirty years ago was a line of tilia peliottaris ten metres apart on both sides of the drive up to the house and a few years later they discovered that only two of the lime trees was petiolaris , the rest being the common lime so of course the entire wrong planting had to be dug up which just shows you that even princes get  screwed !

I say planted by Charles but of course the man has an army of gardeners and has been advised from the beginning by the top garden designers in the  world so never has to get his hands dirty … Charles famously had a valet who in the bathroom squeezed the toothpaste onto the royal tooth brush before handing it to the Prince ! Actually when you have that kind of Royal Family money available so that you can buy anything in the world you want it does put pressure on you to produce the most wonderful garden in the world if gardening is your thing  so credit to the man for the garden he has created and I am sure his love of gardening is genuine …. But … there always is a but (!) I have to take issue with one statement in the book which quotes Charles as saying “I was really taken by Yves Saint Laurent’s garden in Marrakesh , the colours and combinations on pots and seats for example and thought I must try that ” … an extraordinary statement given that Saint Laurent never claimed that this was anybody else’s garden except Jaques Majorelle’s who built and created it over forty years  from the 1920’s . Yves Saint Laurent bought the garden and restored it in 1980 and his ashes are scattered there but the garden is known  throughout the world as the Majorelle Garden so either Charles is unaware of this or else he is dumbing down to his UK readership for whom Yyes Saint Laurent is better known … Charles has made a pilgrimage to this iconic and one off garden in Marrakesh as I did and he cannot have missed the fact that everywhere on TV programmes , posters , tourist signs , T shirts and outside the garden itself it is called the Majorelle so one has to conclude that the misnaming is a deliberate snub  … Brits eh and just when you thought it was safe to come out of the water … could be worse I suppose he could have attributed it to Kim Khardasian ! 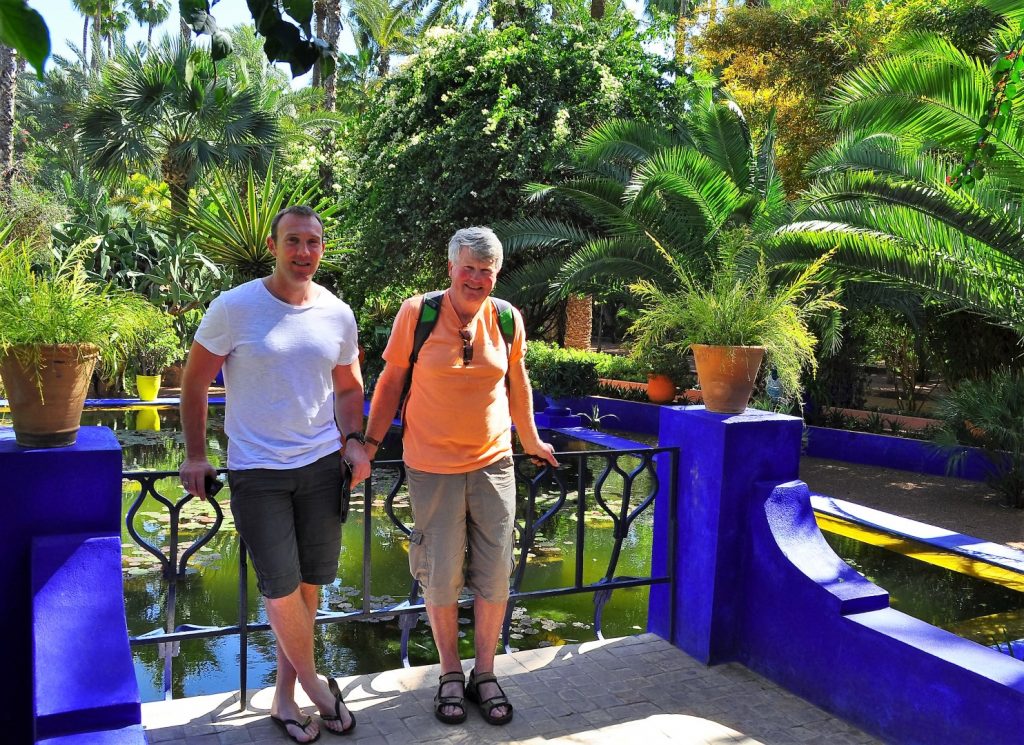 Visiting the Majorelle Garden in Marrakesh with my son , Kevin , March 2012

Today I spent the morning putting the giant gunnera clumps to bed for the winter as while the huge leaves are magnificent from May and really have a wow factor for visitors , they die messily and the leaves flop all over the place … not so bad if in out of the way places but they block passage if planted like a lot of mine are along paths . I cut and layer the leaves across the crown of the gunnera and make a parcel which looks nice but serves more importantly to protect the crowns through the winter as hard frost will damage them … in Spring the new crowns will push through the decaying leaves and for me it is a thrilling sight to see the fresh young gunnera leaves emerging for the new season .

Putting the gunnera to bed for the winter , October 2016

It is a nasty job cutting gunnera leaves back as they have stems as thick as your wrist and I sometimes have to use a saw to cut them , I used to just bend the leaves over but now the stems are too thick and they can rebound and send you flying … usually into water … as I said a nasty job but someody’s got to do it … is anybody out there listening ?! 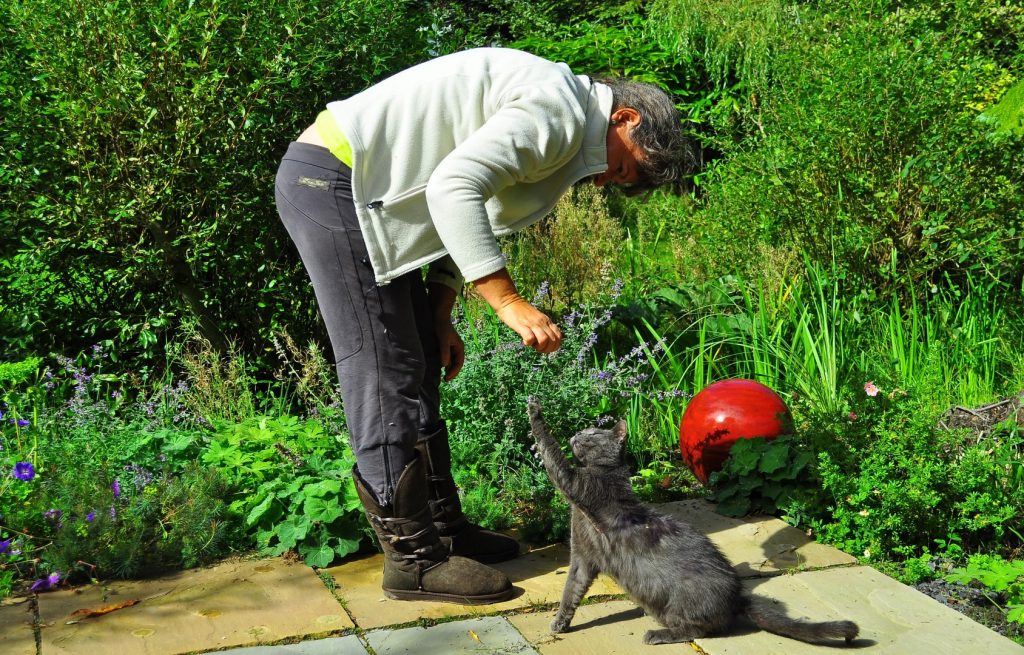 Gardening is easy when there is a cat to e played with ! September 2016

Anybody with a woodland garden to maintain will be familiar with the huge job in clearing up fallen leaves and this is another task that needs to be done regularly between mid October and the end of December … what did we do without leaf blowers ?! In the bad old days I collected the leaves in piles throughout the garden and then bagged them up where they eventually became leaf mold after a year or so in a dark corner and a tedious job it was but now every week or so I walk around with the leaf blower and stack the leaves throughout the shrubberies and under conifer trees where they will die down into mulch and also provide a home to overwinter for the odd hedgehog or two .

I always find it amazing to see where plants , trees and shrubs self seed throughout the garden either blown in from the surrounding farm land or dropped as seed by birds etc. but this pumpkin was a surprise in the lower garden . In May I had planted two silver birch and due to the wettish soil had raised them up a bit and rather than let the raised soil become a place for weeds to thrive , decided to plant them up with various geranium , mint and vinca cuttings which all thrived and grew into a weed suppressing canopy and in the middle a large leaved courgette trailed out across the bed into the surrounding grass and imagine my surprise when in late September I saw a large pumpkin nestled and hidden in the foliage … this was not a particularly sunny spot and was in shade for most of the day until the late evening sun and normally in Ireland you would need to grow this size of pumpkin under glass so obviously this was a right place right plant moment and this week I donated it to my neighbour , Sebastian . for Halloween ! 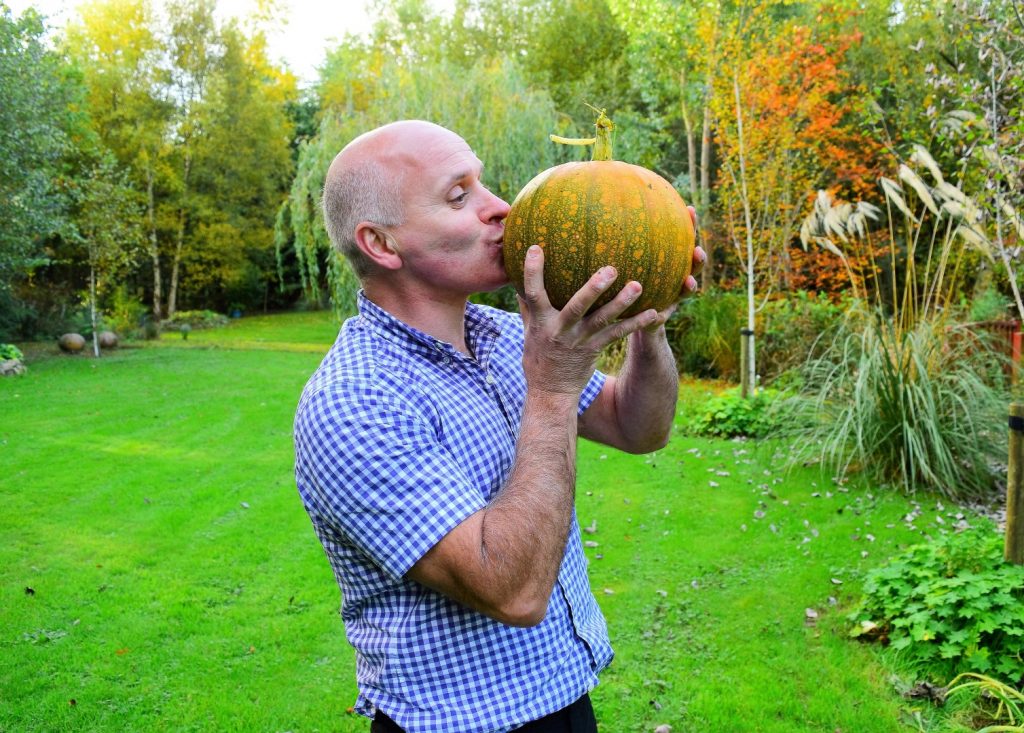 That is today’s soup sorted ! October 28th 2016 in the Lower Garden 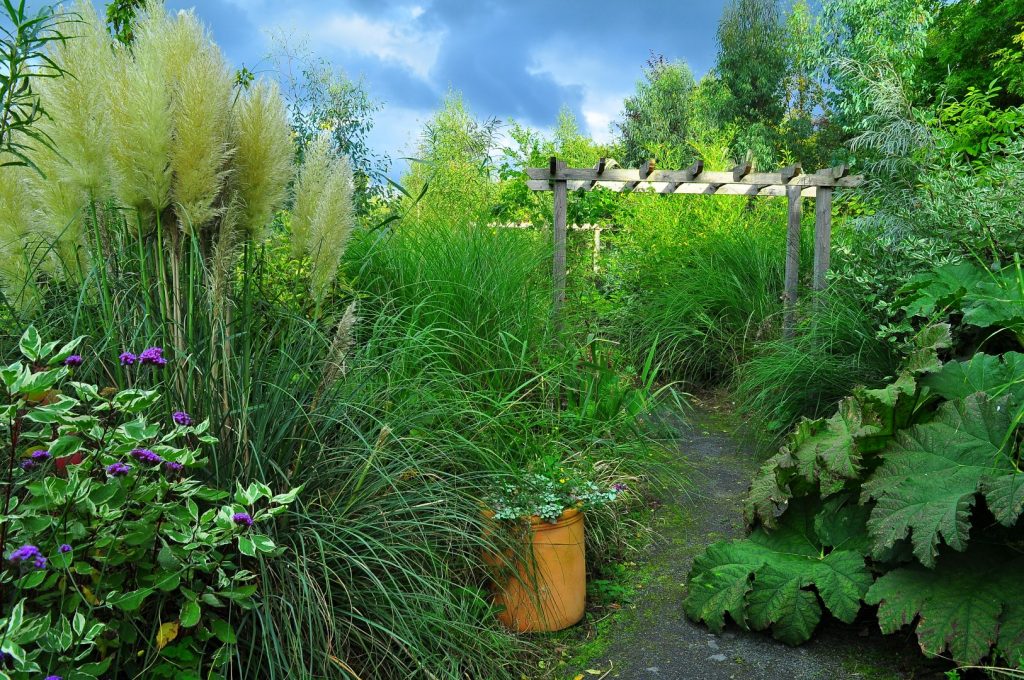 The grasses have done really well this year , October 20th 2016 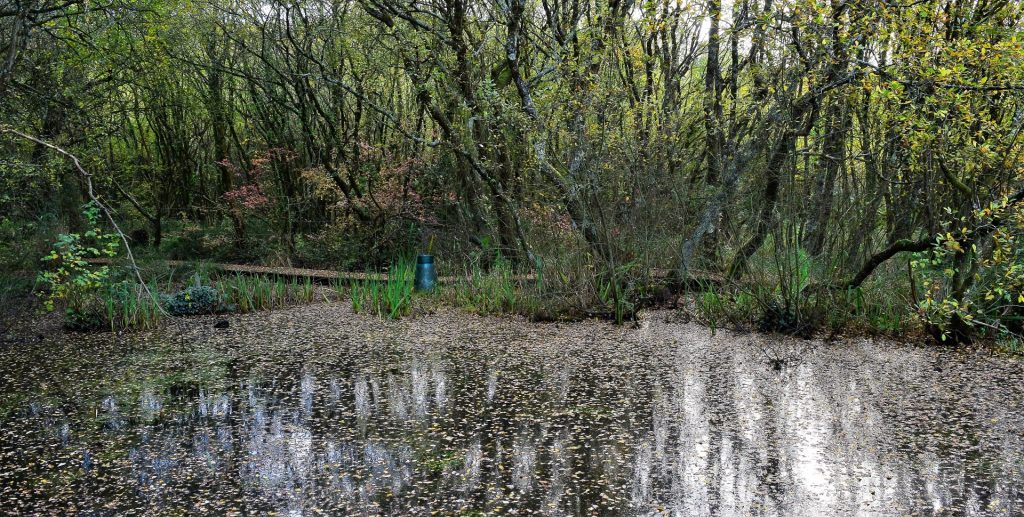