Even at the height of summer with all the lush exhuberant growth in the garden there is always room for pots or containers particularly if sited in shade … not total shade but dappled . Never use plastic containers as apart from looking awful tatty they heat up too much in hot weather and dry out the plants . 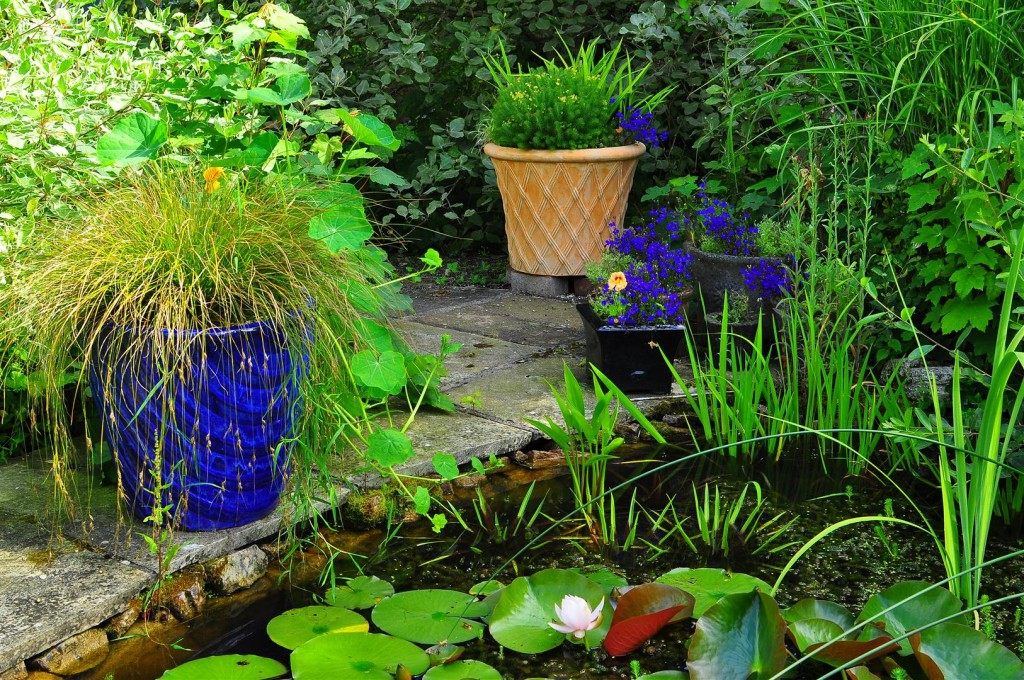 Nowadays all pots being sold are generally frost free , that is they take into account European weather conditions where winter frosts can freeze a pot solid for weeks and the days of cheap imported pots from the Far East , Vietnam etc. cracking into pieces are gone and you can buy nice pots even in the major supermarkets . 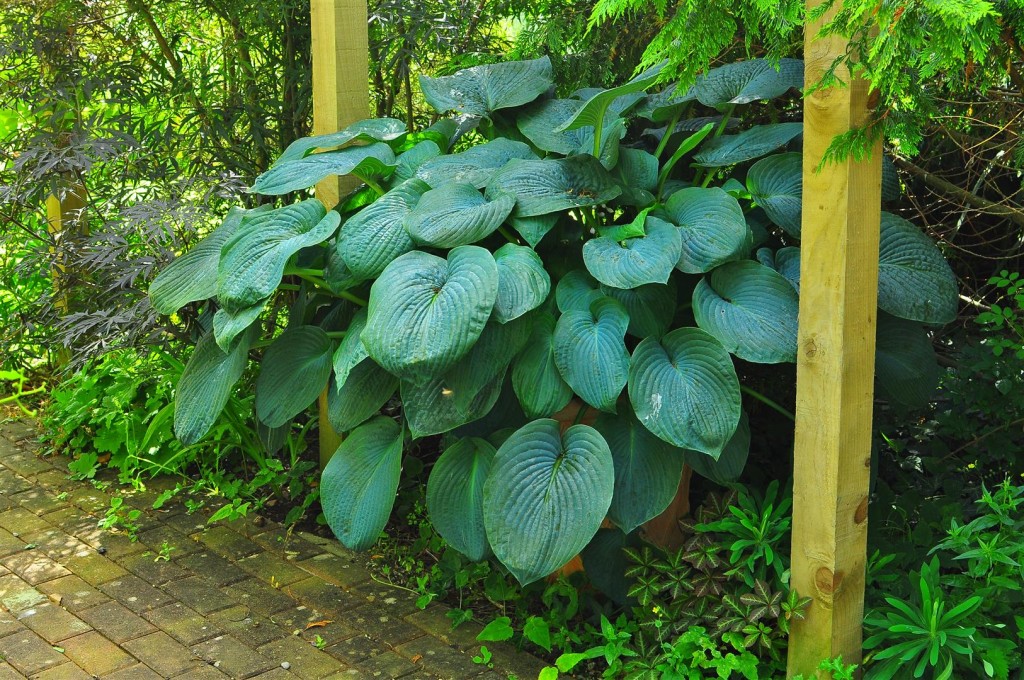 Hosta sieboldiana elegans July 9th 2014 …. and yes there is a pot in there somewhere !

In my view a solid well designed large terracotta pot from Italy is still the best , the simpler the better with the unchanged design going all the way back to Greek and Roman times in the Mediterranean  when pots were used for transporting wine and olive oil and in my dreams I see an old Tuscan olive oil jar or an ancient Greek  amphora having pride of place in the garden …. dream on ! 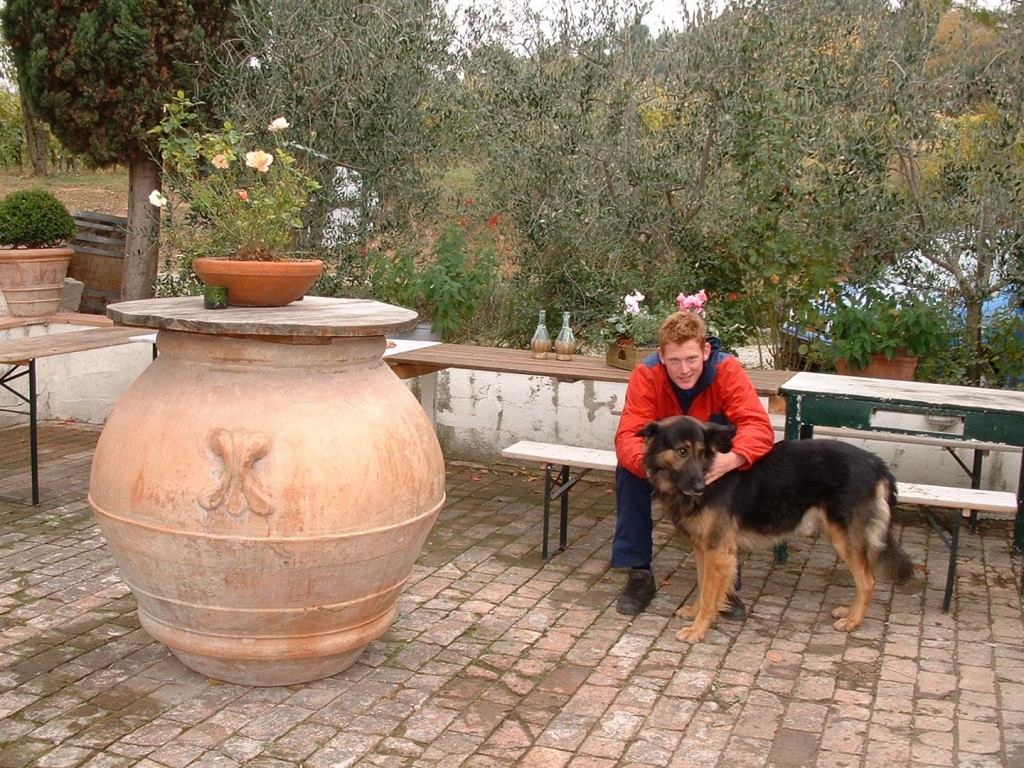 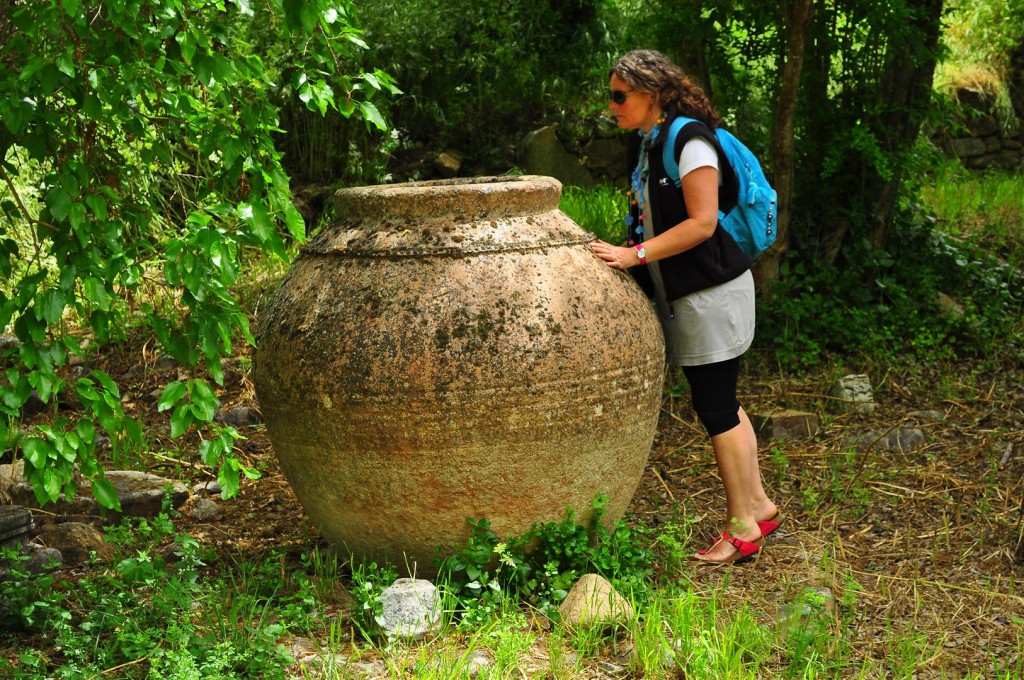 As you can see in the photographs the overall design of these olive oil storage jars is similar yet there is 2,500 years difference in their age …. The Tuscan jar photographed near Florence dates from 1950 ( my son, Diarm , kneeling beside it dates from 1983 !) while the ancient Greek amphora  from Aphrodisias in Turkey with Snezana peeping into it dates from 350 BC .

I generally go for three types of planting in containers (a) hostas for May / November with a second planting of primroses or pansies for winter colour ( these I take out in spring and plant in a woodland area ) (b) bedding annuals like allysum , lobelia , cosmos , trailing plants such as geraniums and nastortiums and finally a few containers or deep trays for alpines ….occaisionally I fill pots with box balls or euphorbia palustris . The alpine containers need a specific mix to thrive , a 50/50 mixture of compost with pea gravel topped off with a layer of gravel and these I tend to cover in winter in really wet conditions as the one thing alpines can’t abide is wet feet and they will rot and die off . For the other containers I use John Innes professional compost and always make sure that you place a layer of gravel or broken crockery at the bottom over the drainage hole so that the pot doesen’t become water logged in winter . 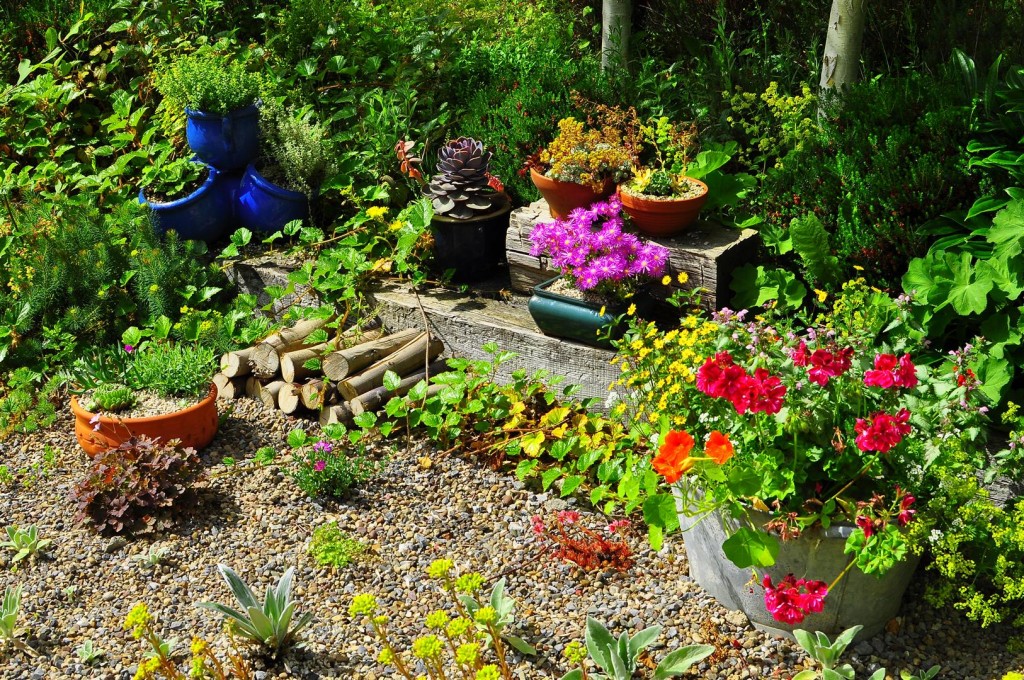 Pots with a mixture of herbs, alpines and bedding annuals July 9th 2014

A word of warning about hostas in containers …their roots will eventually grow too big  so at the end of every second season you need to take out the hostas , divide into three … replant the pot  and of course you can plant out the remaining hosta pieces in the garden .

There is no mystique about having a profusion of healthy plants tumbling out of containers as in the same way there is no such thing as some gardeners having  green fingers ….. anybody can have fabulous looking containers as long as you are prepared to invest a little bit of time every day to plant care and there is no excuse for sad sorry looking containers especially those close to the house where you can get to them easily … all you need is a daily routine of watering and a feed with a foliar tonic such as diluted liquid tomato fertiliser every week …. I have seven containers close to the front door and less than ten minutes every morning when each gets a litre of water keeps them in tip top condition which is not a huge price to pay for a guaranteed great display of flowers and foliage . 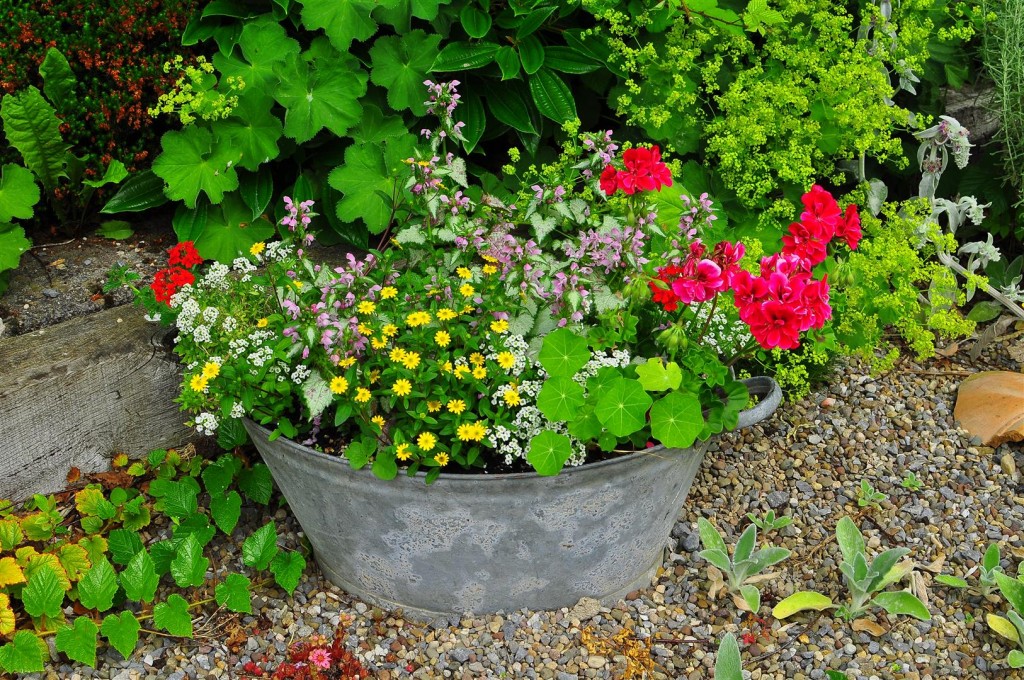 An old tin bath planted up with bedding annuals July 2014

Plants in containers are totally dependant on the gardener and like any relationship will thrive with a bit of attention … so get out there with the TLC !

We took part in the Tipperary Garden Trail Weekend on June 28th / 29th  and luckily the weather cleared up at lunch time Friday just in time to get last minute grass cutting and a general tidy up done before the visitors started to arrive at 11 am next    morning ! This is the third year that Petrovska Garden has taken part and all proceeds are for the Clonmel Lions Club . 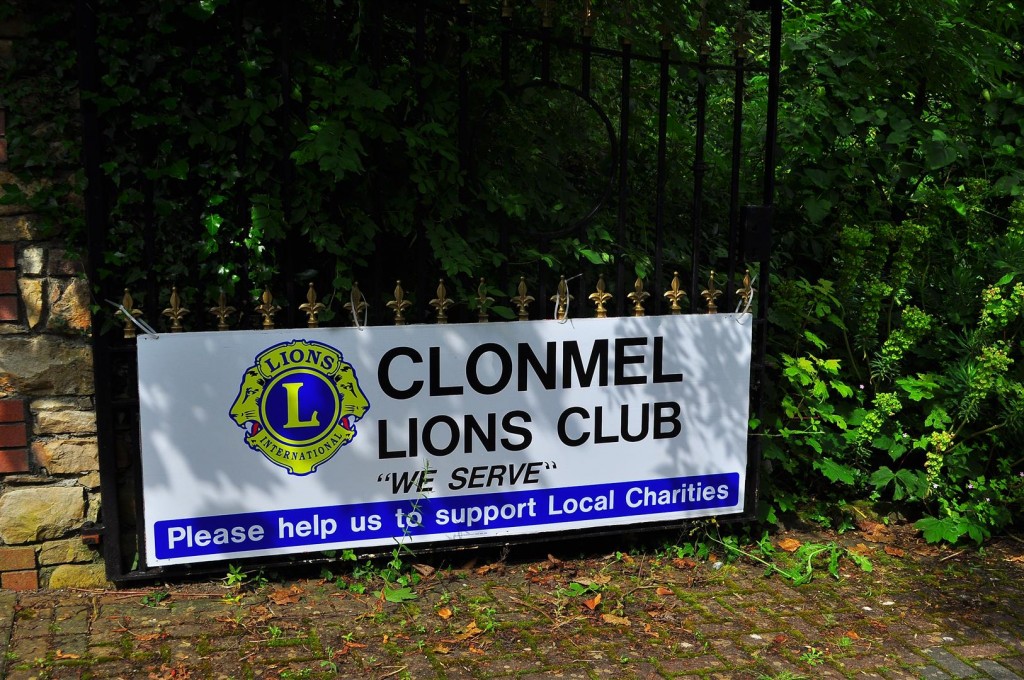 The major problem about opening a garden for a specific weekend is the scheduled preparation in the weeks leading up to the event … not the work involved but the fact that there is a deadline to meet and the fact that all that preparation can be ruined by the weather either in the last few days when last minute tidying up, grass cutting etc. can be disrupted or of course the ultimate bad luck if the weekend is a downpour and nobody turns up but we have been lucky over the past three years as the days were sunny and fine .

The big plus of an open weekend for the owner gardener is that you get to meet and chat with such a variety of people and so it was this weekend with lots of interesting people to meet and over the course of the two days over one hundred and seventy people visited , most of them first time visitors to the garden , some were long term keen gardeners , others just beginning their own garden adventure  and reports back were positive with some great conversations and swopping of tips and bits of advice .

Terry and Beth Hanna were among the visitors …. Terry founded the Genconnor Garden Centre back in the late 1980’s and  in the early days supplied plant gems not normally found in Ireland at that time  . I have been buying plants from Glenconnor for over thirty years beginning with my first garden in Rosslare  and I have continued with this garden and although plant supply now to today’s public is mainly of the very instant gardening type as people demand that all plants should be in flower , Glenconnor plants are always healthy and well priced   …Terry remarked I can see now why you bought in threes and fives ! 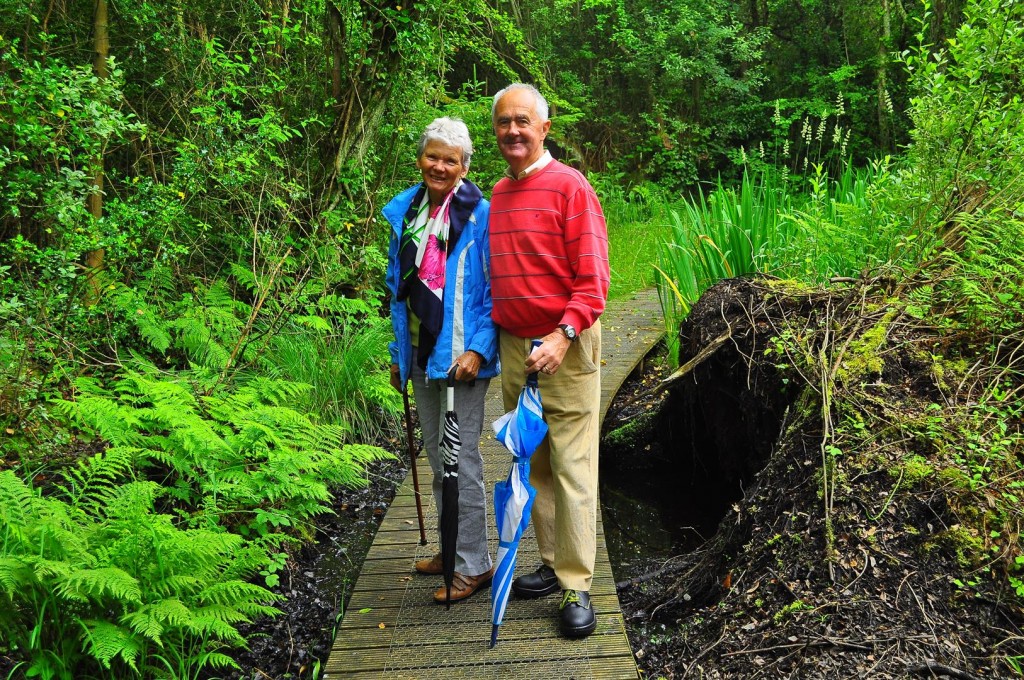 This year I could refer visitors to the web site wwwpetrovskagarden.com where they could see for themselves just what went in to making the garden and the condition of the wet swamp area that was the entire lower field when we started …. again the quote  if we knew then what we know now !!!

As usual the Clonmel Lions Club provided great back up and were in the garden from early morning each day which freed me up for front of house duties to introduce the garden to each group and get them on their way through the garden  while Pascal Mansfield and Geraldine Ryan baked and brought a car load of cakes , trays of delicious apple crumble and the best pear and almond cakes in the world ! Geraldine stood in for the absent Snezana ( on duty in Crimea with OSCE ) as hostess and made endless pots of tea and coffee ….. and behind the scenes washed up everything with no fuss …. so a BIG thank you to the Lions Club for all their support . 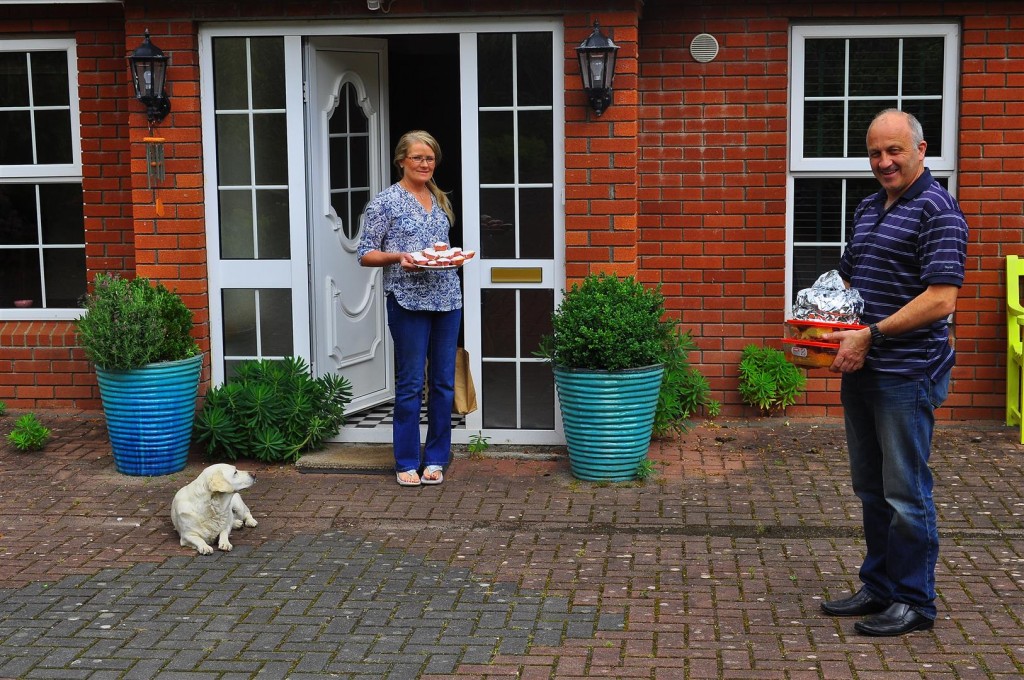 As usual even with all the advance publicity there were people who for various reasons could not get in a visit during the Open Weekend and this past week has been busy with visitors who wanted to support the initiative retrospectively and one such was local Clonmel artist , Mary Brigid Mackey , a former neighbour of mine from back in the days of Barron Park who last summer spent a day in the garden painting her favourite scene from Petrovska Garden and brought the finished painting around for me yesterday to see . 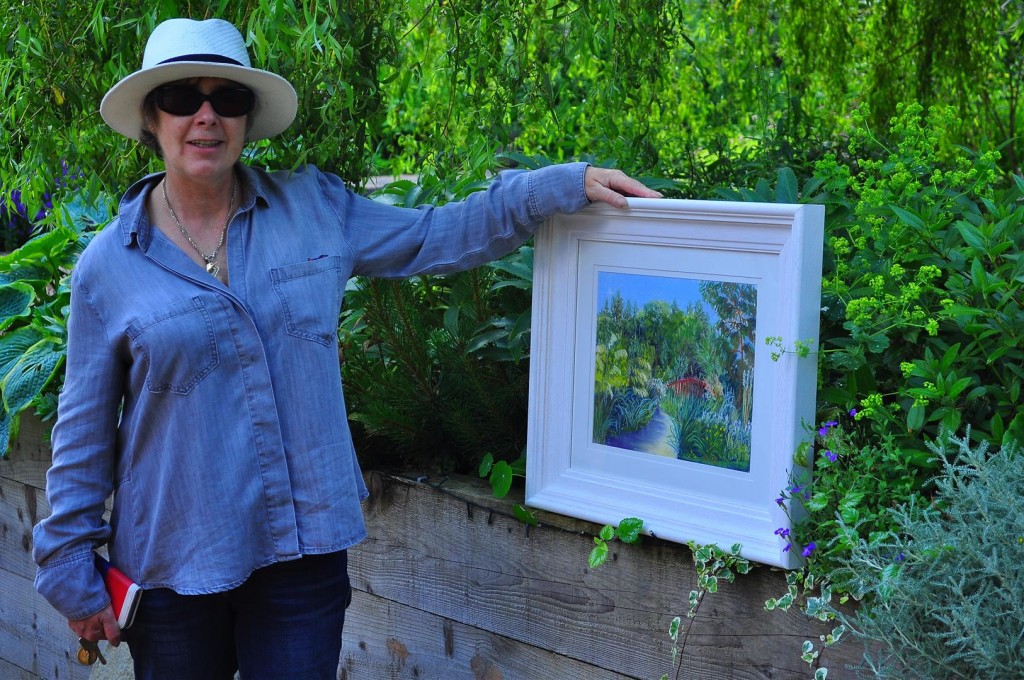 Mary Brigid specialises in landscape painting , is available for private commissions and her web site features  a selection of her work and contact details   www.marybrigidmackey.webeden.co.uk

I spent a good part of this week in the garden lazing around with work that although not on my schedule for the Open Weekend still needed to be tackled and which unlike the past few weeks if I couldn’t finish it today well there was always tomorrow !

The woodland stream needed to be cleaned of all the hogweed and water cress which loves it down there but which quickly takes over and you can hardly see the water …. up to my waist in swampy water with my feet getting stuck in the mud I suddenly felt a little pinch on the back of my hand which I thought was the usual nettle or briar but later while still in the water I looked at the hand and there was a dirty big leech settled in for a long slow liquid lunch at my expense …. the last time this happened to me was back at my grandmother’s stream in Ballintaw in County Limerick when I was eleven and I screamed so hard then they heard me in the next parish …. this time of course I am an adult with fifteen years experience in the Balkans behind me so no big girl’s blouse behaviour ….. still two of my neighbours heard me and came rushing down the garden !

I mentioned in previous blogs the dangers of introducing invasive plants to water and this weekend I spent a day lifting typha , the common bull rush which I had transferred to several of the natural water areas and which has romped away wherever I planted it….. this plant however unlike the dreaded parrot feather is easily managable and is a terrific foliage plant with long leaves topped with the familiar reed which plant arrangers love as it gives height to floral arrangements .

As a child we used to use it in games of cowboys and Indians and it had the added bonus that you could douse the top in petrol and use it as a torch …. If our poor mothers only knew !!

The basket Moses was floated down the Nile on was made from bull rushes according to the Bible story .

If it is happy in its position the bull rush multiplies every year but in this case it was blocking the view of some lovely water lilies I had planted so I removed three wheel barrows full … the roots pull away easily and I already had dug out new planting places along the bottom of a two metre wide rain water drain in the lower garden which fills up every winter and last year I successfully transferred a first batch of typha and they are doing  really well and providing a dramatic backdrop  along the bottom of the bank   where I have a long established colony  of hostas and perennial arum lilies  . 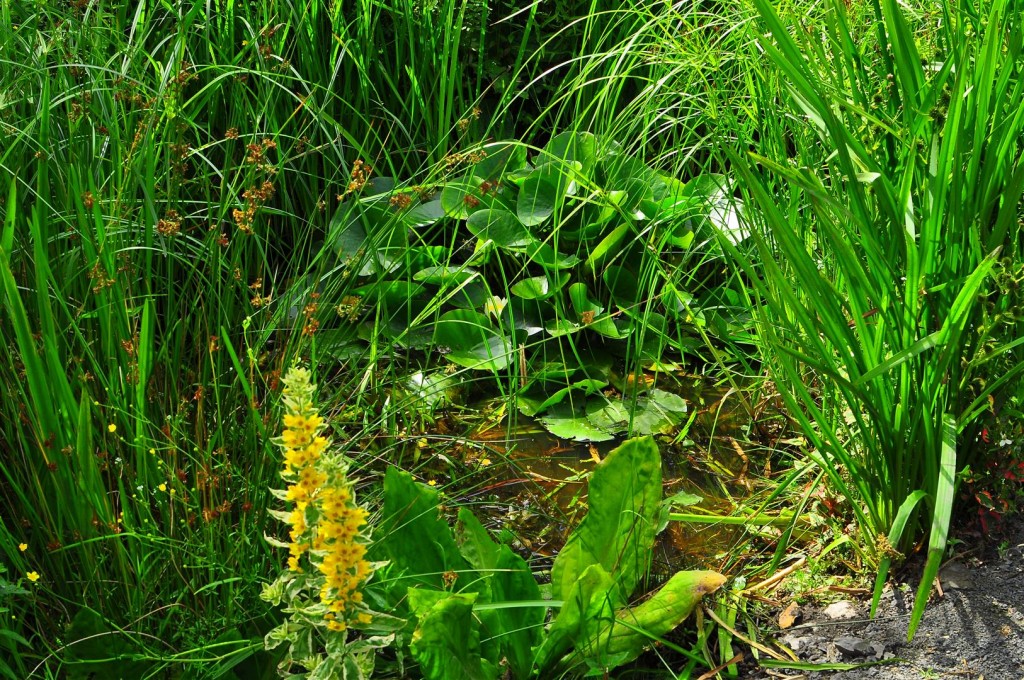 Plants can thrive in one area and a few metres away the same plant can struggle perhaps because of a wind tunnel effect , water logging / dryness …whatever … but you never give up and my way of dealing with it is to move a plant , shrub or tree if it hasen’t done well after two seasons in it’s location as I find persevering with it in the same place rarely works …. try and try again !